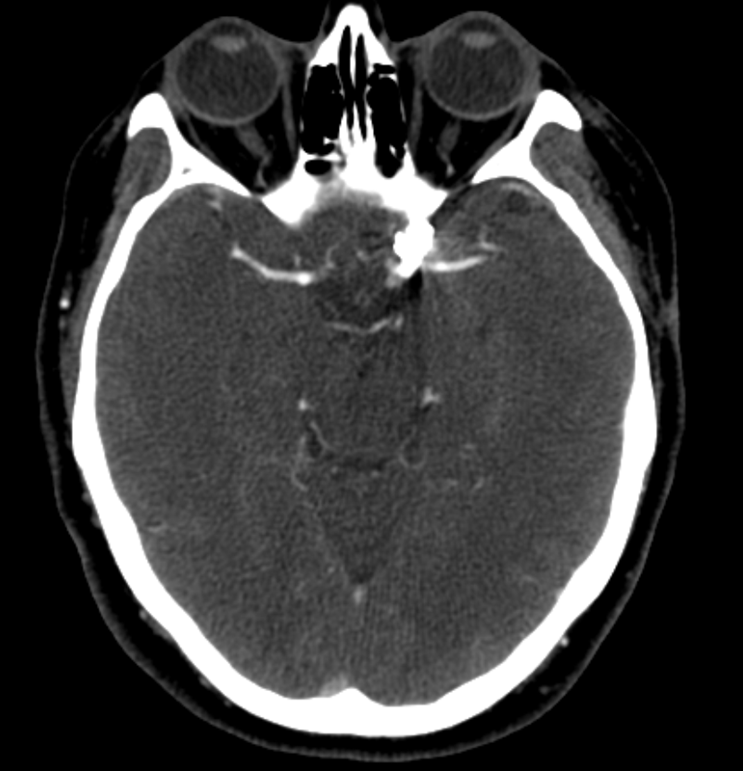 How about that for a masterfully reconstructed CTA!  No clip artifact, definite aneurysm recurrence 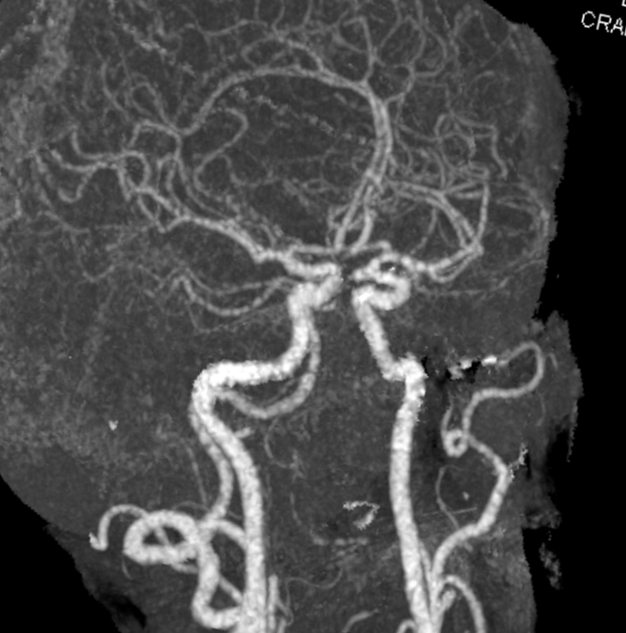 Despite relatively small caliber of radial artery (white), we placed a sheath anyway. Going for the ulnar (black) probably would have been a better idea. We gave the usual heparin/verapamil/nitroglycerin cocktail and had good flow. We always keep pulse ox on thumb of hand with radial access. 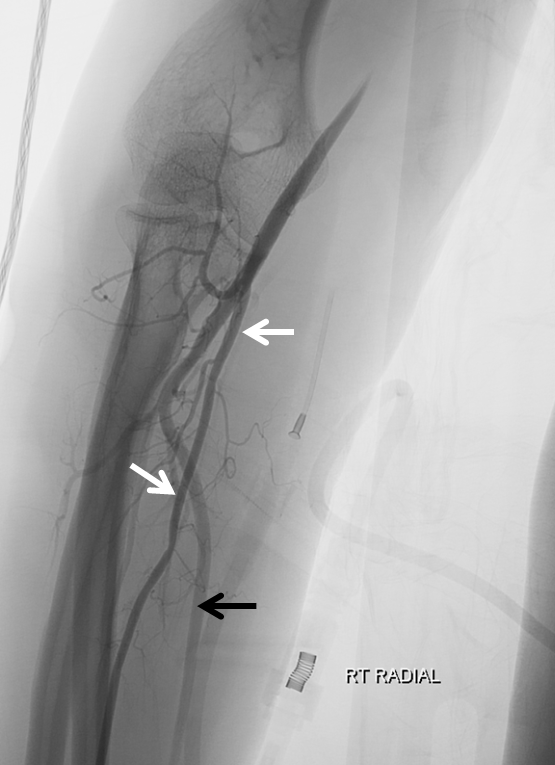 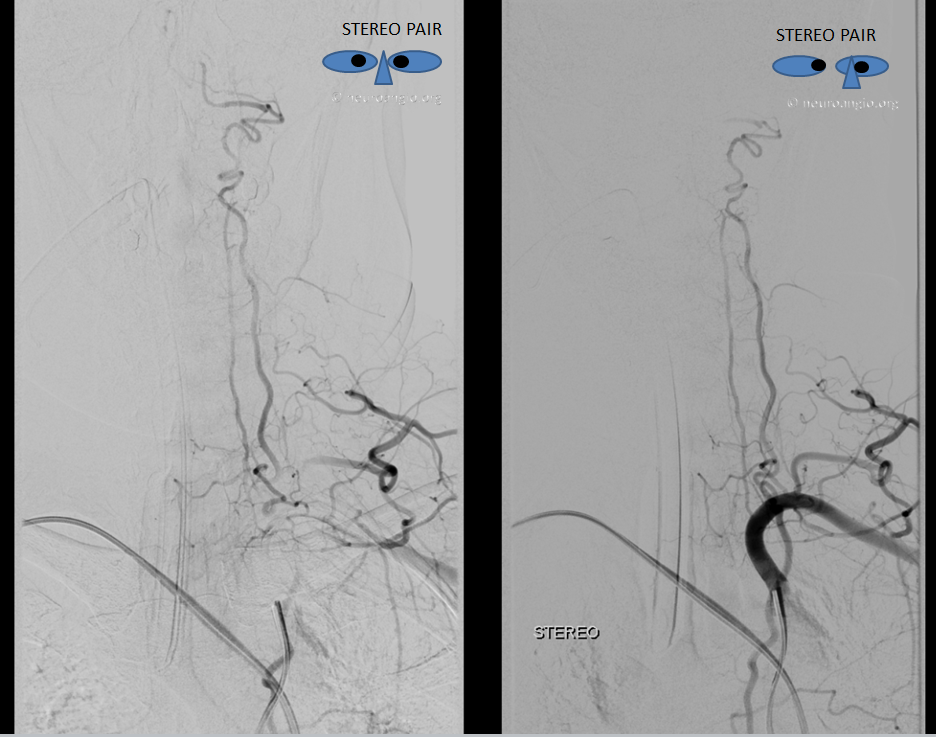 As we catheterized the right CCA, the 5F Simmons 2 catheter was becoming more difficult to manipulate — harder to push and pull, less precise on turns.  A sure sign of spasm.  We completed right carotid angio, showing this small cavernous aneurysm 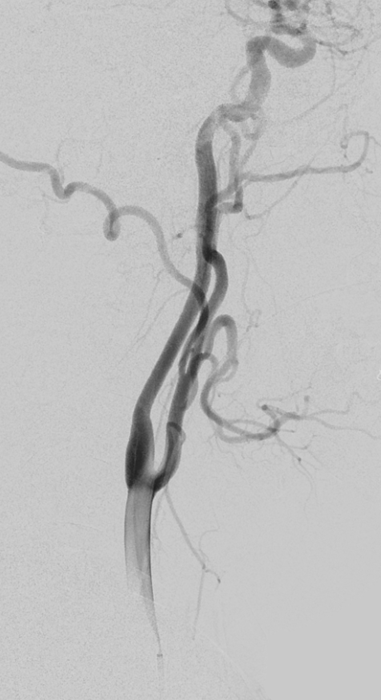 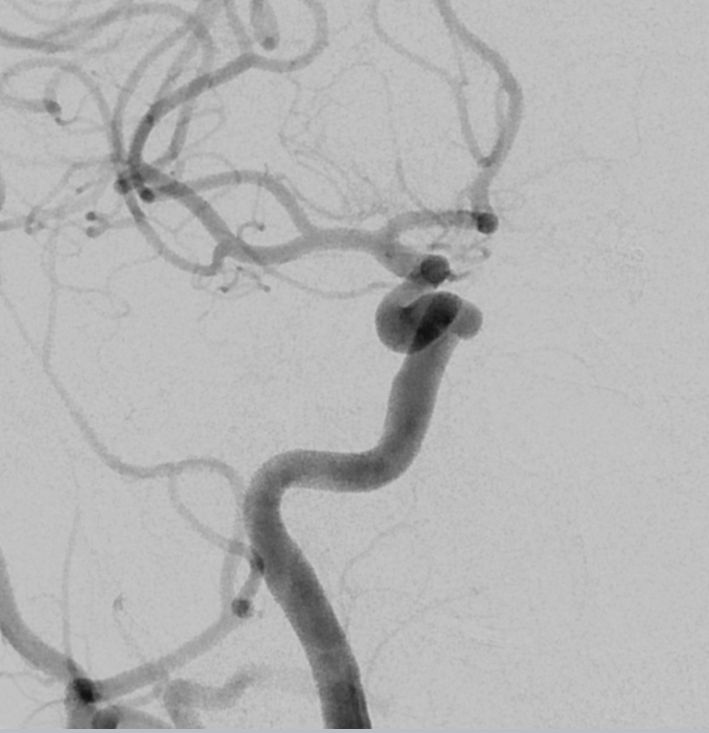 As mentioned before, we always keep pulse ox on thumb of hand with radial access. Suddenly, we lost the reading.  After going through a minute of wishful thinking, we removed the 5F simmons — there was moderate resistance to removing it, but nothing extreme.  The pulse ox came back after a few seconds, confirming spasm.  Because ulnar was widely patent, loss of pulse ox tracing meant that flow issue was proximal to ulnar/radial split.

Radial sheath backbleed pressure was diminished.  Injection confirmed severe brachial spasm (black arrow at worst spot).  Notice that radial (white) is still patent and pretty much free of spasm.  This is likely because the cocktail injection reached this area but did not permeate the brachial artery.  So, after all it was not, in my view, a problem of too small a caliber of radial artery but of brachial spasm in a relatively young patient. 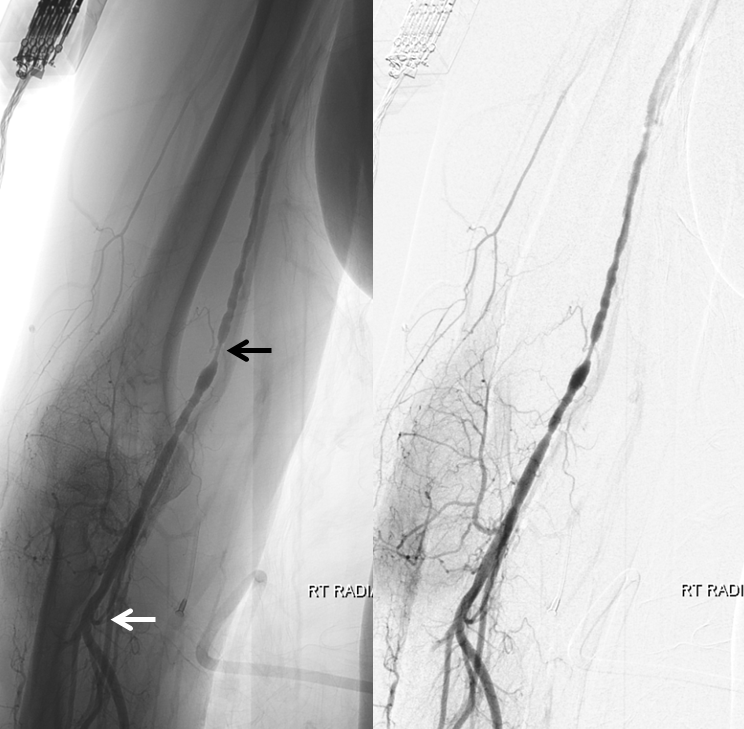 Options?  There are several.  We could have given more cocktail into the subclavian when we first got there, although there was no sign of spasm initially. Wait andgo back up the brachial to give the cocktail then.  However, given that we would have needed a larger guide to Pipeline left PCOM than the 5F diagnostic Simmons 2 which caused spasm in first place, we decided to abort and go femoral.

We took out radial sheath as soon as decision to go femoral was made, and placed a TR band.  Only 8 ccs of air were necessary in the band.  After getting femoral access, we catheterized the right subclavian and got this runoff, which showed that the right radial was closed (white arrows).  Not great, of course, though there was plenty of flow to the extremity.  We removed the band 50 minutes later. 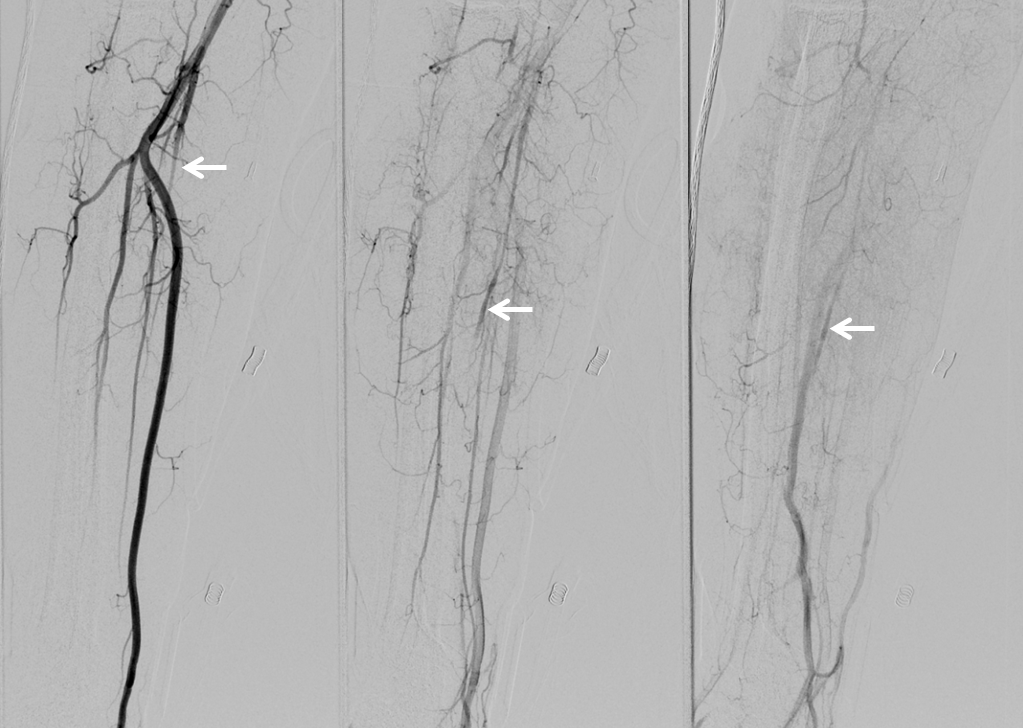 Now back to the angiogram. Right vert is clean.  For some reason, this patient’s pterional crani was never closed. 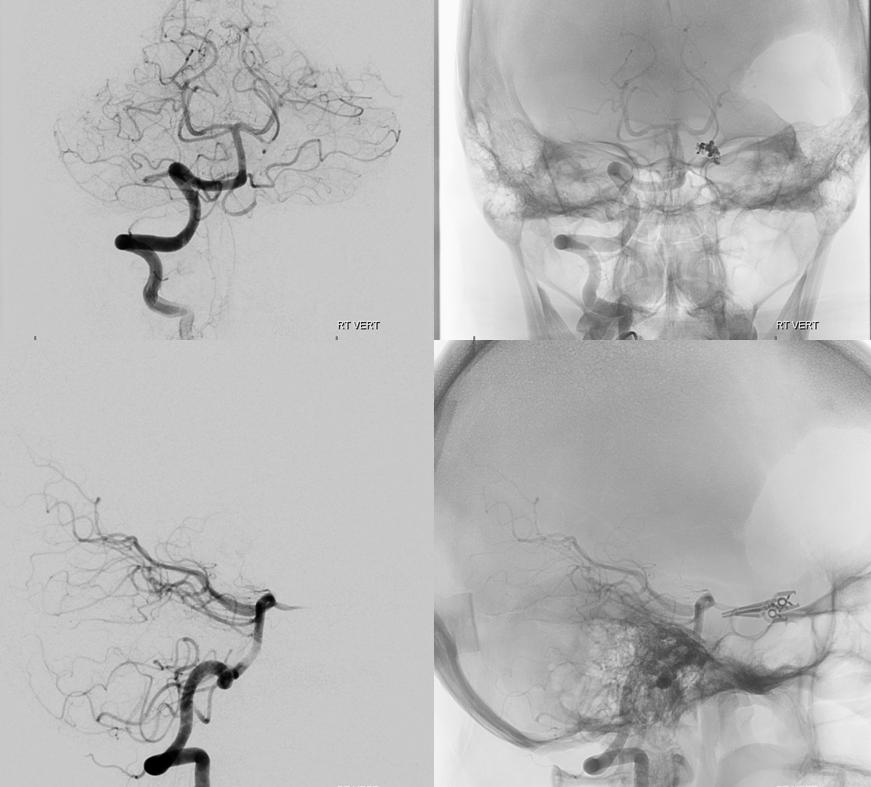 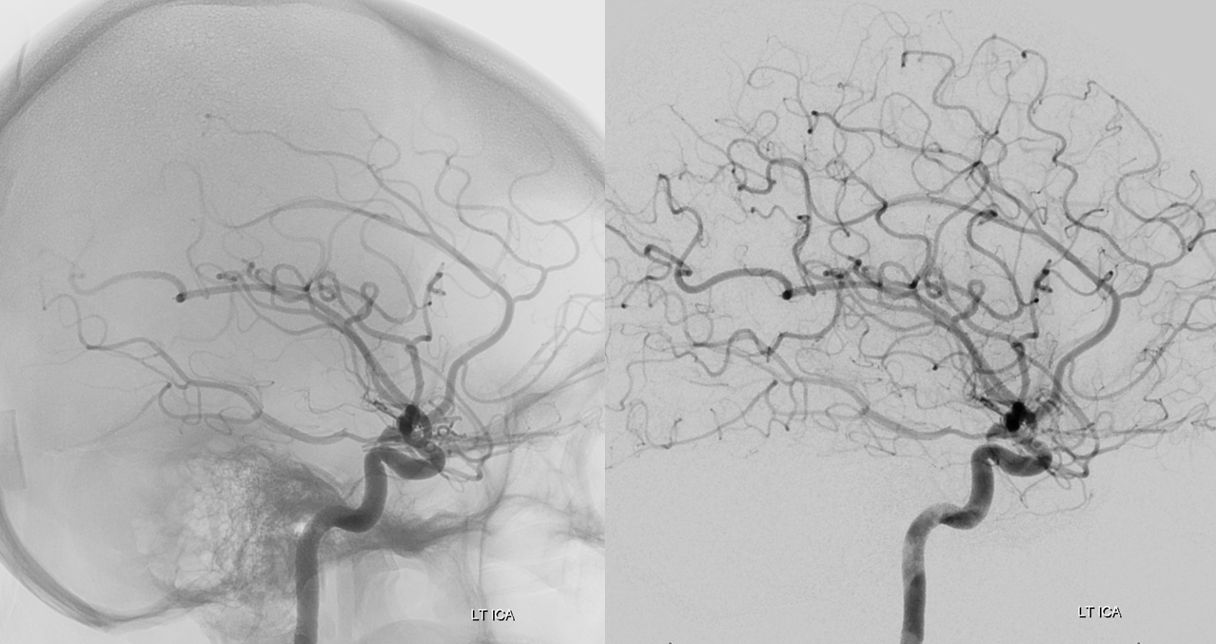 Two PEDs are placed, 3.25×10 and 3.75×10, in overlapping manner.  Personally i am extremely uneasy about acute aneurysmal CNIII and like to make sure we have good pipeline coverage of the aneurysm.  In this case, the PEDs are placed so that the overlap is at the aneurysm alone, with single coverage of the choroidal.  Notice increased overlap density (white arrows). Black arrows show ends of Pipeline construct.  We very much prefer to keep these constructs only as long as necessary. For example, there is no reason here to either cover the ICA bifurcation nor to extend the construct to the ophthalmic segment 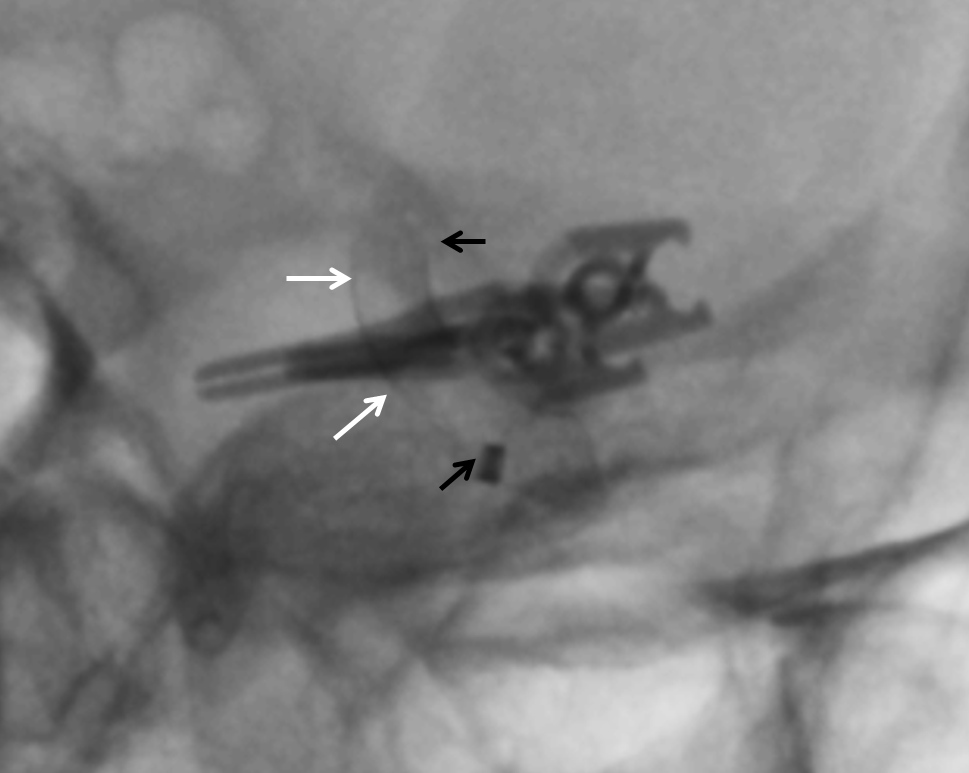 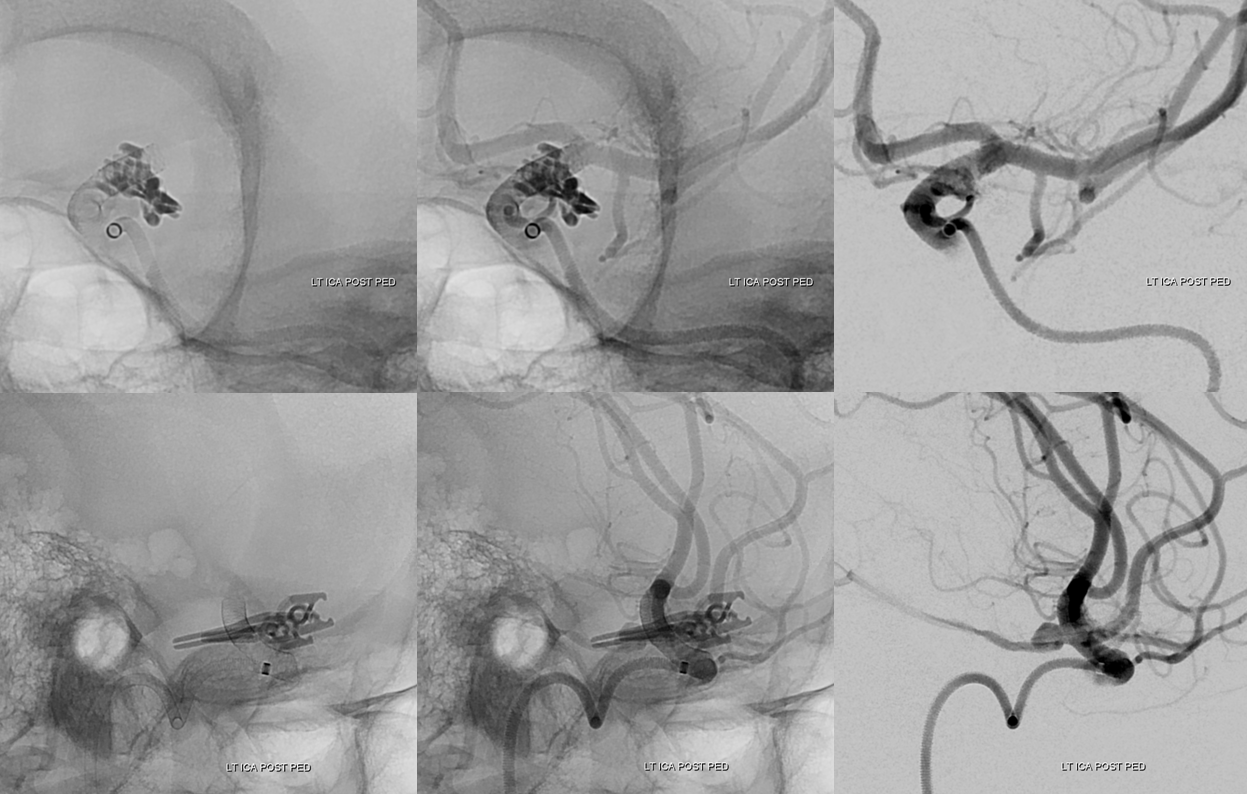 Lateral projection post PED views show excellent coverage with contrast stagnation in the aneurysm, as was very much desired.   The choroidal is open 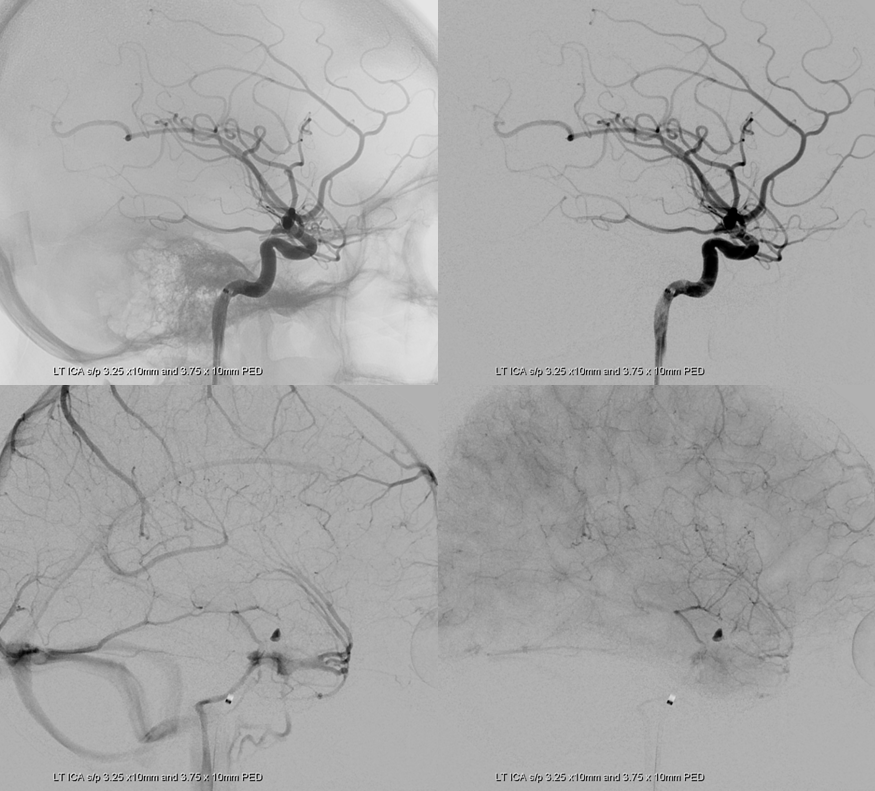 Here is an awesome DYNA CT view.  You can see the region of double-pipeline overlap between white arrows.  There is a significantly strategically increased amount of metal coverage at the aneurysm neck 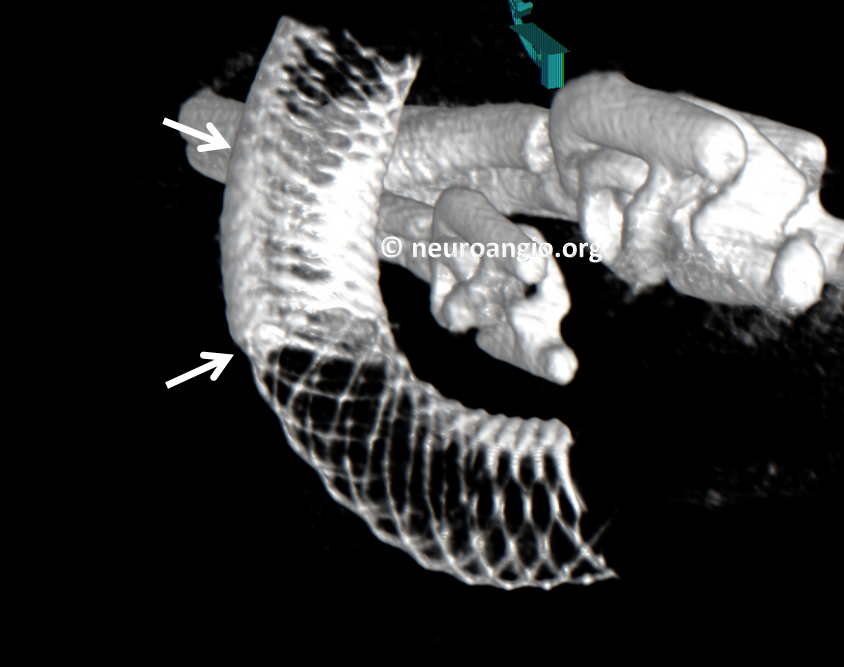 Finally, at the end, we went back into the right subclaian. Fortunately, the right radial (white arrow) is now open 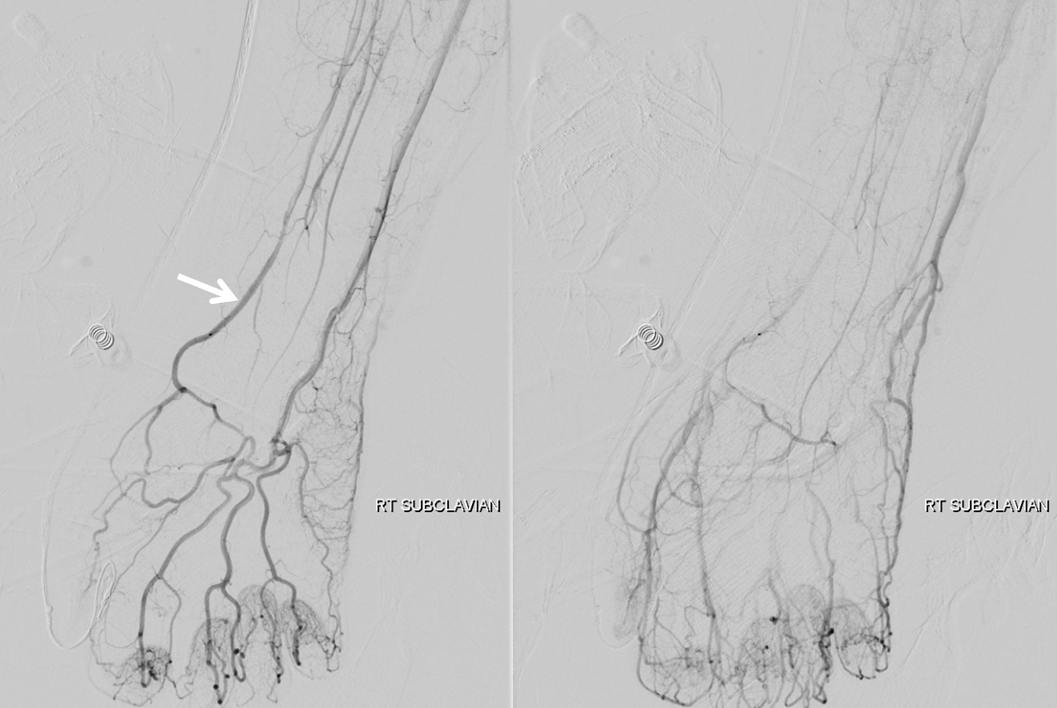 So, a few teaching points

1. Strategic placement of Pipelines to maximize coverage of desired segments and minimize coverage elsewhere — achieved by using multiple overlapping devices, as is our strategy

2. Various learning points pertaining to radial access as above

3. Knowing when to covert to femoral

4. It is a BIG mistake not to follow clipped aneurysms for life.  All treated aneurysms should be followed, regardless of modality or apparent initial treatment success.  Clipped aneurysms recur as well and this patient was super-lucky to have gotten a warning in form of her CNIII palsy