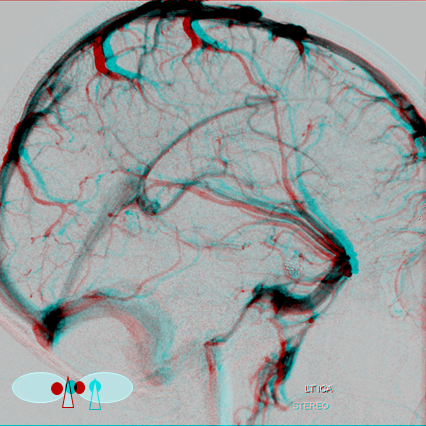 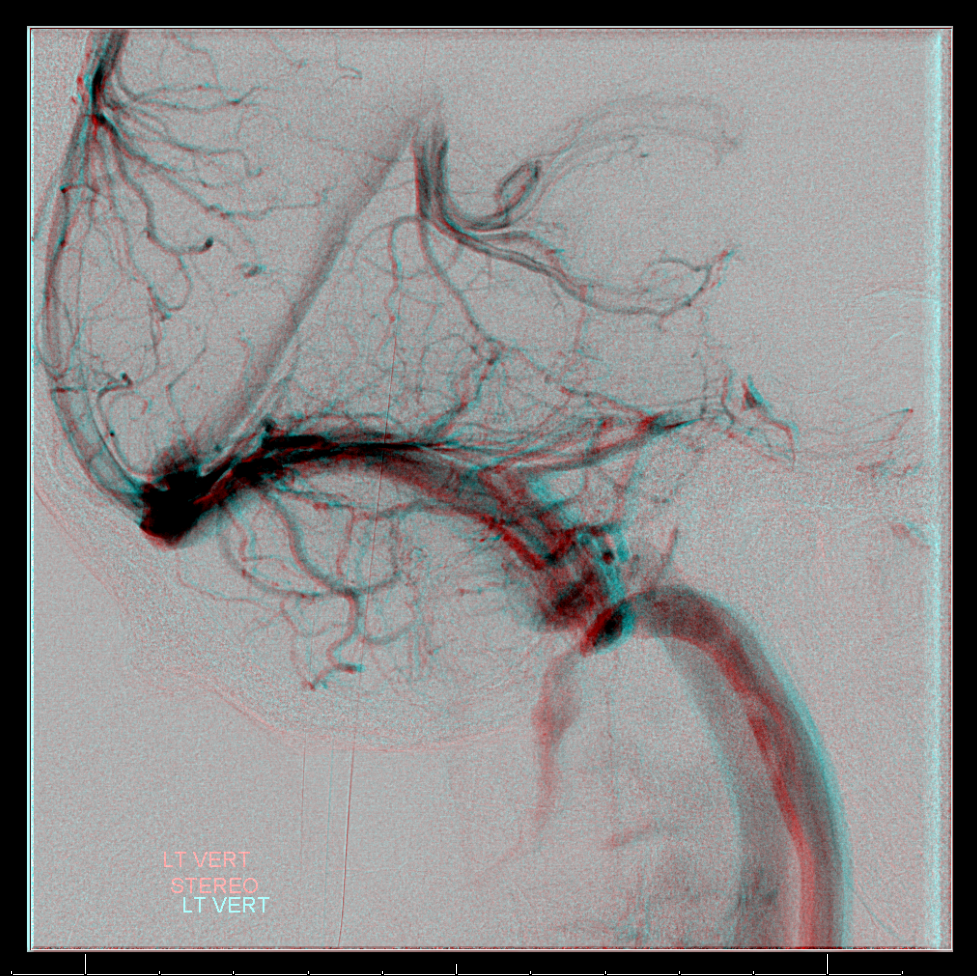 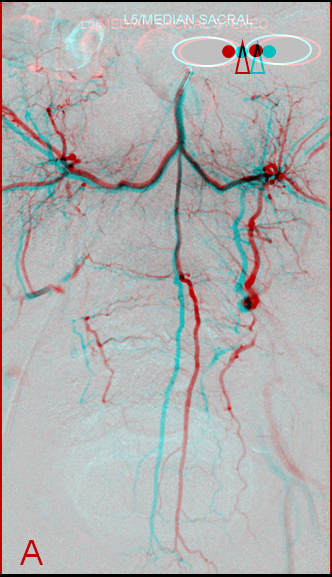 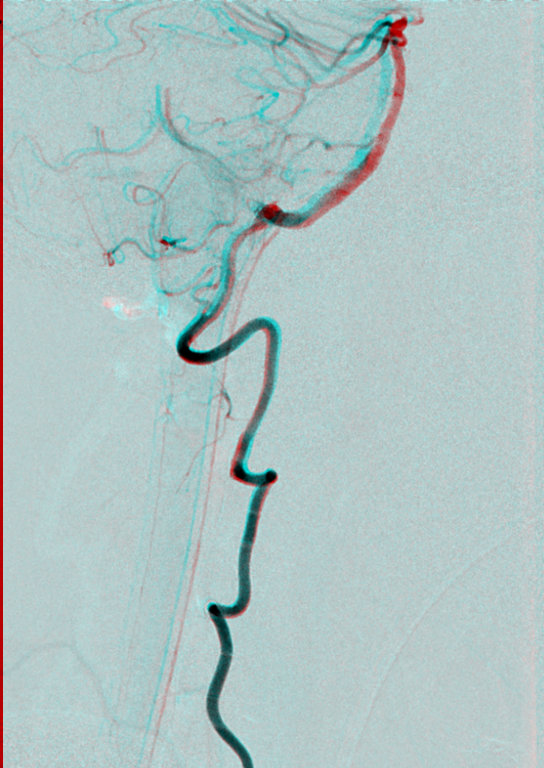 Stereo views of angiographic images provide an entire world of depth perspective.  This world is unknown to most interventionalists, yet it is readily accessible.  It takes less than a minute to create a pair of angiographic stereo images and even less time to view them.  With practice, viewing in stereo, without special glasses or equipment, becomes routine.  The advantages of seeing in three dimensions the normally two-dimensional angiographic images are substantial and complement the well-utilized rotational angiographic capabilities. 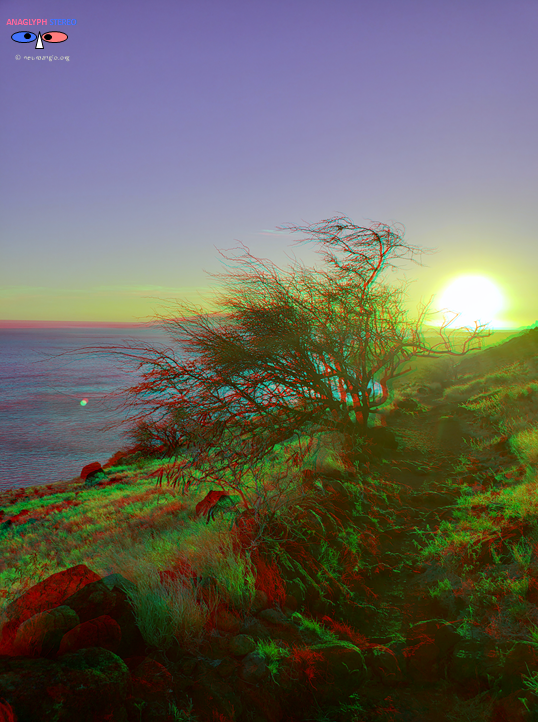 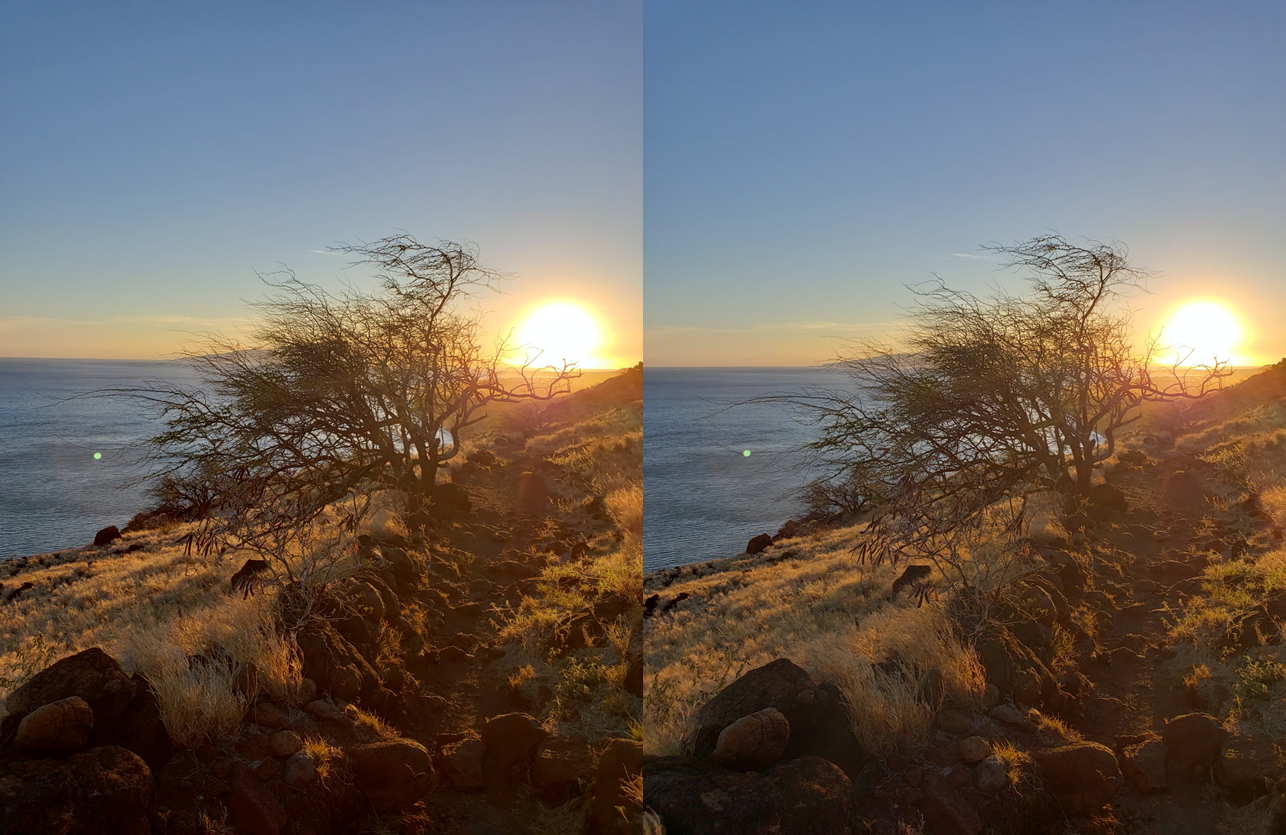 There are many websites which talk about how stereo images are made and processed. Fundamentally, we see in stereo because our two eyes see slightly different pictures, which the brain integrates to create a sense of depth.  All stereo pictures and movies work on the same principle. The raw data consists of two pictures which are taken by two lenses separated by about the same distance as our interpupillary distance.  These two images then need to be shown to each eye separately.  If one eye only sees one picture, and the other eye another, it will be equivalent to how we normally see the world, and will result in a perception of depth. There are many ways of doing that trick — the images can be polarized so that one eye sees horizontally polarized images and another vertically; slightly better method of circular polarization; color encoding which is the anaglyph (red-blue, red-cyan etc) methods, prism glasses, and others.  All of these have advantages and disadvantages.  Currently, the best method for overall effect is polarization, which is what you see in IMAX or Real3D movie theaters.  The disadvantage of polarization methods is that they require expensive special equipment, and more importantly cannot be used on most regular computer or flat screens.  If i have a stereo image on this website i cannot show it to you that way.  You have to come to a special auditorium or have a stereo TV.

So, how can i show you stereo. Two main ways — cross-eye and anaglyph.  The cross eye view is the most basic — show the stereo pair images side by side.  You have to cross your eyes so that left eye sees right image and right eye sees left image.  When the two images fuse in your head, you see stereo.  It sounds weird and it kind of is.  However most people can learn how to do this. Once you do, you can see stereo images anywhere, in real time, without processing etc. Its a big advantage.  I urge you to try.

Here is a standard cross-eye stereo

The second method is anaglyph — the red and cyan glasses one.  It is a very old way of seeing stereo and, in my opinion, the second best way (after cross eye) to view stereo angiographic images.  Its main disadvantage — inability to faithfully reproduce color images — does not apply to black and white angios.  The advantages are many — it can be seen on any computer or auditorium screen, from any angle, anytime.  It requires no special projection equipment.  It does not loose brightness as much as polarized images do.  For this reason, most of neuroangio.org images are shown in stereo as cross-eye pairs and anaglyphs.  All you need to see them is a pair red-cyan (not red-blue) glasses.  You can get a comfortable pair that you can wear over your existing glasses if need be for under $10.  On the budget side, paper ones go for $8 for 50 pairs.  It is truly accessible to everyone who has a screen.  Here is the same stereo in anaglyph 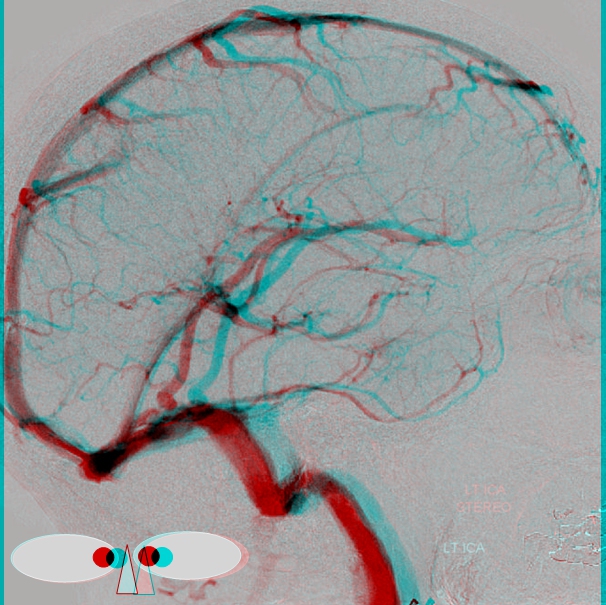 There are some overall limitations of stereo.  First, it is inherently discriminatory to those who do not have full binocular vision.  Anyone with a single functional eye unfortunately cannot see in stereo in life or on screen.  Our brains can compensate and develop a sense for distance even when only one eye is functional based on totality of life’s visual experiences and the immense brain computational and interpretation powers.  It does not work on stereo pairs.  The second limitation is that it does not give an exact sense of depth.  Just like most our brains cant tell if something is 20 or 21 meters away exactly, so is stereo frequently not very quantitative in terms of depth.  Sometimes this makes images look grotesque but it does not prevent us from appreciating some kind of depth.  It is a problem when exact information is required – which is why stereo cannot (yet) be a substitute for say medical navigational tools that often need volumetric imaging.

How do we create angiographic stereo images. Very easy.  Just do an angio, tilt the tubes 2-6 degrees (depending on how much depth you want) in the same plane as our eyes would see it (meaning LAO or RAO for either frontal or lateral tubes) and take another image, like this

Don’t change anything else except for tube rotation.  Don’t move table, don’t zoom in or out, don’t move detector closer or further away, etc.  Just move LAO or RAO.  Then put the corresponding images side by side and you have a stereo pair.  You can view it in cross-eye mode or use any of dozens image processing software applications to create anaglyphs.  Click here for a simple and versatile one.

The anaglyph sense of depth varies with how far you are from the image.  The further away you are, the more depth sense there will be for angiographic images.  Thus, images separated by 2 degrees or so are good for presenting in auditoriums, while 5-6 degrees are good for looking on your computer screen. More than 6 degrees is too much.

Stereoscopy is very underutilized in anatomy teaching and in neurointerventional labs. We routinely use stereo pairs to help us better understand what’s going on and plan therapy.  The purpose of this page is to encourage you to do the same.

Below is a gallery of stereoscopic images.  All of these are from cases elsewhere on neuroangio.org The images shown here are visual art gallery to encourage use of stereoscopy.  You will see that most pages on this site have stereo images as well.