Any creature with a trigeminal nerve has a trigeminal artery, which has as much right to life, liberty, and pursuit of happiness as facial or hypoglossal, for example.  Which is why the adage “Persistent” is a misnomer.  Yes, we all call it that, but it is important to recognize that this term is a product of an earlier, incomplete understanding of vascular embryology.   Although the trigeminal is usually below angiographic resolution, it nevertheless exists in everyone.  It is seldom the vessel selected by development to serve as an intracranial anastomosis between the anterior and posterior circulations — even the more usual PCOM is far from constant, and subject to the important embryologic variation of the fetal disposition.  The great Lasjaunias considered the PCOM to be an integral part of the anterior circulation (caudal ramus, see dedicated Neurovascular Evolution page).  However, some have challenged that notion on the basis of certain internal carotid artery variations that do not seem to conform to Lasjaunias’ model, and proposed that the PCOM is in fact an anastomotic vessel, like the trigeminal.  This, to me, seems to be at odds with the nature of the trigeminal artery as the vessel of the first branchial arch, which seems to have no correlate to the PCOM; I have no proof for either idea, but love to digress, as happened just now…

Here is an example, also found on the Neurovascular Evolution page; the “classic” trigeminal (green arrows) extends from the basilar trunk between the AICA and SCA, to the MHT, and is associated in this case with hypoplasia of the PCOM.  Essentially all vascular variants are associated with a slightly increased incidence of brain aneurysms, as evidenced by the coil mass (brown arrows) 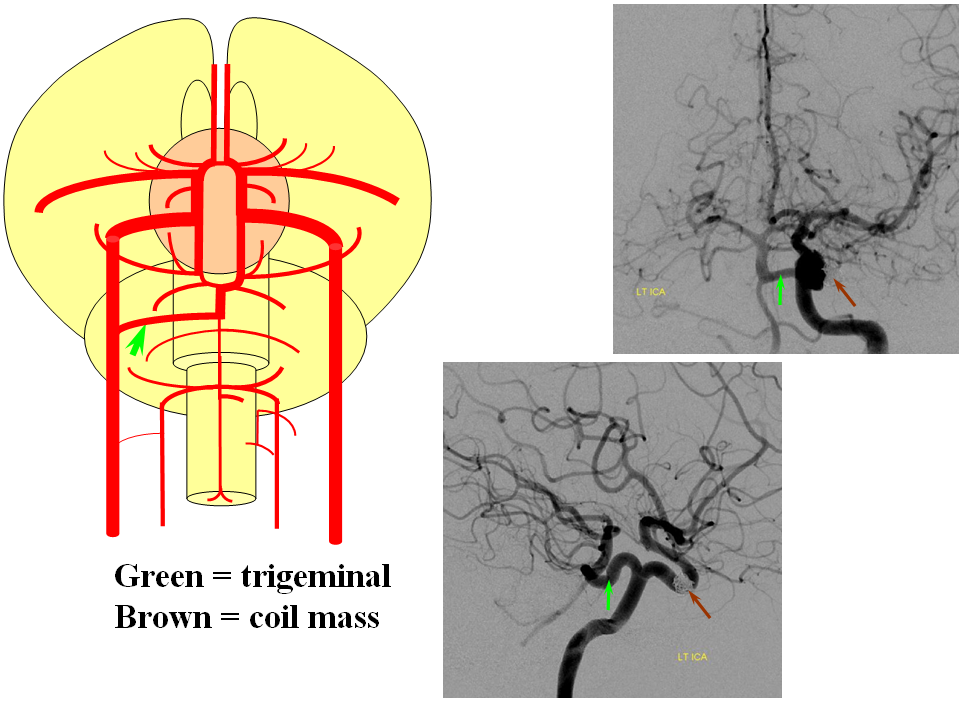 Here is a CT of the same case, showing the trigeminal as well as another variant, the accessory MCA (purple arrows), also discussed in greater detail on the Neurovascular Evolution page. 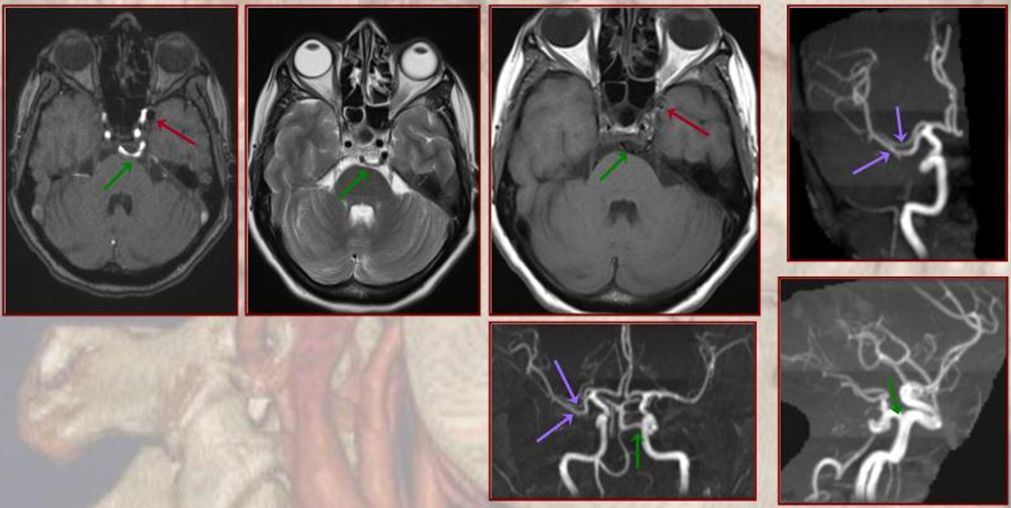 In the case below, the trigeminal artery itself is associated with a large aneurysm.  Is it intradural or extradural?

Below is a right PCA (P2) segment embolic occlusion.  This is an artery to artery embolus from a diseased right cervical carotid (no arrows needed), via the trigeminal (dashed arrow), into the right P2 (arrow).  The anatomy solves the riddle — left PCOM is fetal (no arrows needed), thus left P1 is hypoplastic and embolus of that size would not go there.  it also could not have come from the verts because the basilar below trigeminal is hypoplastic as well (arrowhead) — in fact this was originally considered a basilar occlusion.  However, clinical presentation was not consistent with that location and basilar hypoplasia below trigeminal is common.  Excellent clinical correlation here. 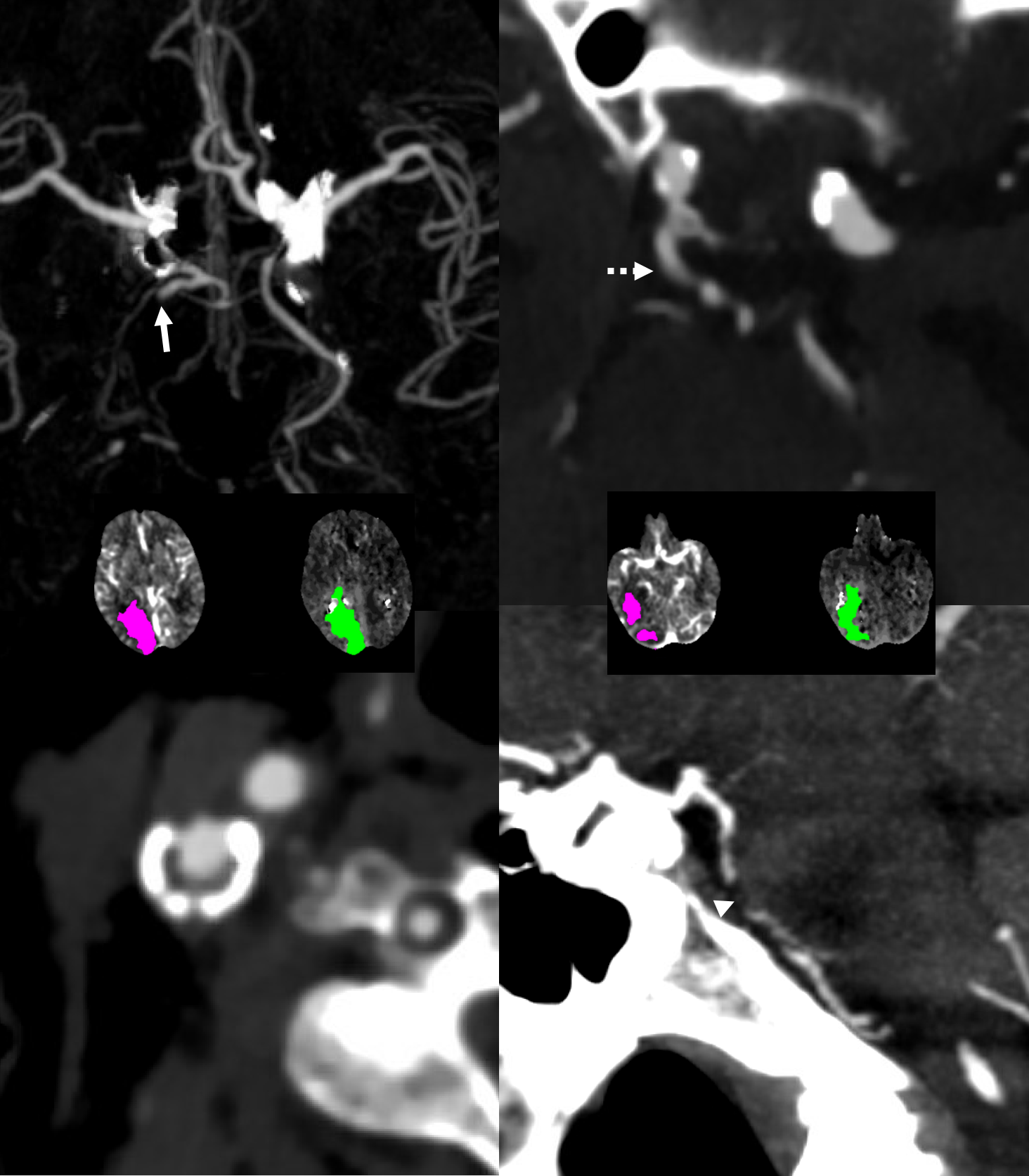 Trigeminal Artery and PCOM fenestration — not only does this person have a PCOM, but a fenestrated one — a finding that is exceedingly rare — I’ve only seen one. There is one report of it in the literature, however this report does not seem to have images.  So, this one is the only fenestrated PCOM image in the world I know of — except for all the ones being hidden somewhere for no useful purpose. Therefore, if you have any, please SHARE — like they told you in childhood.  Credits guaranteed.  Stereoscopic image below courtesy of Dr. Nelson and Dr. Becske 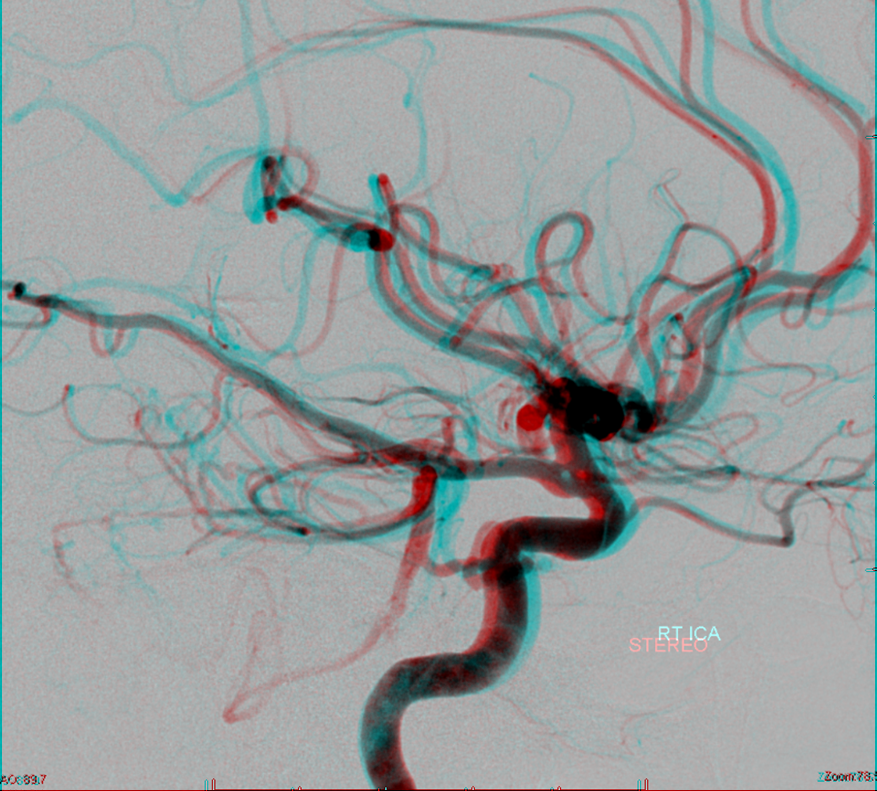 Spectrum — those “classic” cases of huge trigeminals and small PCOMs and small verts are just part of the spectrum.  Just like PCOMs range from tiny to fetal, so do trigeminals.  As mentioned above, everyone has a tiny trigeminal on the surface of the trigeminal nerve.  Here is an infundibulum of small trigeminal artery seen from both ICA and vert

Trigeminal supply to the AICA

In this variant, the trigeminal artery (white arrow), supplies the lateral cerebellar territory classically belonging to the AICA 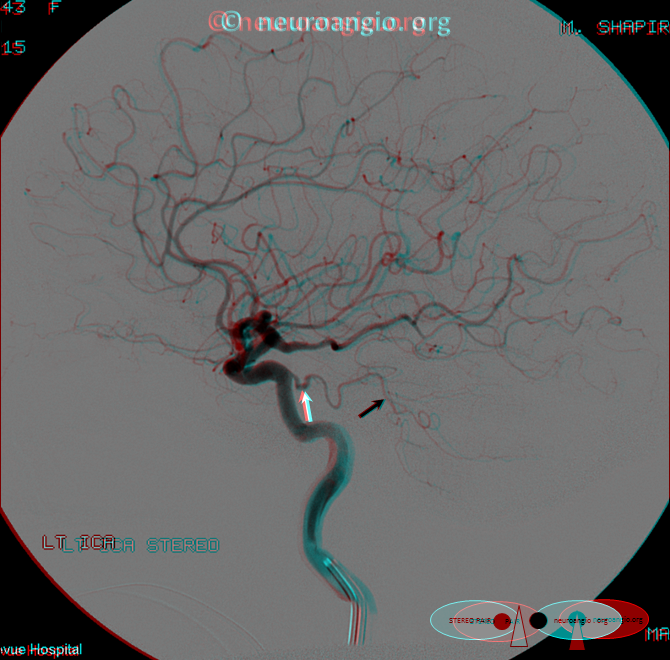 AP view of carotid injections showing the AICA (black arrow), with corresponding wedge-shaped void of its territory seen on the right vert injection.  Notice fetal disposition of both PCOMs. 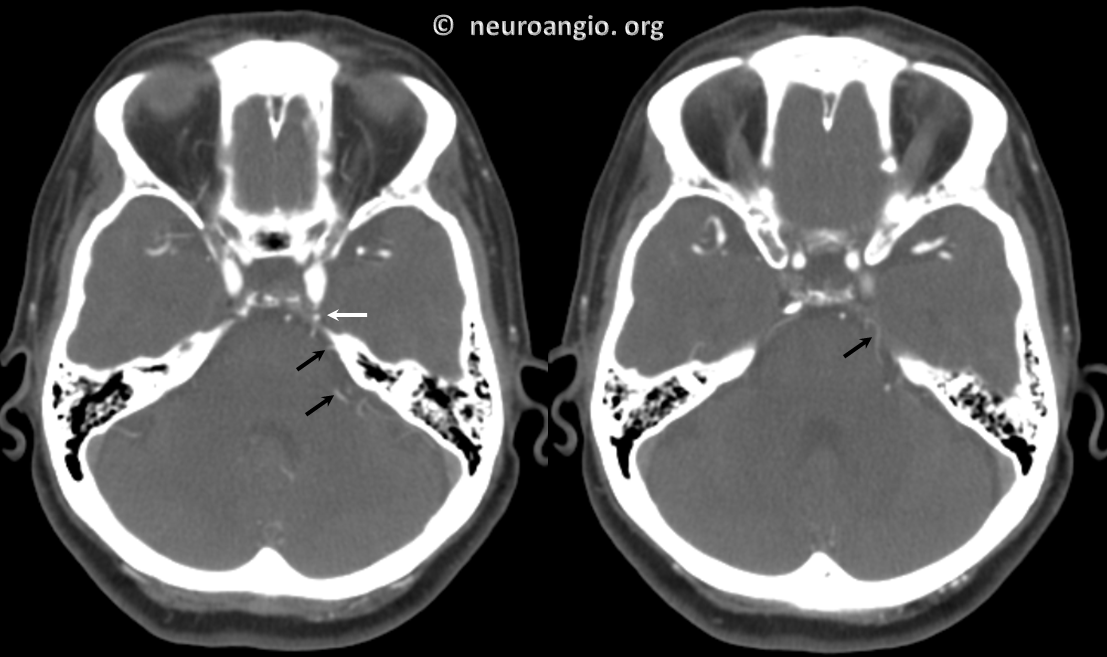 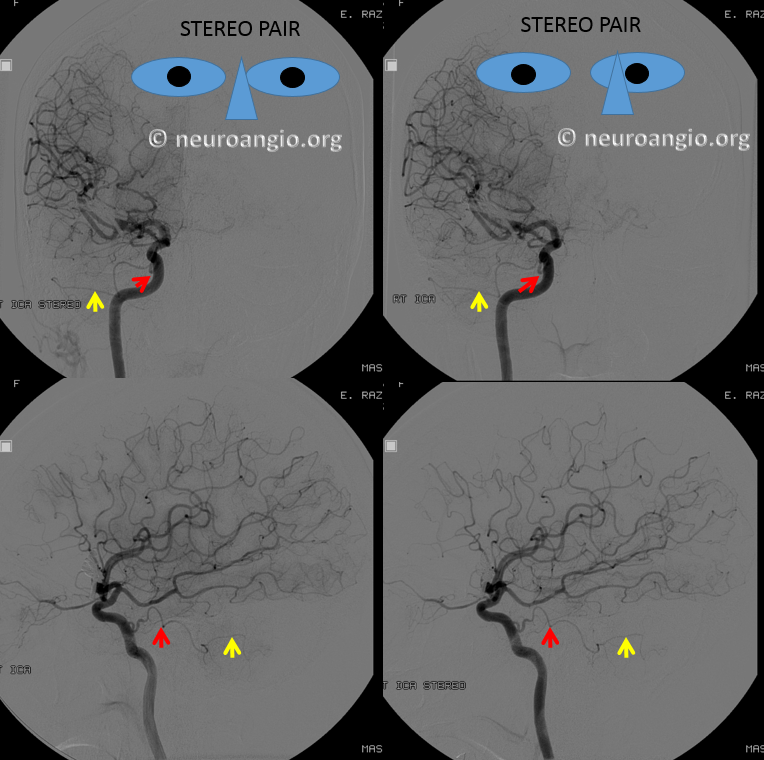 Want more?  How about this — see below — the left AICA is hypoplastic. Left PICA (white arrows) supply is limited to vermis.  The left SCA is small.  How come?  There are two possibilities — either the tissue is missing (infarcted, resected, etc), or there is yet another source of supply.  The answer is Trigeminal Artery — (black arrows).  It again often supplies “AICA territory”.  However, insofar as there is really no such thing as “AICA territory” — it being in balance as we keep saying with SCA and PICA — the extent of trigeminal cerebellar supply is as variable as anything else.  Here, it is responsible for a big chunk of it (white oval in frontal view), self-evident in lower right lateral view — taking care of both lateral and inferior right hemisphere. 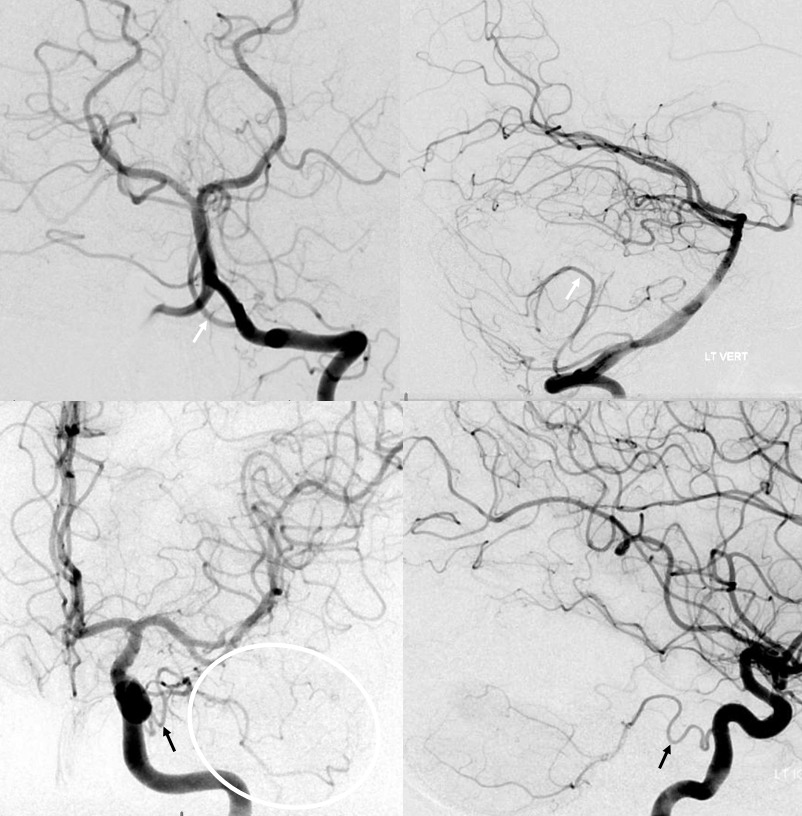 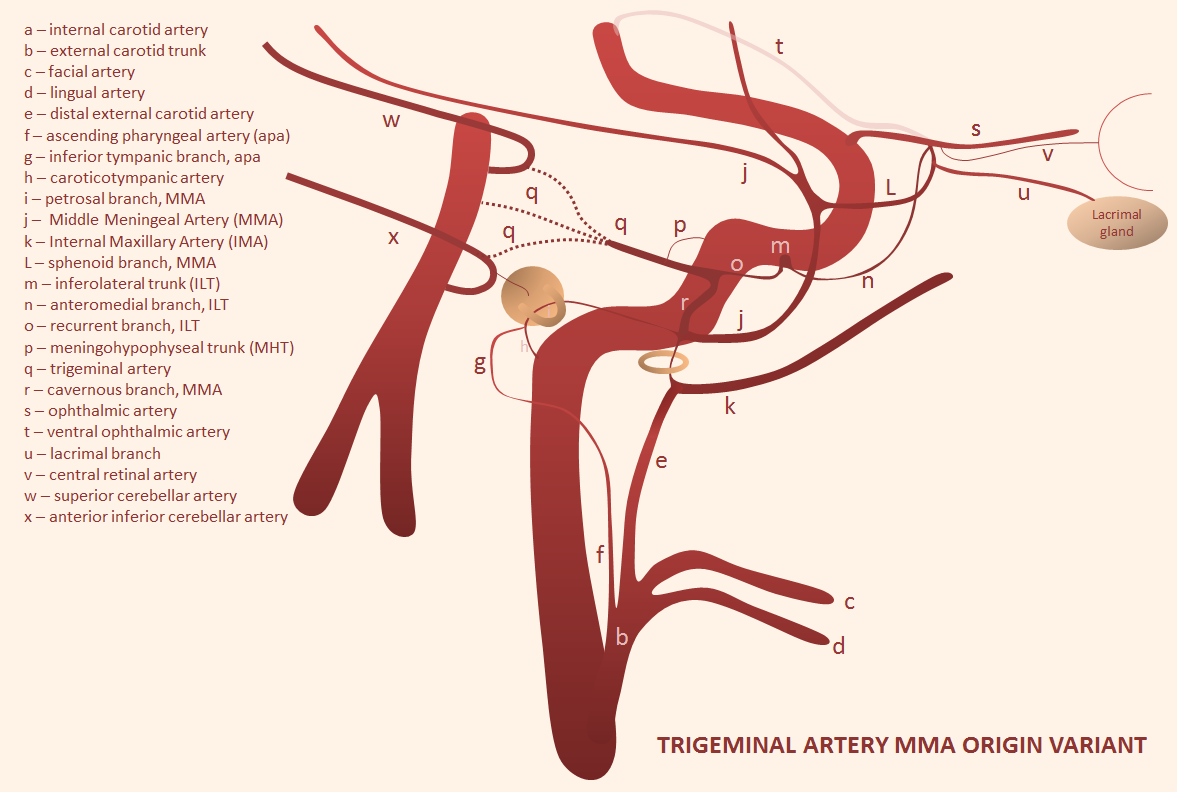 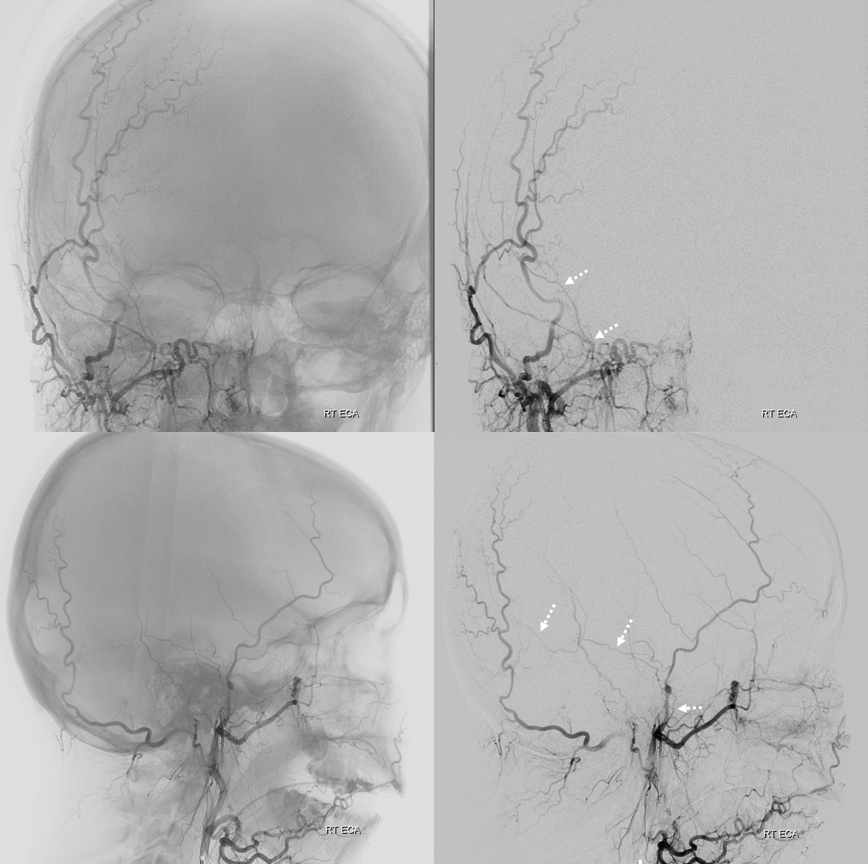 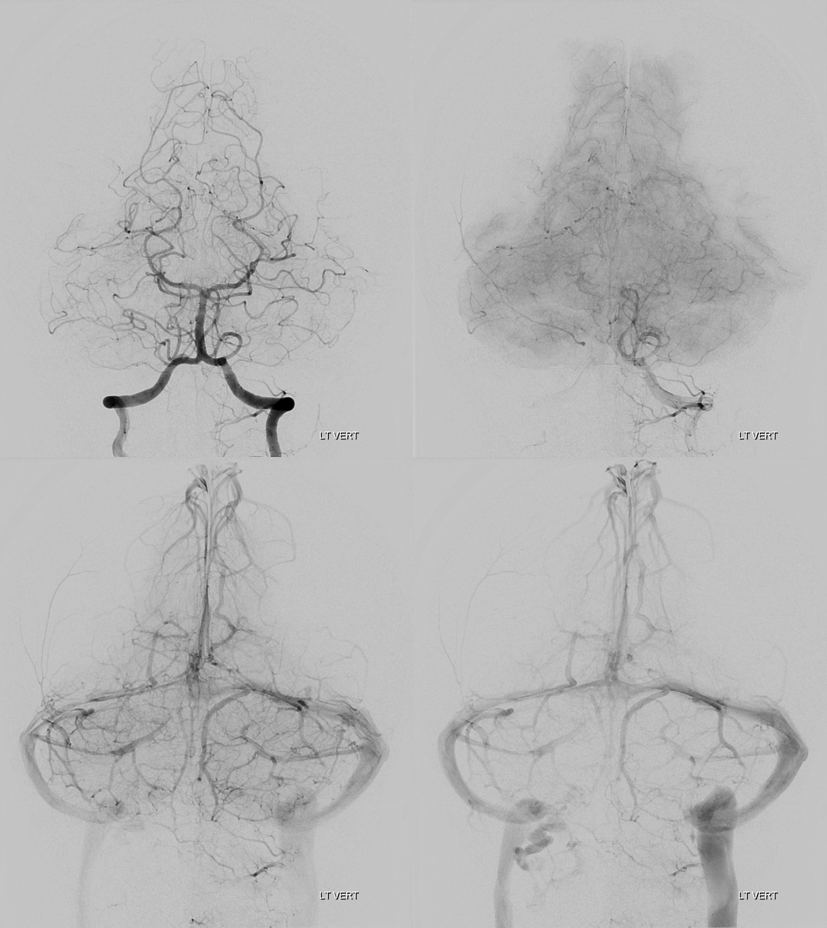 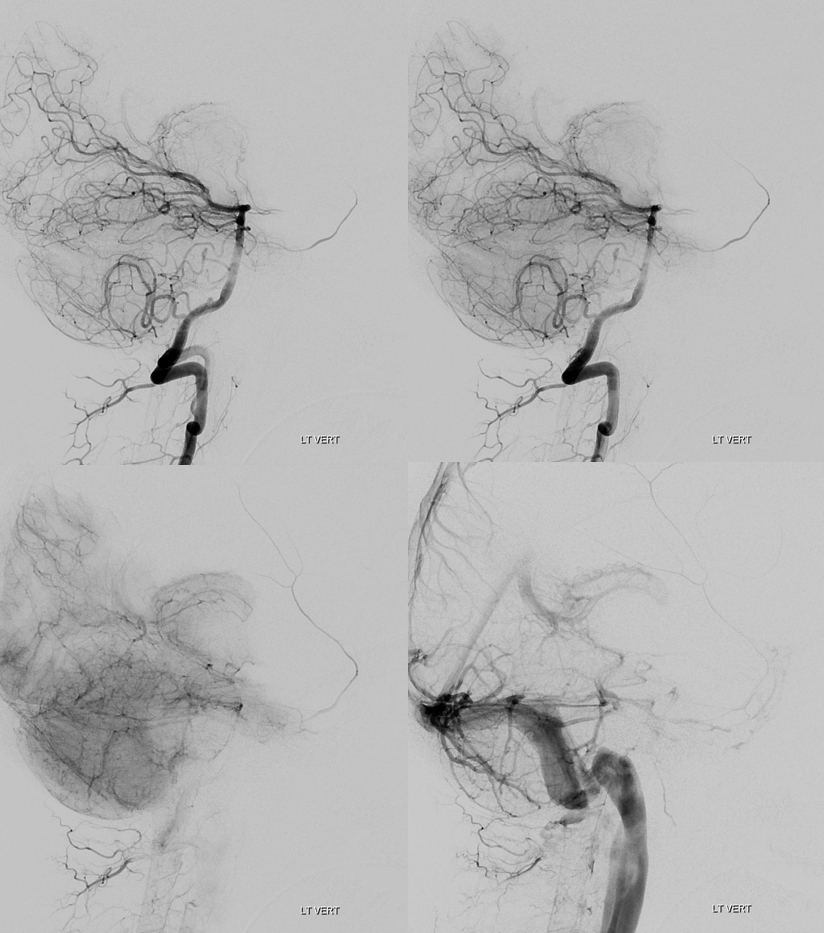 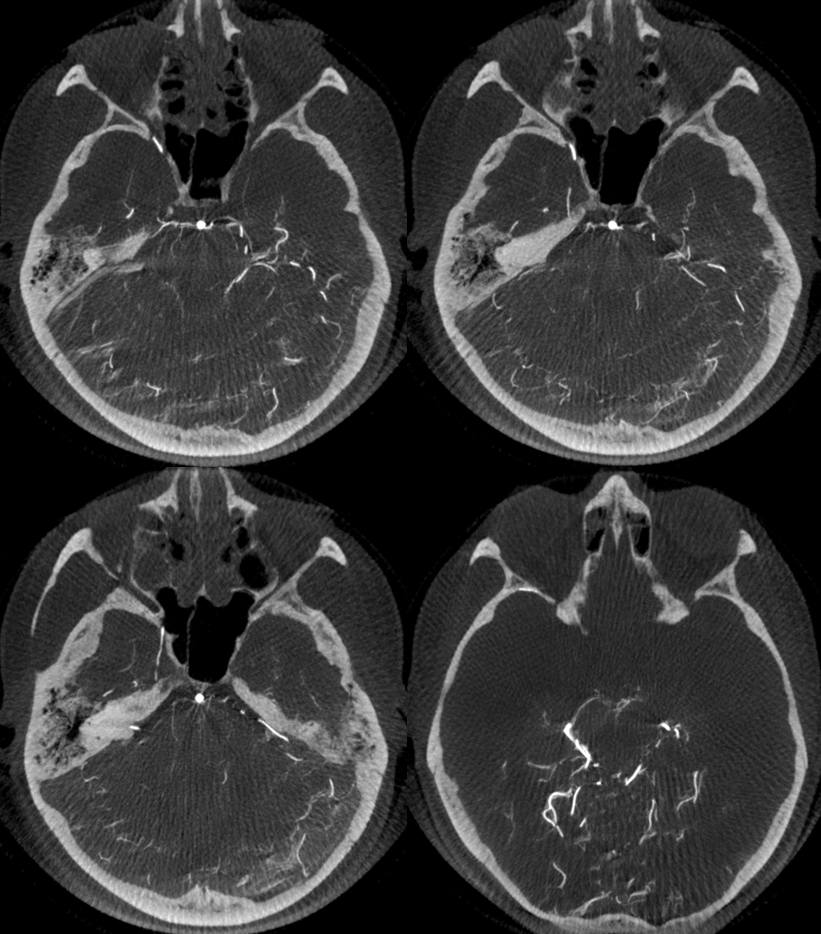 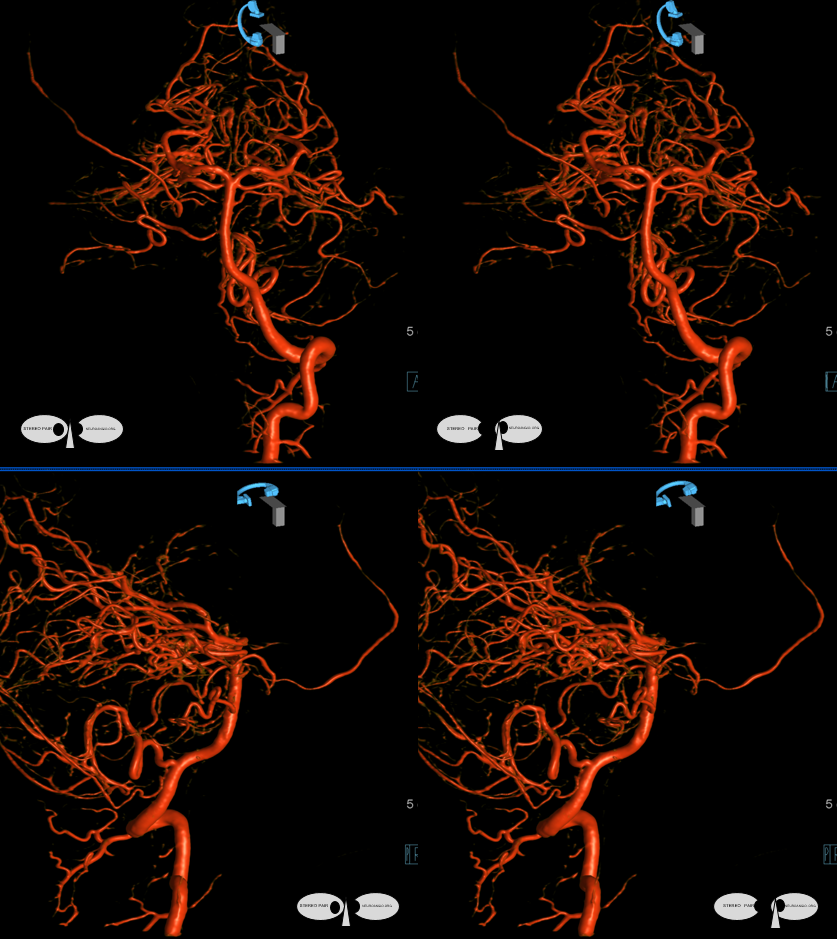 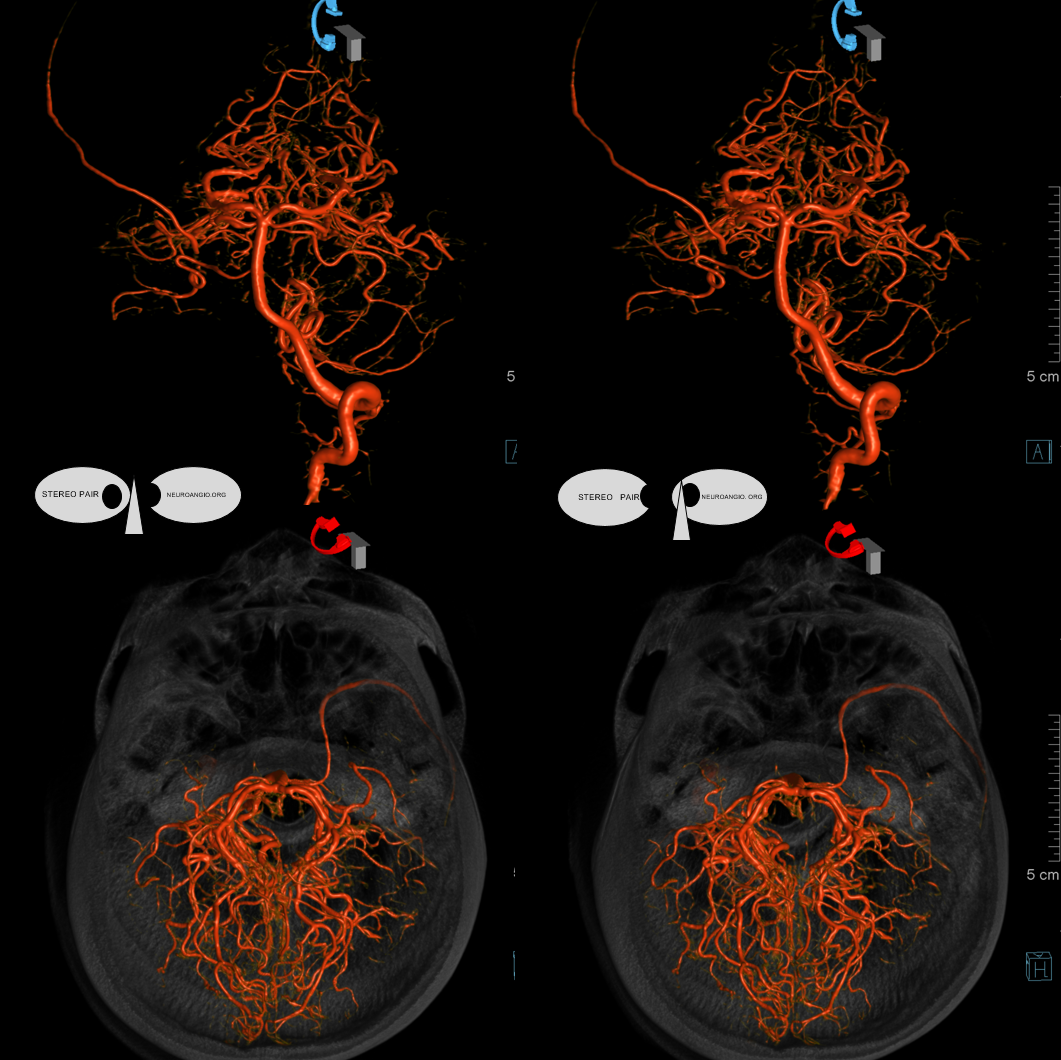 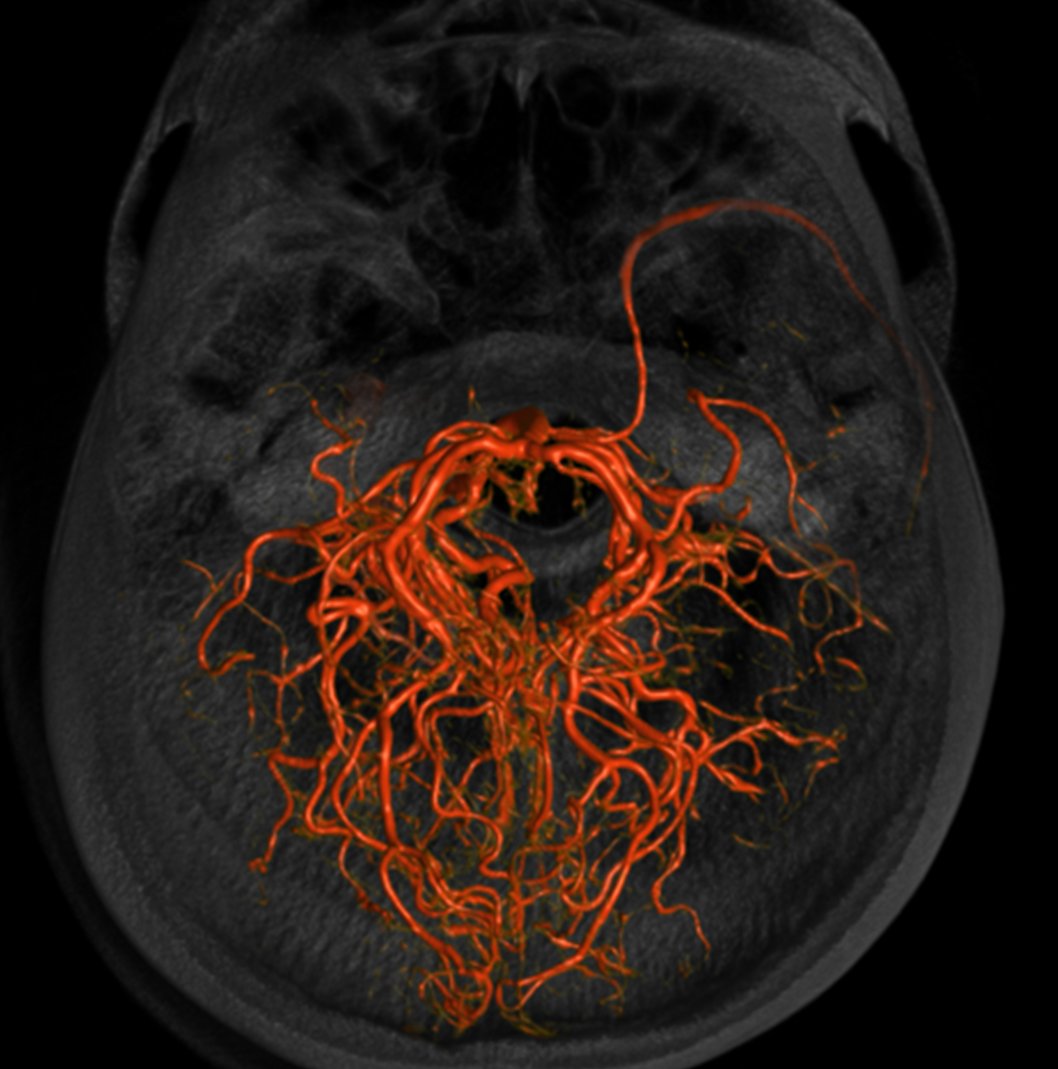 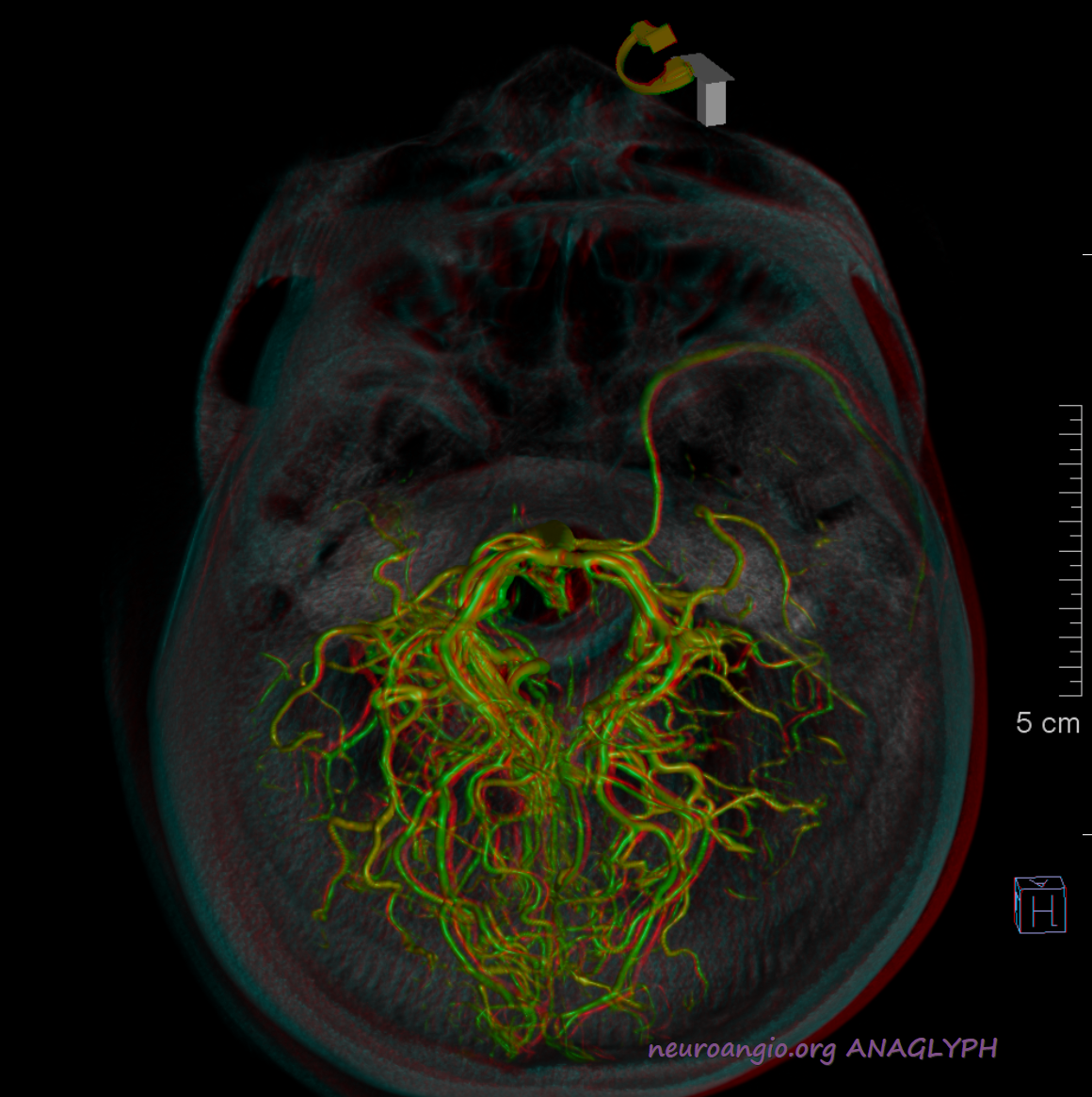 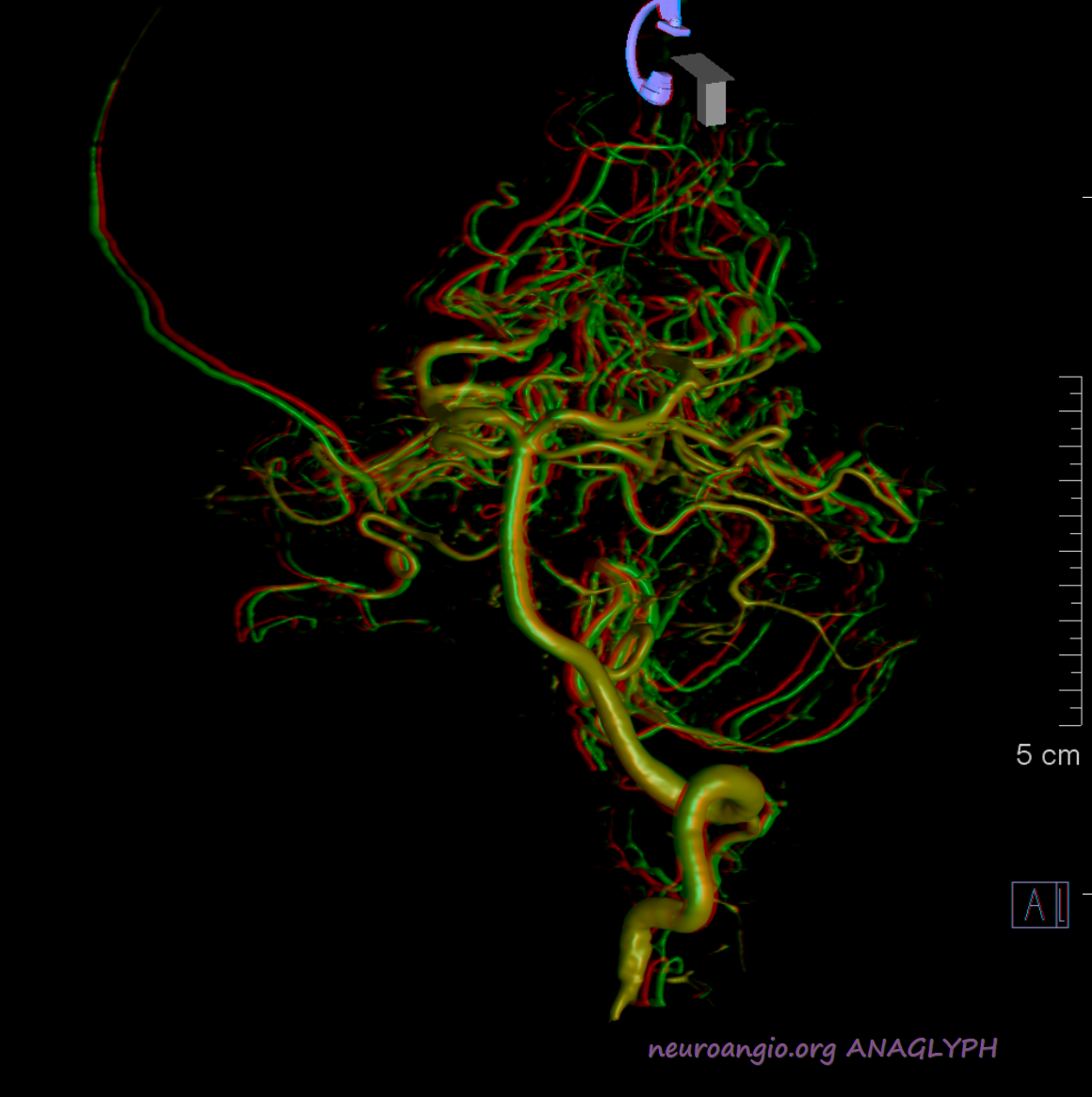 And, in case you really dont believe its the trigeminal artery, check out these co-registration images of angio (axial MIP reconstructions of rotational angio) and finally with superimposed tractography of the Vth nerve!  Images courtesy Dr. Nader Delavari 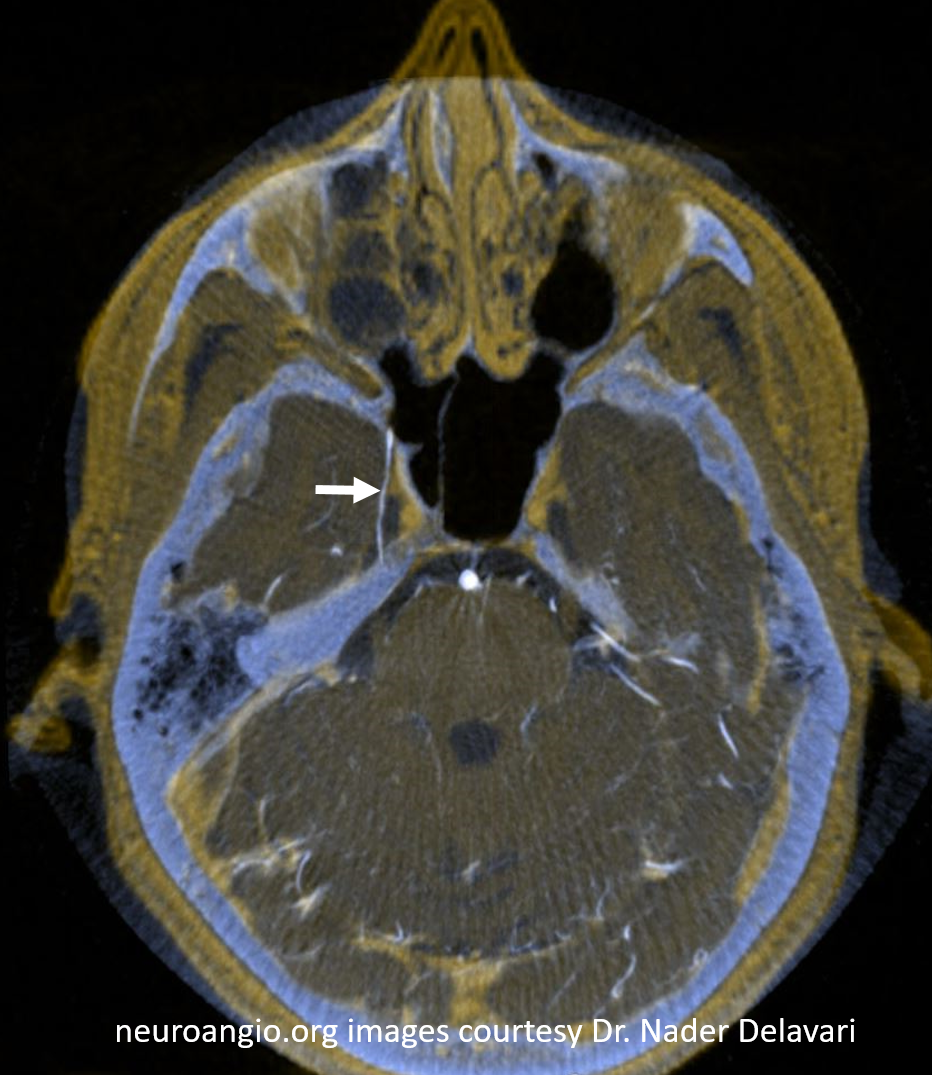 Now with tractography of CN V 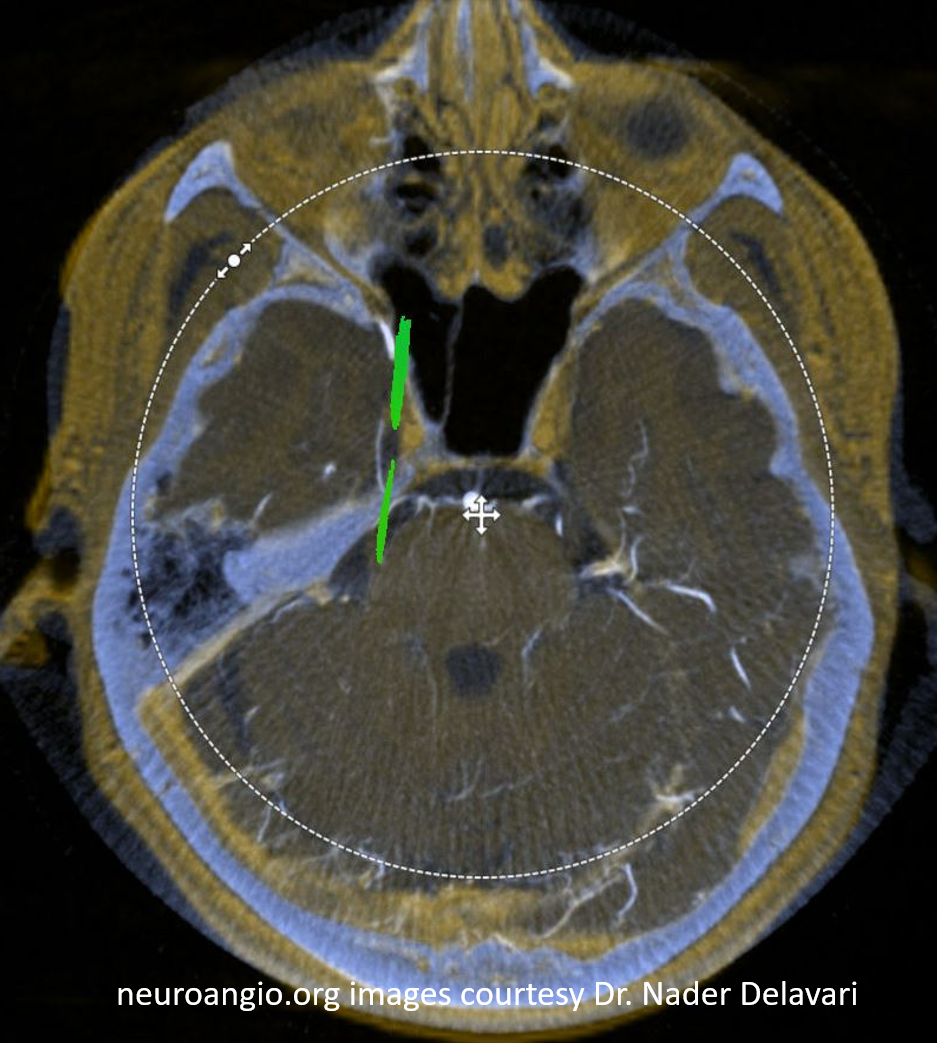 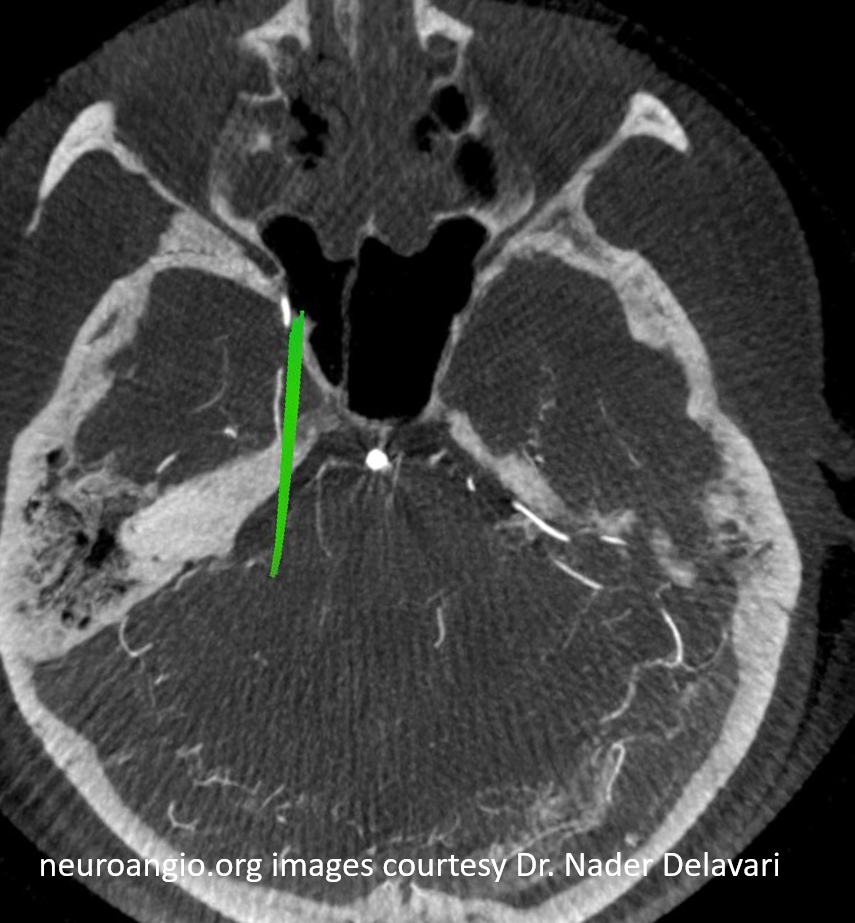 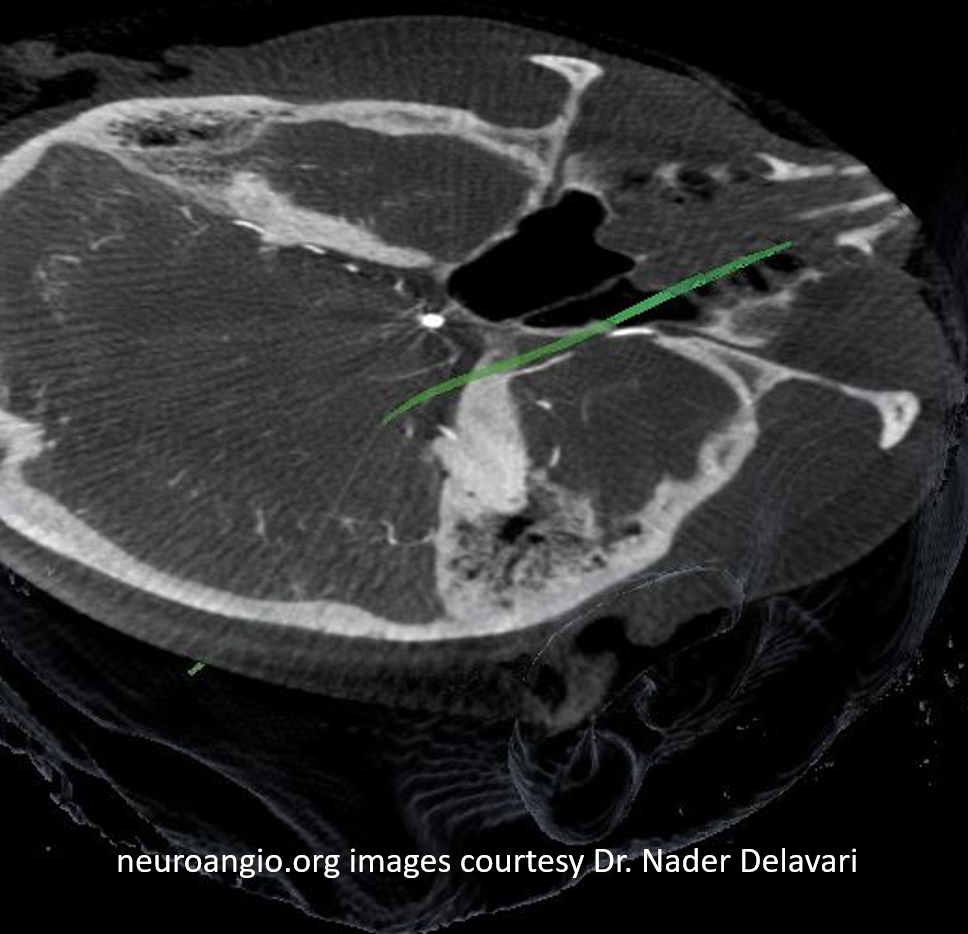