One of the easiest vessels to recognize in the angiographically confusing nasal region.  As usual, neuroangio clears up any confusions.

In the face, its all about compartments/ spaces.  For example, you have septal vessels in the nasal septum, which are midline and belong to the sphenopalatine artery. Moving laterally, there are lateral nasal branches of the sphenopalatine artery running in the turbinates — inferior (61) and middle (62) turbinate.  More laterally still, you have alveolar arteries (anterior, middle, posterior or whatever happens to be) responsible for maxillary sinus.  Naturally, these will be all superimposed on lateral projections, but easier to differentiate on frontal views.  That’s the idea

Infraorbital artery is most often the largest vessel projecting superiorly and anteriorly, in arc-like-fashion, from the terminal IMAX.  On DSA, use unsubtracted views — the ones that are usually not saved when knowledge or care is wanting.  On these views, it will project below the orbit, and is in the maxillary sinus compartment.  Anteriorly, it emerges from the infraorbital foramen, and has a choice of company, including angular, infratrochlear, and transverse facial arteries.

Despite its name, the infraorbital artery is an infrequent source of meaningful collateral support to the orbit.  However, it can and does have anastomoses with the ophthalmic artery, even if usually very small.  They tend to be distal to origin of the central retinal artery (12).

BALANCE — the key word of neuroangio. Remember its all about balance.  Infarorbital is in balance with facial and sphenopalatine.  Sometimes a large one supplies angular territory, and may encroach on nasal supply also.  or vice versa. See below

Typical volume rendered views — proximal infraorbital artery (81) is also shown by white arrows. In this case it has several branches (dashed and open white arrows) and in fact has two infraorbital foramina (see below).  Also designated are a number of other vessels (refer to master diagram) 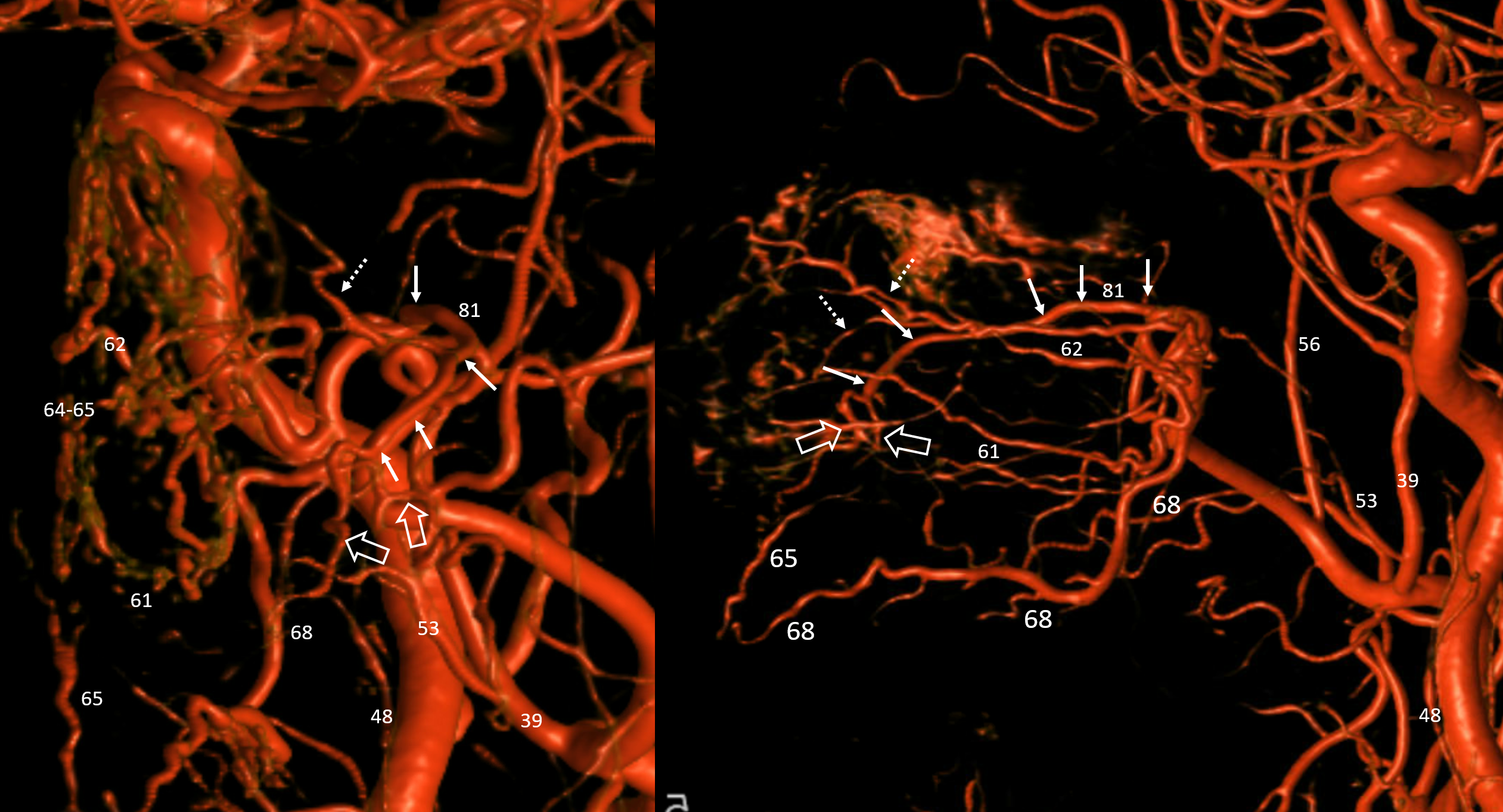 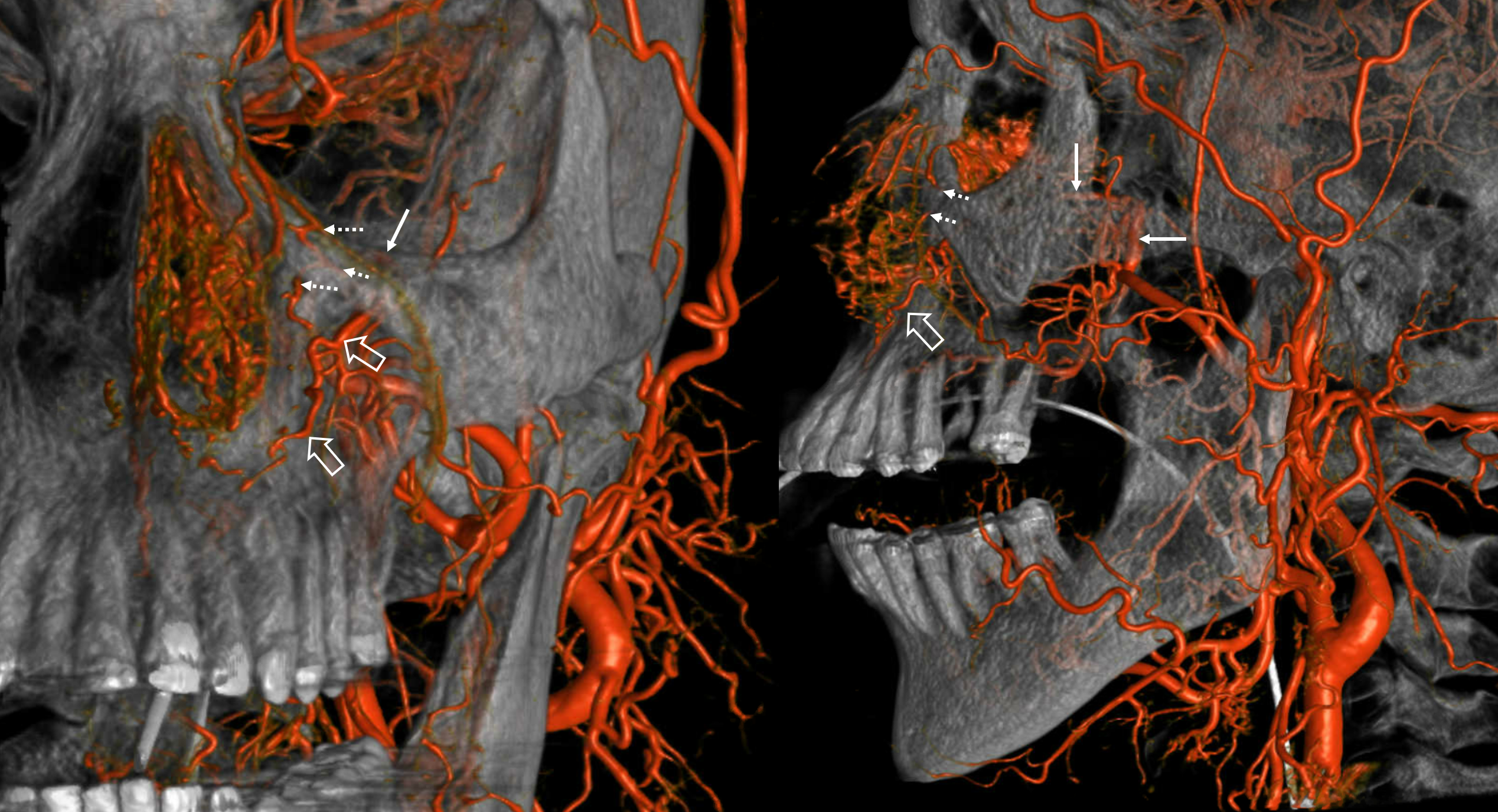 Cross-eye stereos are super helpful — notice straight “down the barrel” course of the infraorbital artery on frontal views. 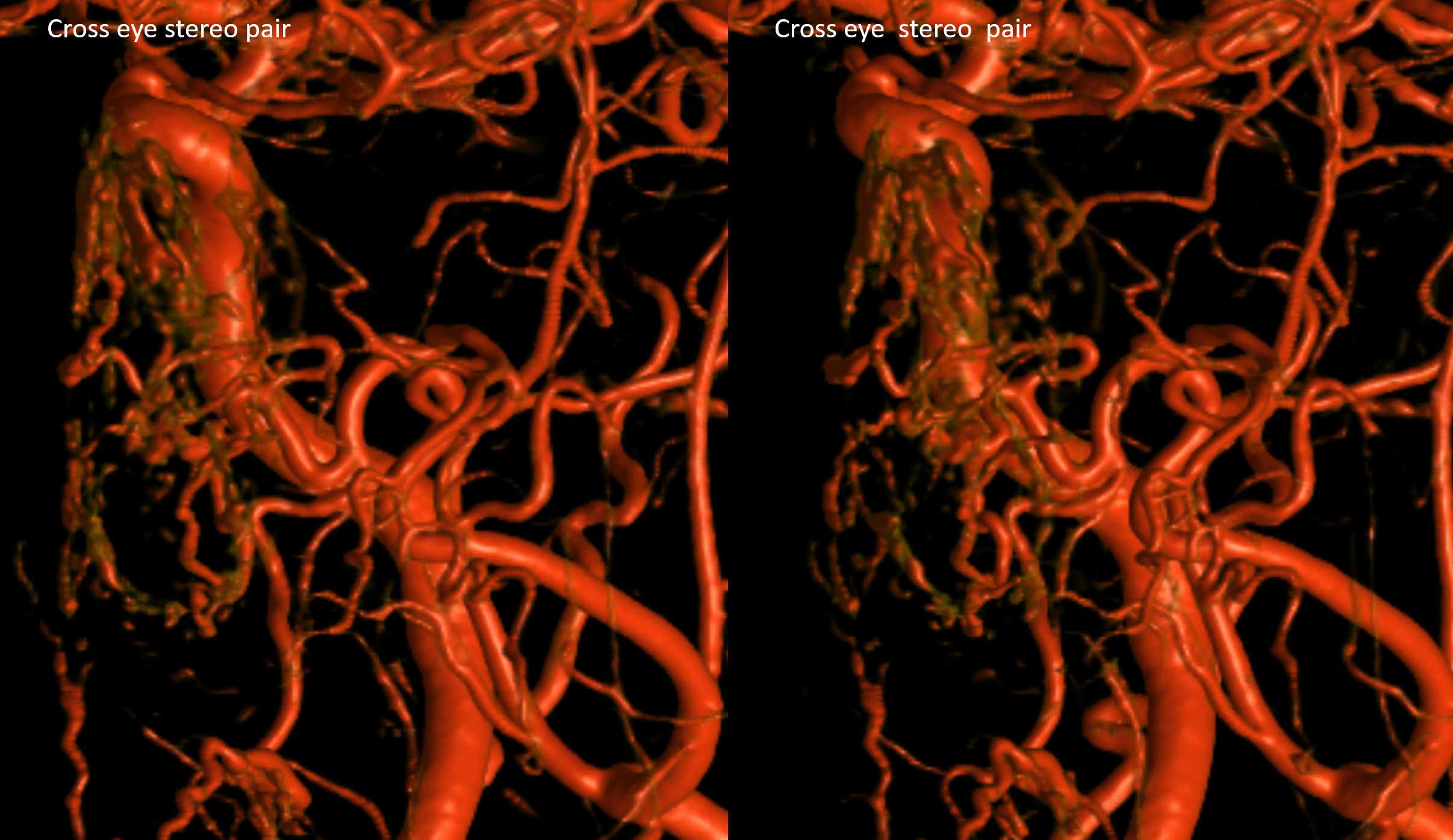 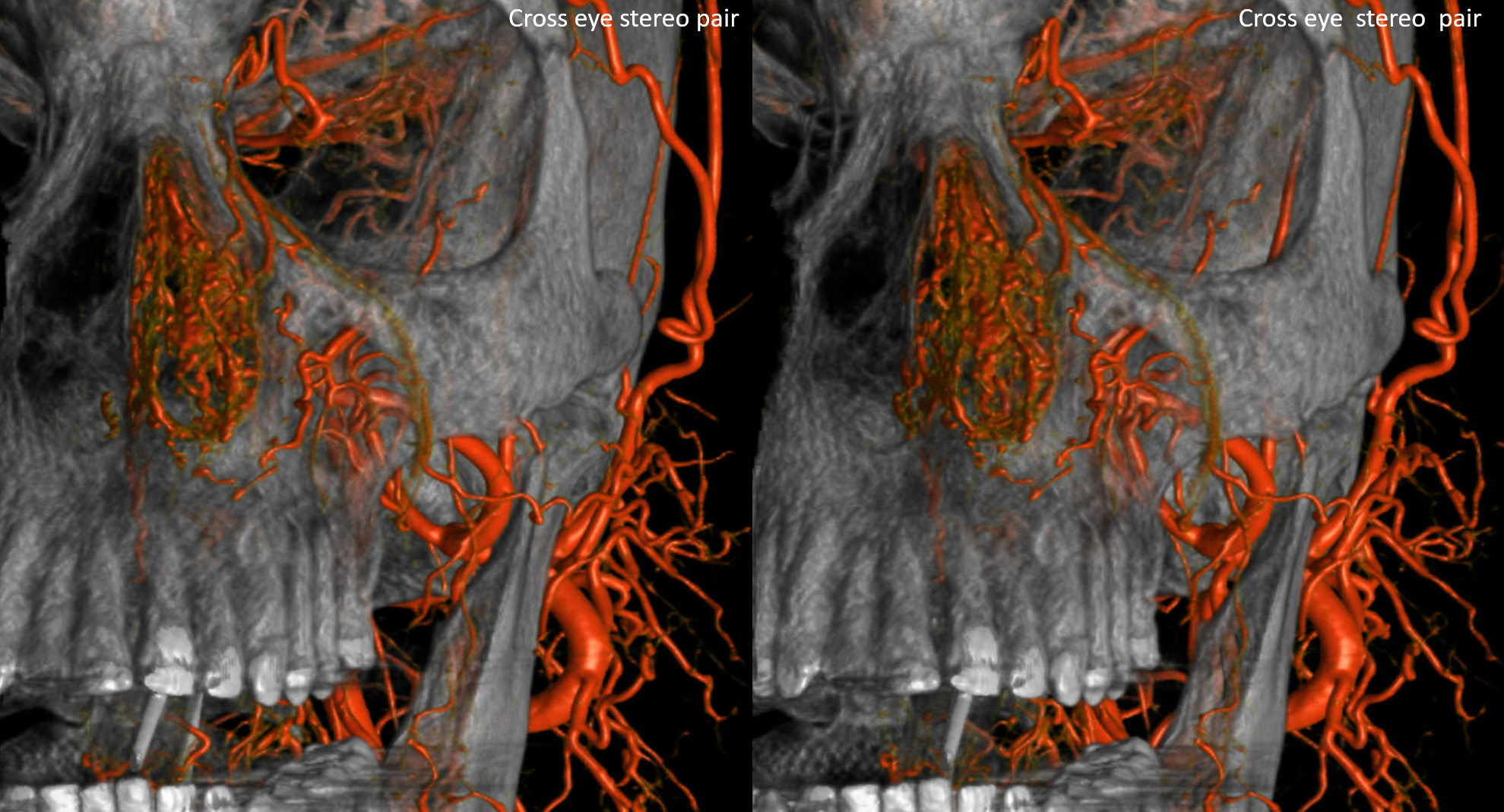 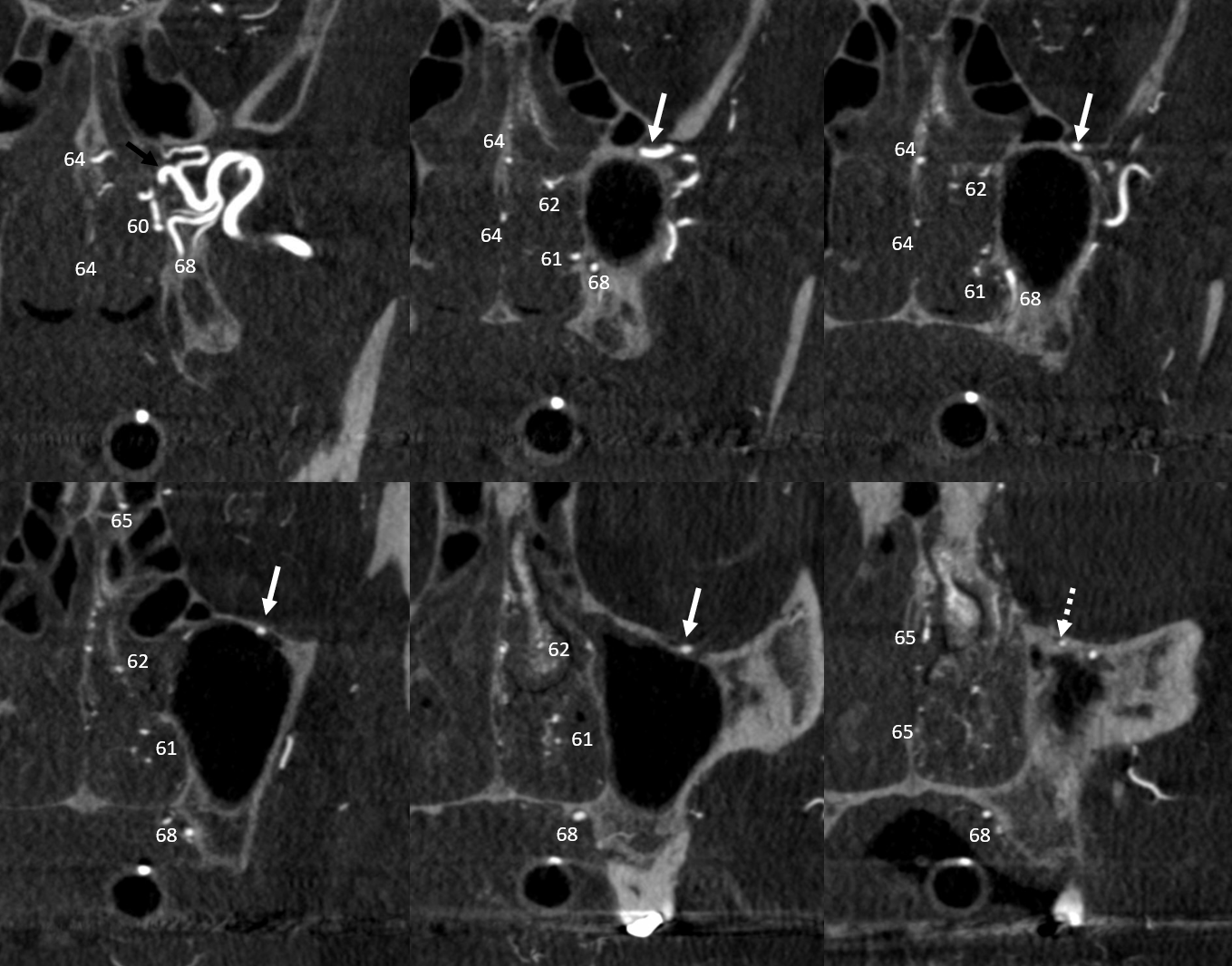 Here is a simple lateral view — no frontal, so learn to recognize them like that 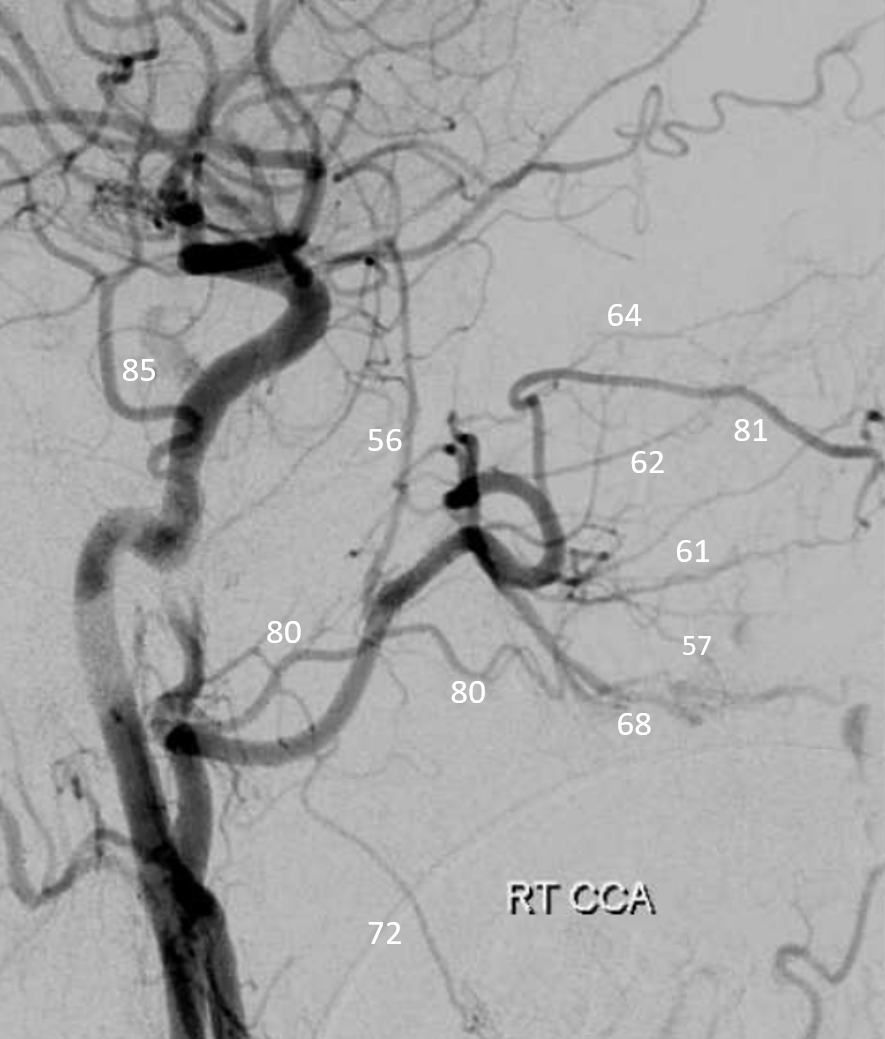 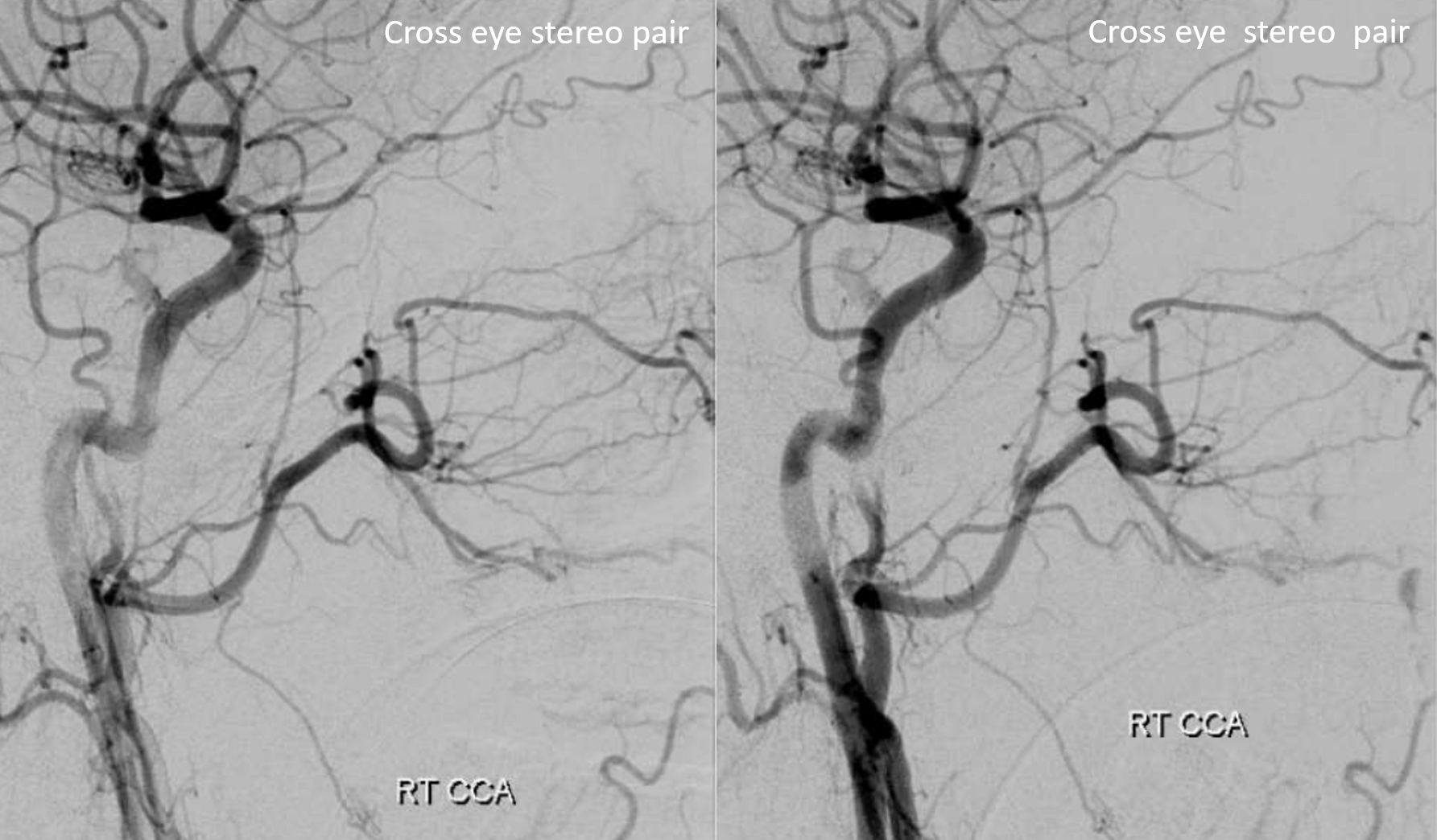 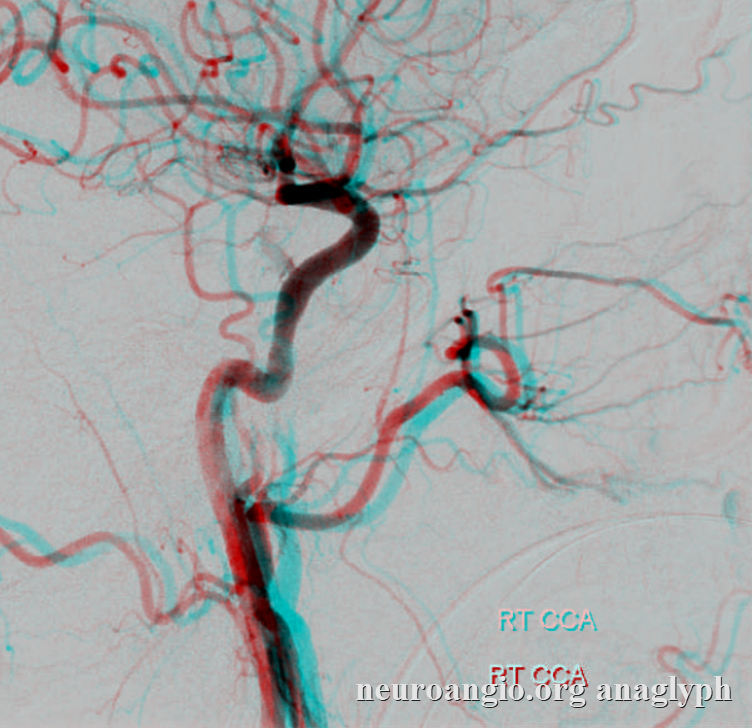 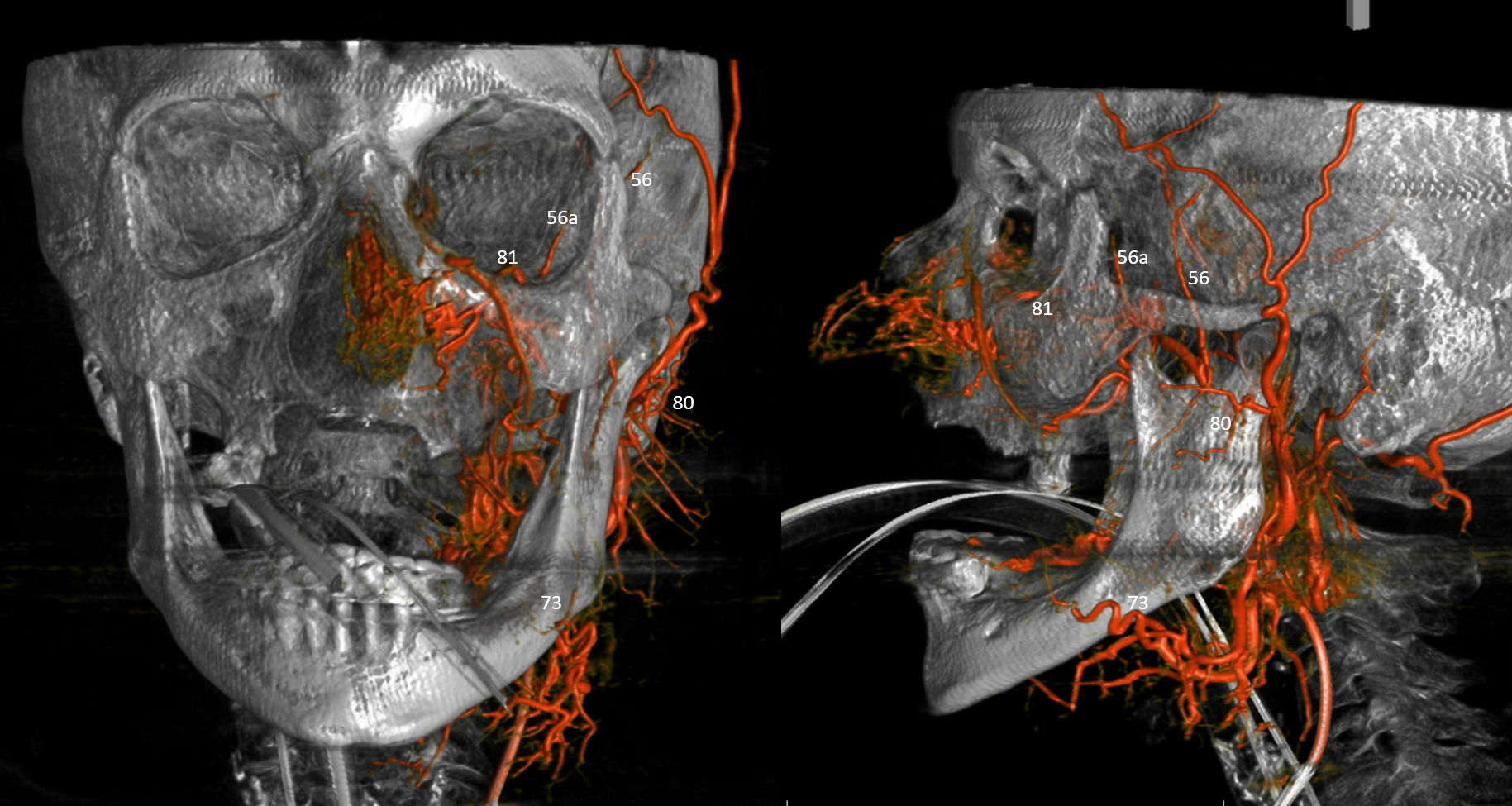 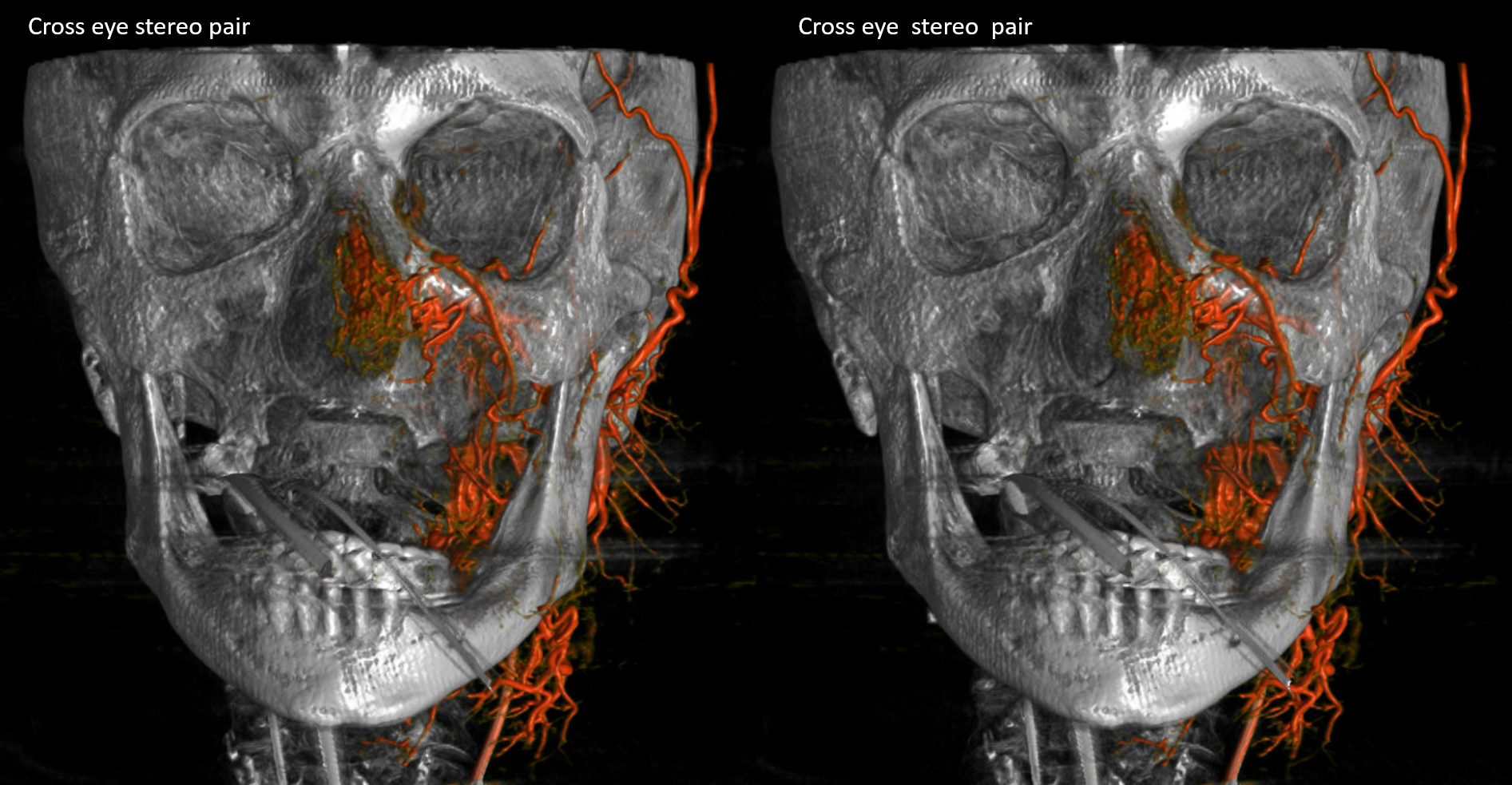 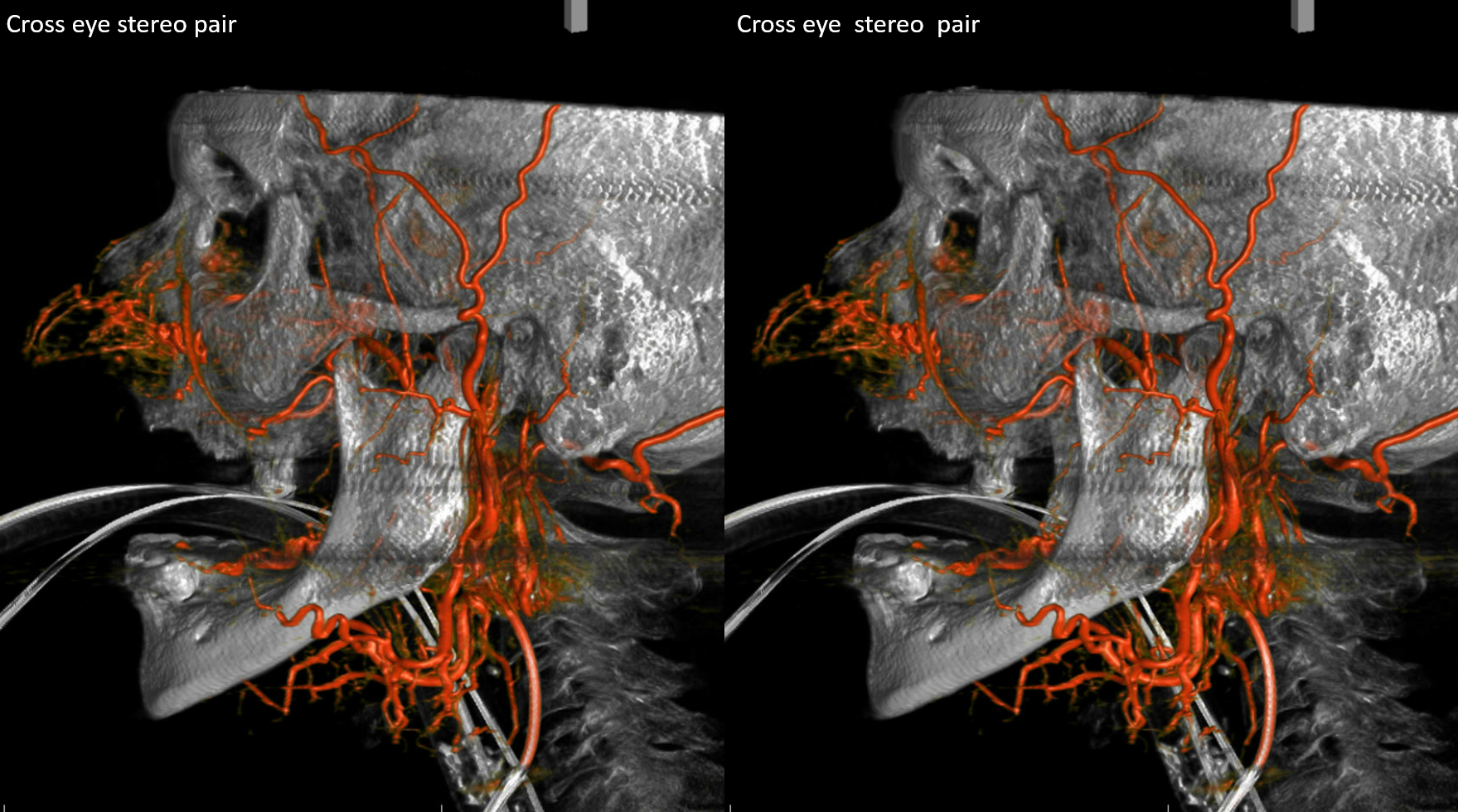 Here the sphenopalatine contributes to some septal supply. The turbinates are taken care of by infraorbital artery — nicely seen in the infraorbital canal on partial native mask views 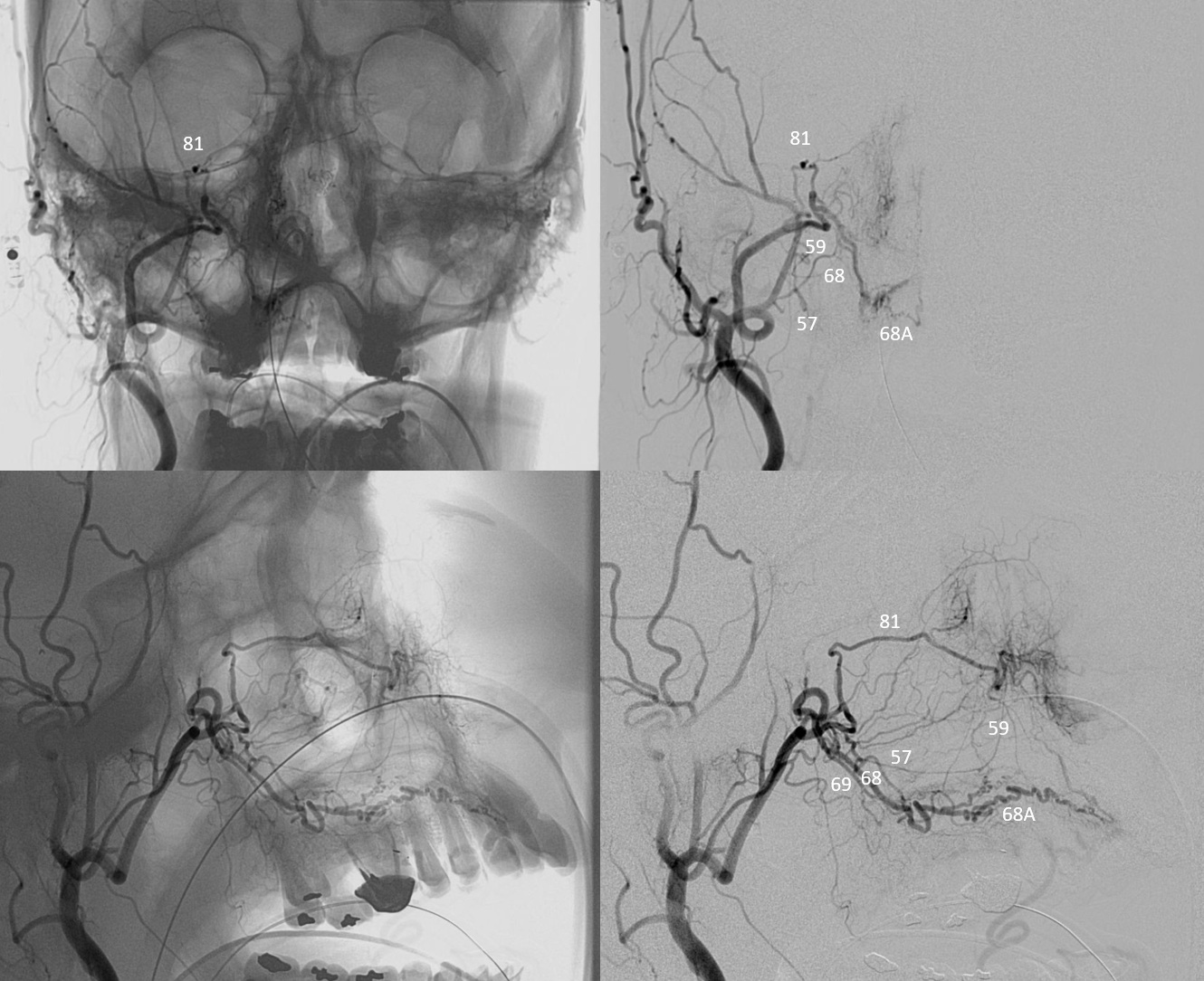 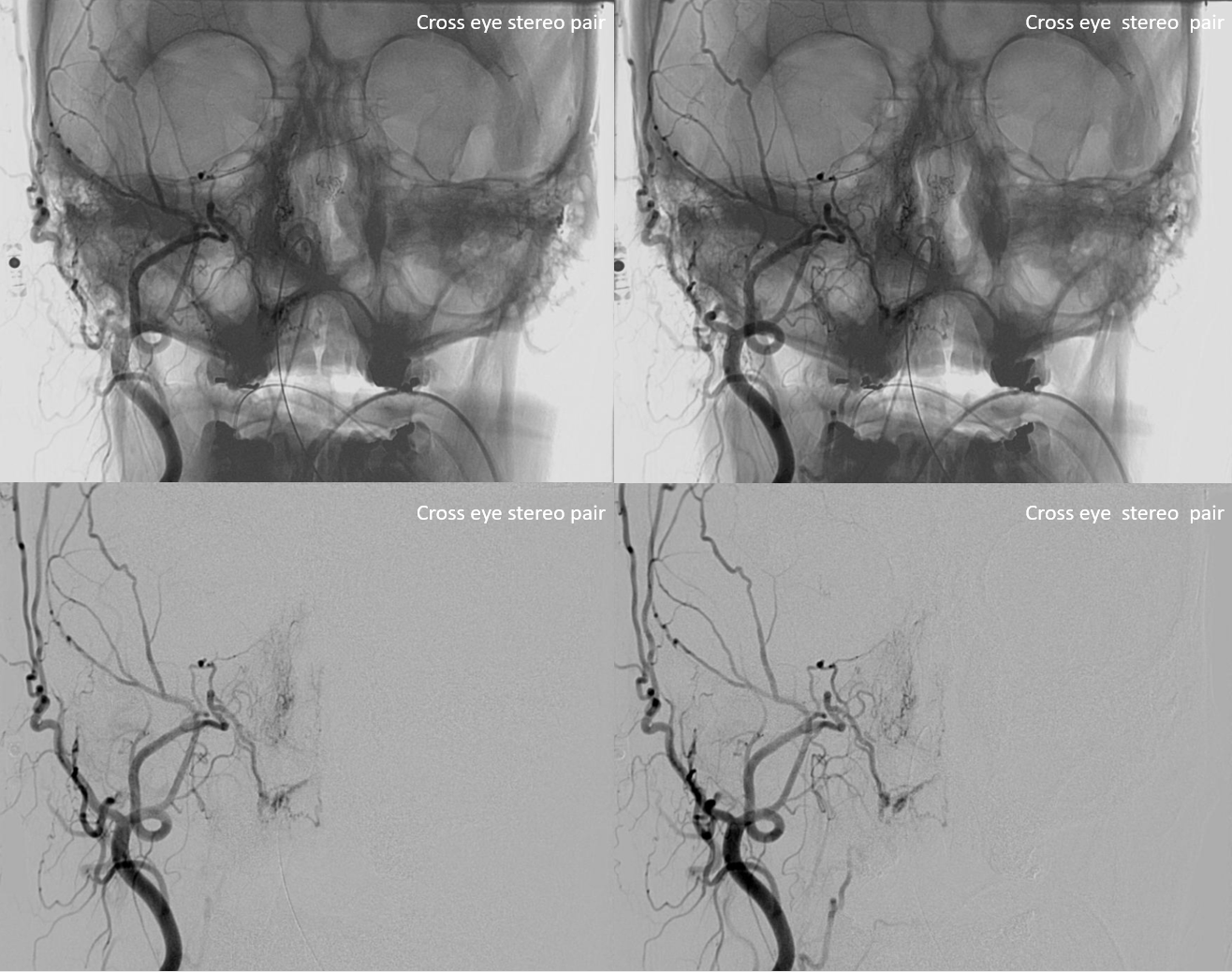 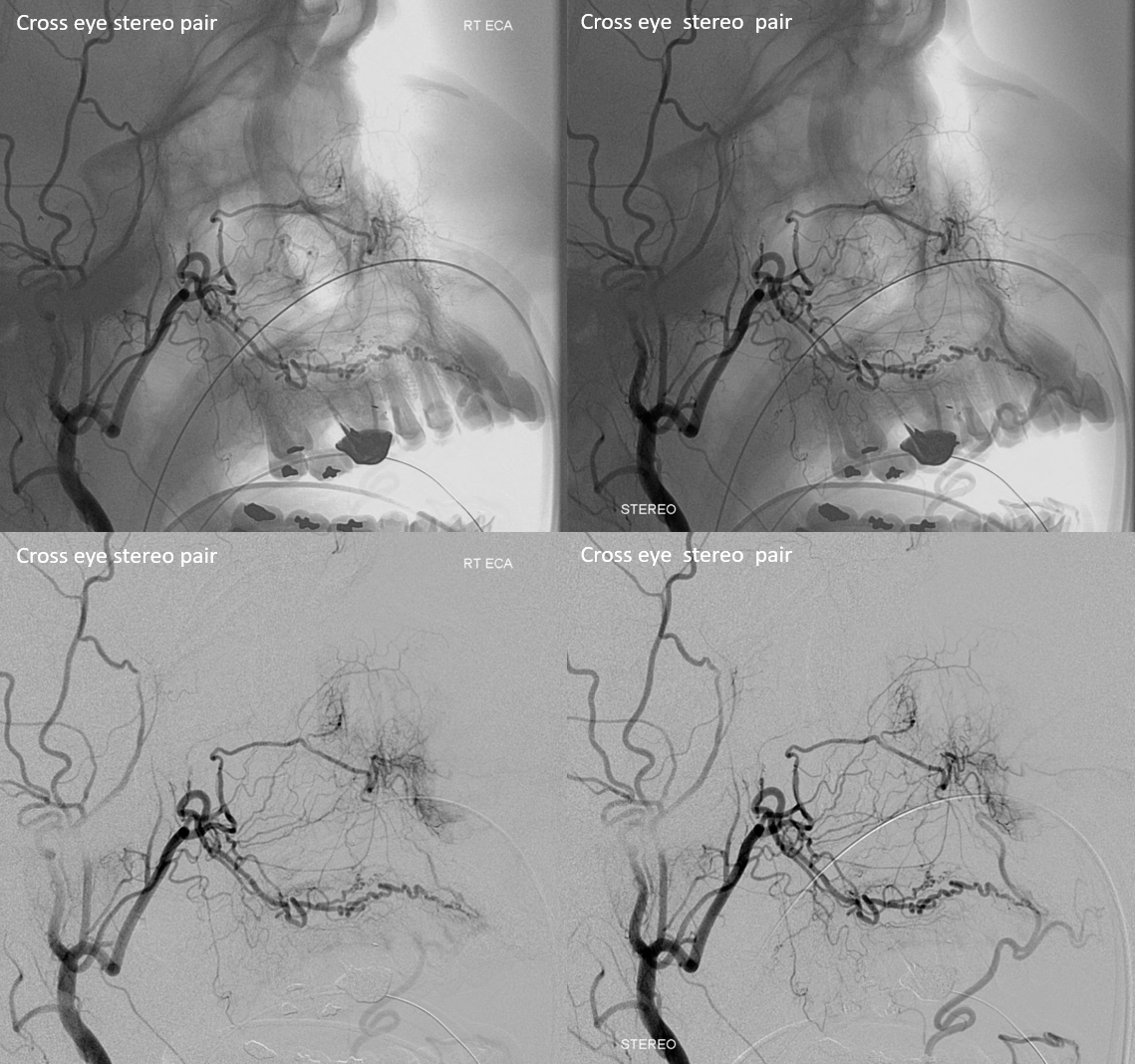 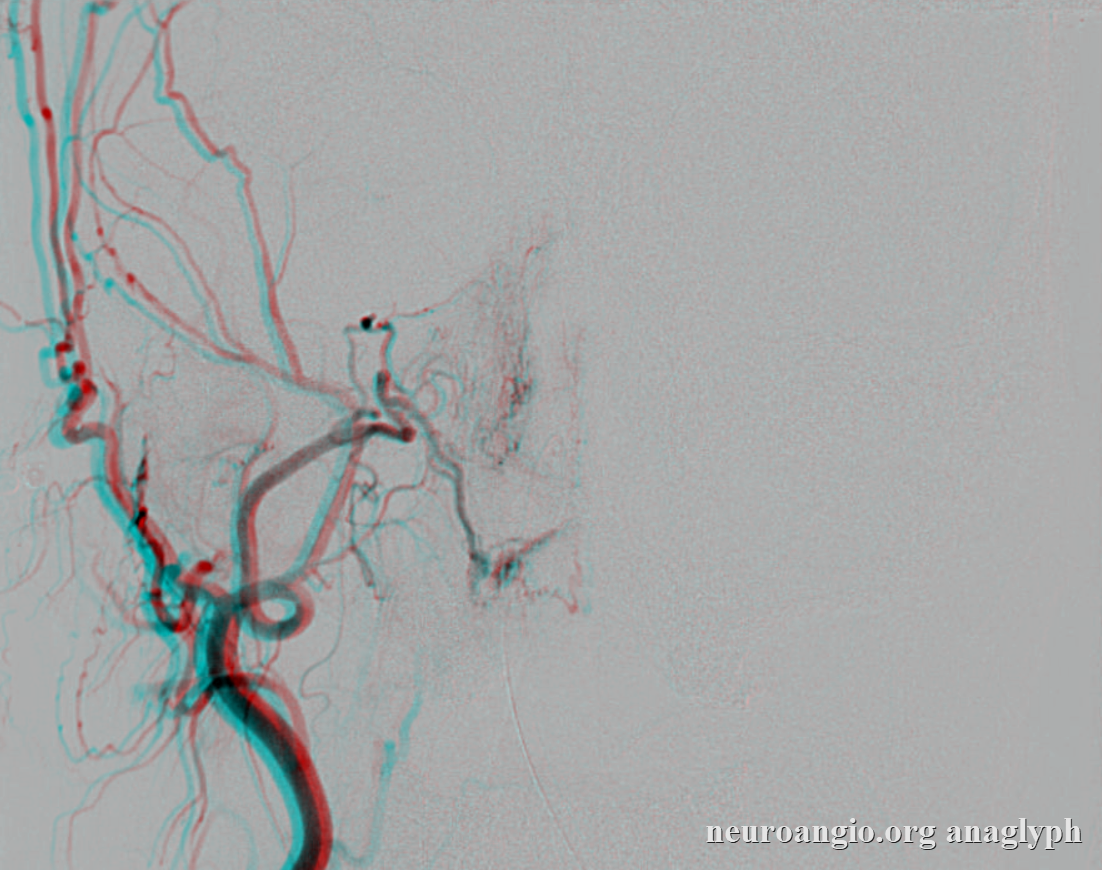 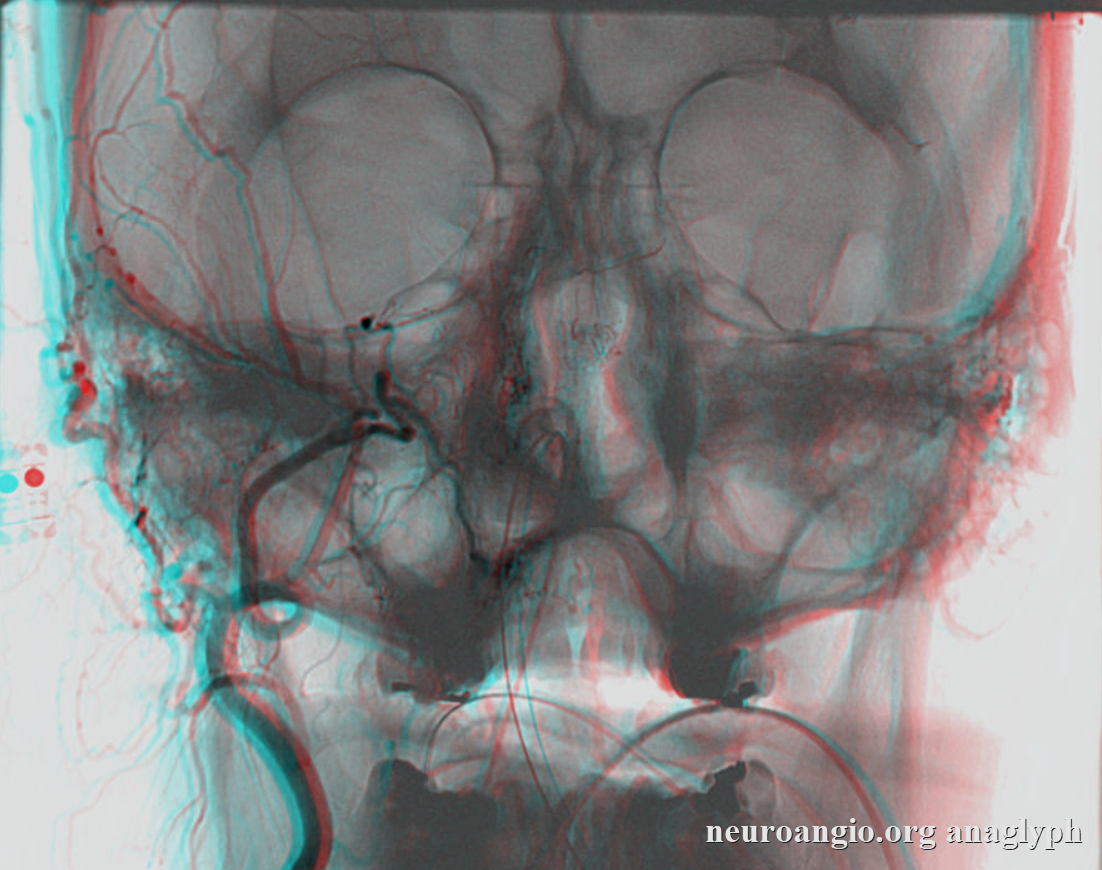 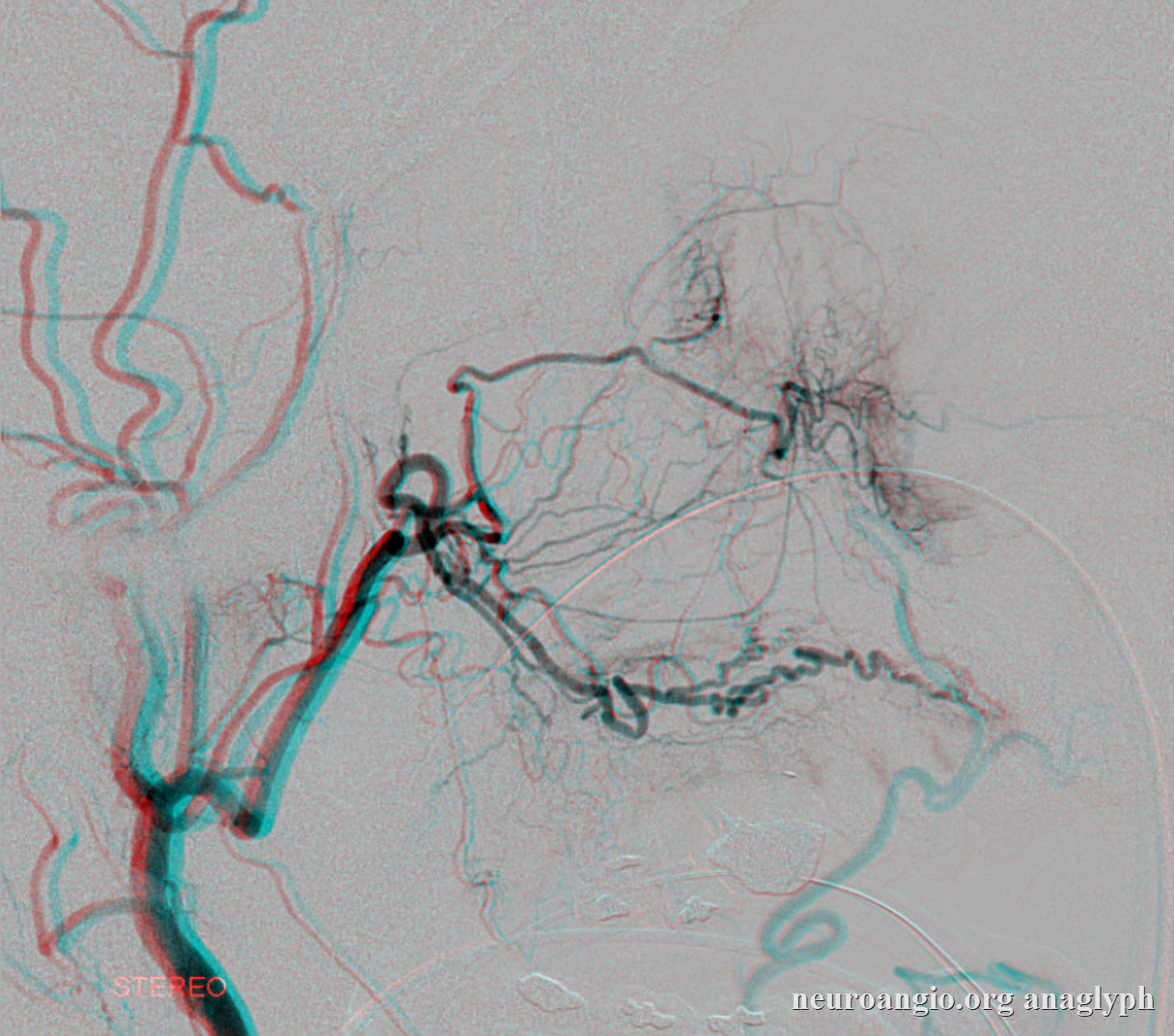 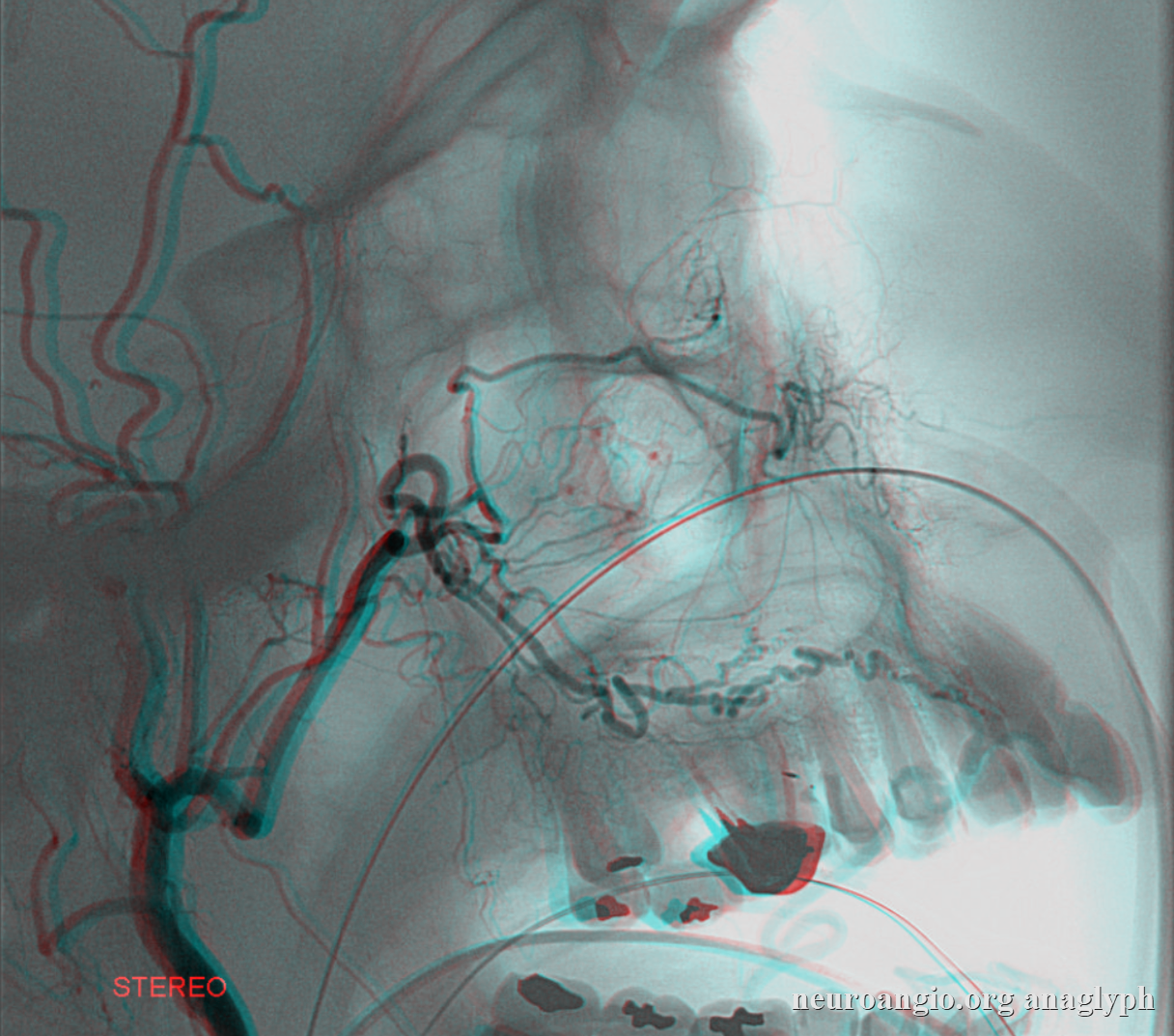 Below is a curious anastomosis between the infraorbital and a facial branch (arrow) — this is not the angular branch, which is more anterior. The facial system is very well developed.  Again, its balance. 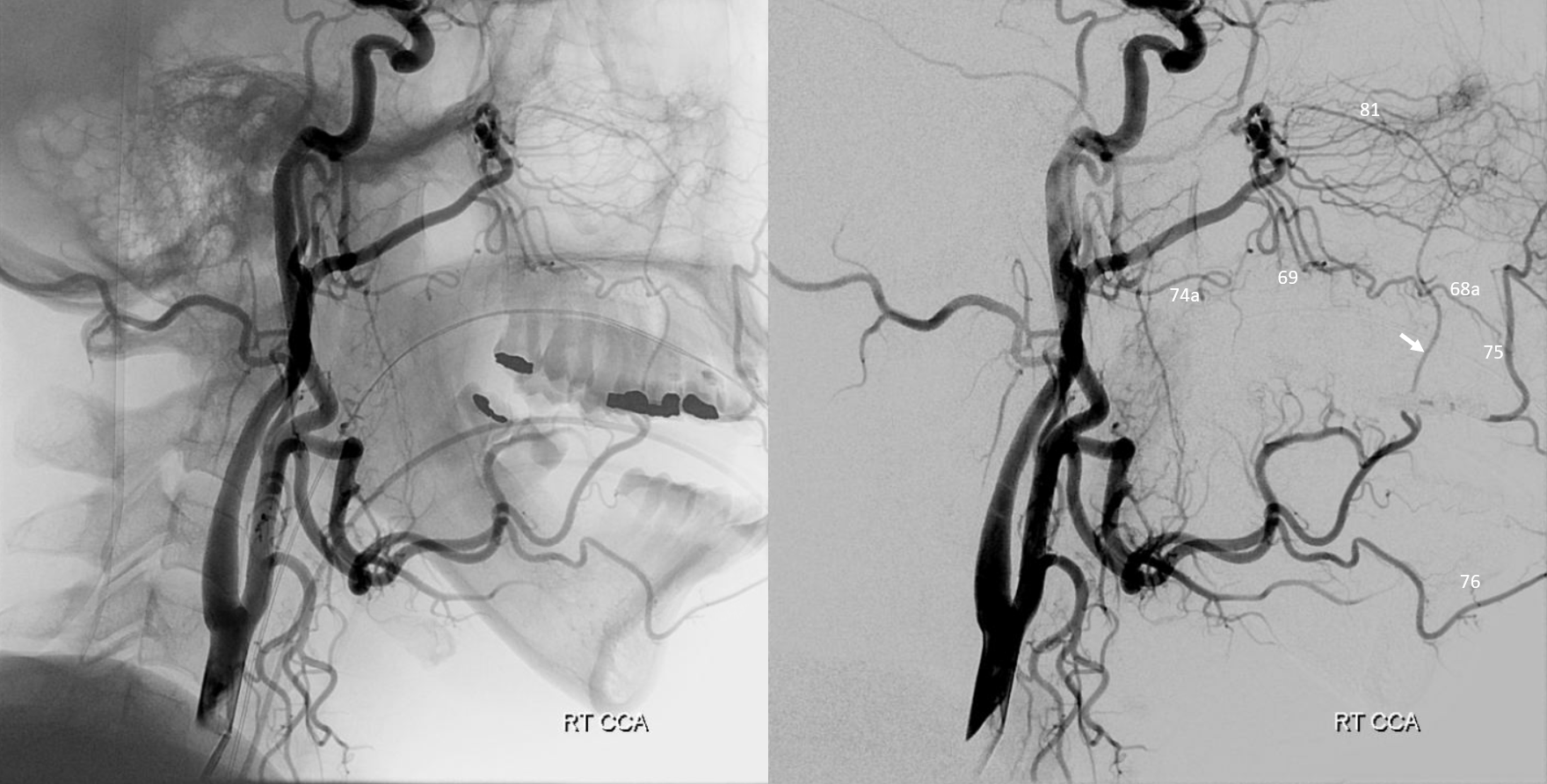 As in anything else.  The main issue with ECA injections is spasm.  It interferes with seeing the full picture, messes up particle embos, etc.

Here, injection does not visualize the infraortibal artery — barely seen in retrospect — because of spasm.  There are plenty of candidates to backfill the infraoribtal artery — its a test of collaterals of sorts. 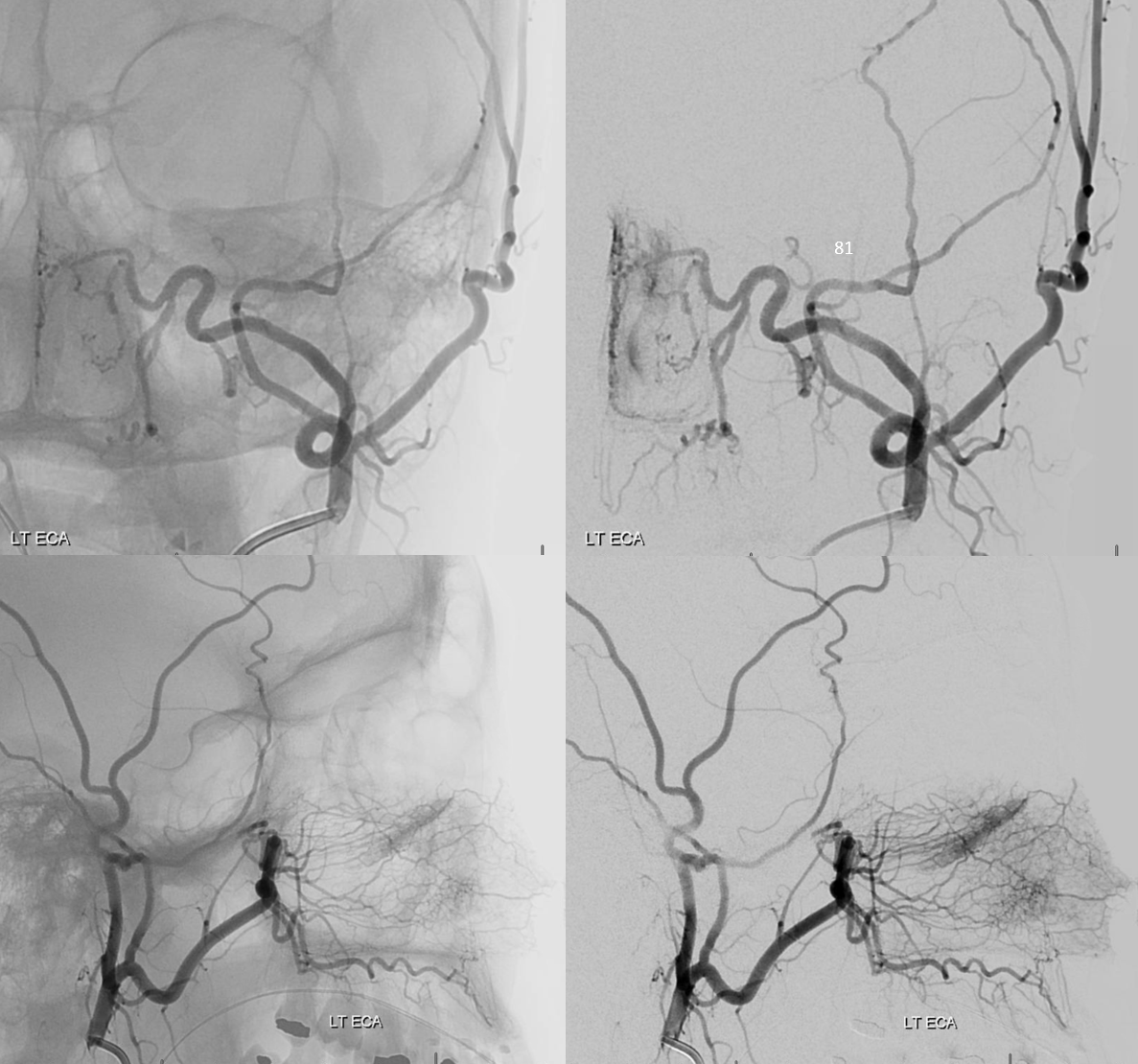 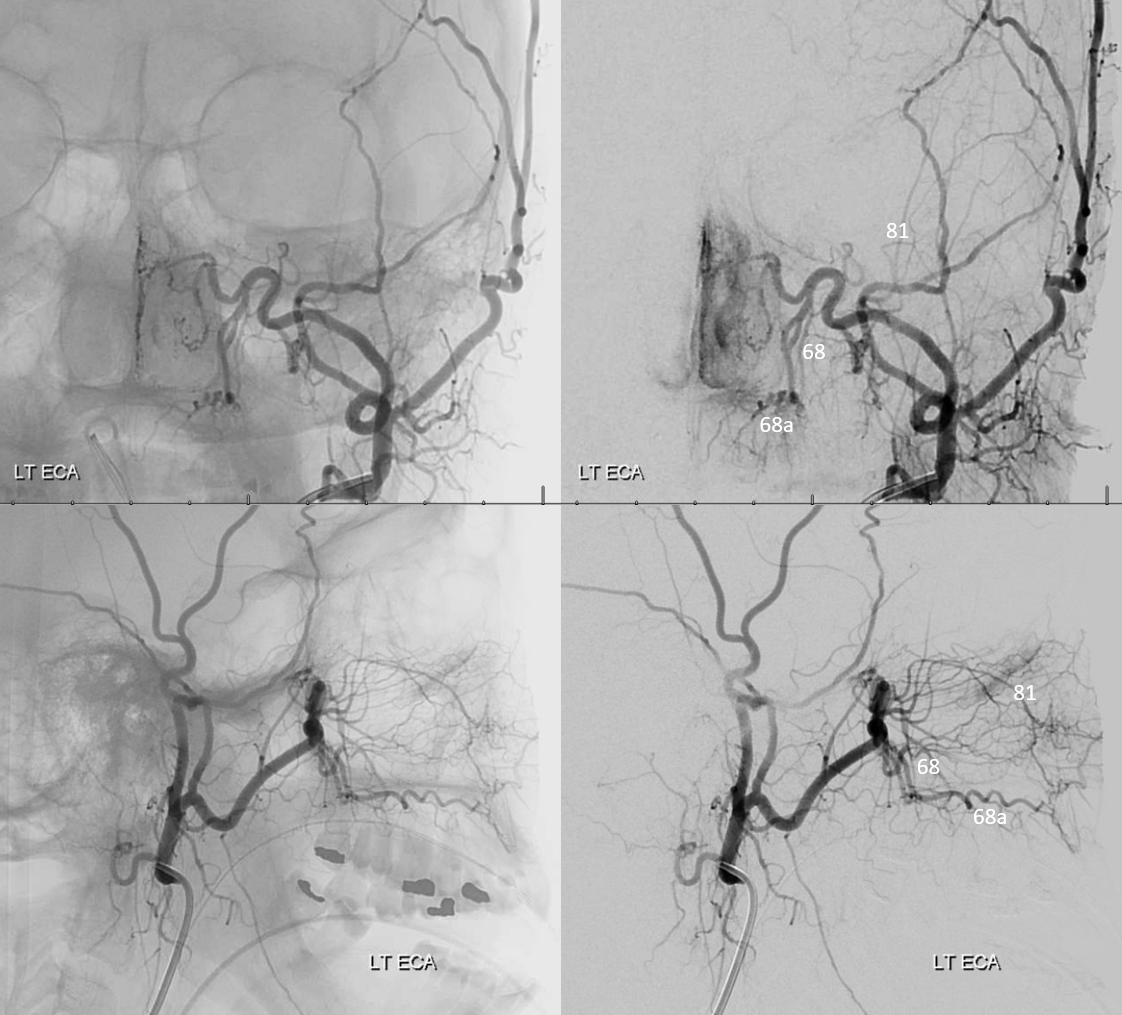