The MV artery originates from the petrous portion of the Internal Carotid artery.  The artery, typically, consists of two branches — the Mandibular and the Vidian.  Either or both branches may be present separately.

Both Mandibular and Vidian branches originate from the ascending petrous portion of the ICA in the foramen lacerum.  The Vidian branch courses forward to enter the Vidian canal (together with the greater superficial petrosal nerve) and exits into the pterygopalatine fossa, where it meets the Internal Maxillary Artery.   Think of the Vidian is a thin connection between the much larger ICA and IMAX.  In fact, the name Vidian artery is applied to both ICA and IMAX origin vessels, creating confusion.  The overall idea, again is a spectrum between ICA and IMAX dominance, which can be shifted by disease or intervention.

For the sake of clarity, we will call the branch either Vidian ICA or Vidian IMAX, depending on the vessel of origin. If you see a larger Vidian IMAX, there will likely not be a visible Vidian ICA.  Typically, the internal maxillary artery dominates supply of the regional tissues, which explains in part why the “Vidian ICA” artery is rarely seen.  The second part is technical — the Vidian canal is a small tube enclosed in dense bone, which does not help visualization.  The Vidian ICA artery is on occasion prominent when no pathology is evident (i.e. when IMAX contribution is for some reason minimized) and in this disposition supplies the vidian nerve and various structures in the region of the pterygopalatine fossa, such as portions of the posterior nasopharynx, nasal septum, turbinates, and surrounding musculature.  It is however often enlarged in setting of vascular diseases of the nasopharynx and adjacent tissues, notably juvenile nasopharyngeal angiofibroma.  Iatrogenic occlusion/sacrifice of the IMAX, such as during treatment of epistaxis, can also lead to Vidian enlargement.  Conversely, the Vidian occasionally enlarges after proximal occlusion of the ICA and may be one source of ICA reconstitution from the IMAX, albeit considerably less common or efficient than Ophthlamic or middle meningeal routes. The Ascending Pharyngeal artery (superior division pharyngeal trunk) also collateralizes with the Vidian in the pterygopalatine fossa.  The overall idea, again, is balance.

For the most extensive discussion of Vidian embryology in modern literature, please consult an excellent article by Dr. Osborn in Radiology.  Osborn, A. G. The vidian artery: normal and pathologic anatomy. Radiology 1980 (136) 373-8

Briefly, the Vidian artery is a “remnant” of the first aortic arch.  At 4-5 mm embryonic stage (i.e. very early) the first aortic arch regresses, and the remaining vessel assumes the name of Embryonic (of Fetal) Mandibular artery.  The first arch supplied structures related to the pharynx and future facial region. The mandibular artery and its vascular plexus continues this role until its territory is taken over by branches of the primitive hyoid artery (a second arch derivative), which in turn is later annexed by the developing external carotid circulation.  A tiny portion of the original embryonic mandibular artery territory may continue to be supplied by the adult version of the Mandibular artery.  The Vidian artery develops along with and supplies the Vidian nerve, a sympatheic/parasympathetic derivative of the First Branchial apparatus.  The embryologic memory of the MV artery as a first arch derivative explains why, in cases of IMAX hypoplasia or injury/closure, the Mandibulovidian artery supplies portions of the pharynx or nasal cavity. 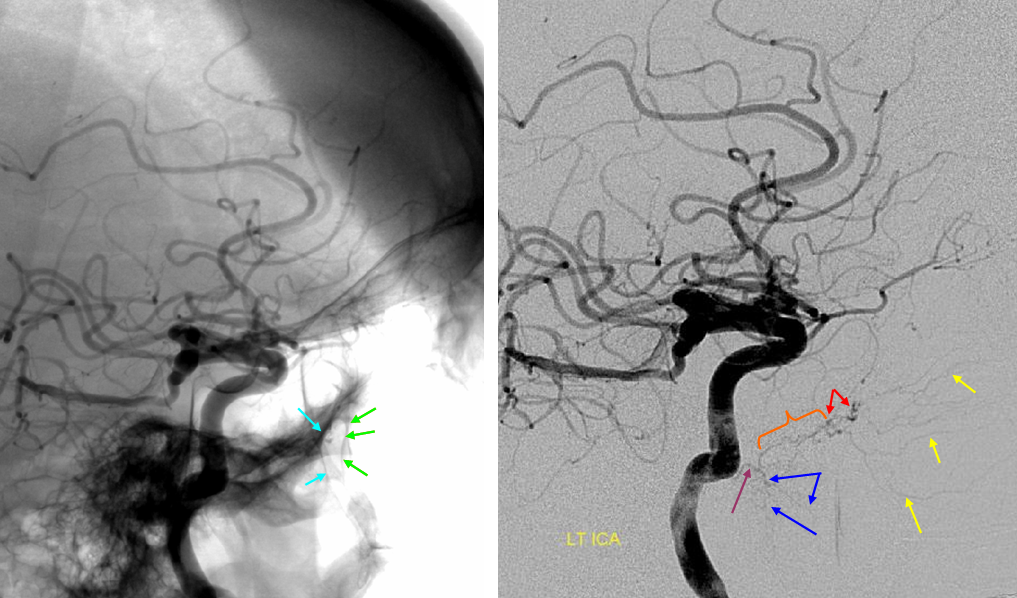 Native and subtraction Lateral (top) and AP (bottom) views of a particularly prominent mandibulovidian artery in absence of pathology.  The proximal trunk is labeled in purple.  The Vidian artery portion inside the canal is orange and projects above the mandibular portion.  The Vidian canal opens into the posterior portion of the pterygopalatine fossa which is a consistent landmark (blue arrows back wall, green arrows front wall).  The part in the fossa is marked with red arrows.  In this case, the artery supplies extensively the nasal septum (yellow arrows).  Typically, the nasal septum is supplied by sphenopalatine artery branches of the IMAX, which in this case is hypoplastic.  The mandibular branch is labeled with blue arrows and supplies tissues adjacent to the mandibular condyle. 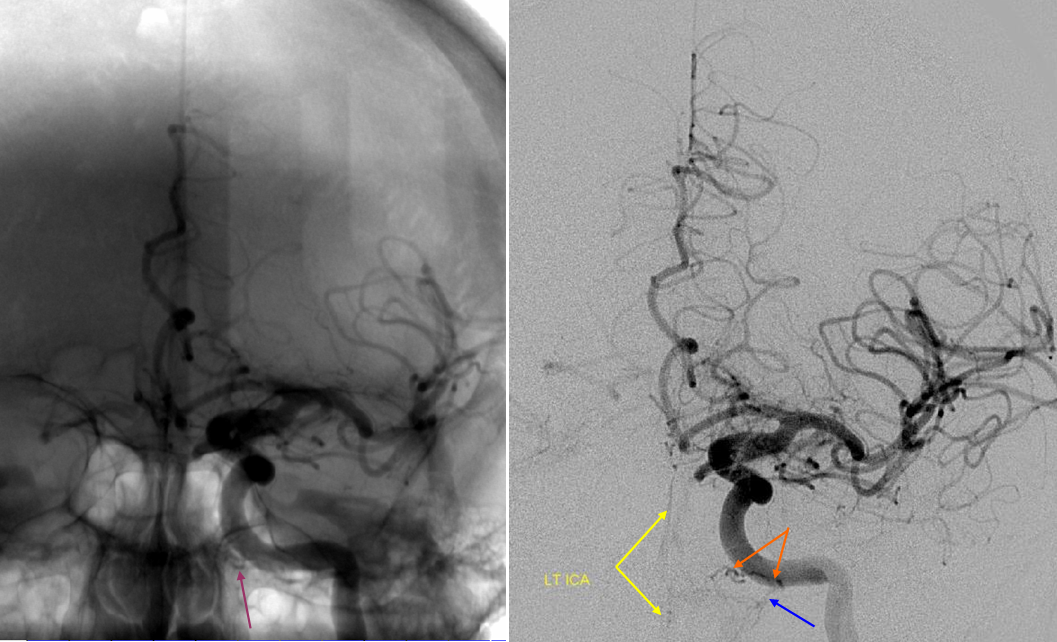 Vidian IMAX Branch — the more typical origin of the Vidian artery, it projects posterior to the terminal IMAX portion in the pterygopalatine fossa. 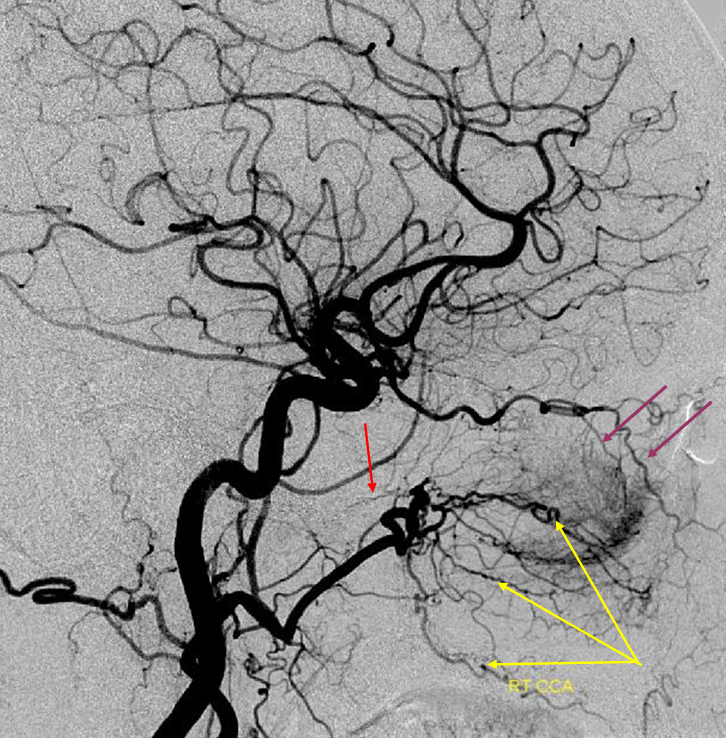 The Vidian artery (red) is a small branch projecting posterior to the terminal IMAX.  The foramen rotundum branch also projects posterior but would be pointing more rostral towards the cavernous portion of the carotid artery.  Notice prominent ethmoidal branches of the ophthlamic artery (purple) and the more typical supply of the nasal septum and turbinates via sphenopalatine branches of the IMAX (yellow)

Sequential axial CT images through the Vidian canal (red) connecting the proximal petrous carotid ICA (purple) to the pterygopalatine fossa (yellow).  The pterygopalatine fossa on the left is enlarged by a Juvenile Angiofibroma.  The vidian artery did not however participate in supply of the lesion, as seen on a pre-operative embolization angiogram (right).

Visualization of this kind of anatomy is greatly aided by flat panel CT such as DYNA CT.  Here is an example — vidian artery (52) axial views in vidian canal 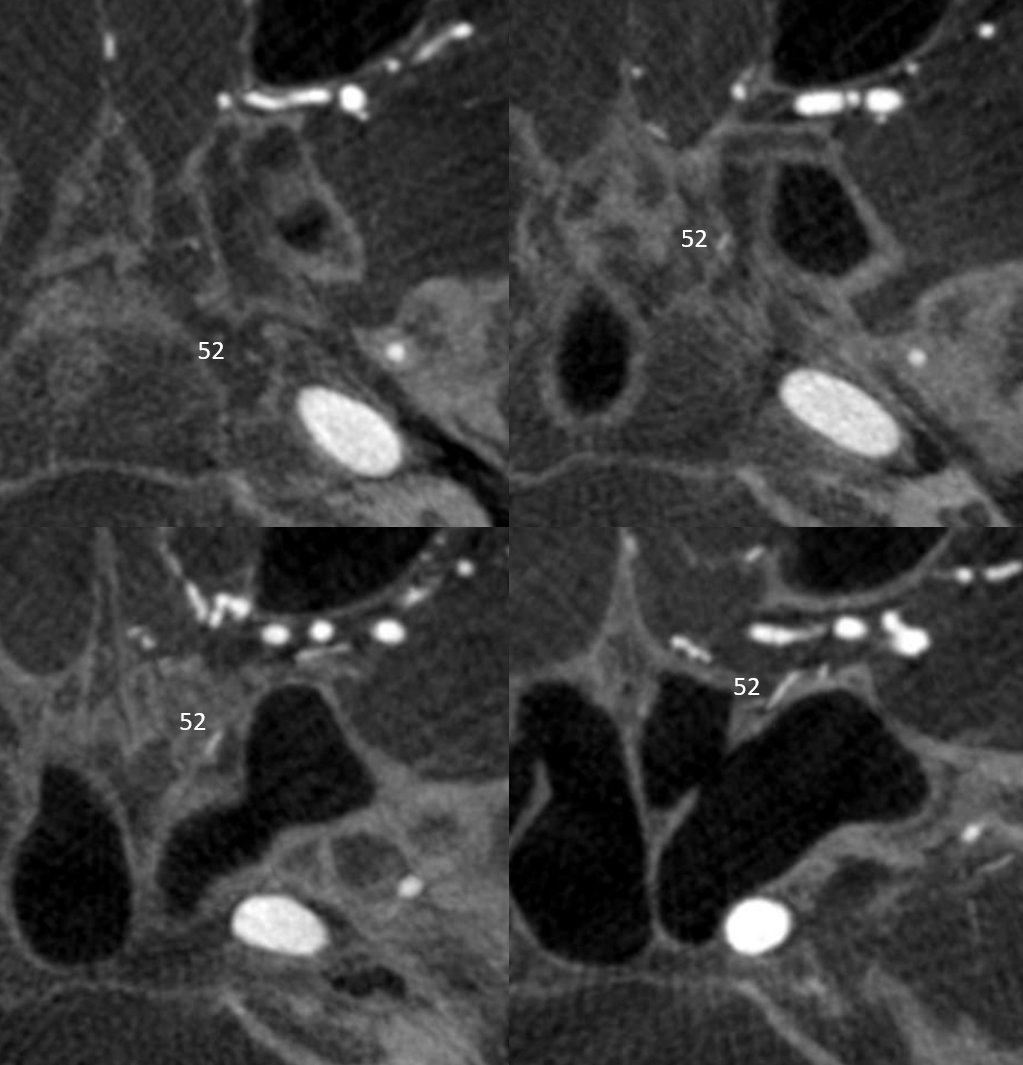 Coronals are better — there is also foramen rotundum artery (37) 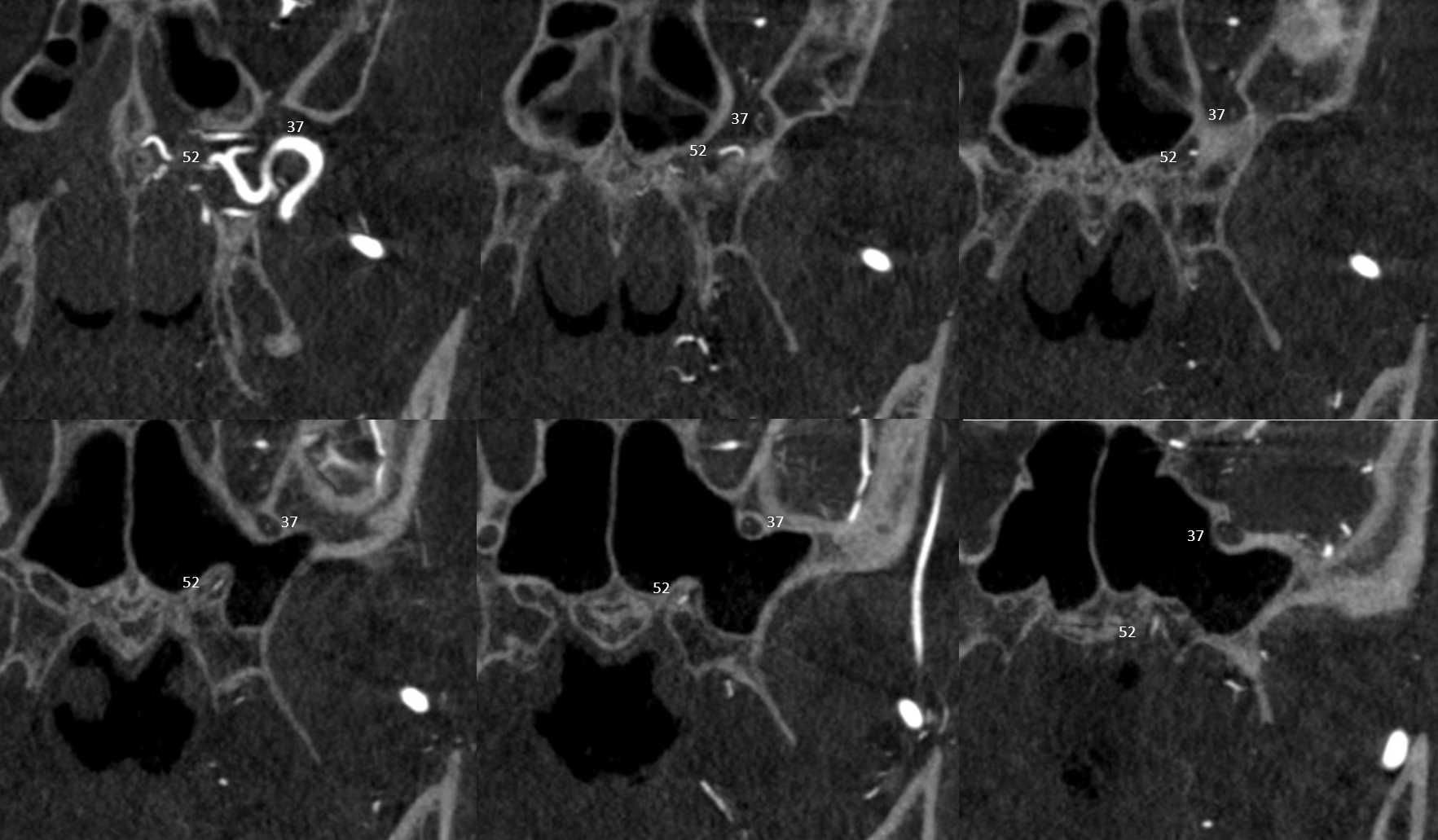 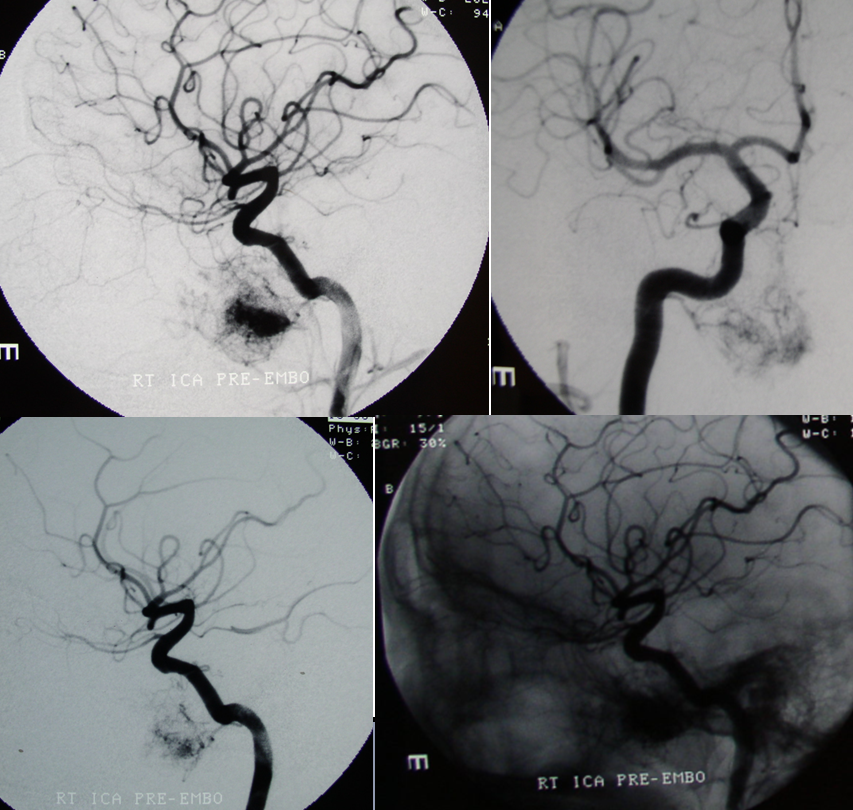 Emergency angiography performed after biopsy of nasopharyngeal mass, a JNA, shows extensive supply from the MV artery. Notice also extensive supply of same tumor via the superior division (red) of the ascending pharyngeal artery (orange) and sphenopalatine branches (purple) of the IMAX (pink) 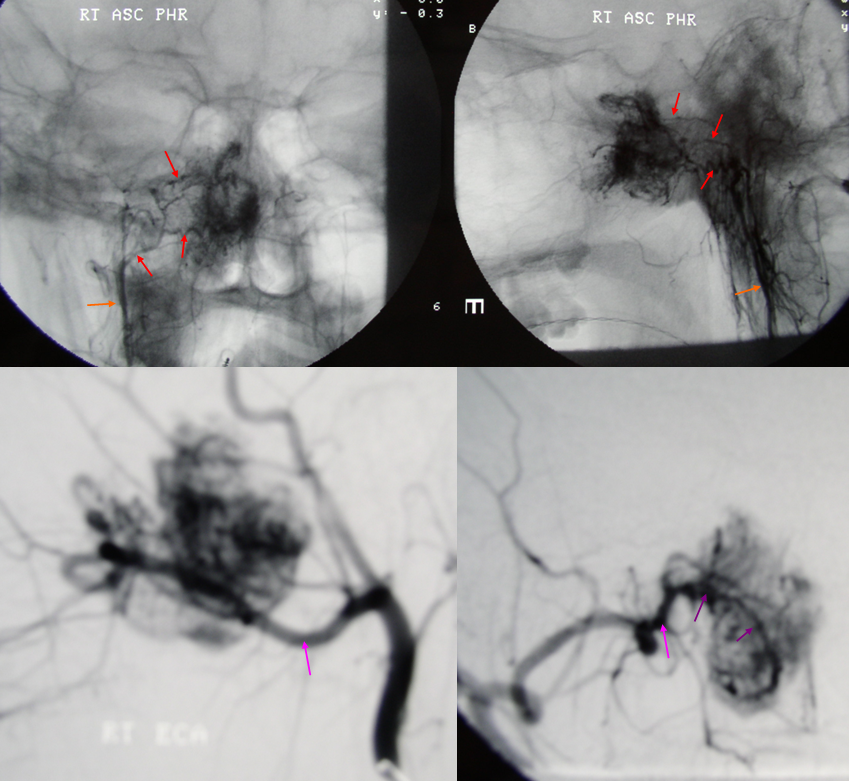 Another illustration of a prominent Vidian artery (arrowhead) supplying tissues of the nasal cavity and nasopharynx. 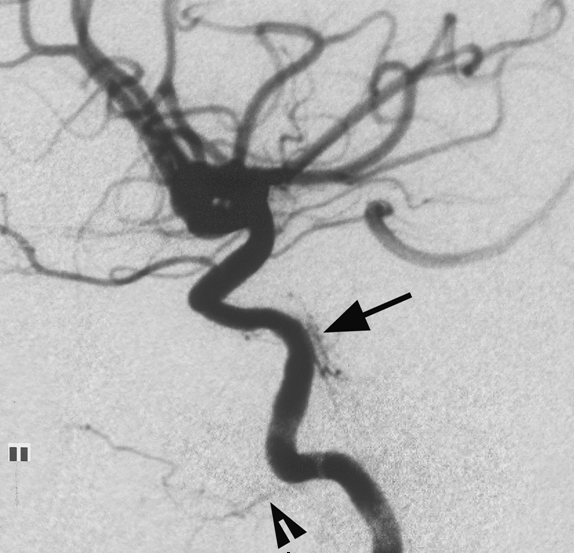 ICA reconstitution via the Vidian Branch

This is a relatively infrequent route of ICA reconstitution which can be important in setting of proximal disease or, in this case, balloon test occlusion.

From Jason W. Allen, M.D., PH.D., Anthony J. G. Alastra, M.D., and Peter K. Nelson, M.D. Proximal intracranial internal carotid artery branches: prevalence and importance for balloon occlusion test.  Journal of Neurosurgery 2005; 102(1) 45-52.
“Sequential DS angiograms images obtained during the initial BOT in the midcervical left ICA following injection of contrast material through the central lumen of the balloon catheter. Despite the arrest of antegrade flow within the cervical ICA immediately beyond the inflated balloon (black arrows), prompt washout of the contrast agent from the more distal petrous (white arrowhead) and supraclinoid (white arrow) segments of the ICA is evident based on the collateral inflow of unopacified blood through anastomoses with the Vidian and ophthalmic arteries, respectively.” Figure and description courtesy of Dr. Peter Kim Nelson.

Besides the IMAX, the Ascending Pharyngeal artery, through its superior pharyngeal branch, contributes to supply of the nasopharynx. A demonstration of this relationship is shown here. 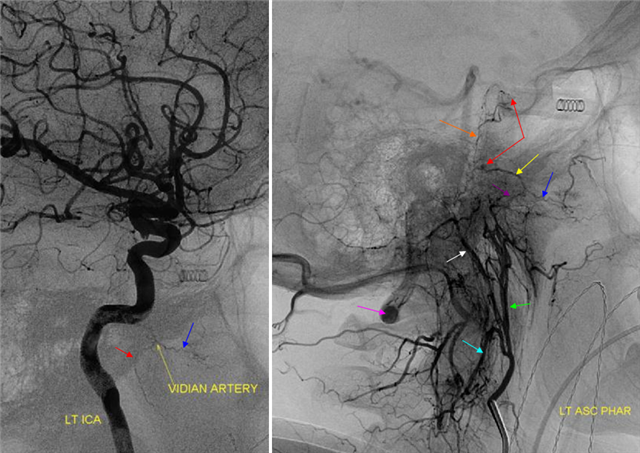 Lateral ICA projection injection (left) demonstrates a Vidian artery.  Lateral ascending pharyngeal injection shows a number of very instructive findings.  The pharyngeal trunk (green) of the AP, through its superior branch (purple) reconstitutes the vidian artery (yellow) with a faintly seen blush at its point of anastomosis with the ICA (red arrow).  Also notice, by way of interest, prominent ascending clival branches (orange) of the hypoglossal division of the neuromeningeal trunk (white) which anastomose with the cavernous ICA at the level of the meningohypophyseal trunk through its inferior clival branches (red arrow, upper).  The AP also has a prominent muscular trunk (light blue) which anastomoses prominently with the vertebral artery (purple). See also Ascending Pharyngeal section. 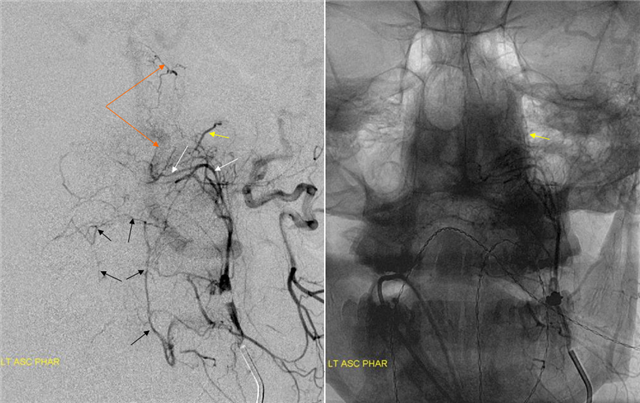 AP injection of the ascending pharyngeal artery of the same case.  The Vidian is marked with yellow arrow.  Notice also the odontoid arch system, well outlined by the black arrows.  This arch arises from the hypoglossal branch (white) of the neuromeningeal trunk.

Ascending Pharyngeal-MV collaterals 2: — an even better demonstration of a prominent collateral pathway between the superior division of the AP artery and the MV artery in a patient with intracranial MCA dissection.  The flow in the ICA is diminished due to decreased runoff into dissected territory, possibly exagerrating runoff into dural branches — ILT, MHT, and very well seen. 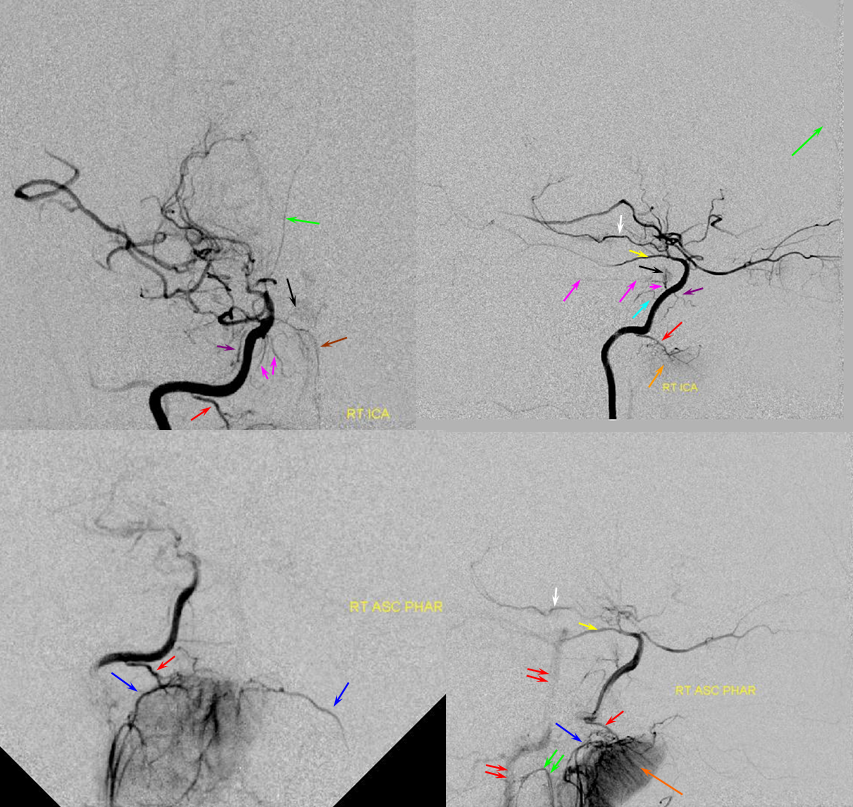 3-D DSA stereo view of a two branches of the mandibular artery (red).  The vidian portion is not present, as seen on another stereo pair below.  Both branches project BELOW the Vidian canal, the course of which is marked with purple arrows in the pair below.  The medial pterygoid process is labeled in blue and the ACA in yellow. 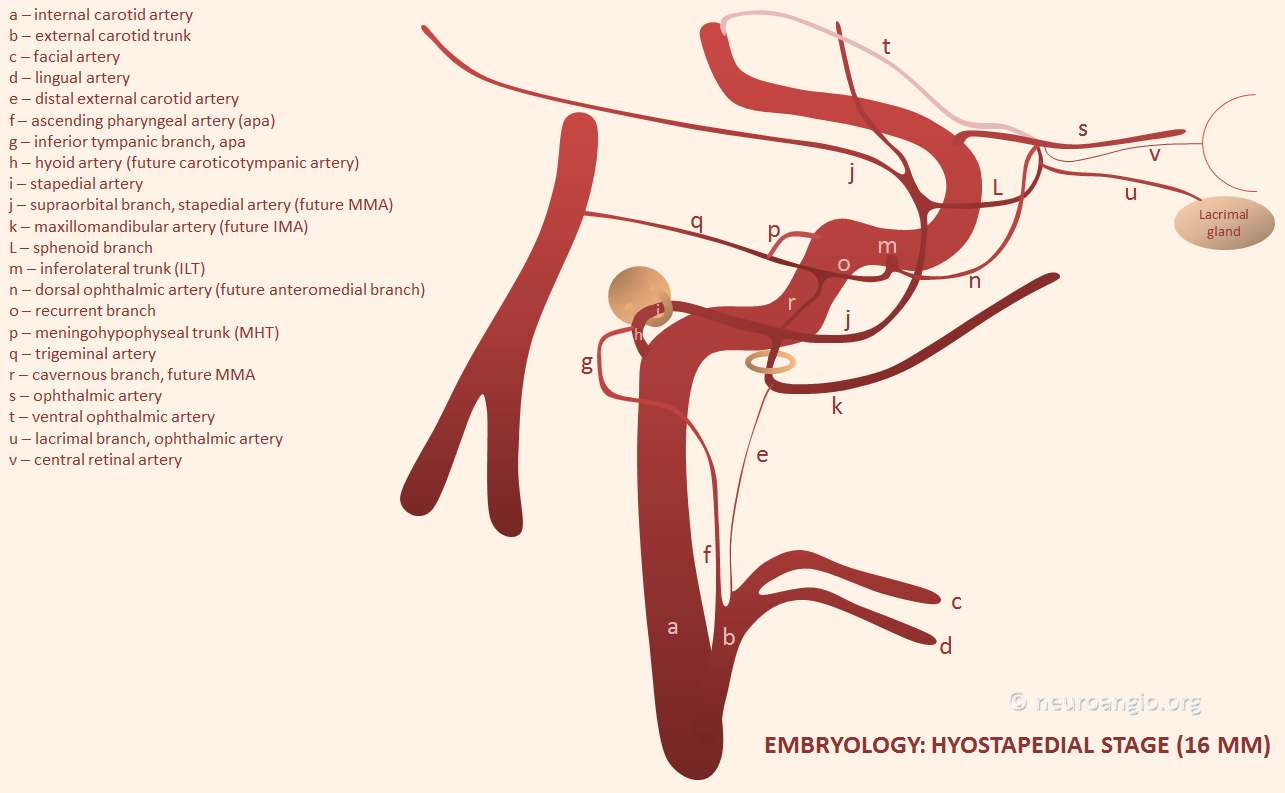 A supremely rare variant, supplied by Dr. Jonathan D. Clemente.  See Middle Meningeal Artery for much more info on this kind of spectrum.  Both MMA and IMAX are supplied by the vidian artery — yes, its not hyostapedial, but is on the spectrum of the same variant.  The only case we’ve ever come across.  Makes one wonder if the embryology theory is really valid, but here it is. 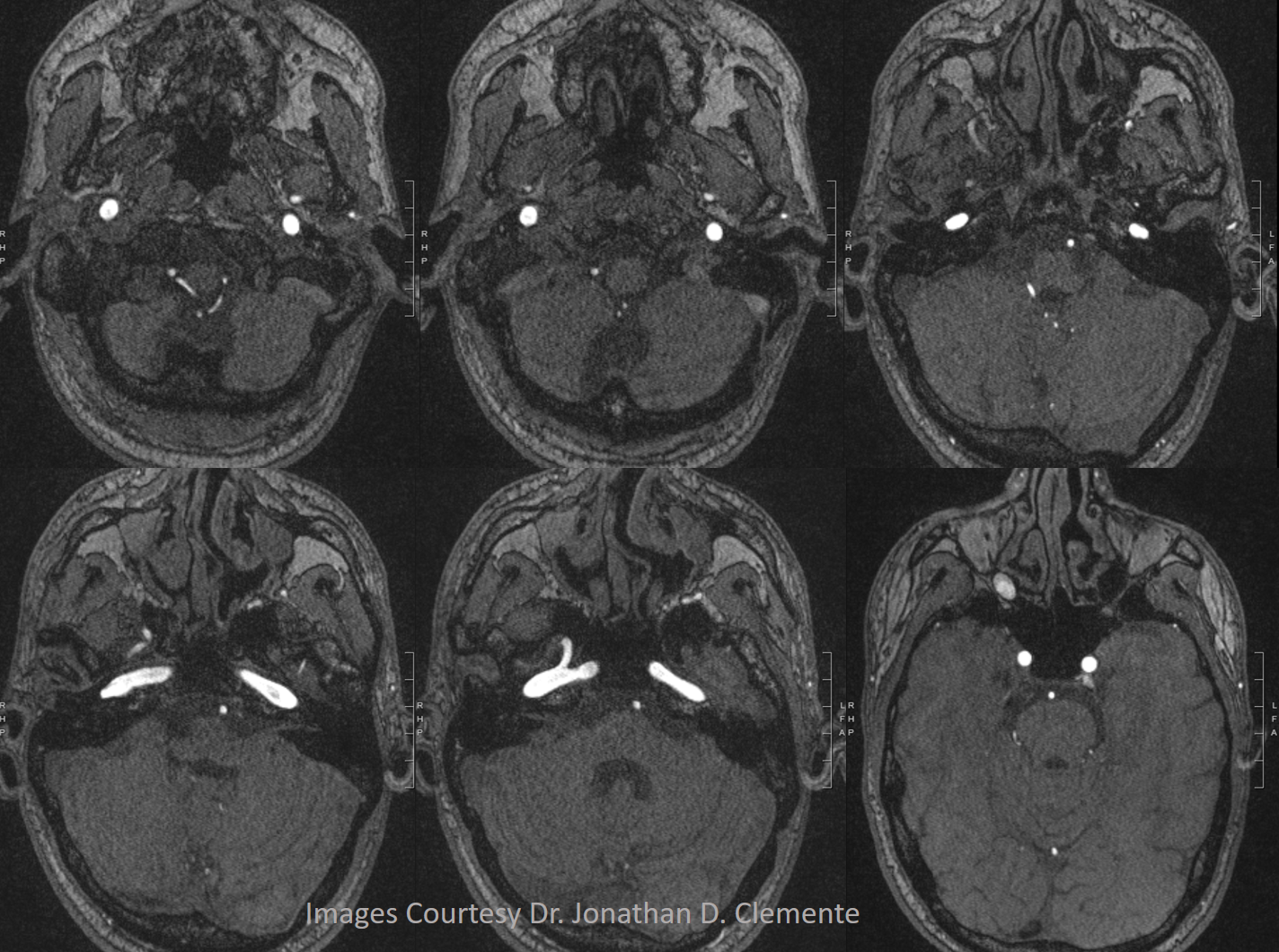 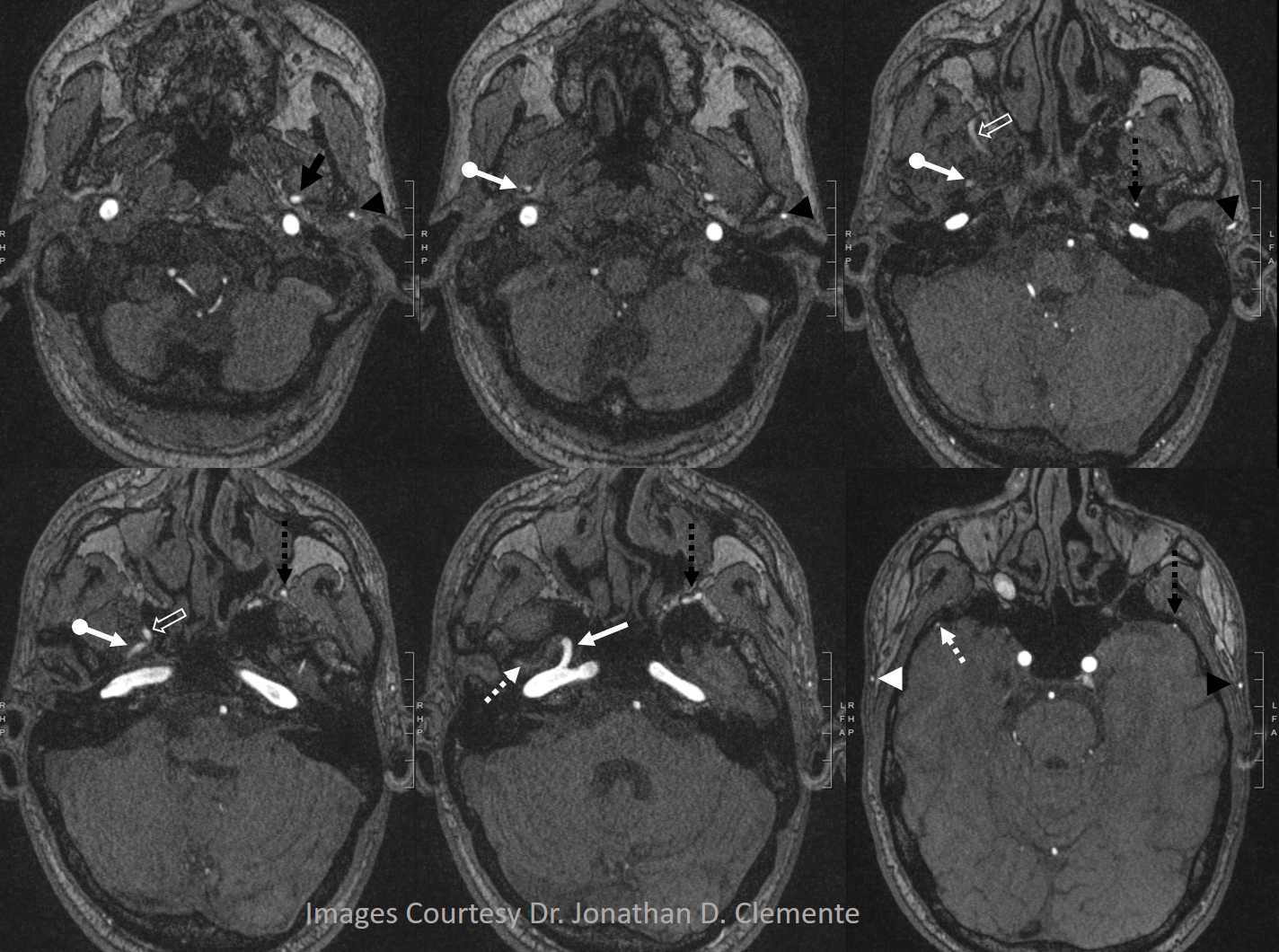 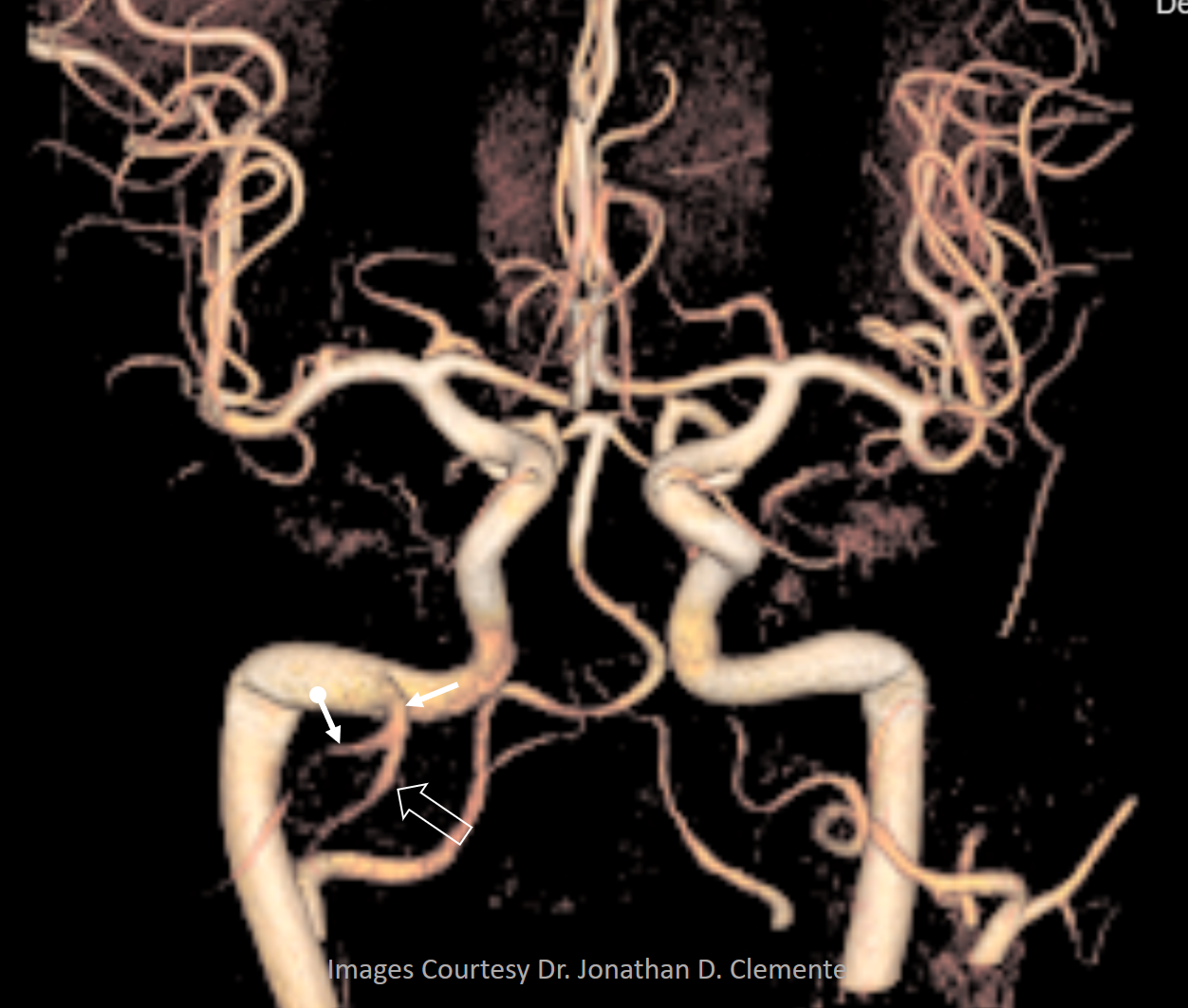 Mandibulovidian and ILT reconstitution of IMAX territory
An adaptive reconstitution mechanism along the spectrum of Dr. Clemente’s case.
Foramen rotundum branch and other branches are commonly recruited for IMAX reconstituion of ICA in setting of proximal occlusion.  The reverse may also take place following occlusion of the proximal IMAX, whereby the ILT feeds into the terminal IMAX in the pterygopalatine fossa.  Typically, the facial artery is a much more robust candidate for reconstitution, so for ILT to become recruited the facial artery usually must be MIA as well. This is the case here, as the patient has had multiple surgeries for mandibular malocclusion and other issues.   The upper left ECA injection demonstrates occlusion of the distal ECA trunk (pink) with reconsitution of the distal IMAX via two collateral branches (dark green and purple).  The earlier (bottom left) and later (bottom right) images status post coiling of the ECA (bright green) demonstrate robust reconstitution of the pterygopalatine fossa IMAX (yellow) via foramen rotundum (light blue) and foramen ovale (red) branches of ILT (cream), as well as from the mandibulovidian artery (orange).  The sphenopalatine (white) and descending palatine (blue) branches of the IMAX supply the palate and nasal mucosa and extend quite anteriorly on the later phase image.  ALso note reconstituion of the Middle Meningeal Artery (brown) via retrograde flow thru the above-mentioned IMAX channels (purple and dark green) into the ECA above the coils (pink).  Incidentally noted is presence of a prominent anterior meningeal artery (black) arising from the ophthalmic artery. 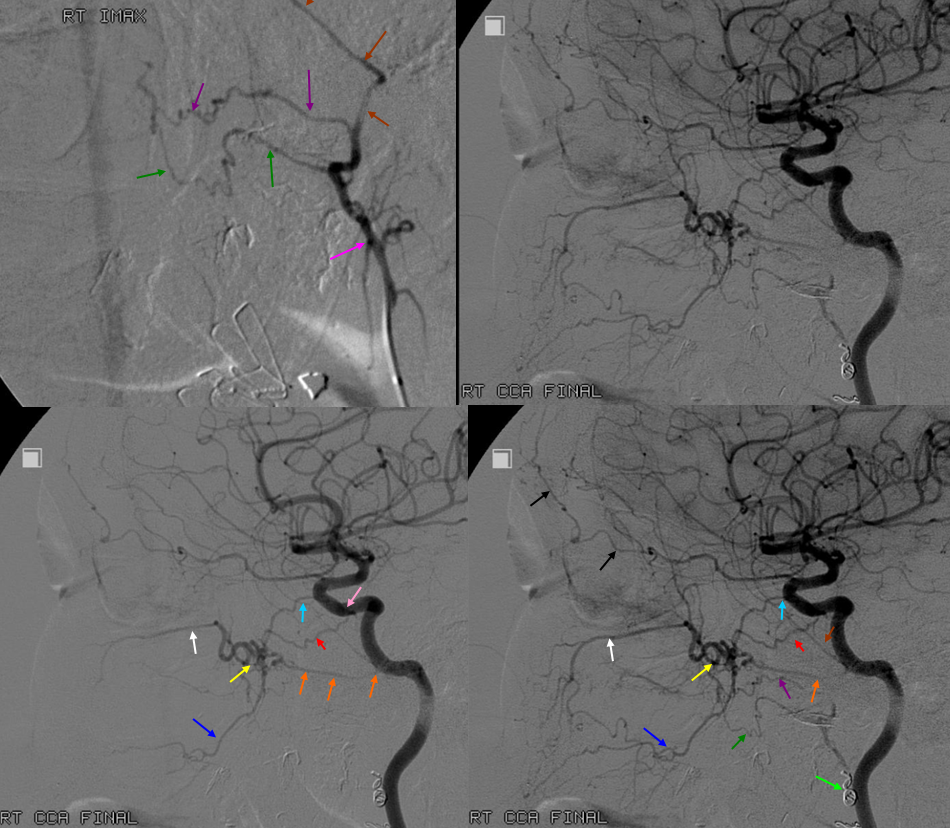