We see many patients with incidentally discovered Developmental Venous Anomalies or DVAs.  The typical history is someone has an MRI done for whatever reason (headache, dizziness, etc.) and a DVA is found.  The two natural questions are: what is a DVA and how safe or dangerous is it, and does the DVA have anything to do with my symptoms.  The answers, almost always, are that the DVAs are not dangerous and have nothing to do with symptoms that prompted the MRI.  Of course, there are exceptions and I’m not just saying that for “cover”.  However, the exceptions are rare.

What is a DVA?

DVA or Developmental Venous Anomaly is pretty much what it sounds like.  It is a peculiar vein which goes back in time to when we were tiny little embryos, about a fifth of an inch (5mm) long.  Back then, when the brain was just beginning to form, its veins were very different from what they are now.  As we grew from a fraction of an inch to a very respectable 2-3 inches, our brain veins changed a lot, pretty close to what they are like now.  At least most of them — except for the few that stubbornly refused to evolve, and so are forever stuck in the early “developmental” stage.  Why they felt like staying forever young we don’t know, but they did — and from our muggle adult perspective we call these Neverland veins “anomalies”

How common are they?

To a muggle, everyone is normal.  For others, magic is everywhere.  The answer depends on perspective.  The better our MRI machines become, the more of them we see.  At least 5% of adults have them

Where in the brain can they be found?

Anywhere there is brain.  There are no reports of DVAs in the spinal cord, however our equipment is not good enough yet to see it in necessary detail.

What do they do?

They work just as hard as any goody-two-shoe proper veins of good family stock do.  In fact, probably even a bit harder.  What do veins do — they take blood back from the brain and help return it to the heart, so it continues on its rounds through your body as long as your own particular heart continues to keep you alive.

Do I need my DVA?  Maybe I don’t care to be in touch with my inner child — I just want it out of my system

Yes, you very much need your DVA.  In fact, more than any “normal” adult vein.  The fact is, just like children can be so endearingly stubborn and inflexible (right?), so are the DVAs.  Adults are “flexible” — we rationalize and “reason” our way through all kinds of choices ranging from unpleasant to unfair to much worse.  Our veins are the same way — they are built with tremendous flexibility — if one malfunctions or gives up, another one will usually be right there to pick up the slack.  Seriously, though, that’s a very good thing — any biologic system designed with flexibility has advantage.  DVAs are inflexible — the vast majority of DVAs will faithfully work on draining their brain territory without pause or complaint all life long.  However, in the extremely rare instance when a DVA stops doing its job well — say because of a clot in it or some other astonishingly rare thing — there is usually no other vein to come to rescue.  How often does this happen?  Pretty much never — a DVA is a very hard-working and diligent inner child.  You are certainly better off worrying about the usual suspects that kill most of us — like hypertension, high cholesterol, obesity, smoking, cancer, drunk driving, fentanyl-laced powder — even lightning in the sky, rather than your friendly inner DVA child.

How can you prove it?

About 50 years ago there was a way — you could have your DVA taken out to see what happens.  In fact, when DVAs were first discovered, and their necessary role in drainage of normal brain was yet unknown, some surgeons have gone ahead and removed them, mistankenly thinking they were another kind of vascular anomaly called AVM.  An honest but tragic mistake — the result was a stroke, because the brain which the DVA served had no other vein to turn to.  You might have to do a bit of research these days, though, to find a brain surgeon willing to remove yours.

Are there exceptions to this?

Of course.  The hypochondriac in us is always searching for the next imaginary calamity.  When you google “DVA and stroke” or some other equally silly search string, reports will come up.  Precisely because the exceptions to the rule that DVAs are harmless things are so rare that they are reportable.  About half of those are bad quality reports that got the facts wrong and blamed the DVA on something that happened in its neighborhood but for which it actually bore no responsibility.  I am sure this kind of thing never happened to you or anyone you know (or knew).  However, the facts do get more complicated.  In fact, DVAs do sometimes make friends with bad actors — childhood innocence, I guess.  The most common of these deviants is something called “cavernous angioma” or “cavernoma”.  A cavernoma is a venous vascular malformation that is also pretty common (maybe 1% of adults).  Unlike the DVA, a cavernoma is an entirely unnecessary thing to have in your brain if you happen to have one and, unfortunately, it does bleed from time to time.  Fortunately, most of them don’t bleed a lot or often enough to cause problems.  However, in the brain location is everything, and cavernomas can be anywhere.  A small thing in a critical spot is much worse than a large thing someplace else.  Cavernomas, tragically, do kill and maim some of their victims, though even this is quite rare these days.  Now, most people with DVAs don’t have cavernomas and most people with cavernomas don’t have DVAs.  However, about 10% of the time a cavernoma is found next to a DVA. Why they choose to be friends — we don’t know.  In fact, we really don’t know very much about anything still. We do know DVAs have been blamed for bleeding that really came from a nearby cavernoma rather than from the DVA itself — an important distinction, because many cavernomas that cause trouble can and should be either surgically removed, while DVAs are classic “do not touch” lesions.   Other very rare exceptions are possible — sometimes DVAs don’t do a good enough job draining their brain territory. The brain becomes dysfunctional, which can lead to seizures or other problems.  This kind of thing is astonishingly rare.  Very, very, very much more rare than the number of people who ignore their hypertension, cholesterol, weight, and other usual suspects and therefore die totally preventable deaths.  So, don’t let that happen to you — if you choose to keep worrying about your DVA, at least do it while on the way to your annual physical.

What about the undisputed fact that all bad, unusual, and rare things always happen to me?

If you have proof that your DVA caused your seizure or your bleed or whatever, let me know by writing here.  Just don’t blame DVAs for headaches, dizziness, fatigue, and other very real and sometimes very troubling symptoms that have never been lined to a DVA in any way, shape of form.  Think of it empirically — the only way to prove that a DVA is a cause of your dizziness is to remove the DVA — see above for advice on this.  Otherwise, you just have to trust that DVAs don’t do that.

I want to see pictures of a DVA! Is it a boy or girl?

Of course.  As you can see from this website, we love pictures.  Now, you should know then that some of these pictures were made by us, and others by a very important pioneering neuroradiologist called Yun Peng Huang, whose work together with a number of mostly Japanese colleagues, more than anyone else’s, helped the world understand what a DVA is and what it is not.  A section of this website is dedicated to him as a “Yun Peng Huang Library”  In tribute to Dr. Huang, many of his original, beautiful images are used here.  At that time, DVAs had a different name — Medullary Venous Malformation.  Which is why there is a separate section of this webisite called “Medullary Venous Malformation” where you can see many of the same images as shown here

Below is an image of veins in very early embryo, when a very thin brain is drained by veins that take care of both outside (superficial) and inside (deep) parts of the brain. This is normal for this stage of development 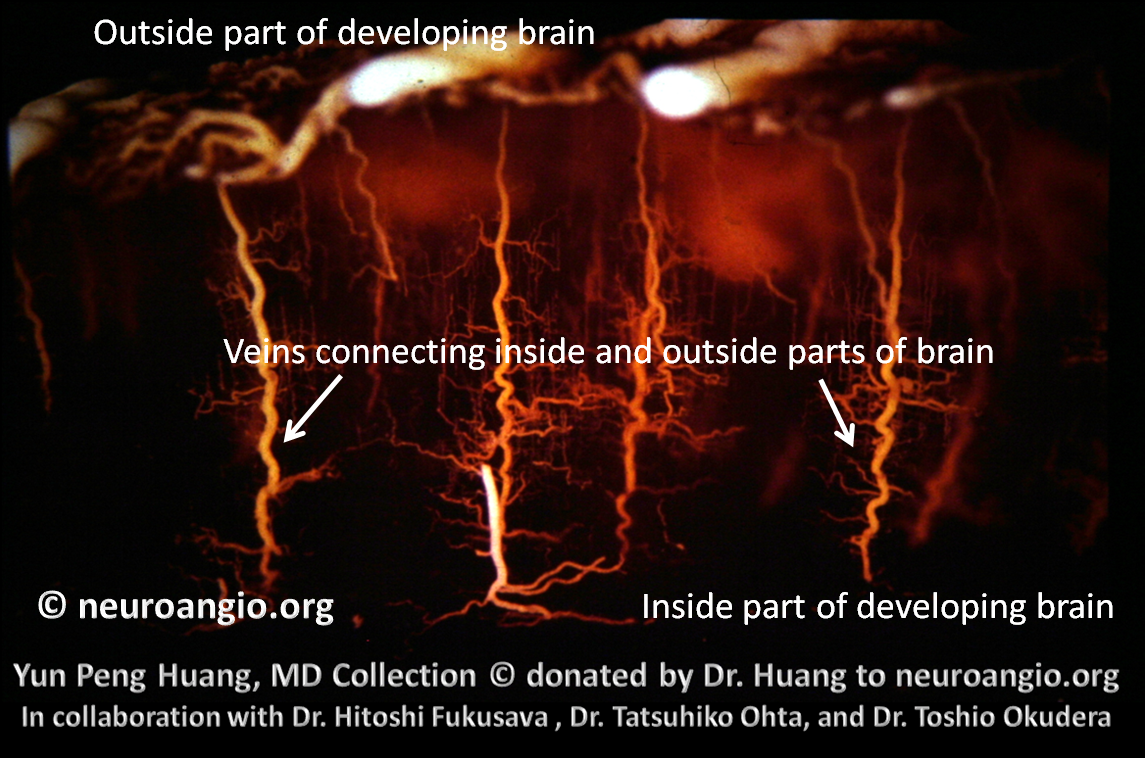 At a later stage of development, the brain grows too large for one venous system, which leads to development of separate systems for the superficial and deep parts of the brain.  Except for a few “transmedullary” veins which continue to run the whole length of the brain, connecting the deep and the superficial parts.  These are the normal veins which sometimes give rise to the DVA 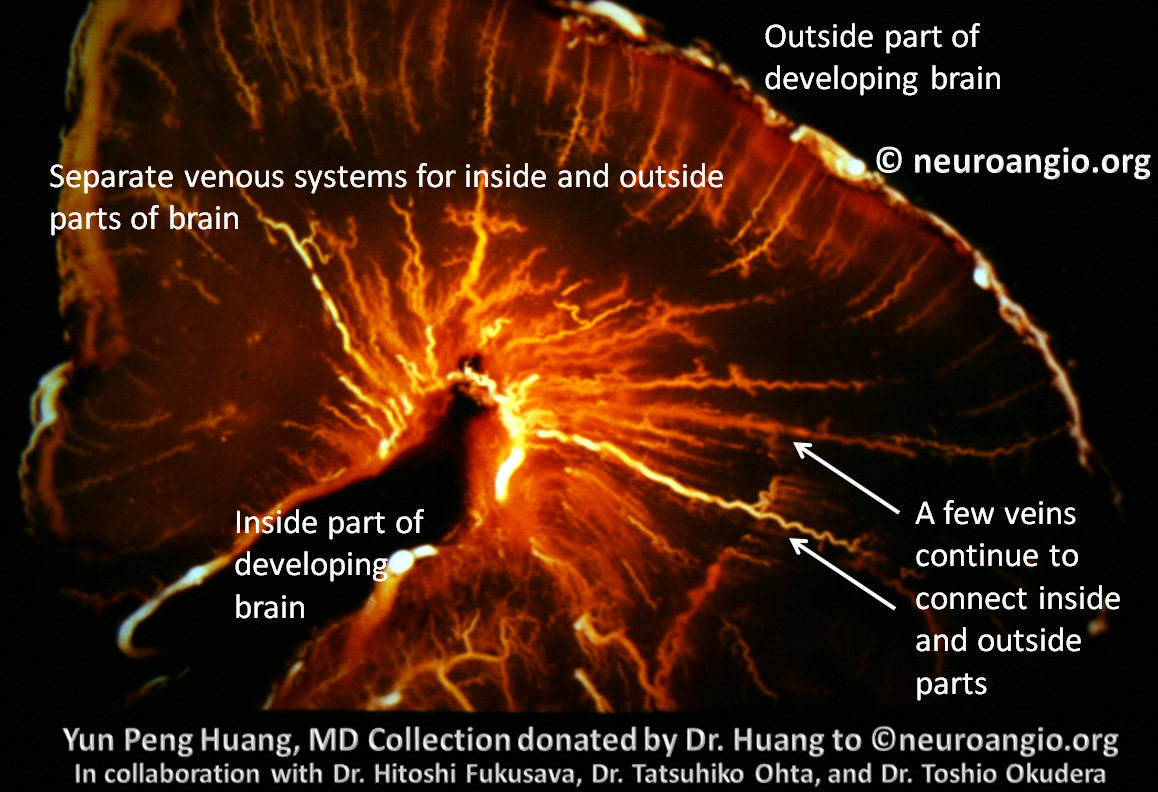 Here is a schematic by Dr. Huang showing what a DVA is like.  Looks like an umbrella or palm tree.  Many branches (purple arrows) come together onto a common stem (black arrow).  The common stem is like a “transmedullary” vein that is responsible for more brain territory than a normal transmedullary vein would.  The appearance of the DVA is also classically called “Caput Medusa” or the head of Medusa.  In reality they look much more like palm trees. 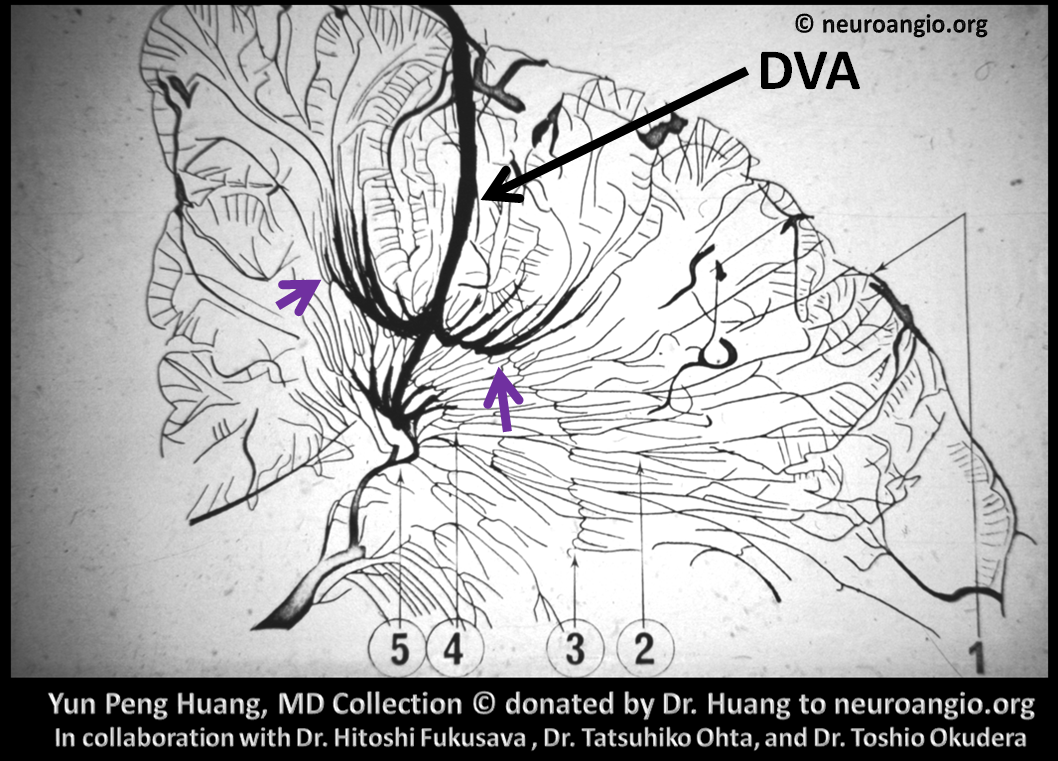 Another schematic drawing, showing different types of DVAs.  Some drain superficially (I and II) towards the outer surface of the brain, while others towards the deep surface (III-V) 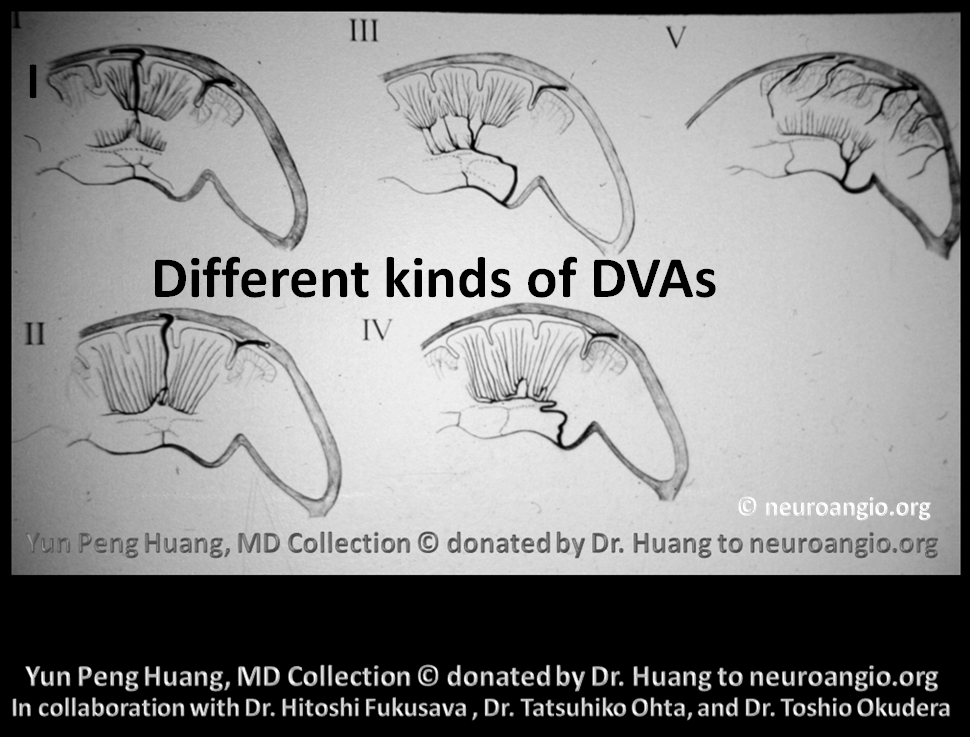 A typical DVA (white arrow) on a vintage cerebral angiogram, circa 1980 — the dawn of CT technology. MRI did not yet exist. 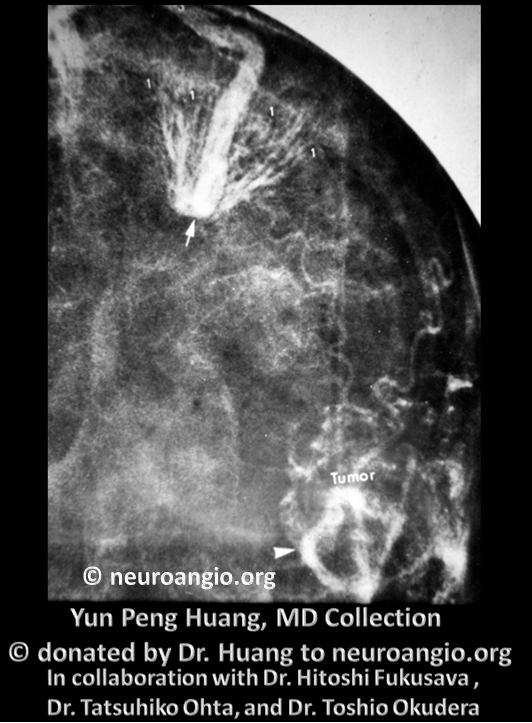 A large, deep draining DVA on a later, subtraction angiogram from mid-80s.  It is a real giant and, as most of them, asymptomatic 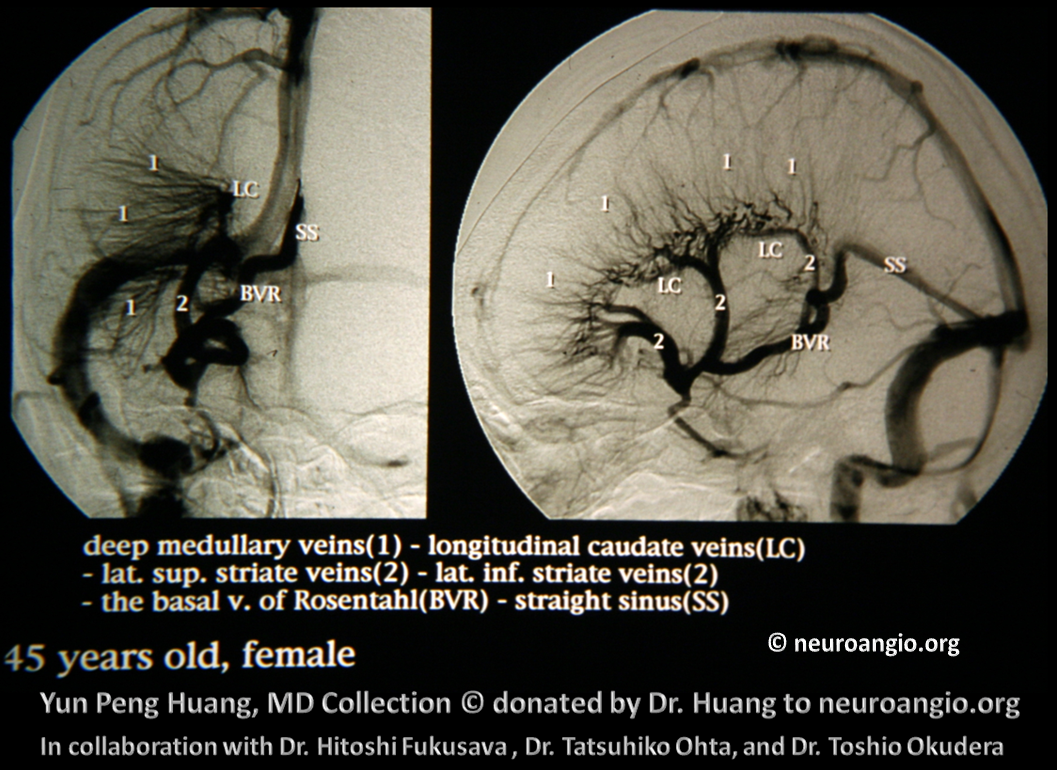 A modern MRI of DVA in the right frontal lobe.  Although DVAs were discovered using catheter angiography, the vast majority of them are now found on MRI.  In most cases, a catheter angiogram is not necessary to diagnose a DVA

Another view (axial) of the same DVA 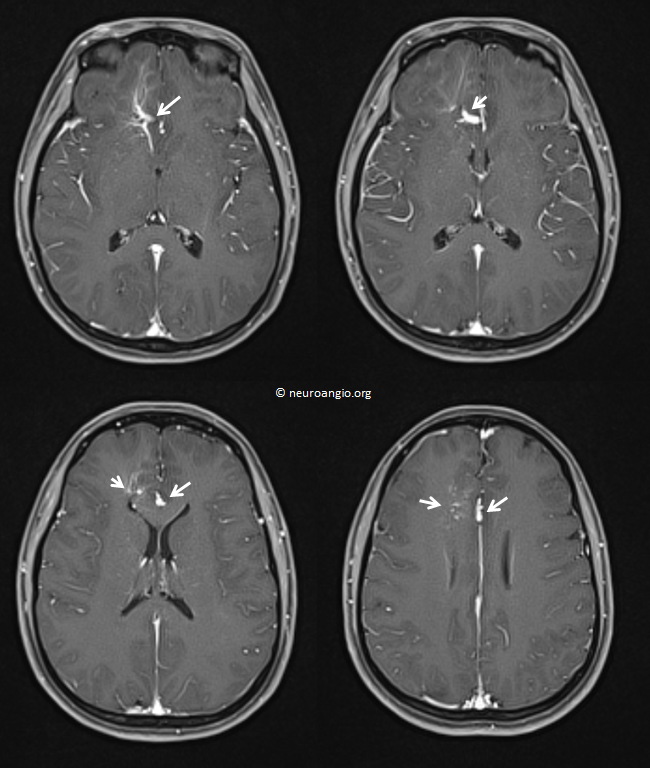 MRI of a very large DVA involving the central, critical part of the brain (brainstem) and cerebellum. Again, asymptomatic.

Finally, a large DVA with its brain territory within the blue oval.  The white arrow points to an adjacent cavernoma, which is the source of this person’s symptoms. 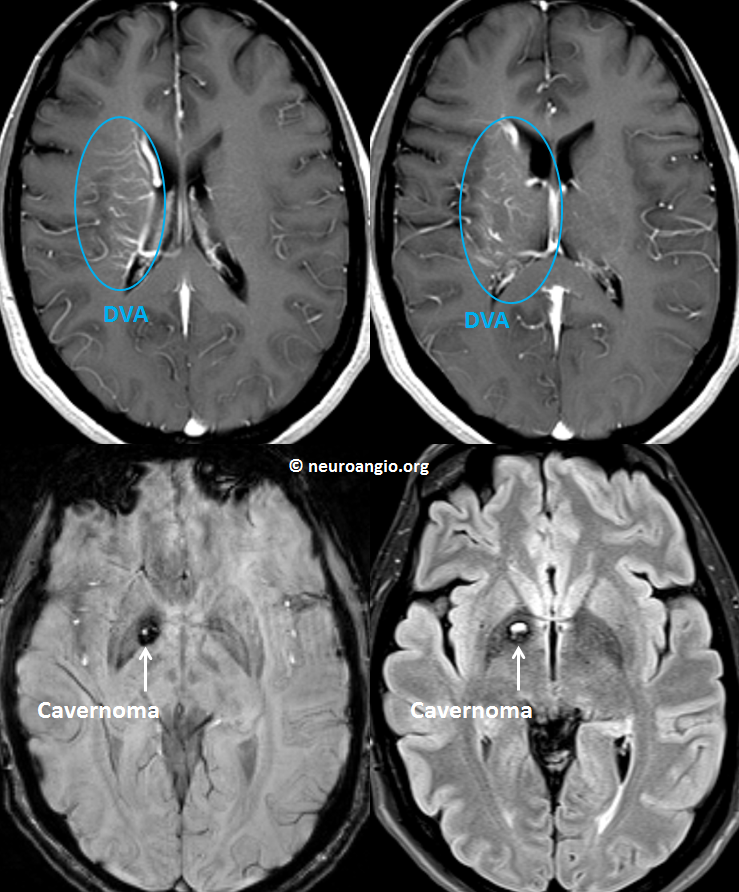 Questions/Concerns: Write here.  And, of course, remember that this page is not intended to diagnose or treat any disease.  Talk to your local expert or come see us.