Don’t see this one every decade…

An individual with a passion for weightlifting dissected his left vertebral artery, thus sustaining a then-asymptomatic PICA territory stroke, as seen below.  Notice sparing of the medullary segments, as any self-respecting asymptomatic PICA stroke would.  CTA images show corresponding contrast in vessels adjacent to the left lateral medulla. 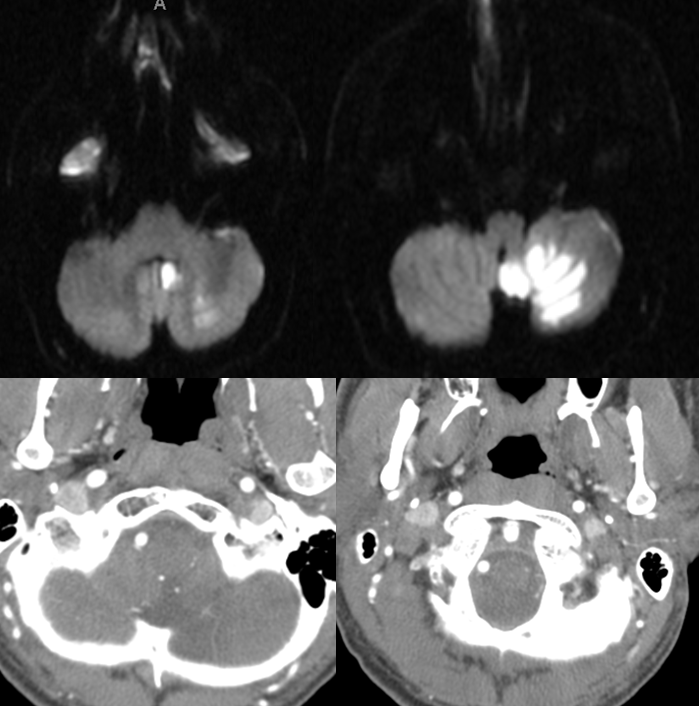 The individual continued to indulge in the weightlifting passion, and several years later developed a sudden, severe headache.  He was taken back to the same hospital, where SAH (red arrows) was duly diagnosed.  CTA shows more contrast in the lateral medullary area (purple arrows), including a somewhat irregular vessel near the upper purple arrow. 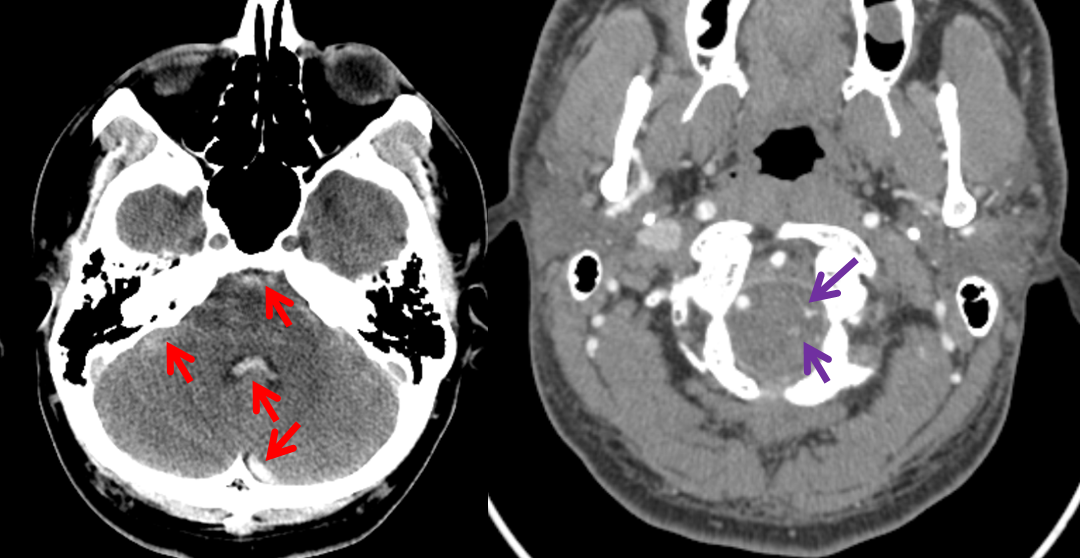 All of this important CTA detail is lost during reconstruction, which only shows a distal vertebral stump (red arrow). 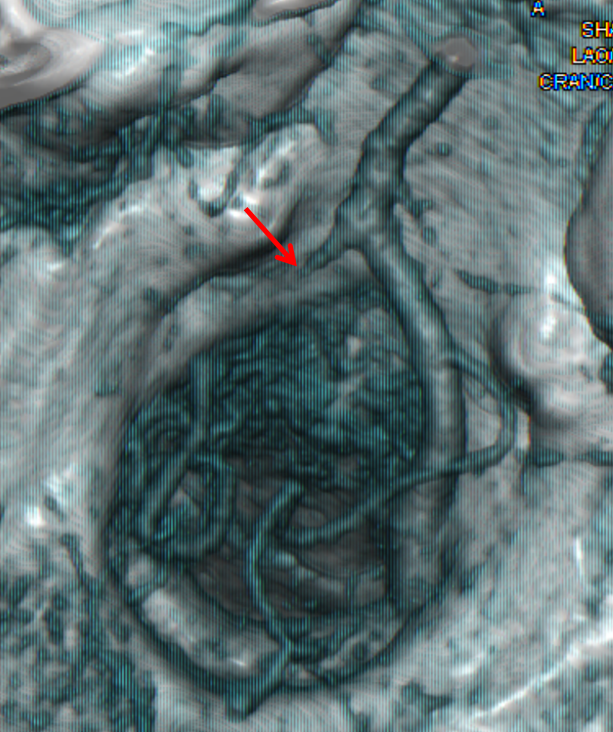 Digital subtraction angiography of the left vertebral artery in frontal (left) and lateral (right) projections demonstrates a proximal intracranial vertebral artery stump (white arrow).  The PICA (purple arrows) is reconstituted at its vermian segment by a vessel (red arrows) arising from vert near its stump.  This is the lateral spinal artery, a homolog of the spinal arterial anatomy and a key vessel in the embryologic makeup of the cervicomedullary junction.  The reconstitution is not accidental. This route is well-described in Lasjaunias and Berenstein’s “Surgical Neuroangiography”, both editions.  It can be recognized as a normal variant in the so-called C1 origin PICA, in which case direct medullary perforators are often present from the vert itself. Imagine, in this case, that the PICA is indeed originating at the vert stump, as it would be in a C1 variant.  This is the same disposition, except secondarily acquired due to prior vert dissection, which led to occlusion of the primary PICA ostium, with its distal reconstitution 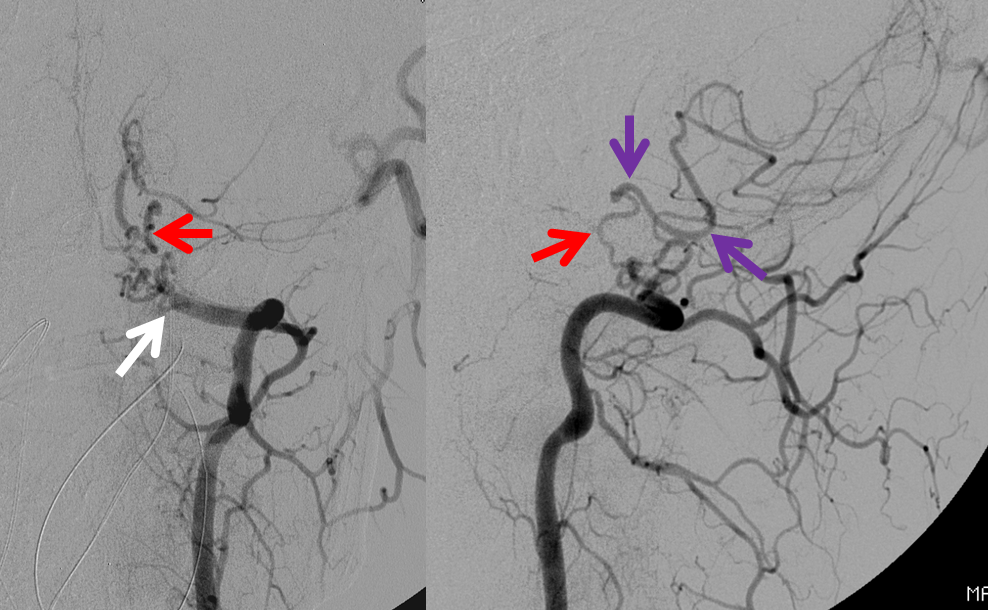 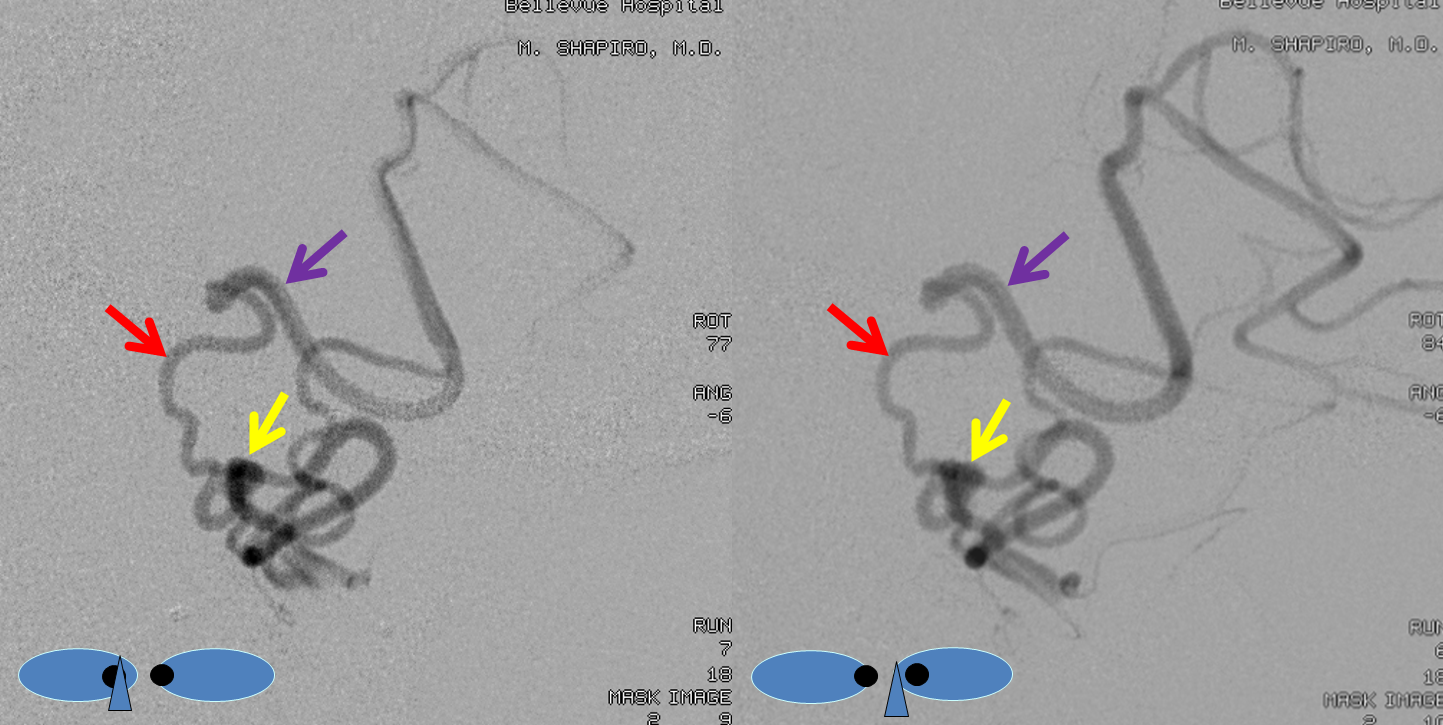 The same aneurysm in LAO, for clarity’s sake. 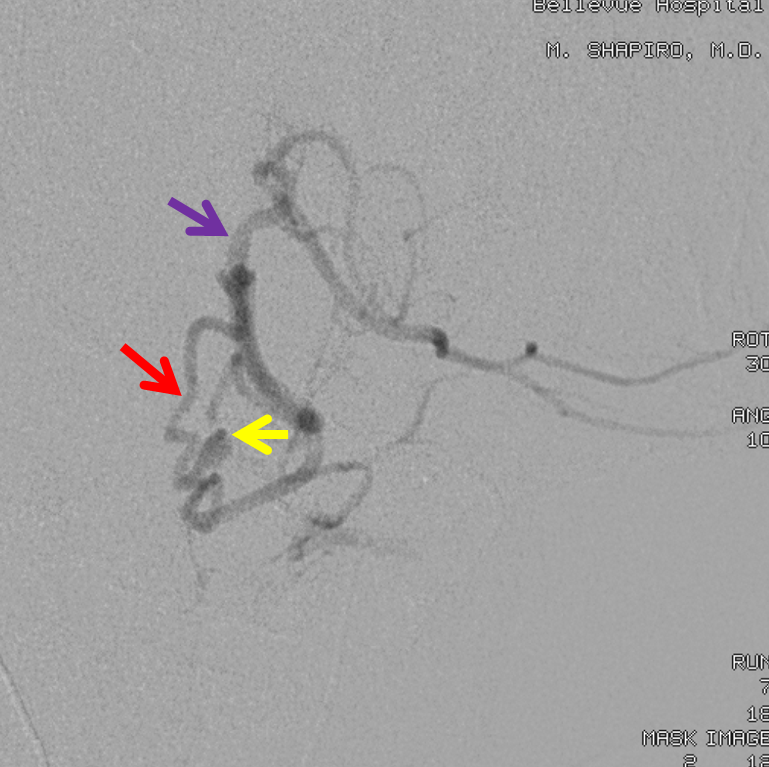 For several reasons, primary coiling was felt to be a bad idea.  First, the road is very tortuous.  Second, once the nature of the lateral spinal artery is recognized, once becomes congizant of its primal importance in supply of the lateral cervicomedullary junction, which rules out any glue options.  We decided to test occlude the vert and take it down just proximal to the stump.  The balloon (red) is inflated in the horizontal segment.  Right vert frontal view shows leptomeningeal reconstitution of the PICA territory (upper right image), while left vert injections show reconstitution of the vert distal to the balloon, the lateral spinal, and PICA (purple), via the odontoid arcade (lower images, red arrows). 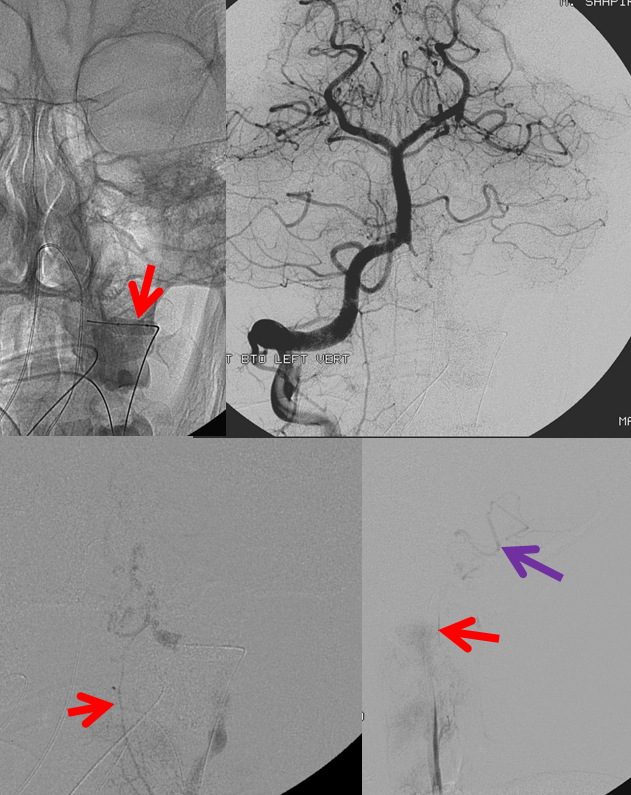 The vert and its C1 branch are taken down with many coils, as no better methods are now available for this kind of job in the United States.  Post-takedown there continues to be somewhat disturbingly effective reconstitution of the LSA, aneurysm, and PICA via the odontoid arcade (red) and meningeal branch of the ascending pharyngeal artery (blue), which is itself opacified via its muscular branch connection with the odontoid arcade. 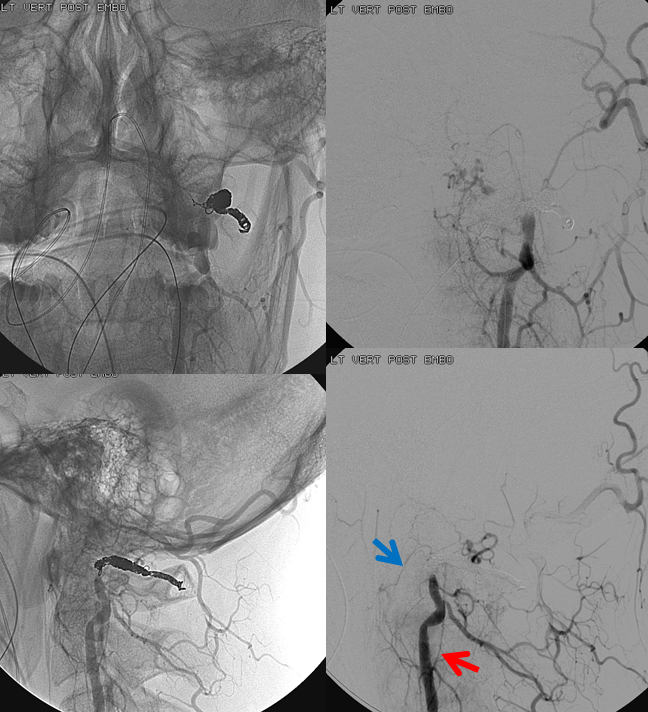 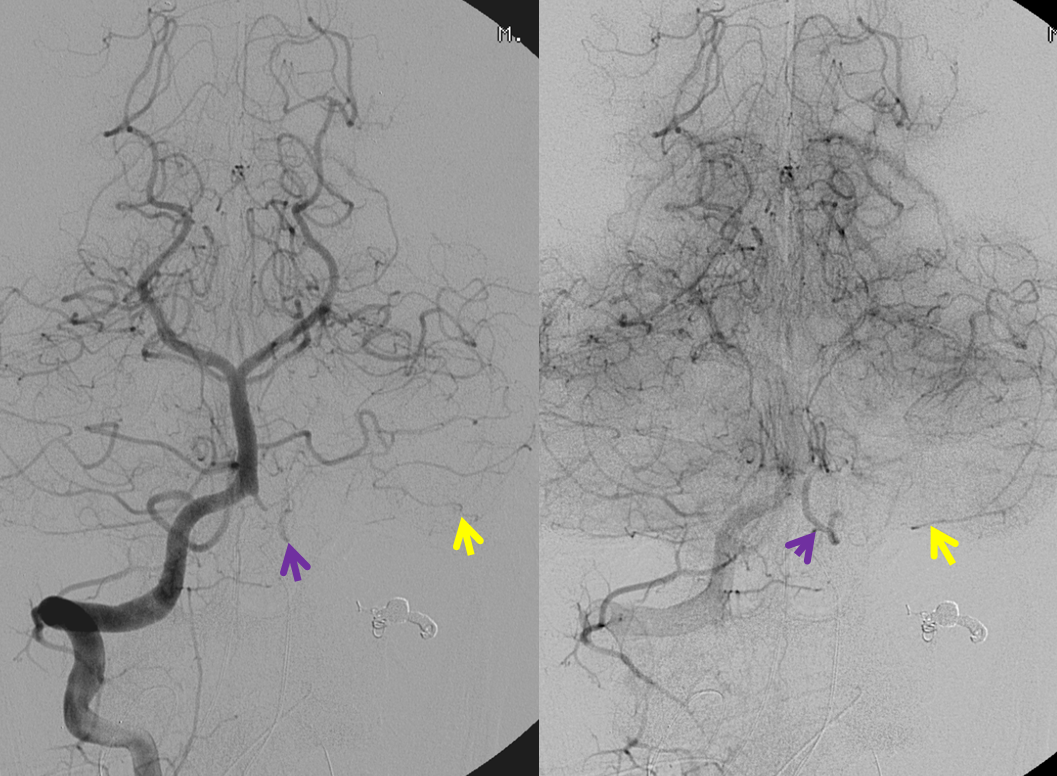 One week later, angiography shows disappearance of the ipsilateral odontoid arcade support.  The entire PICA territory is visualized through the right vert, including its proximal (blue) and hemispheric (purple) portions. 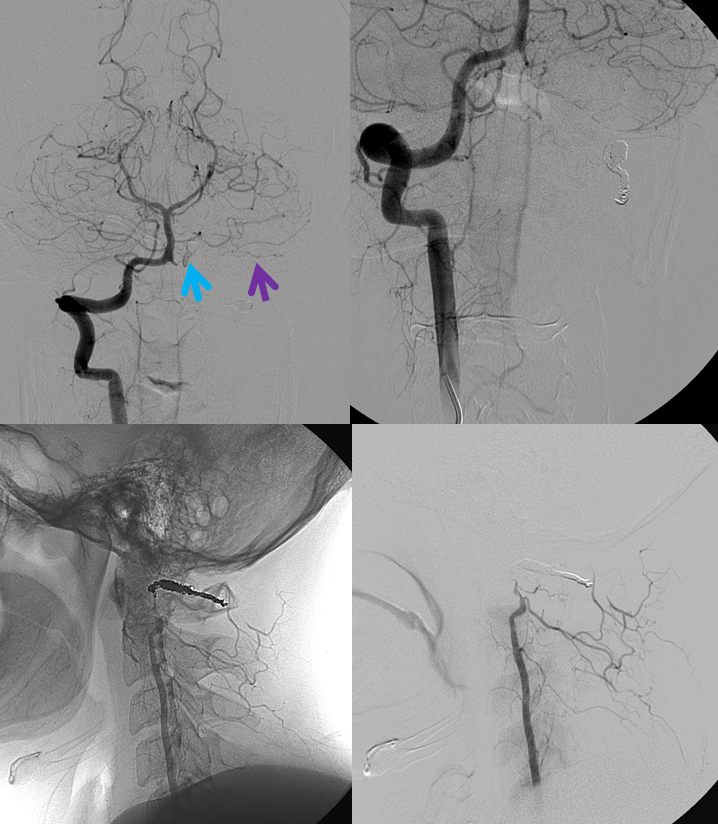