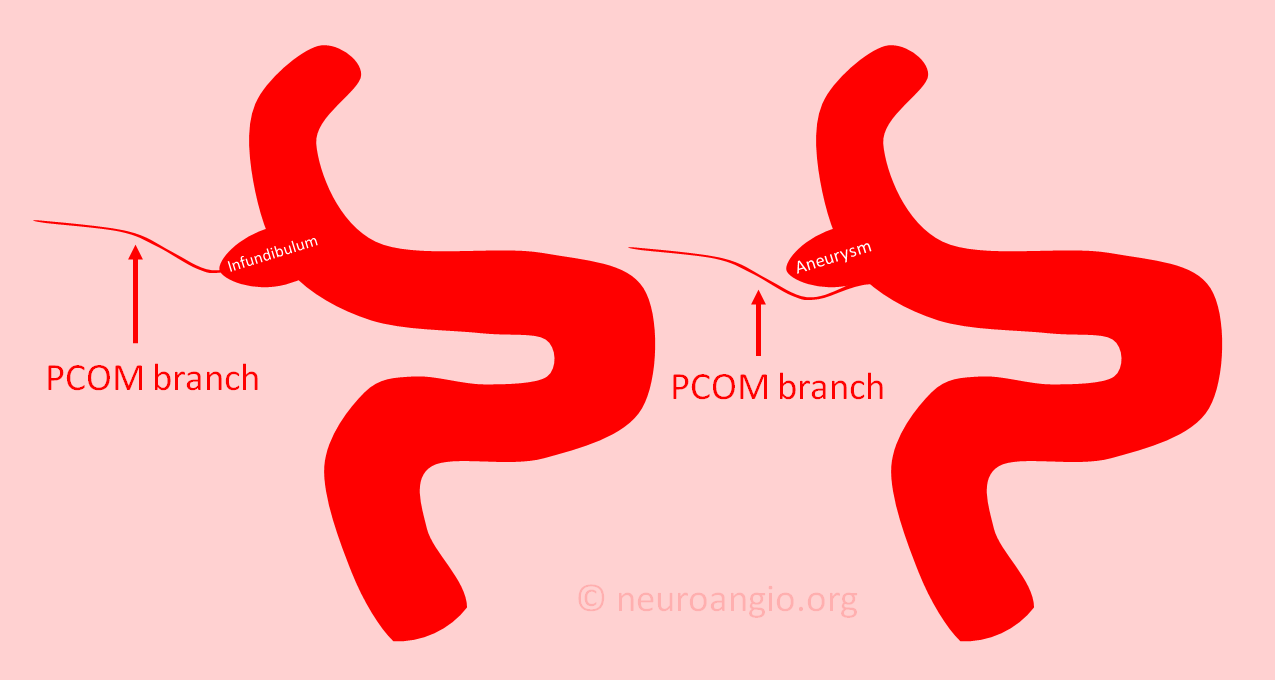 An infundibulum is not an aneurysm, though it may look like one. We see a lot of patients who are told they have an aneurysm, but really have an infundibulum, or are specifically referred to us so that we can figure out which of the two they have. Most of the time, we can do that with CT or MR. Occasionally, a catheter angiogram is required.

The picture above tells the story. An aneurysm is, most often, a kind of bubble located near or at origin of a vessel (image on right). An infundibulum, on the other hand, is a wide base, like a pedestal, of a vessel (image on left). In an aneurysm, the branch is located next to the aneurysm. In an infundibulum, the branch comes out of the top (apex) of the larger base. Of course, this is a simplification. There is a “gray zone” where sometimes its hard to tell. Also, having an infundibulum does not protect one from having an aneurysm there also, so sometimes we see both at once. That is not common however.

The most common vessel with an infundibulum is the posterior communicating artery (PCOM) — a branch of the internal carotid artery. The same area is also a common location for true aneurysms. Hence the occasional uncertainty which is which.

Why the uncertainty with modern medical imaging? 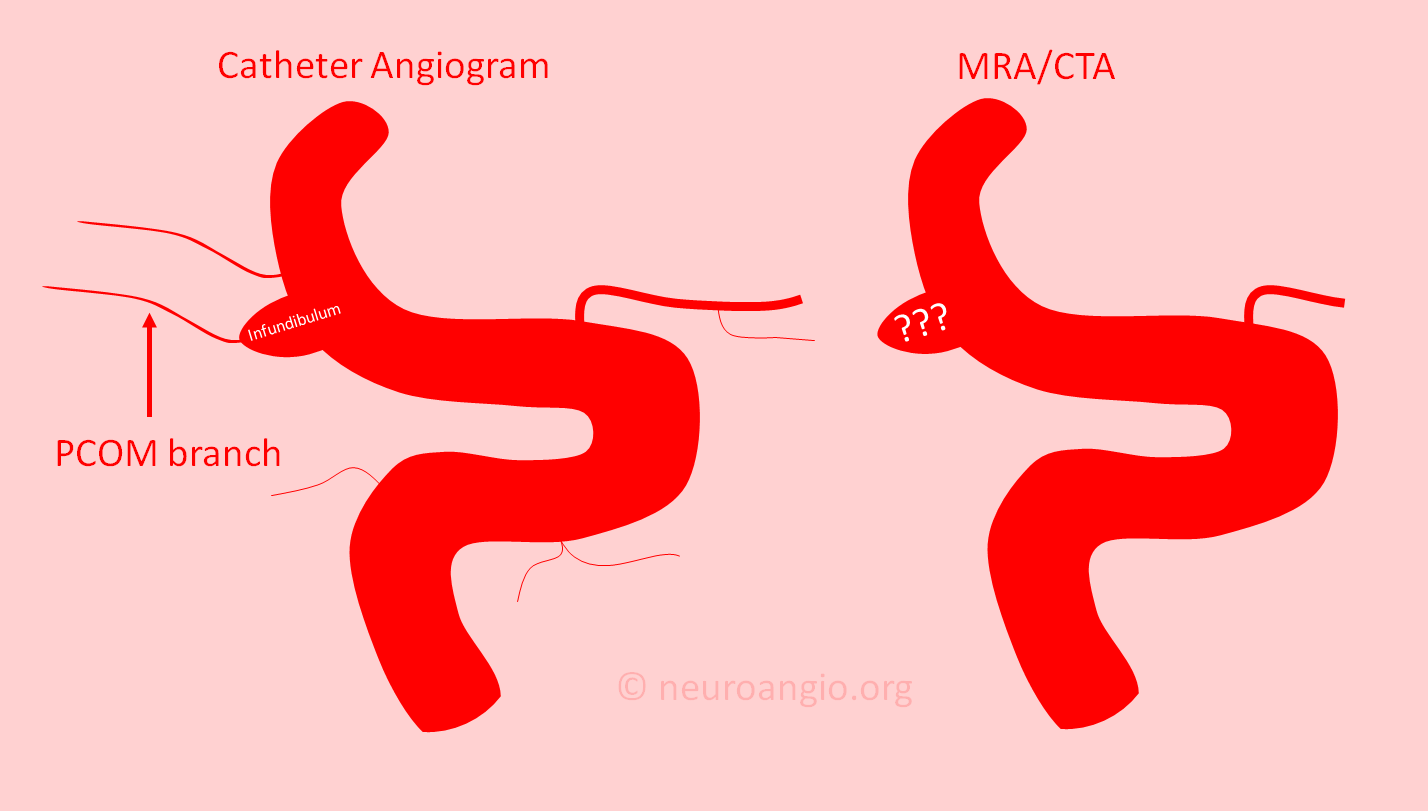 Usually, it has to do with limitations of MRA or CTA imaging capabilities.   MR angiogram (MRA) and CT angiogram (CTA) are the two most common ways of looking at cerebral vasculature noninvasively.  CTA uses x-rays and contrast material injected into a vein.  MRA relies on how water protons behave in strong magnetic fields.  Both are non-invasive, which is good.  However, like all imaging modalities, they have limited resolution. This means that they can not see blood vessels below a certain size. This size now is about 0.2-0.4 mm.  These seem like very small vessels — however in the brain vessels of this size can be extremely important.

In order to distinguish between aneurysm and infundibulum, the CTA or MRA needs to show the adjacent branch.  If the branch is too small to be seen, then deciding between aneurysm and infundibulum is not possible with certainty.  This is shown in the image below, where all kinds of small branches seen on the catheter angiogram (left image) are not visible on either CTA or MRA (right image) — and so we cant tell which is which.

Sometimes, this certainty is not required — if knowing for sure does not change what we recommend, then we may advise to repeat the MRA or CTA later on to see if things change.  If however it is important to know for sure if there is an aneurysm or infundibulum, a catheter angiogram may be done.  The catheter angiogram resolution is much higher than CTA or MRA — meaning it can see very small vessels — and it always (in our experience) is able to differentiate between aneurysm and infundibulum.  The disadvantage is that it is minimally invasive, and comes with potential for complications.  Unlike CTA or MRA, the catheter angioram is a procedure performed by a physician/surgeon.  As such, its safety and quality depend mainly and how the operator does it — it is “operator-dependent“.  For a patient, it is important to ask what the risks benefits and alternatives are in the specific place and from a specific operator.

Below is a typical example of uncertainty — is the CTA image (left) aneurysm or infundibulum?  The catheter angiogram image on right shows the small PCOM branch arising from the top of the infundibulum. 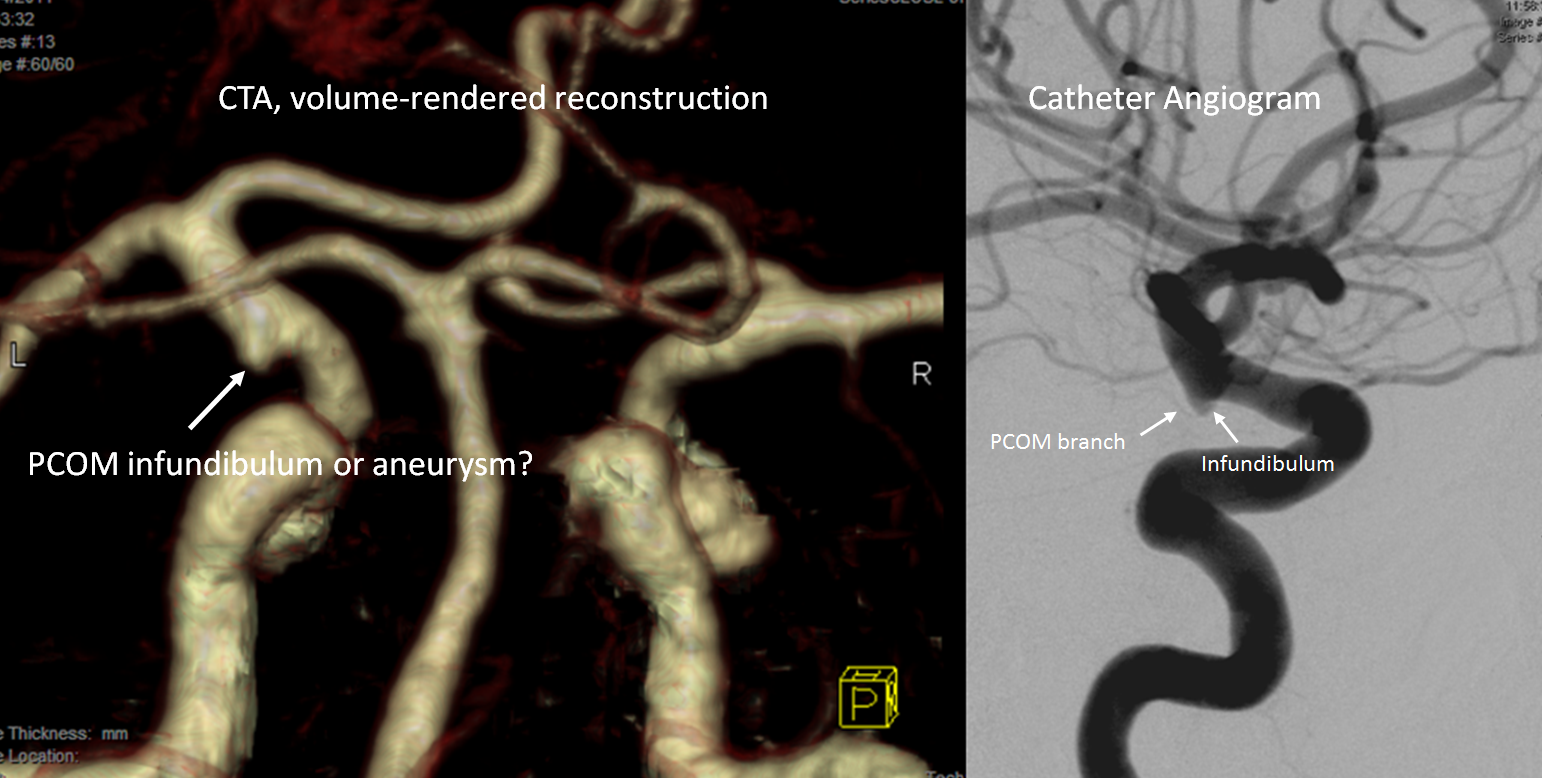 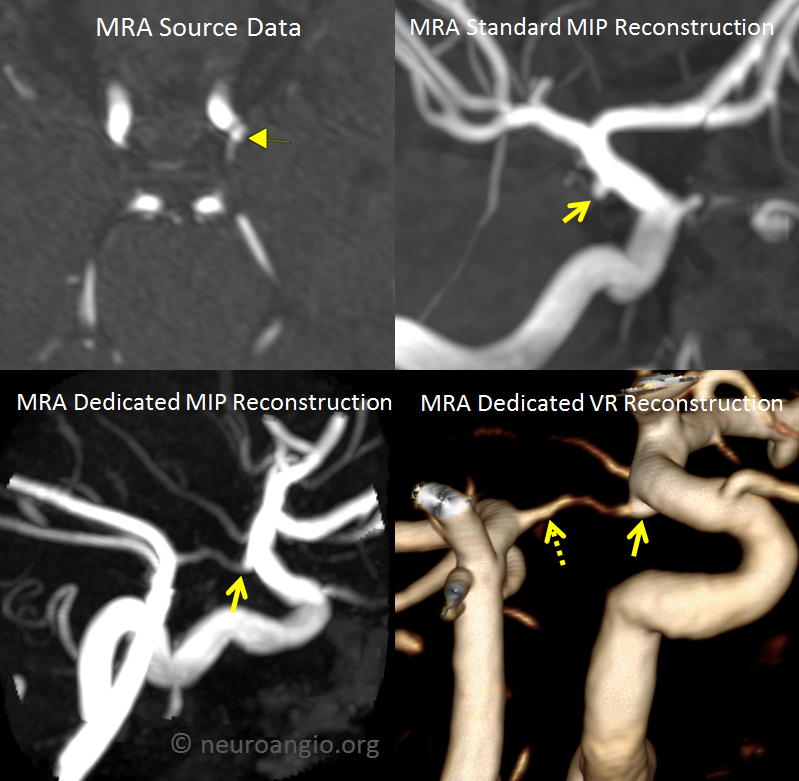 Below is a larger PCOM vessel with a smaller infundibulum — this is usually well-seen on CTA or MRA.  The image also shows that all kinds of vessels, besides PCOM, can have infundibula.  In this case, it is the origin of the “dorsal ophthalmic artery” that has an infundibulum also 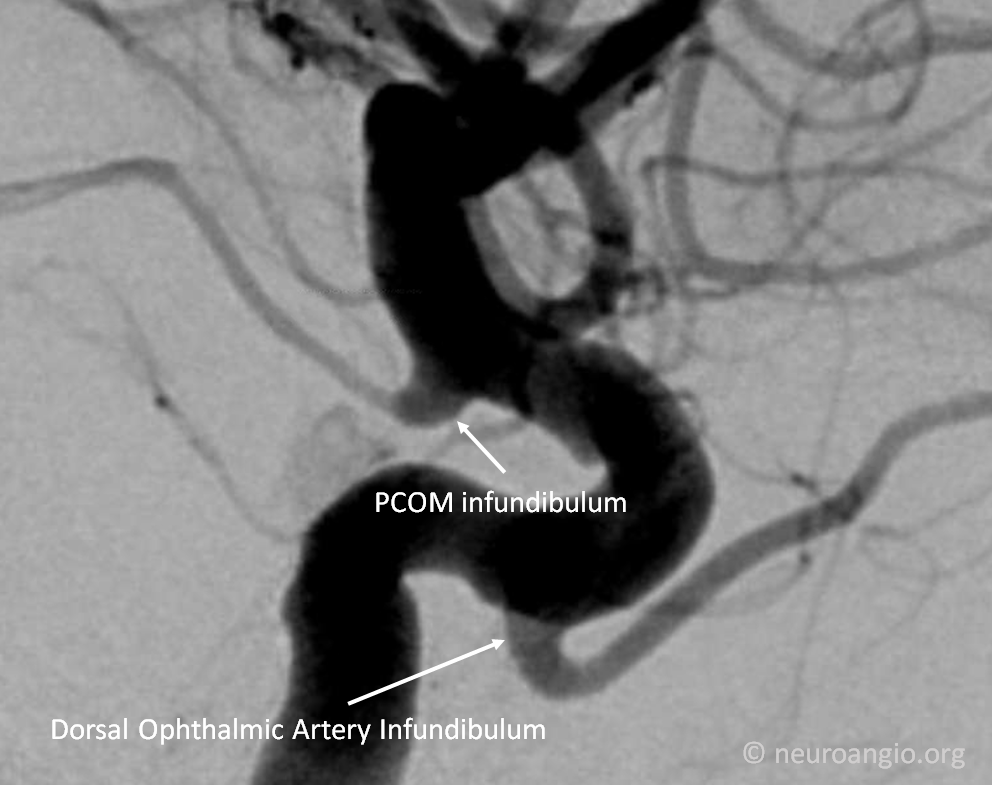 Good angiographic technique is important — in images below, the infundibulum looks like an aneurysm on the right image because of injection technique — the image on the left, with good technique, shows the PCOM branch arising from the apex of the infundibulum 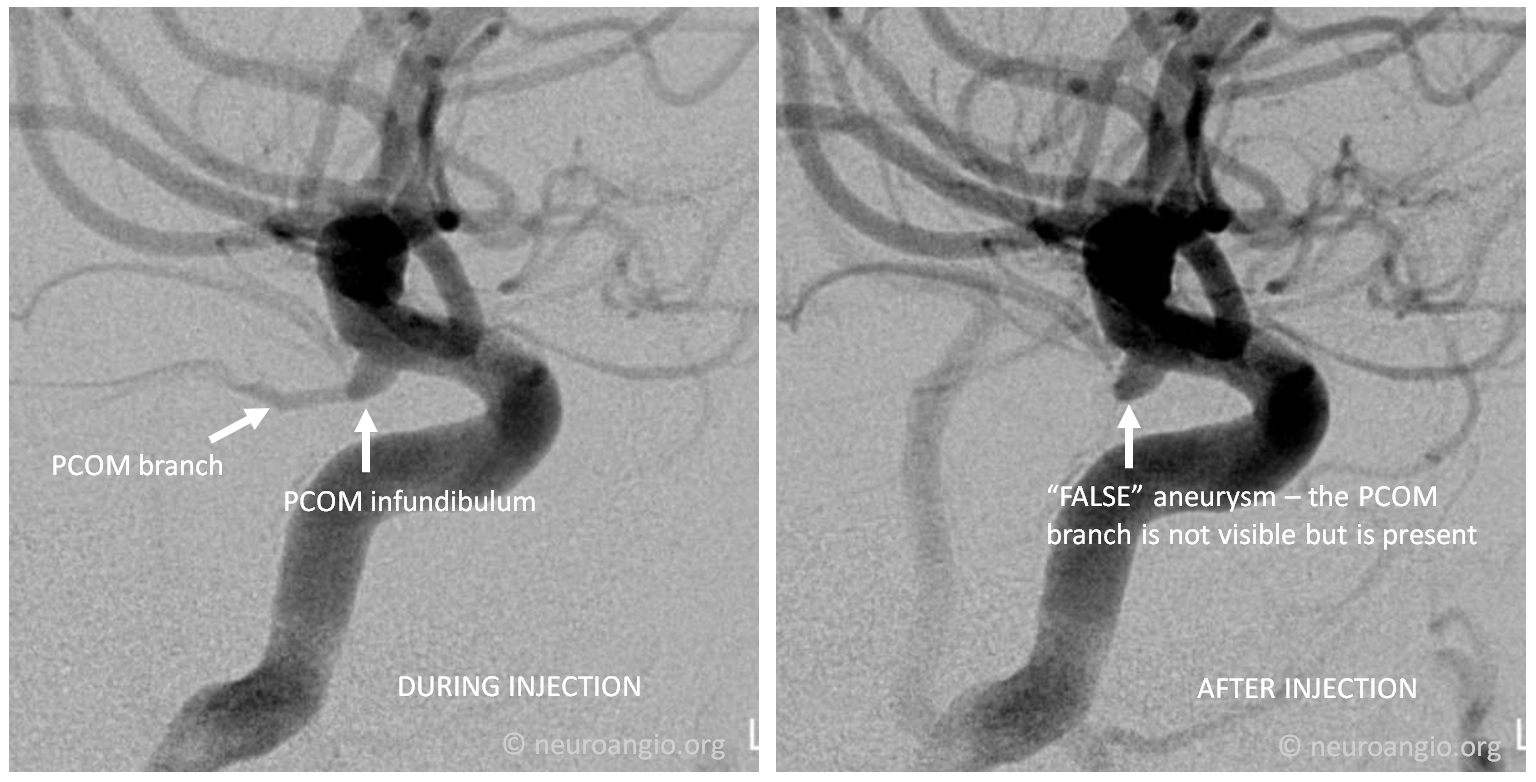 There are always gray zones in medicine.  Some believe that an infundibulum should be no larger than 3 mm.  In the image below, the measurement is 3.2 mm.  Does that mean this is no longer an infundibulum?  The answer is in art of medicine — how different physicians see things, patient related factors, etc.  In this case, my opinion is that this is still an infundibulum.  We may “monitor” it periodically with MRA, but it does not need treatment now. 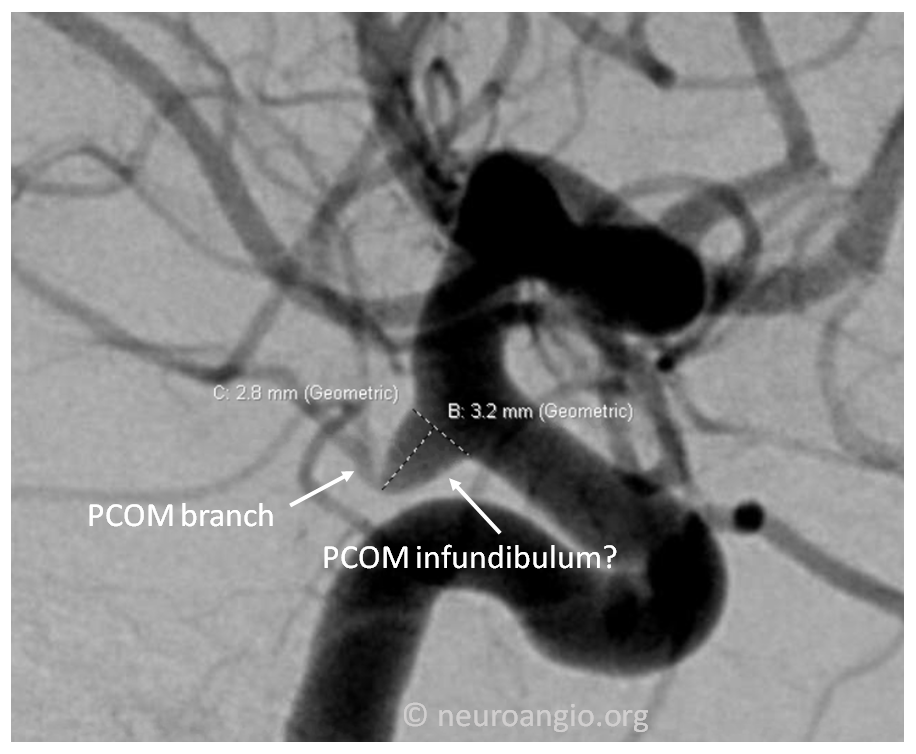 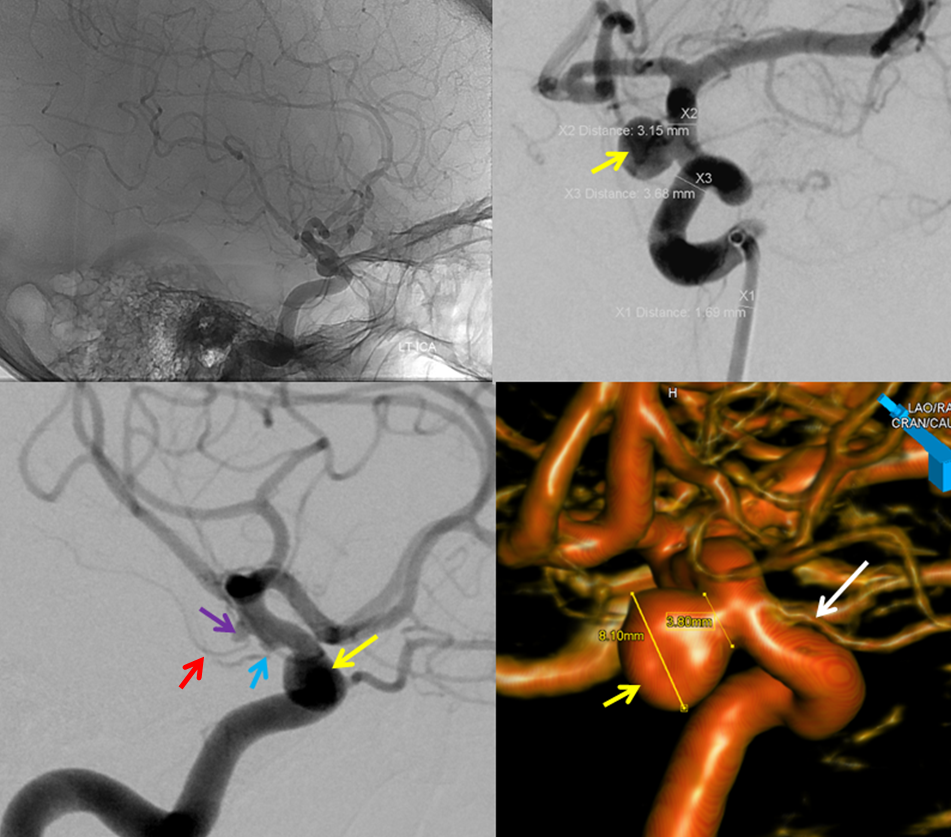 More examples of how medicine is art — the image below shows an ophthalmic artery aneurysm — not infundibulum, even though the ophthalmic artery origin is not on the side of what we decided is aneurysm, but the middle of it.  Why?  Because of how it is — in this location, this thing behaves like an aneurysm — meaning it has a risk of rupture, has irregular shape, etc.  The point is you still need a specialist to get a professional opinion… 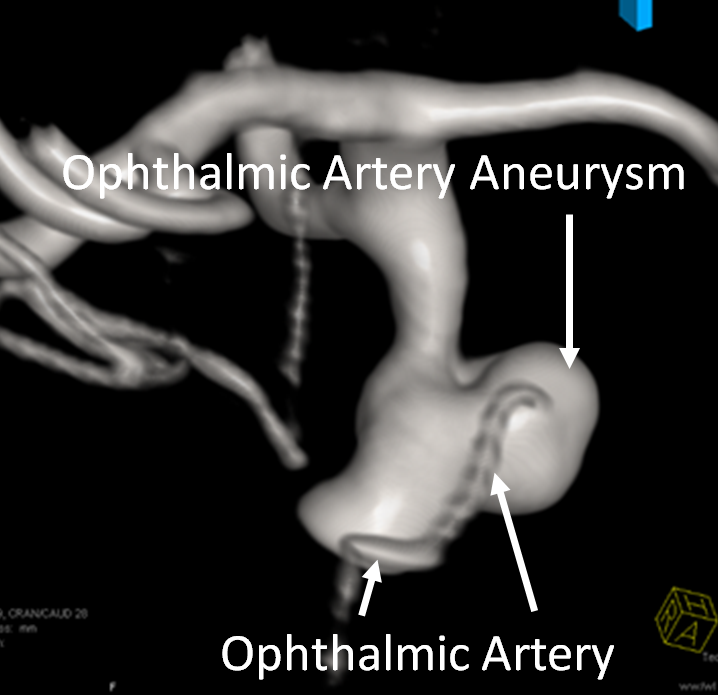 What are the advantages / disadvantages of CTA and MRA?

An angiogram is not always required.  MRA or CTA may, despite their deficiencies, be enough.  The advantages of MRA are that it does not require x-rays or contrast. The disadvantage used to be that it produced lesser quality images, and certain people with some metal implants could not have MRA.  Some people are claustrophobic, and cannot be inside “closed MR” machines without taking anti-anxiety medications, or not at all.  Unfortunately, open MR scanners are still of insufficient quality, in my opinion, to make good enough images when differentiating between infundibulum and aneurysm is necessary.  That being said, modern top quality MRA (3 Tesla, advanced “coils”, etc) is as good as CTA or sometimes better.

It is important for a patient, if they are to have an MRA, to ensure that the quality is worth it.  MRAs are just like cars — old, new, bad, good, etc.  Most patients don’t know that however and just assume they are getting an MRA.  Top quality MRAs require a 3 Tesla magnet (most older magnets are 1.5 Tesla, new ones are increasingly 3 Tesla).  However, even a 3 Tesla magnet can make bad pictures if scan time is not long enough or other parameters are compromised to make the scan faster, or if the subject moves too much inside the scanner.  Typically, a 7 minute 3T MRA produces excellent images.  It is important to stay still while the images are acquired — like any picture, the more you move, the blurrier it gets.

What do we advise?  As a rule, we prefer MRA — that’s because we have access to top quality machines.  MRA is especially better in children, childbearing age women, and others who should especially minimize exposure to radiation.  MRA is also better for people with renal insufficiency, as CT contrast can make kidney function worse, whereas MRA of the brain is usually done without contrast.

Sometimes, the opposite is true, and CTA is a better choice — depending on location of aneurysm vs infundibulum, and other factors.  For example, of a patient already had a suboptimal MRA, insurance may not pay for a repeat MRA, but will usually cover a CTA.  Pragmatic but true.