(under construction)  Subclavian Artery and Its Branch Vessels
Excepting the vertebral artery, which is deservedly accorded separate treatment, the section here addresses important branch vessels of the subclavian artery.  The ascending and deep cervical vessels are particularly important in their relationship to the vertebral artery. Considering these three vessels as a single anatomical network subserving both neural and non-neural tissues of the neck, and to some extent brain as well, bestows greater respect upon branches of the thryocervical and costocervical trunk, as classically described.  Extensive collateral connections exist between these three channels, branches of the external carotid artery, and upper thoracic segmental vessels such as the supreme intercostal artery.  As such, the subclavian artery can be as well discussed in the spinal vascular anatomy section, where it is mentioned chiefly in connection with anterior spinal artery supply.
Thyrocevical trunk — see Thyroid Arteries section.
Ascending Cervical and Deep Cervical Artery Cross-Sectional Imaging.  Select Axial Images of the neck, demonstrating the course of a common trunk of deep and anterior cervical arteries (in this patient).  For a full set of CT angiographic images, consult CT Angio Vascular Atlas section. 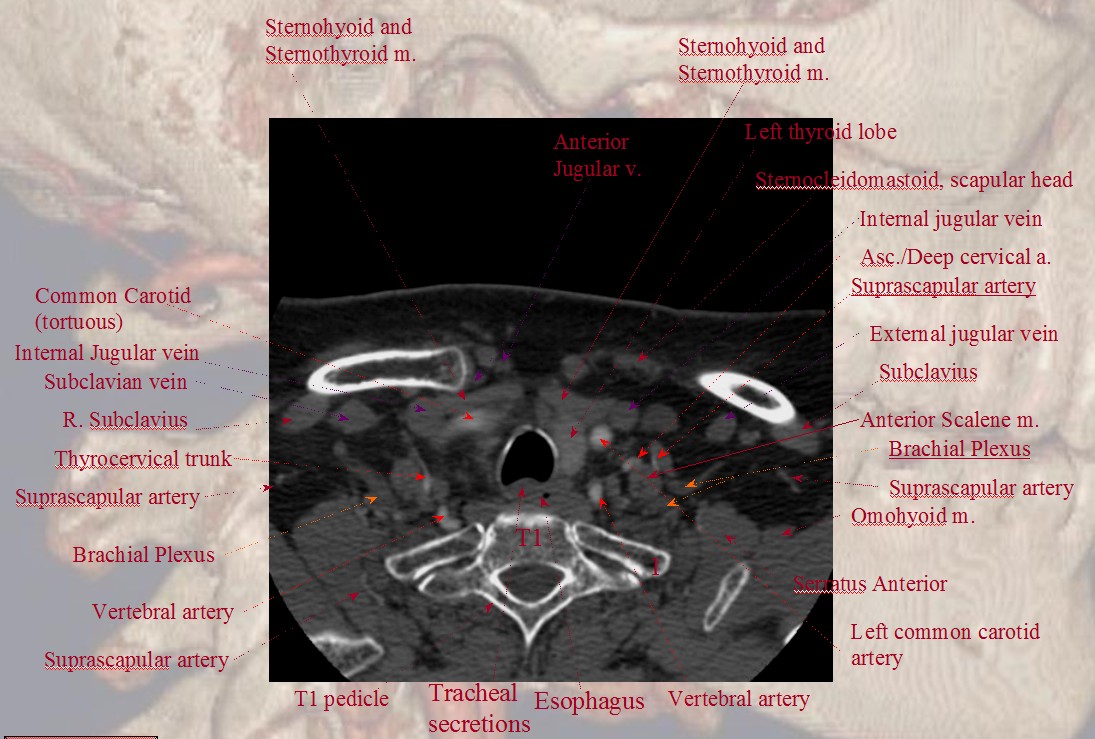 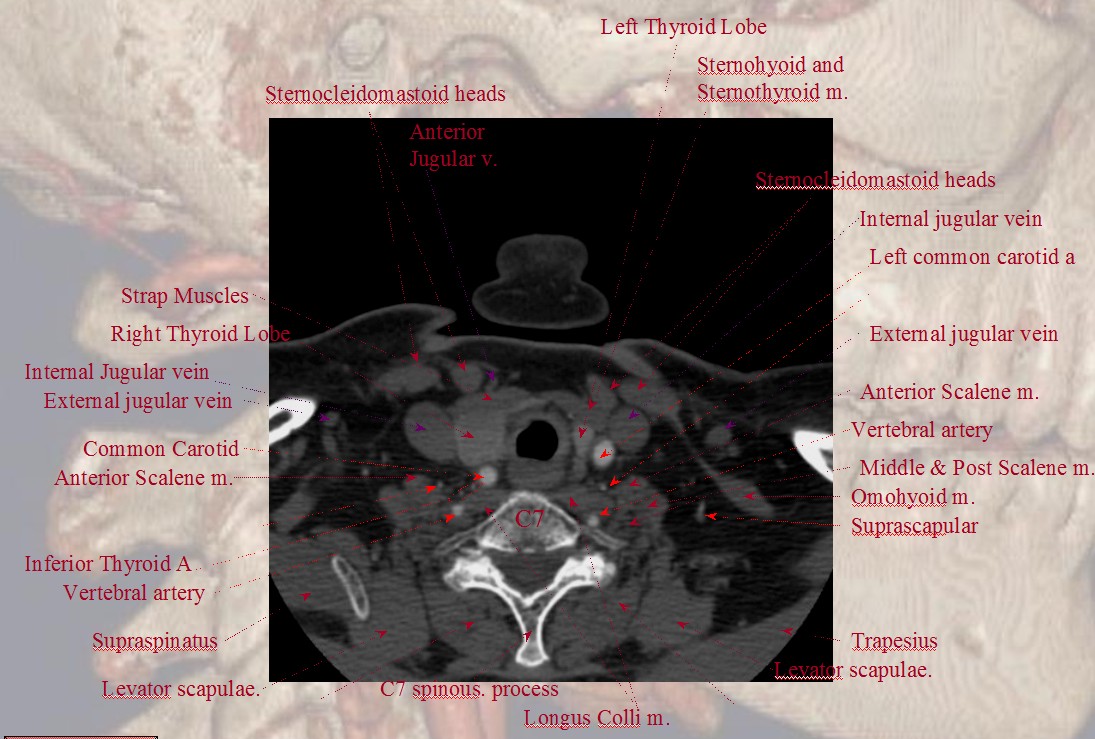 Notice common trunk of the anterior and deep cervical arteries in this case. 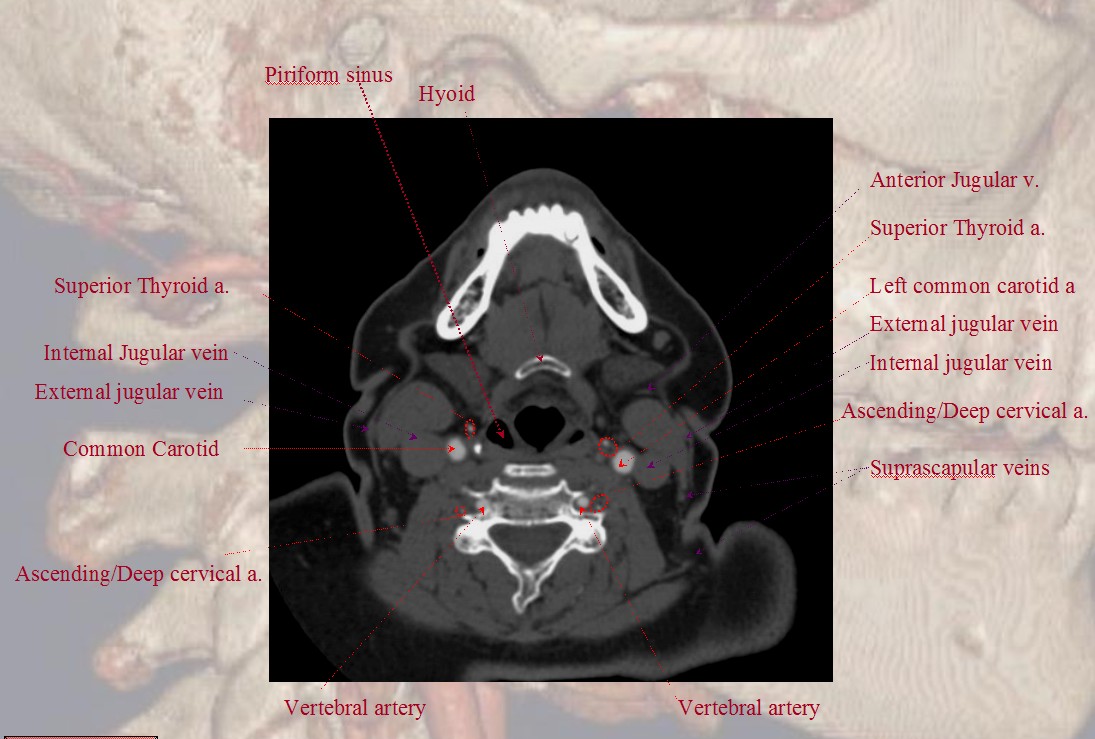 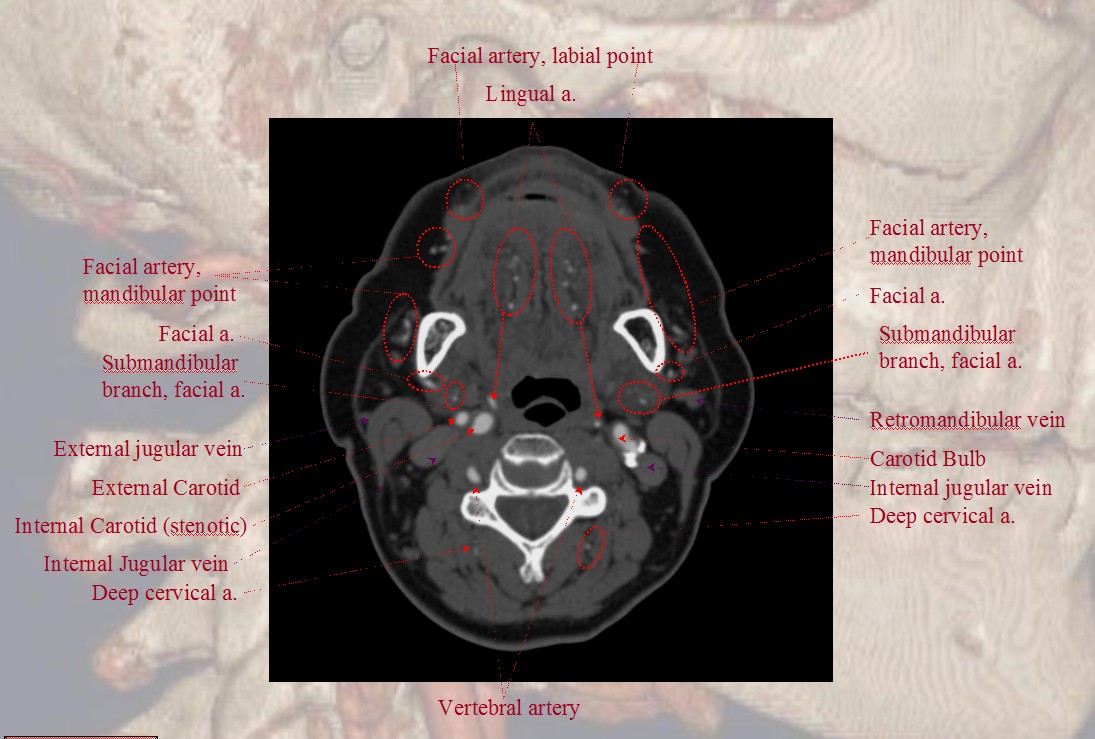 Deep cervical artery can be seen on the lateral projection as coursing posterior to the vertebral artery and lateral masses. 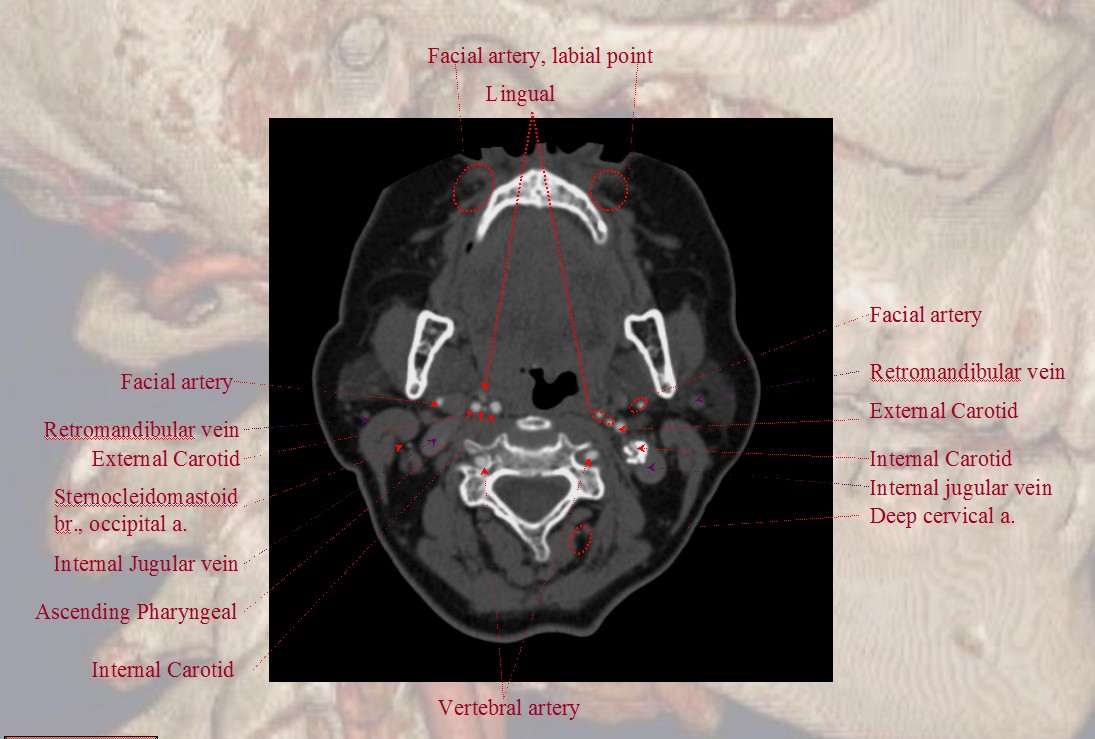 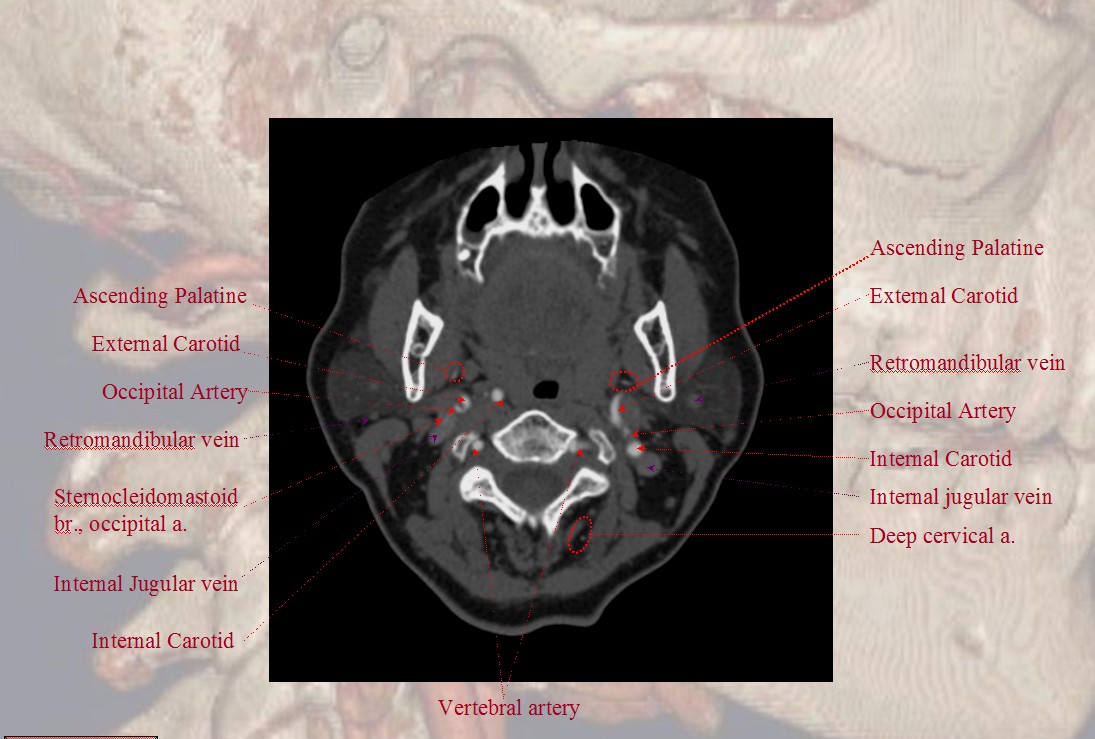 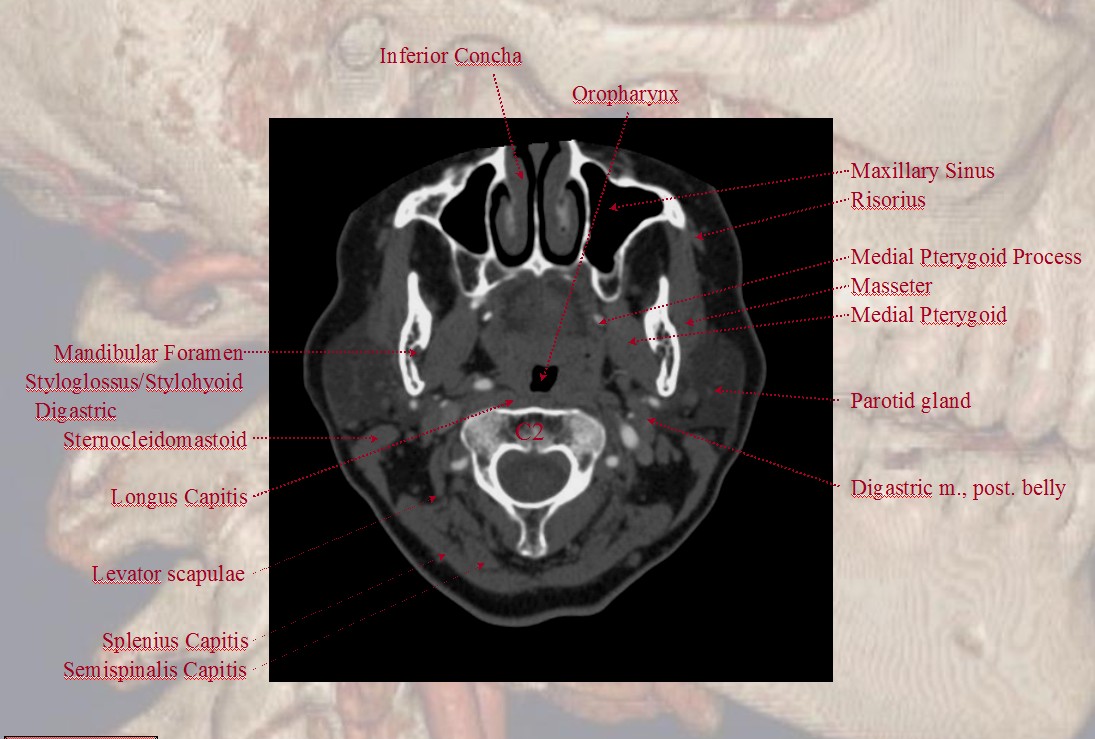 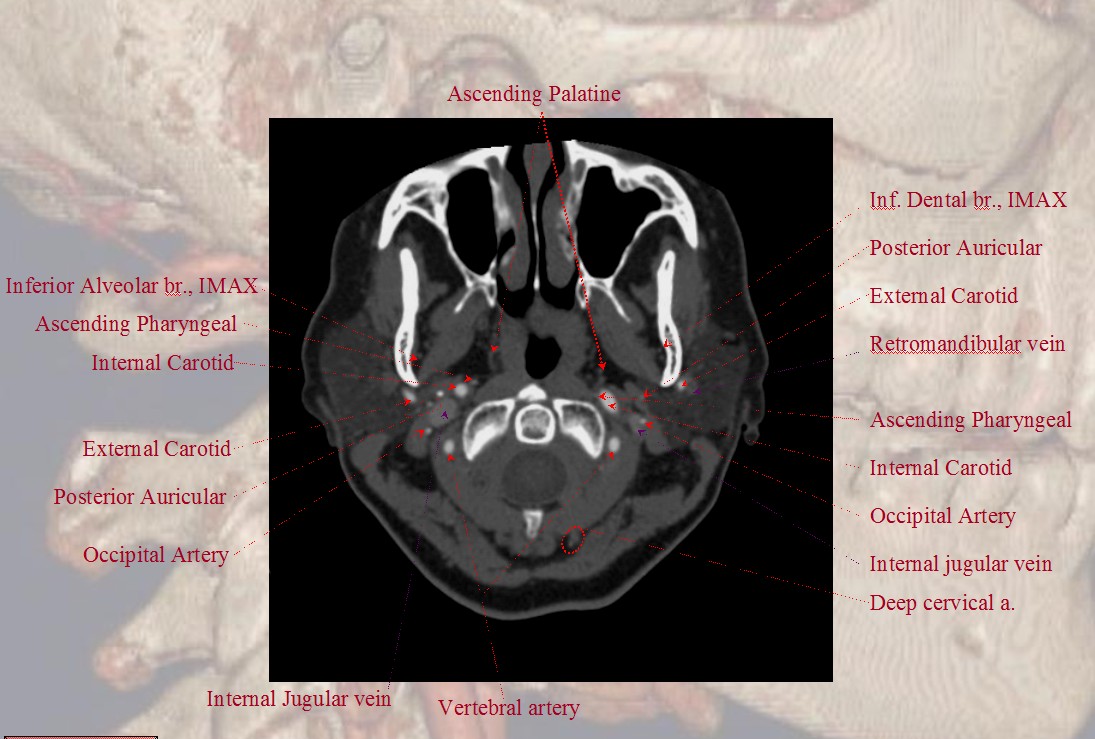 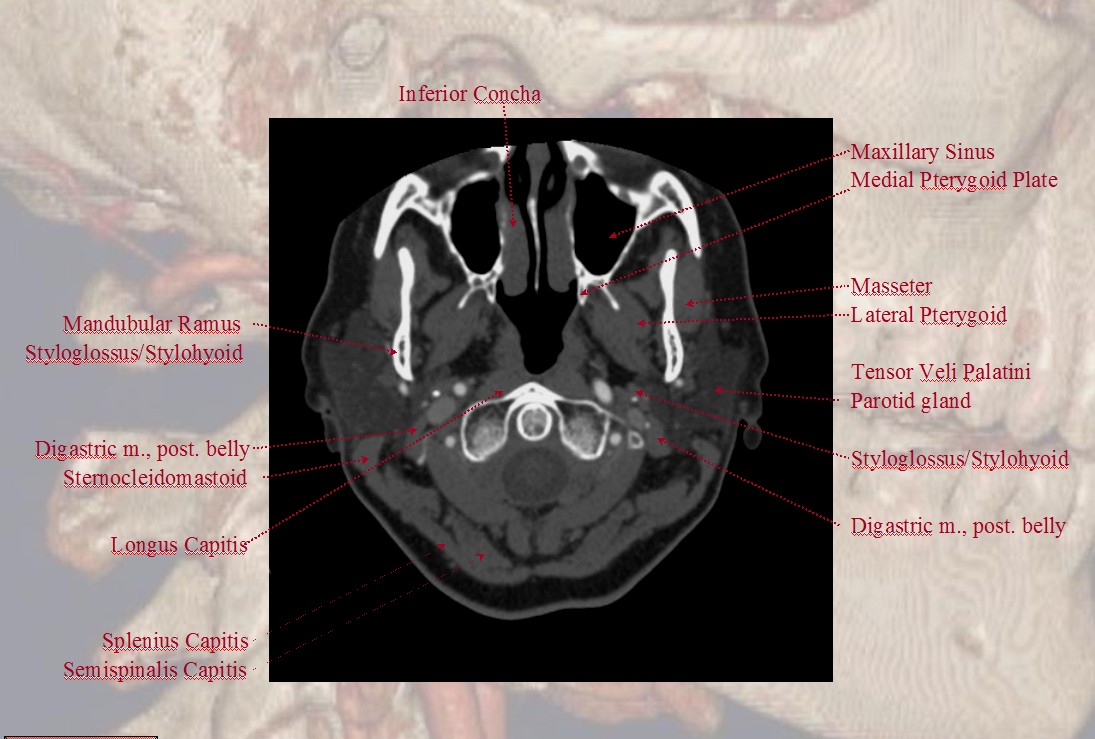 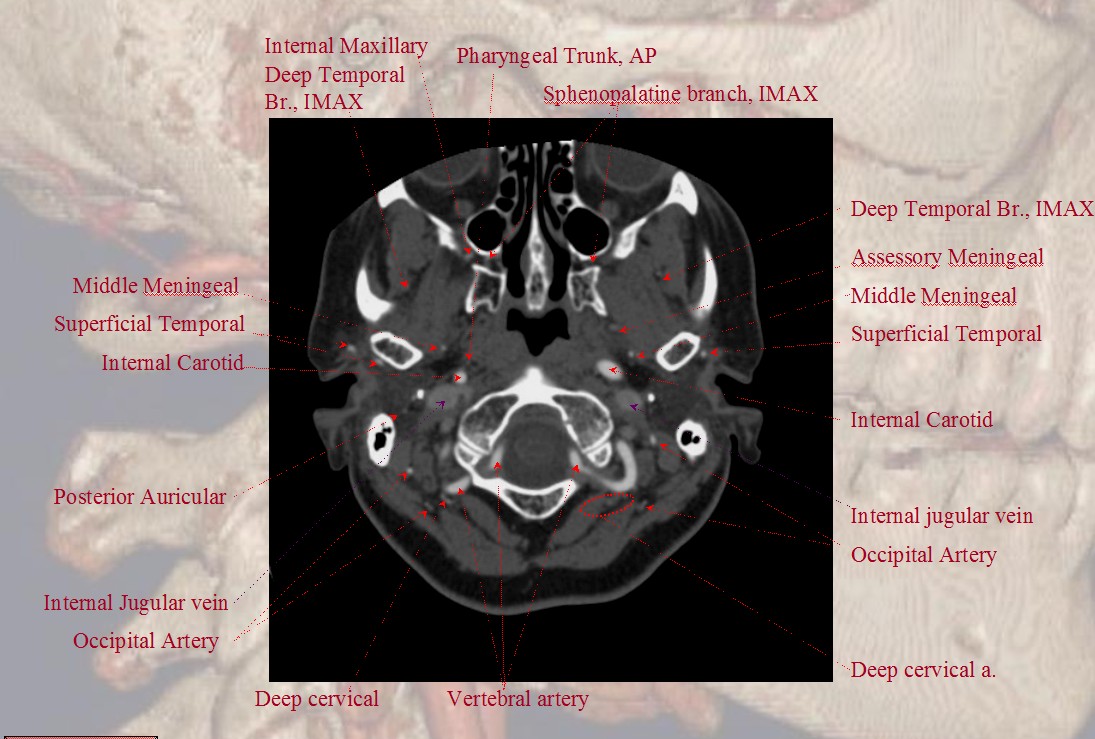 Notice proximity of the occipital, deep cervical, and vertebral arteries at the skull base, where anastomoses via the 1st segmental artery are common.
Deep Cervical Artery.
Radiculomedullary artery origin — any longitudinal system can give origin to the radiculomedullary artery — in this case the radiculomedullar artery (orange) originates from the deep cervical branch (red).  Notice also injection of supreme intercostal artery (pink, lower two images) with extensive deep servical artery anastomoses (yellow) through which the anterior spinal artery can be inadvertently embolized.  The catheter, barely engaged in the supreme intercostal, is labeled in blue. 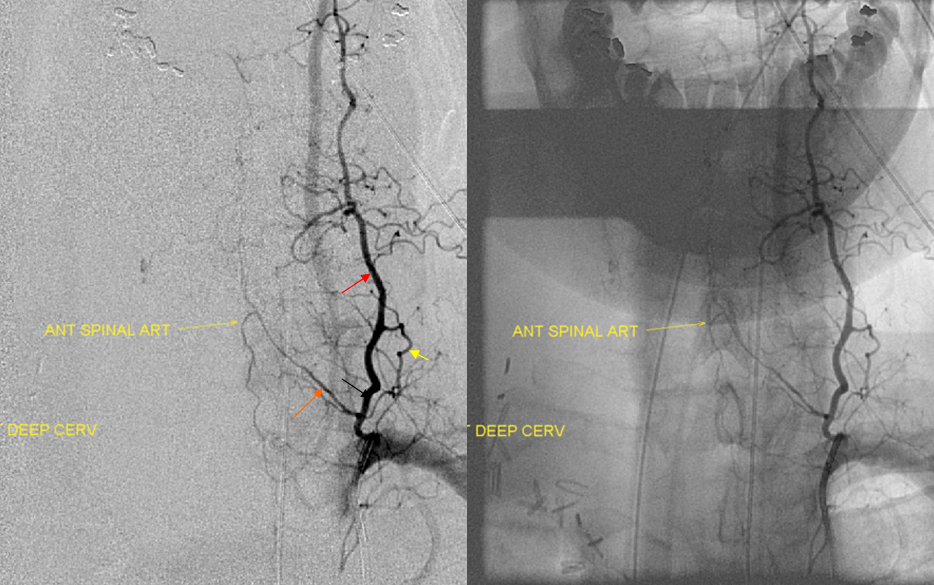 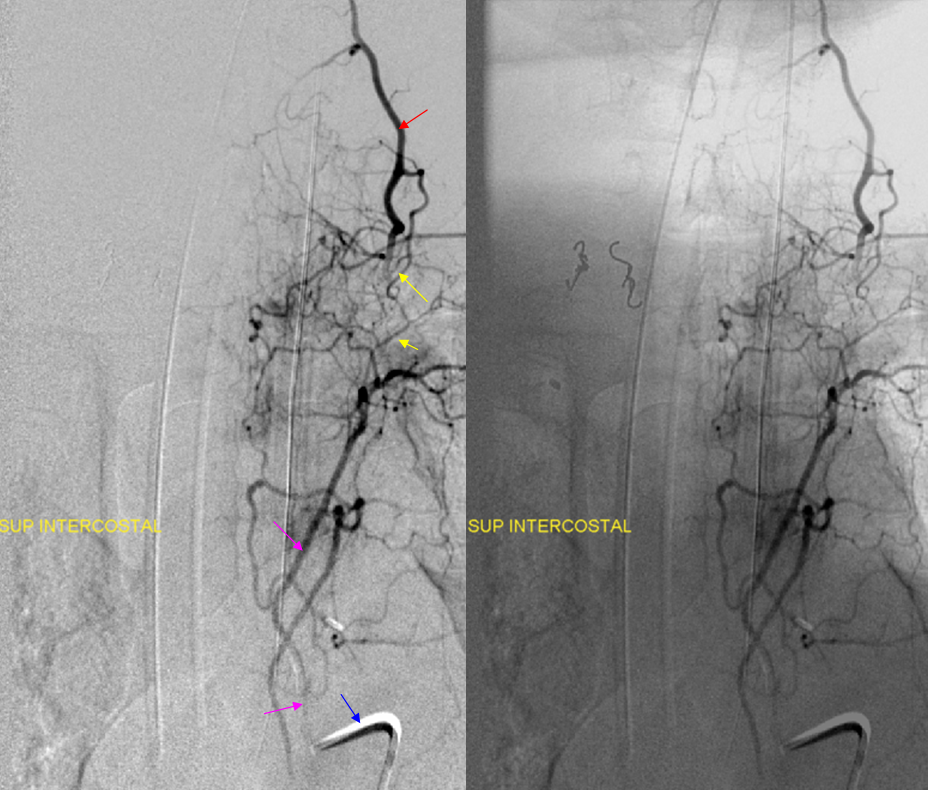 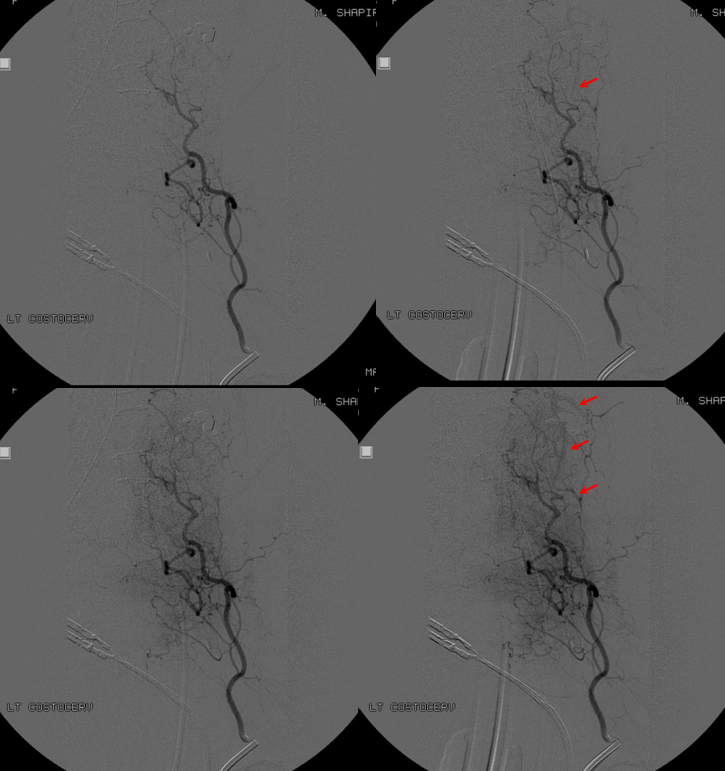 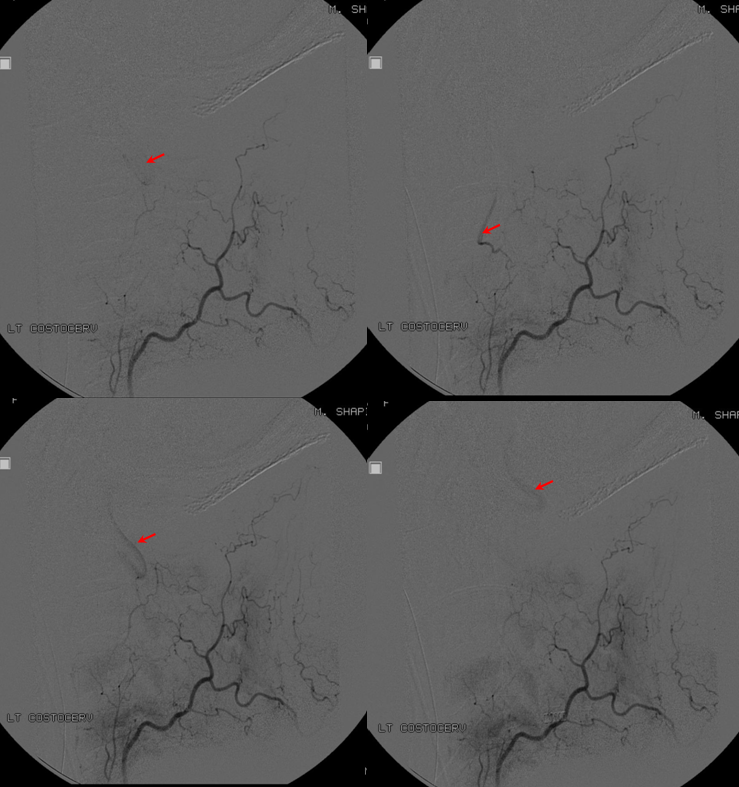 Ascending Cervical Artery
Classically, the artery is a branch of the thyrocervical trunk, which it shares with the inferior thyroid artery.  The ascending cervical participates in supply of the anterolateral neck, including the vertebral bodies.  The vertebral, deep, and ascending cervical arteries (as well as the ascending pharyngeal) can be conceptualized as part of a longitudinal system of homologous vessels, which connect transversely oriented segmental arteries corresponding to each metamere.  As such, the endovascular significance of the ascending pharyngeal is derived to large extent from its anastomoses with the vertebral system, typically at the lower cervical segments (C5-6-7).  For example, vertebral artery which enters the neural foramen at C5 is, in fact, not a vert, but ascending pharyngeal artery which, via the C5 segmental artery, reconstitutes the vertebral artery proper, in setting of more proximal vertebral hypoplasia. 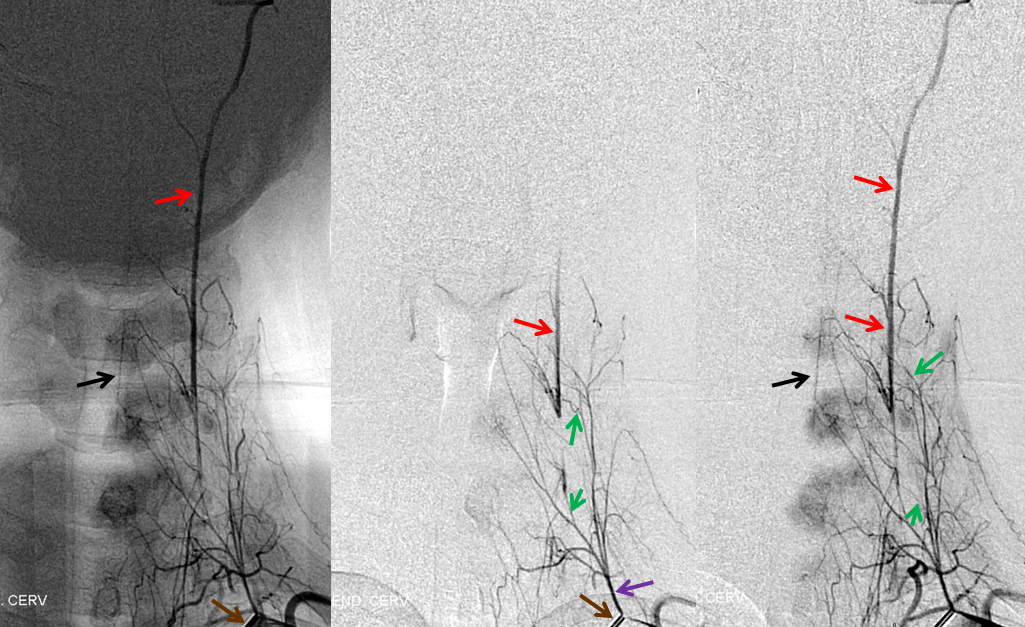 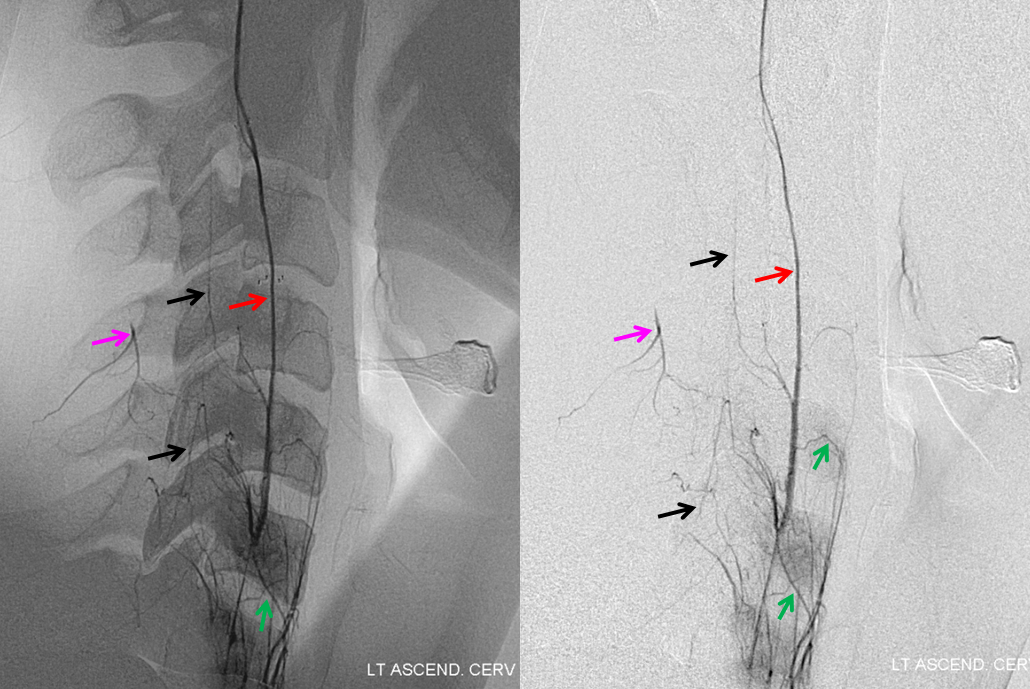 Occipitocarotid anastomoses and Common Carotid Occlusion
As illustrated above, the occipital artery serves as a segmental artery to the skull base — where its connection with the vertebral artery via segmental C1 and C2 channels is often evident.  In this role, serves as the most common channel of cervical carotid reconstituion in setting of common carotid occlusion.  Far less prevalent than ICA occlusion, gradual (atheromatous, usually) CCA occlusion is usually very well tolerated.  In such instances, collateral circulation often comes from the external carotid artery to reconstitute the carotid bifurcation and subsequently the ICA.  The occipital is most commonly recruited to re-establish external carotid artery flow because of its extensive segmental connections to the three longitudinal cervical systems — the deep cervical, vertebral, and anterior cervical arteries. Typical routes include vertebral to occipital, deep cervical to occipital, or anterior cervical to occipital routes. In the example below, the left common carotid artery and proximal left vertebral artery are occluded.  Injection of the left subclavian artery demonstrates a large deep cervical artery (purple) which, through C2, C3, and C4 segmental collaterals (brown) reconstitutes the distal cervical vertebral artery (yellow) thus supporting the PICA component of the posterior circulation (not shown).  Additionally, the deep cervical, through a large connection to the occiptal artery (orange), reconstitutes the carotid bifurcation (light blue) and subsequently the markedly irregular internal carotid artery (red), maintaining antegrade ophthalmic artery flow and even opacifying briefly the left M1 segment (rightmost angiogram, above the top red arrow). 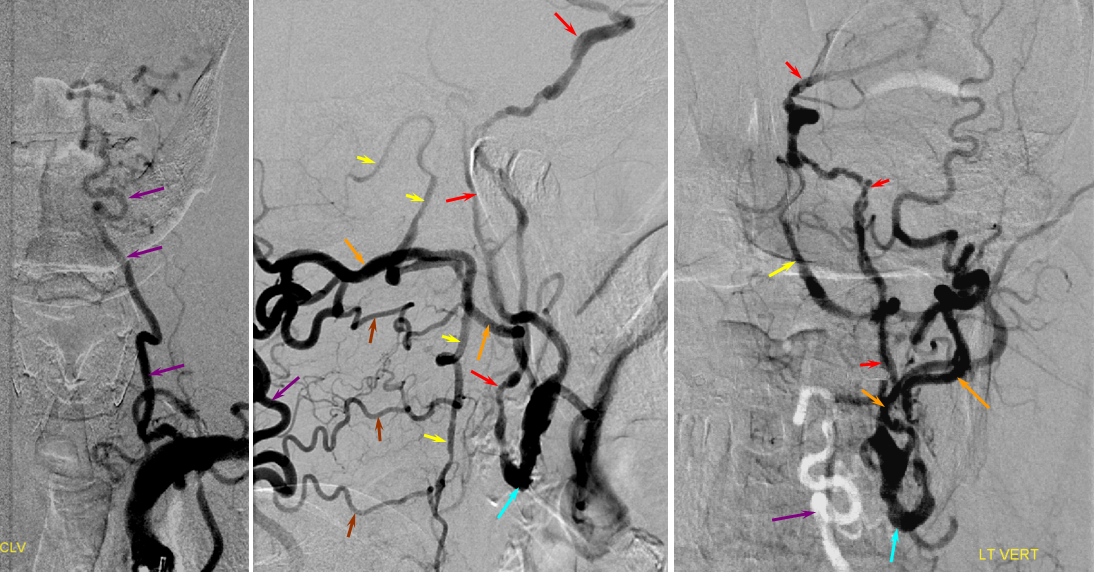