Carotid web is a thin, shelf-like protrusion of connective tissue most typically located on the dorsal wall of the carotid bulb.  It is however not atheromatous in nature.  Histologic evidence, which is not abundant but consistent, points towards focal connective tissue hyperproliferation.  It is felt to be a variant of Fibromuscular Dysplasia.  The shelf-like protrusion, especially when prominent, can produce flow alteration and particularly flow stasis between the lesion and dorsal carotid wall.  As such, it is one cause of artery-to-artery embolic stroke due to slow flow behind the web and thrombus formation with subsequent embolization.  We have not yet seen a proven carotid web large enough to cause significant stenosis.

Literature consists mostly of individual cases and small series  Treatments vary.  Asymptomatic, incidentally discovered webs are often managed with low dose aspirin or another antiplatelet.  Those presenting with emboli have been treated by medical management, using antiplatelets or anticoagulation, endarterectomy, and stenting.  The number of cases is small and there is no standard of care.  The mechanism of thrombus formation favors antcoagulation rather than antiplatelt treatment. However this is not how most atheromatous carotid lesions are managed and the web remains under-recognized.  Furthermore, many patients are relatively young and life-long anticoagulation is not a popular choice in many cases.  Most groups familiar with the disease prefer carotid stenting to endarterectomy though, again, there is a paucity of data as to whether this or endarterectomy is best.  Personally i think they both work just fine when appropriate technical expertise exists.

Below are some examples of webs

First evaluated by Carotid Duplex.  Because it relies heavily on flow, the web can be difficult to differentiate from cholesterol plaque on duplex. A flow change is seen (white arrow)

Then came CT Angiography (CTA), where the web is beautifully seen. It is an excellent way to look at the Web, but requires administration of contrast and has some radiation cost

Noncontrast Time of Flight (TOF) MRA was done next; Time of Flight technique relies on flow-related enhancement. Because flow in the back of the web is slow, it is not well seen on MRA. So, it is not very helpful differentiating web from atheromatous disease here

Contrast-enhanced neck MRA, still all in the same patient. Not as good as CTA, but definitely good enough.  It is our preferred method for following webs, as no radiation is involved.  The left side is normal

Finally, because of another question (possible aneurysm) the patient underwent a catheter angiogram. It shows the web best, of course.  However, it is invasive and we do not usually perform angiograms for the diagnosis of webs — a CTA or contrast MRA is sufficient. 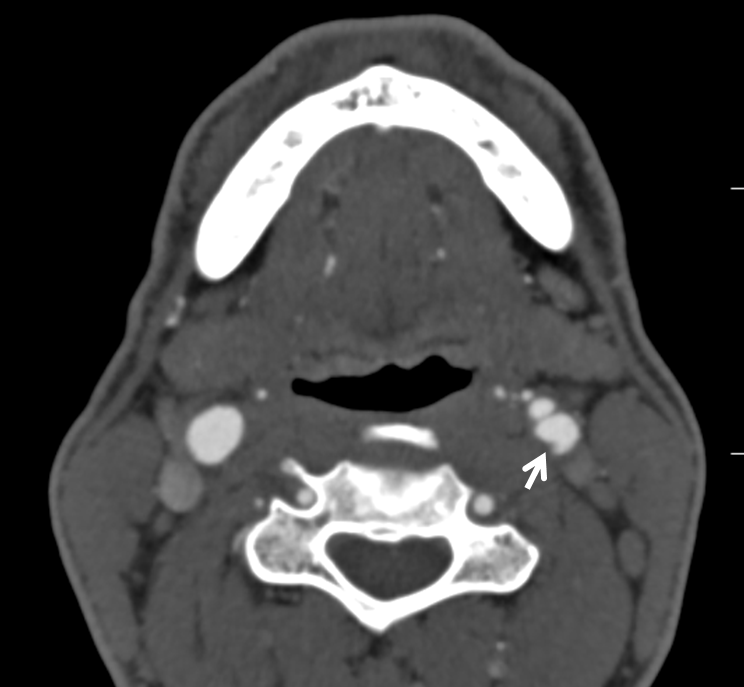 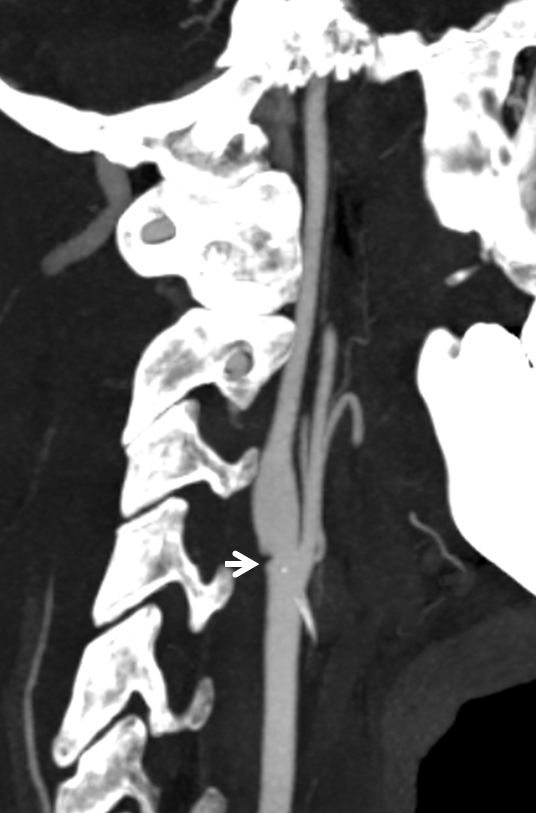 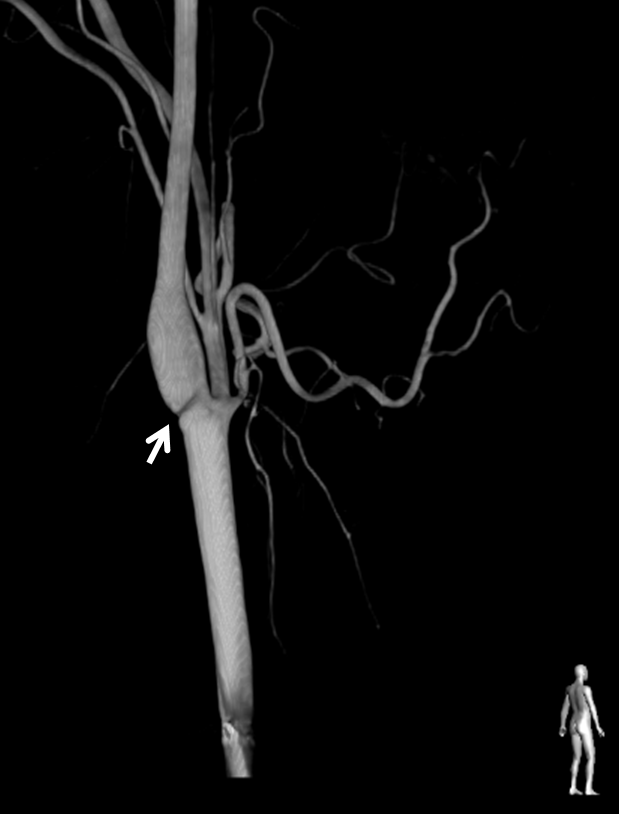 In this case, treatment was stenting (the more common modality among those familiar with the lesion).  You can see how the web is flattened by the stent, and therefore no longer a source for turbulence and thrombus formation. 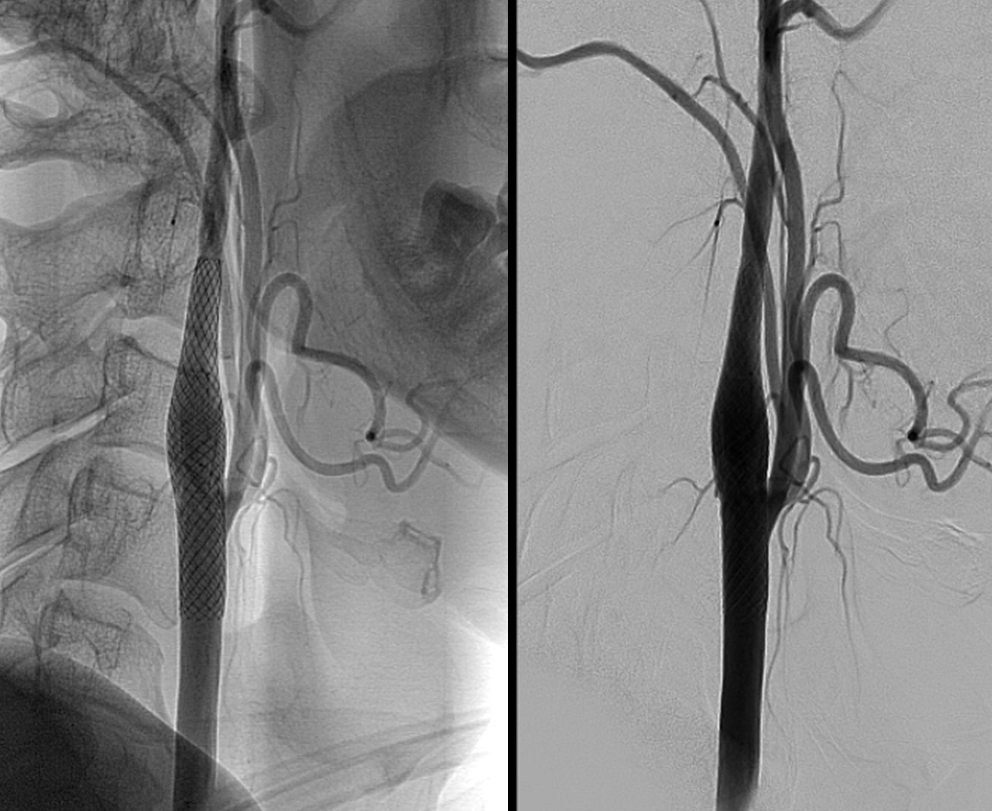 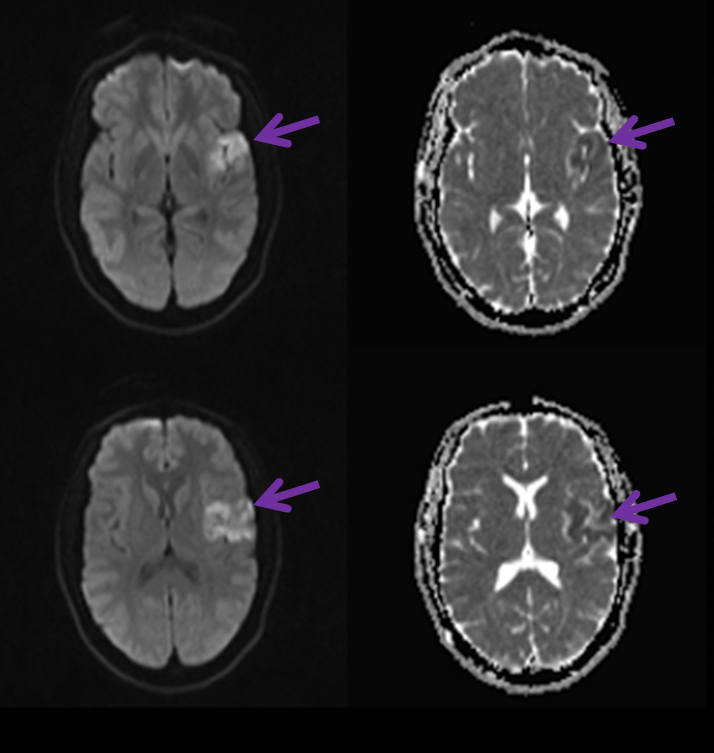 Typical images of the culprit carotid web on an MR angiogram

Another case from an older page where it used to be case 2. As you can see, they all look pretty much the same

Conclusion: Don’t forget about the web especially not in young patients with recurrent stroke events in same territory and with “no underlying cause found”.  Not all carotid bifurcation disease is atheromatous.  A young person with the above picture spectrum is not a cholesterol plaque case.  Its a web.

Don’t believe it?  Check out some traditional literature.  Here is one of the first reported cases in AJNR

Angiogram from this manuscript, same as any other web 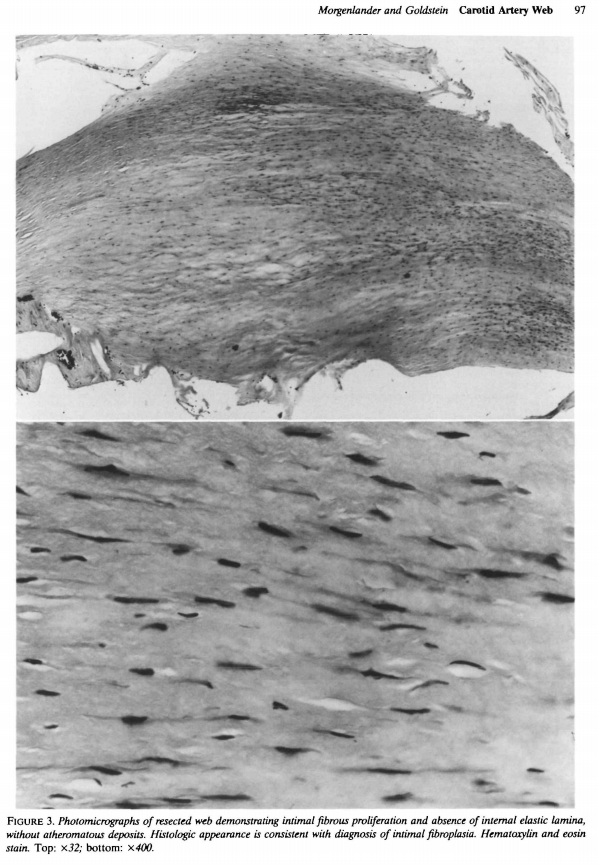 Still don’t believe in web?  MR CLEAN authors do, as well as whoever on “Radiology” reviewer roster reviewed their manuscript.  Now, “Radiology” is a very serious journal, and we do owe the MR CLEAN group BIG TIME, even if they haven’t figured out how to do stroke under general anesthesia 🙂  Check out their publication here

Here is an early web report, in a surgical publication from 1968, Fibromuscular hyperplasia of the carotid artery causing positional cerebral ischemia.  A very rare web large enough to manifest as a hemodynamic issue