The presence of “deep venous drainage” in an AVM influences the classic Spetzler-Martin grading system, increasing risk of surgical resection.  Many AVMs are wedge / pyramid-shaped, with base on cortical surface, extending into the deep white matter to variable degree.  It is interesting to note that degree of deep venous drainage does not seem to correlate well with depth of AVM extension — the nidus may extend almost to the subependymal surface and have barely any deep drainage, or not extent too much in and have some.  Does that reflect variability in each individual’s baseline venous drainage preference, accentuated by the shunt of the AVM?  There is usually one draining vein for the nidus — presumably the enlarged medullary vein — when it comes to surface there may be one or several surface ones, but the intranidal main collector is a medullary vein.

In this AVM there is significant deep drainage, with a fairly rapidly expanding varix causing worsening edema and weakness in just over 1 months time.  The plan is for Gamma Knife (headframe is on right image), followed by embolization to reduce the degree of shunting into the varix by targeting the deep component 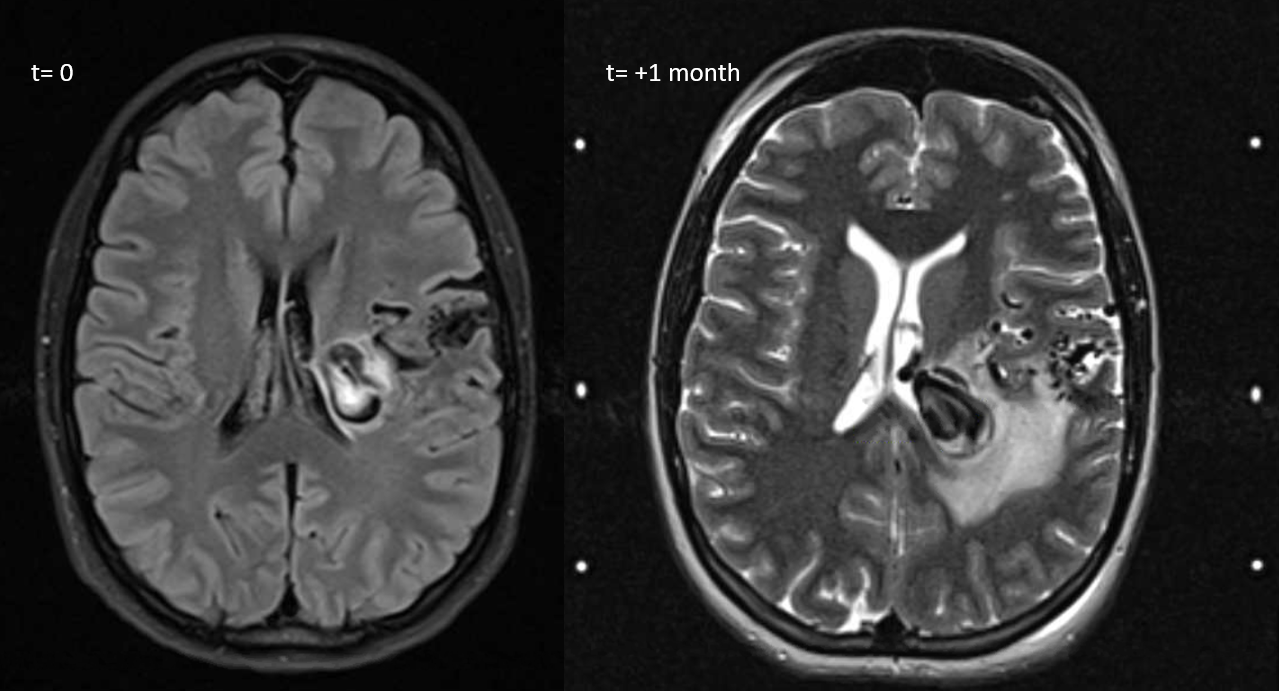 Pre-embo:  notice that one does not need to have deep arterial supply to have plenty of deep venous drainage. 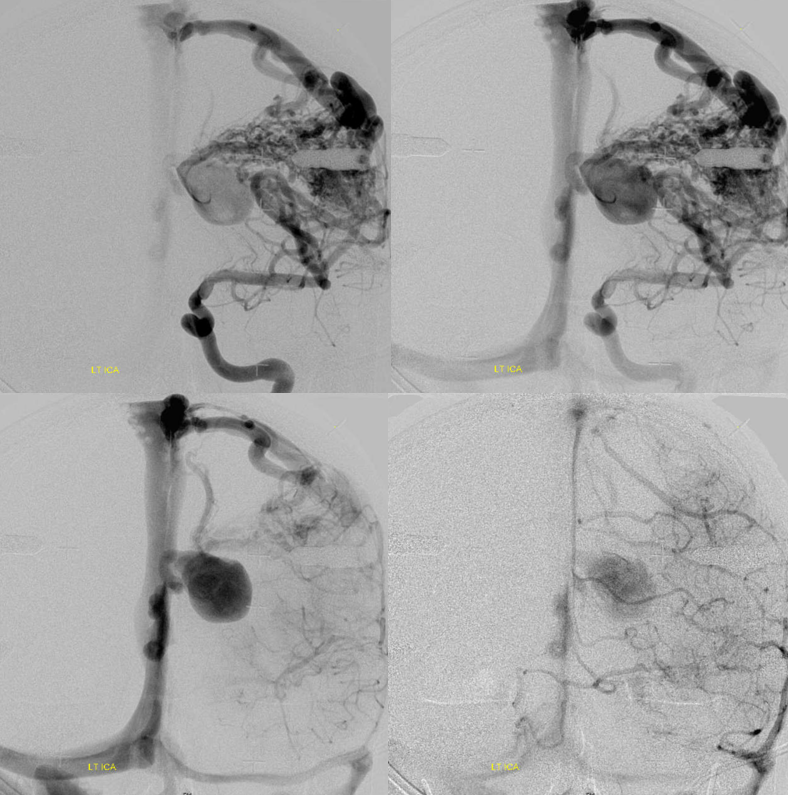 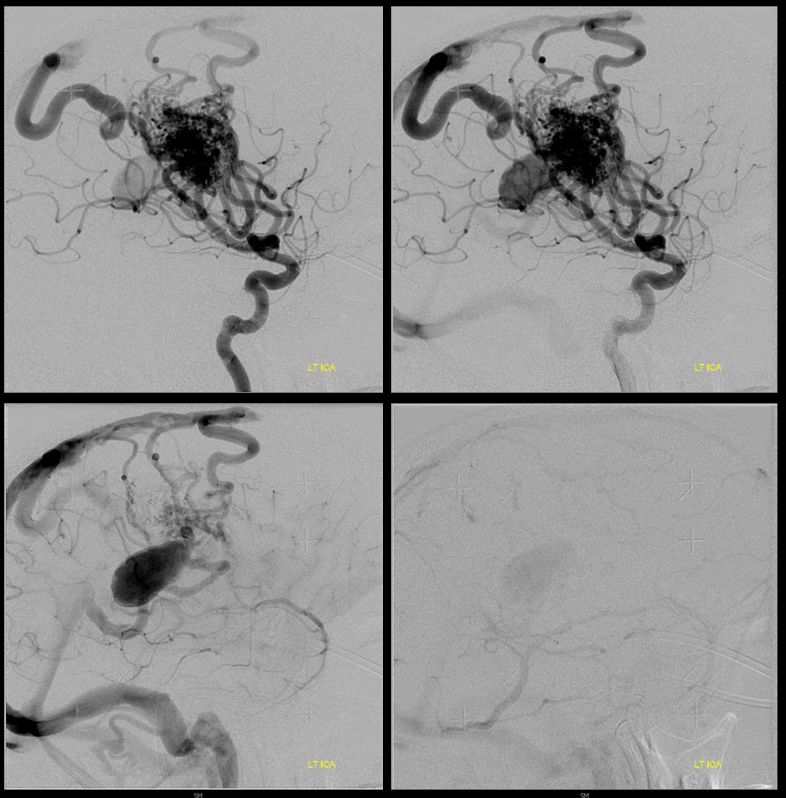 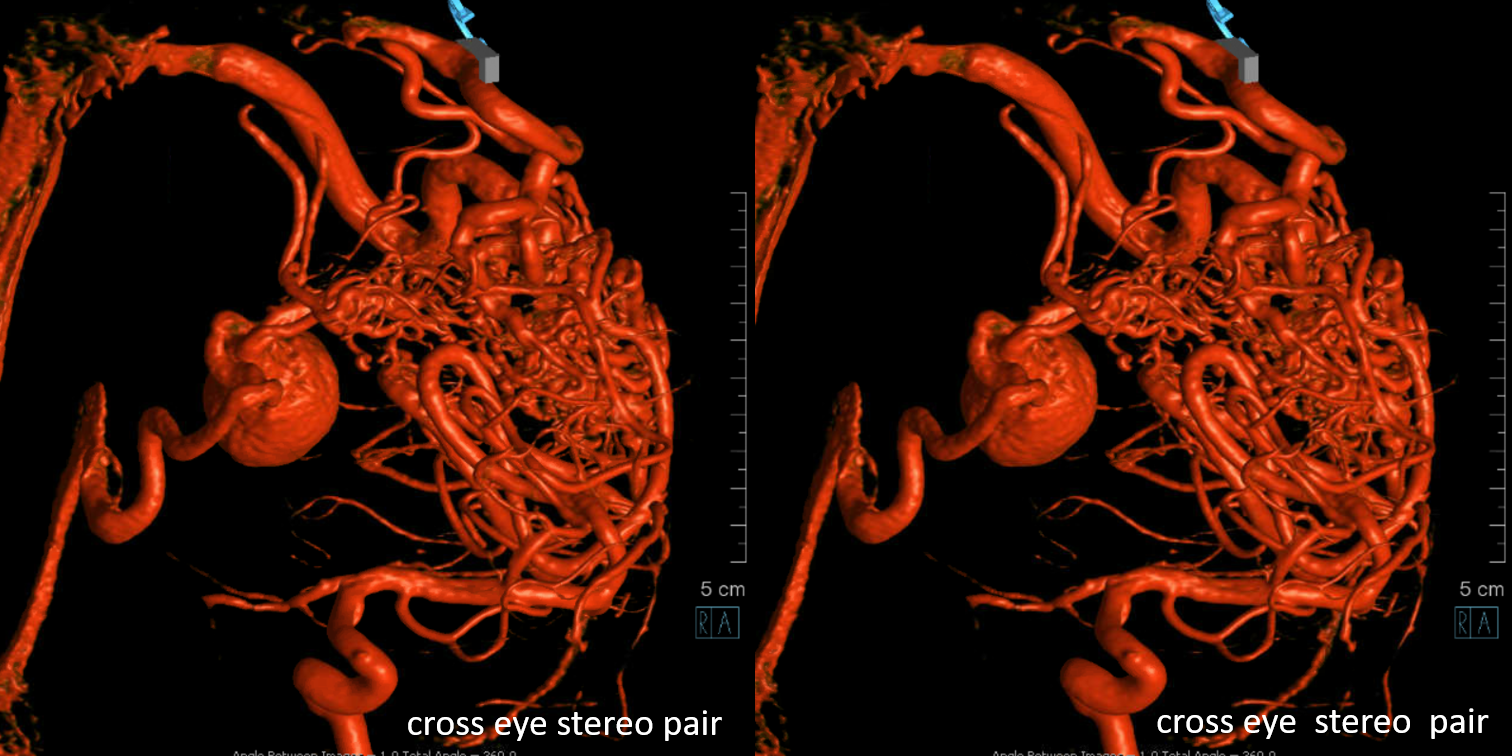 Sagittal MRIs — looking down the barrel of that medullary collecting vein — see how large it is compared to the smaller nidus bottom left picture — because the vein drains deep, it gets larger even though the cross-section of the AVM is smaller in deeper areas.  A functionally separate superficially draining medullary vein takes care of the subcortical and cortical nidus (bottom right image) 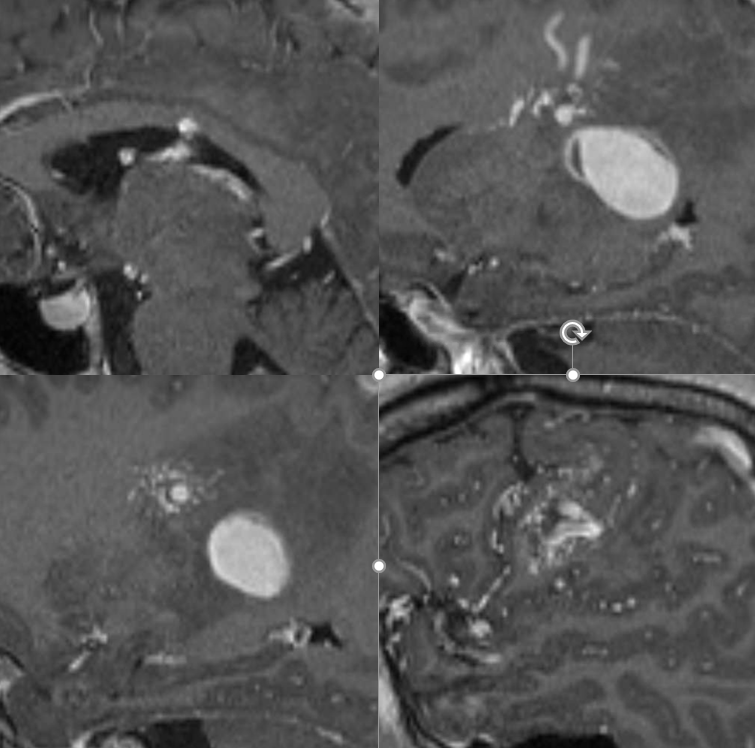 The embo is obviously high risk — there are sensorimotor white matter tracts (and grey matter cells) right there.  Kim Nelson did just fine!

Post embo — mostly nBCA, plus one pedicle with particles (yes, particles are sometimes good for this — to temporarily knock down flow from a position that is not good for liquid embolics).  Post embo — a lot less flow though the varix — delayed arrival and stasis — see clot forming in there? 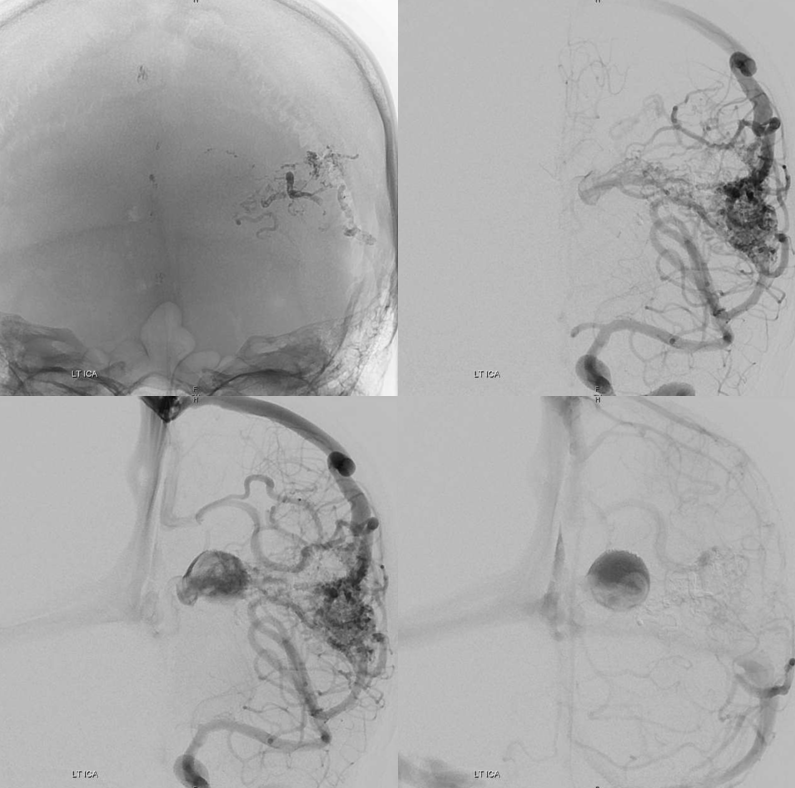 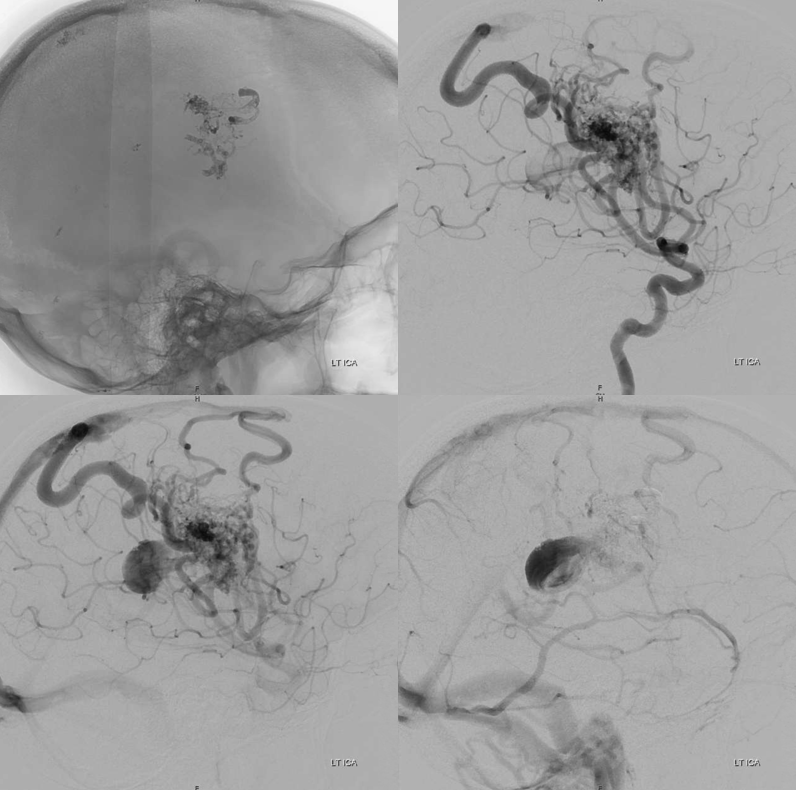 What to do re clot — some heparin overnight and a few weeks of aspirin.  Don’t want to overdo it either.

A year later, the AVM is much smaller.  The deep vein — lets call it thalamostriate — has shrunk and the varix is gone.  A few other notable medullary veins draining upwards towards the parasagittal cortex are still there. 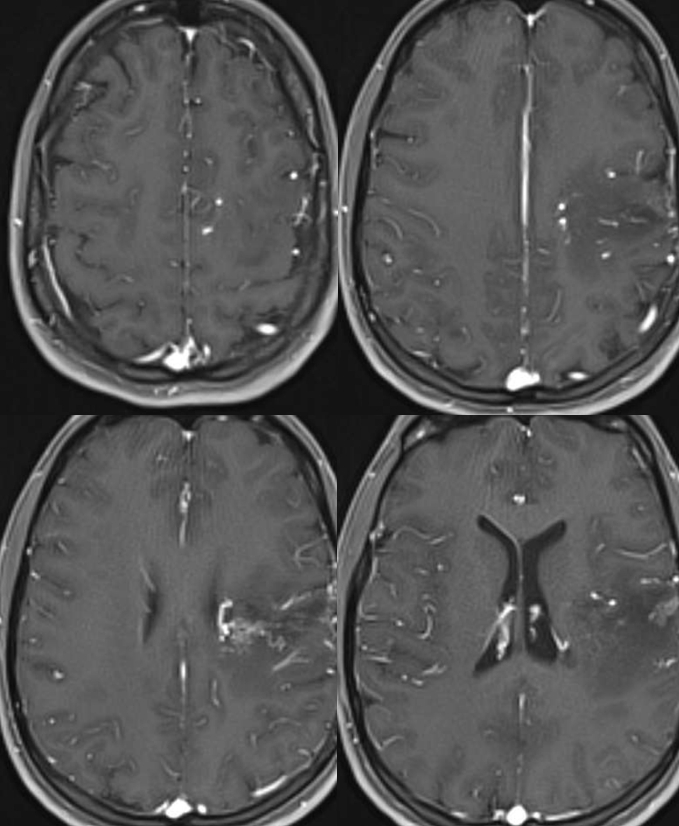 There is impressive “radiation change” — white matter edema extending to subcortical areas.  Some necrosis inside the nidus.  Nothing unexpected.  See that subependymal horseshoe of susceptibility at the lateral posterior border of left ventricle?  Is that a radiation-induced cavernoma? Bleed? A good luck charm, courtesy of Gamma Knife Surgeon? 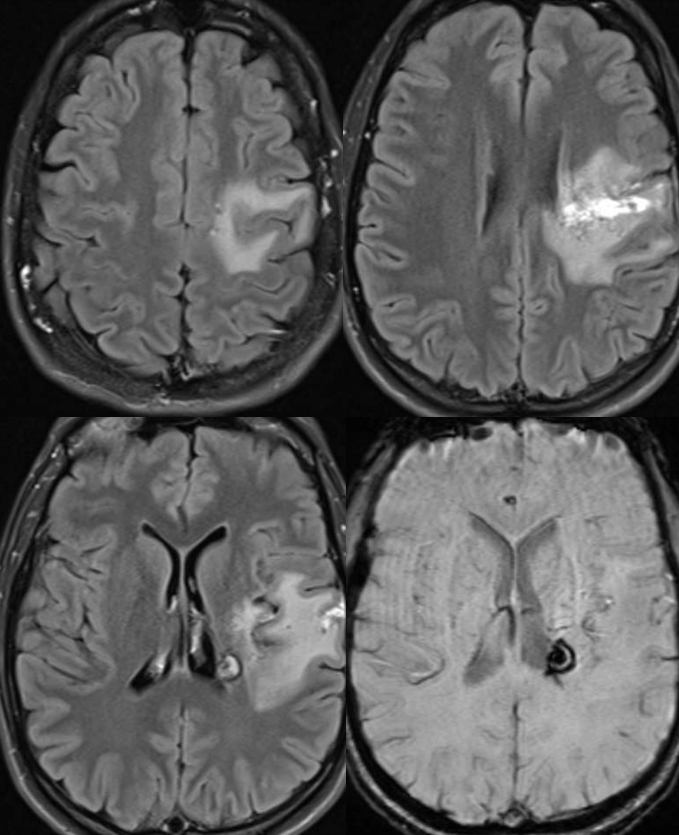 Below is the opposite — a deep extension nidus with some lateral lenticulostriate supply, yet comparatively  very little deep drainage.