Another great case of dural fistula not involving a major sinus — a diverse group of fistulas that seem to involve some almost random part of dura. Usually they are close to a sinus, but not directly in it.  We believe they involve a dural venous channel — click on that for more info.  Any part of dura can form a sinus.  The parasagittal convexity is a very common place for “venous lakes” and dural venous sinuses.

Post T1 — multiple transmedullary veins.  In isolation this is not a specific finding. But it makes one wonder if there is some kind of problem with the superficial venous system, with transmedullary veins recruited to help drain the cortex.  Inner table scalloping again — see later on. 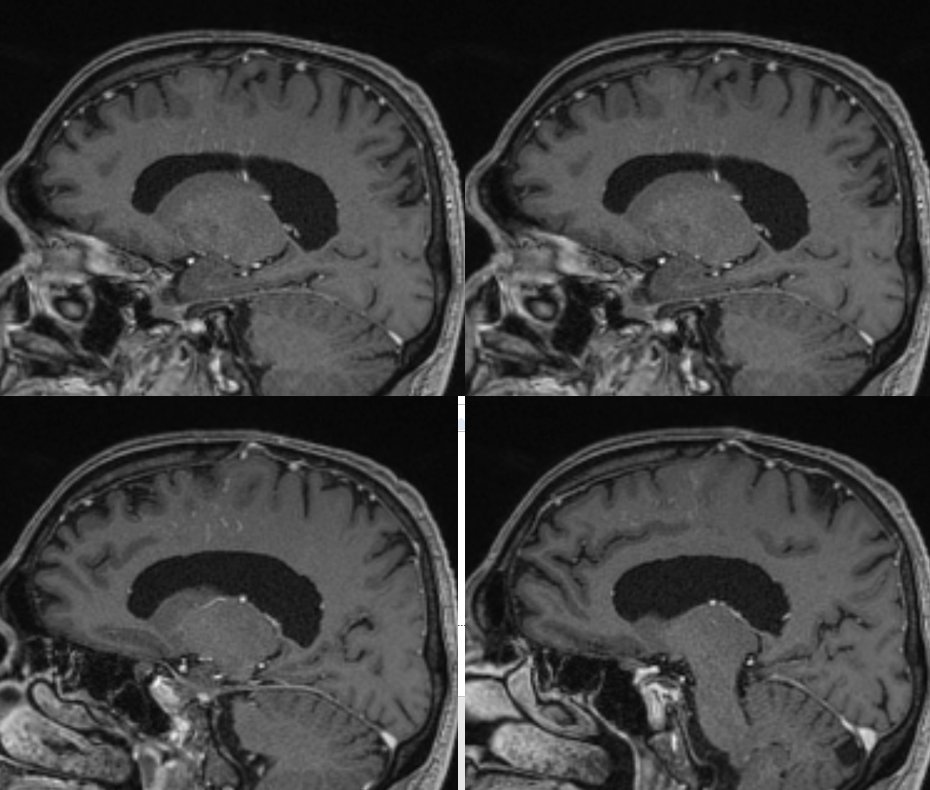 Most impressive is susceptibility-weighted imaging — there is deep venous congestion of superficial siderosis. 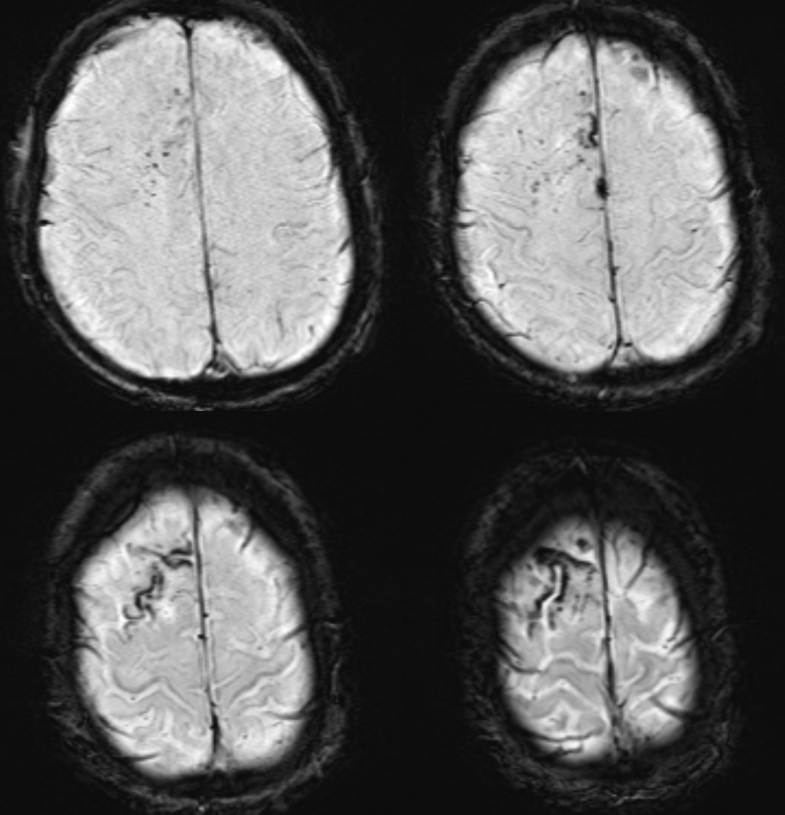 MRA seems to be useless- it does not extend to convexity, but it does show a somewhat enlarged right MMA 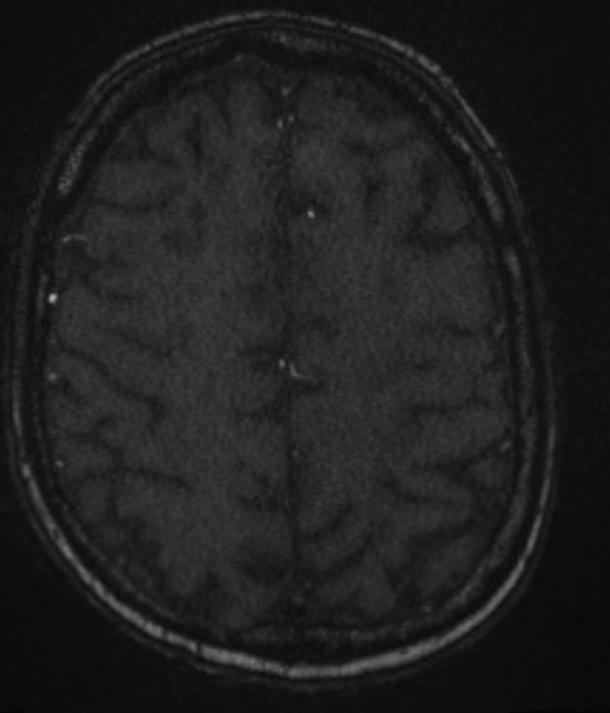 Based on the above, Eytan concluded that this has to be a dural fistula — it does take some advanced knowledge of neuroradiology and specifically vascular neuroradiology — but that’s what this is about.  How to put everything together — a high grade, small fistula with long-standing convexity venous congestion.

Indeed, this is what happens.  The fistula point is marked by arrows.  It is parasagittal, draining into cortical veins, which secondarily open into the SSS more posteriorly.   Some drainage is probably also directed via those transmedullary veins into the deep system.   Another example of how fistulas don’t have to be large to be bad — but they must have venous congestion. 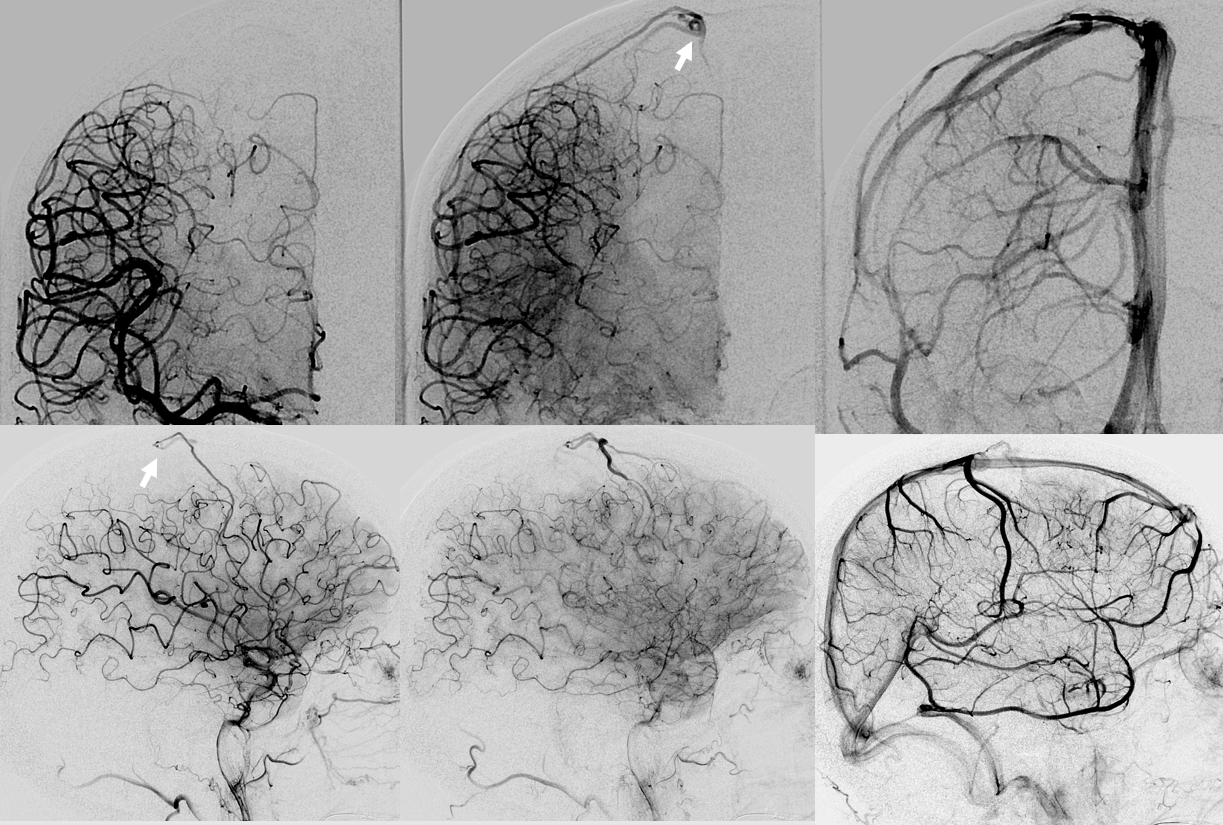 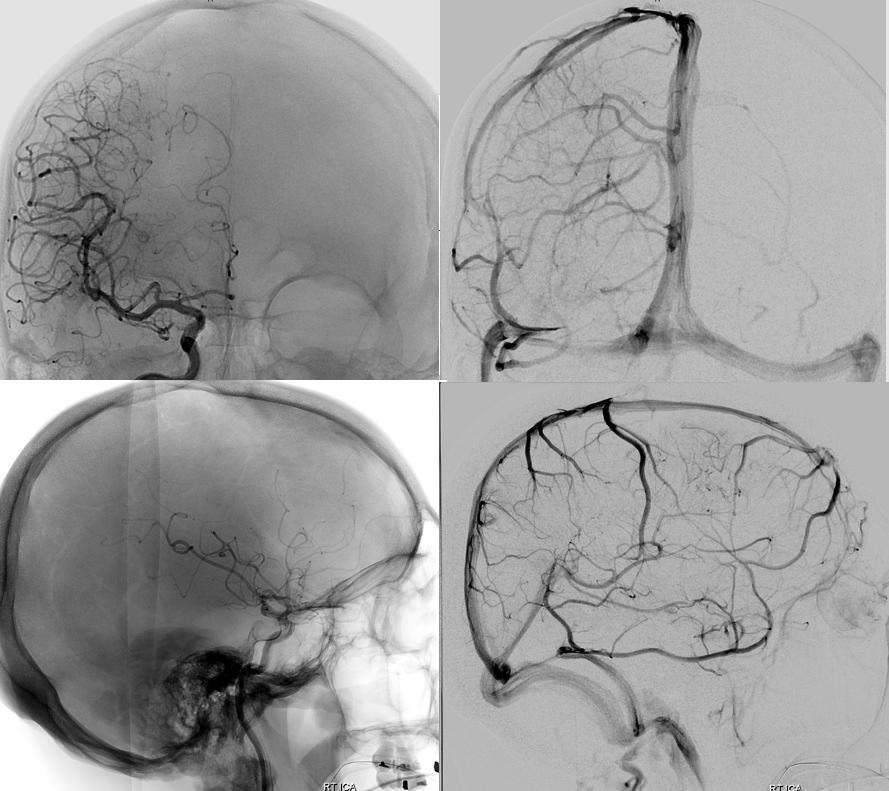 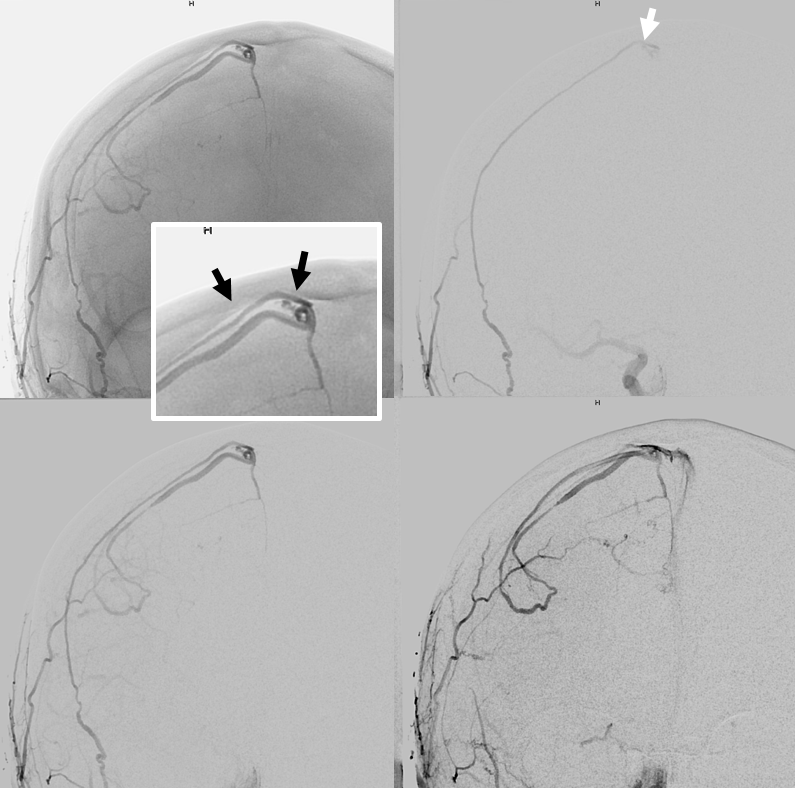 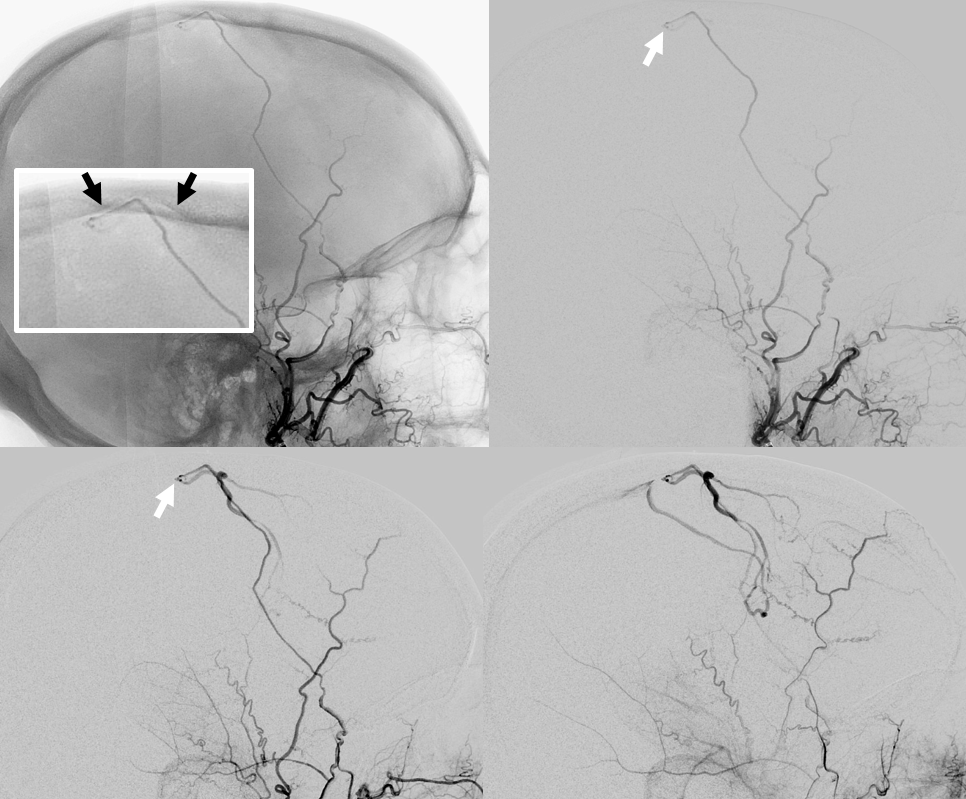 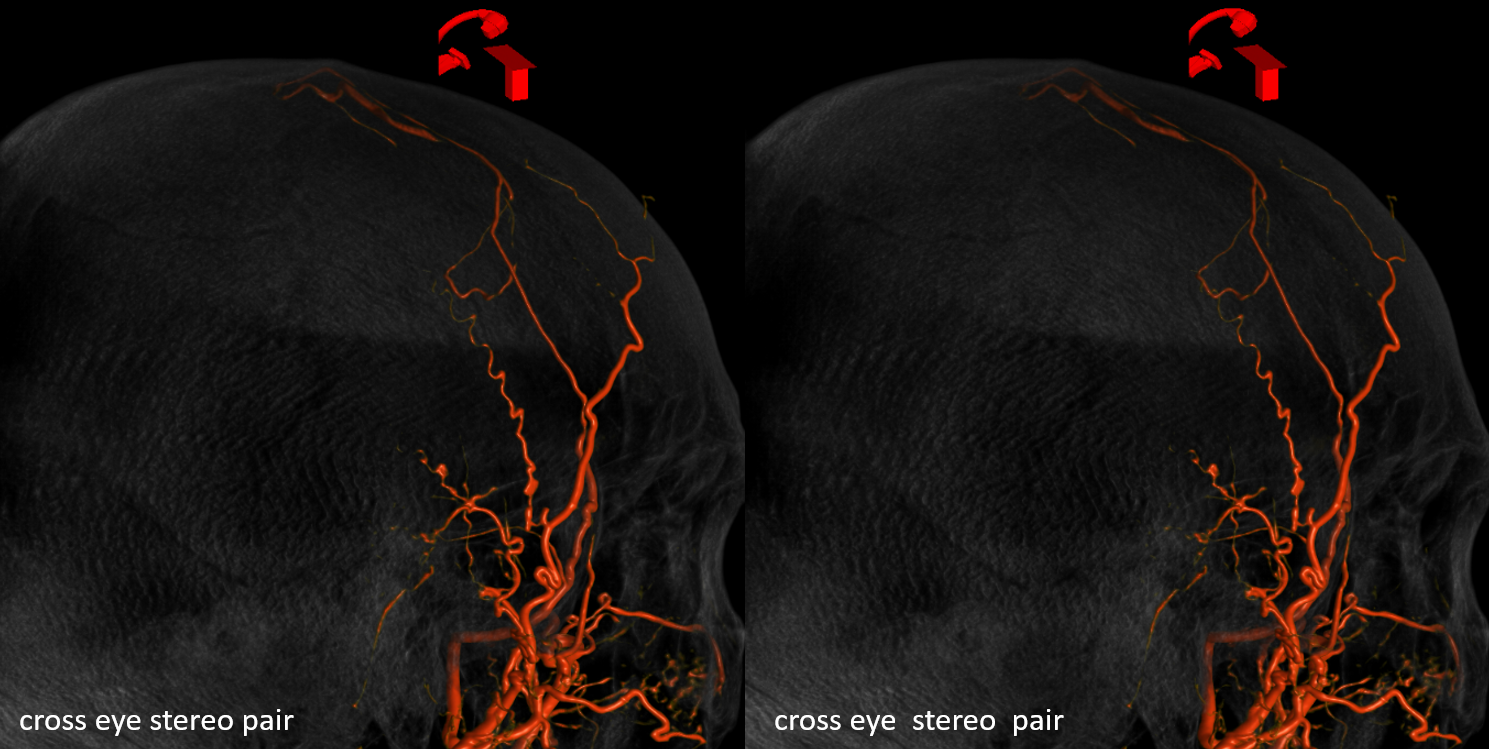 Always check the other side for potential anastomoses… 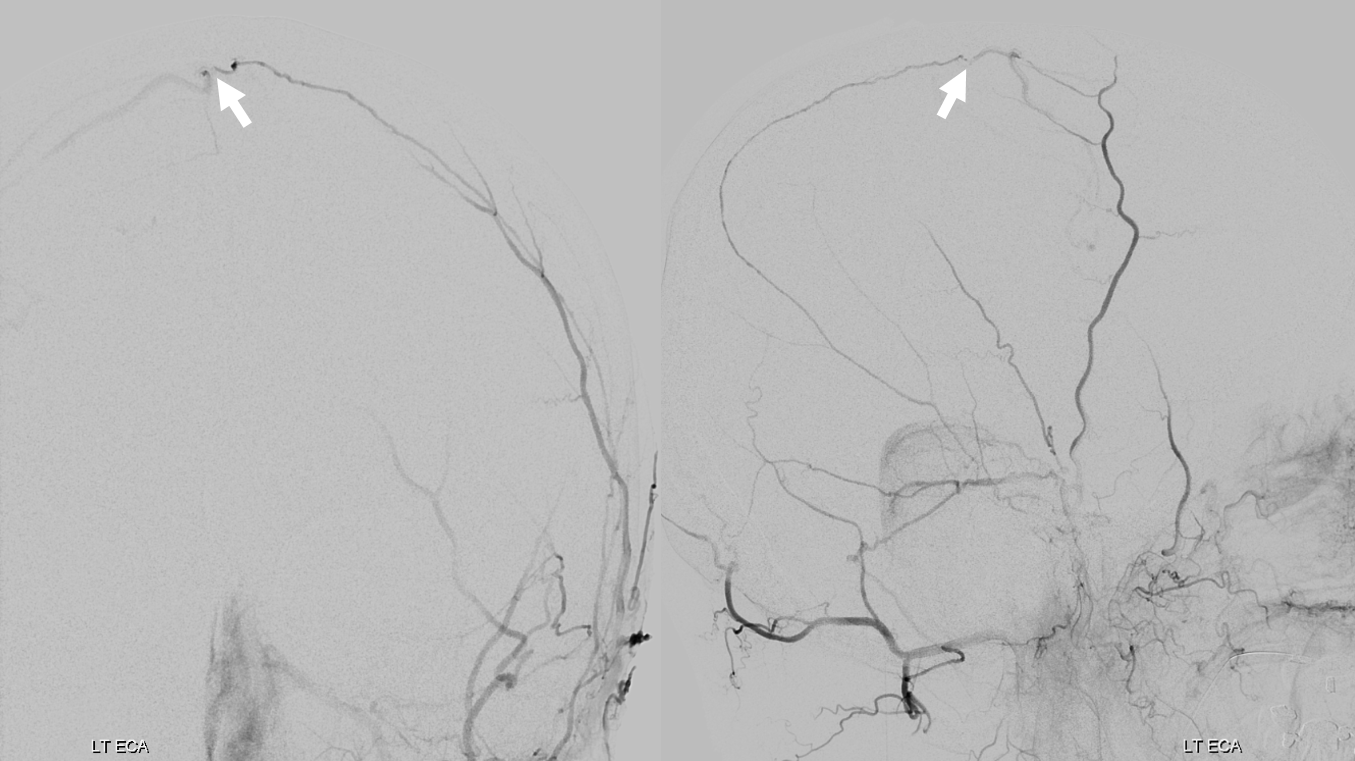 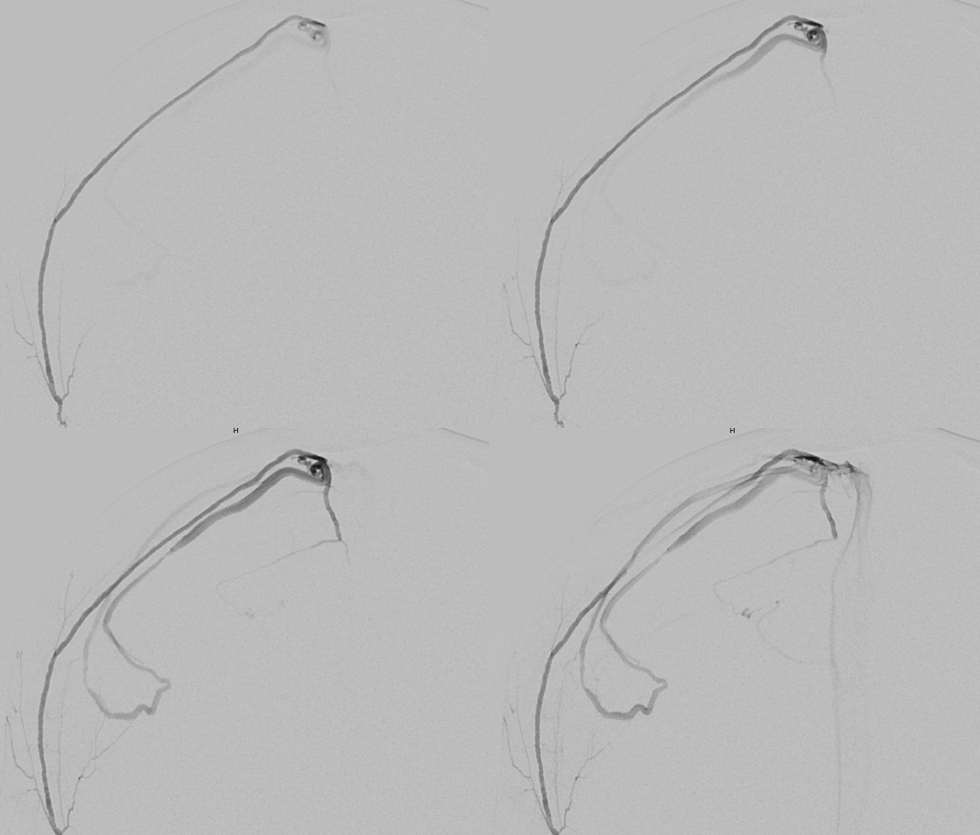 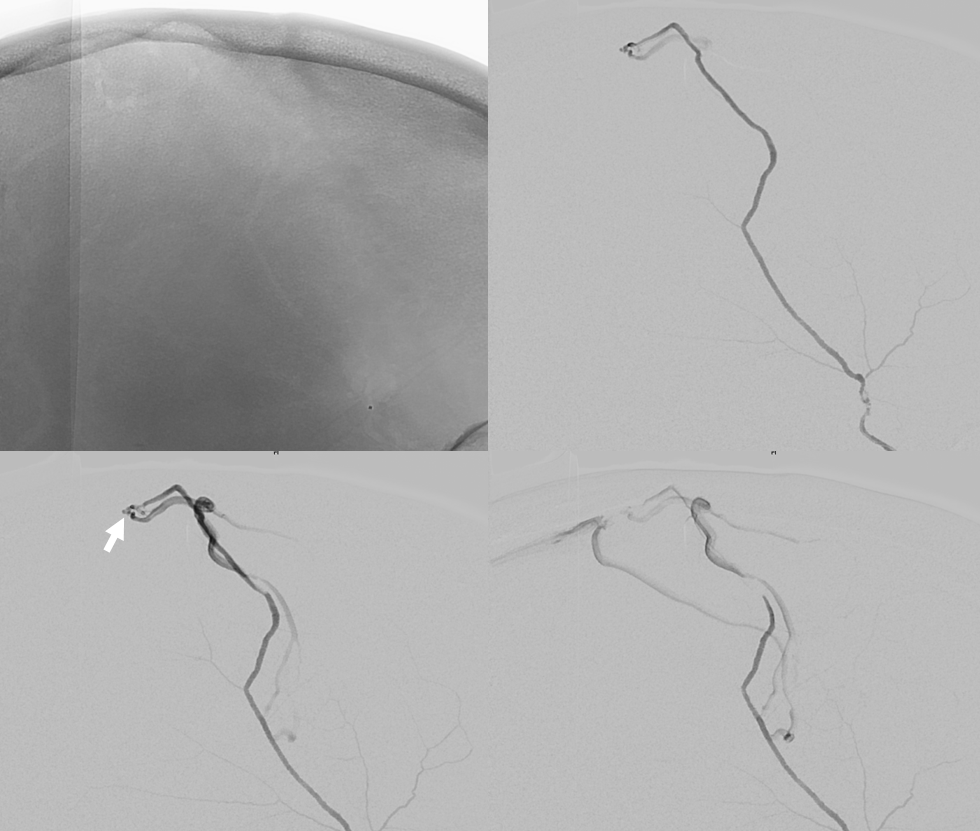 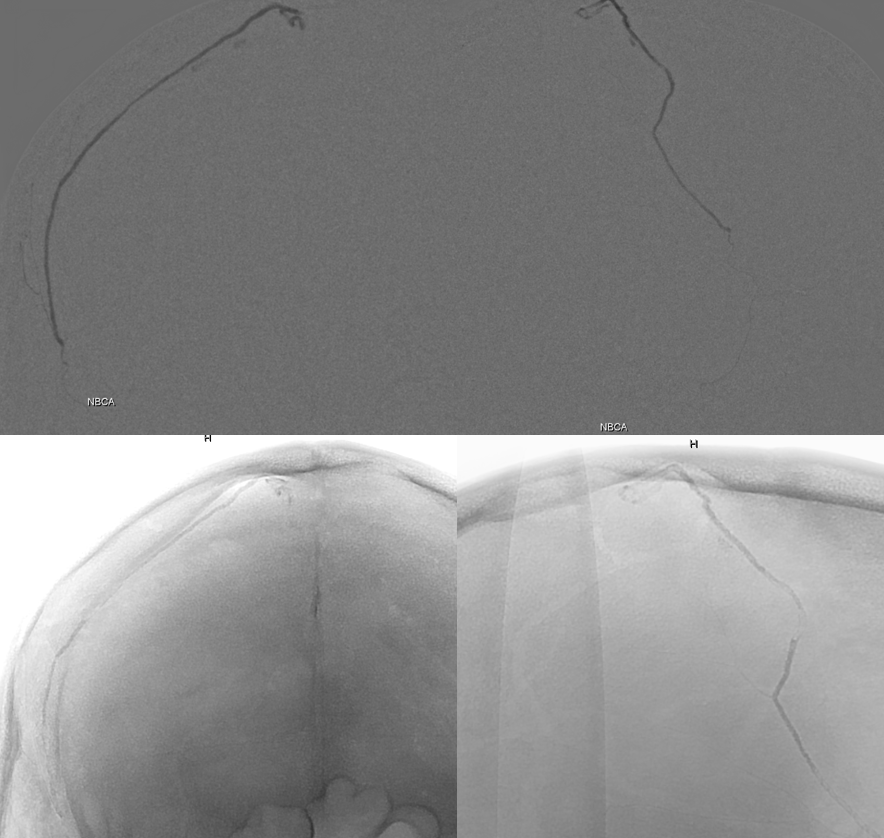 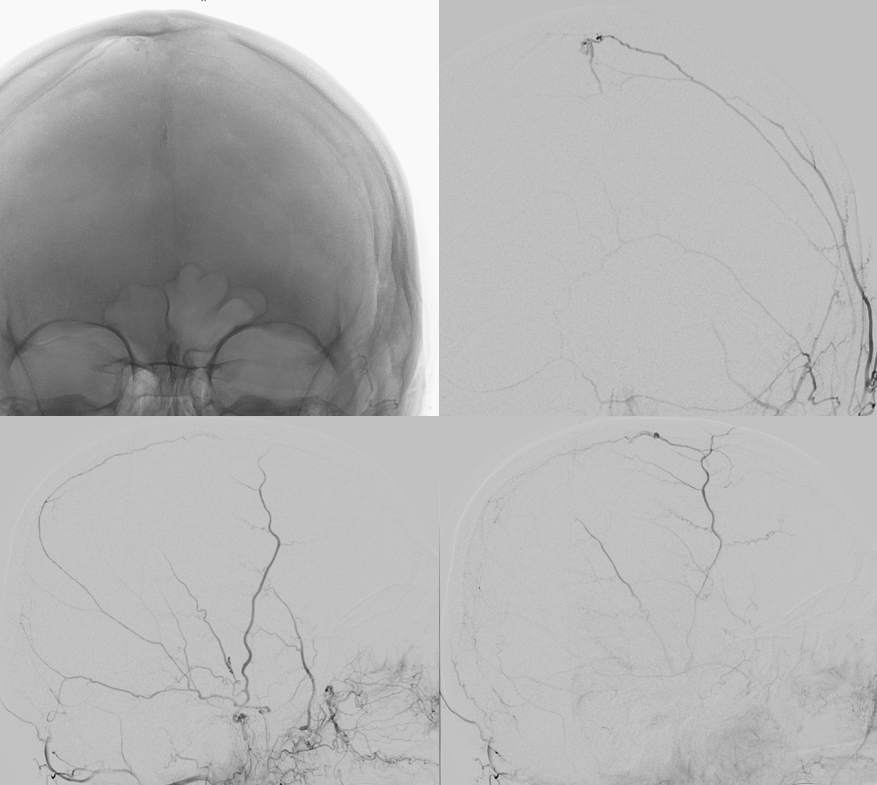 Still alive.. May well die later anyway, but there is not reason not to finish it now

Hybrid J — does it again. 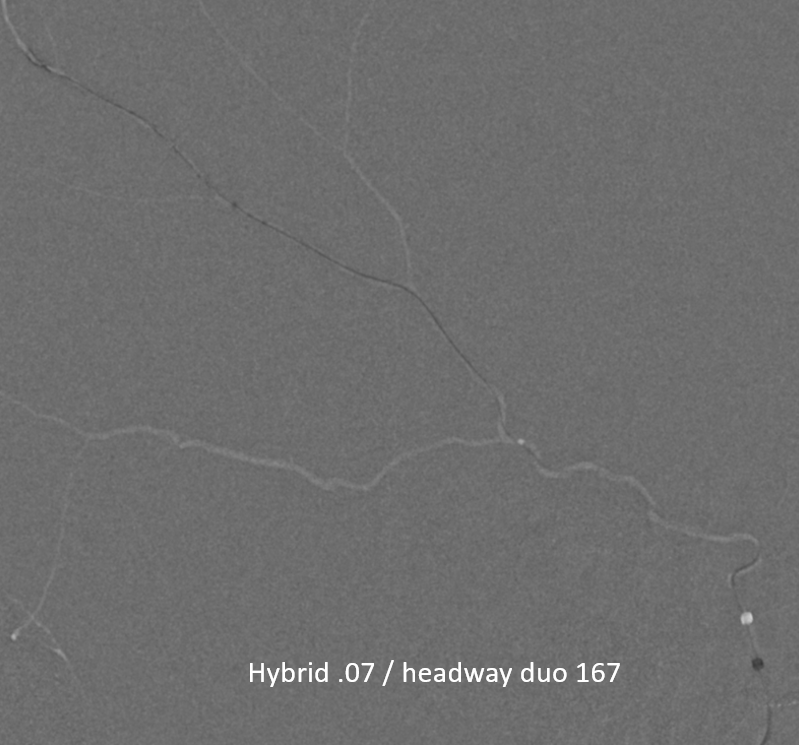 Look how close we are to this shunt (tip = arrow). Ridiculous! 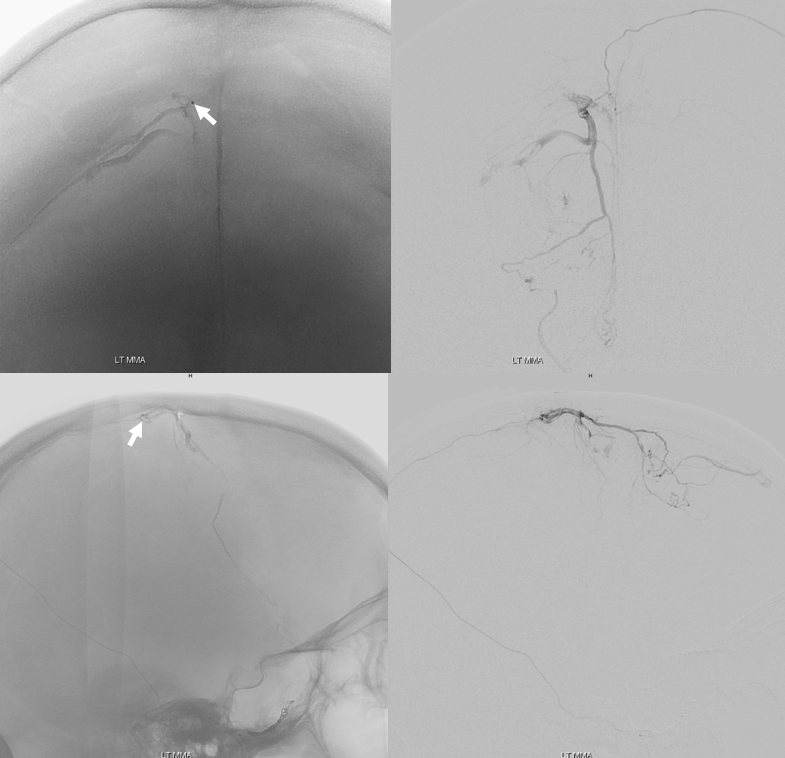 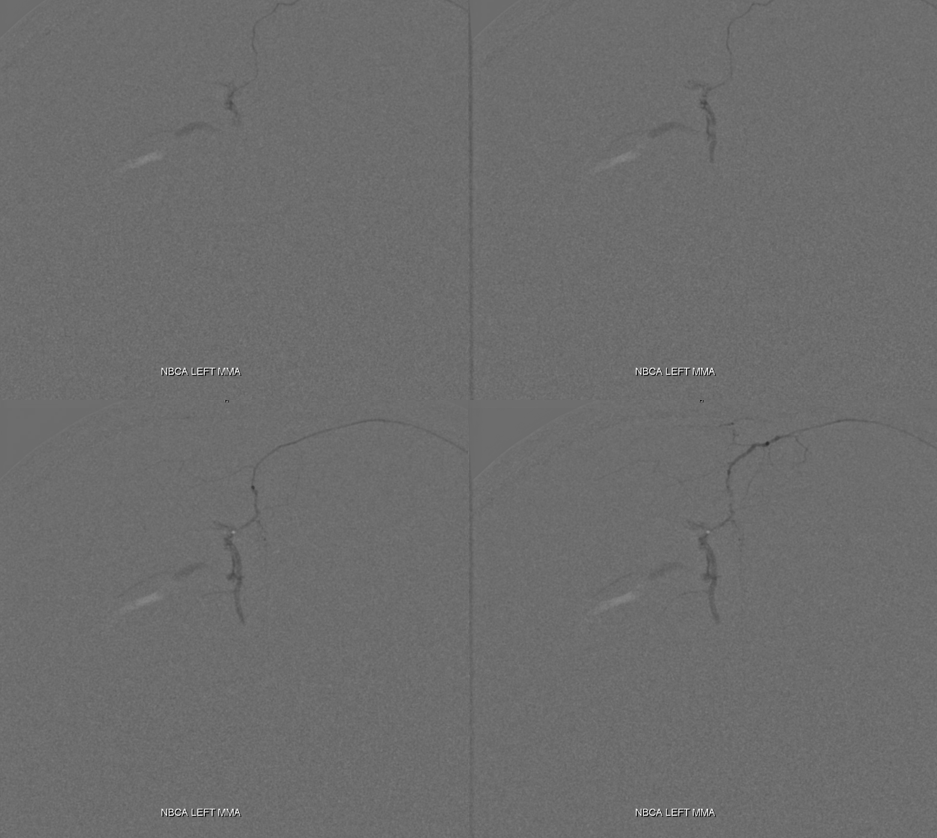 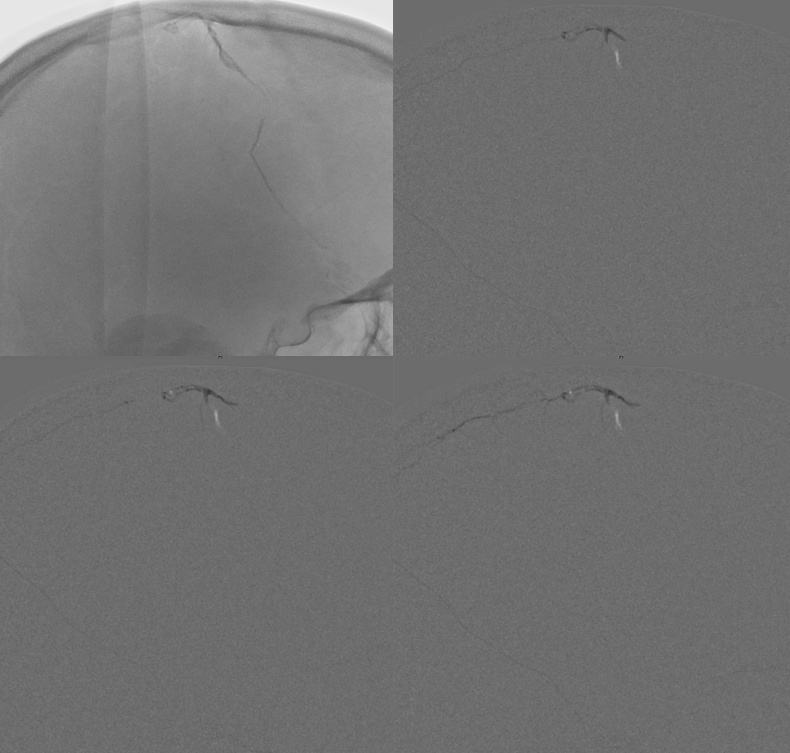 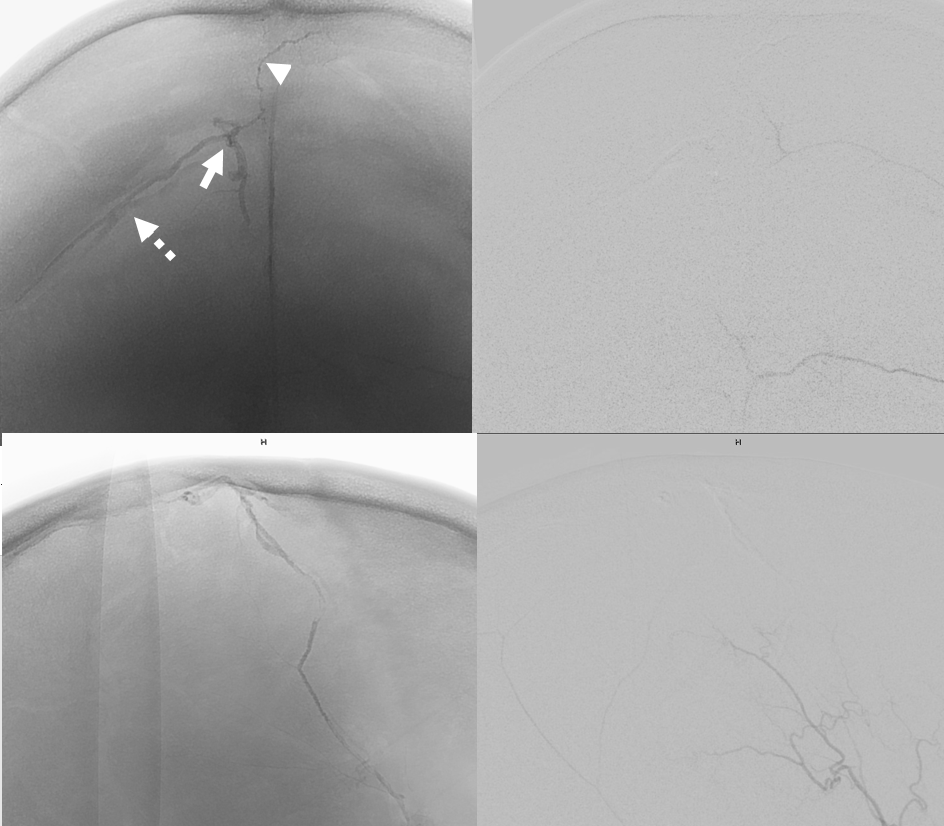 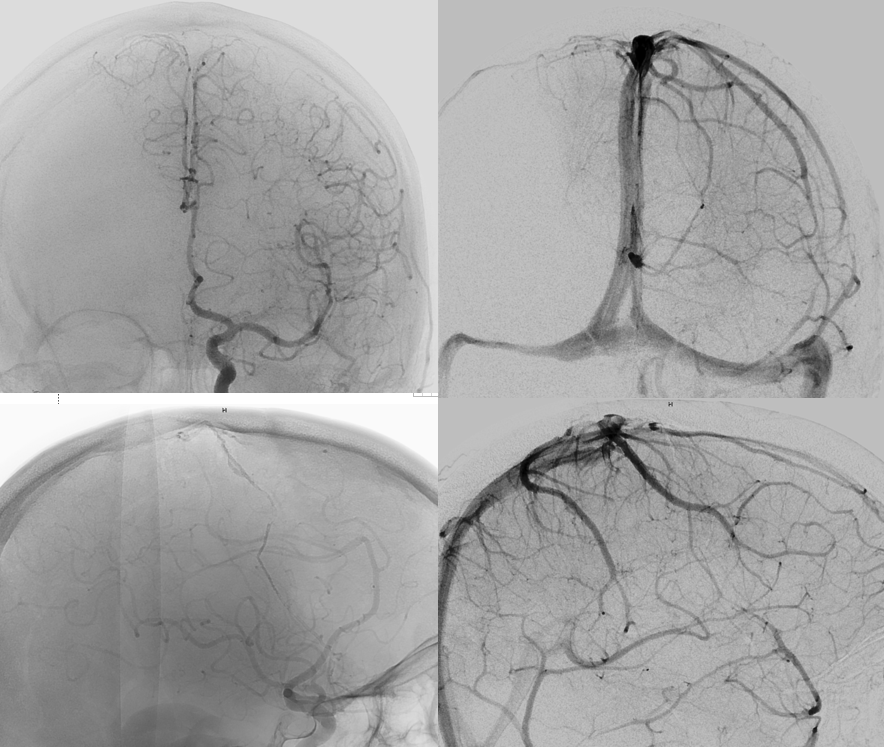 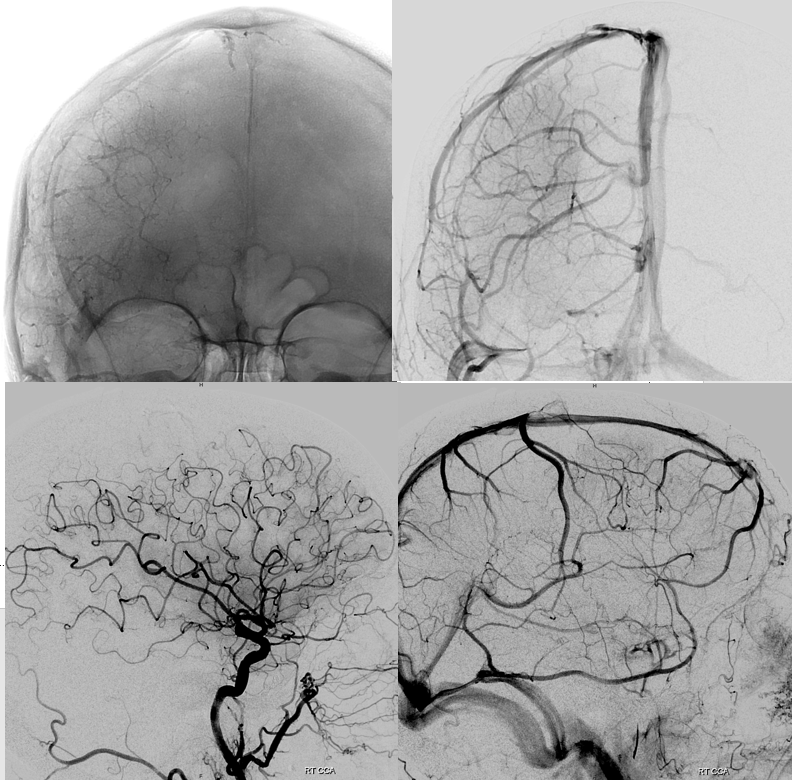 Cured.  Images below show veins previously used by the fistula now being used by the brain in normal brain venous phase (arrows)