This is another example when embolization becomes essential rather than optional.  This patient presents with progressive ataxia and nystagmus.  A large posterior fossa mass, presumed hemangiopericytoma. Notice enlarged vessels at the base of the tumor.  Also note adjacent brain edema which usually implies pial invasion and pial supply 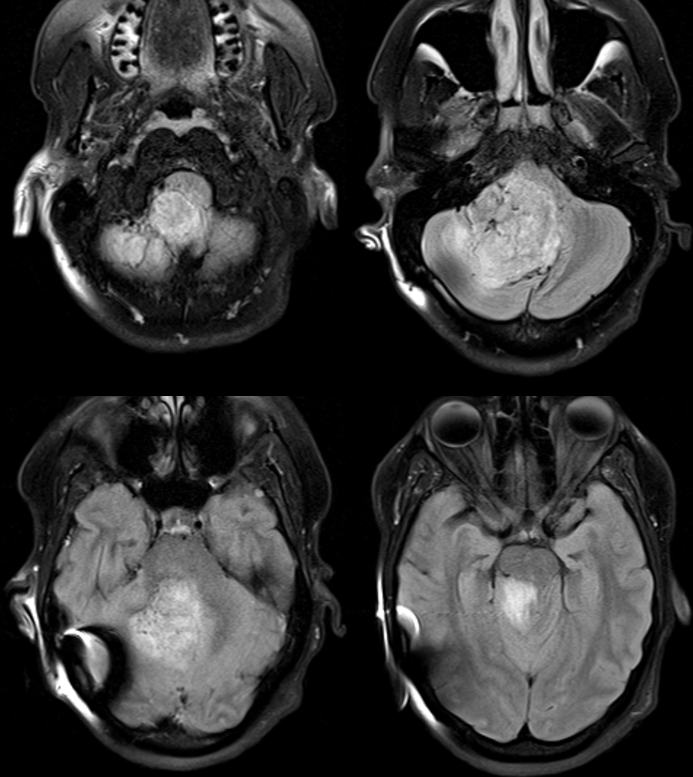 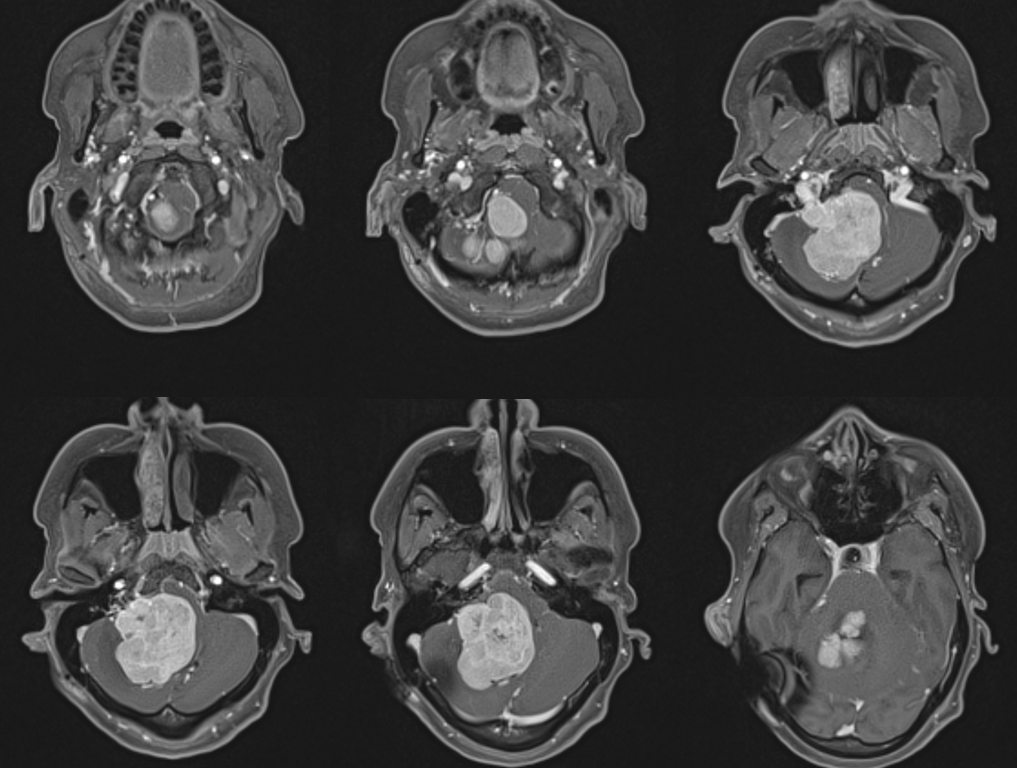 Right ICA injection shows no MHT/ILT contribution.  Both transverse/sigmoid sinuses are patent, so patient can tolerate loss of either. 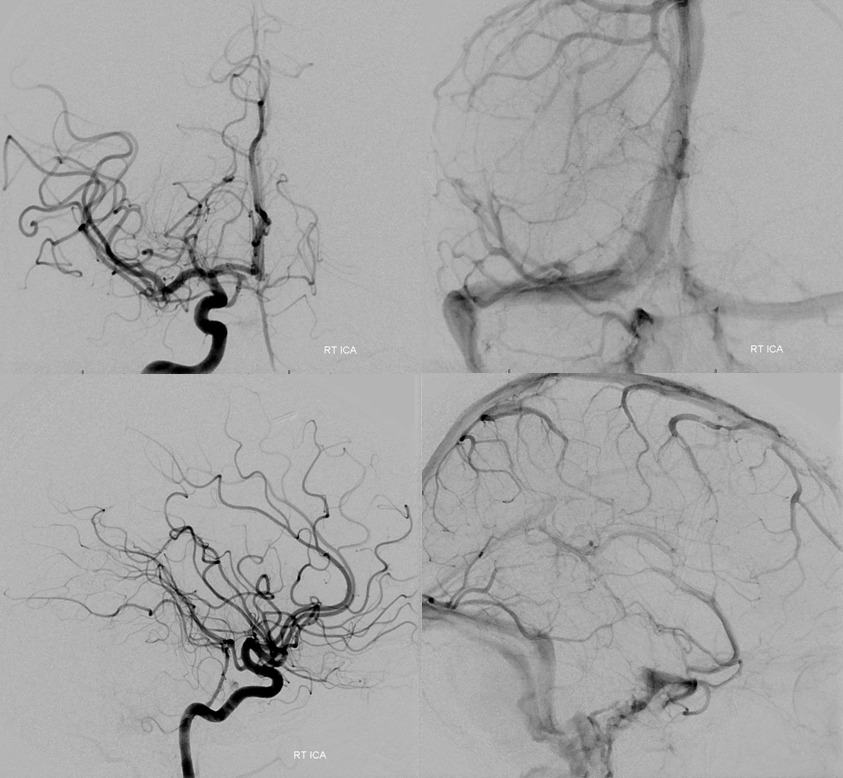 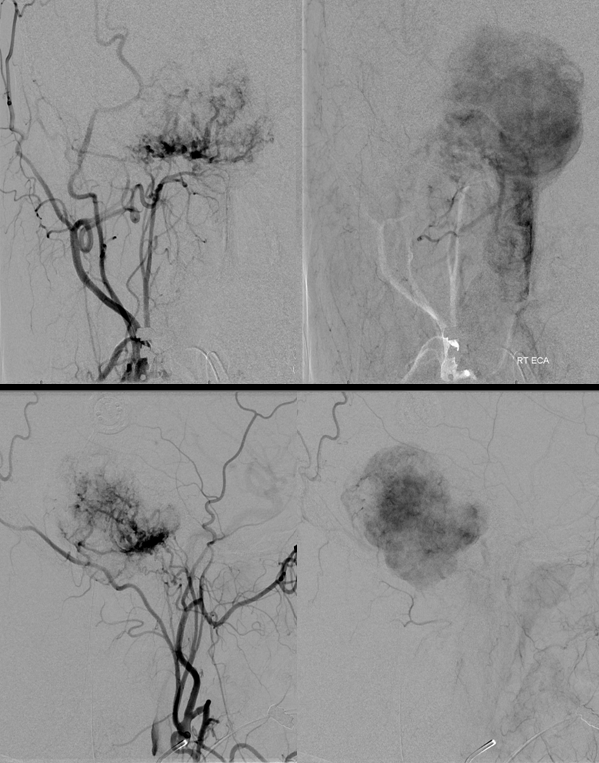 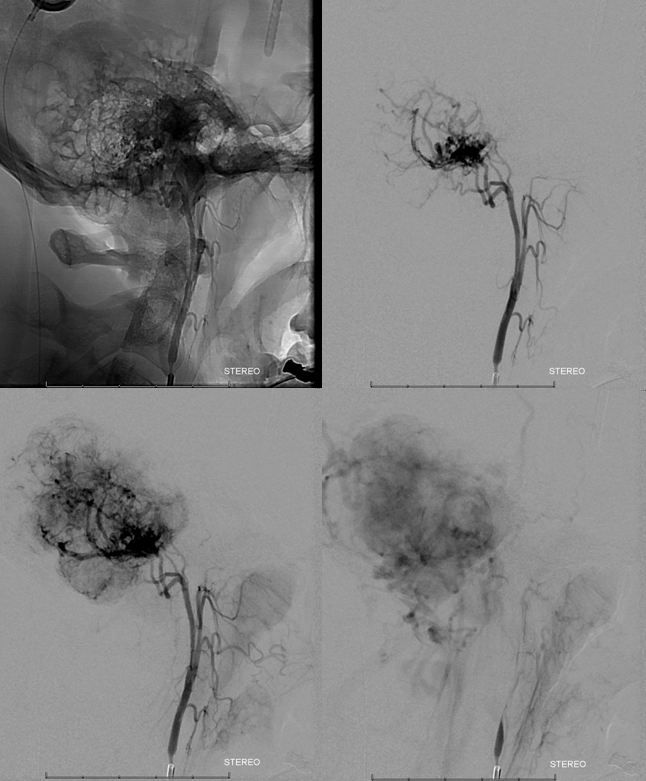 Occipital artery contribution via a transmastoid branch — probably the safest branch to embolize, as it is not associated with any cranial nerve. 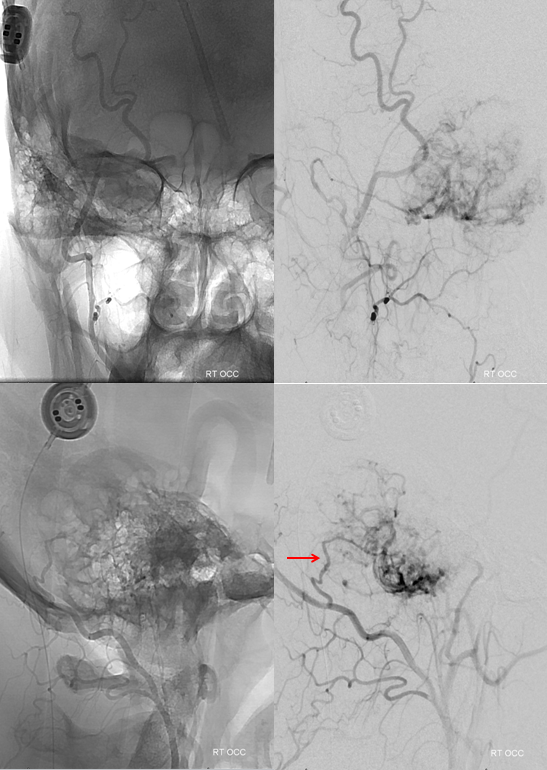 Distal ECA shows no supply from the MMA.  Minimal contribution via the anterior tympanic branch is seen 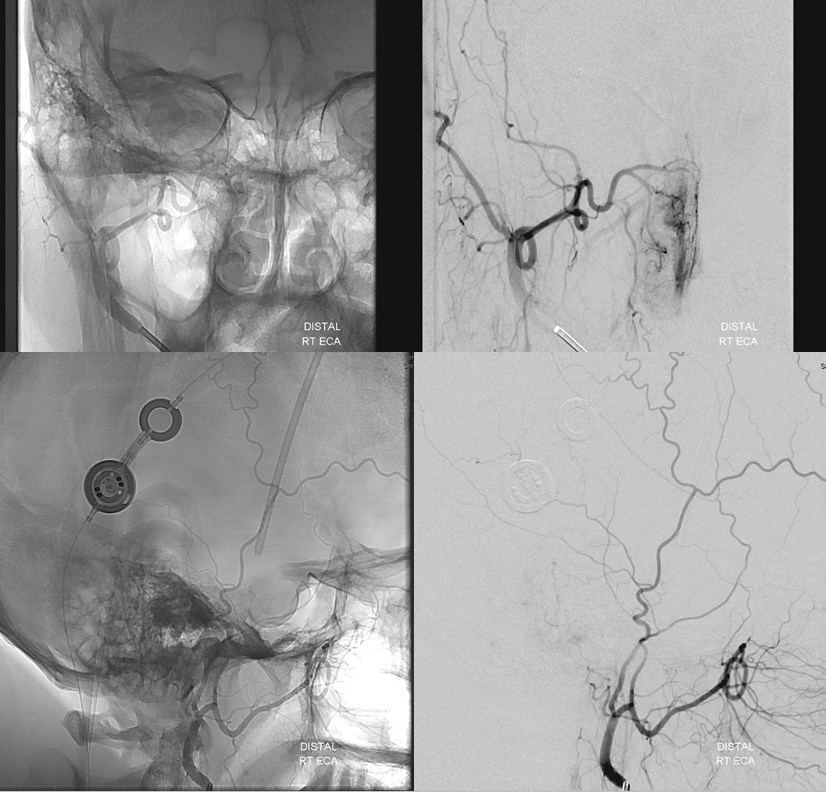 Pial invasion is confirmed by presence of AICA and probably PICA supply.  However a large part of vert contribution is also coming form the posterior meningeal branch (red) 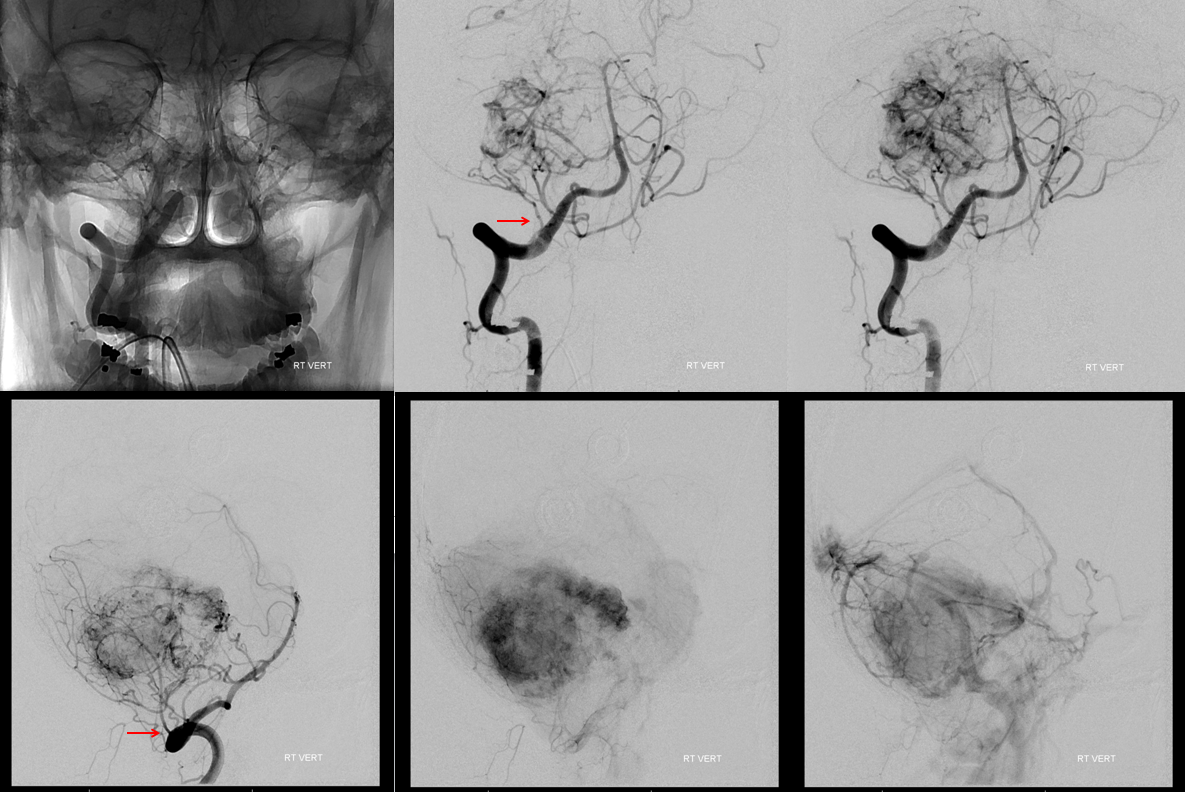 We decided to begin embolization by investigating extent of AICA contribution.  Microcatheter injection does not show very much 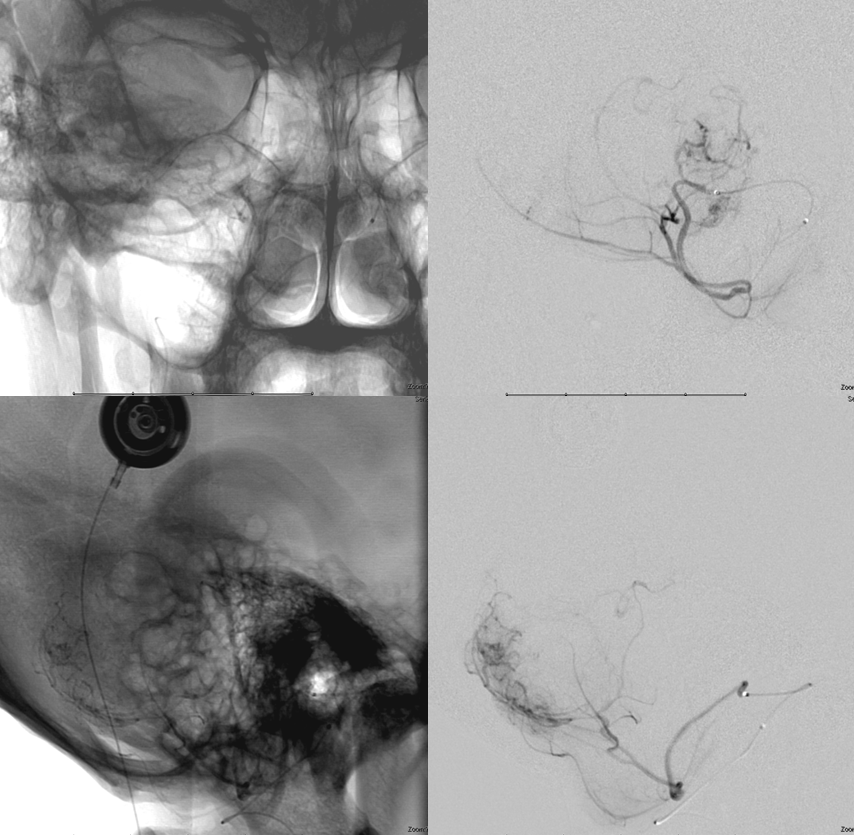 PICA supply is even less 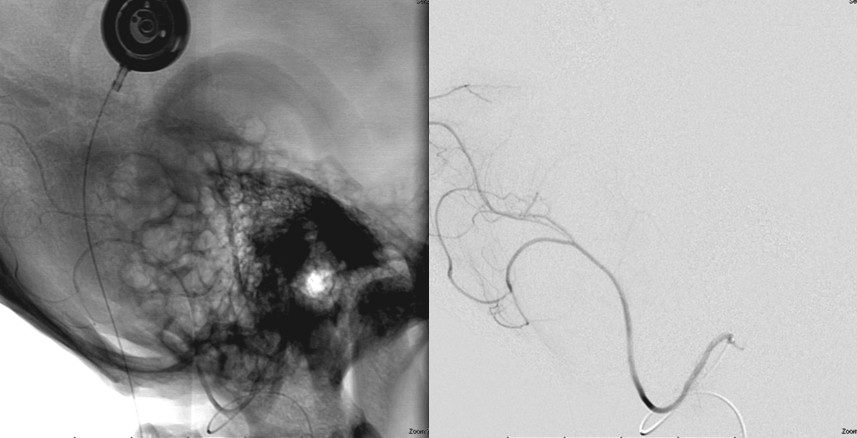 So, we go to the usual suspects. Microcatheter injection of the neuromeningeal trunk, pre-embo 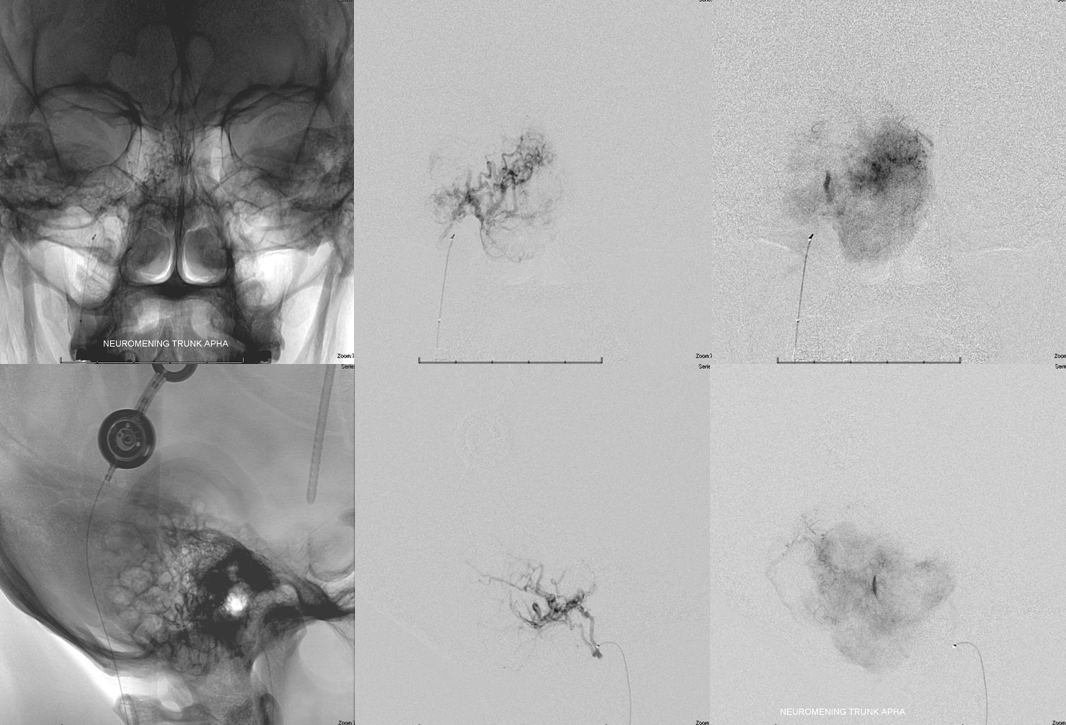 Next in line is the transmastoid branch.  Notice, however, that embolization of the ascending pharyngeal has increased the conspicuity of the styloid branch (red) contribution. 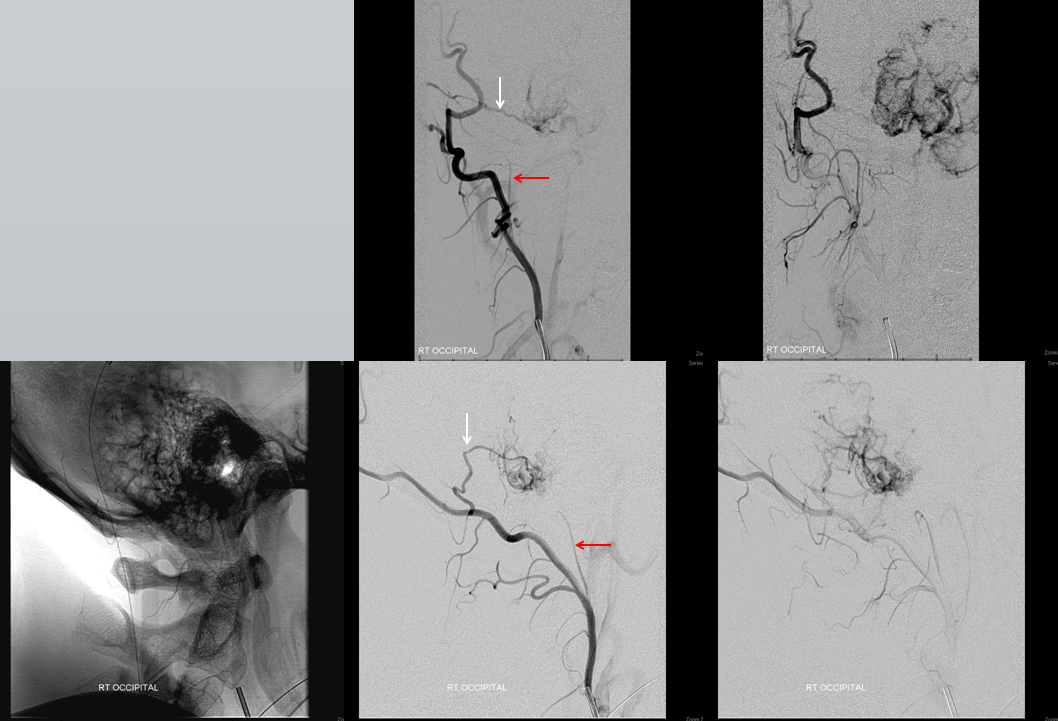 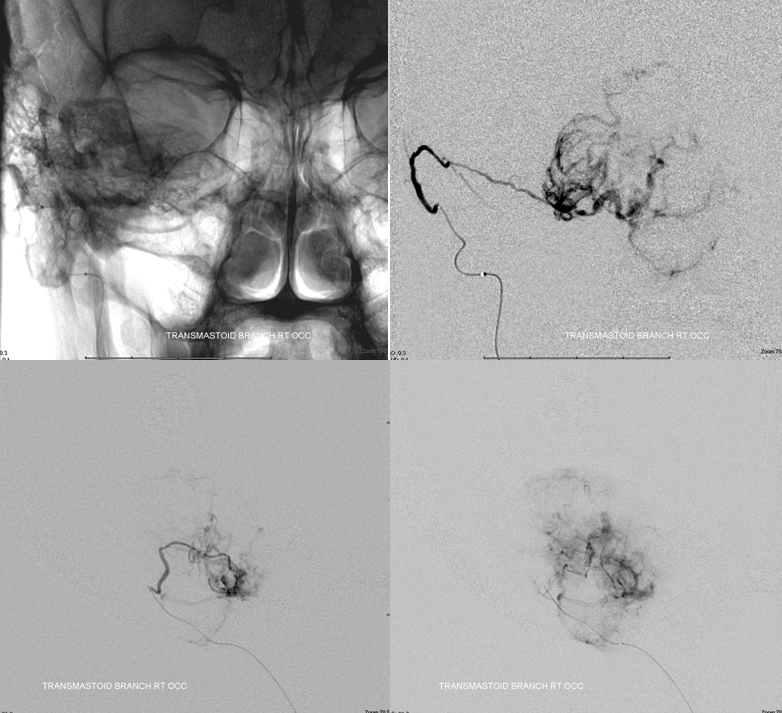 Post-embolization.  Only trunk is visible. The parent branch is then closed with coils to prevent early recanalization of embolized territory

Now for the stylomastoid branch.  Although contribution seems small, you never know how much permeation each pedicle will yield.  The stylomastoid branch is part of the facial nerve arcade (the part of the nerve in the stylomastoid foramen classically) so patients should be consented for the possibility of facial nerve issue.  Again, with Contour particles this is rare.  This may not be true of other particles, and definitely not true of Onyx or nBCA, so we never use them in tumor embolizations in sensitive locations. (We do use nBCA for fistulas and other things from ascending pharyngeal location, MHT, ILT, and other possible cranial nerve spots, but it is better to be as distal as possible and the probability of nerve injury is quite real. In our experience, there is less cranial injury with nBCA than Onyx).

The stylomastoid branch yields a ton of tumor to embolise. 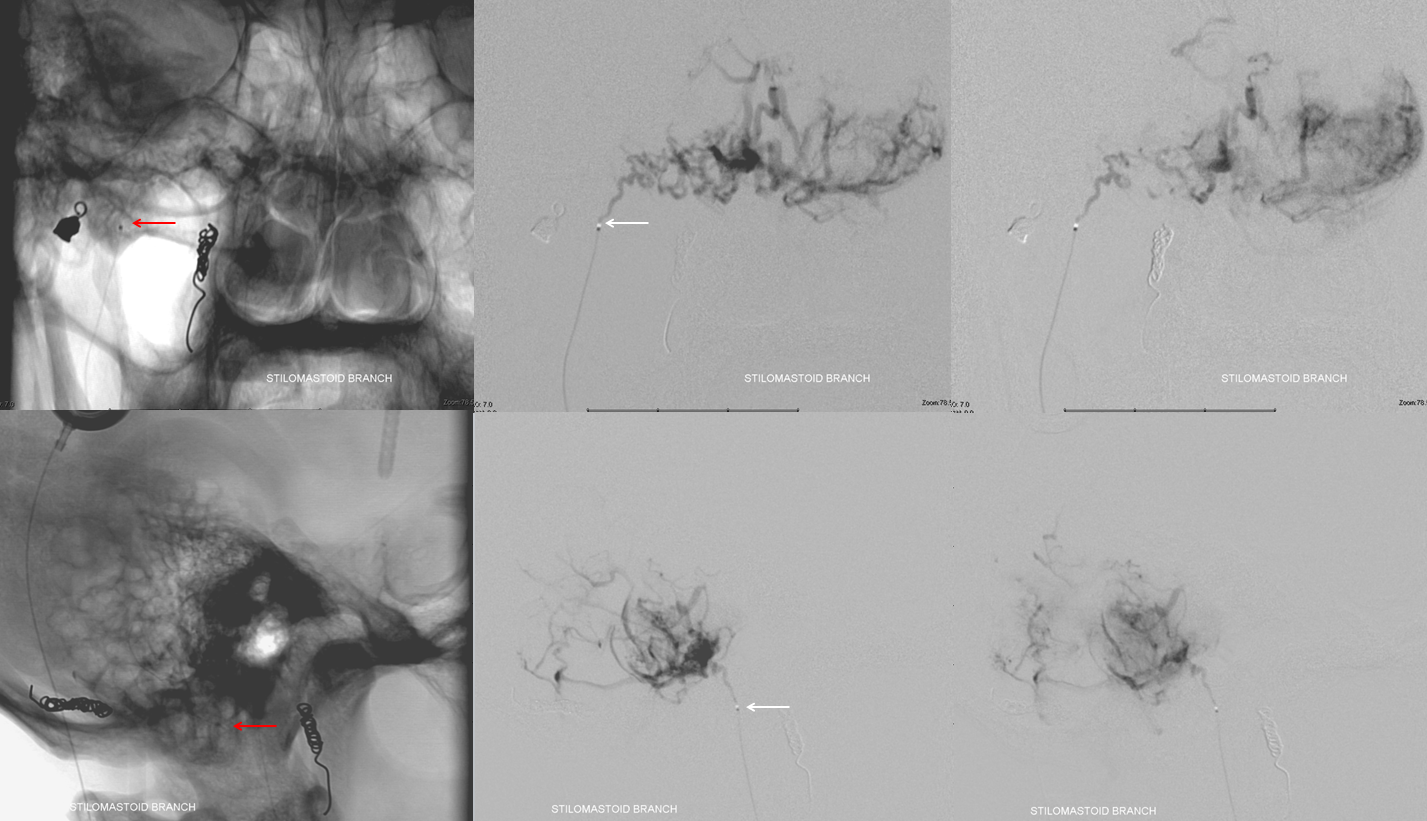 That’s a ton of tumor, right? That happens sometimes after embo of other feeders — the remaining feeders now pick up what’s left of the tumor parenchyma.  This argues for taking care of small feeders first  and leaving the big trunks for last.  The problem with this approach is getting bogged down in small things or experiencing a problem early on, to come to the big trunks hours later, which has some real disadvantages.  In this case, because of the pial nature of AICA supply and the obvious hazards in embolizing the AICA, we chose to do everything else first.  Also, some positions allow you to push particles into territories of other feeders, so we counted on possibly getting to the AICA from some other position instead of embolizting it directly.  However, unlike the AICA, we felt pretty good about taking small particle embo risk in the stylomastoid location.  Just remember that his page is not meant to suggest to anyone what to do.  Purely educational… Just sharing what works for us.  And it sure works.  Look at all this tumor we can get…

However, this is not always consistent. Sometimes, particles clump in bigger trunks.  Then, they unclump and what appeared to be previously embolized areas open up again.  Or, better still, the particles find ways into areas primarily supplied by other branches (like the AICA).  This happens especially when there is a wedge position in the currently selected pedicle, which allows one to push the particles through the tumor microvascular bed into other areas of tumor.  This must be done carefully though, as there is some risk of rupturing the pedicle one is currently in.

As the embo progresses, suddenly there is again more tumor to embolize. So we do

Still more.  Because of the length of embolization, everything is done to minimize radiation does.  This means embolizing under live subtraction guidance at 4 frames per second instead of the usual 7.5 or 15.  Most of the embolization is done in lateral plane, because lateral plane dose is usually much less than frontal plane (the head is longer than it is wide, and the skull is thicker in the front and back than on the sides.  Also, the eyes are usually not in the field on the lateral view, and they are almost always in the field in the frontal view). The frontal views we show are snapshots, while the majority of embo is in lateral. 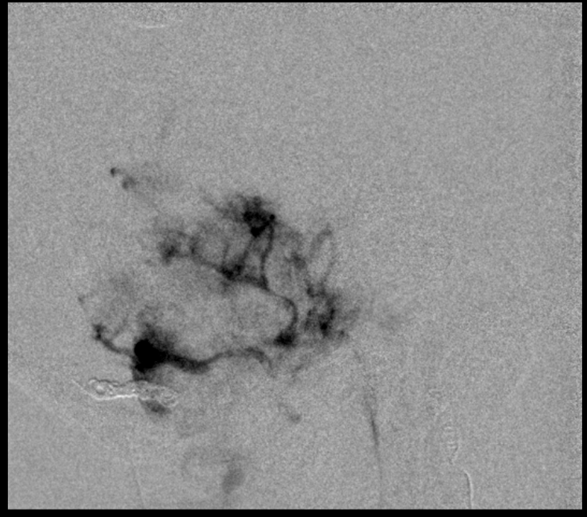 Still embolizing — this is after about 1 hour in this branch.  Notice contrast washing out slowly from already embolized areas (red arrows marking the white areas where contrast has leached out of the tumor bed since the live subtraction mask was acquired), while new areas open up for embolization (black)

At the end of embo, only the big trunks at the bottom are patent. The tumor bed is embolized. This is the key of particle embo — the big trunks are not important — they can be coagulated during surgery.  It is the tumor bed that must be taken down.  We typically leave some coils in the branch we had embolized to prevent near-term particle washout.  We chose not to do so in the stylomatoid branch though 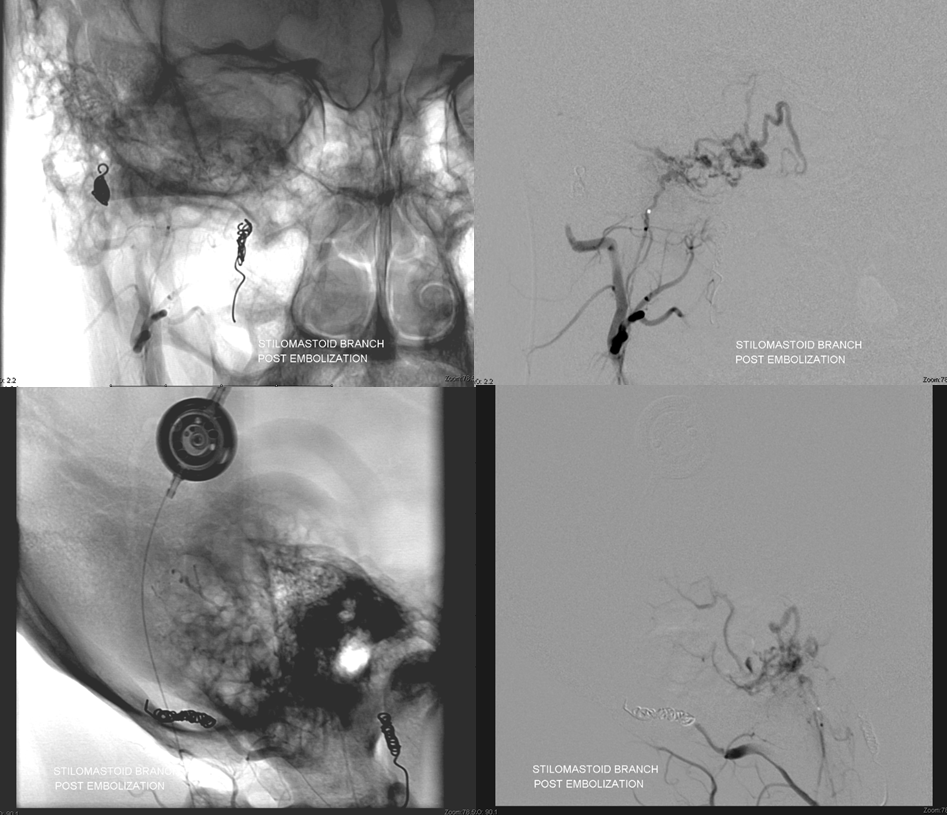 Here is the global ECA after embolization. Not bad. Notice shadowing from super-dense contrast staining at the base of tumor (red arrows) — sign of very efficient embolization 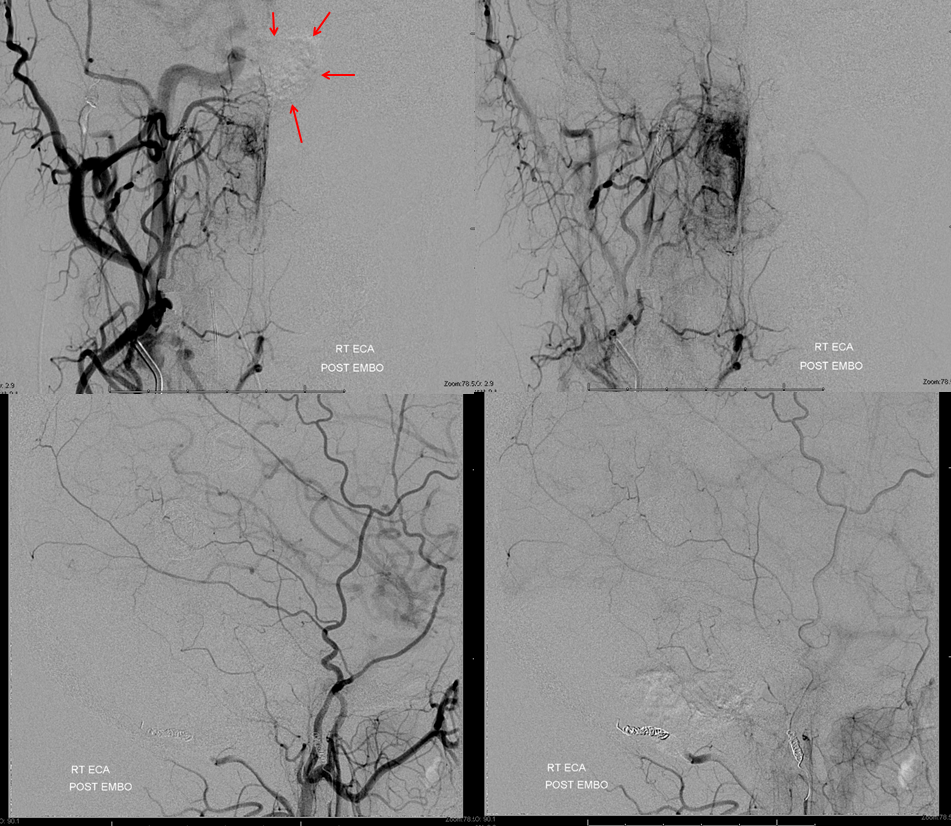 Think this is good?  Too early to celebrate.  Always we do control injections from other territories.  The vert: 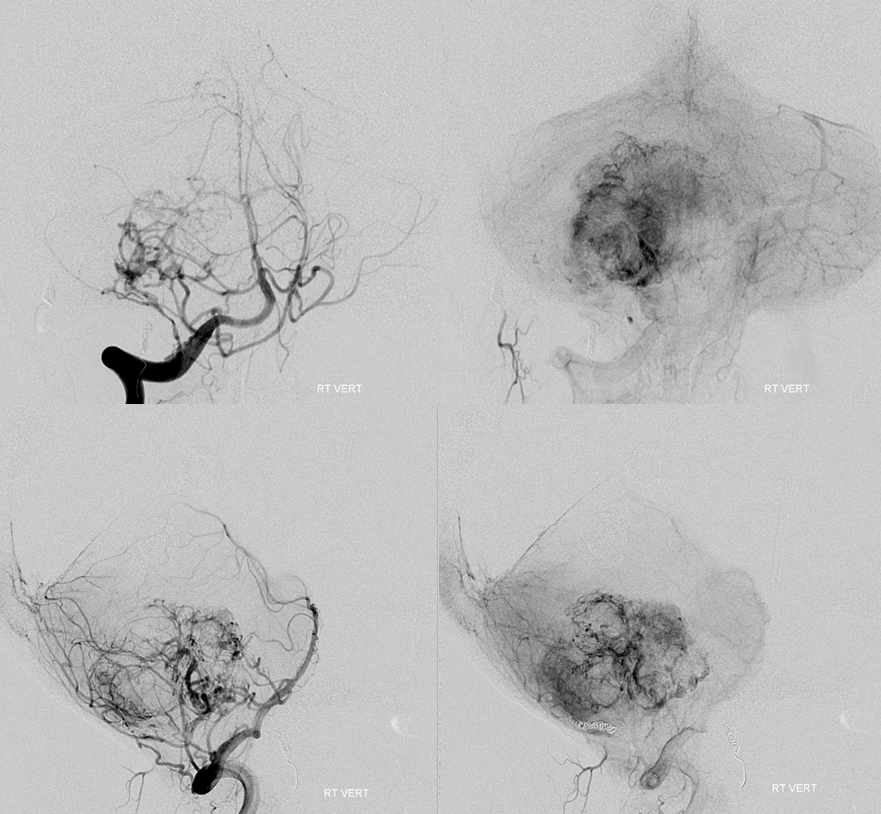 Now we go to the posterior meningeal.  This one took a bit of work to get into — they tend to come off parts of the vert that can be a challenge to catheterize. Eventually we get in about 3 mm deep — plenty enough.  Of course, we watch for reflux so we dont particalize the vertebrobasilar circulation.  But that’s easy — just don’t reflux.  It is more treacherous to be a in a branch which is not directly connected to the vert or ICA, and embolise it unknowingly through one of the “dangerous anastomoses” — which is the devil you may not know — than to reflux into the vert — which is the devil you know and will watch for. 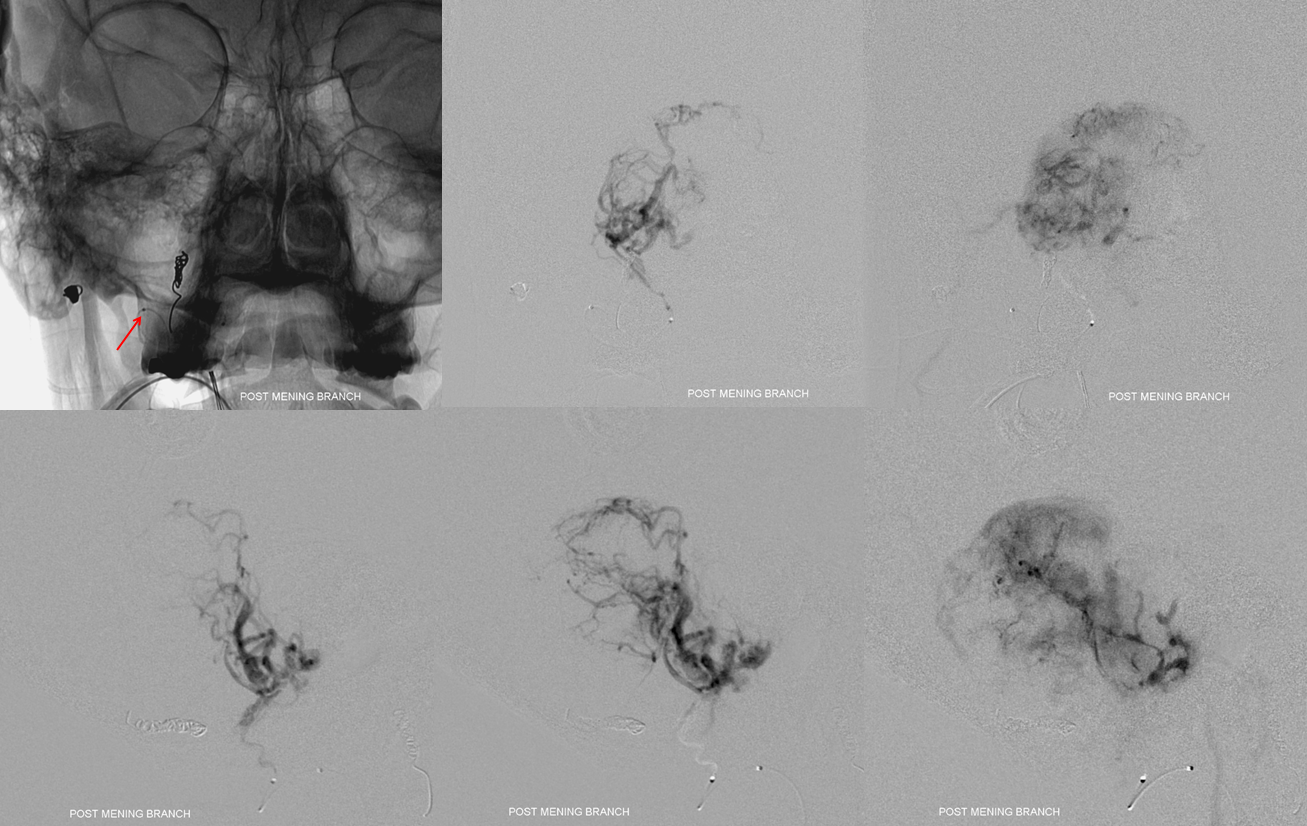 We emolized with small particles and closed with a few “nano” coils.

Here is the remaining vert supply. Pretty much all AICA.  The vermis is displaced a ton to the left.  We thought about this for awhile.  The furthest we could get out into the AICA for effective embo would be to the level of lateral brainstem.  We never saw the branch to the internal auditory canal and we could not be sure that we would be distal enough not to put particles into the dorsal pons and lower midbrain.  So after a lot of thinking we chose not to embolize the AICA.  In part, we did so because we work with a superb surgeon who we know can effectively address some residual bleeding.

It looks like a lot, but looks can be deceiving here.  Most of what you see is the pial outer shell of the tumor. The core is embolized. 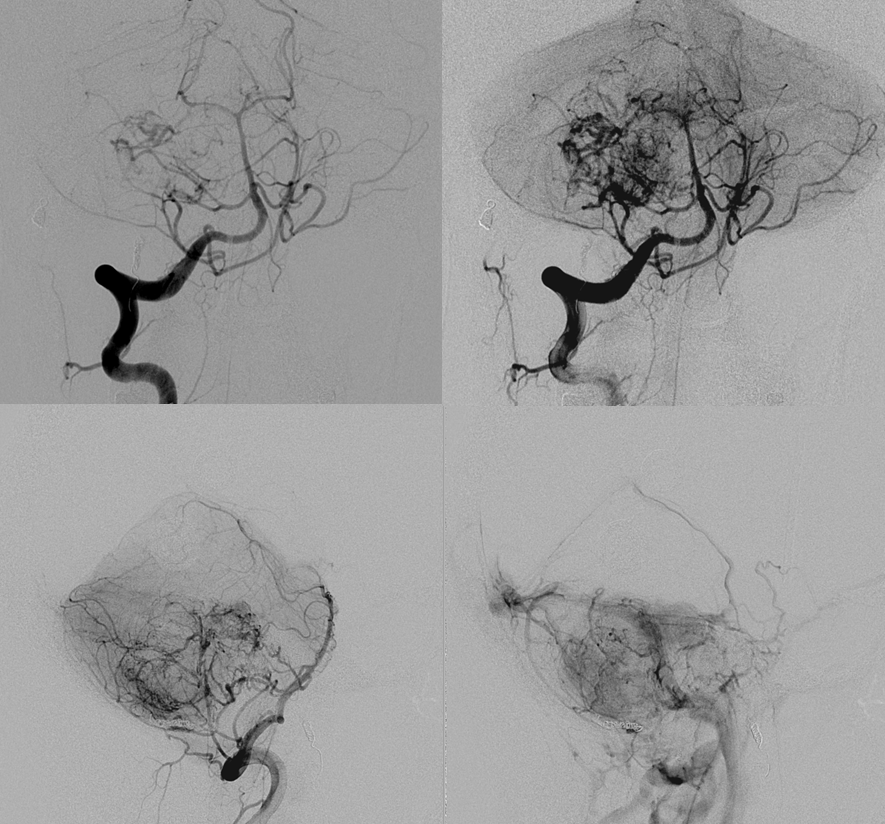 The surgery took all day, between ENT drillout of the temporal bone by Daniel Jethanamest, MD and tumor evacuation, and required 2 units of blood.  The purpose of the embo is not so save a unit of blood or two — it is to make the surgery possible and strike an overall balance between safety and efficacy for the embo and resection as a whole.  It was as difficult a surgery as an emboliztion but, in the end, the result is an amazing gross total resection with no new neurologic deficit either at the end of embo or after resection.  The facial nerve is fully intact also.  The sigmoid sinus was isolated and preserved as well. 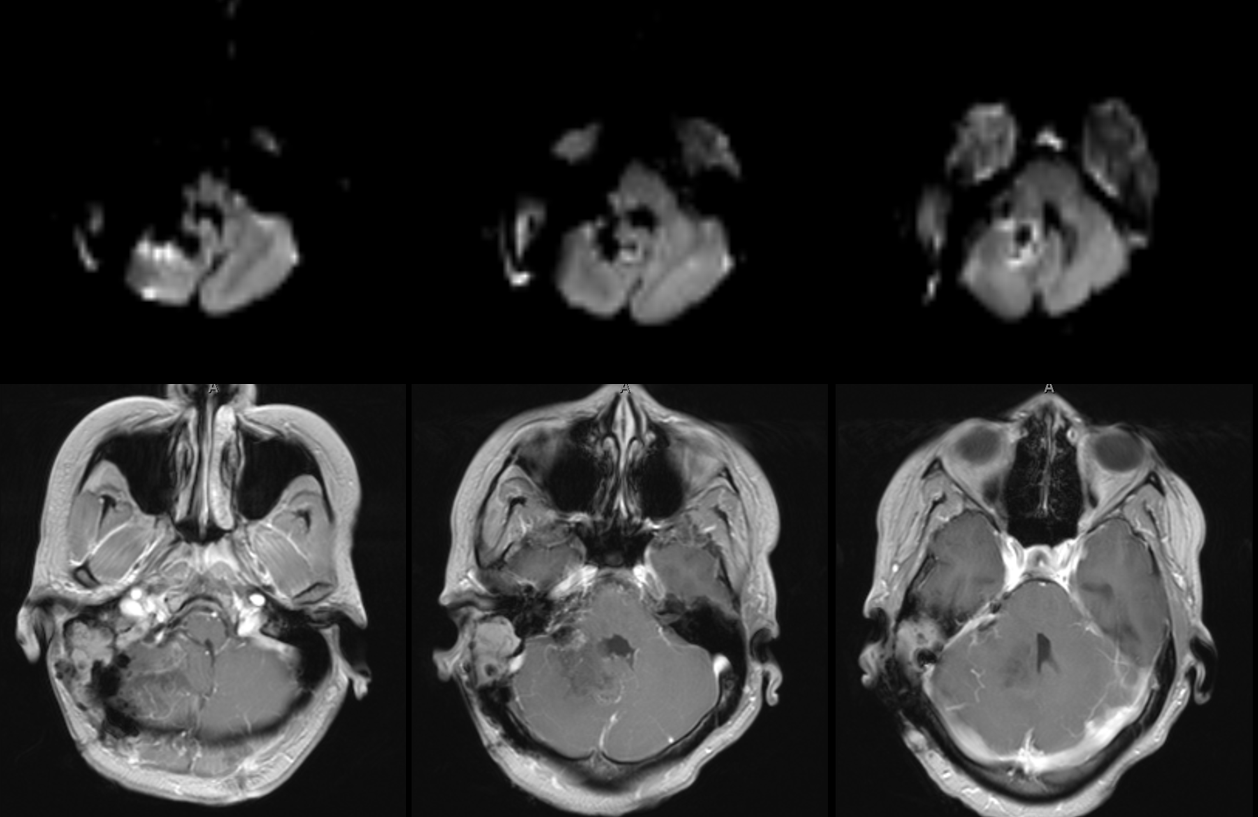 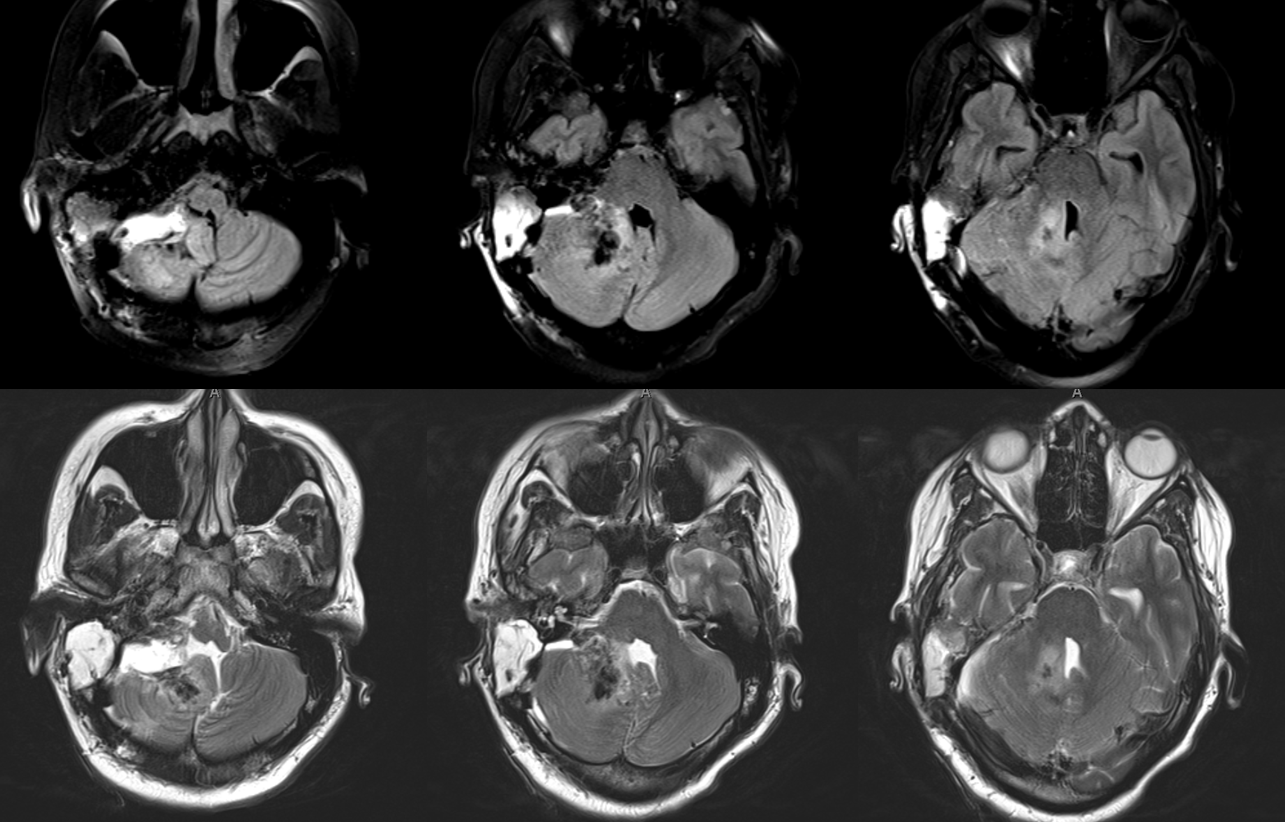 Pretty awesome resection by the renowned Chandra Sen, MD.  They certainly don’t turn out like this every time, but according to what limited date we have on anaplastic hemangiopericyoma (WHO III in this case, final pathology), gross total resection is the only factor which appears to positively affect survival https://www.ncbi.nlm.nih.gov/pubmed/20367074