As for all dural fistulas, the goal is to plug up the hole between the artery and the vein.  This can be done from either arterial or venous side. Most operators will agree that venous methods tend to be less morbid, though overall hazards of cavernous fistula treatments are substantially higher than sigmoid ones, for example.

Access to the venous side of the cavernous sinus is most straightforward via the inferior petrosal sinus.  This channel can be occasionally traversed even when it is seemingly absent or, better, when it is known to have been open at some point and since then thrombosed — see the definitive manuscript on this approach by the Toronto Group.  Another route is via direct puncture or cutdown of the superior ophthalmic vein (we prefer cutdown).  Common transarterial approaches include the ascending clival branches of the neuromeningeal trunk of the ascending pharyngeal artery; the middle meningeal artery, foramen rotundum branch of the IMAX, or most rarely the meningohypophyseal / inferolateral trunks.  Because of the certain association between each of these vessels and corresponding cranial nerves, as well as their proximity to main intracranial arterial trunks such as the ICA, arterial embolization of cavernous fistulas carries a substantial degree of hazard and requires appropriate understanding of anatomy.

The following case illustrates some relevant factors in transarterial embolization. This patient presented with mild left proptosis, chemosis, and CN VI palsy.  Occular pressures were normal.  There was no bruit.  Fistula was suspected based on a CTA.  Injection of the right ICA shows a fistula in the posterior aspect of the left cavernous sinus (purple), supplied by posterior hypophyseal branches (red) of the right meningohypophyseal trunk (MHT).  The fistula drains primarily into the congested left superior ophthalmic vein (blue), and subsequently into the angular / facial veins. 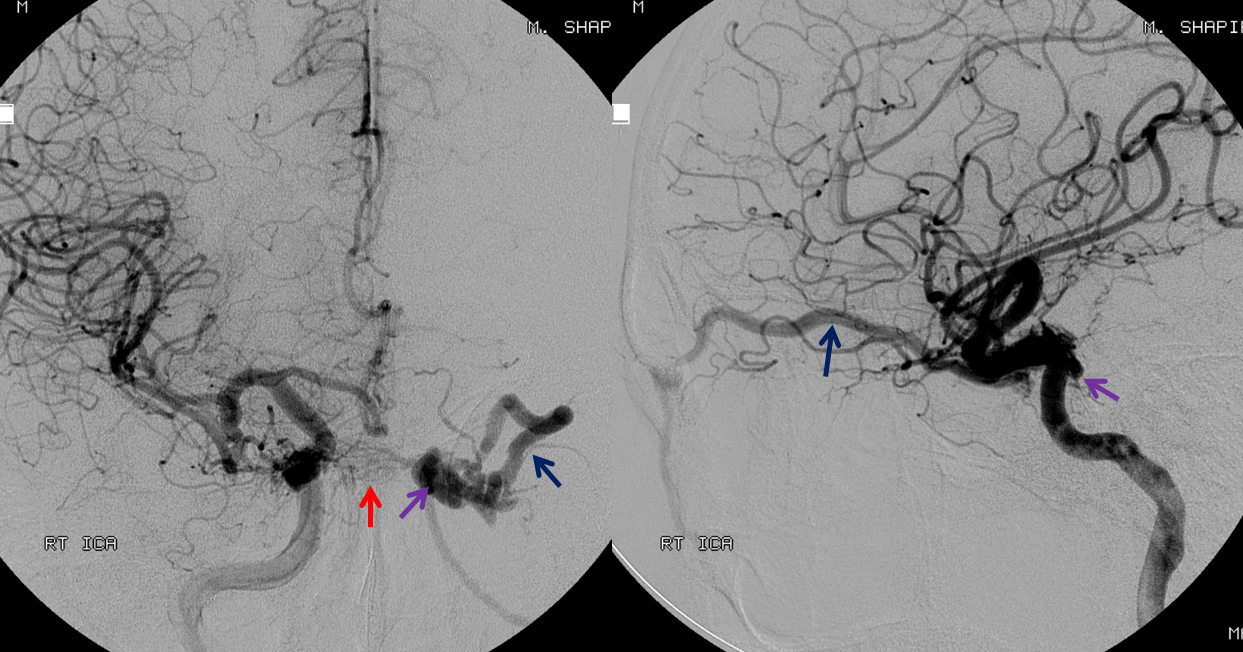 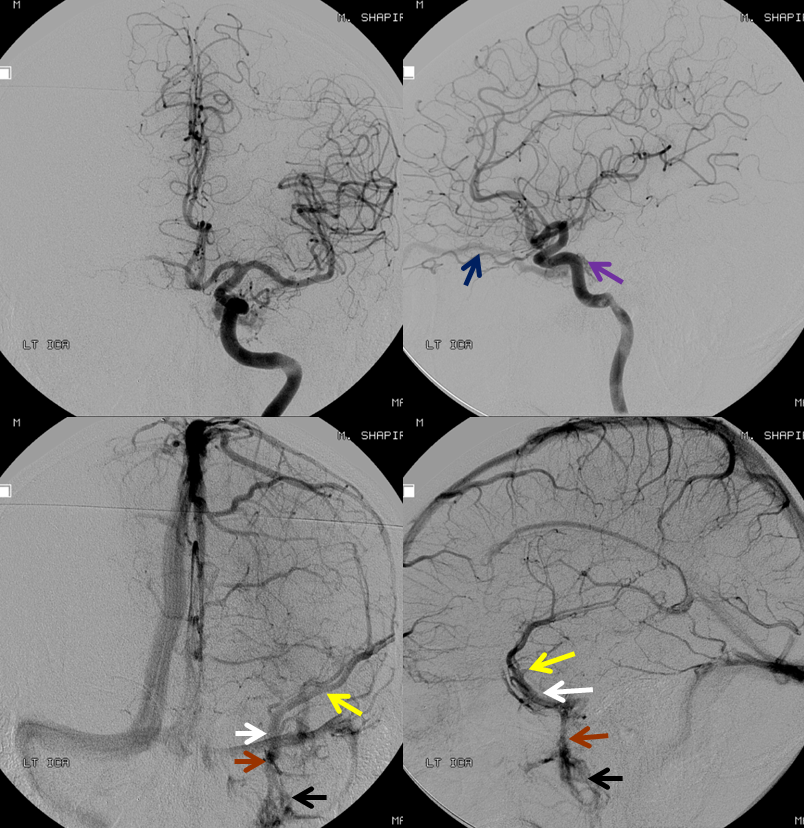 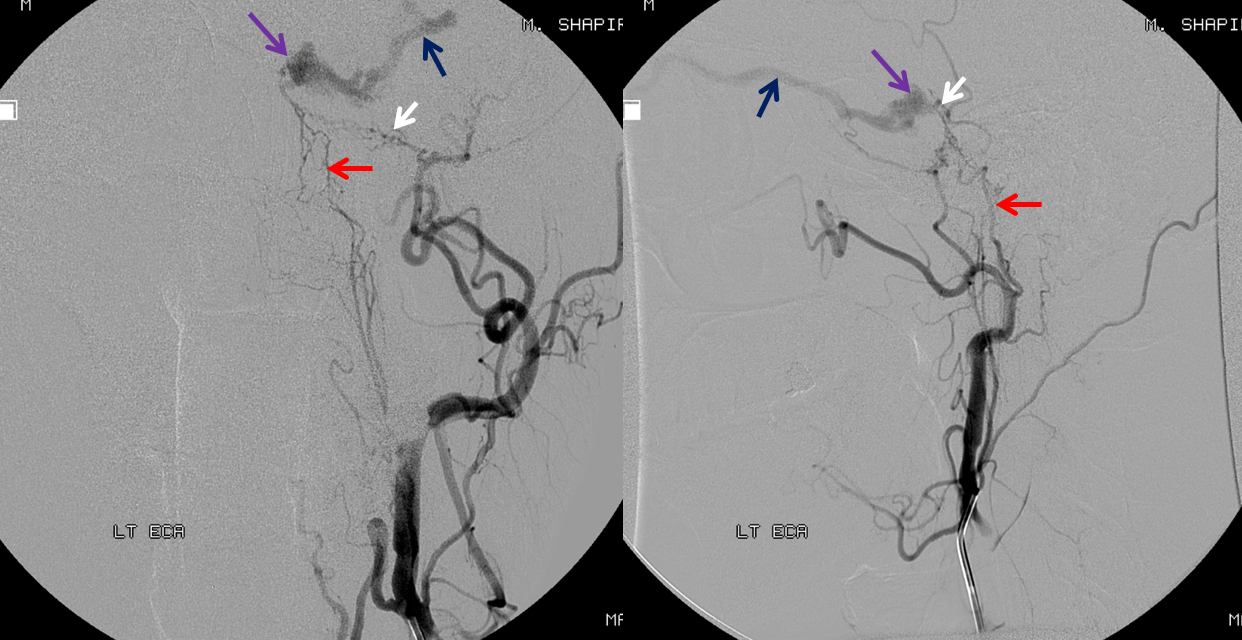 The patient originally declines treatment.  Two months later, he reports rapidly progressive worsening of chemosis and proptosis, with a new visual acuity deficit.  Examination reveals a left afferent pupillary defect, with acuity of 20/200 on the left and 20/40 on the right (previously 20/40 bilaterally).  Pre-embolization image: 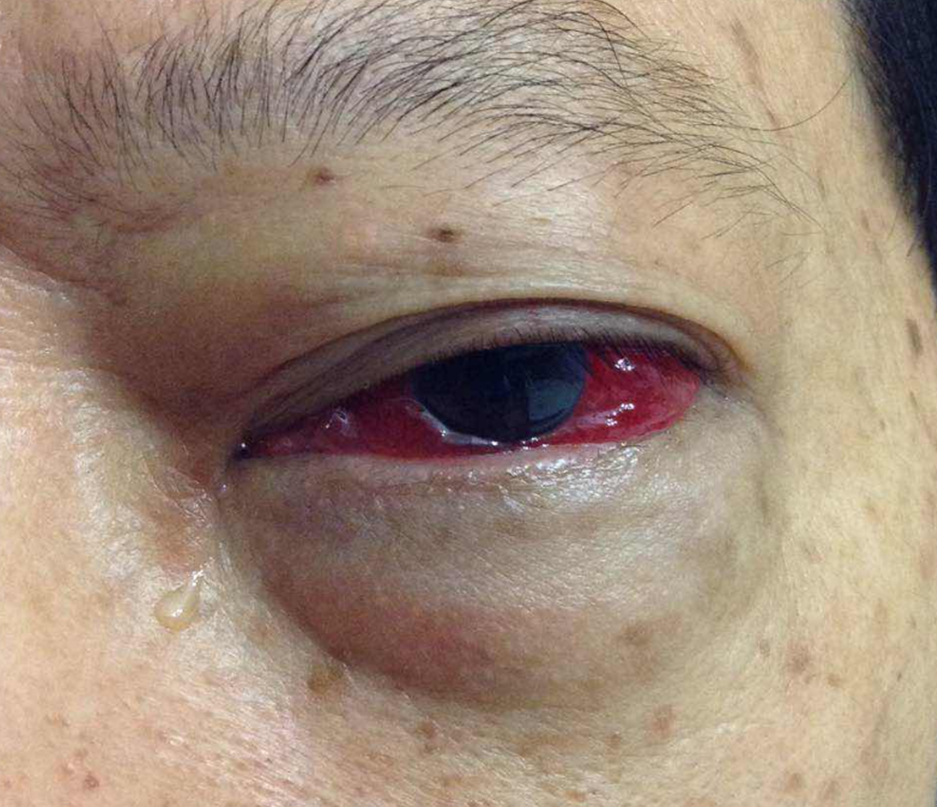 As usual, angiogram provides a complete explanation for the changes.  The left superior ophthalmic vein — the main outflow channel — is now closed.  There is no effective alternative outflow, with secondary marked intra-cavernous (orange) and intra-orbital (black) congestion.  Progressive thrombosis has minimized contribution of the left MHT to the fistula. The lateral images are now oriented to the right. 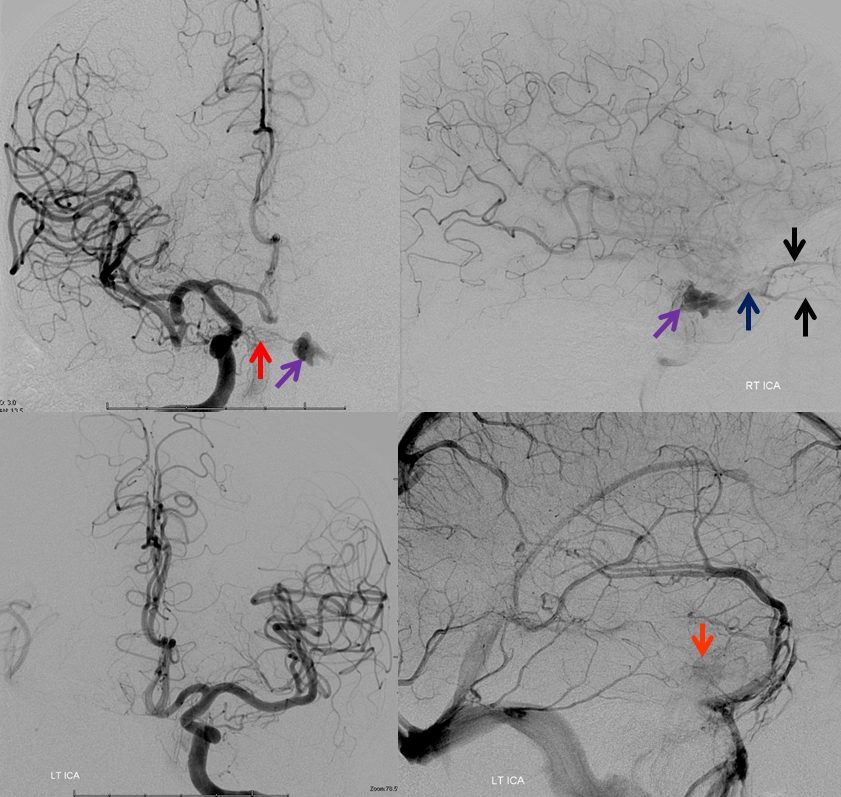 Same for the left ascending pharyngeal.  This accelerated thrombosis phase can occasionally cure a fistula, though in this case on balance the thrombosis has been more harmful 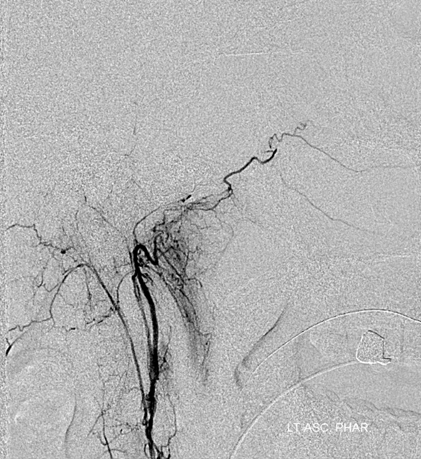 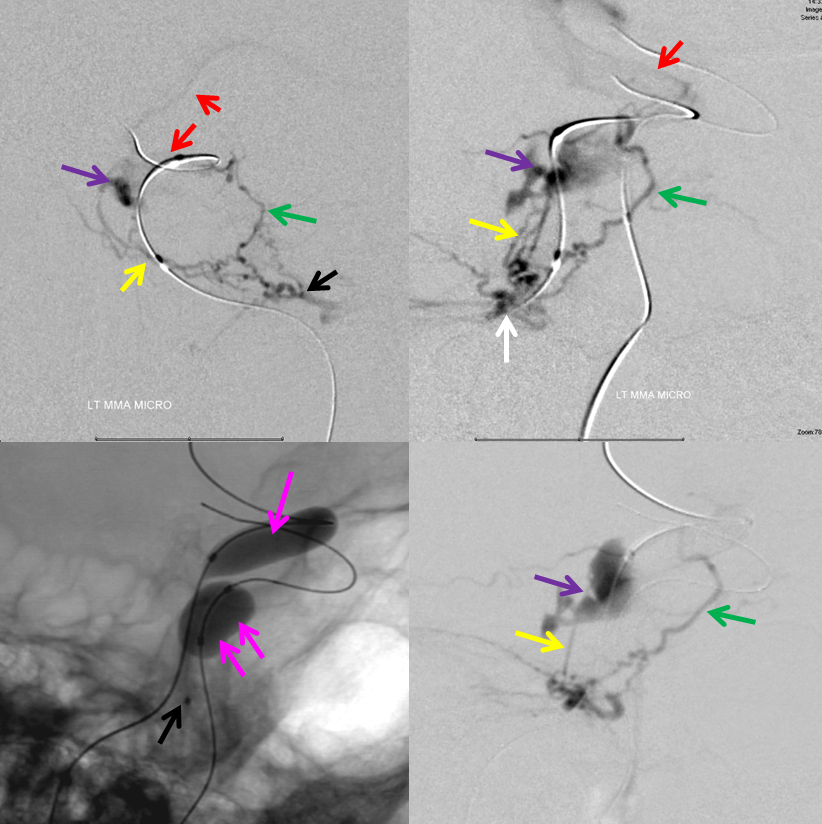 Another rendering of the nBCA injection

Question — what is the problem with the above injection? See below for answer.  Also check out Middle Meningeal Artery Page

Post nBCA injection, the fistula is still alive, via the right MHT

Our initial MMA approach was dictated by usual difficulties with sufficiently distal MHT catheterization to allow for a reasonable glue shot.  In this case, such a catheterization was in fact fortuitously possible, as shown in this movie:

Microcatheter MHT injection shows multiple posterior clival branches (red) coalescing towards the single arterial feeder into the fistula. Notice multiple filling defects (black) within the superior ophthalmic vein (dark blue), consistent with intra-venous thrombi.  There is congestion of the lateral rectus (yellow, lateral based on AP which is not shown) 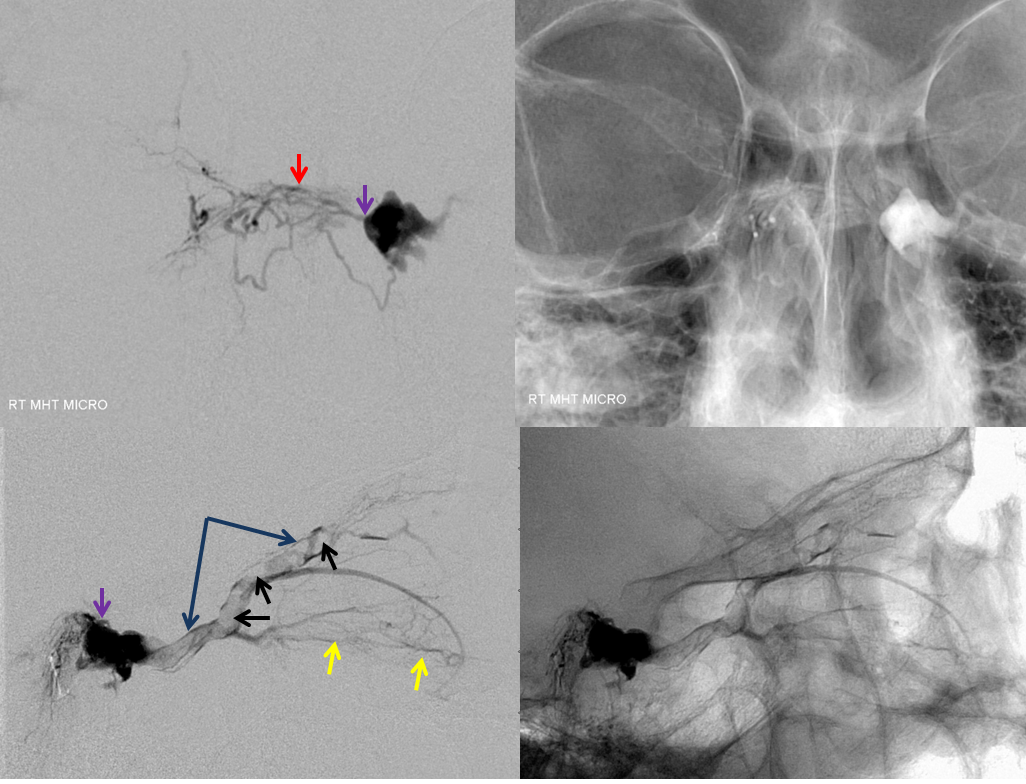 A beautiful stereo of the same

Another rendering of nBCA injection

Post-nBCA injection, the fistula is gone 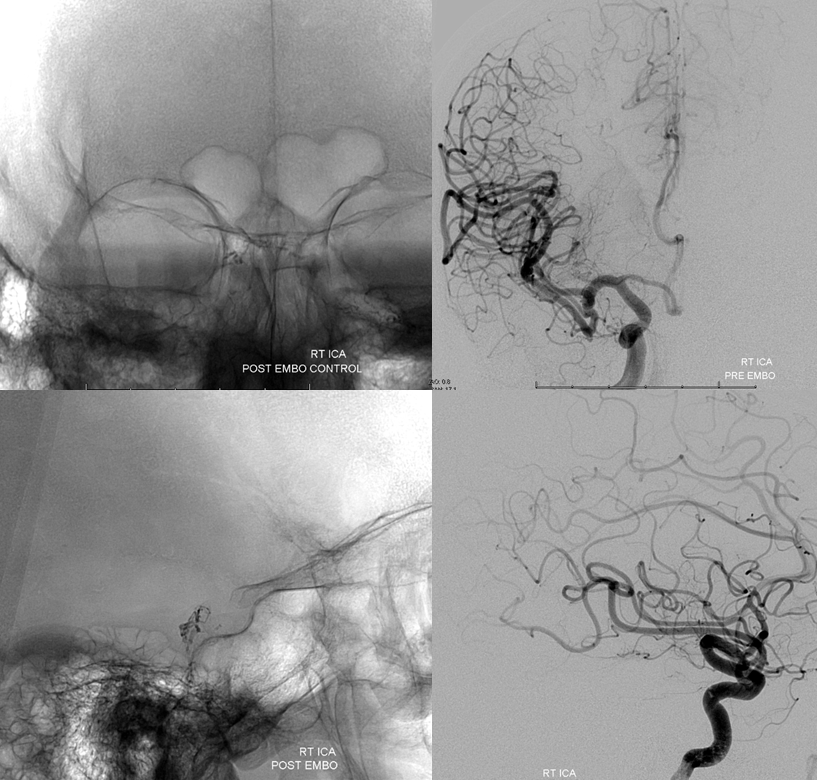 What was the problem with this case? The first injection was done from a too proximal location, with nBCA penetrating the petrous branch.  The patient woke up with a facial nerve palsy and ultimately made only partial recovery.  See MMA page for more info