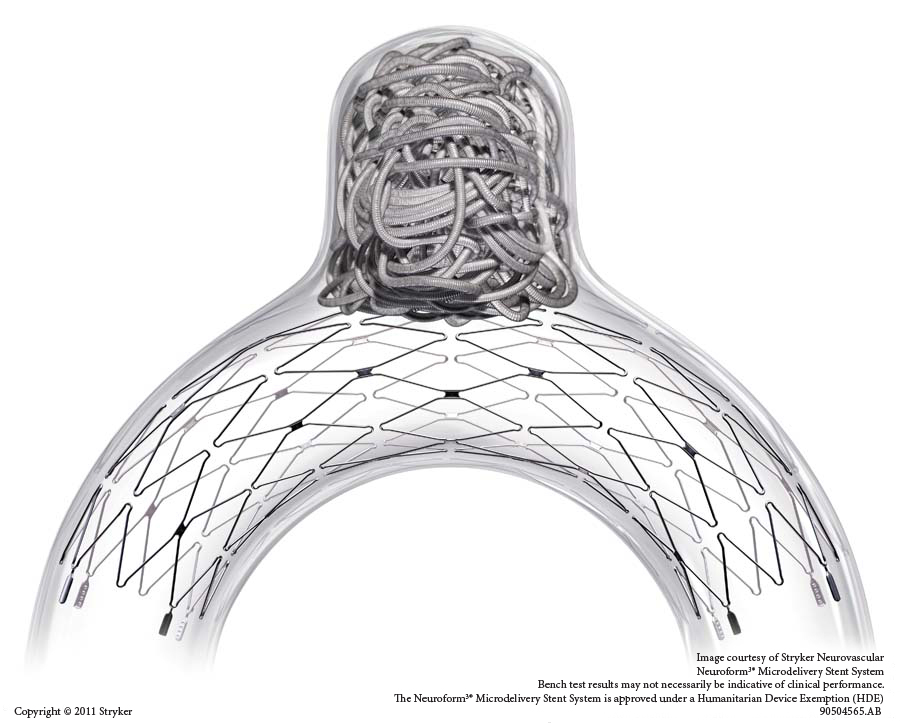 Why waste time putting together yet another stent-coiling case?  It is not the mission of neuroangio.org to showcase the usual.  Yet, as time went by after this case, I felt more certain that part of our mission as endovascular practitioners is to document the evolution in our field.  And evolution is certainly something near and dear to neuroangio.org  So, I feel that I need to record what may well be the waning days of the early great advance in our beloved field — the development of first dedicated intracranial stent — the Neuroform (pictured above).  A self-expanding nitinol stent, developed among others by the great Peter Kim Nelson (my chief and still later co-developer of the still more revolutionary Pipeline embolization device), the Neuroform played a key role in expanding the range of aneurysms which could be treated by endovascular mean, ushering in the era of stent-assisted coiling. Serial improvements in the delivery system of the Neuroform, with the latest Neuroform EZ, have truly made deployment of the Neuroform as easy as could be achievable.  Unfortunately, easy and forgiving is not the same as correct, and more than a few oversized, stretched Neuroforms are still permanently stuck in there, along with recurrent, incompletely treated aneurysms they were meant to vanquish, with suboptimal neuroform deployment complicating efforts to durably treat these aneurysms with the Pipeline.  Despite its promise, stent-assisted coiling particularly for large aneurysms, remained plaqued by recurrence, which is in part responsible the tremendous success of the Pipeline.  Yet, smaller, wide-necked aneurysms are more amenable to cure, and this is where the Neuroform, appropriately used, really shines.  As I write this, the next generation, the Neuroform Atlas stent, is now poised to enter the US market.  Unlike the prior improvements in the Neuroform which mainly concerned the delivery system, the Atlas is a completely different stent, also a laser-cut and nitinol, but delivered via a much smaller 017 catheter system compared with the Neuroform’s requirement for a larger 027, and incorporating many other engineering advances.  This has made easy even easier, and the use of Atlas elsewhere in the world has markedly diminished the share of the classic Neuroform EZ.  Even prior to this, we have advocated use of the Pipeline instead of Neuroform or other stent systems in cases were coiling was felt to be important, as the Pipeline is a much better “stent” as well, with no chance of coil prolapse into the Pipeline lumen and vastly superior conformability compared with any other intraluminal device on US market today. It is likely that the Neuroform EZ will continue to be available for some time.  And so, as we witness and welcome progress, the following case serves as a testament to the power of older yet safe and effective technology

So, here is a 4 mm basilar tip aneurysm 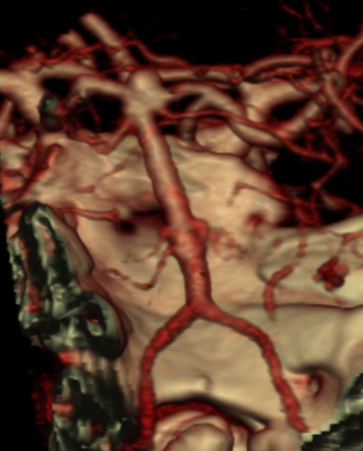 Any treatment starts with understanding of the circle of Willis.  Both PCOMs are present, larger on the right

Here is the aneurysm. Notice P1 segment perforators (white) and reflux into both PCOMS (black)

Working projections again show unusually prominent P1 perforators (white arrows).  Because of the neck configuration we decided to place the Neuroform into the right P1, but thought of and measured left also 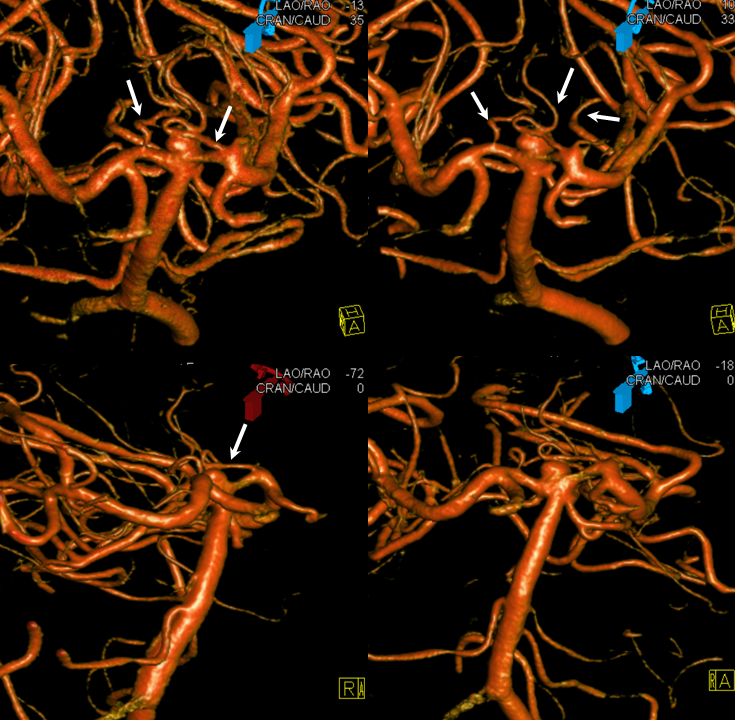 An XT-27 microcatheter was navigated into the right PCA via a Synchro-2 soft microguidewire.  It should be pointed out that part of the ease in Neuroform delivery comes from development of better 027 catheters.  The Marksman, and subsequent 027 catheters such as the XT-27, developed to enable better navigation and deployment of the Pipeline, are vastly superior to the real dinosaurs like the Renegade HI-FLO, and have by extension made the Neuroform a still friendlier choice. 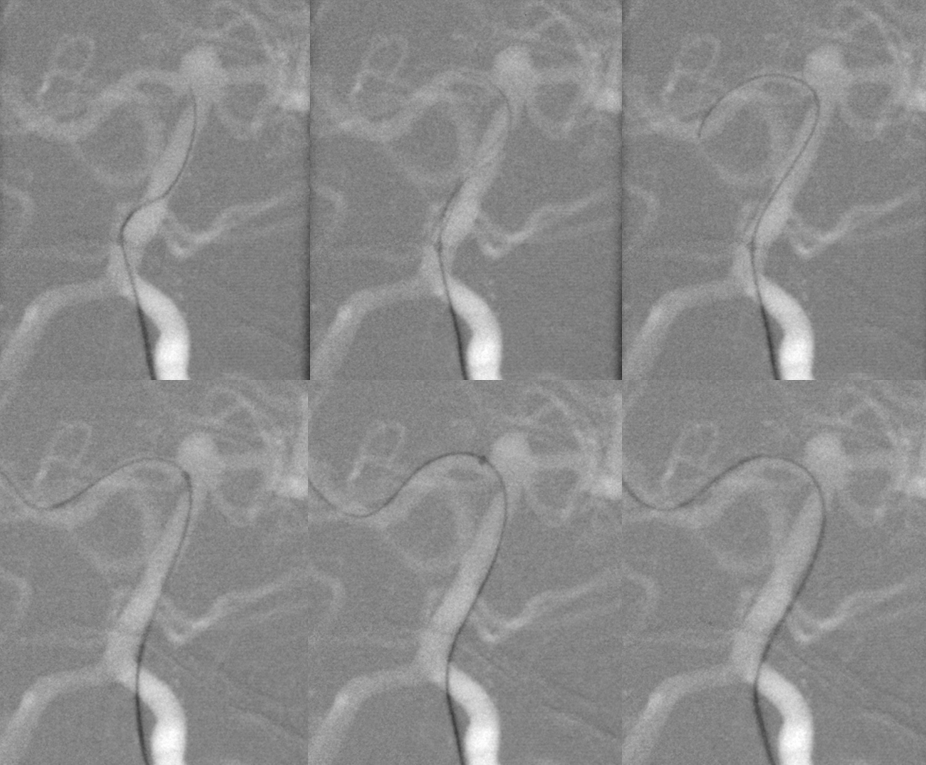 A 3×15 Neuroform EZ is deployed — it is critical to choose the right size.  Oversizing ALL laser-cut stents (including the incoming Atlas) will increase metal coverage (in contradistinction to the Pipeline, where oversizing decreases metal coverage).  Increased coverage in the basilar and P1 means greater chance of perforator occlusion.  It is also important to place the stent in such as way as to minimize the chance of one of its markers prolapsing into a perforator, as it sometimes likes to do.  For this reason, we deployed a bit distal to the right P1 thalamoperforator, thus also covering the PCOM. 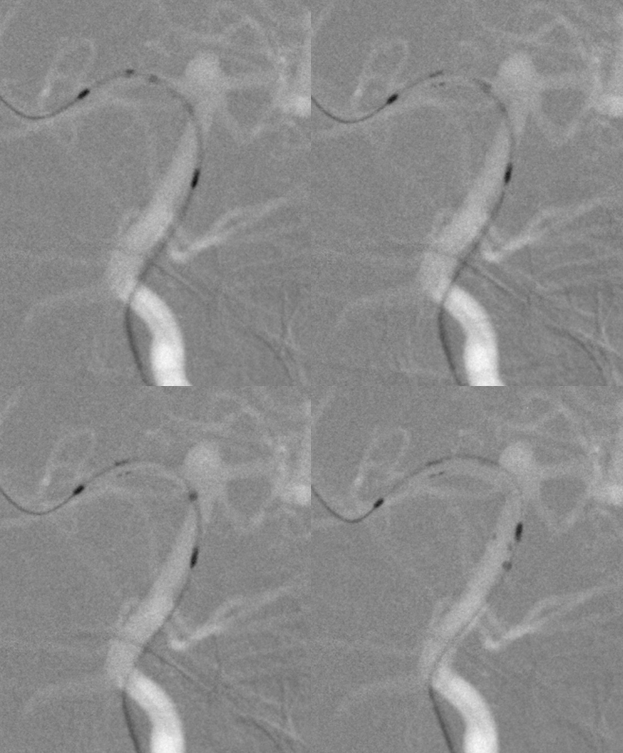 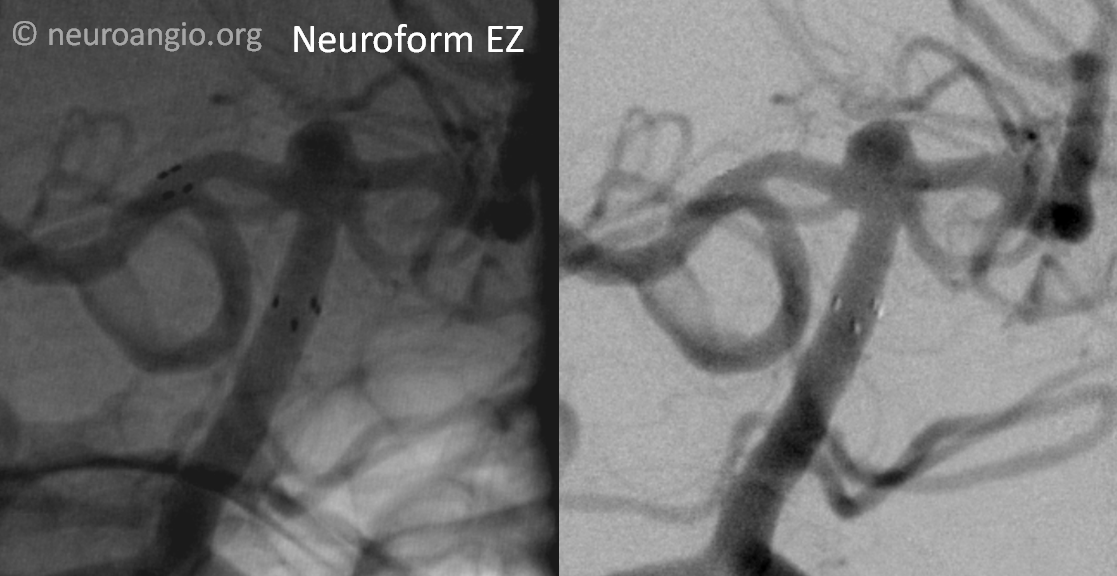 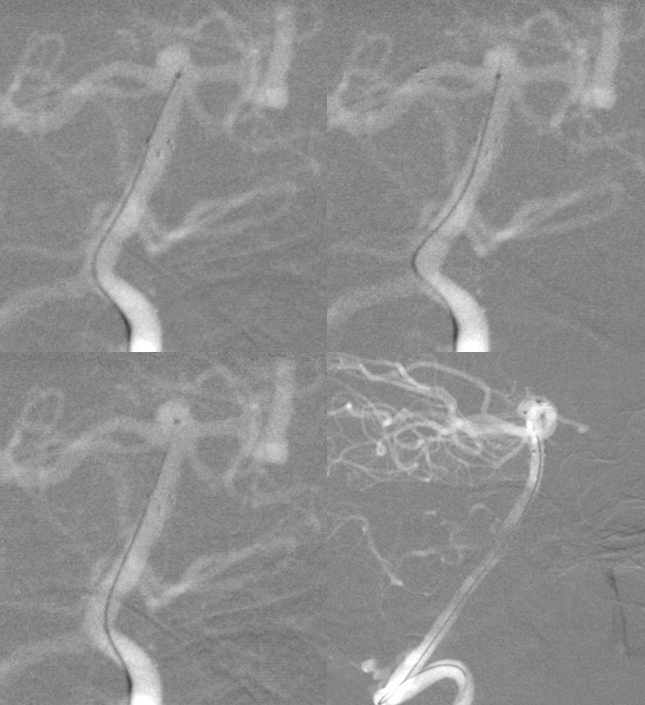 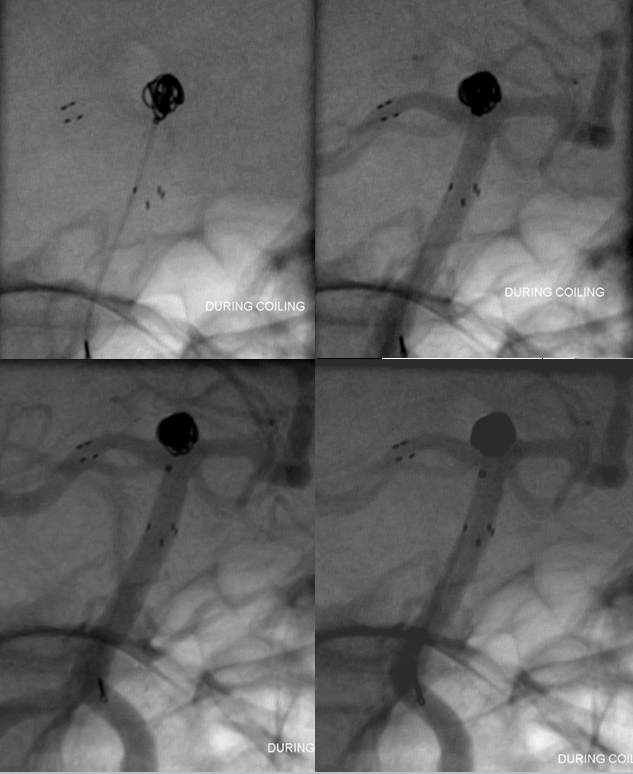 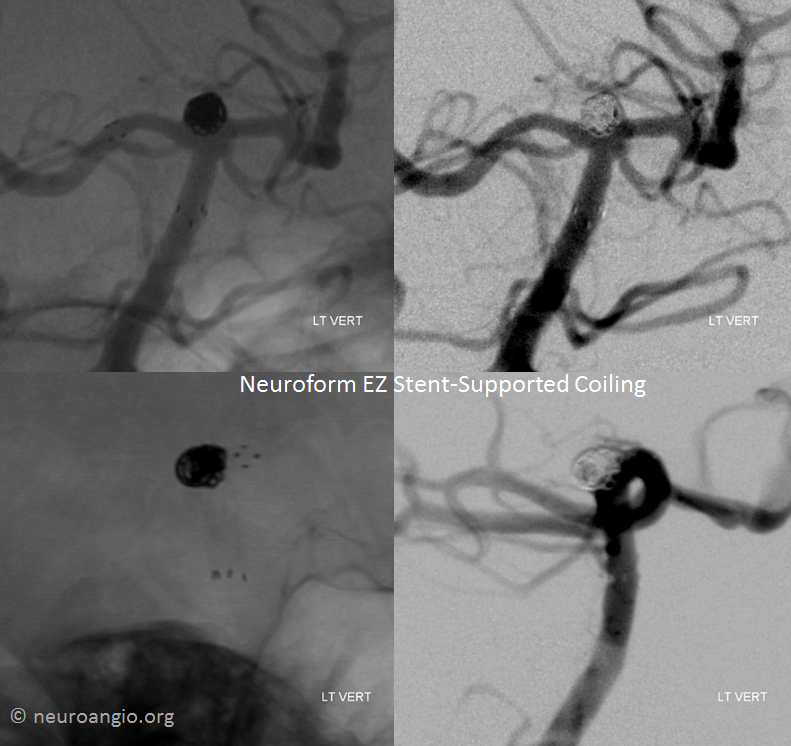 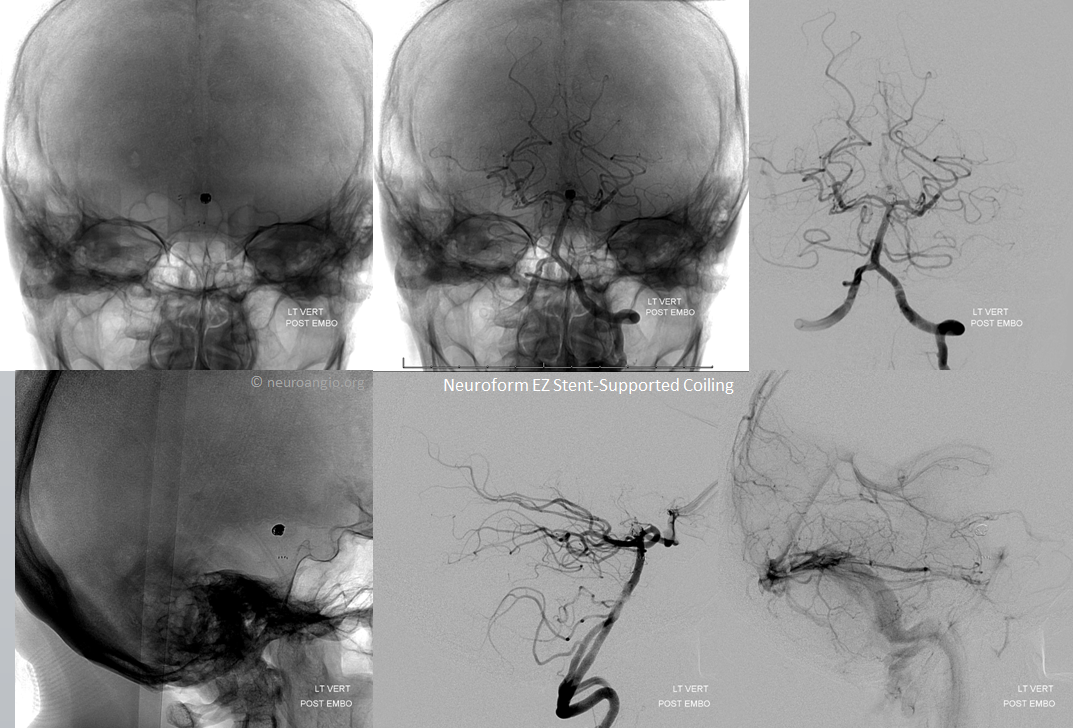 So, lets see what the Brave New World has in store for us.  And, although the role of Neuroform EZ may ultimately be marginal, stent-assisted coiling as a method is here to stay.  I cannot think of any other presently available endovascular tool, in US or elsewhere, that is capable of treating the above aneurysm as safely and effectively as stent-assisted coiling.  So, in this case, and in many others, EZ does it! 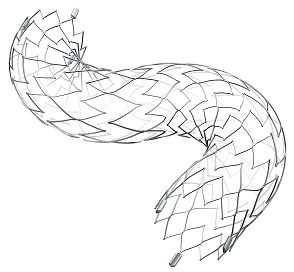