This is a classic case, encapsulating the principles of spinal dural fistula pathophysiology and goals of treatment

The simple explanation of what spinal dural fistula is (when something is understood it should always be simple) — a shunt between dural artery and dural vein in nerve root sleeve. The shunt, which is slow flow, drains retrogradely into spinal cord veins.  Congestion of cord veins produces all symptoms of the dural fistula.  The congestion is usually worst at the most dependent, bottom part of cord — hence the classic dural fistula symptoms.

Clinical progression is related to degree of venous congestion. This is dictated not by size of fistula, but by presence or absence of routes for the congested veins to empty. The veins empty via other radicular / bridging veins, traversing the dura, into the epidural venous plexus.  The less of these veins there are, the more symptoms.  These veins are limited in number, and probably close/thrombose over time when subjected to pathologic arterialized fistula flow.

Cord congestion can be seen by inability to visualize cord surface veins after injection of dominant anterior spinal artery supply.

The goal of treatment is to close the fistula which parasitizes the cord veins, and return these veins to the cord, so it can use them again.  Successful fistula treatment is often associated with immediate visualization of the same veins the fistula had appropriated in the venous phase of anterior spinal injection — the return of veins to the cord.  Because the cord venous system is usually damaged by the time fistula is discovered, due to lack of most radicular veins, even if the fistula is closed, the venous system of cord drainage usually remains abnormal and likely congested.  This is likely, in part, responsible for the often incomplete clinical recovery of the patient.  The other factor is, of course, permanent cord damage caused by venous congestion before the fistula is closed.  In reality, both are likely present to some degree, and the more severely affected patients, with the most likelihood of permanent damage, also tend to have the worst venous systems.

The case below illustrates many of the above points. 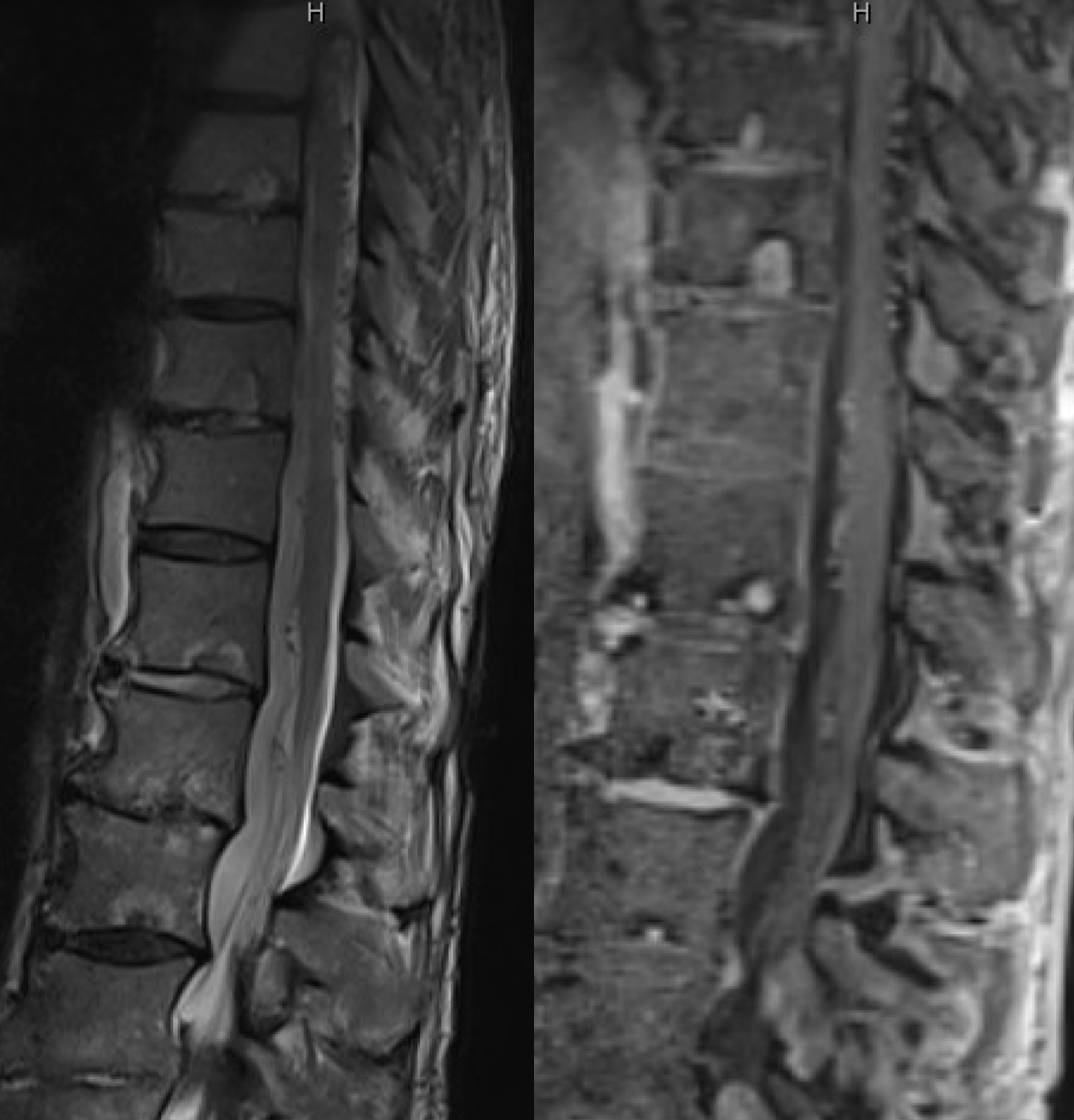 The MRI is typical of showing dilated cord surface veins, especially posteriorly (usually the thoracolumbar cord veins are more prominent posteriorly).  There is no cord edema though — it’s an early pickup.  This is somewhat unusual, but happens — here we had a high index of suspicion to do spinal angio.

Fistula was quickly located at left T6 level.  There is S-shaped scoliosis also 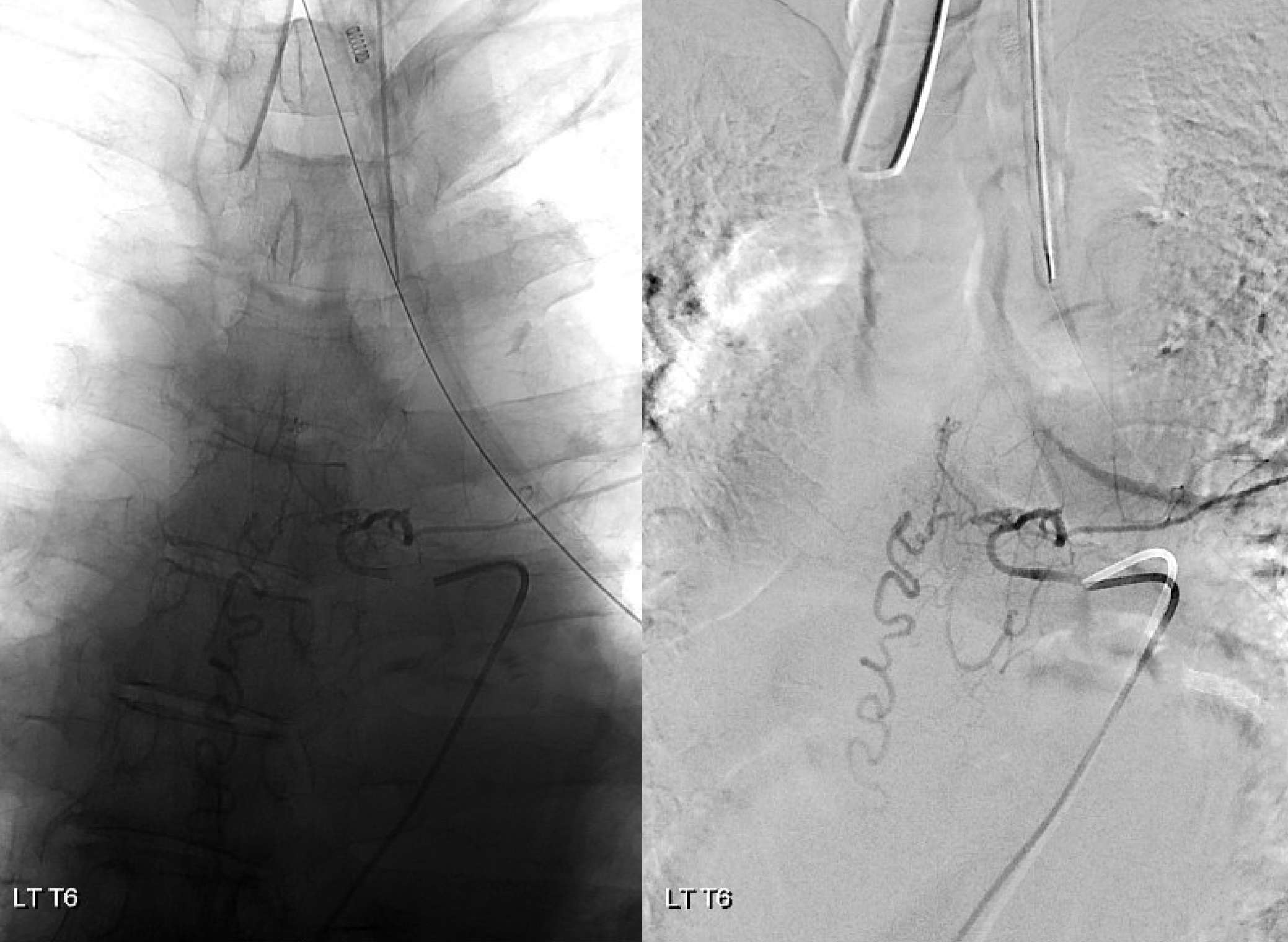 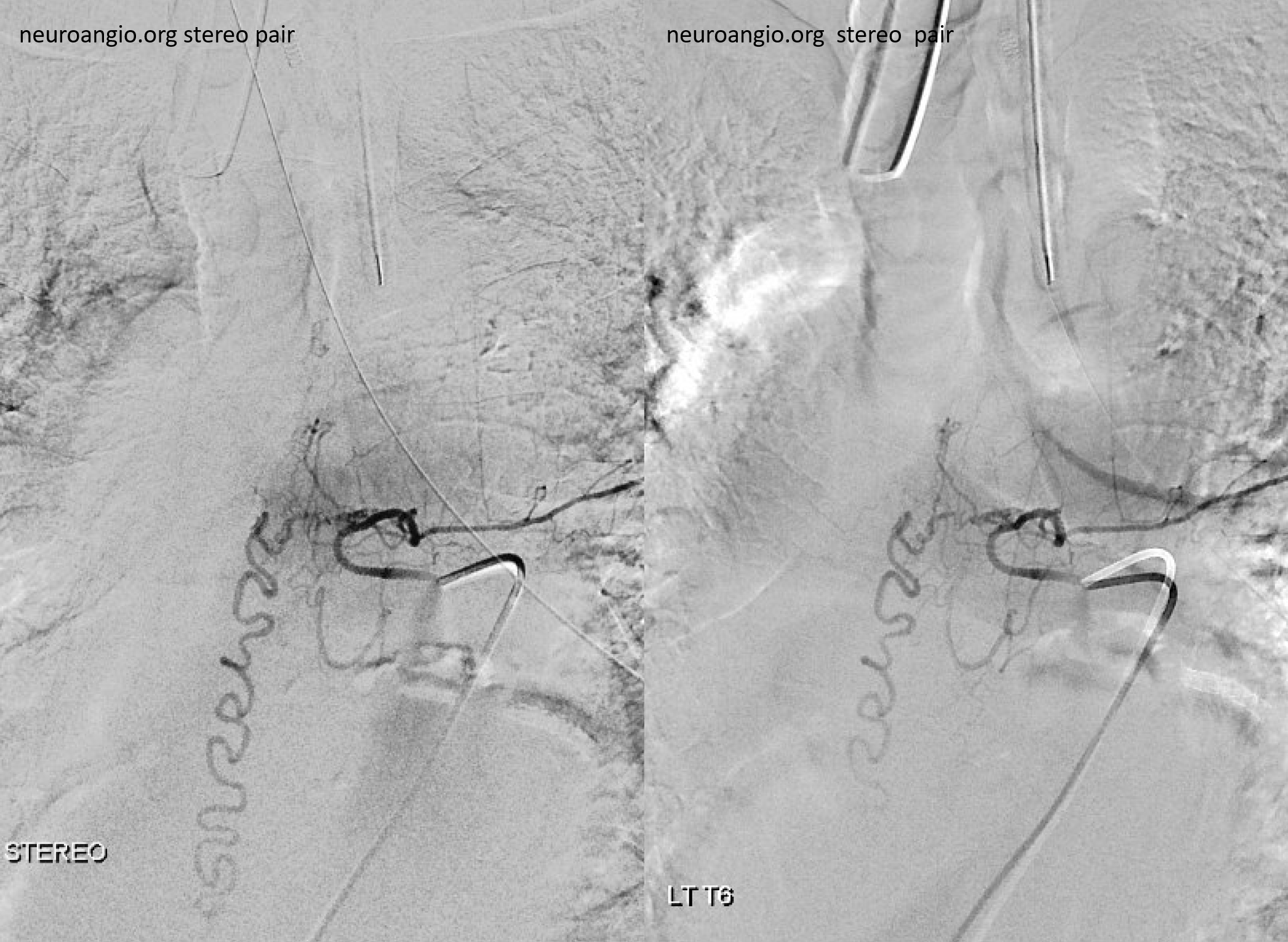 Follow the outflow to see where the parasitized spinal veins finally drain.  Its important to focus on venous drainage, not just the fistula.  See how there is no radicular drainage from T6 down to L5?  That’s a major problem. 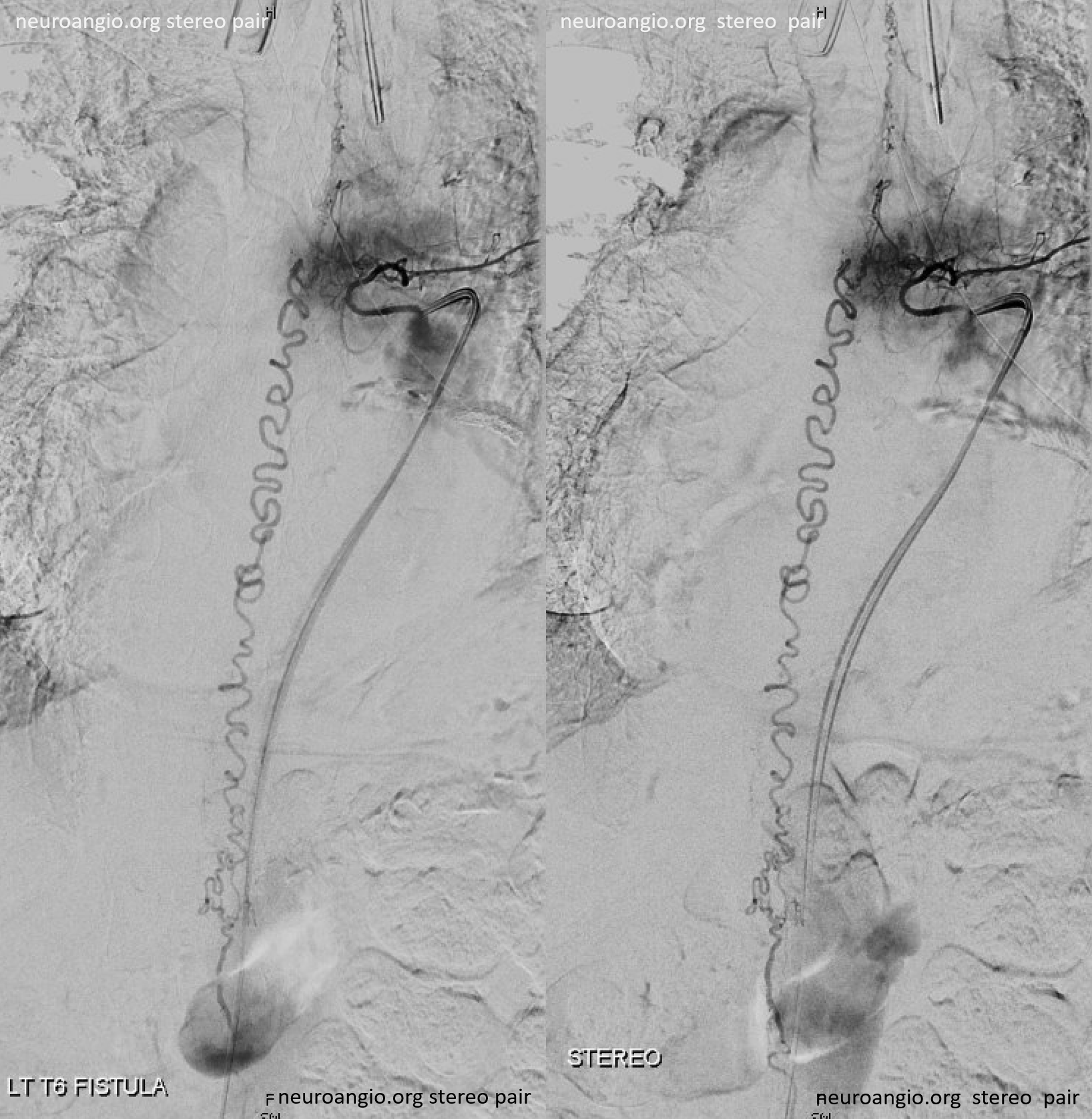 A single vein, likely filum terminale one, empties into the sacral venous plexus.  If this outflow goes down, there will be nothing left — with sudden and catastrophic clinical deterioration 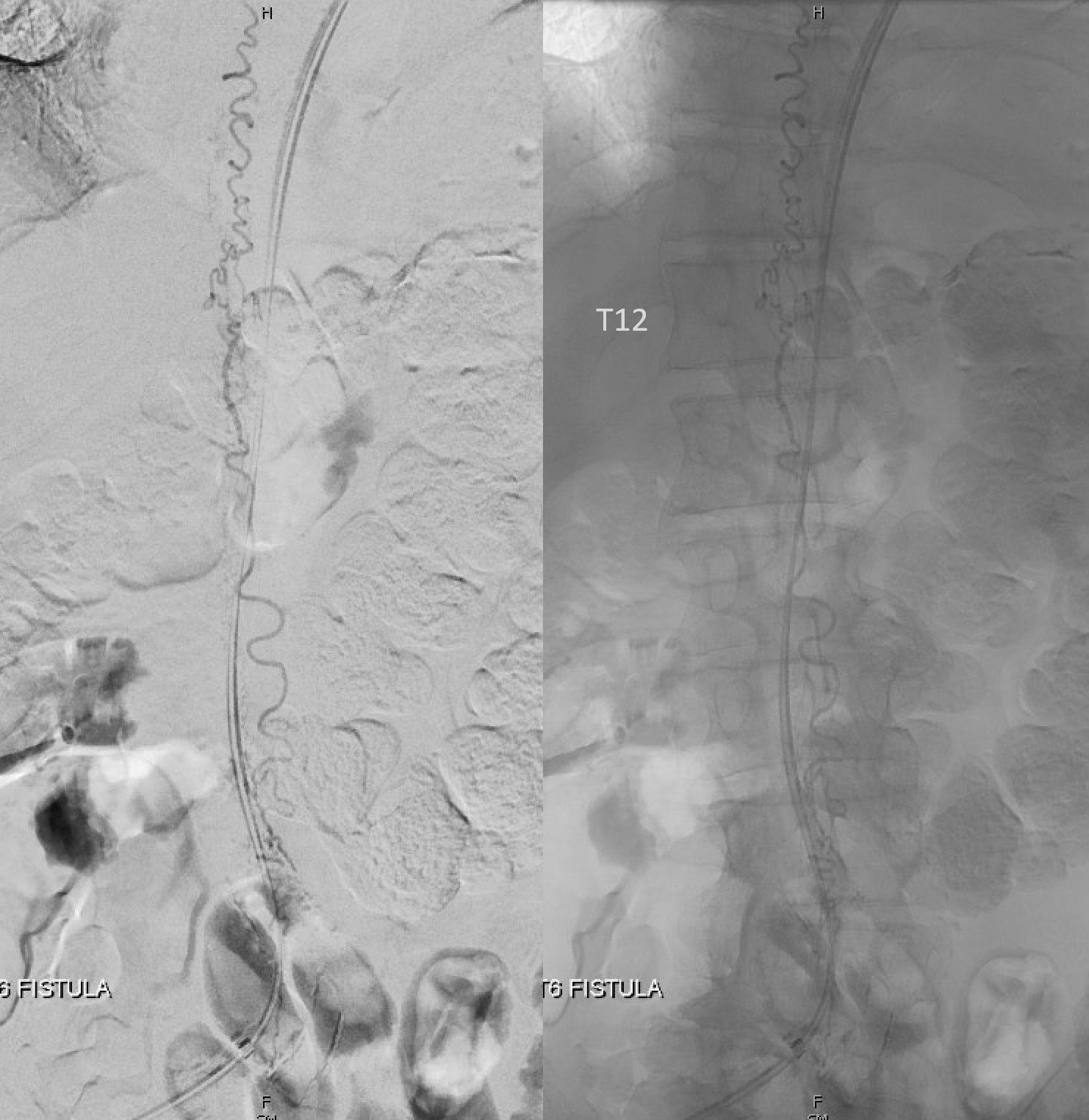 Back to the fistula.  Left T5 contributes to supply via the lateral dural branch (arrow).  It also shows nicely where the fistula point is (at the confluence of this branch and the major T6 supply) 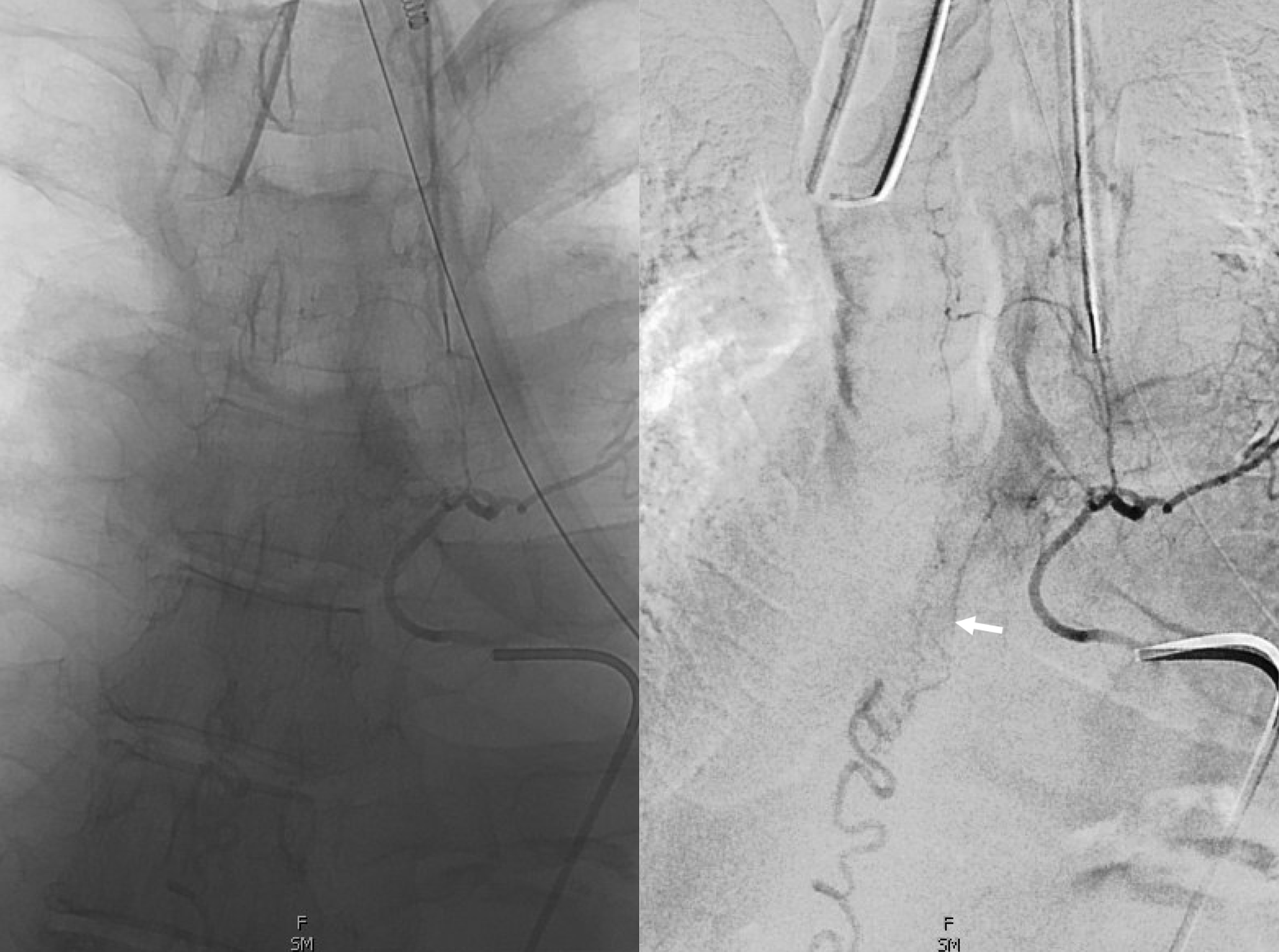 Cone beam CT — there is typically a network of small arteries in the nerve root sleeve (dashed arrows), just proximal to the fistula.  The hallmark is a SINGLE draining vein (radicular vein) with a typical horizontal course along the nerve root (arrow).  This is the target vein to be closed.  Either by surgery or embolization — in latter the embolic material must reach this “foot” of vein.  It is also important that the embolic not penetrate into the longitudinal cord surface veins (posterior in this case — see lateral image).  The more these veins are preserved the better — since we want the cord to use them again.  Also, embolic penetration increases  the risk of thrombosis in these veins, which can be catastrophic. 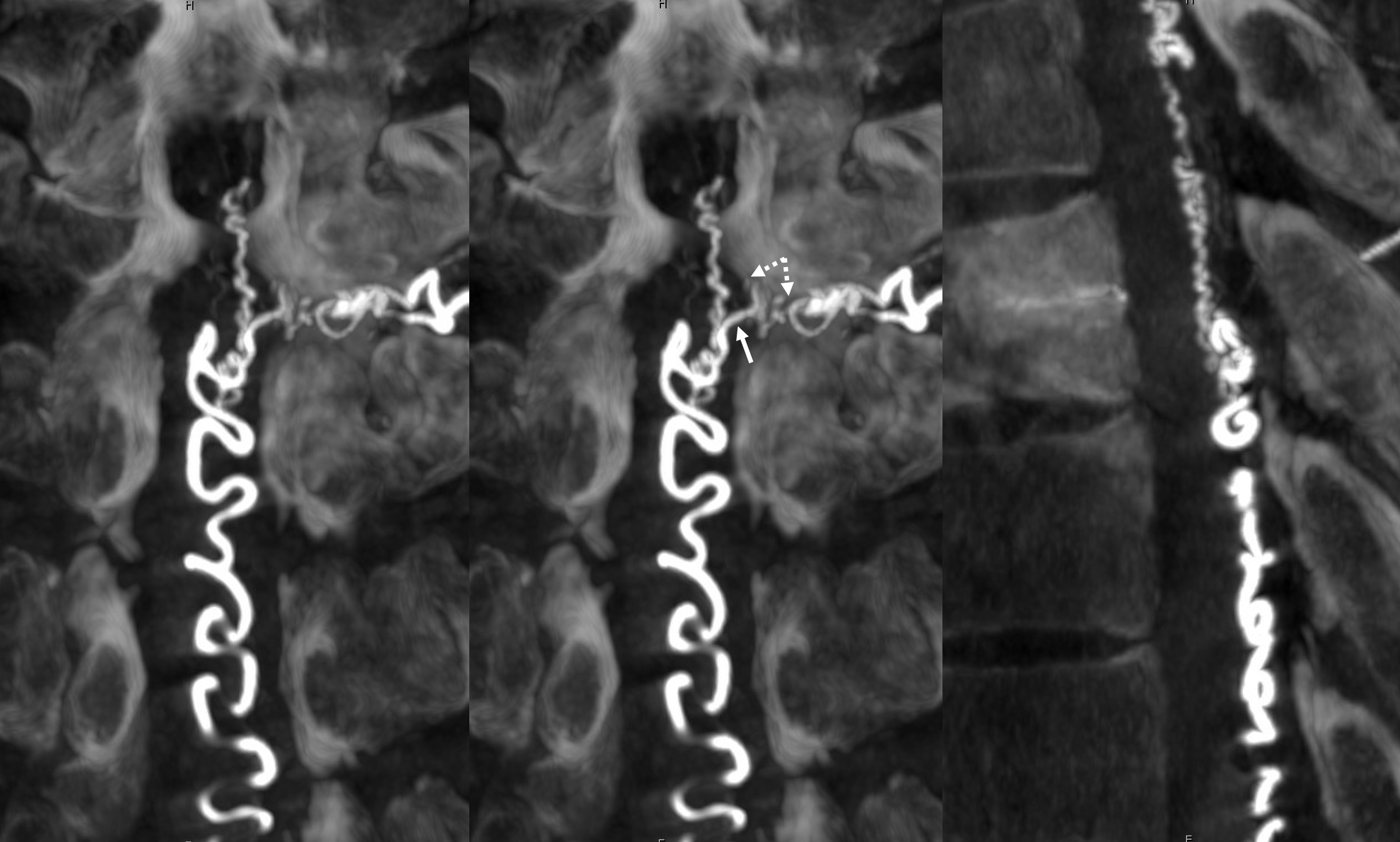 Notice that late venous phase image (right) does not show cord venous drainage.  This is due to venous congestion created by the fistula. There are a number of very faint vessels present along the cauda equina — can you see them? Those are probably congested veins.  Normally, several easily identifiable cord draining veins are present 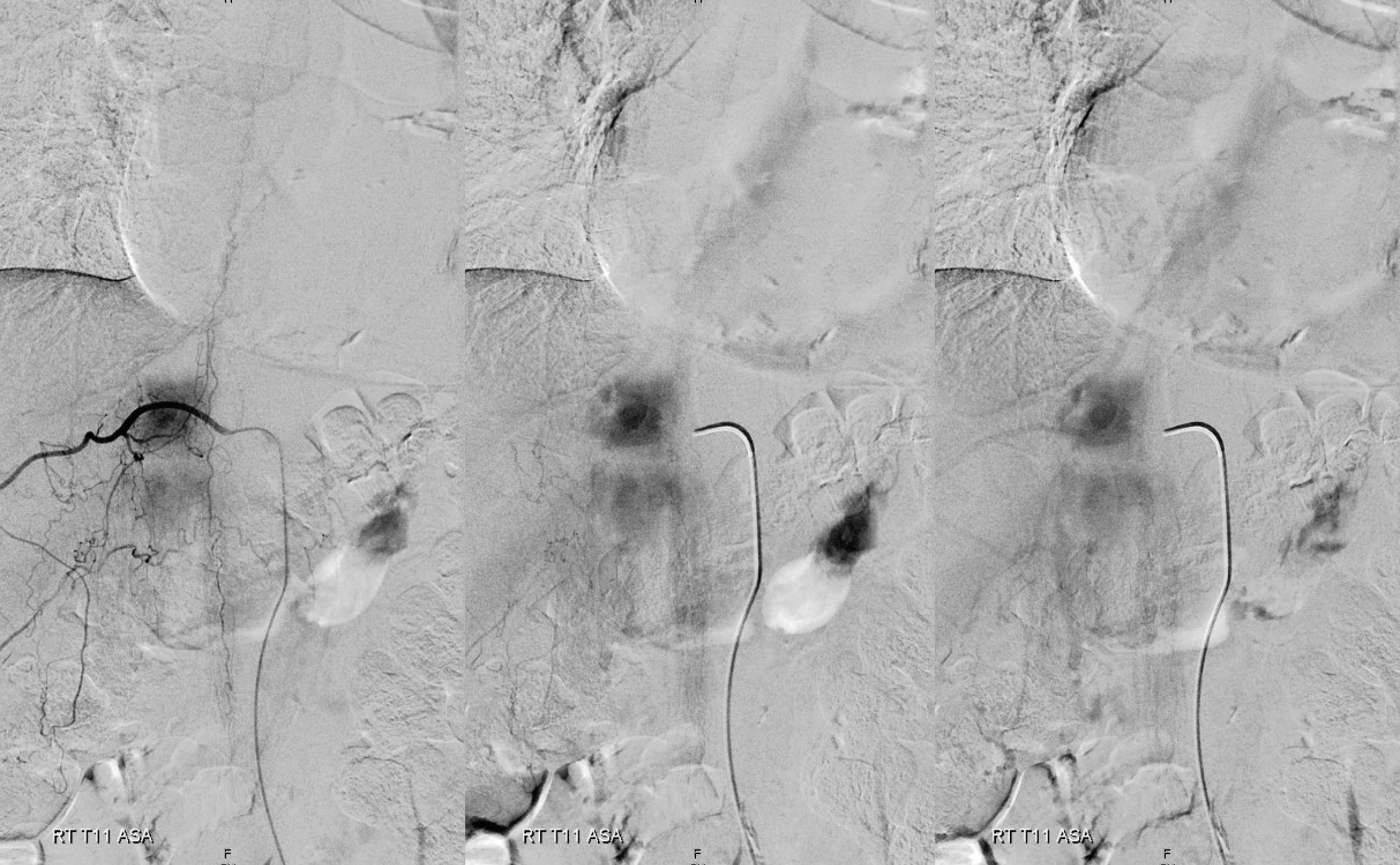 Below is an example of a different, normal case, from Spinal Arterial Anatomy page.  The draining veins are easily seen on the right image 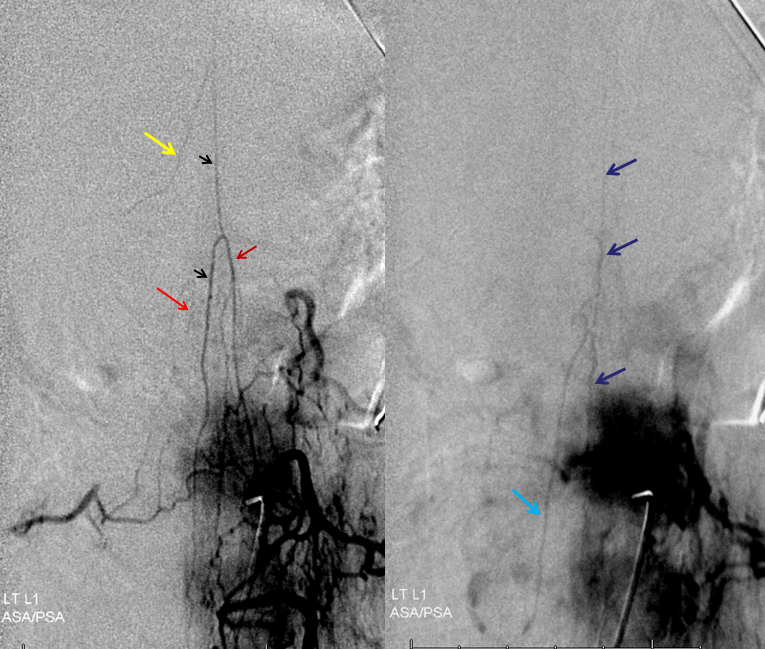 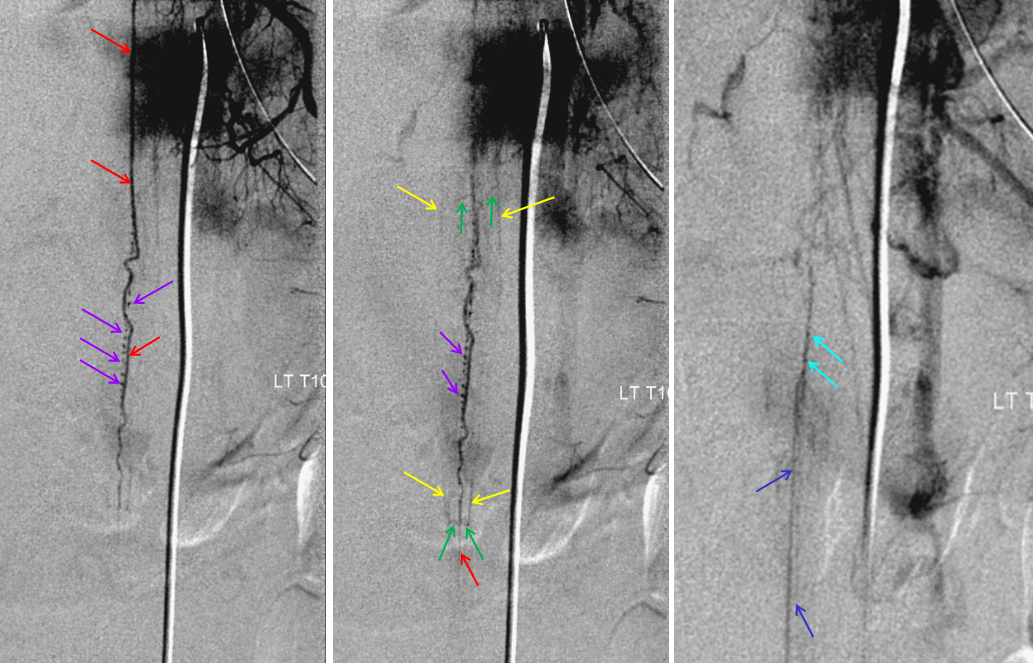 Now back to our patient

Cone beam MIP reconstructions.  Incredible detail.  The structures are likely all arterial.  See the “basket” at the bottom of the conus, the posterior spinal network, and the sulco-comissiral arteries? 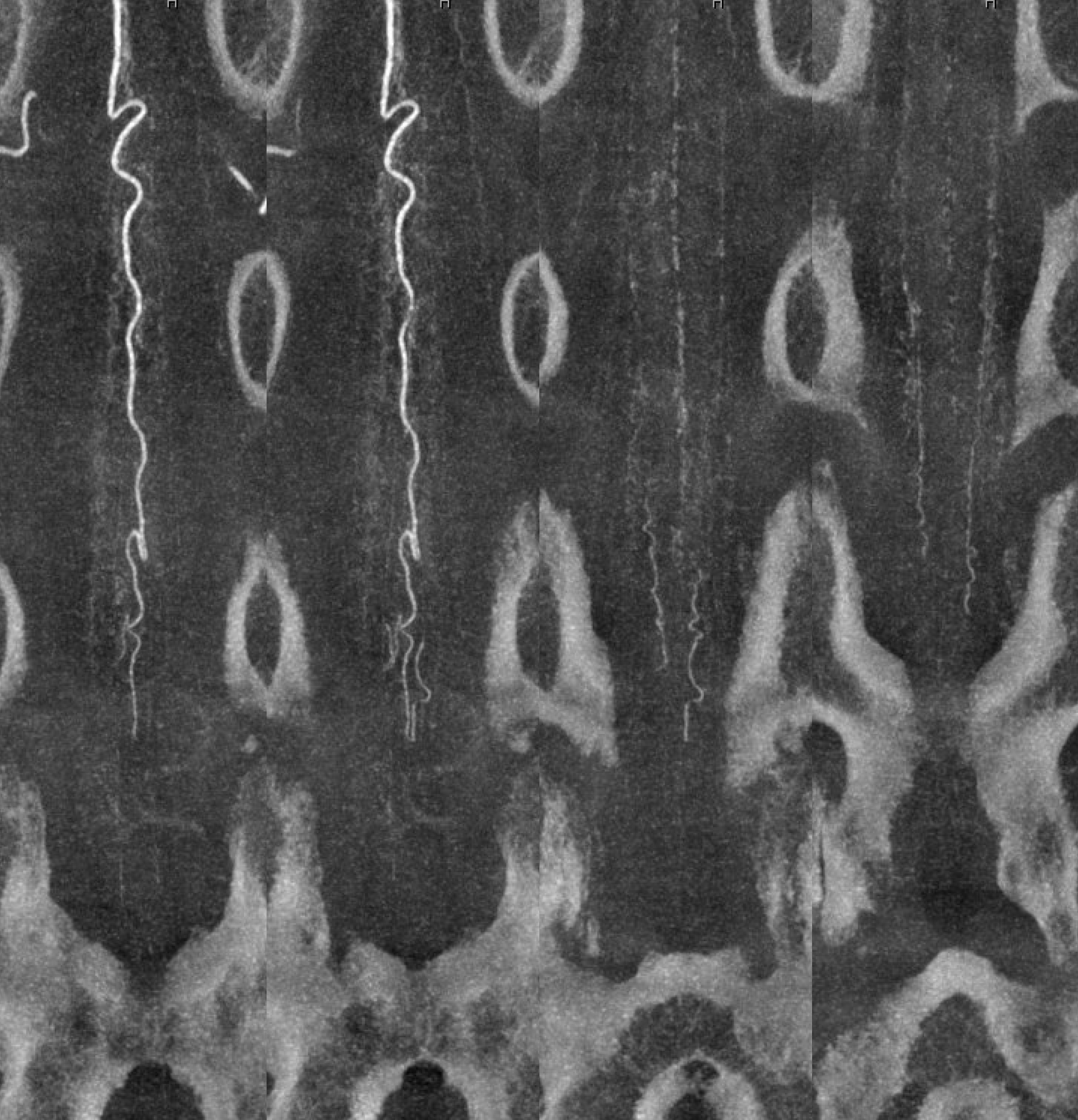 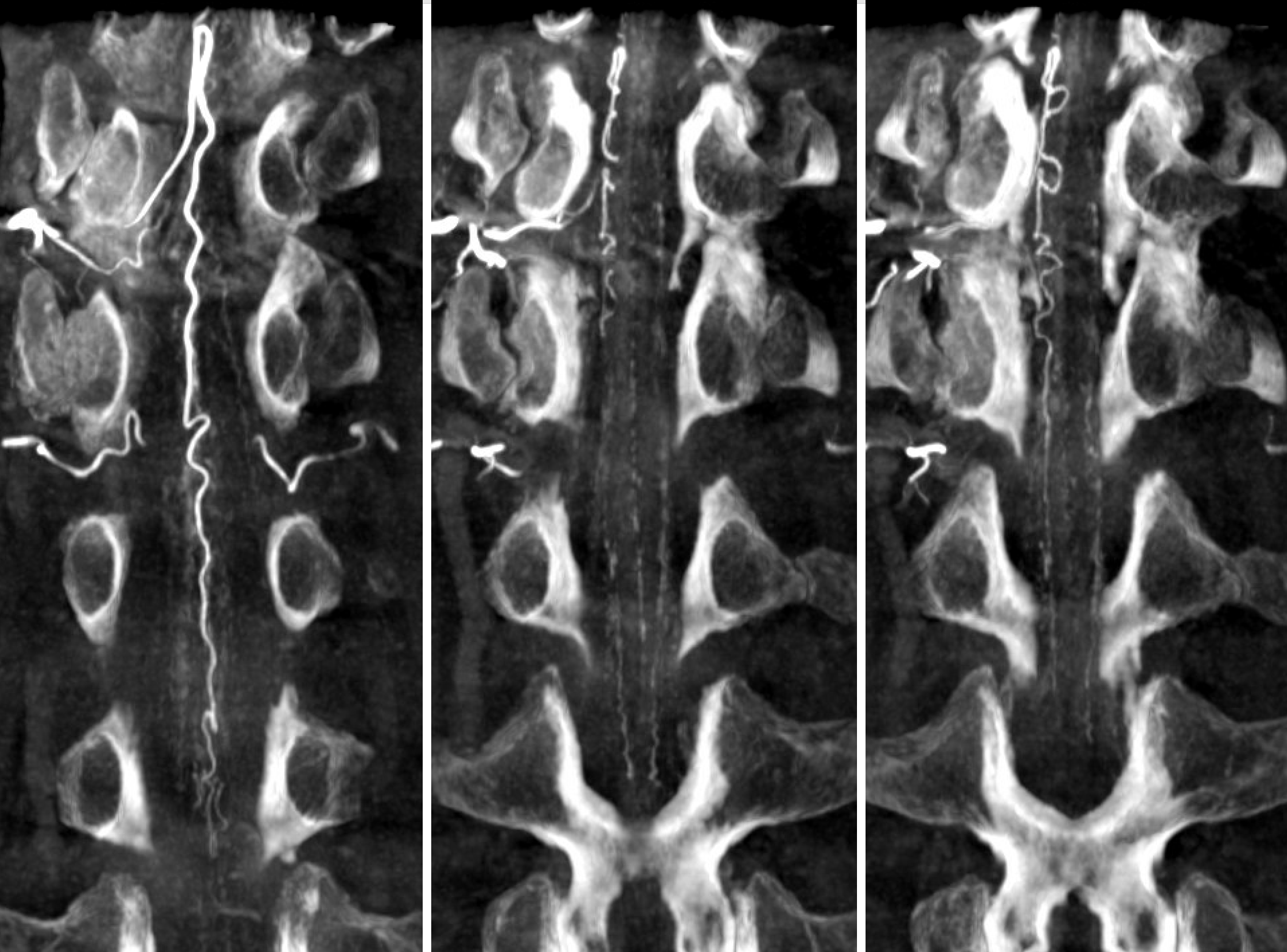 Axial video — see detail of cord  vessels.  Also notice — faintly but importantly — the serpiginous vein at the lumbosacral junction — that’s the same filum vein that drains the fistula — seen in cord venous phase.  The cord is using the same venous system, since there is no other one — showing the importance of preserving the surface veins. 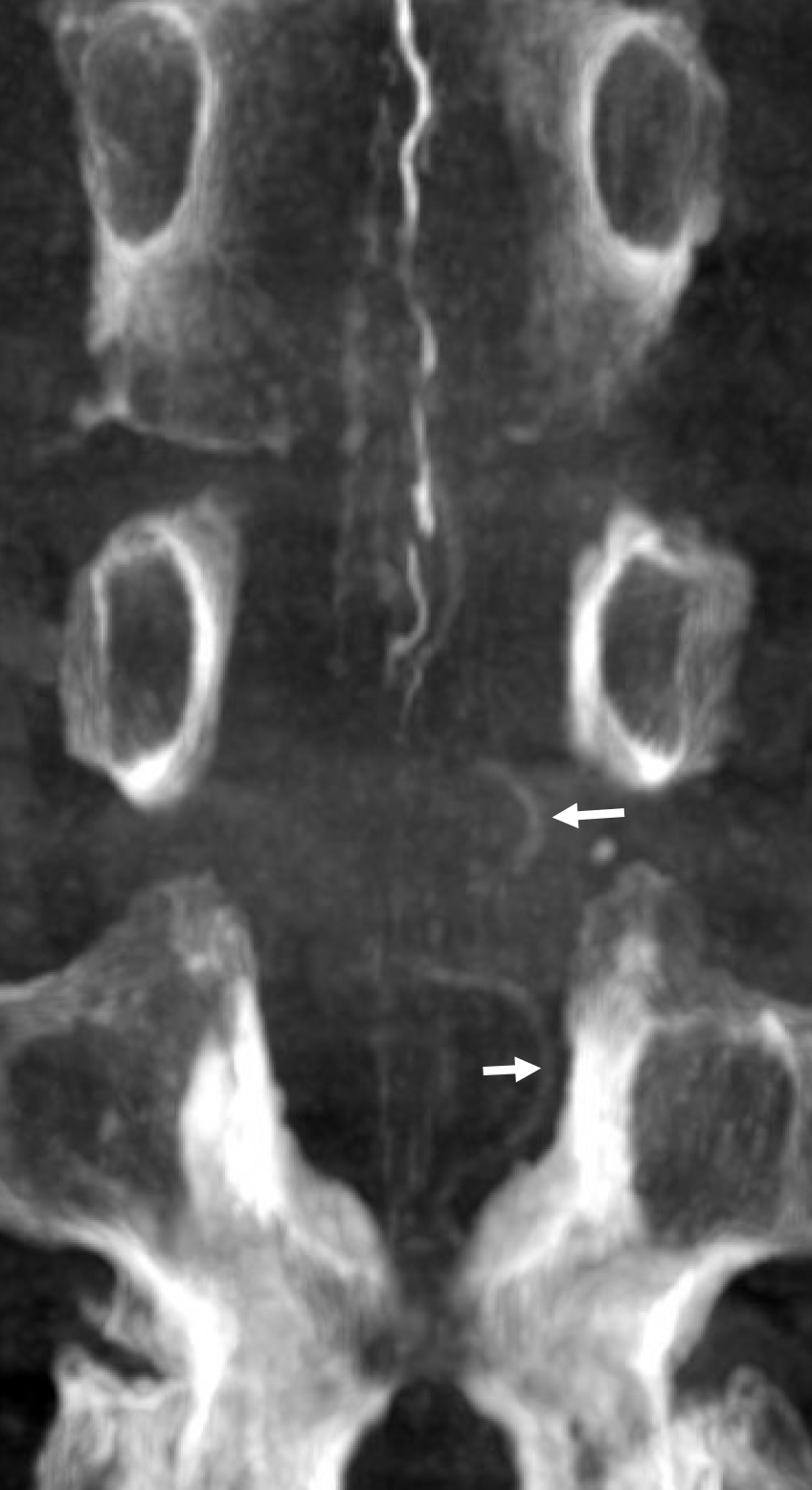 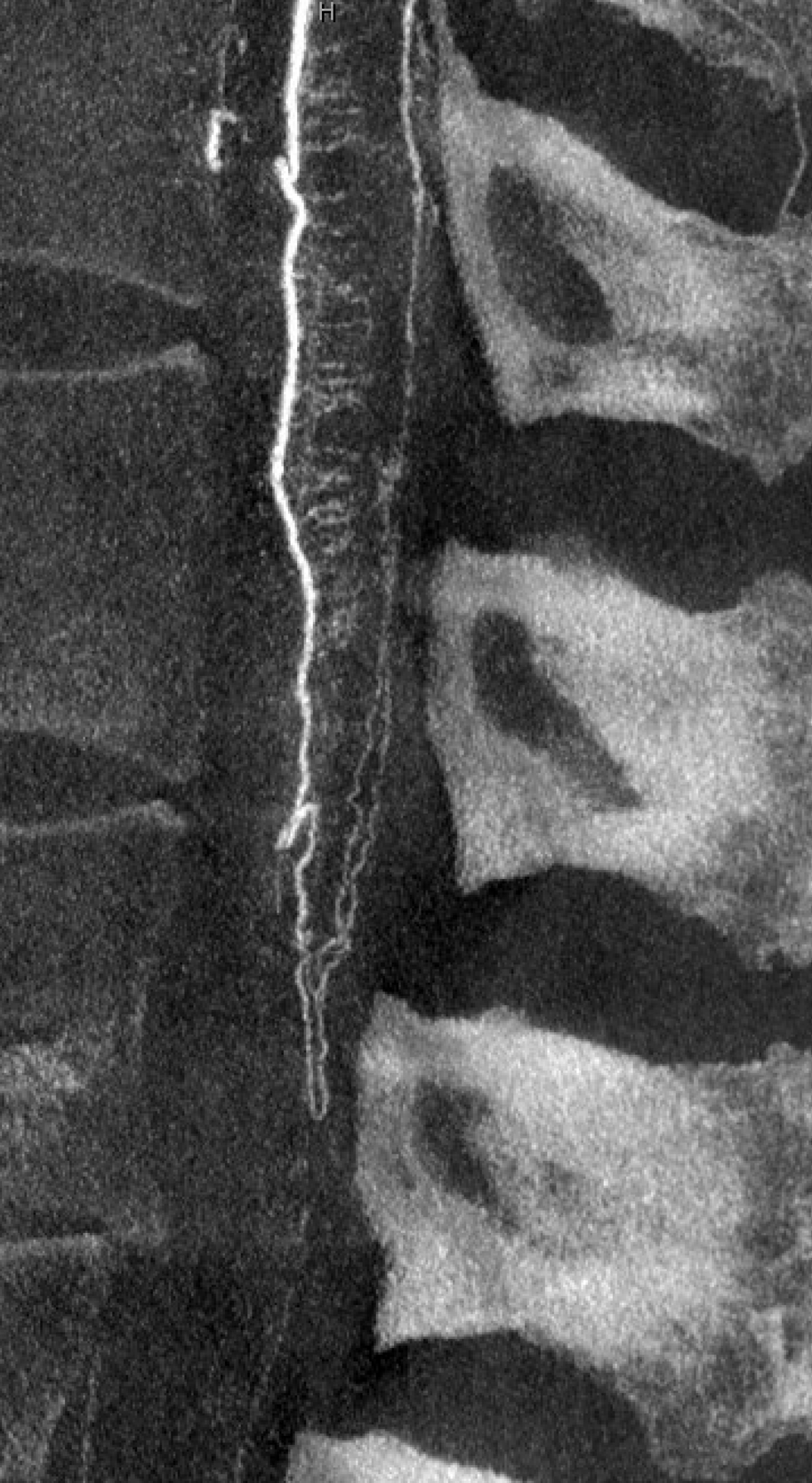 Views of mid-lower thoracic ASA — the sulco-comissural arteries are less dense and smaller in the smaller volume thoracic cord — as compared with cervical and lumbar enlargements.  Faintly seen here. 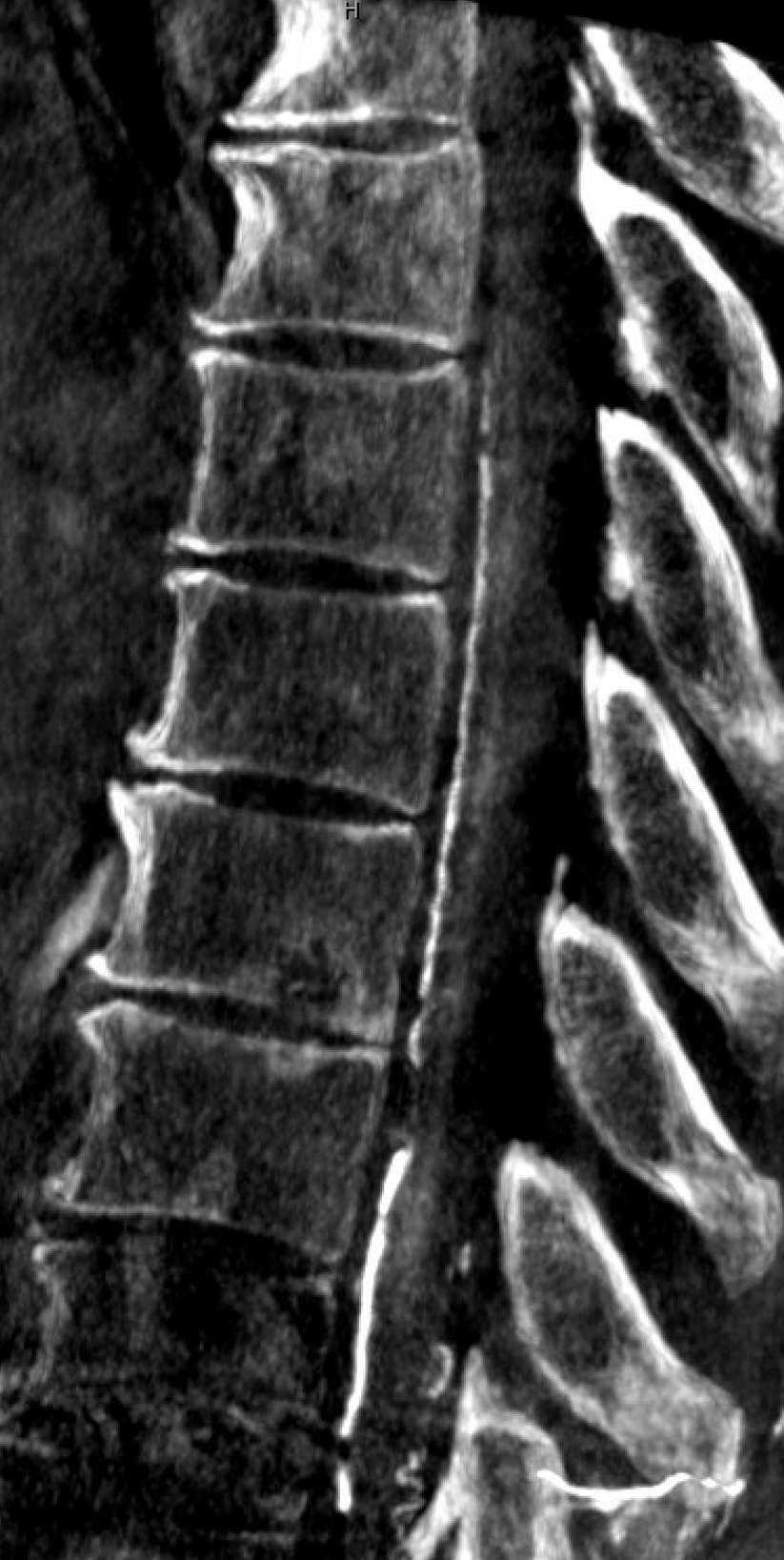 The strategy is to first close the left T5 lateral dural contribution — without permeating the fistula.  This will allow better penetration of the nBCA from the subsequent main left T6 injection.  We feel this is important to maximize the chance of success for the “big” left T6 shot.  It turned out to be the right call.

Headway duo 167 cm microcatheter — micro injection on right.  There is no “wedge” or “flow control” position here — however for this injection it is not necessary.  We just need proximal occlusion. 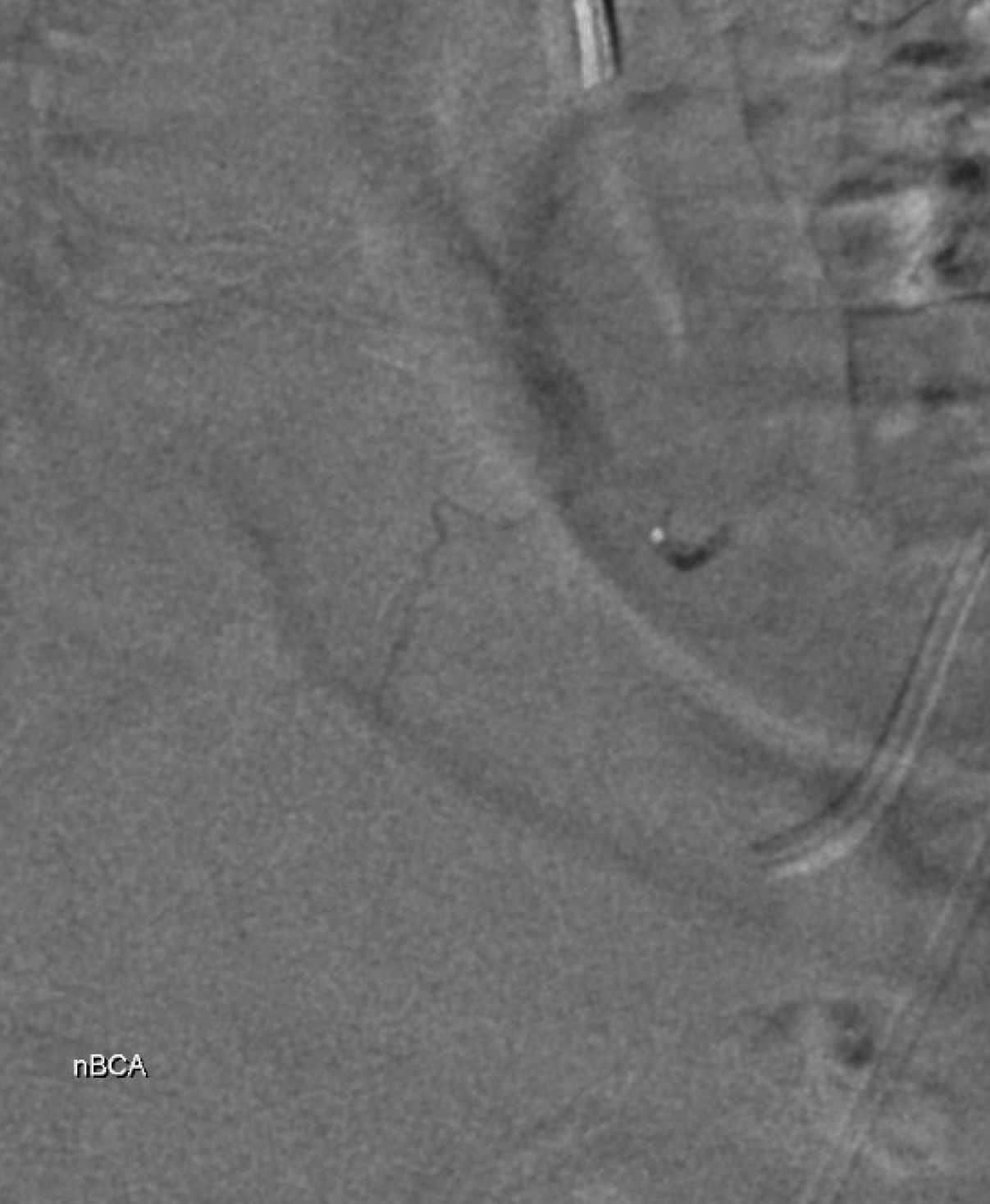 Now we check T7 — before there was no contribution from there.  Now there is — via the same lateral dural arcade.  Also shows how the fistula would be reconstituted if the left T6 injection does not reach the vein.   We chose not to embolize this before going to T6 — seemed a bit far.  But probably should have done it. 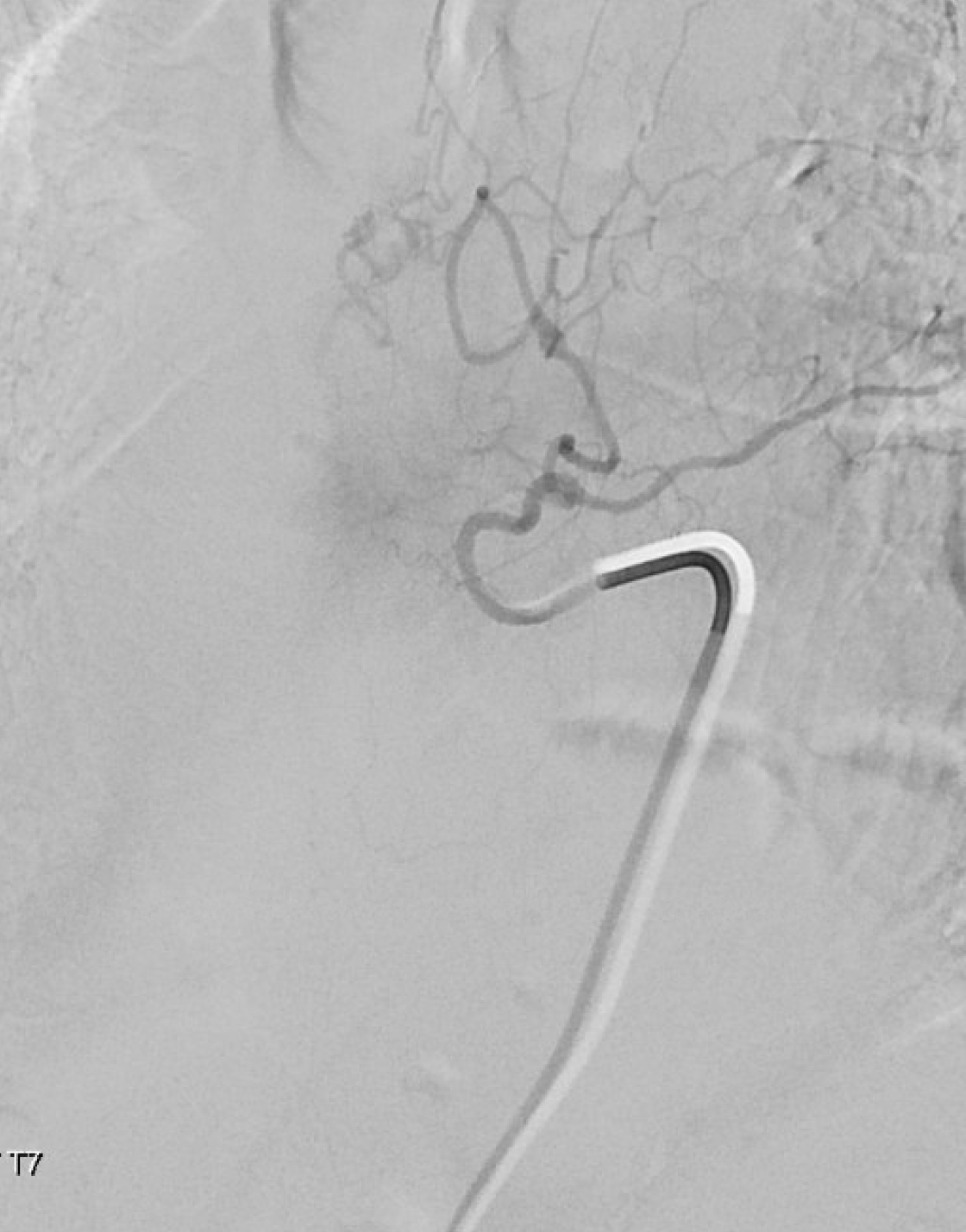 T6 — where are the branches pointed to by the arrows?  Are they spinal arteries we missed before? 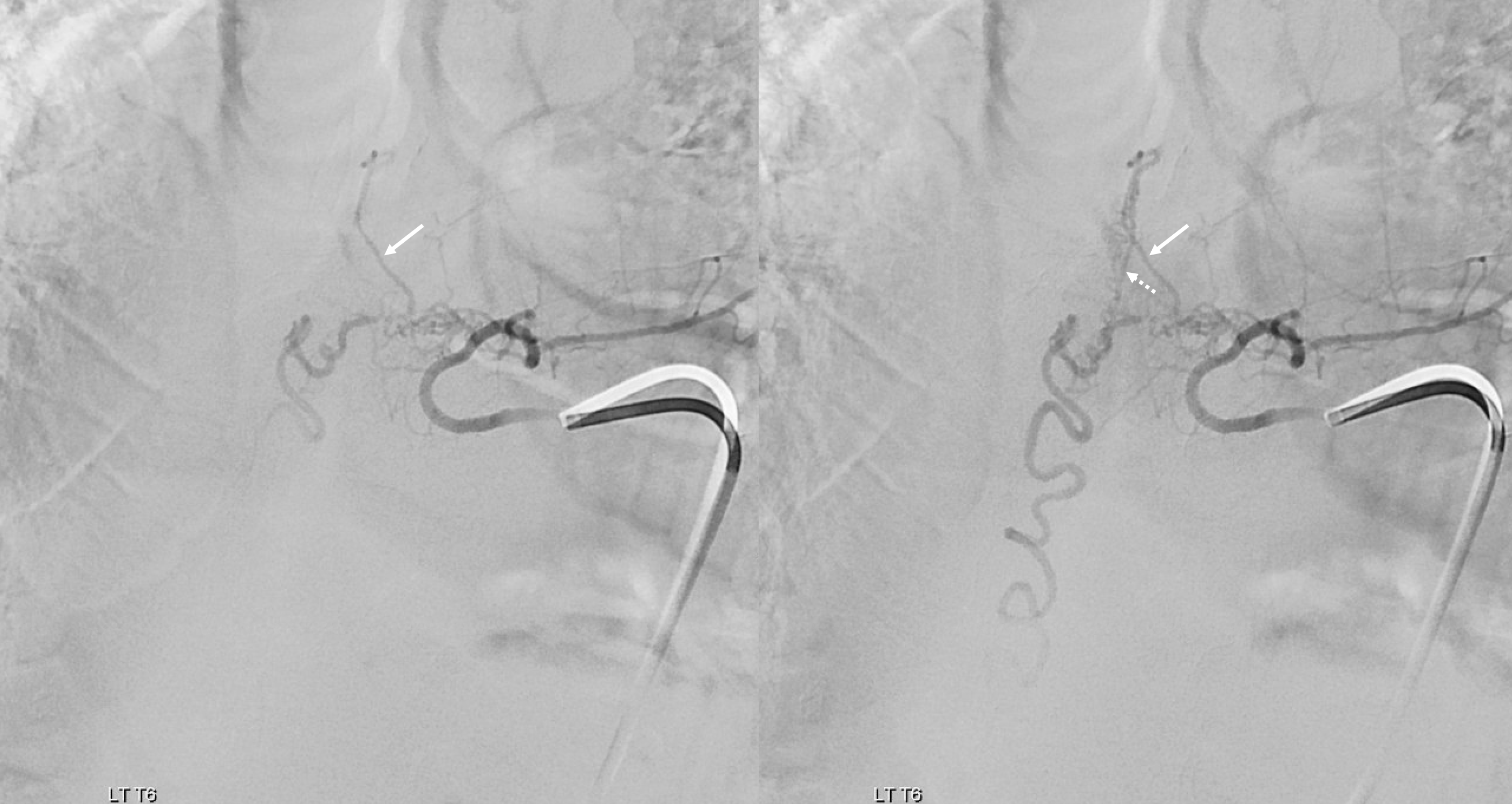 Headway duo microinjection — notice that the position is not good — it is too proximal and there is no “flow control” — the microcatheter is not wedged into a branch, and there is a lot of reflux.  This is a very bad glue position.  What typically happens is that the glue polymerizes quickly and begins to reflux.  Further progress is usually impossible. 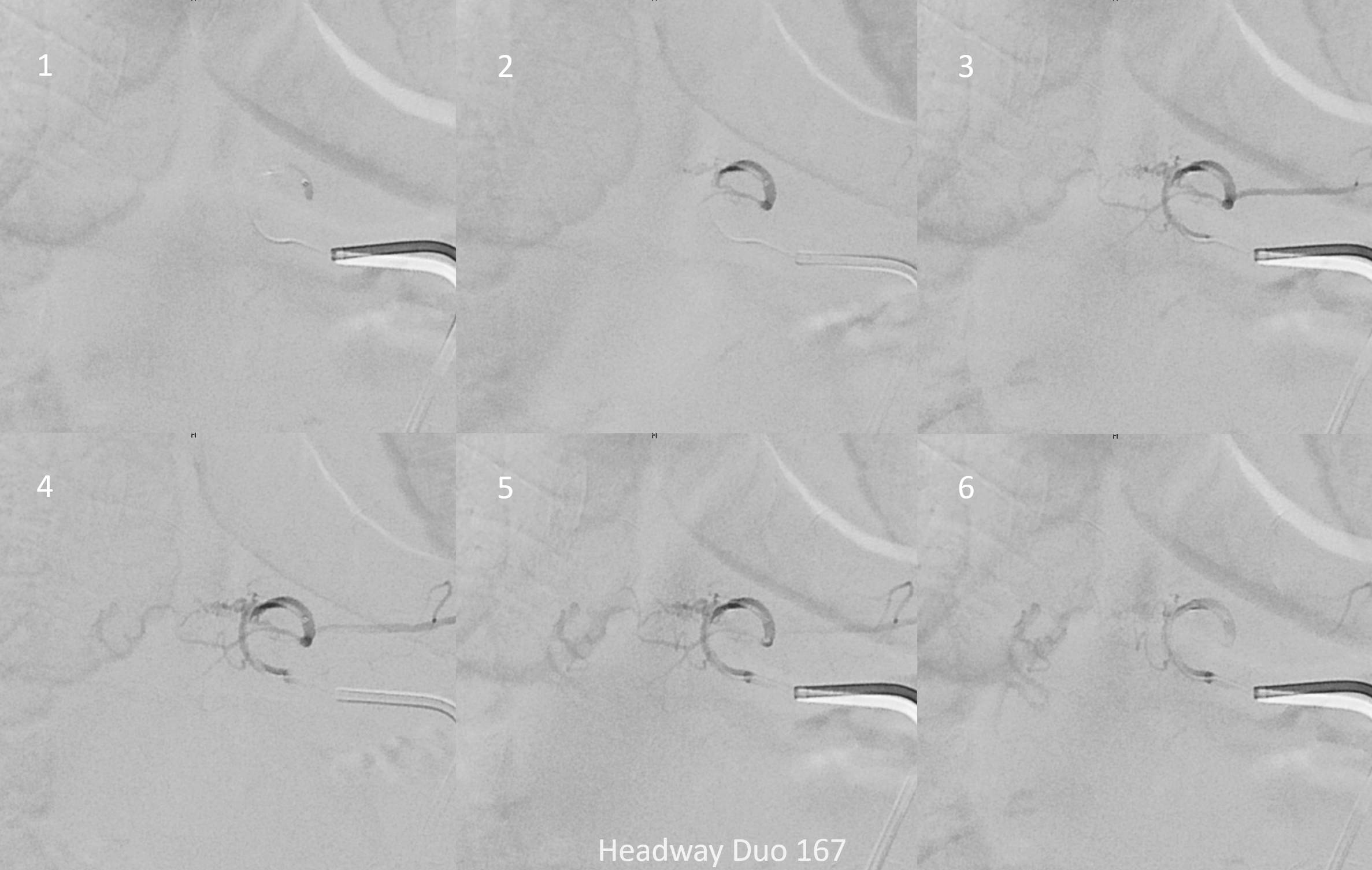 Since you are really only getting one shot at this, the shot must be the best one possible.  This position will not do.  We need to either advance the microcatheter into a favorable wedge position or switch to another microcatheter.  The former is better, but it did not work.  Therefore, we switched to a Scepter C dual lumen balloon microcatheter.  It is way stiffer than then duo, but allows for flow control with balloon inflated, and having flow control is much more important than being more distal without flow control.

Images below show no reflux with balloon inflated.

A scepter mini may work also.  However it sometimes cloggs and has a smaller injection lumen, and we will only have one shot.  If the duo did not reach a good position, neither will the mini. 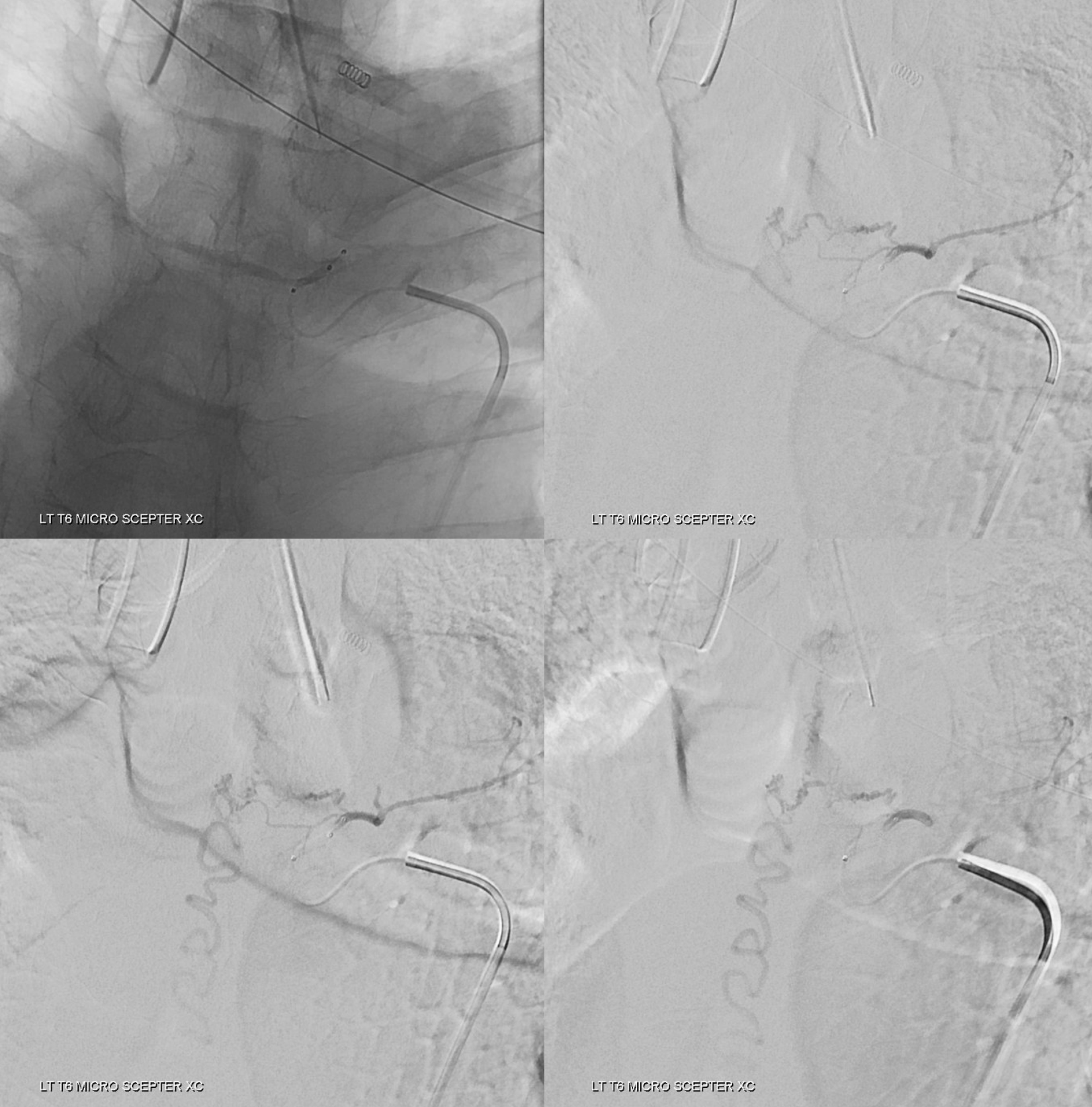 Movie of glue injection. In real time.  Notice how the glue for a long time does not go where its needed.  The injection continues — into the intercostal artery off the screen — its safe there. At the end, a 1 sec break followed by short strong push breaks permeates the perifustulous arterial network and reaches the “foot” of the vein.  Thankfully.  The preceding T5 embo helped the glue reach the vein.  Probably T7 embo would have been good too, but worked anyway 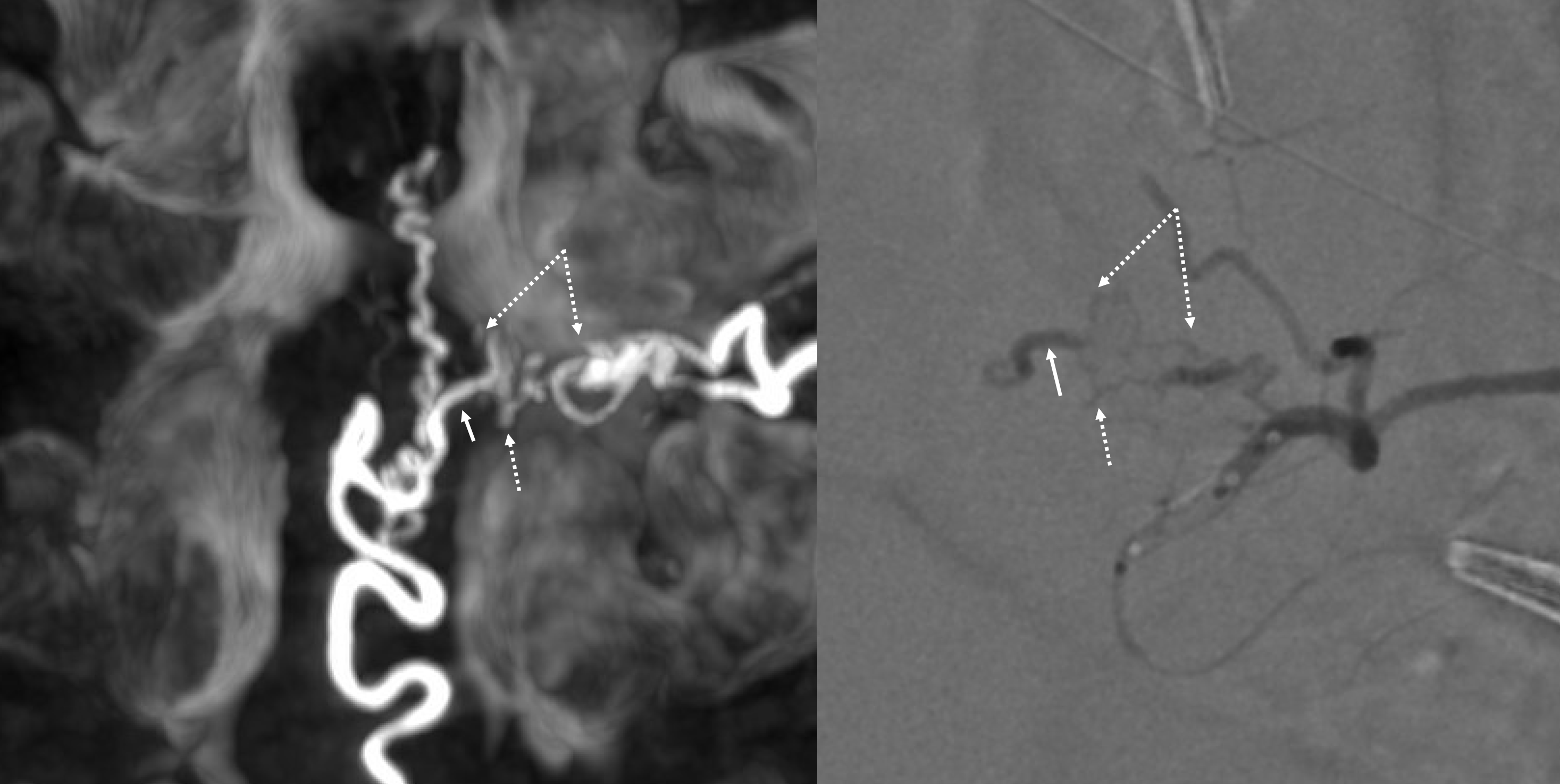 Should Onyx be used instead of nBCA? The answer is no.  It is a decidedly inferior agent for vast majority of spinal dural fistula work.  Great for many other things, but not this one.  Much of the misinformation on low embolization efficacy in dural fistula cure is based on use of Onyx.

Its not so much about the agent, as it is about understanding the goal of embolization — to reach the proximal vein.  Any agent that does that — or surgical disconnection — will be fine.   Onyx is less likely to do that in dural fistulas than glue.

Post from adjacent levels — key to make sure fistula is really closed.  Especially from left T7 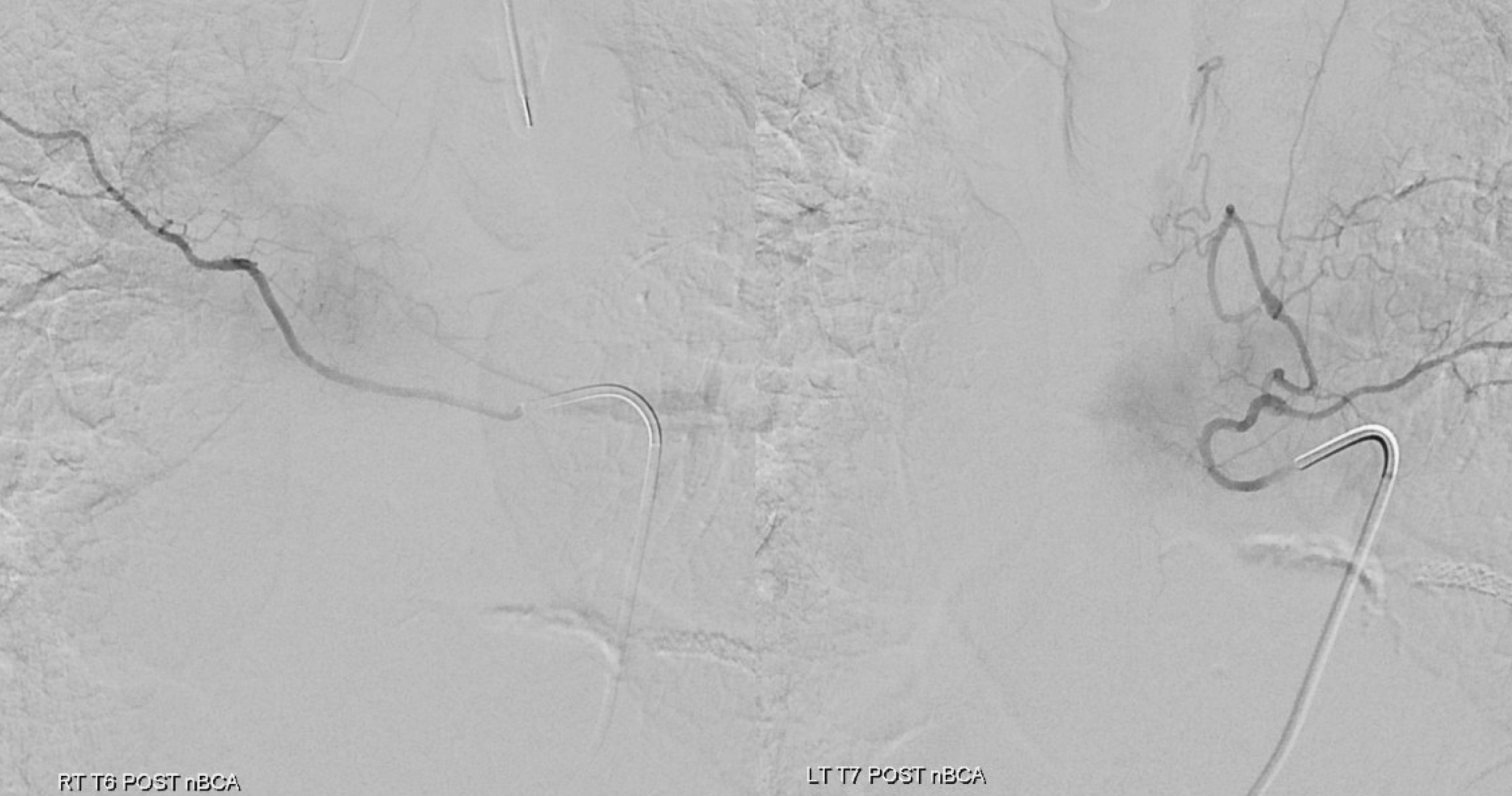 Now for the ASA — bingo!  Venous drainage is back — the big vein previously used by the fistula is now back in cord possession.  Beautiful. 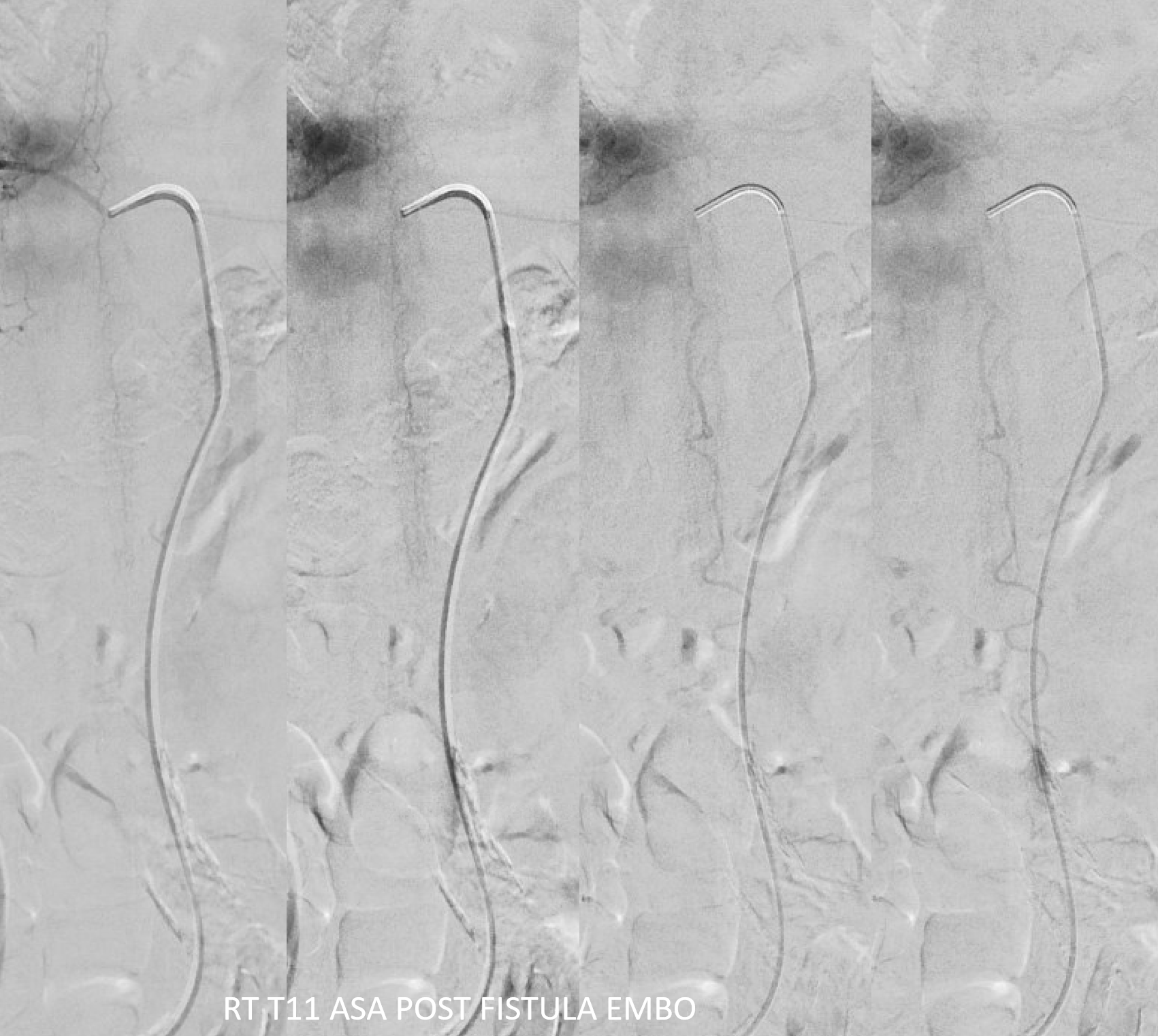 Its important to minimize the risk of the dilated spinal cord veins thrombosing before they shrink to their normal physiologic size.  At minimum should use aspirin.  Anticoagulation is better.  In this case, we gave 5K heparin bolus, therapeutic drip overnight, and Eliquis in am — the patient was on Eliquis at baseline and it will be continued.