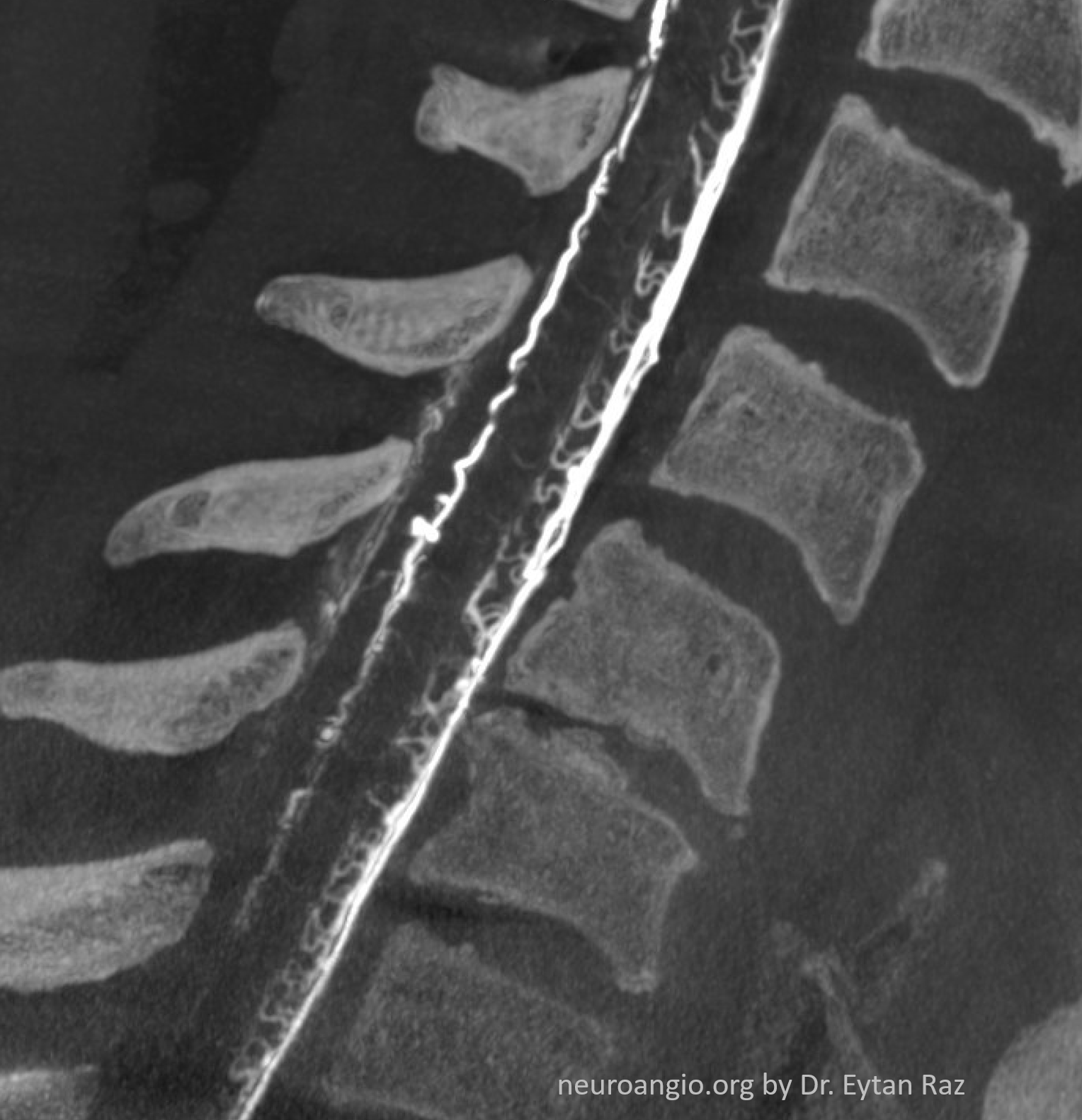 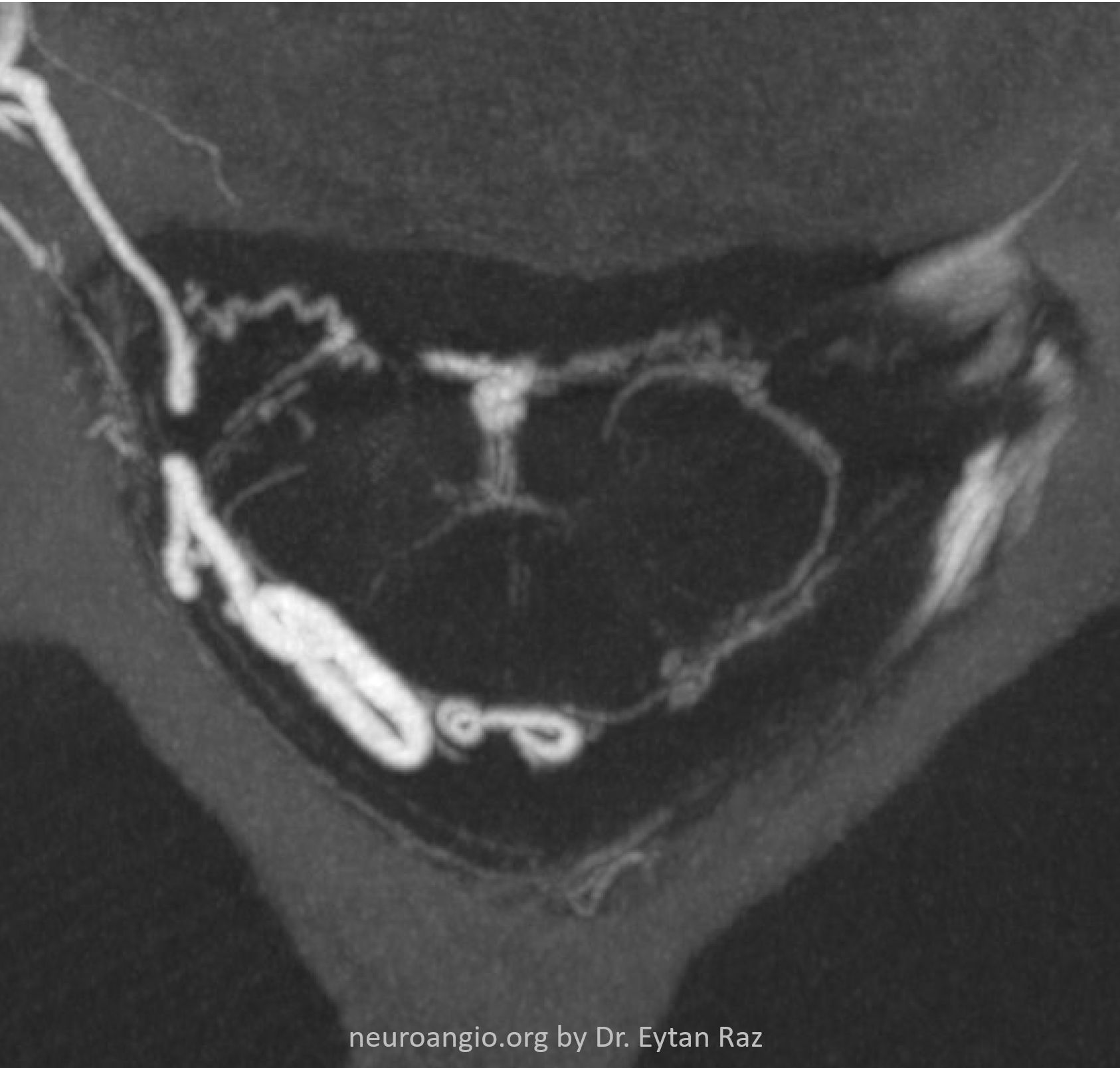 These are not as rare as it may look.  Probably more often asymptomatic or mildly symptomatic in our experience as compared with cervical or thoracic ones.  The angioarchitecture is the same — shunt in nerve root sleeve, retrograde spinal venous congestion.  The smaller volume of neck as compared with the body affords the best cone beam CT images of the spinal cord.  Plus the operator skill…  These images are starting to resemble Armin Thron’s… 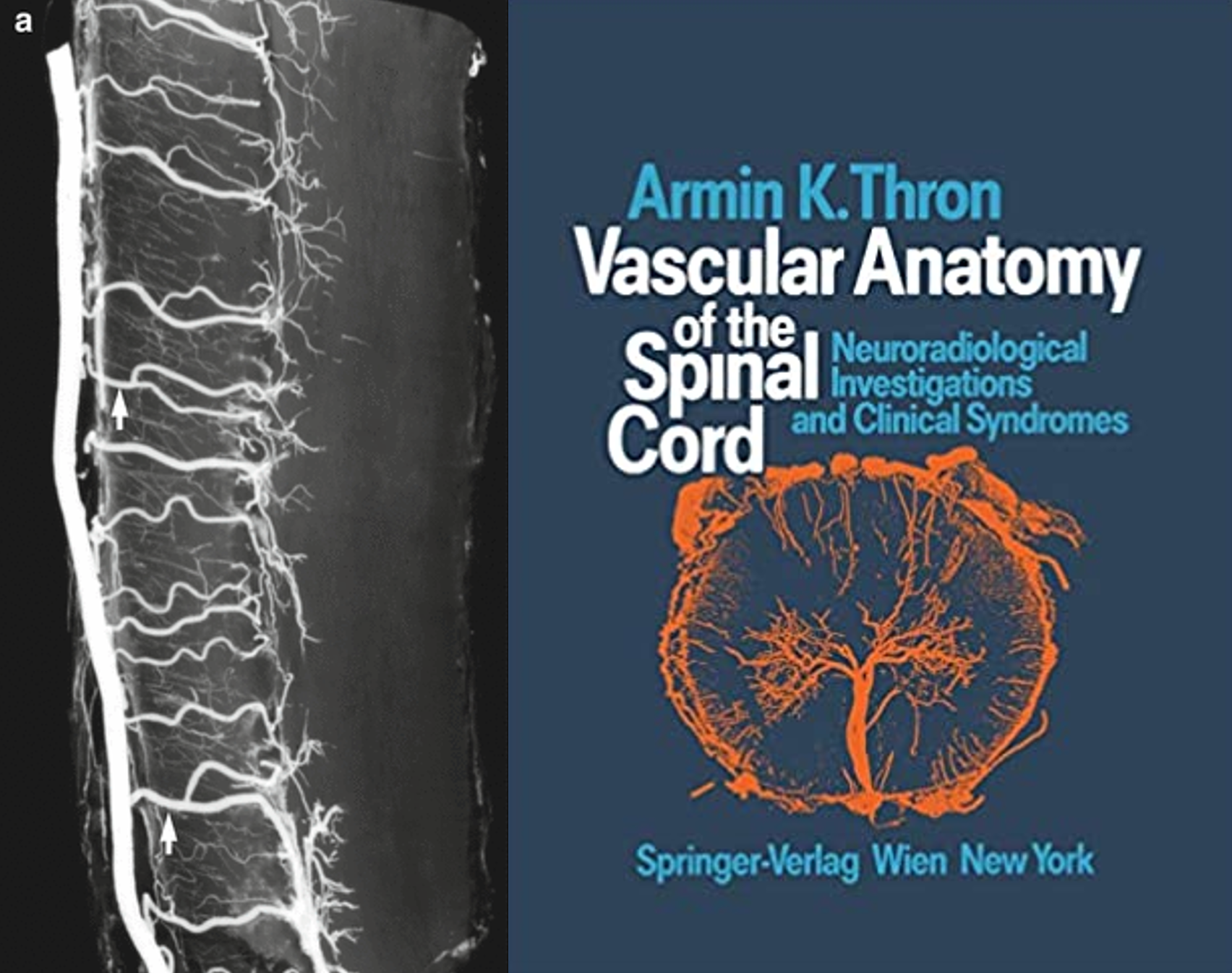 Got some ways to go, but for in vivo its amazing

Here is the DSA — frontal vert injection.  The right C6 segmental artery (white ball arrow) supplies the fistula (dashed white arrow) as well as the radiculomedullary artery (ball black arrow) which opacifies the anterior spinal artery above (black arrow) and below (dashed black arrow).  Notice that the inferior anterior spinal artery is not visible in the middle image — which is taken just after injection finishes.  This is hemodynamics — also note reflux into proximal vert on earlier left-sided image, compared with middle and right ones.   The posterior spinal vein is white arrows. 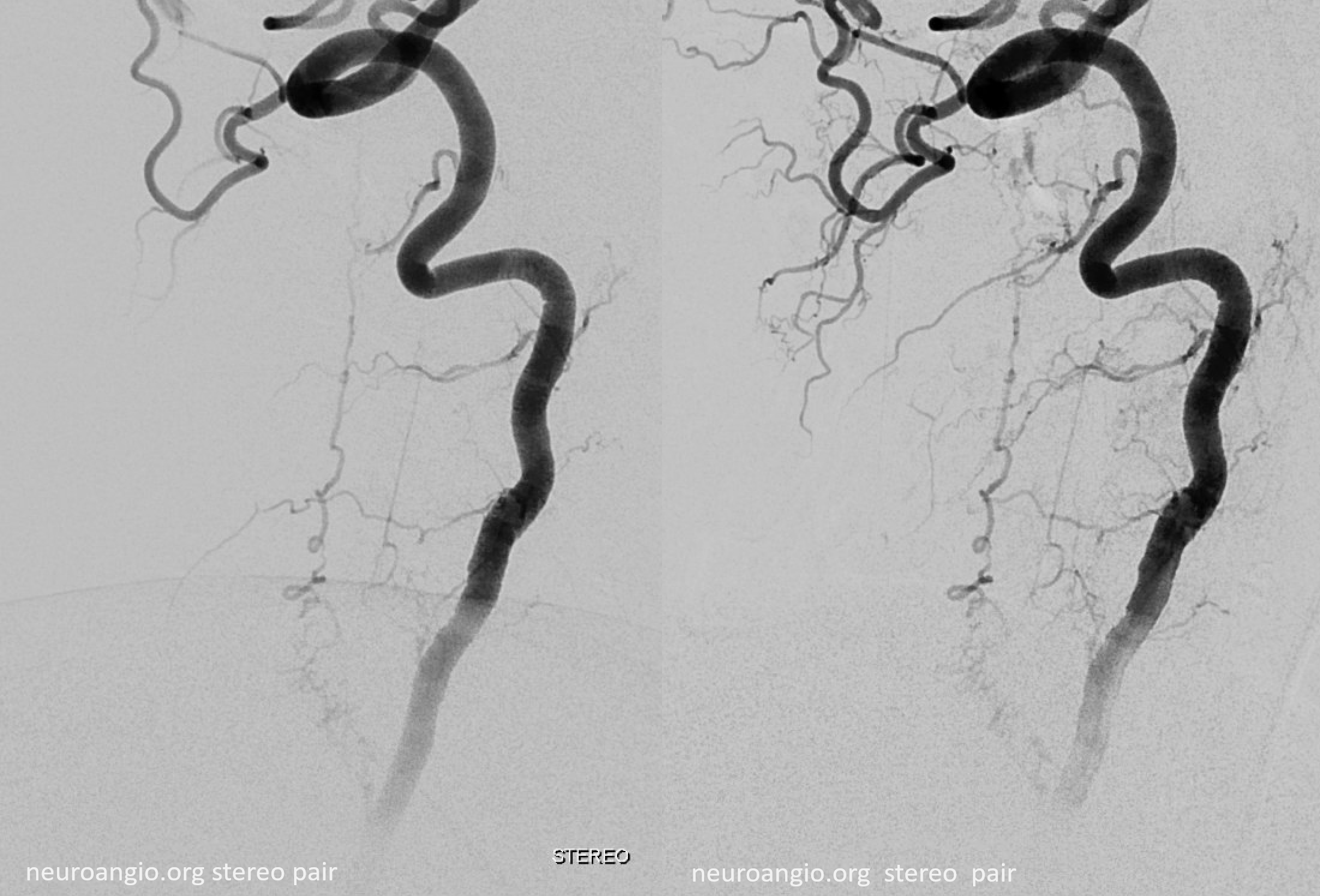 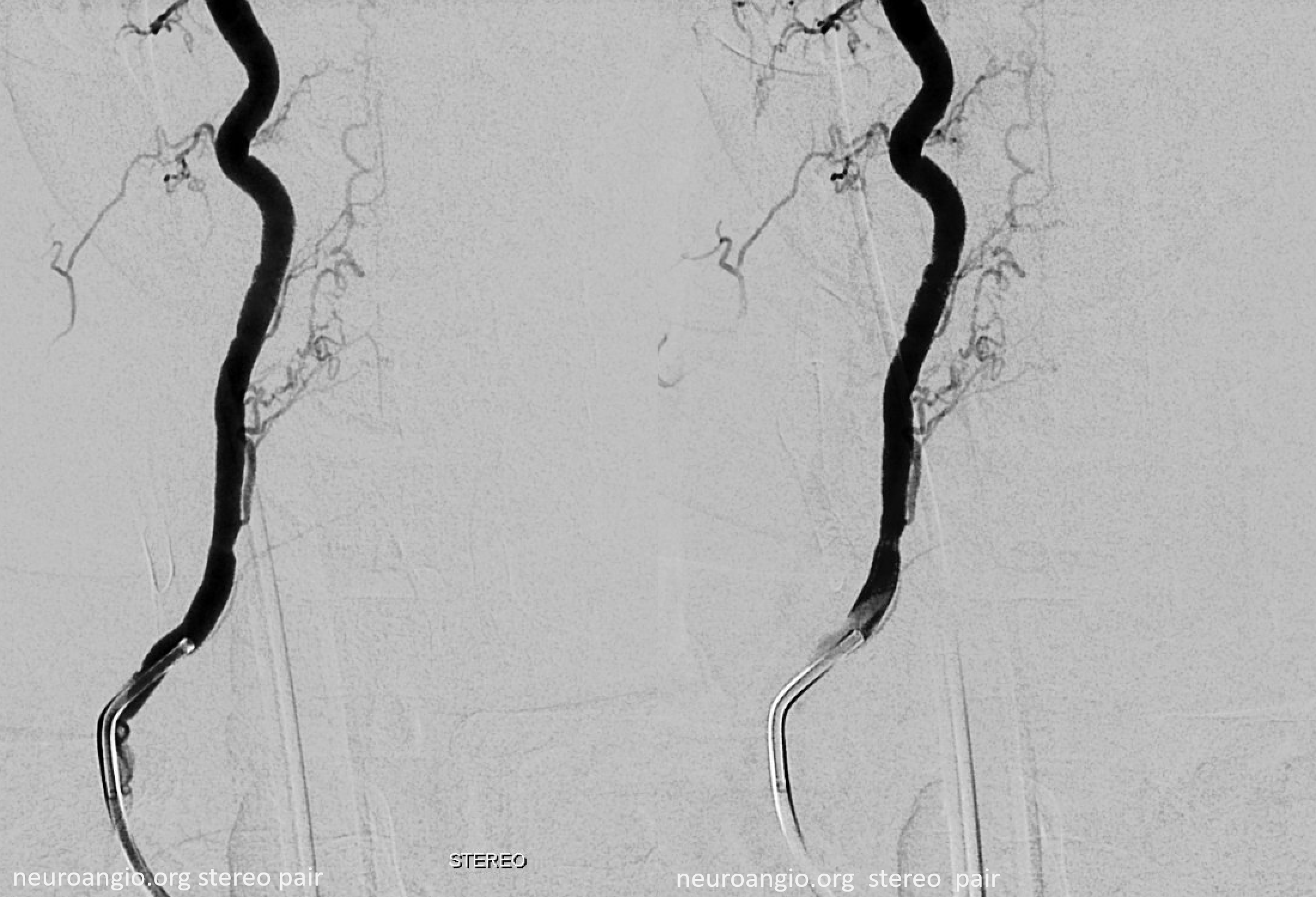 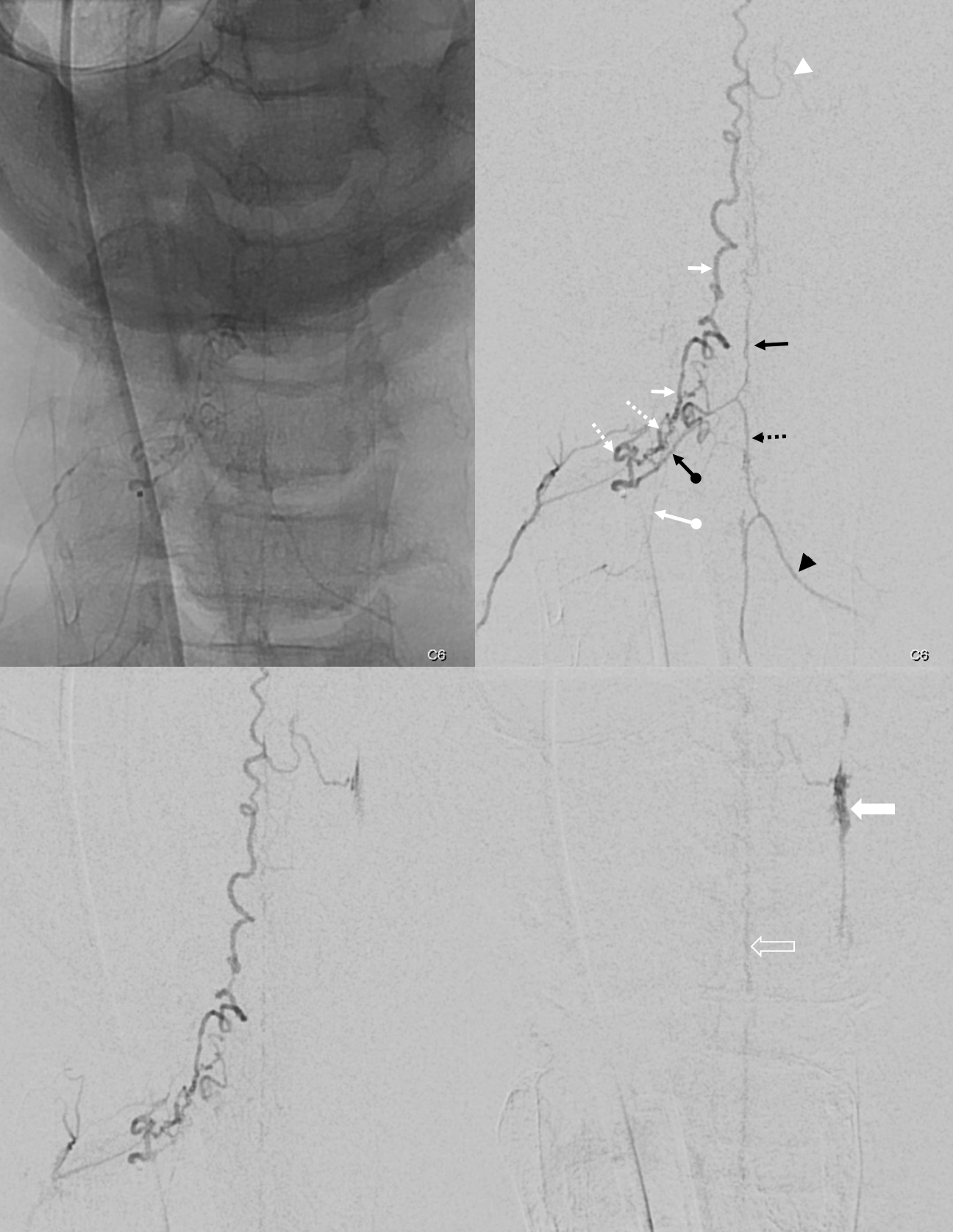 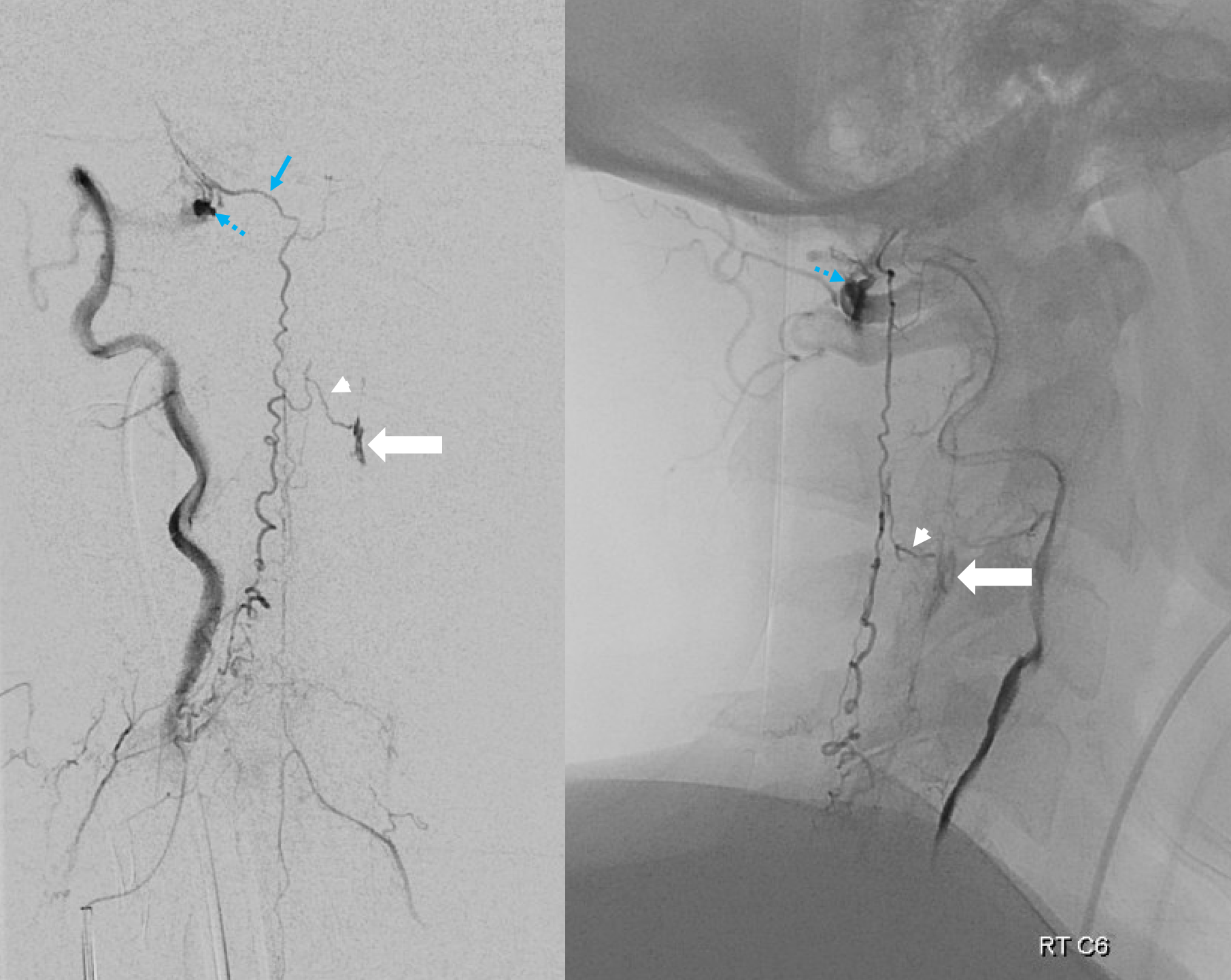 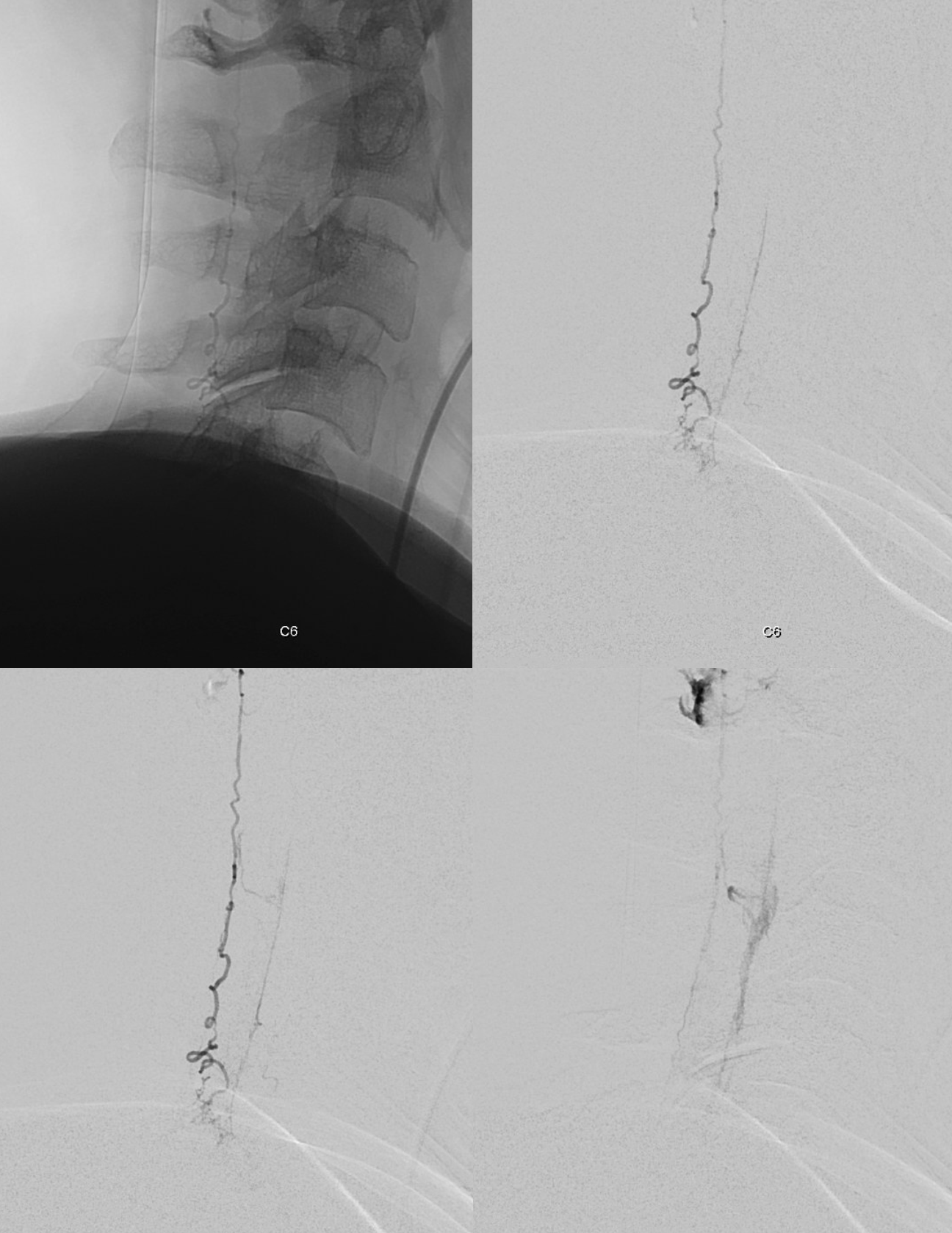 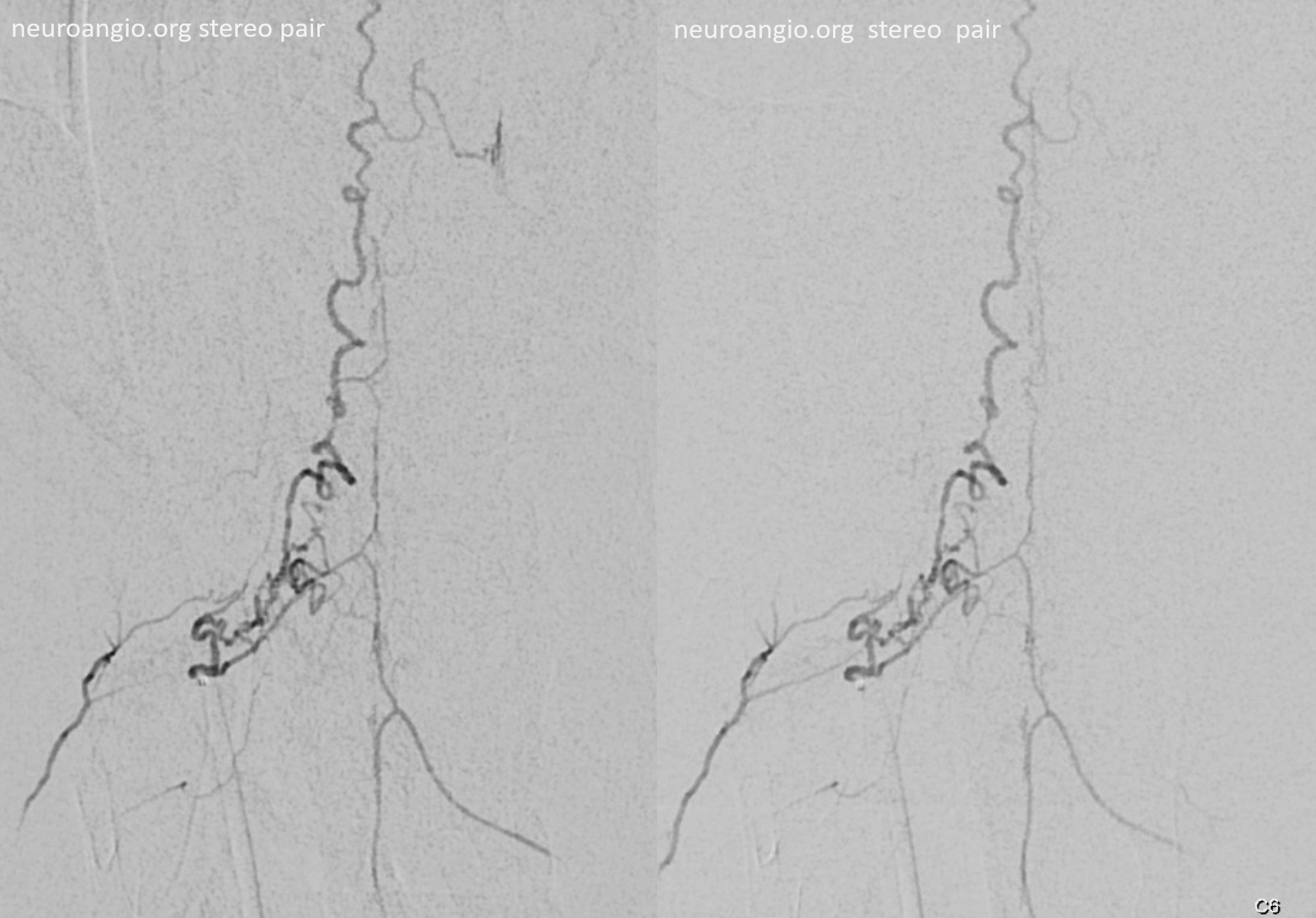 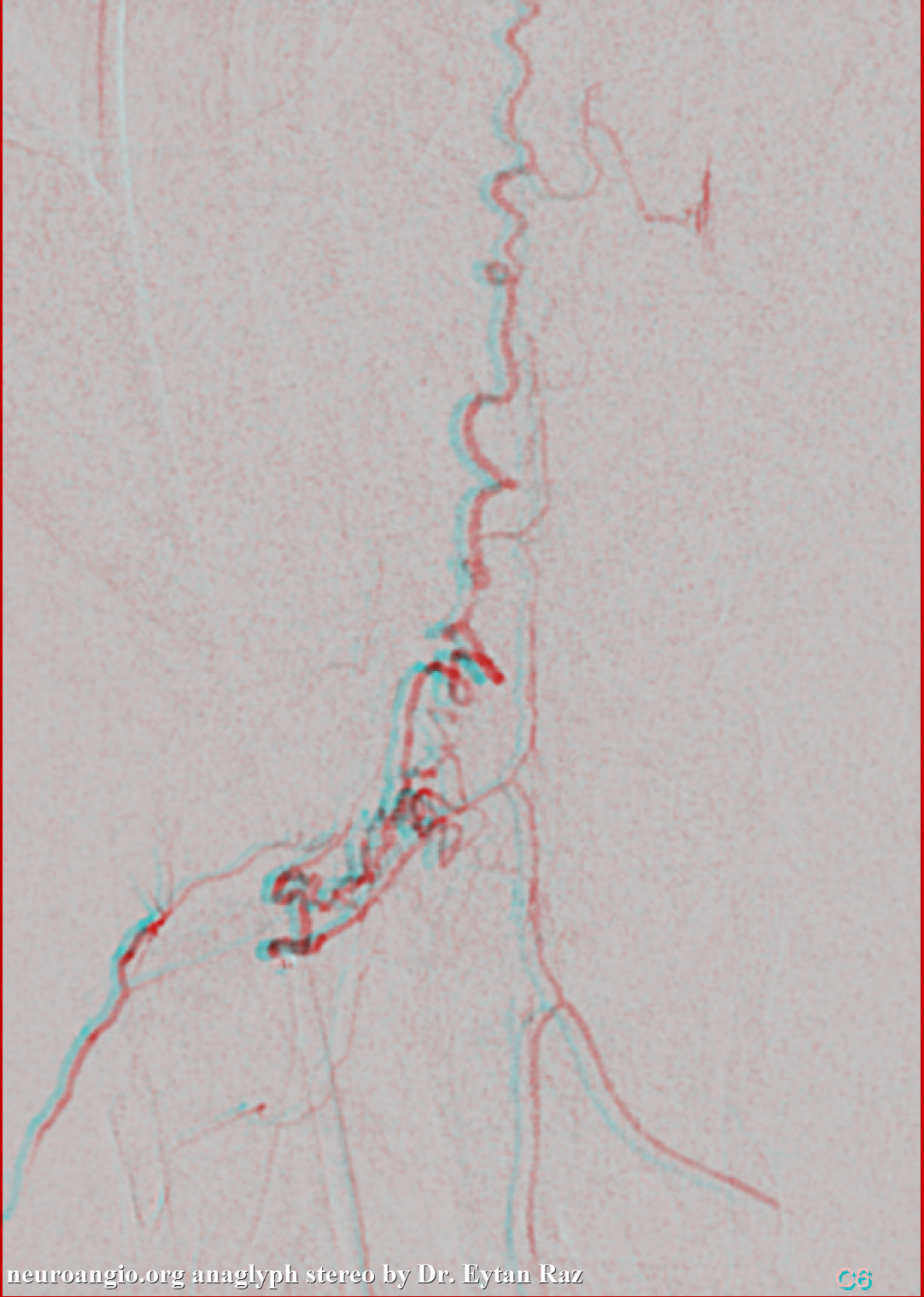 Volume rendered stereo pair — best to see separate supply of the fistula via the dorsal root branch, and the anterior spinal axis via the ventral root (radiculomedullary) branch. 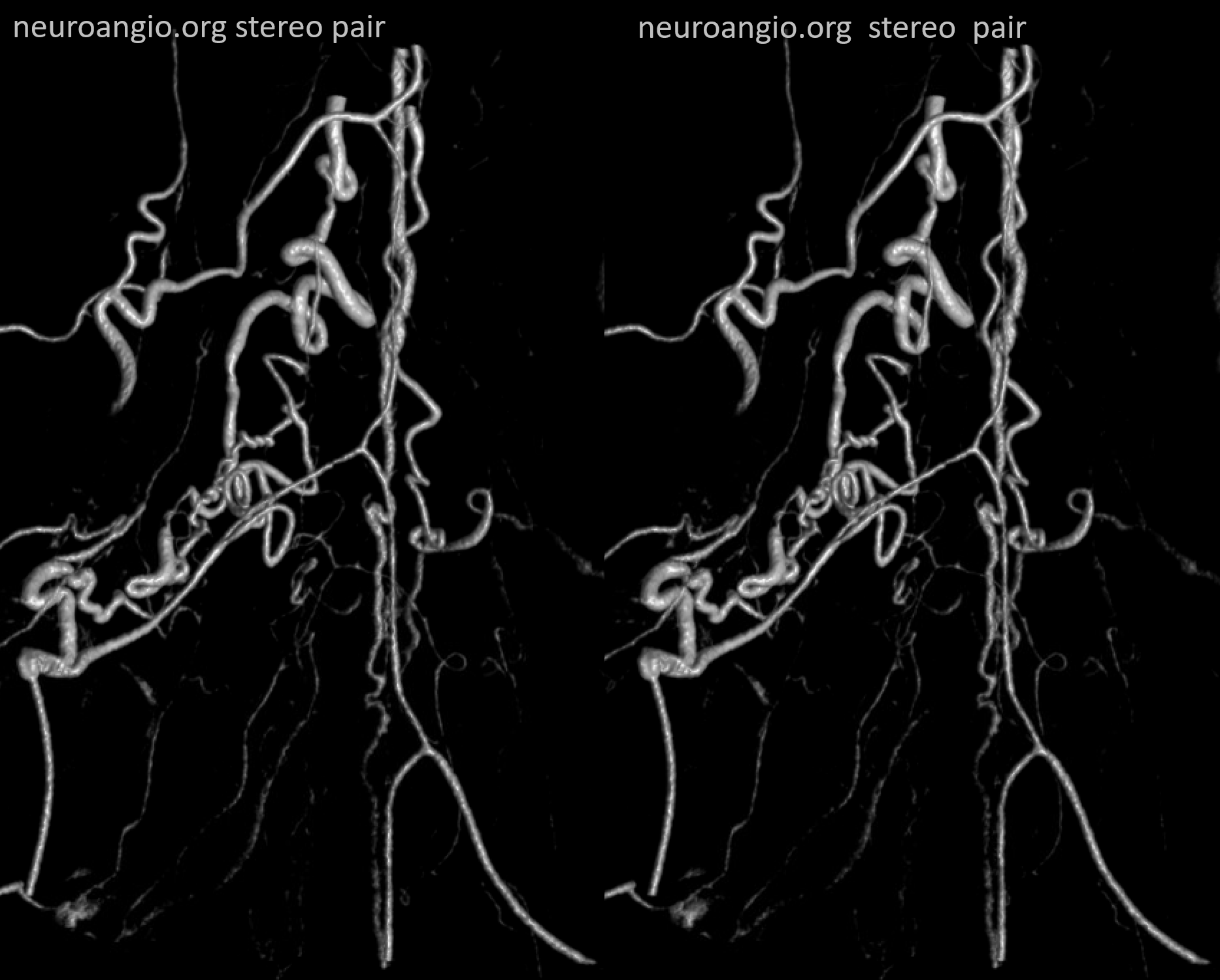 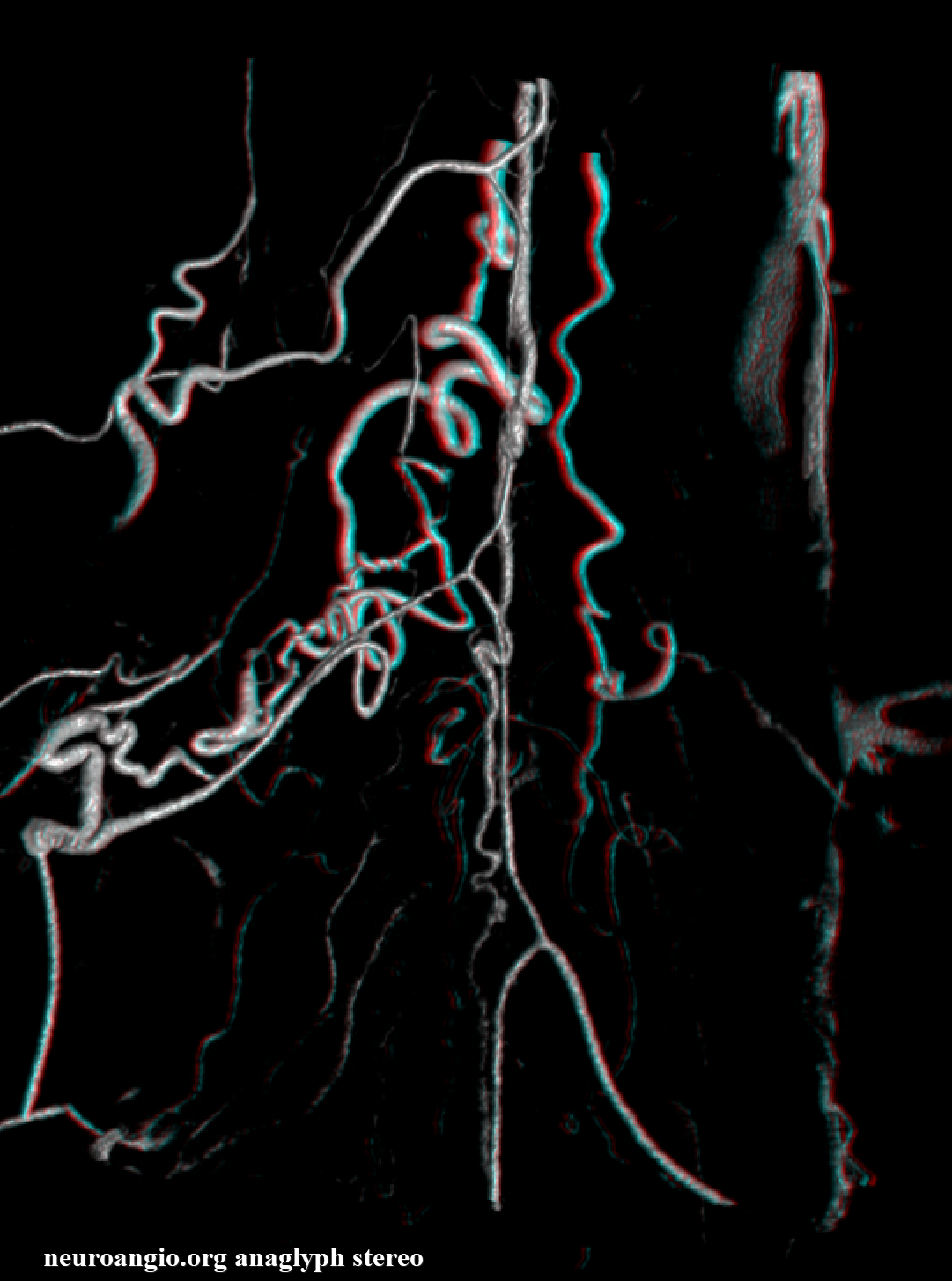 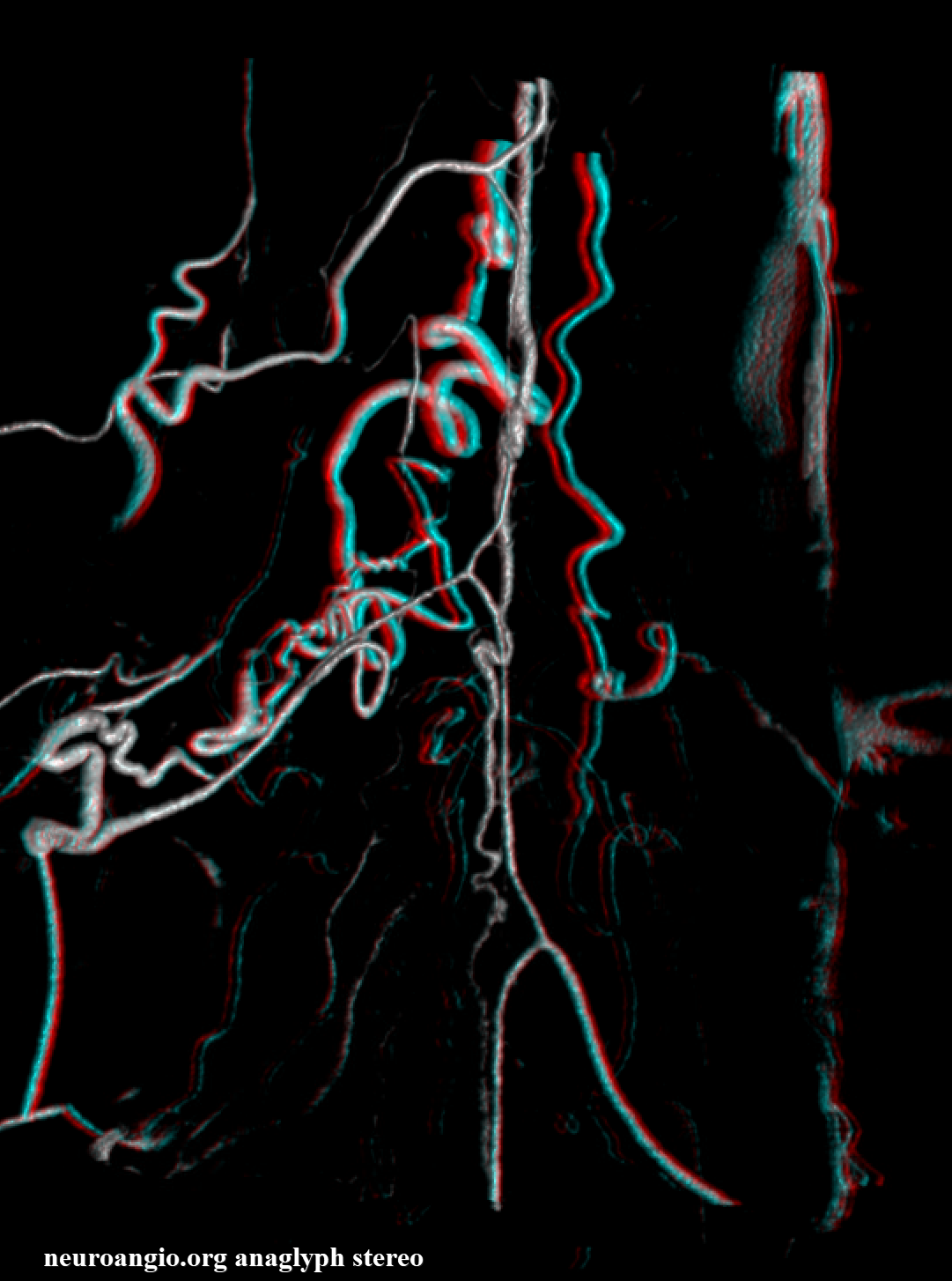 Now for some awesome MIPs — mixed arterial and venous phase still — but breathtaking.  The sulco-commissural arteries and the gray matter arbor vitae are super.

Notice the congestion around the C6 contribution to the brachial plexus 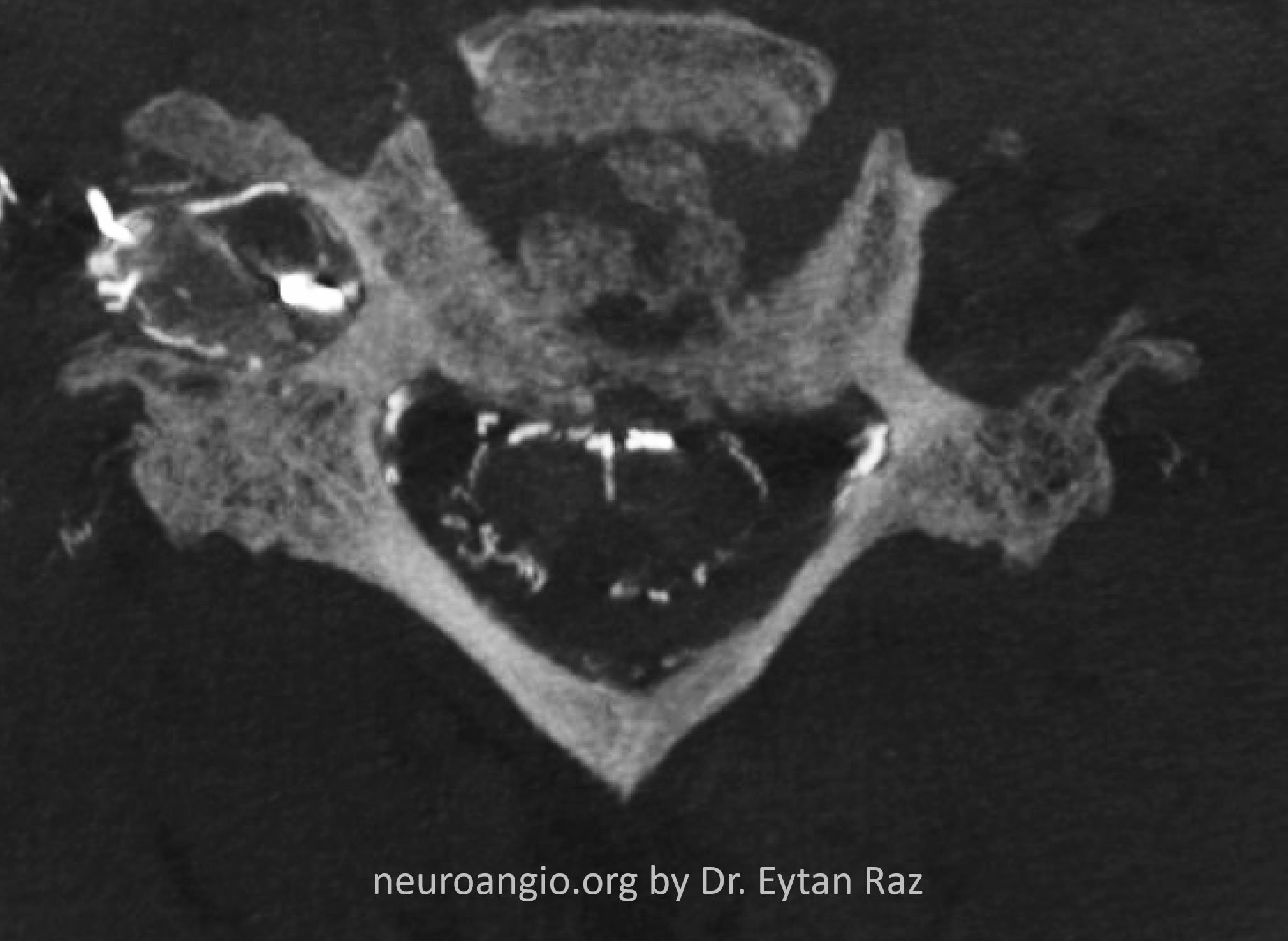 Look at the density and course of sulco-comissural arteries. Their opacification is independent of the dural fistula presence, and requires subselective segmental artery catherization. 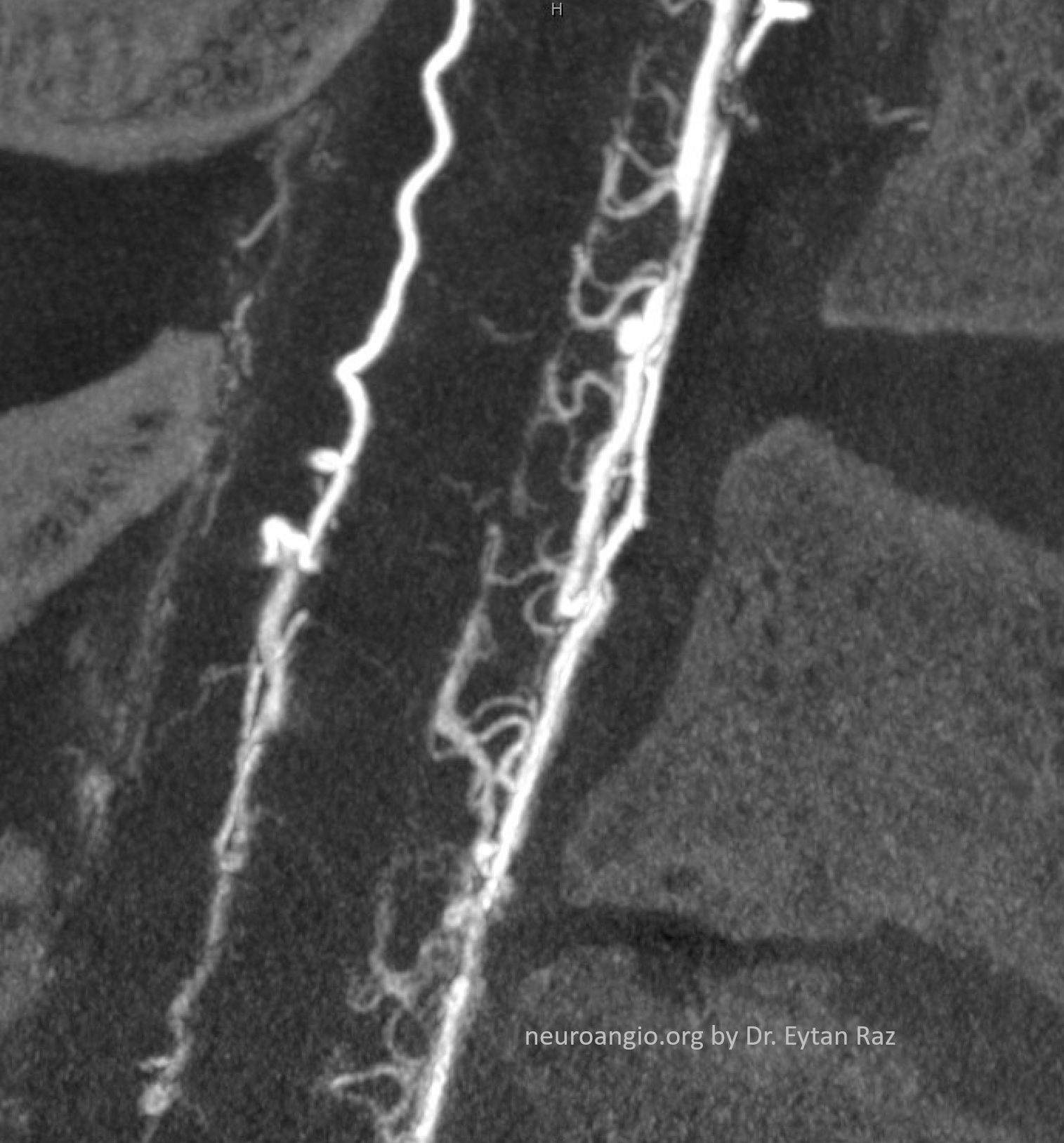 Done? Of course not — we save the best for last — to reward the attentive reader.   Lets look closer at the fistula region — it seems a bit too busy inside the white oval. What’s going on? 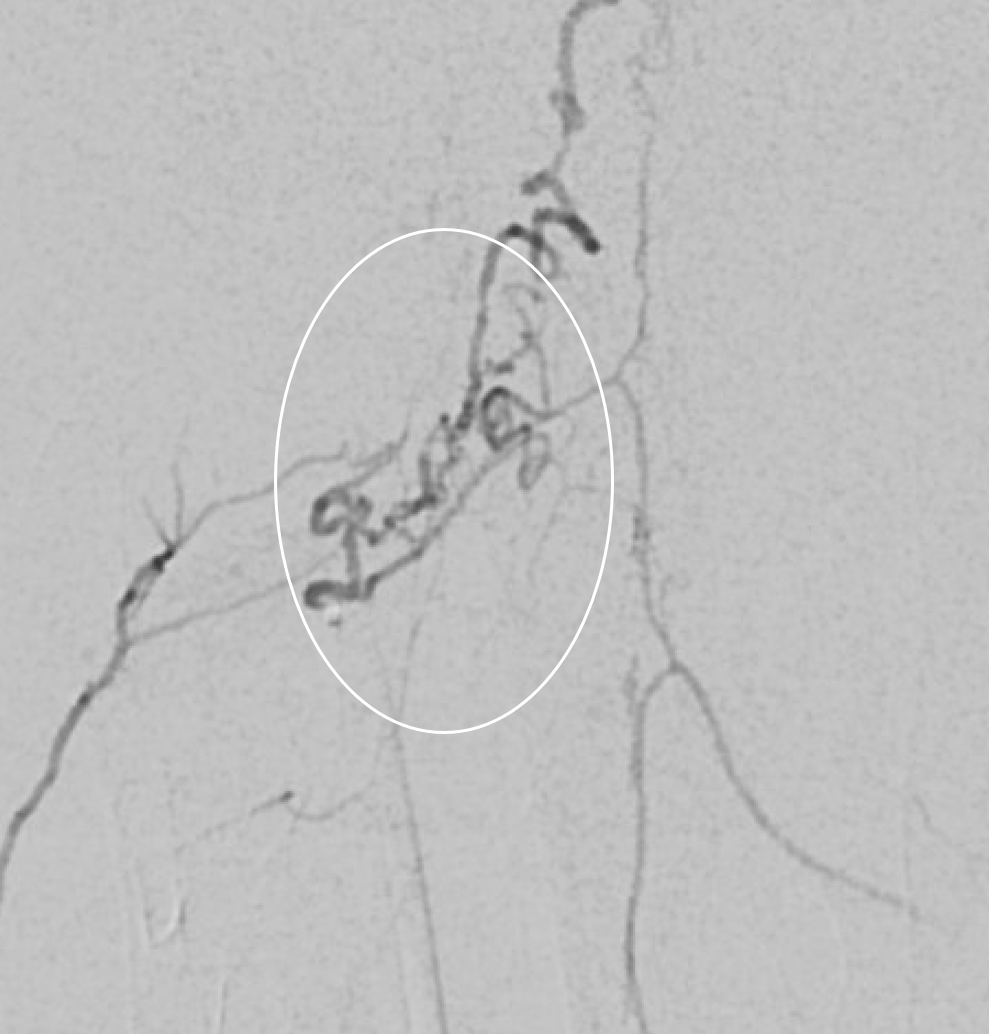 Here it is on VR images.  What is this strange-looking branch off the radiculomedullary artery?  Anything to be concerned about? 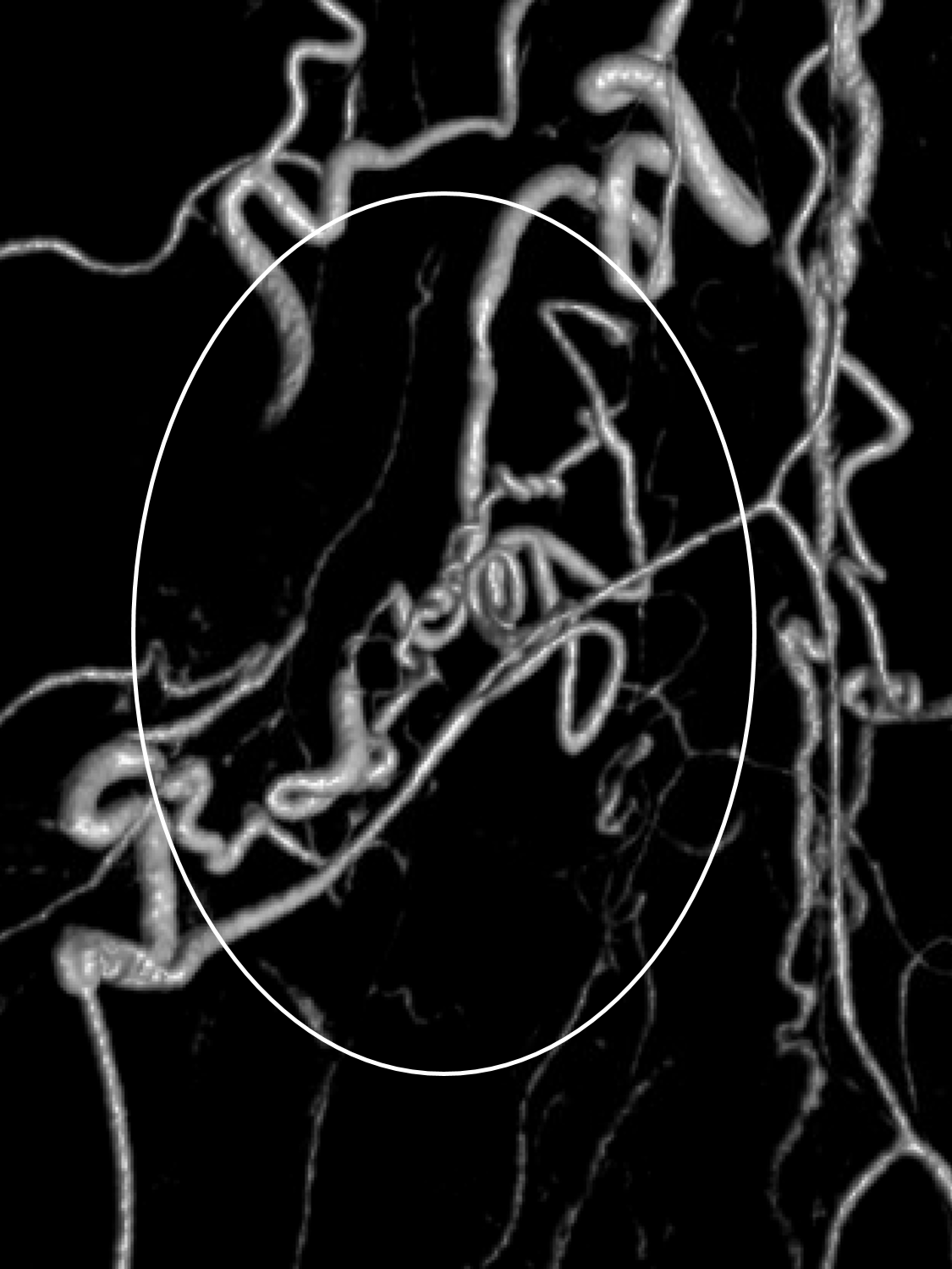 Here you really need stereos, or the movie to figure it out.  I would say its practically impossible to understand this on DSA.  Go back and look before reading the answers below 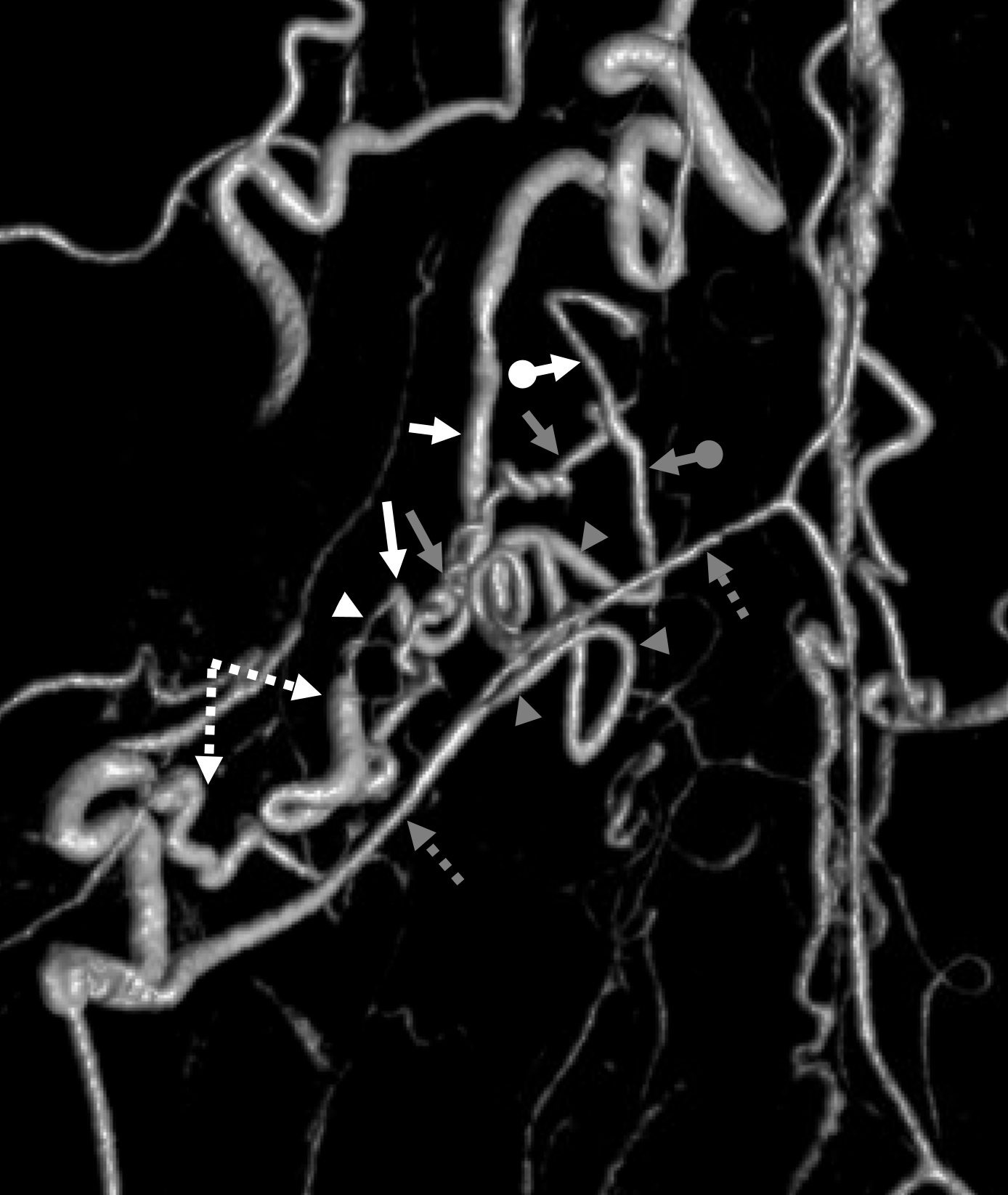 The answer is as follows.  The major dorsal nerve root artery branch supplying the fistula is dashed white arrows.  The radiculomedullary artery (dashed gray arrows) is more than just radiculomedullary.  The strange branch (gray arrowheads) is a vasocorona branch (artery on surface of cord). Its vertical segment (ball grey arrow) retrogradely supplies the fistula via the radiculopial branch (gray arrows).  Both this retrograde radiculopial supply and dorsal nerve root supply converge on a stenotic common channel (white arrowhead) which is the actual fistula site.  The proximal radicular vein is labeled with white arrows.

This analysis has several implications.  First, the fistula is still dural, not pial. Second, the fistula is a single hole between artery and vein — as nearly all spinal dural fistulas are (remember that when you really understand something, its often quite simple — at least in vessels).  Third — if you ever were to be bold enough to try to wedge into the dorsal nerve root branch and inject liquid embolic with goal of closing the fistula, this additional connection to the anterior spinal system may become a major issue.

This remains a surgical case.  The detailed understanding of anatomy allows for optimal surgical planning.