A rare application of test occlusion technique is in the spine.  Sometimes, a question comes up if supply to spinal cord can be sacrificed for preoperative or other purposes.    Will collateral support be available?  The answer is to consider a spinal artery test occlusion.  How is this done?  Same as brain — inject potential collateral routes while temporarily occluding the target vessel. 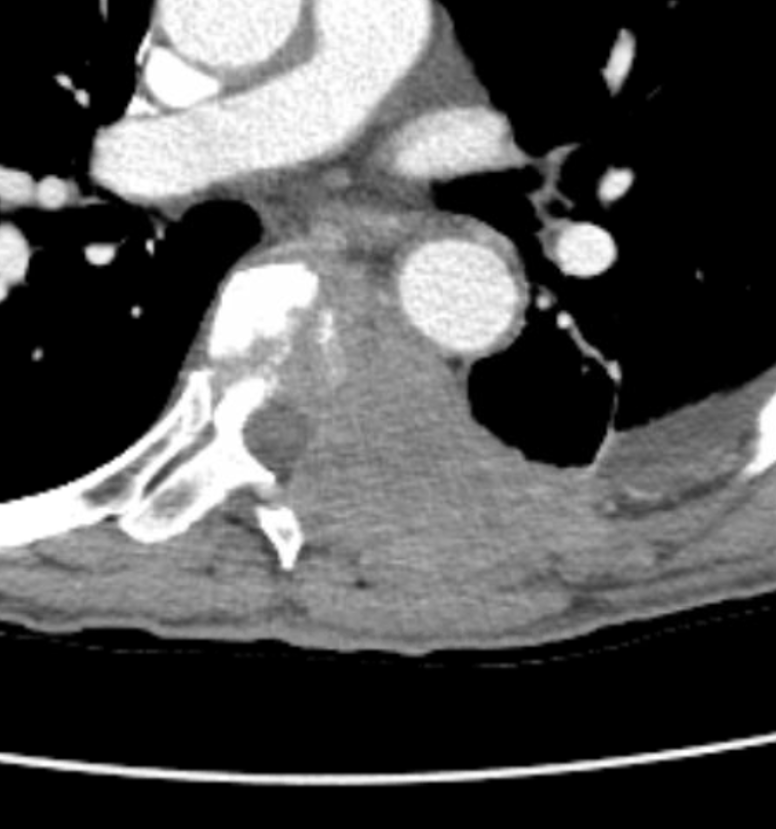 Fairly large cord supply (for thoracic spine)  to both ASA (arrow) and PSA (arrowhead)  from right T6  — a “radiculomedullopial” artery — the radiculopial component is labeled with dashed arrow. 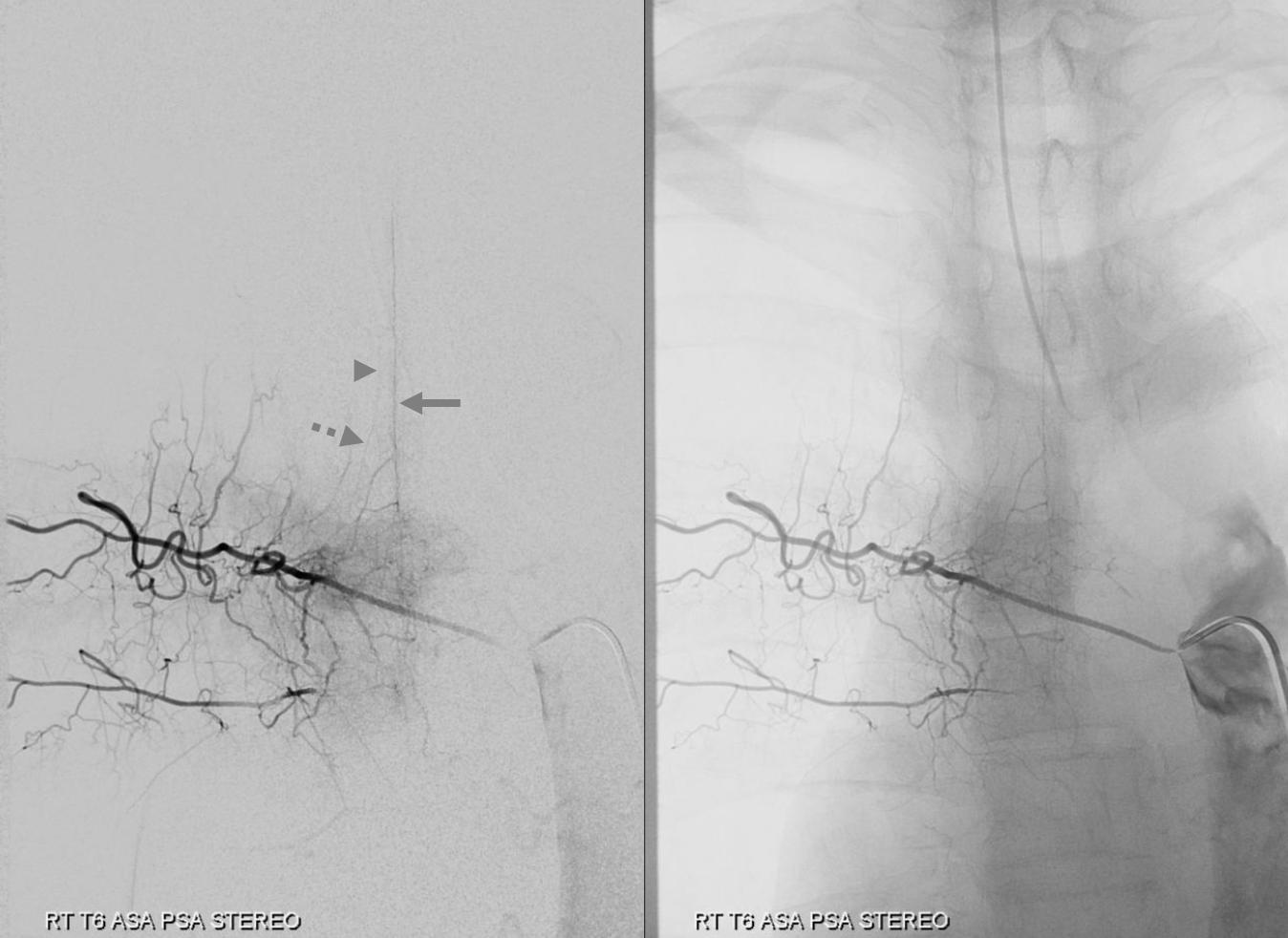 Very large posterior spinal artery supply also happens to be from the surgical target left T6 segmental artery.  Radiculopial is arrow, and there are two posterior spinal channels on the left (dashed arrows) 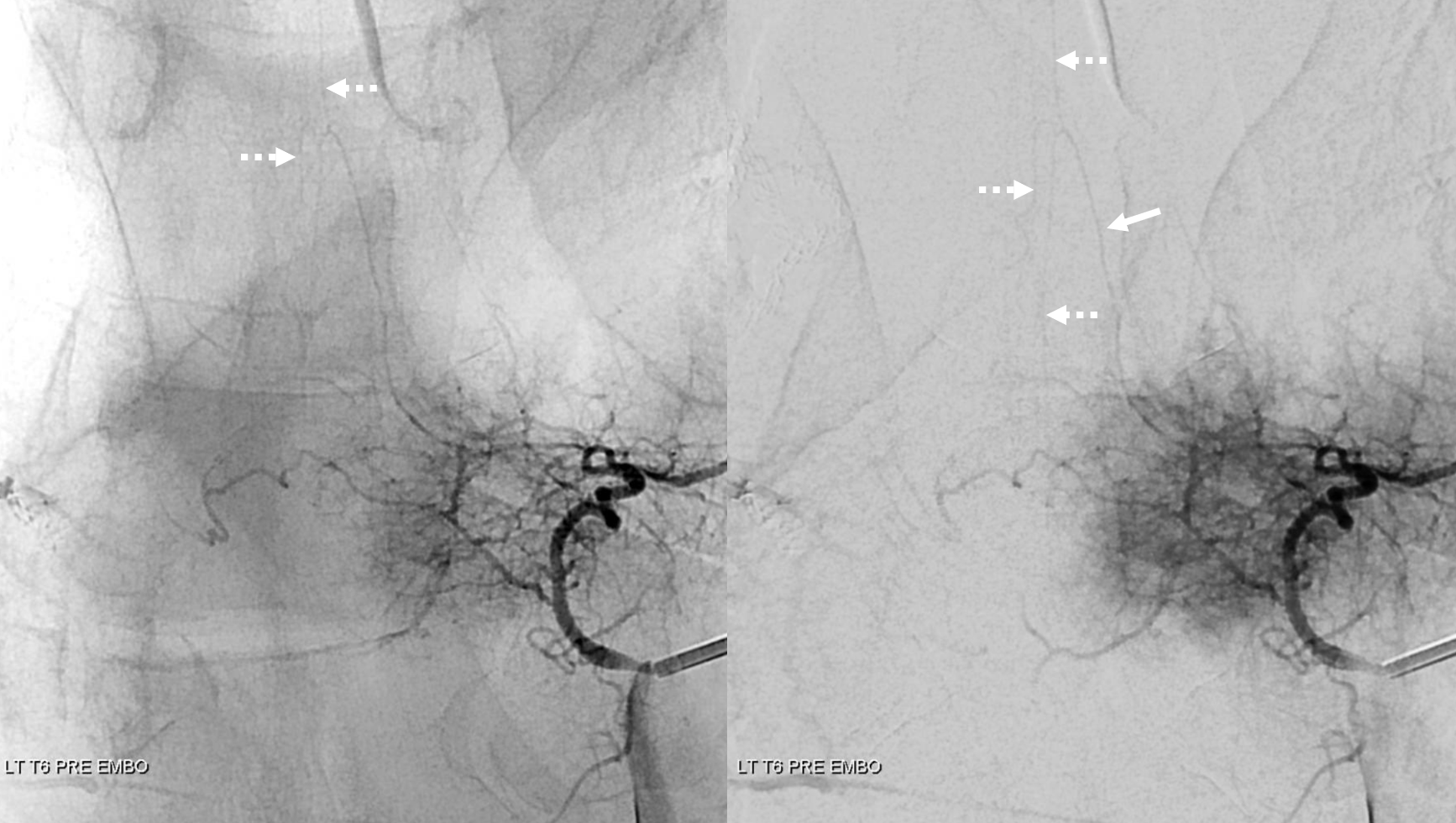 A classic Adamkiewicz with a nonclassical right sided location — just for kicks…. 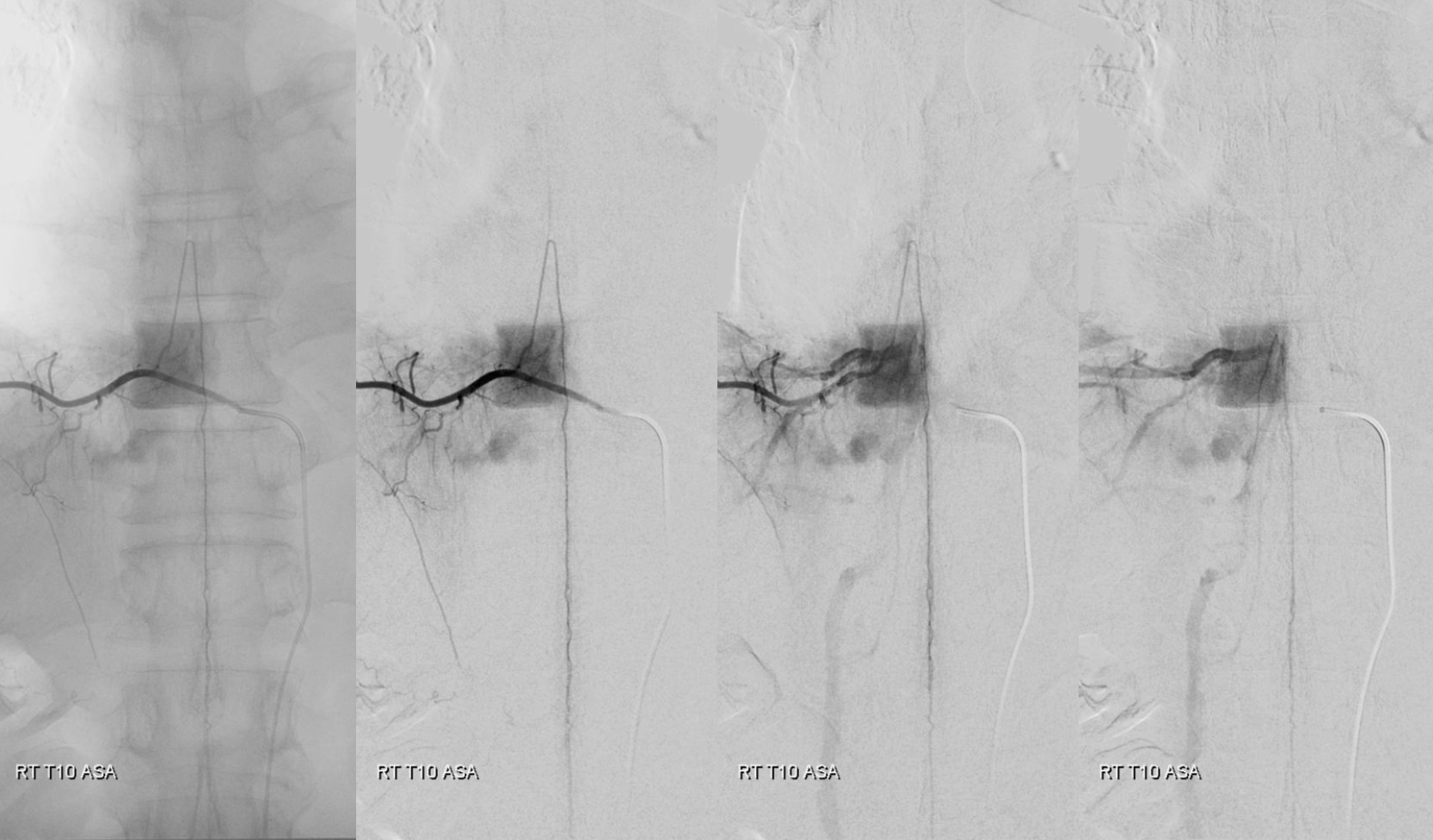 Now that we have DYNA capabilities, there is a whole lot more we can see in spine!  Check out this beautiful right T6 DYNA of the ASA/PSA 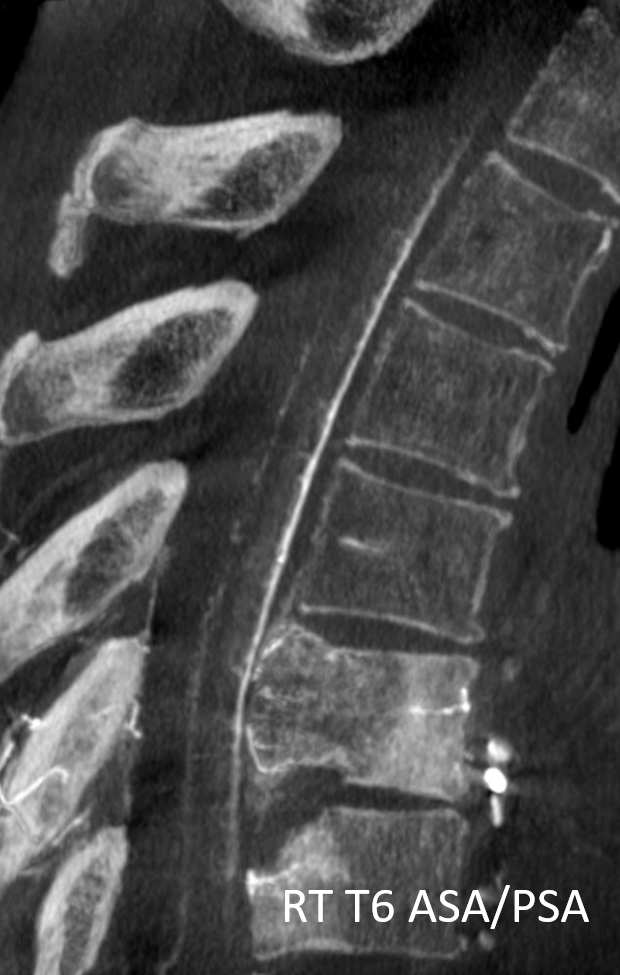 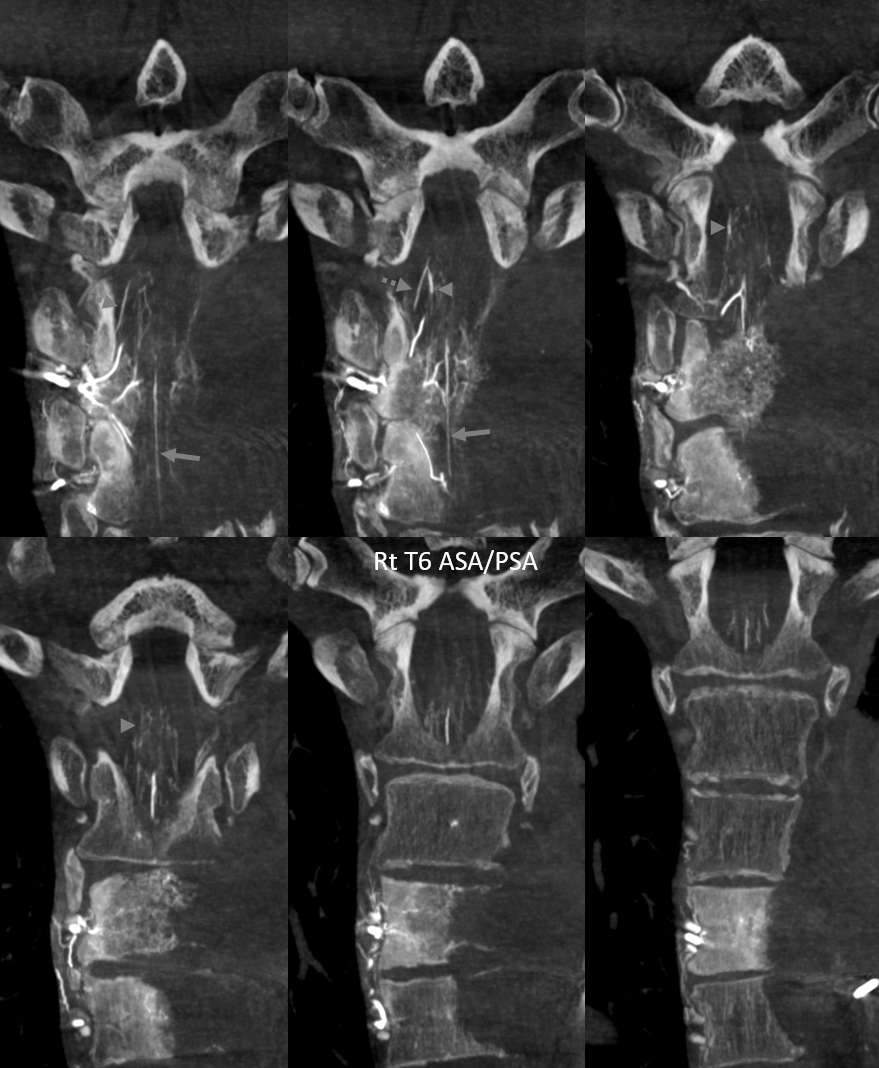 DYNA of the LEFT T6 PSA level — its a lot of cord supply, right? 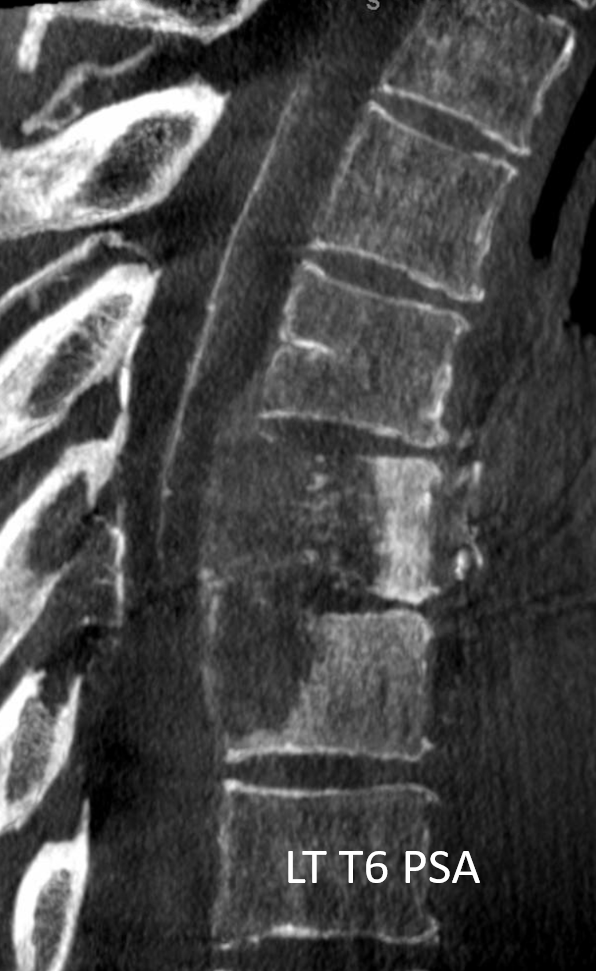 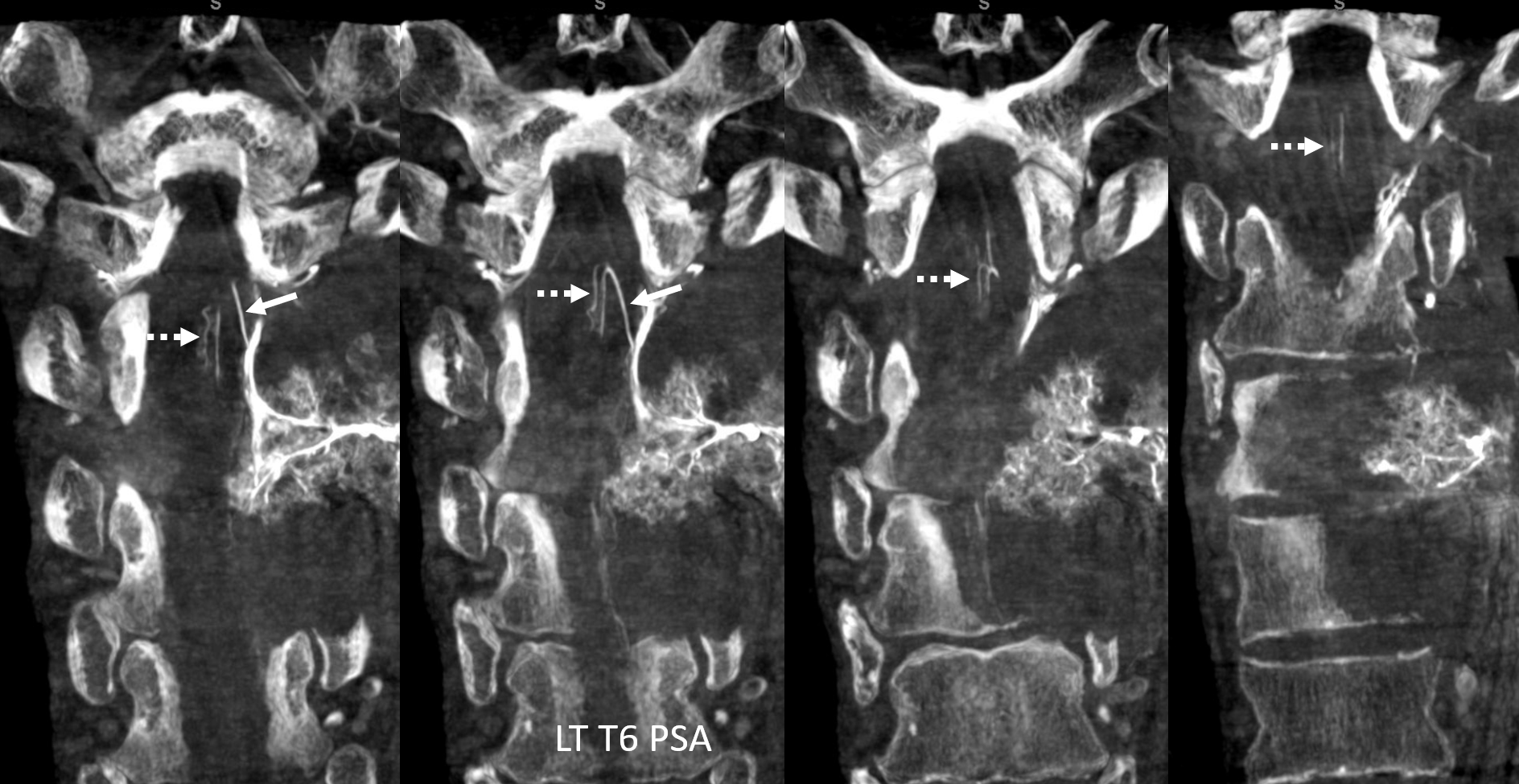 What to do?  Can the left T6 radiculopial artery be sacrificed?  How can embolization be done?  Change surgical plan? 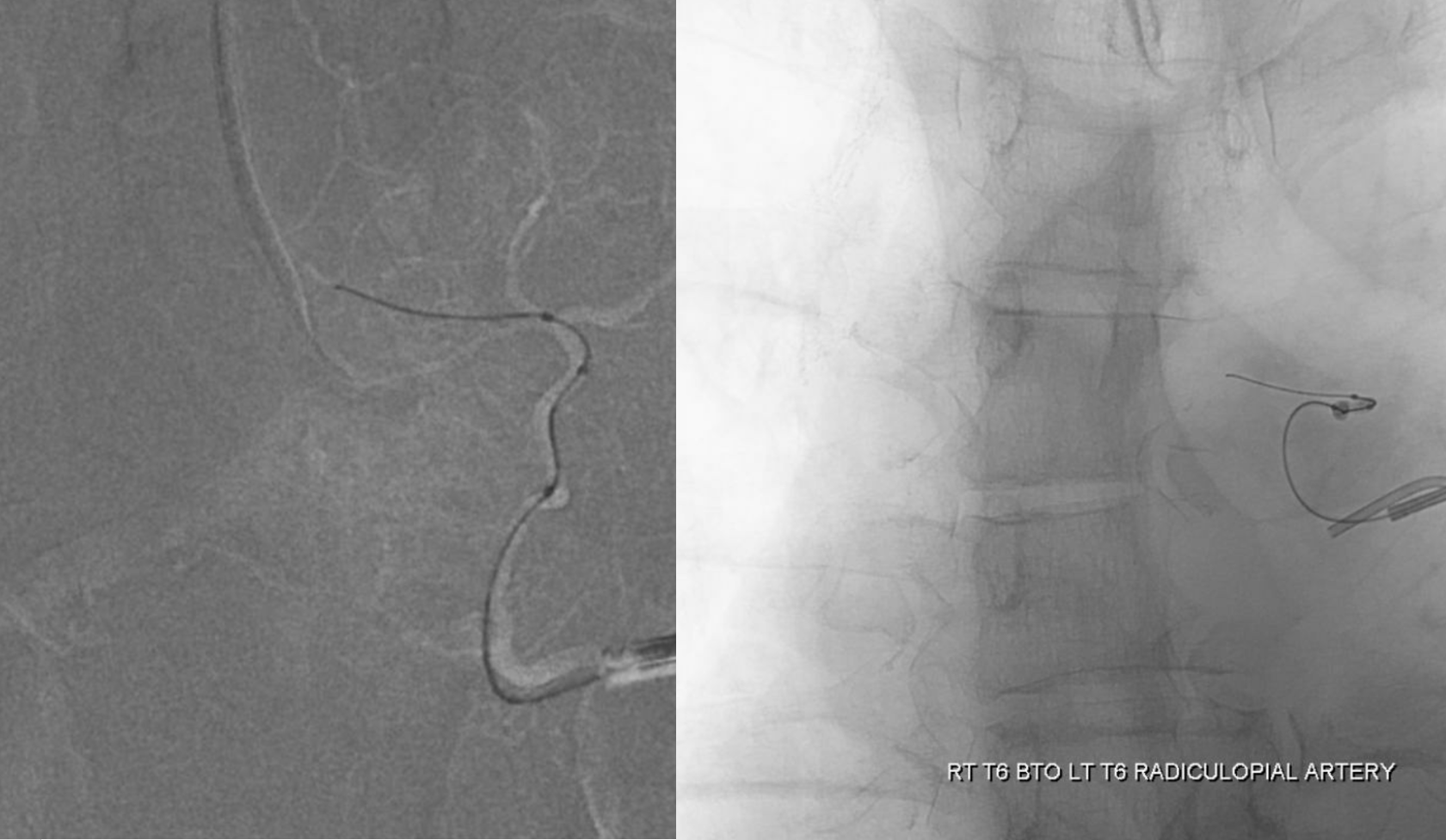 Next, we inject the right T6 — the left radiculopial artery is reconstituted to the level of the nerve root (white arrows).  We judge this to be a “pass”.

Notice that it takes a while — there are lots of veins by the time we see the radiculopial fill lower down. There is no criteria — its a judgement call.   The patient is under general anesthesia.  We strongly feel that this is the way to go — an awake spinal test occlusion, given the caliber of vessels that need to be seen, is ill-advised.  Monitoring is also not our choice — its too cumbersome, and paralytics can’t be used.  Besides, in this case, the risk is sensory.  Finally, you never know when this will be necessary to set up monitoring in advance.  But, you can skin your cat your own way…

Now we coil off the radiculopial artery (arrow) and another prevertebral anastomosis that threatened to send particles to the right T6 (dashed arrow), as well as the intercostal artery (coils on right image, no arrows).  PVA Contour particles are then used for the isolated tumor supply (right image) 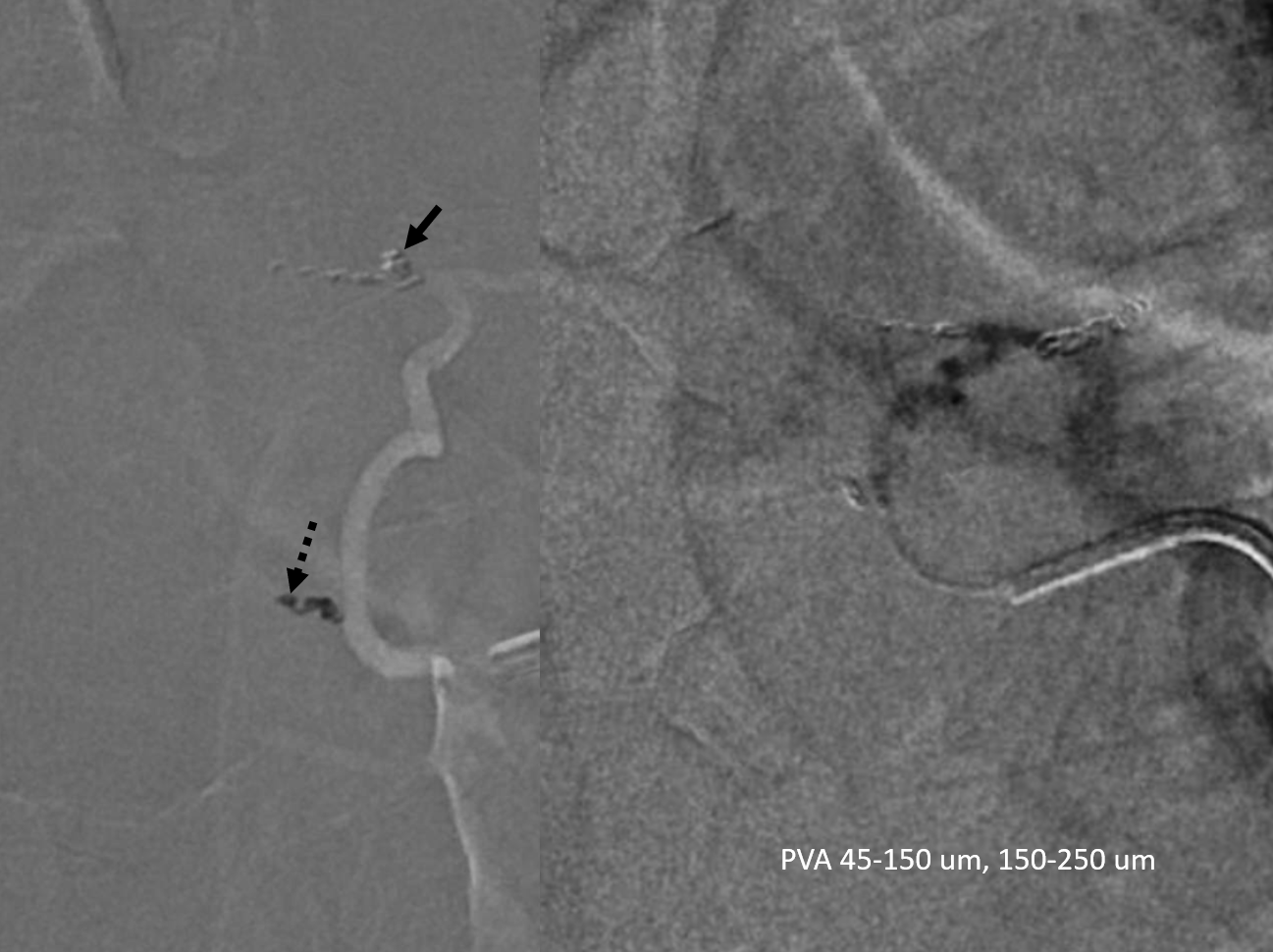 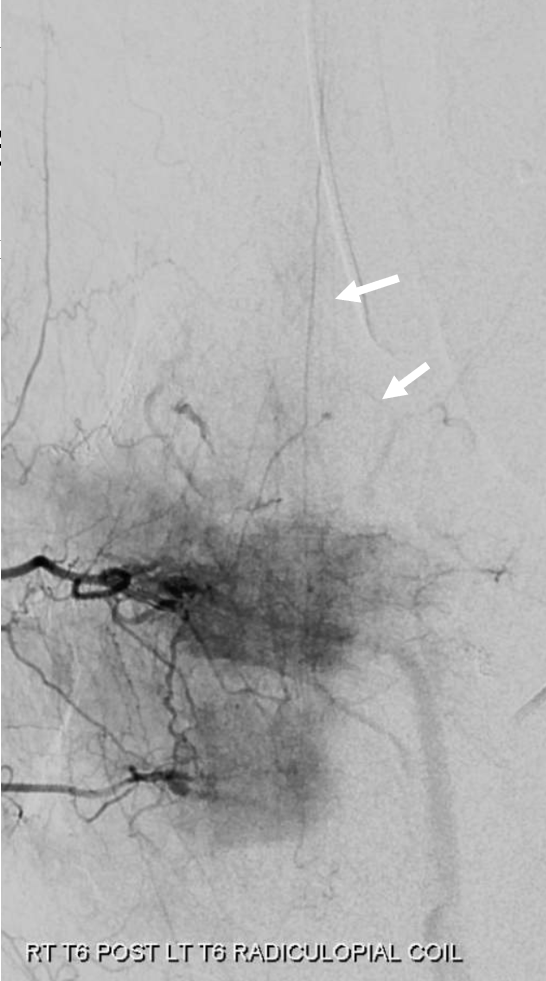 A final RT T6 DYNA is on left, pre-LT T6 sacrifice on right.  See how more posterior cord vessels are showing up? 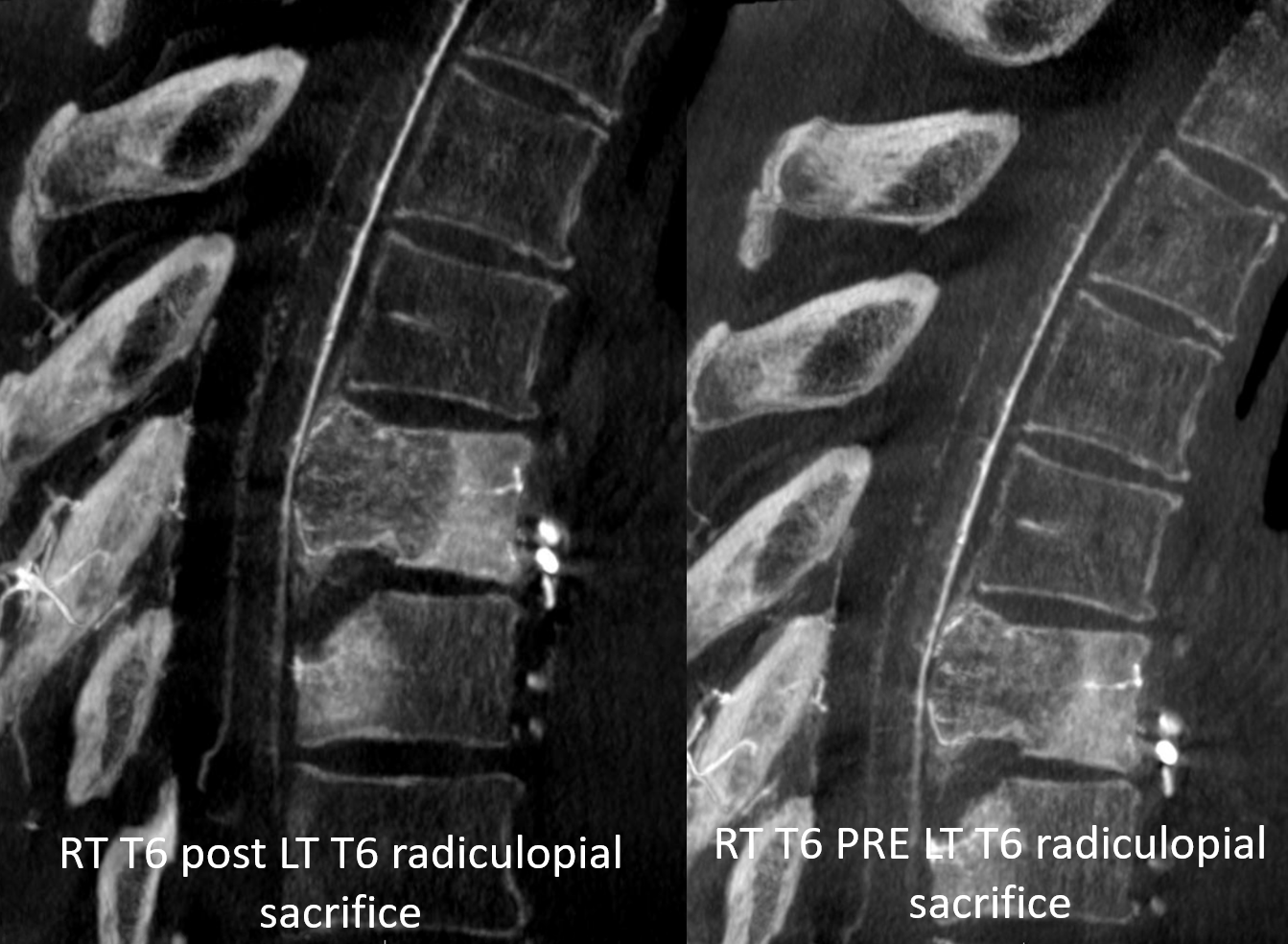 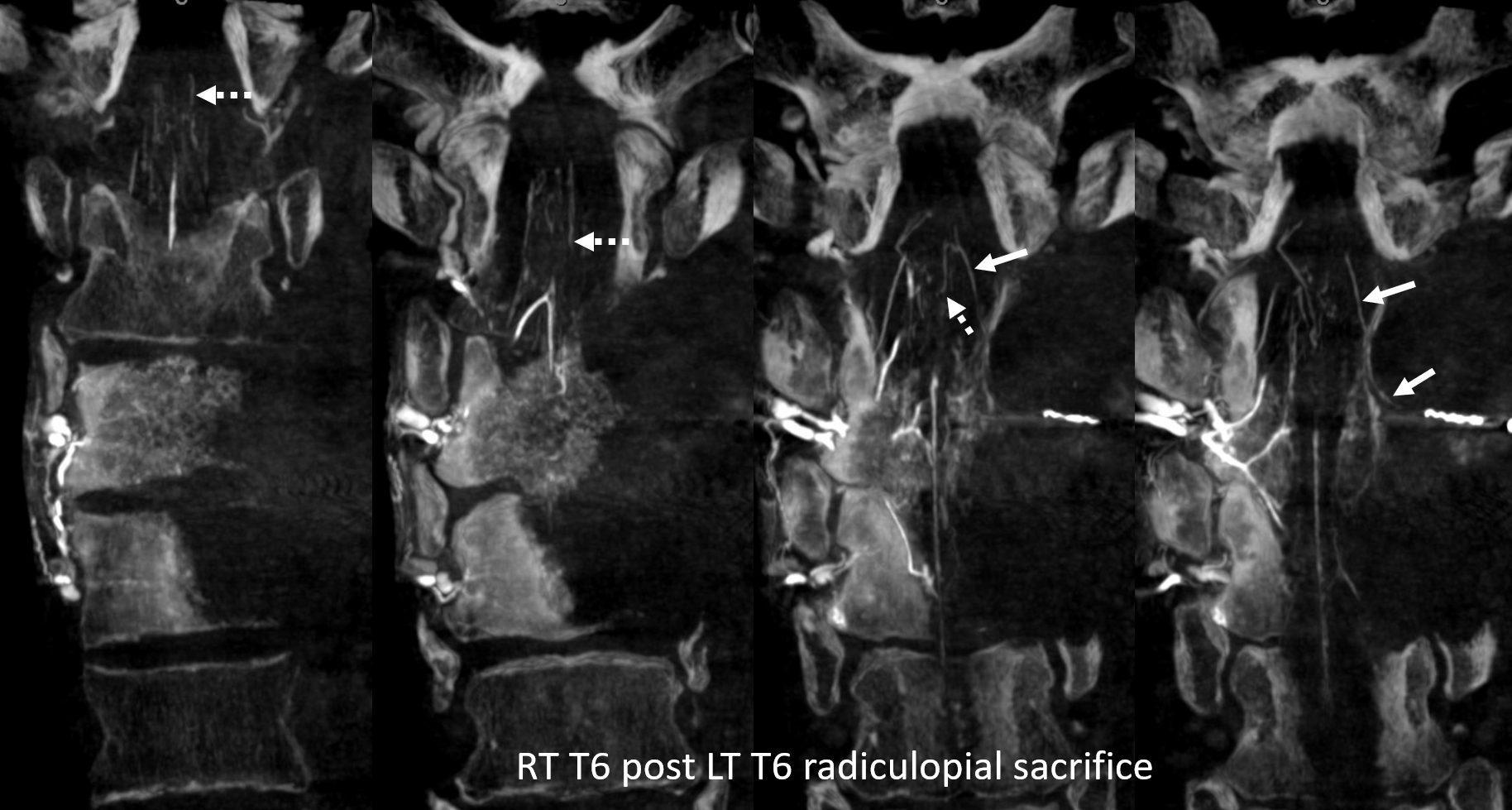 Is this whole production necessary?  Why not just take the left T6 because it is radiculopial?  The tumor is not so bloody, maybe there is no reason to embolize? Maybe.  This is a matter of strategy.  Maybe its best just to operate without angio at all?  Yes, most of the time, it will be fine.  Cases like these are rare. However, postop spinal disasters are not too rare — and in many of those its unclear what went wrong.   With evolving vascular techniques and equipment, we can do better.