Another unusual stroke case from neuroangio.org.  A young patient with right MCA syndrome last known well about 2 hours prior, before transfer. 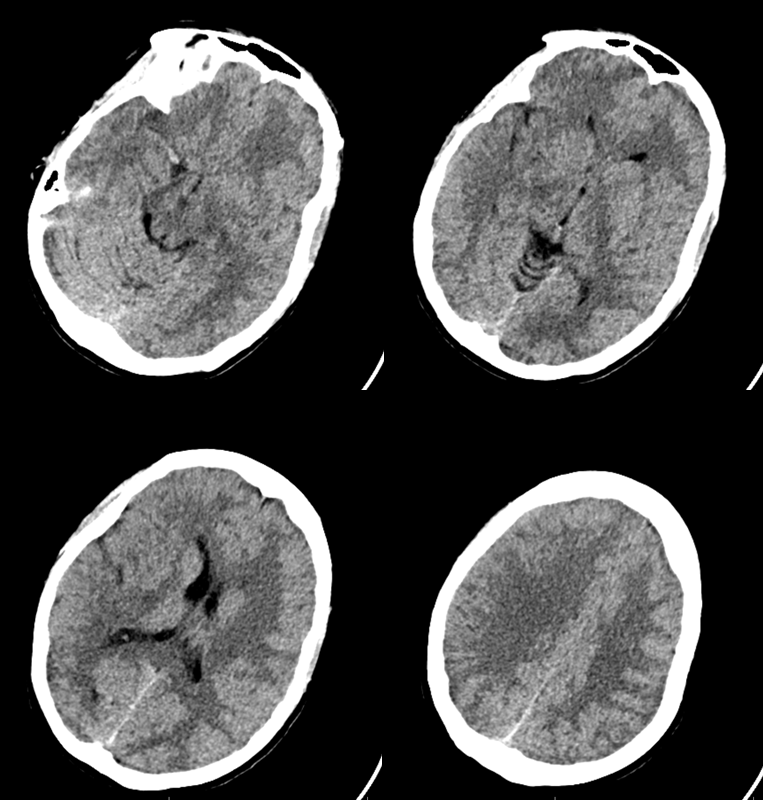 After transfer (2 hours transfer time), therefore 4 hours after last known well.   Again, time is a surrogate.  Collaterals is brain.  This one seems to have had none.  Very unusual given young age. 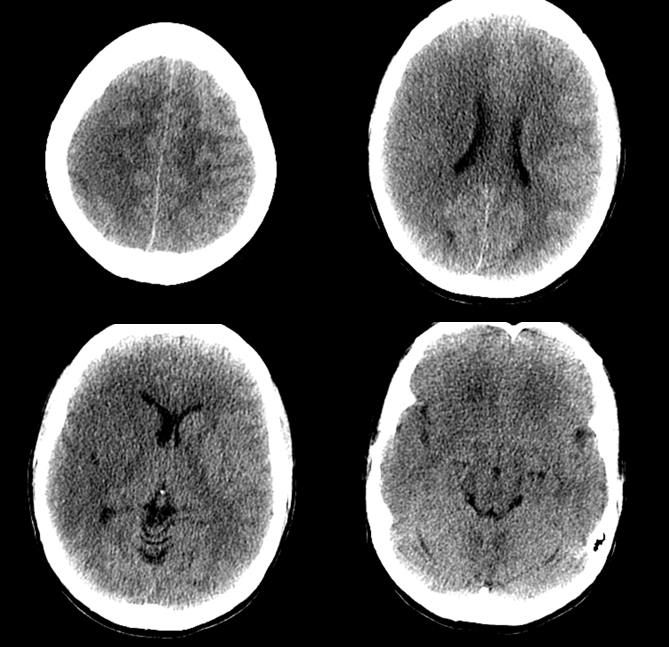 Perfusion — unlabeled.  either one could be CBF or CBV (CBV is on top).  Time to go back home, right? 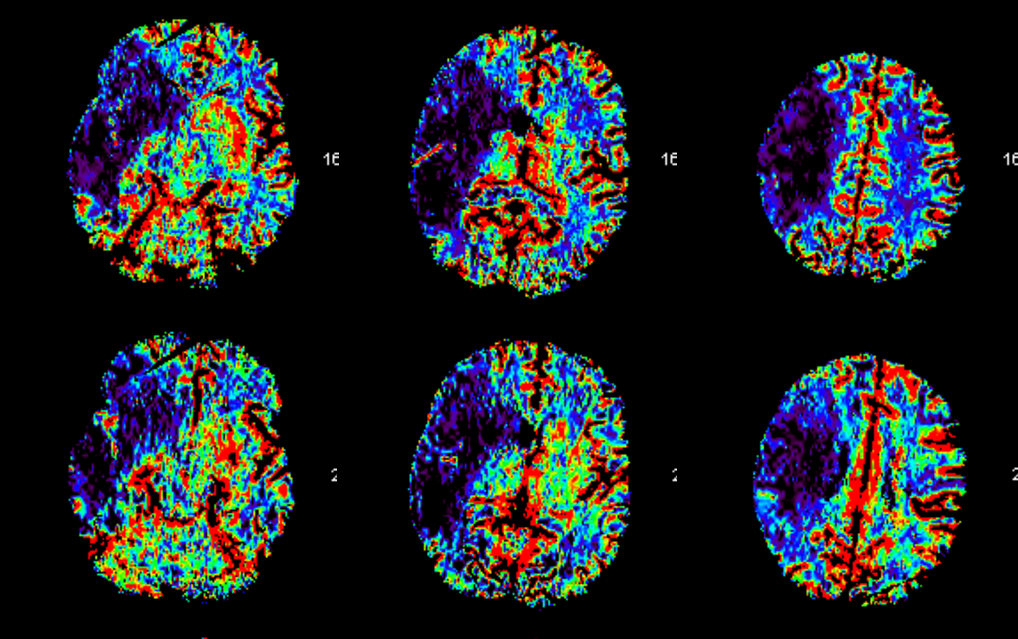 CTA MIP image.  Can you see the problem? 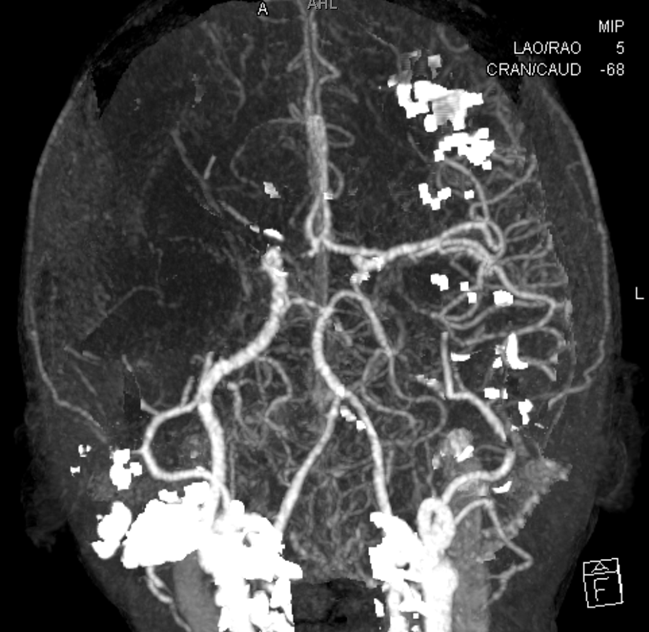 Source images.  The right carotid is occluded at the terminus.  The left carotid is closed also!  Where — CTA can’t tell. There is reconstitution beyond the ophthalmic segment but it looks like there is clot across the ophthalmic ostium also 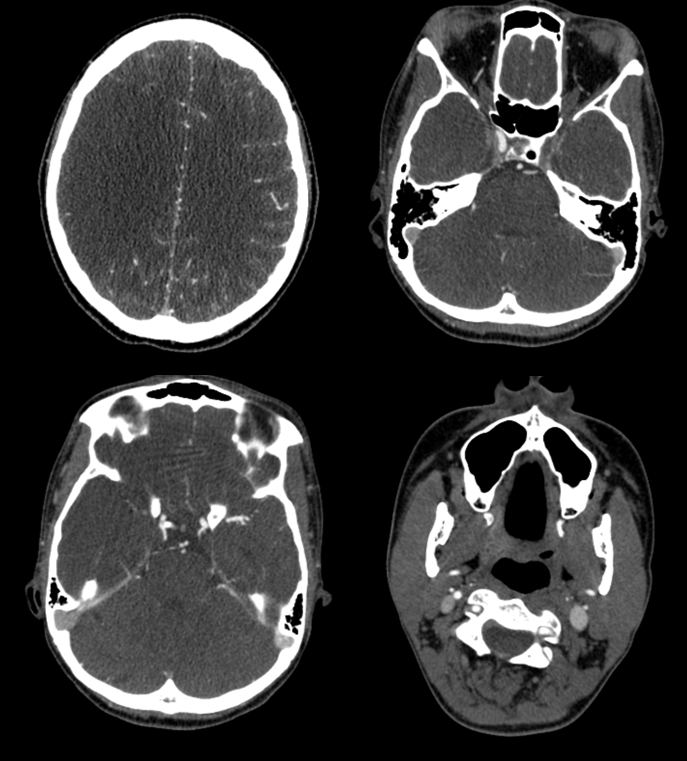 Now we have to angio.  Right PCOM is still alive.  The clot is just beyond the anterior choroidal. 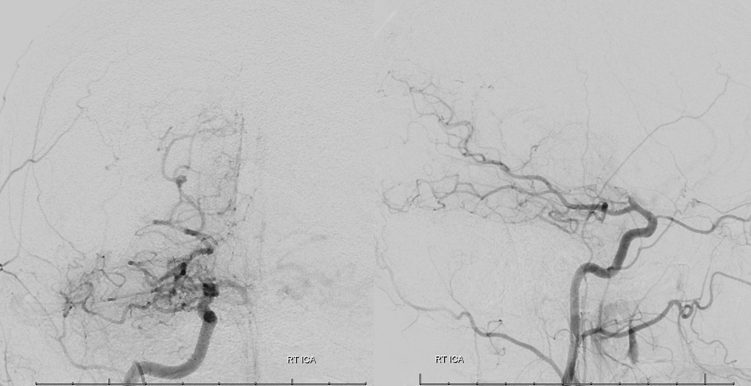 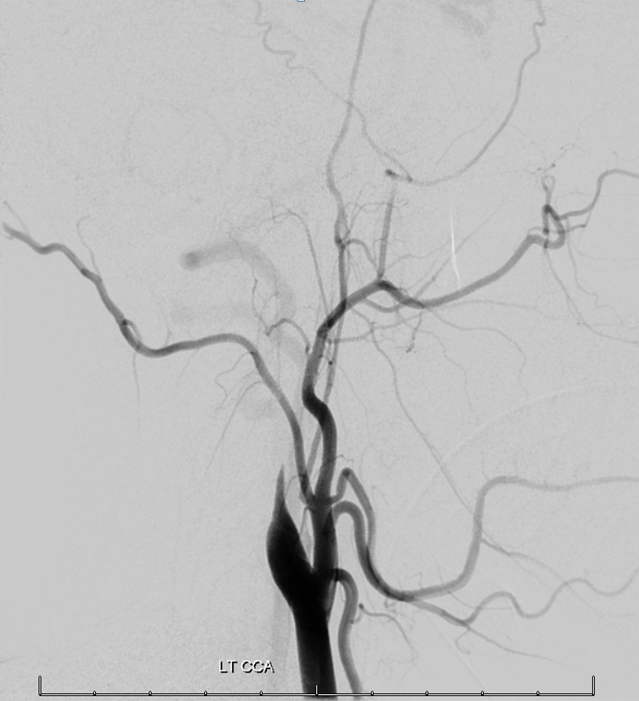 Left CCA.  The ophthalmic (white arrow) is not helping. Which means the embolus is at the ostium 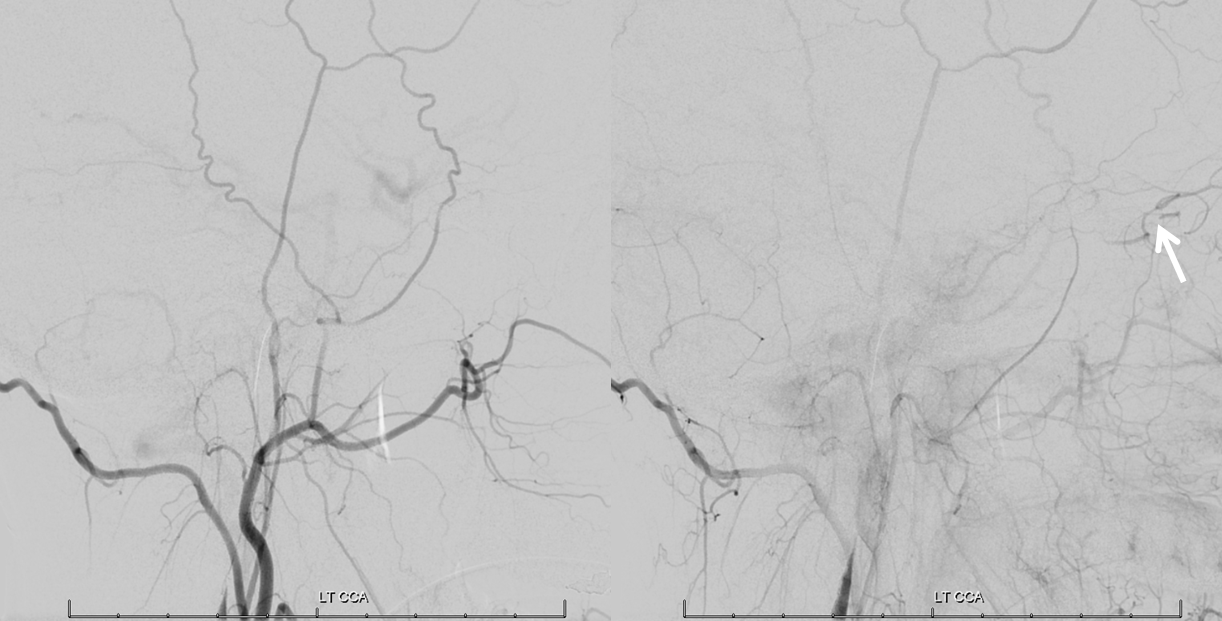 Left vert. Money shot.  The entire left hemisphere and the right ACA are all supplied by the left PCOM.  This explains the quick death of the right hemisphere — the patient likely had leptomeningeal collaterals.  However these could not be fully recruited given that the left hemisphere was marginally perfused via the PCOM.  Notice significant delay in contrast transit time between the posterior and anterior circulations.  Looks like we have to bit the bullet and proceed with left ICA thrombectomy.  Risk is high, of course, as any distal embolus can be devastating, but given the perfusoinal status it looks like there is not much choice 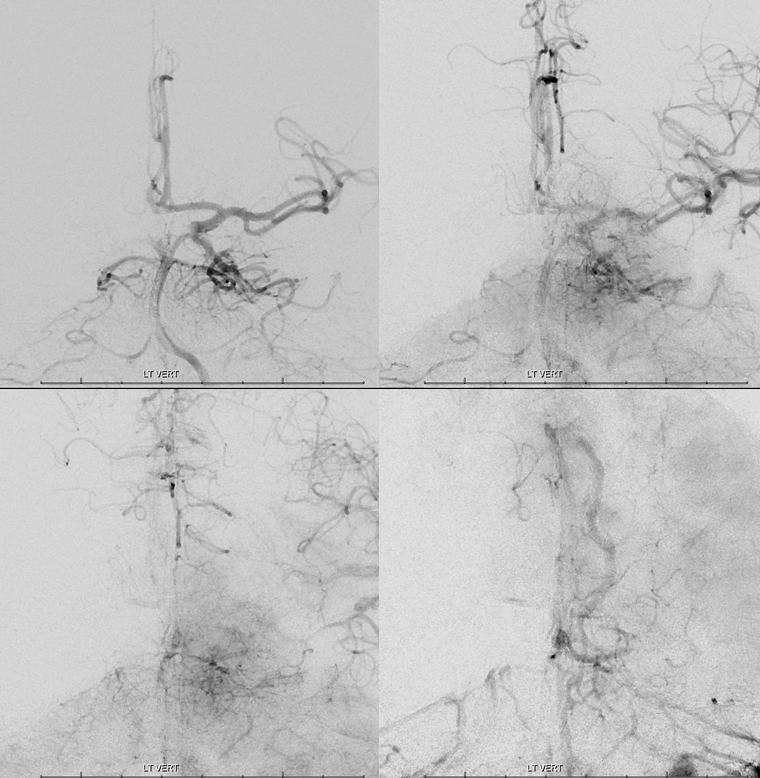 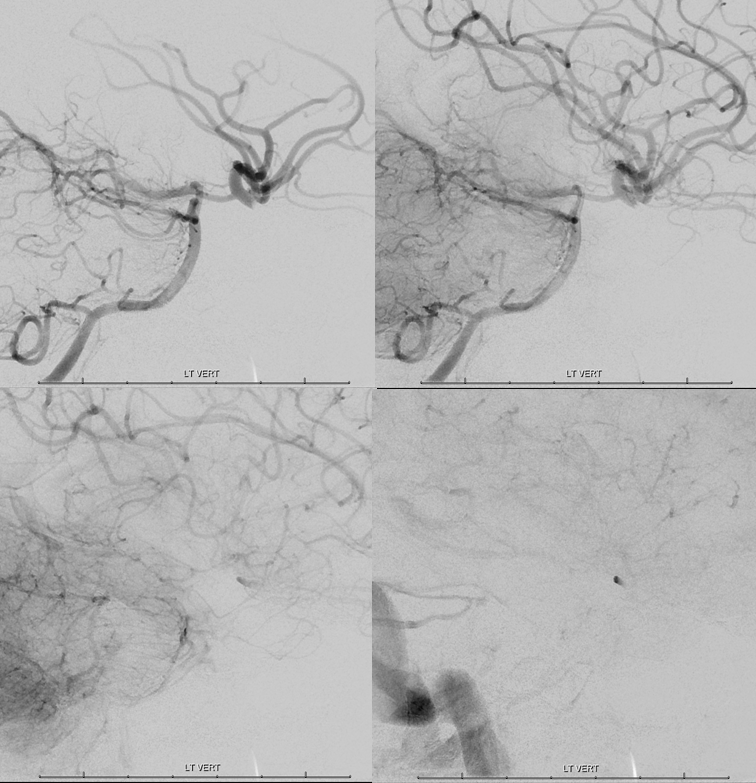 First comes the Solitaire 4×40 with a Flowgate balloon inflated in the proximal left ICA.  Image at the left is post-Solitaire — TICI 0 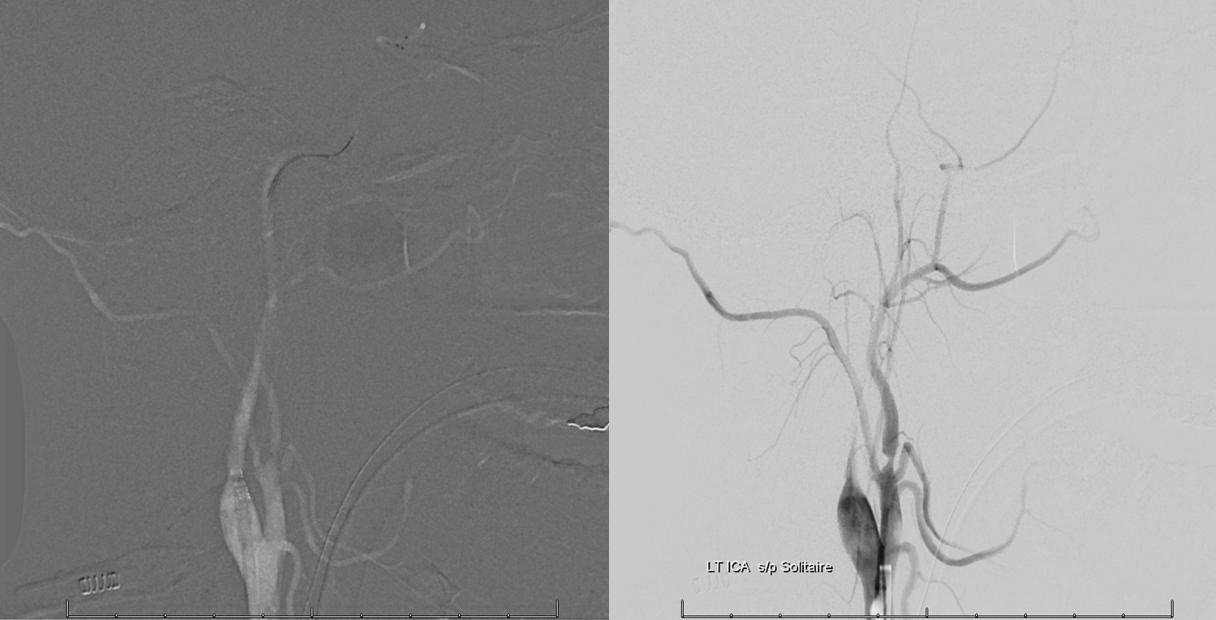 Next is ACE68 — Sofia 6 does not fit into the Flowgate.   Notice how the Ace migrates forward under slight forward tension as it engages the clot. 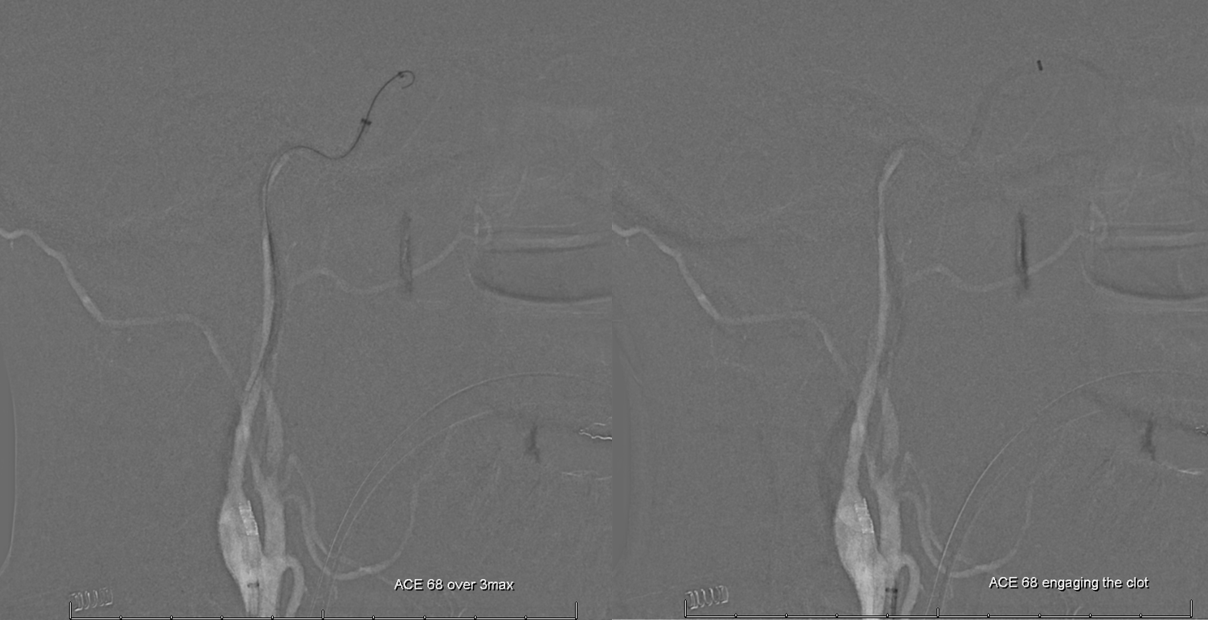 We had the Flowgate inflated all the time during and after the ACE68 aspiration.  Result is technically a TICI3, right!  Except for all the residual clot which is still stuck to the carotid.  Mercifully, it was quite sticky. Notice also some pretty severe supraclinoid spasm — a common problem with young patients. 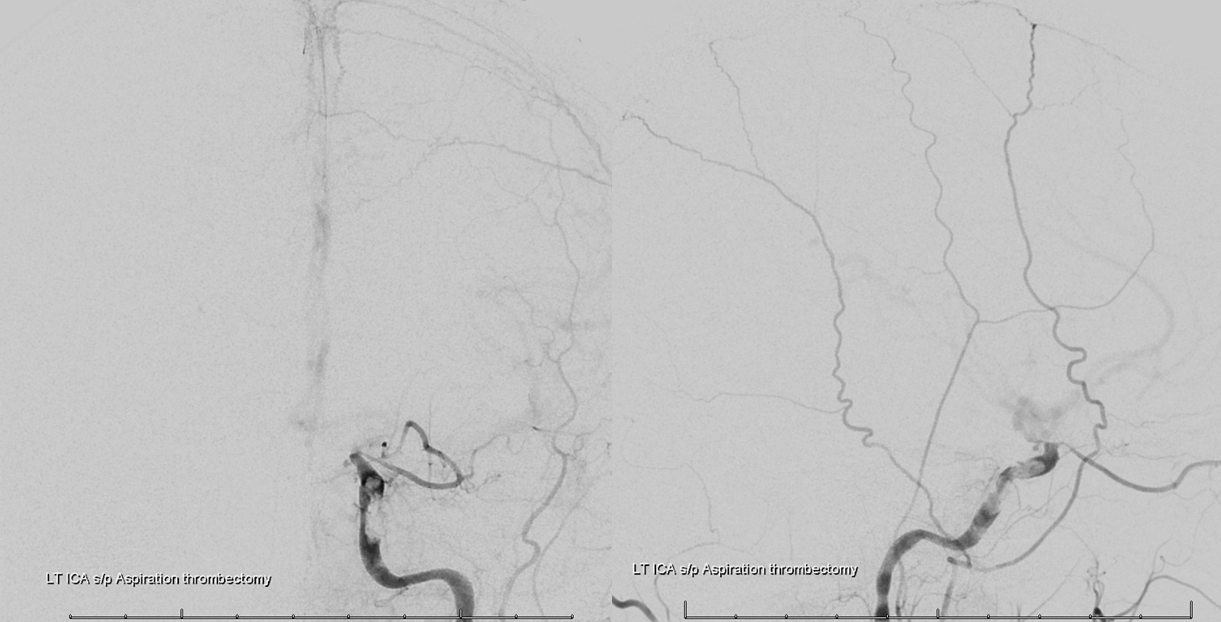 So, why not go Solumbra from the get-go.  Got both 4×40 Solitaire and Ace 68 (white) in there now, with Flowgate balloon (black) still up.  Maybe we can put a Merci there somewhere also 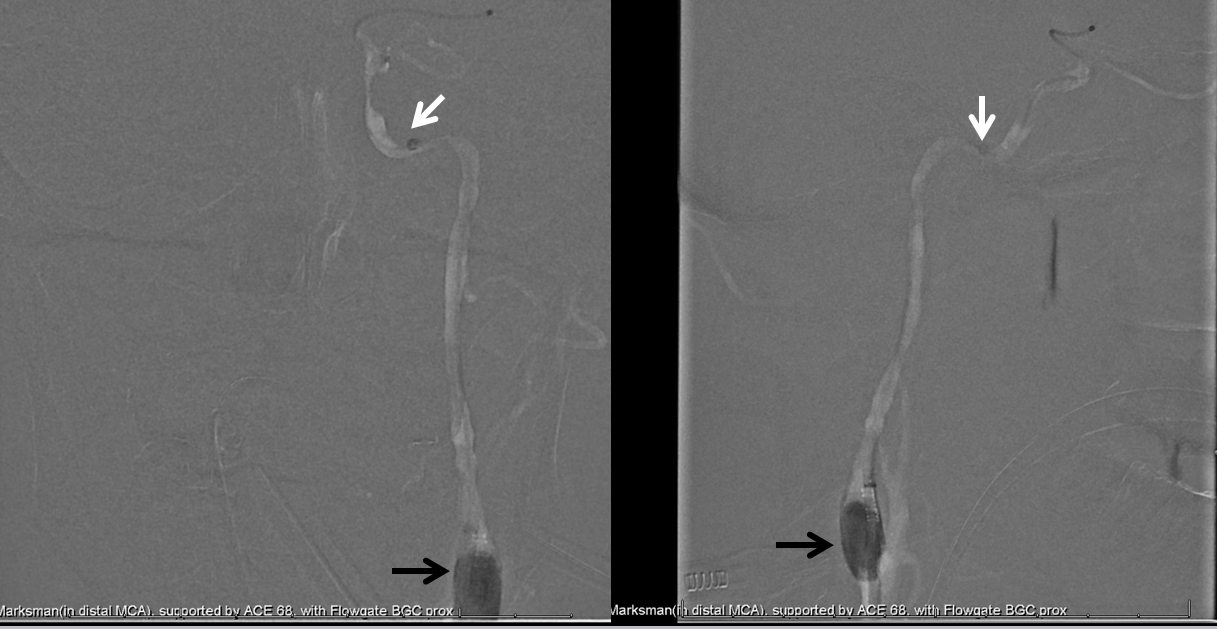 Finally.  Except for the tremendous supraclinoid and distal cervical spasm, things look good 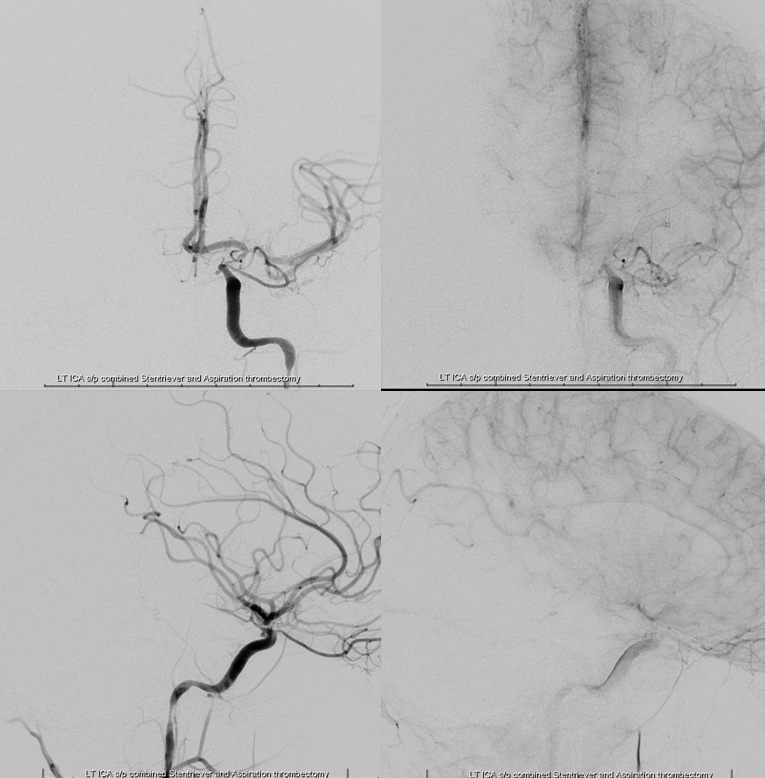 So we gave 3 mg of IA verapamil and waited 10 minutes.  A solid TICI 3 now 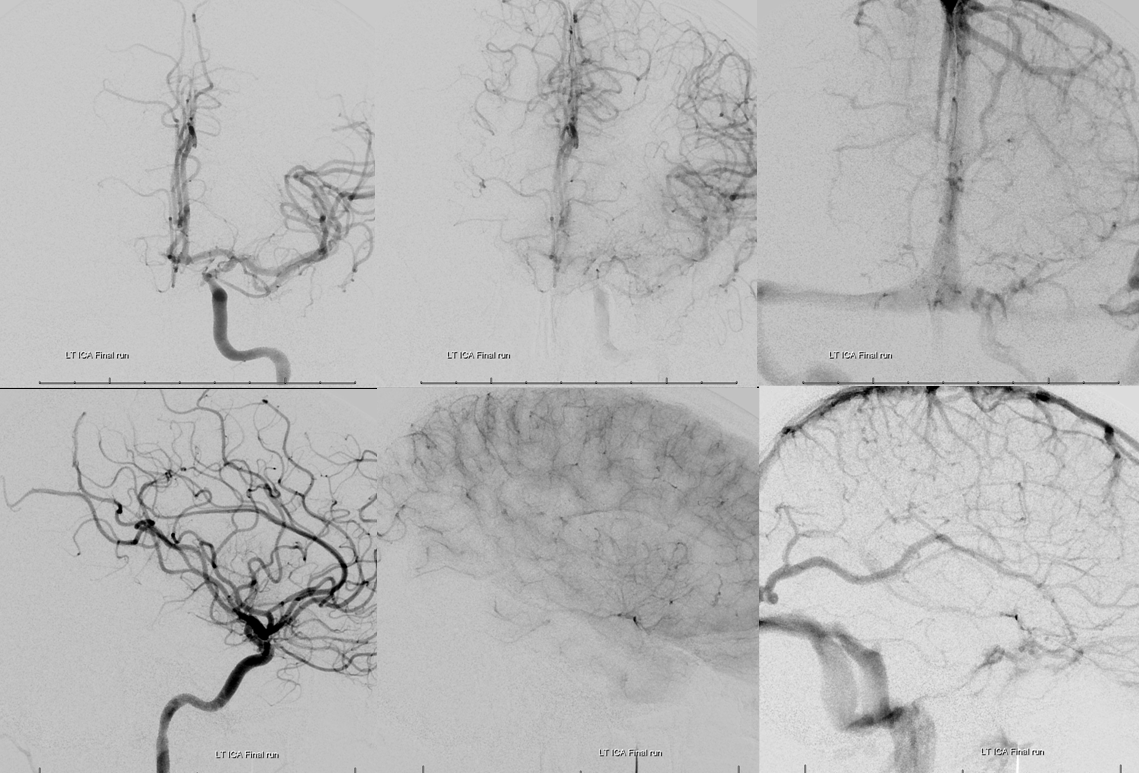 3 days later, CTA to make sure left side is still OK.  The hemicraniecromy was done 12 hours after the stroke — still, this was too long to wait on this certain hemicrani candidate. 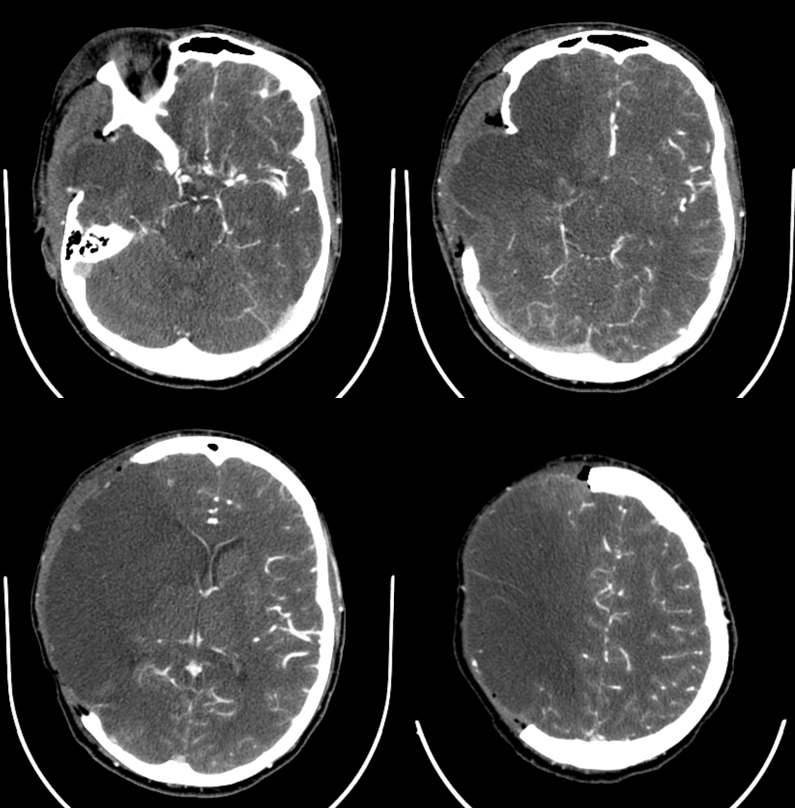 Here is the embolus.  A weird rubbery consistency, unusual looking.  At this point we didn’t know this was going to be a dish of chewed up mitral valve liberally garnished with gram-negative rods 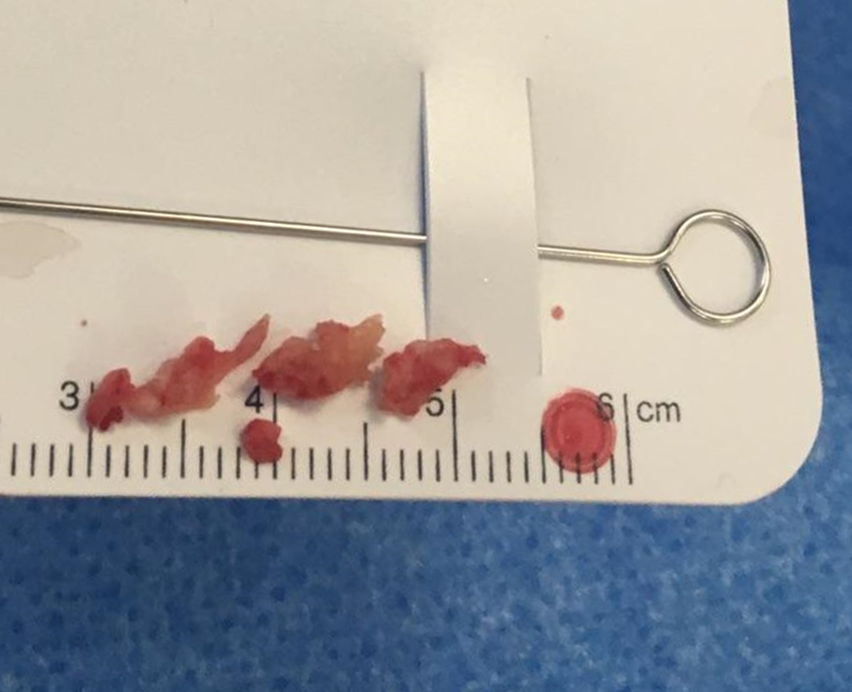 Key points are again — understanding collaterals is understanding pretty much everything there is to know about acute stroke.  Between perfusion and angio we come to understand why leptomeningeal collaterals could not be recruited in this patient and why it was necessary to take a chance with left ICA thrombectomy in a patient with a dead right MCA territory.