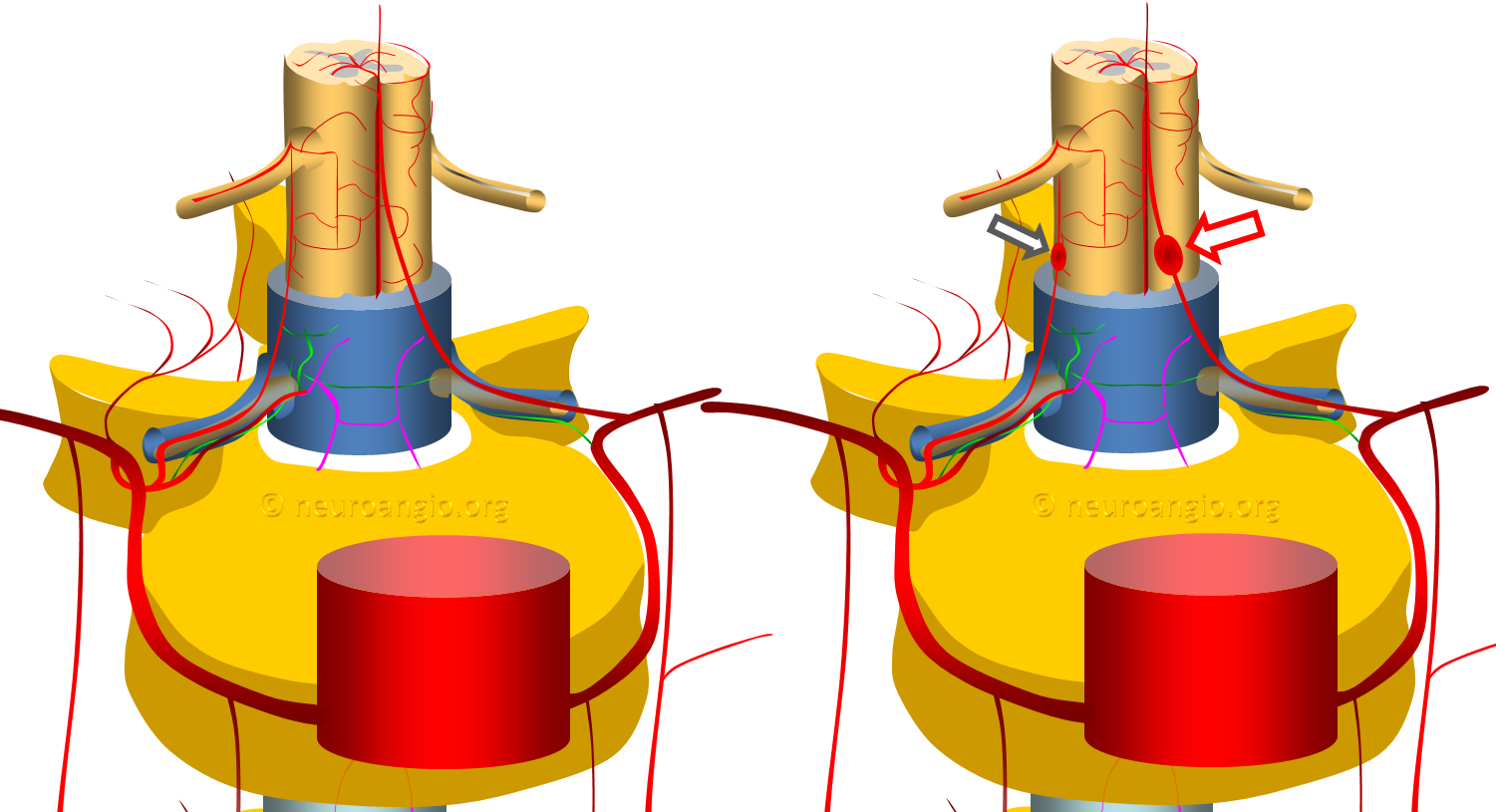 The vast majority are fusiform, likely dissecting, aneurysms of the proximal intradural portion o the radiculomedullary or radiculopial artery.  The former is an artery which supplies the anterior spinal arterial system, the latter supplies posterior spinal system.  See Spinal Arterial Anatomy page for more information.  Why they form is unknown.  The theory is that these are dissections, originating at the point where these arteries pierce the dura.  The diagram above shows normal anatomy (left) and one with typical radiculomedullary (red arrow) and radiculopial (black arrow) aneurysms

Here is an angiographic picture of a typical radiculomedullary artery aneurysm 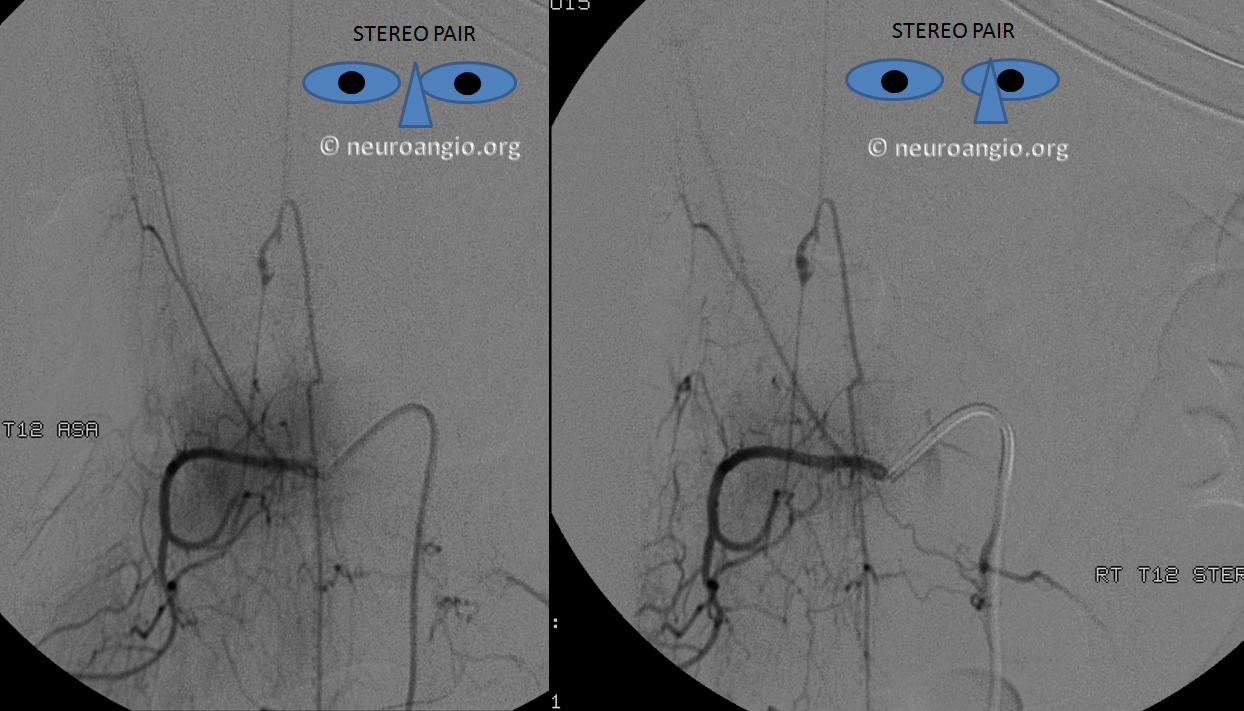 Here is one of a typical radiculopial artery aneurysm 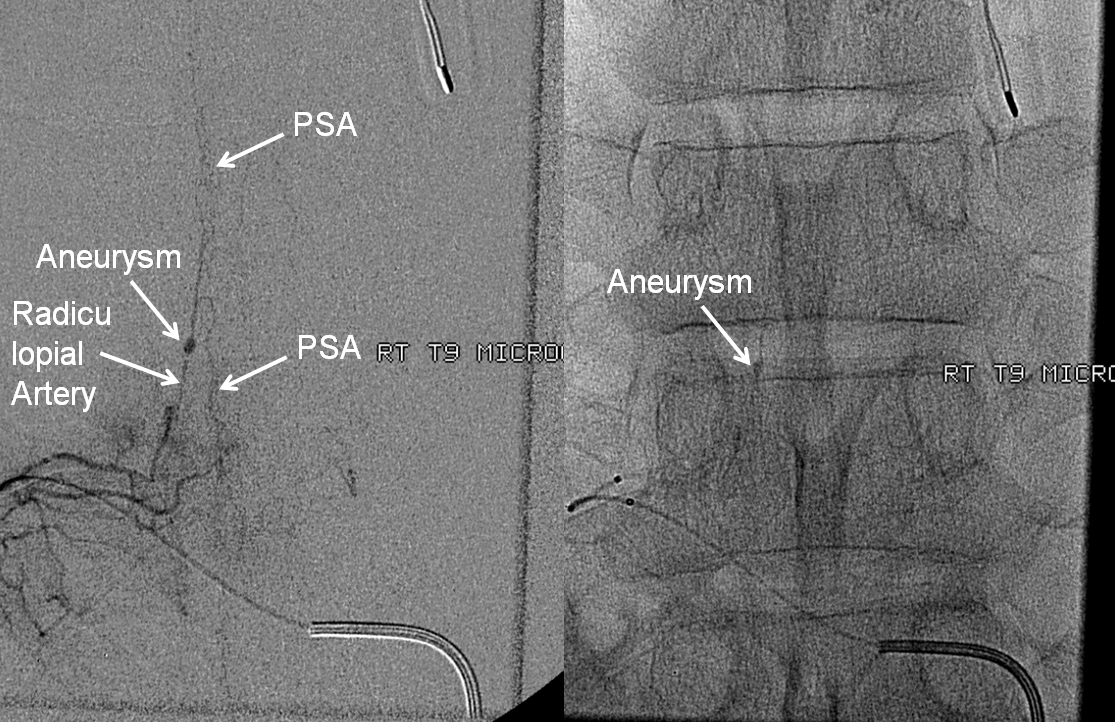 Clinical presentation, when ruptured, is perfectly explained by anatomy.  Rupture presents with sudden onset of back pain.  Location of initial pain usually corresponds to location of aneurysm, however it tends to quickly spread, as blood products do.  If enough bleeding takes place to cause cord compression, the appropriate symptoms follow.   In such cases, when compression is extrinsic and vascular supply to cord is preserved, prognosis is favorable, either with spontaneous resorption, or surgical hematoma evacuation. The diagram below shows hemorrhage around the radiculomedullary aneurysm 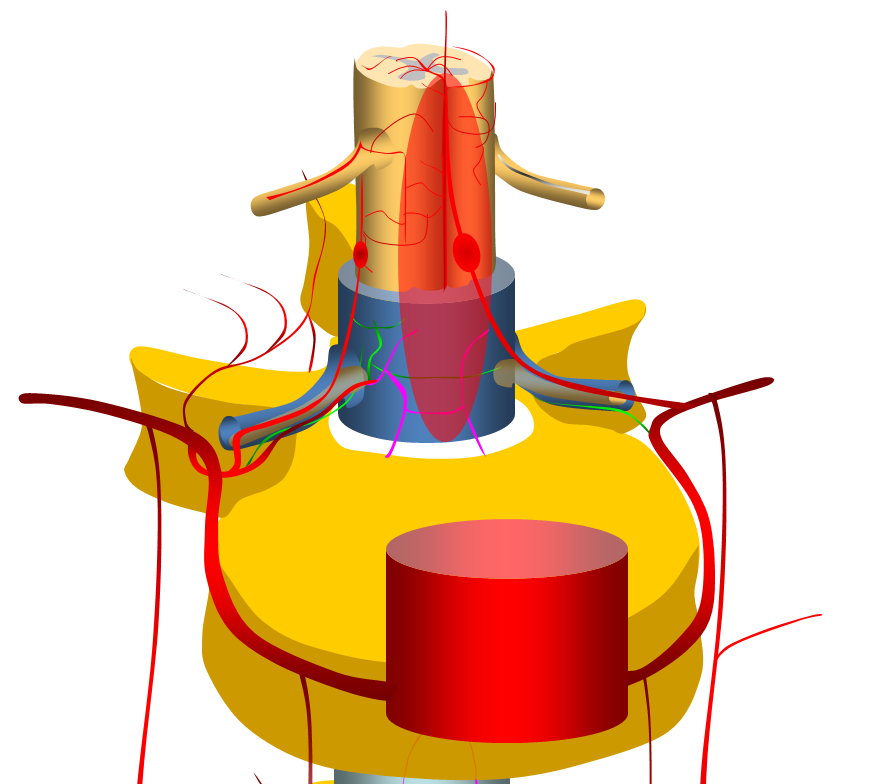 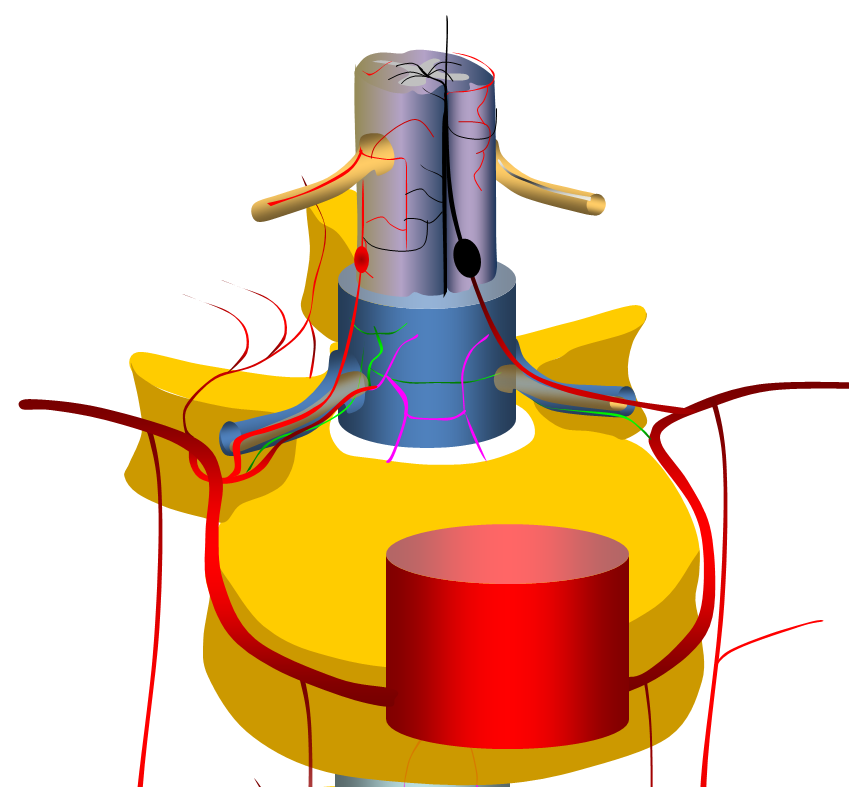 The MRI appearance of ruptured radiculomedullary or radiculopial aneurysm is very characteristic, and under-recognized.   The key is to recognize a “ball” or epicenter of blood products lateral to the cord, like this

The angiogram provides definitive diagnosis of the aneurysm here 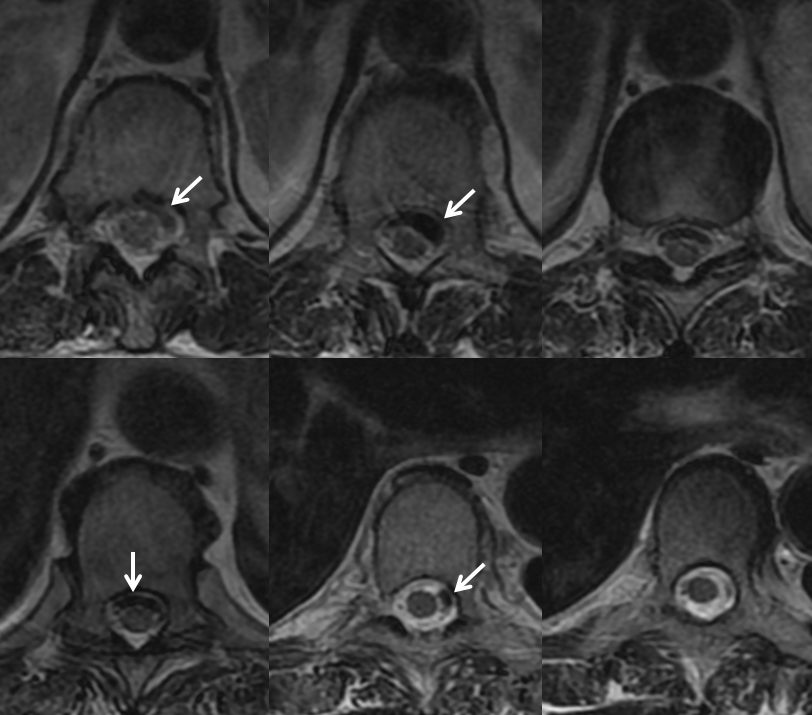 There is a variable amount of blood products in intramedullary spaces.  The cord is variably compressed but otherwise normal, without increased surface vascularity as  might be seen in a dural fistula or another vascular malformation.   If something like this is seen, the probability of spinal aneurysm is very high, and spinal angiography should be performed by an experienced operator.

Another MRI.  See the pattern? 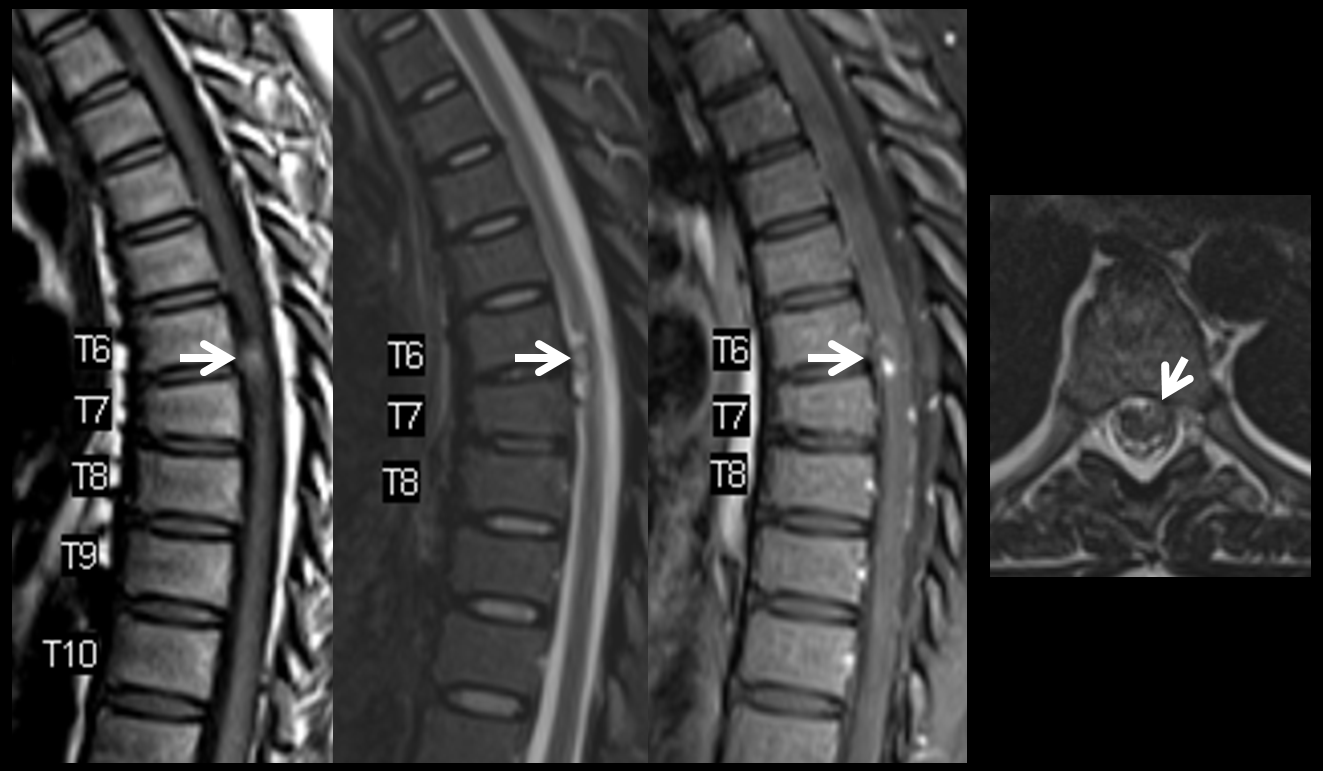 Here are some illustrative cases

This patient presented with headache followed several days later by back pain, leading quickly to complete loss of cord function below the umbilicus

The aneurysm, same as one already shown above, arises from the right T12 radiculomedullary artery (Adamkiewicz)

There was no other regional radiculomedullary supply at the time. She underwent decompression of hematoma and the aneurysm was left in place to allow for perfusion of the cord.   No cord infarction was seen.  Amazingly, over the next year the patient made exceptional recovery given initial degree of damage and is able to walk with walker.  It may not sound like a victory, but for those who know any kind of recovery from the usually devastating spinal cord stroke is a kind of miracle.  Follow up angiography showed healing of the verts

Spinal images showed something incredible — a complete reorganization of anterior spinal supply.   See below — the old right T12 radiculomedullary artery and aneurysm are gone (presumably thrombosed) and in its place an entirely “new” set of radiculomedullary arteries from levels which previously were angiographically invisible.  There is a perfectly reasonable embryologic explanation for it, as presented by Dr. Raz at the 2017 Val d’Isere meeting.  See “Spinal Arterial Anatomy” page for details.  In a nutshell, the dominant radiculomedulary aterial supply arises from a number of early embryonic “radiculomedullary” precursors. These precursors do not disappear and remain patent in very small form below angiographic resolution. However they have collateral potential just like the myriad possible collaterals which play a role in the more well-known reconstitution of the brain or cervical/facial regions when primary pathways are slowly occluded.  The same thing happens here — microscopic radiculomedullary arteries enlarge, given enough time, to meet demand.  See below for images of initial and follow up anterior spinal supply 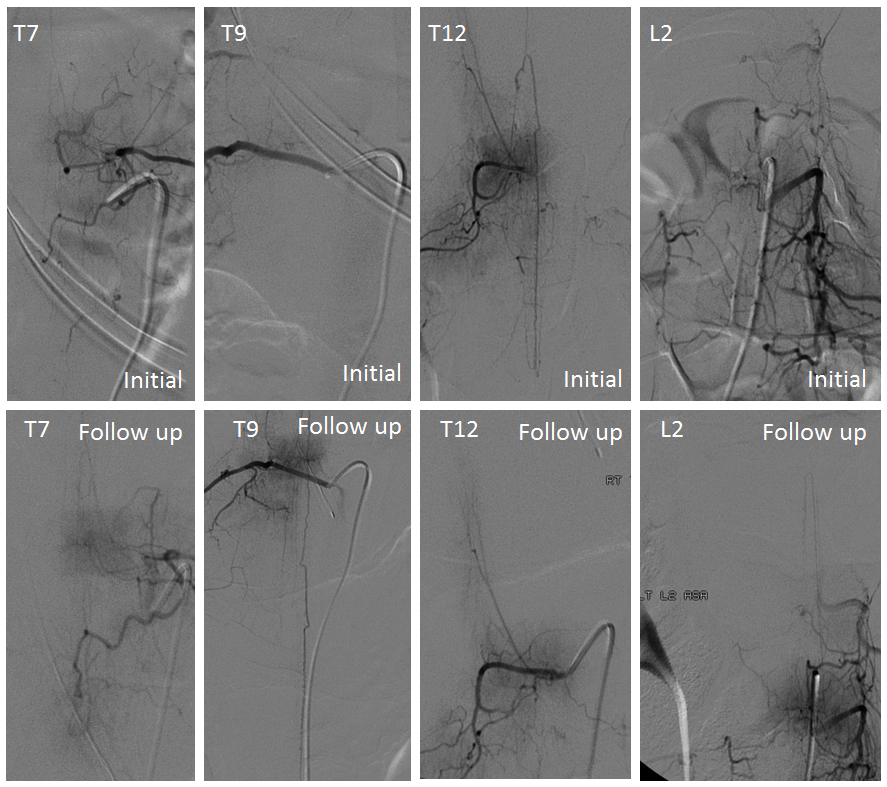 Another radiculomedullary aneurysm, presenting with pain followed by lower extremity paresis due to mass effect of hematoma.  The anterior spinal system is patent. The aneurysm has a typical dissecting appearance.  They pretty much all look the same — fusiform, in the proximal intradural space.  Both are arising at the left T12 level 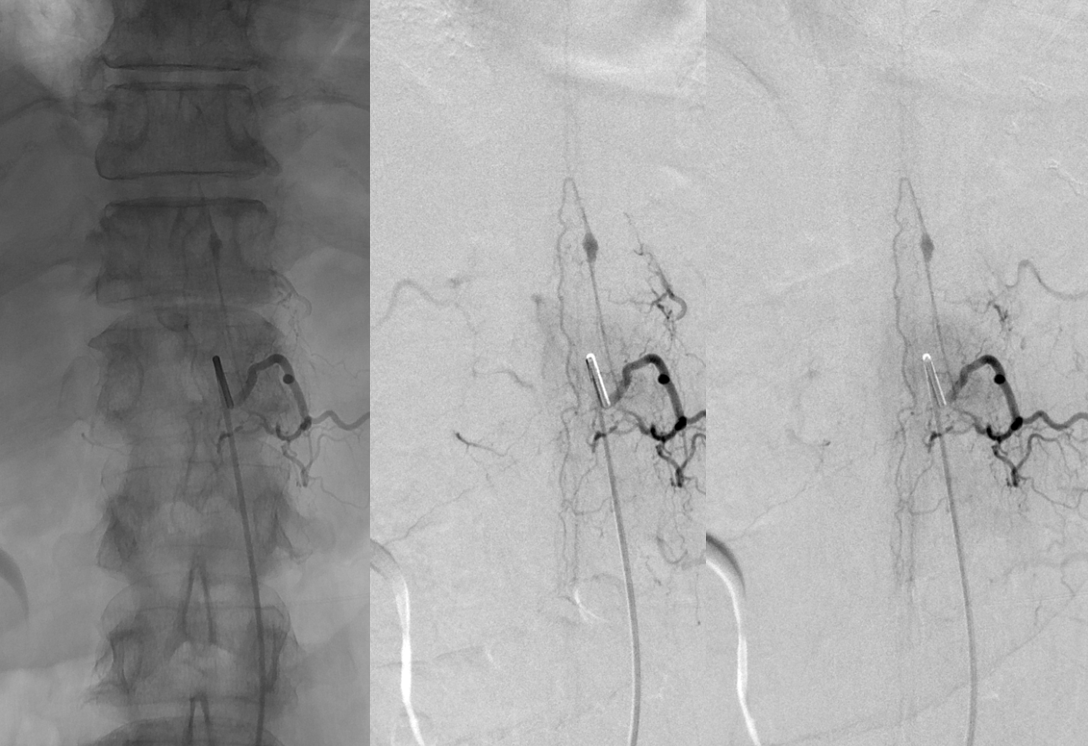 A closer look shows that this is actually a “radiculomedullopial” artery — both anterior and posterior spinal artery radiculopial (arrow) contributions are seen from this level.  The aneurysm is on the radiculomedullary component 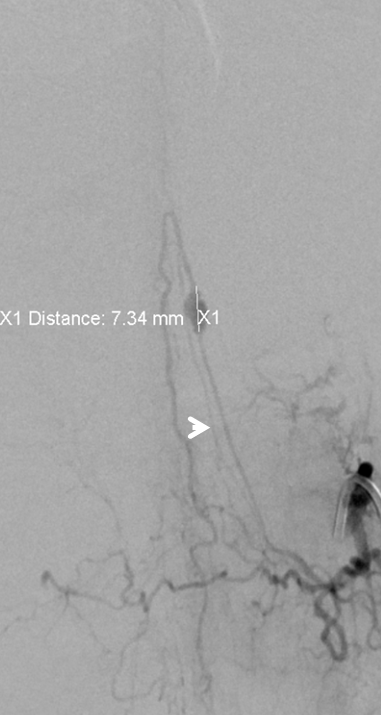 Follow up angiogram shows reorganization of anterior spinal artery supply, now arising from the LT T11 segmental artery, similar to the case above where time allowed for thrombosis of the aneurysm and compensatory enlargement of the rudimentary radiculomedullary arteries to assume dominant cord perfusion 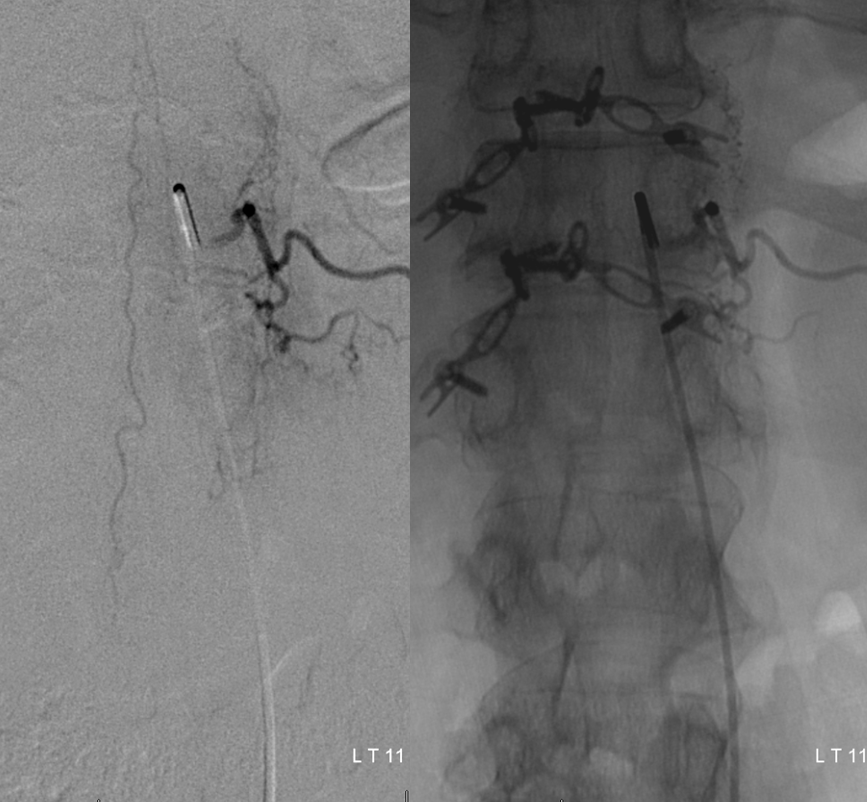 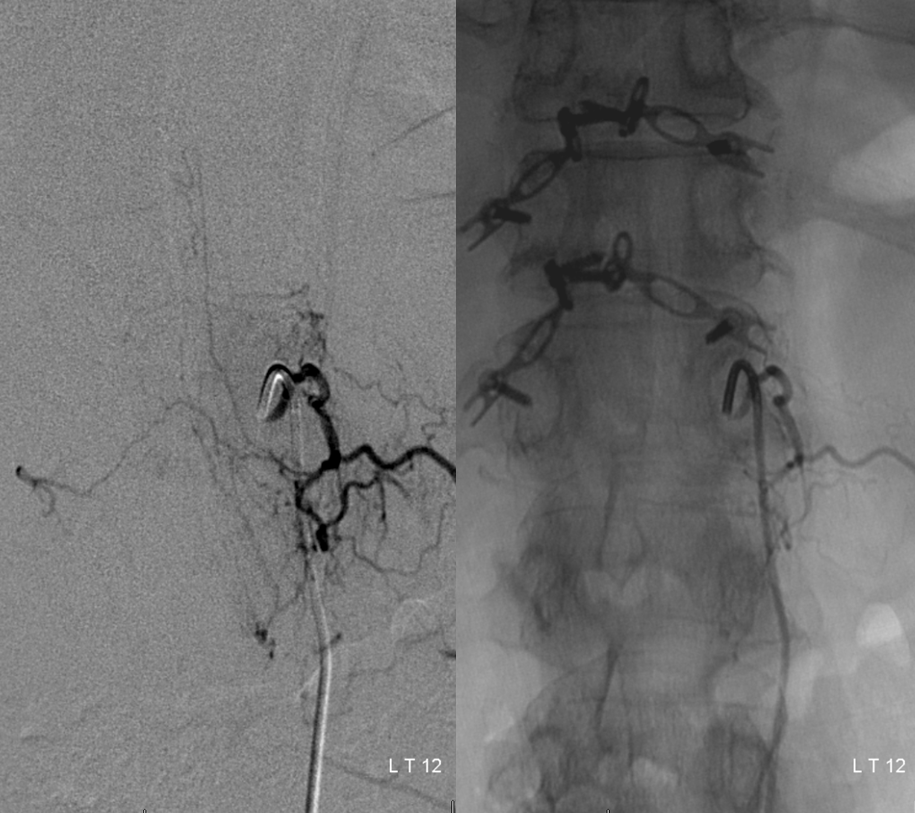 This middle-aged man presented with acute back pain, followed quickly by lower extremity paresis, sensory level, and incontinence — typical spinal hemorrhage presentation.  Notably, nonhemorrhagic spinal artery infactions present in the same manner — onset is usually painful, even when there is no bleeding — unlike most cerebral ischemic infarcts.

MRI of the thoracic spine shows an intradural, extramedullary hematoma (orange arrows), which is best seen when outlined by a normal ventral spinal vein (light blue) on post-contrast T1-weighted images. 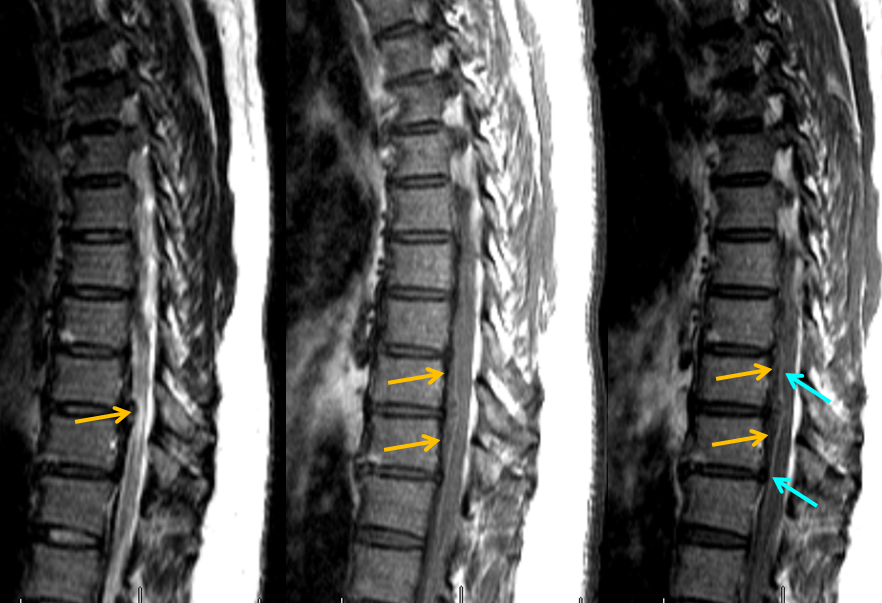 Injection of the right T10 segmental artery identifies a typical fusiform dissecting aneurysm (red) of the radiculomedullary artery (Adamkiewicz, pink), giving rise to the anterior spinal artery (purple).  Most isolated spinal aneurysms (isolated meaning not associated with artiovenous shunts such as AVMs or intradural fistulas) are ruptured dissections (i.e. ruptured dissecting aneurysms or pseudoaneurysms). The catheter arrow is black, and dorsal division of the segmental artery is yellow 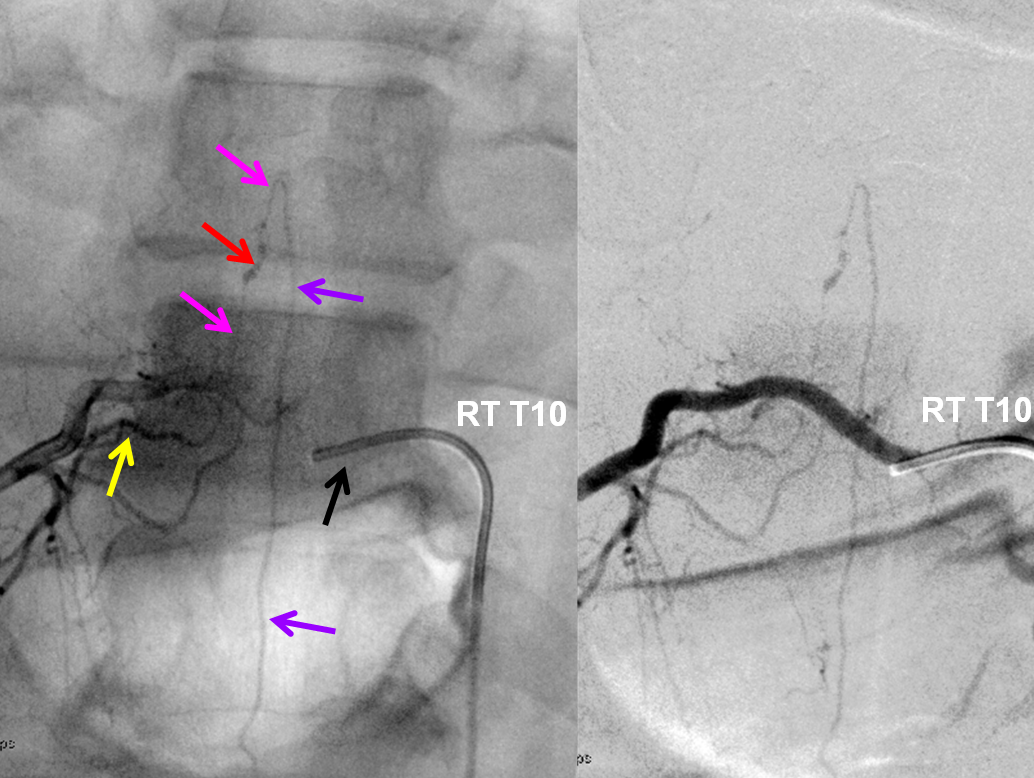 Fortunately, another sizable contribution to the anterior spinal axis was located from the right T7 segmental artery.  With the microcatheter wedged in the right T10 level proximal radiculomedullary artery (white arrow), thus obstructing its flow (test occlusion), the right T7 segmental artery is injected through a second diagnostic catheter.  You can see robust reconstitution of the entire spinal axis, including the portion below T10.  Therefore, the patient “passed” test occlusion, enabling sacrifice of the right T10 radiculomedullary artery with coils (green arrows).  Notice that coils do not reach the level of the pseudoaneurysm.  We felt this to be acceptable, as no other branches arise from the T10 radiculomedullary artery to enable its continued patency.  With no outflow, the artery and its dissecting aneurysm will thrombose.  In fact, the post-coiling image on the right no longer opacifies the dissecting pseudoaneurysm.  The patient recovered well and has not re-hemorrhaged. 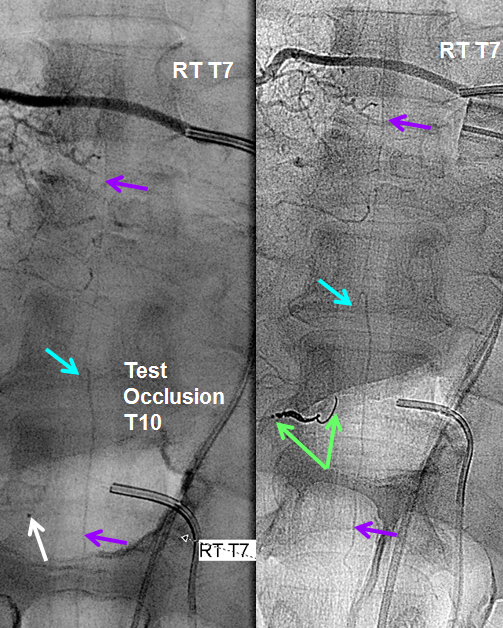 The obvious question is what should the management be?  Conservative? Endovascular? Surgical? The answer is unknown.  Both intervention and observation can be justified on logical grounds.  For example, if the aneurysm is radiculomedullary and there are no immediate collaterals, occlusion of aneurysm (which also requires radiculomedullary branch occlusion) risks a devastating cord infarct. Also, as stated above, natural history is usually but not always favorable. Therefore, we feel that intervention in these cases is not justified. If, however, the aneurysm is radiculopial or radiculomedullary with presence of good collaterals, we feel that treatment is safe and justified to prevent re-rupture, even if latter is not common.  This is a purely experiential approach.  There is no good data on what to do given rarity of disease

Here is a great example of how anterior spinal artery aneurysms are missed.  A perfect example of superb detective neurointerventional work by Dr. Eytan Raz

The patient, like case 1, presents with headache followed by back pain and paresis 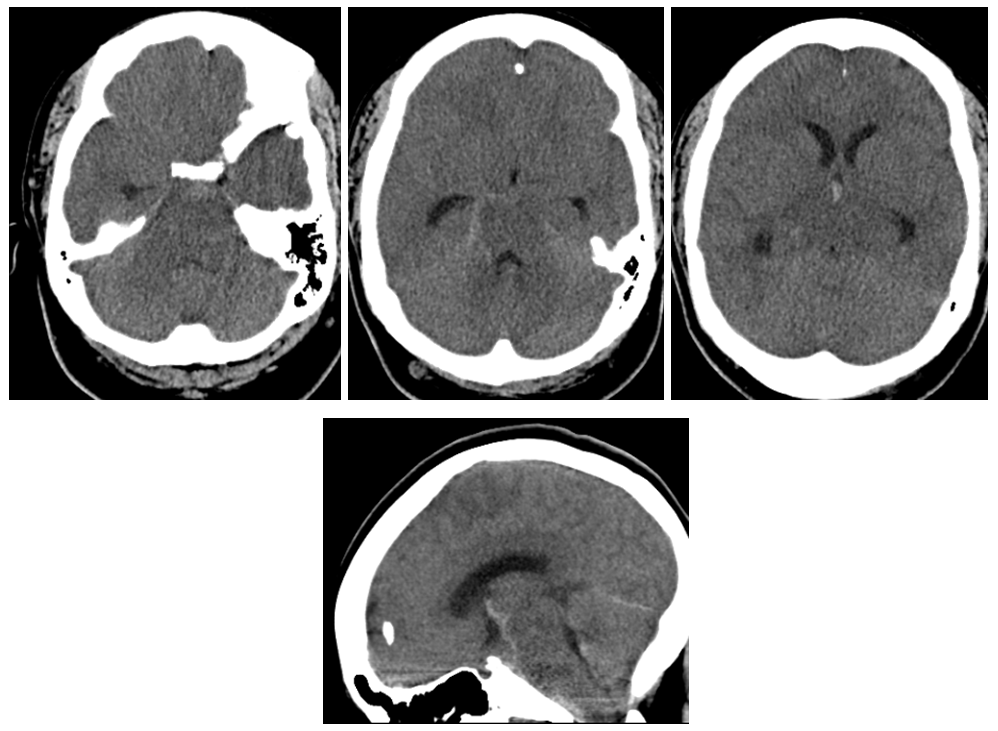 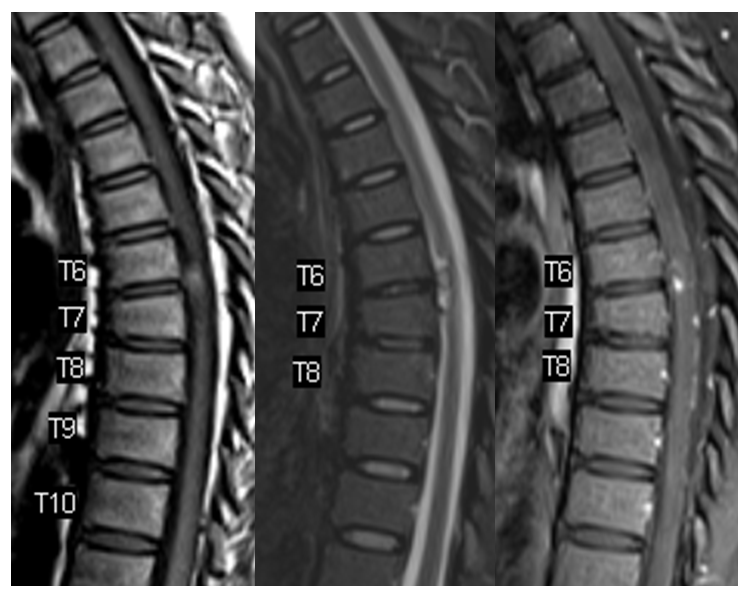 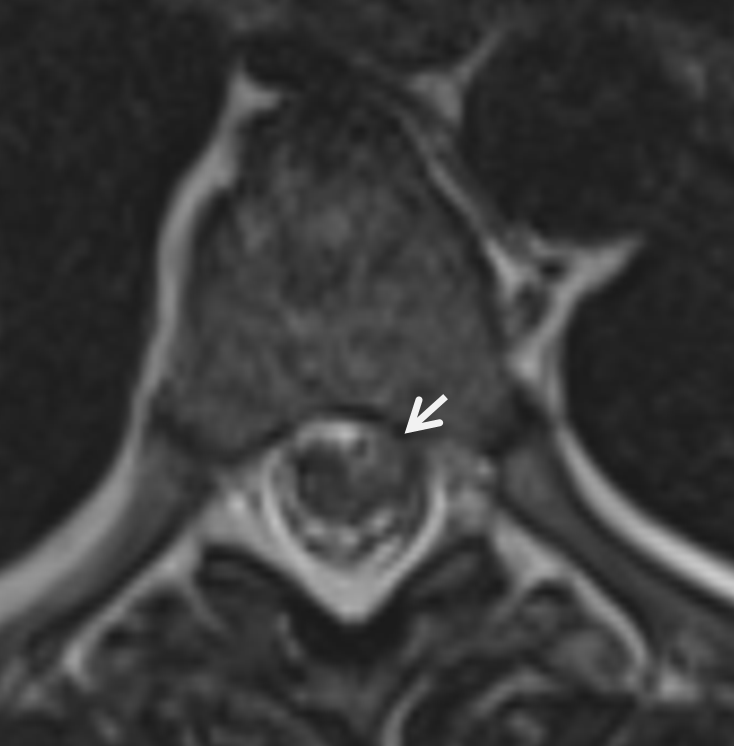 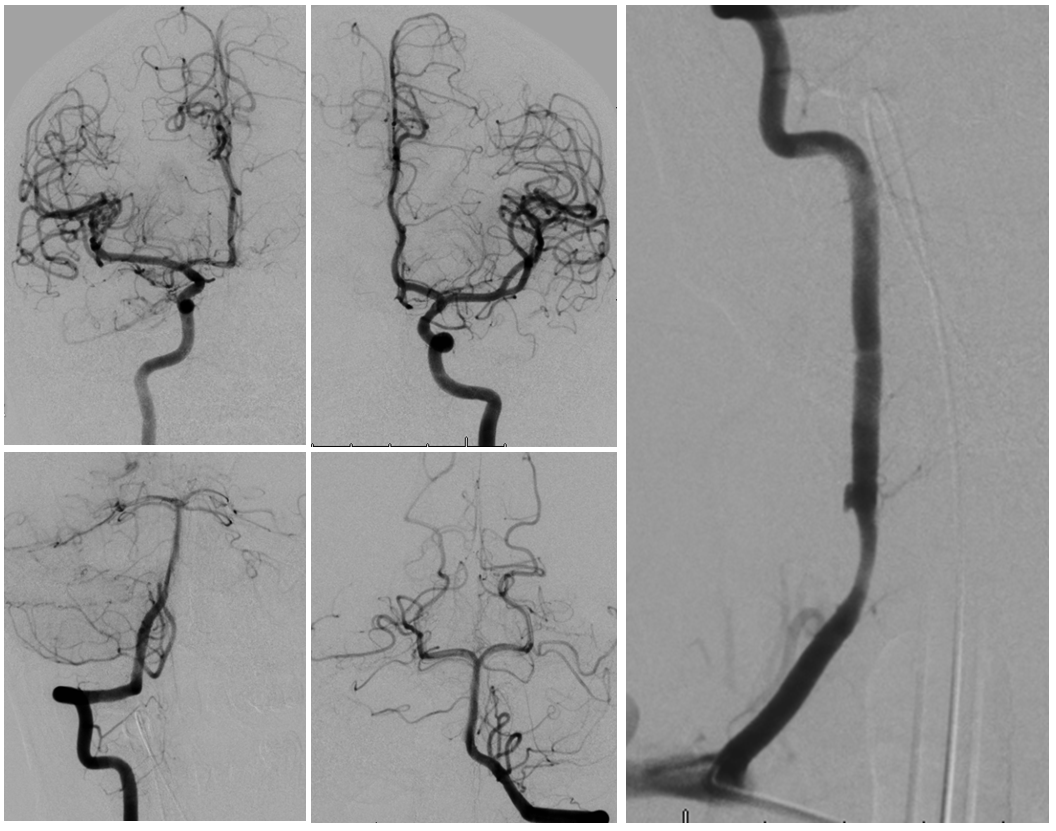 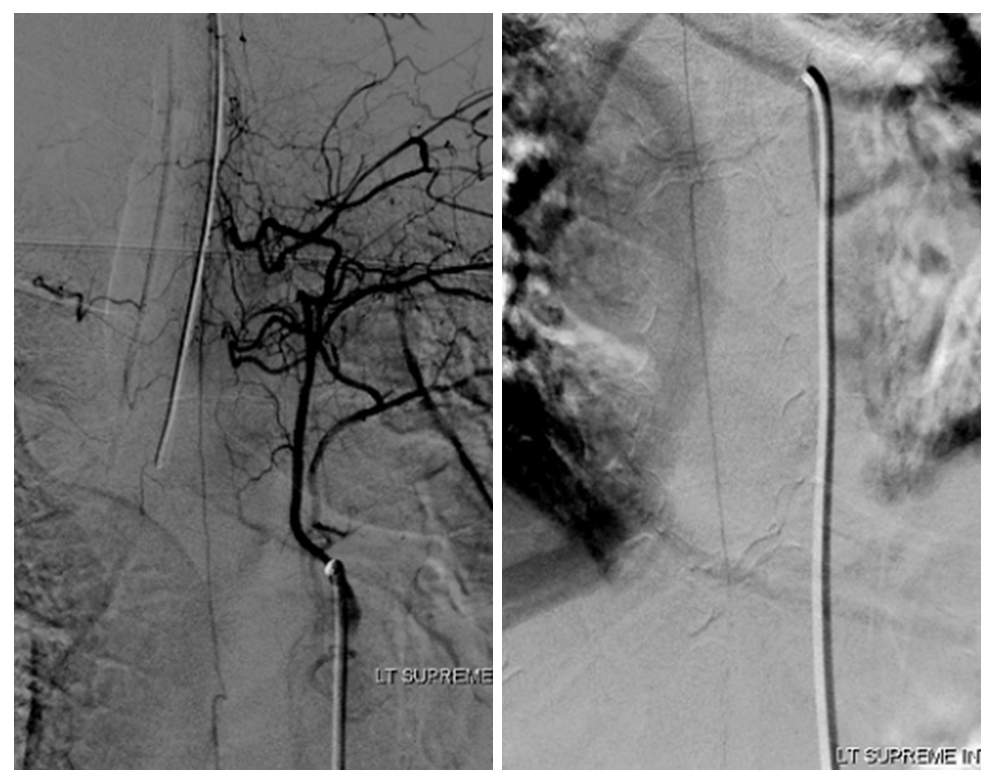 Angio is read as negative.  It is not.  An experienced operator will notice a few highly unusual things.  First, there is no “Adamkiewicz”.  Supply to nearly all of cord from as high as supreme intercostal is extremely unusual.  Also, there is a characteristic “kink” at the mid-thoracic level of the ASA (arrow below).  This kink shows location of another radiculomedullary artery contributor.  The presumed nonvisualized vessel is shown with dashed white lines 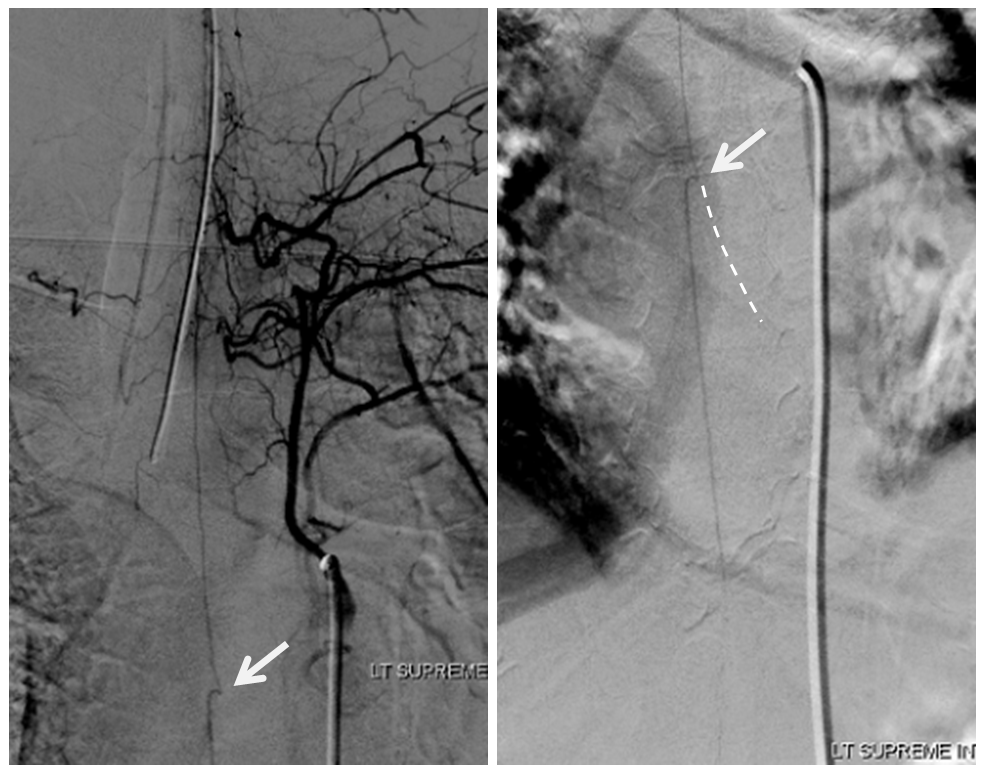 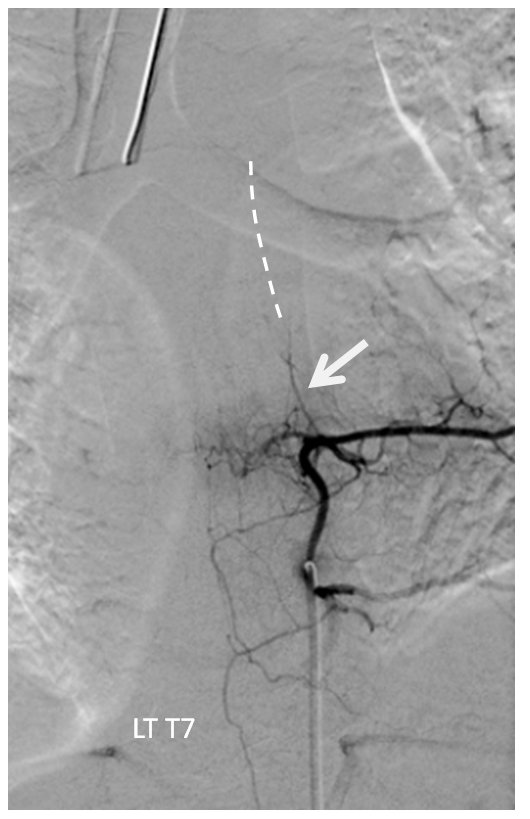 The conclusion is that an aneurysm must have been present at the left T7 radiculomedullary artery, which is the missing “Adamkiewicz”. The aneurysm and the Adamkiewicz have thrombosed. Fortunately, there is enough collateral supply between the Supreme Intercostal and Left L1 posterior spinal to allow for cord perfusion.

Follow up angiography is done.  Look at images below.  The supreme intercostal is now supplying a lot less cord (as it should) 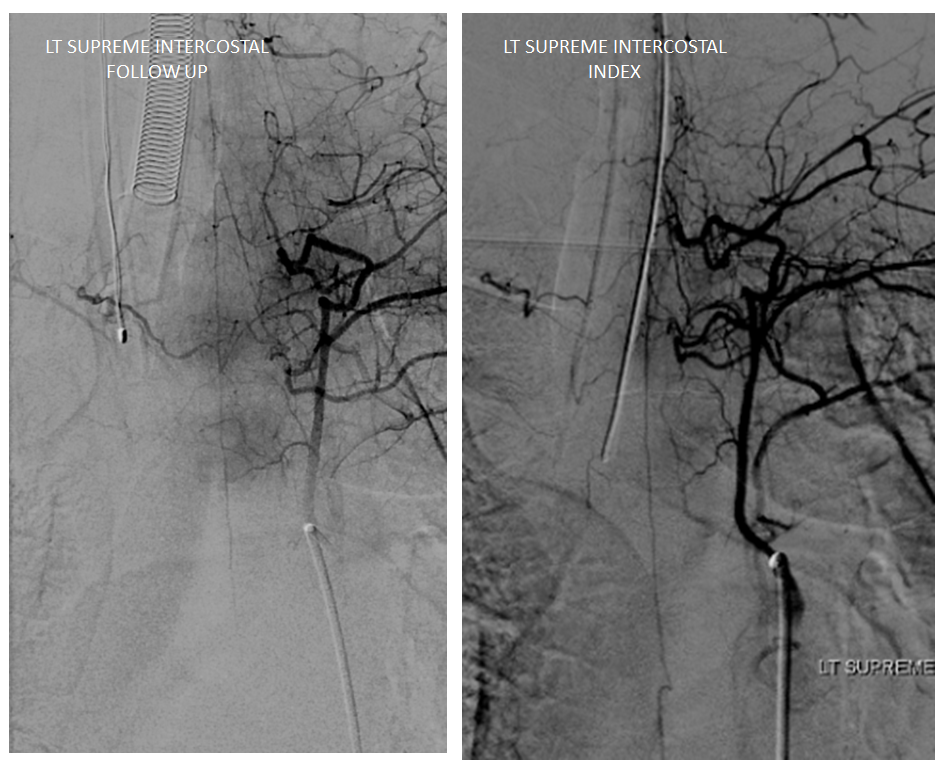 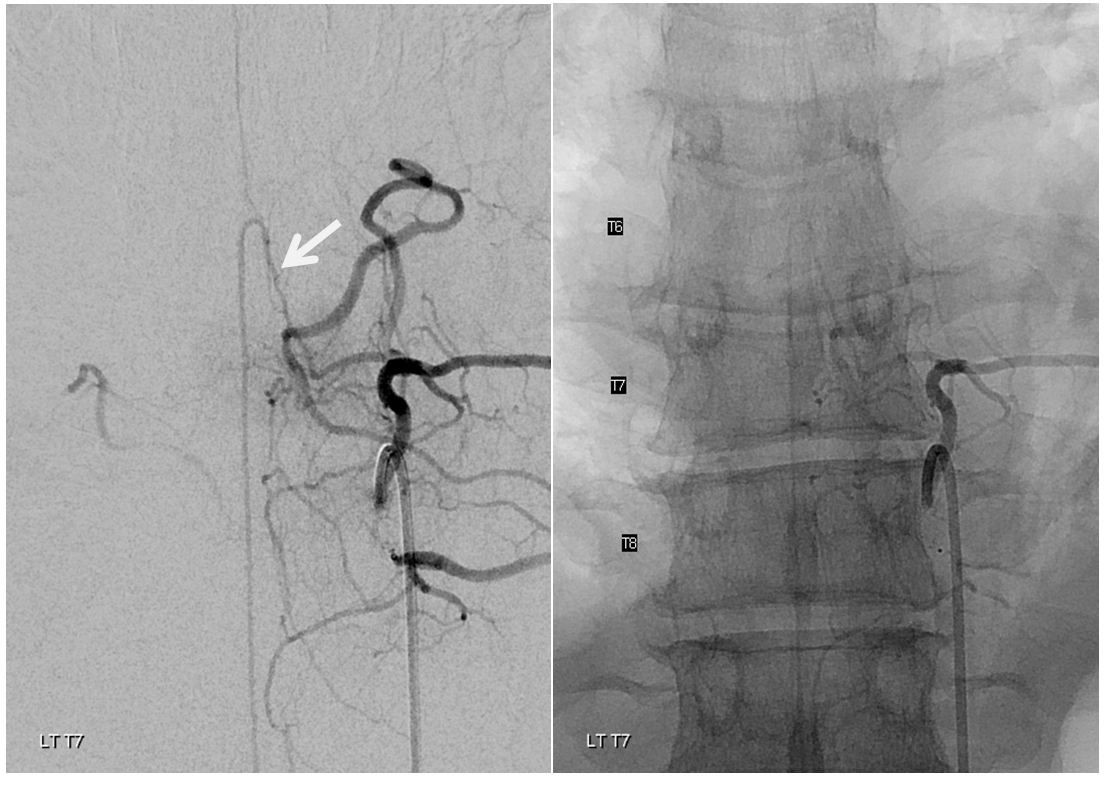 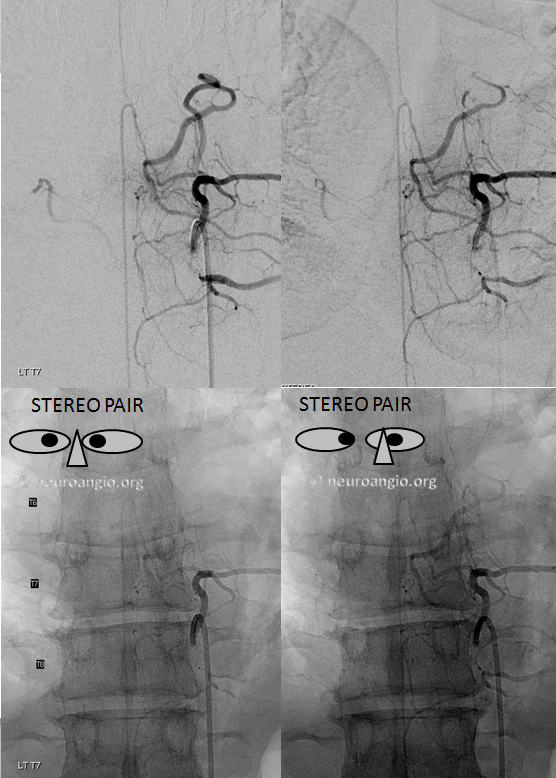 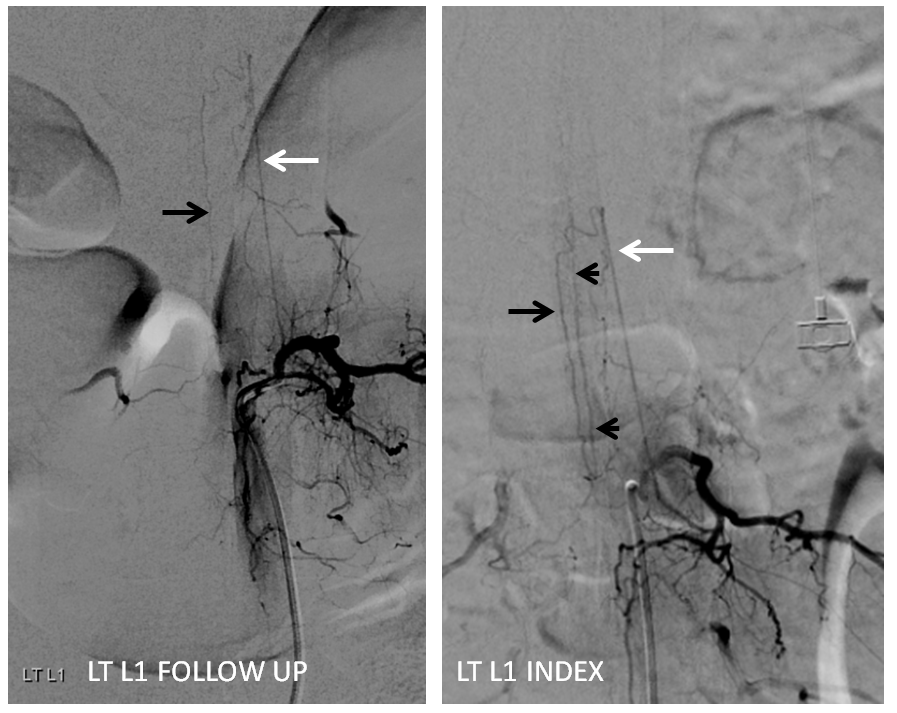 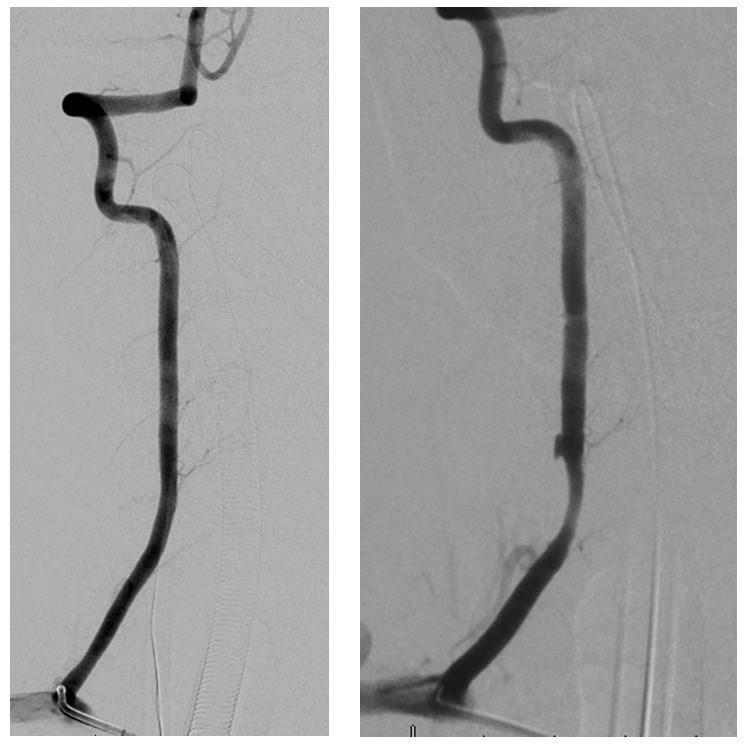 These are aneurysms on the radiculopial artery (posterior spinal networks supply) rather than radiculomedullary atery (anterior spinal supply).  They are much better tolerated because the main issue is bleeding rather than occlusion.  Occlusion of radiculopial artery is very frequently asymptomatic.  Bleeding can cause cord dysfunction because of mass effect, but it is extrinsic to the cord and usually carries an excellent prognosis (“usually” with understanding that the number of cases is quite small).

This young patient presented with multifocal extradural, extramedullary (epidural) and intradural extramedullary (subarachnoid) hemorrhages involving the cervicothoracic cord, with extensive cord signal changes that were ultimately given no better diagnosis than transverse myelitis.  Spinal angiography identified a radiculopial spinal aneurysm arising from the right T9 segmental artery, like so: 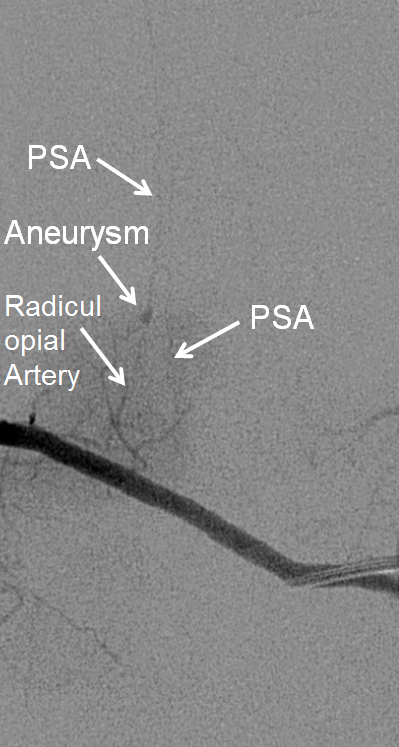 An obligatory stereo pair, so useful in the spine: 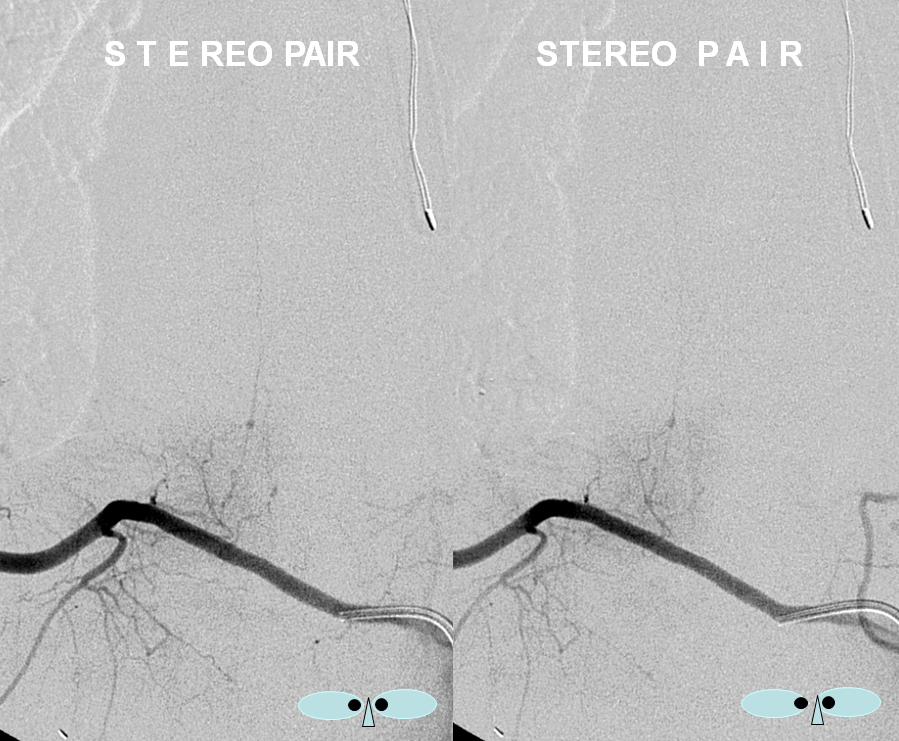 Microcatheter run, better showing the aneurysm and its off-midline relationship to the spinous processes.  Notice unusually large size of the posterior spinal artery segment.  In fact, prominent surface cord vessels, hyperemia, and arteriovenous shunting were seen throughout the cervical and thoracic spine, consistent with an acutely inflammatory process.

We felt that neither nBCA nor Onyx embolization were worth the risk; to durably chose this aneurysm the embolic must fill the aneurysm itself, and close the radiculopial artery, which is usually well tolerated; in this case we felt that the prominent size of the PSA, and presence of major myelopathic symptoms, were too much to risk another hit.  Coils were therefore placed in the intercostal artery (to mark the level of laminectomy) and into the proximal ventral division to slow down intra-aneurysmal flow.  Our feeling was that proximal coils alone may achieve aneurysm thrombosis this case, which however did not turn out to be the case in surgery

Hemorrhage around otherwise normal-appearing spinal cord, especially with epicenter of hemorrhage lateral to the cord, is highly suspicious of spinal arterial aneurysm. Angiogram by an experienced operator is warranted