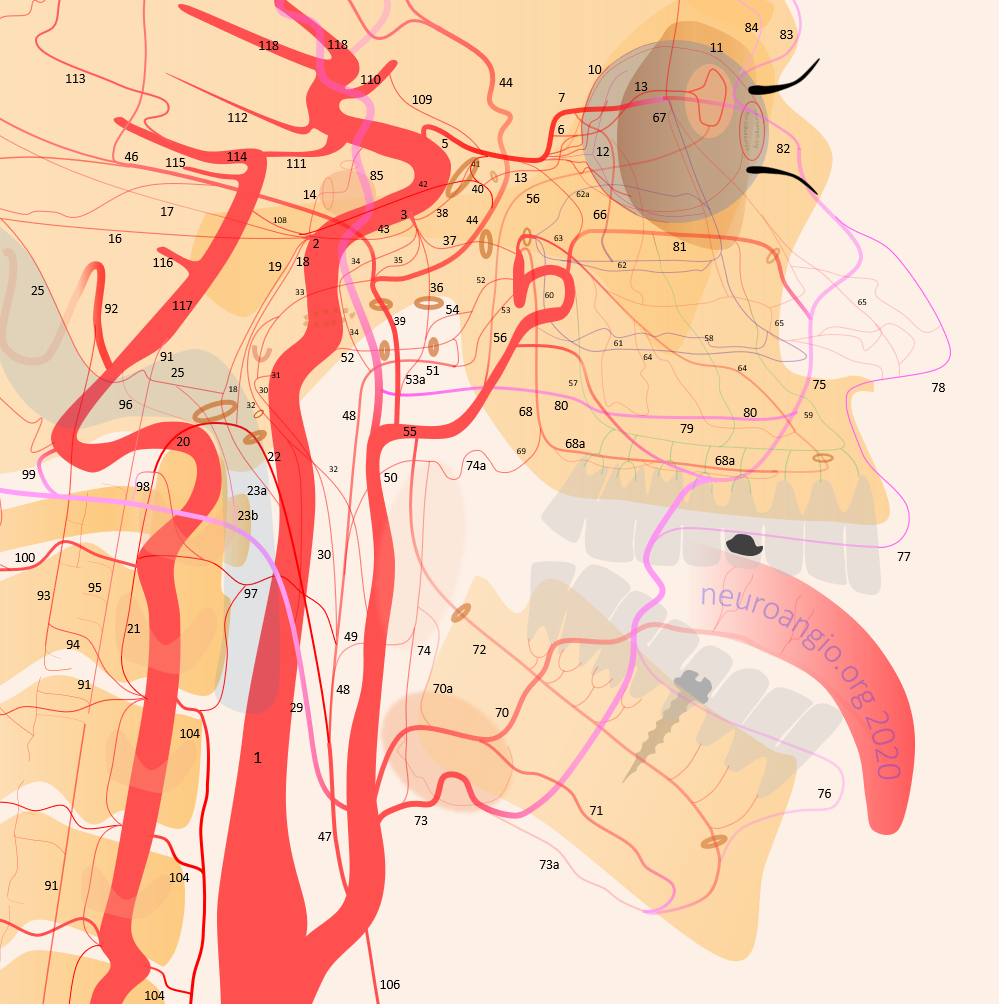 The ascending palatine artery is 74.  The global key is on Drawings and Diagrams page

Ascending Palatine Artery is part of complex and highly redundant network in the posterolateral oropharynx.  Usual origin is from proximal facial artery.  Has a characteristic vertical ascending course, where it supplies tonsillar pillars.  In the upper oroparynx, it reaches the key area of soft palate, and its “Artery of Soft Palate” (69) also known as the Lesser Palatine Artery (In Netter for example).   The Ascending Palatine artery is in balance with the other vertical ascending artery — the pharyngeal trunk of the ascending pharyngeal artery (48).  At the top of the climb, the prize is the Artery to Soft Palate (69), with its characteristic curve (see below).  Competitors for its supply include Ascending Palatine, Superior (51) and Middle Divisions (50) of the Pharyngeal Trunk of the Ascending Pharyngeal (48), and greater palatine (68) Arteries.  The usual concepts of balance and spectrum apply — the larger one, the smaller the other.  There may not be a distinct artery to soft palate when supply is shared. This makes soft palate a key landmark. 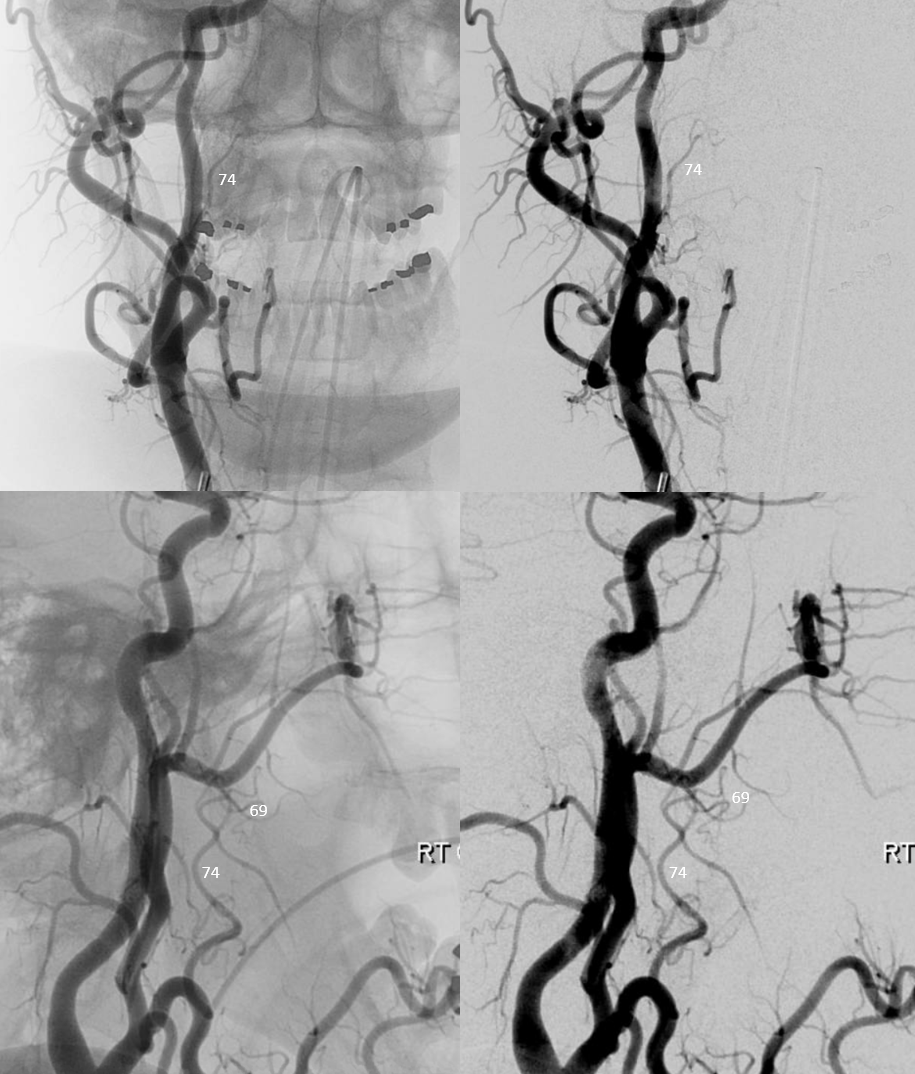 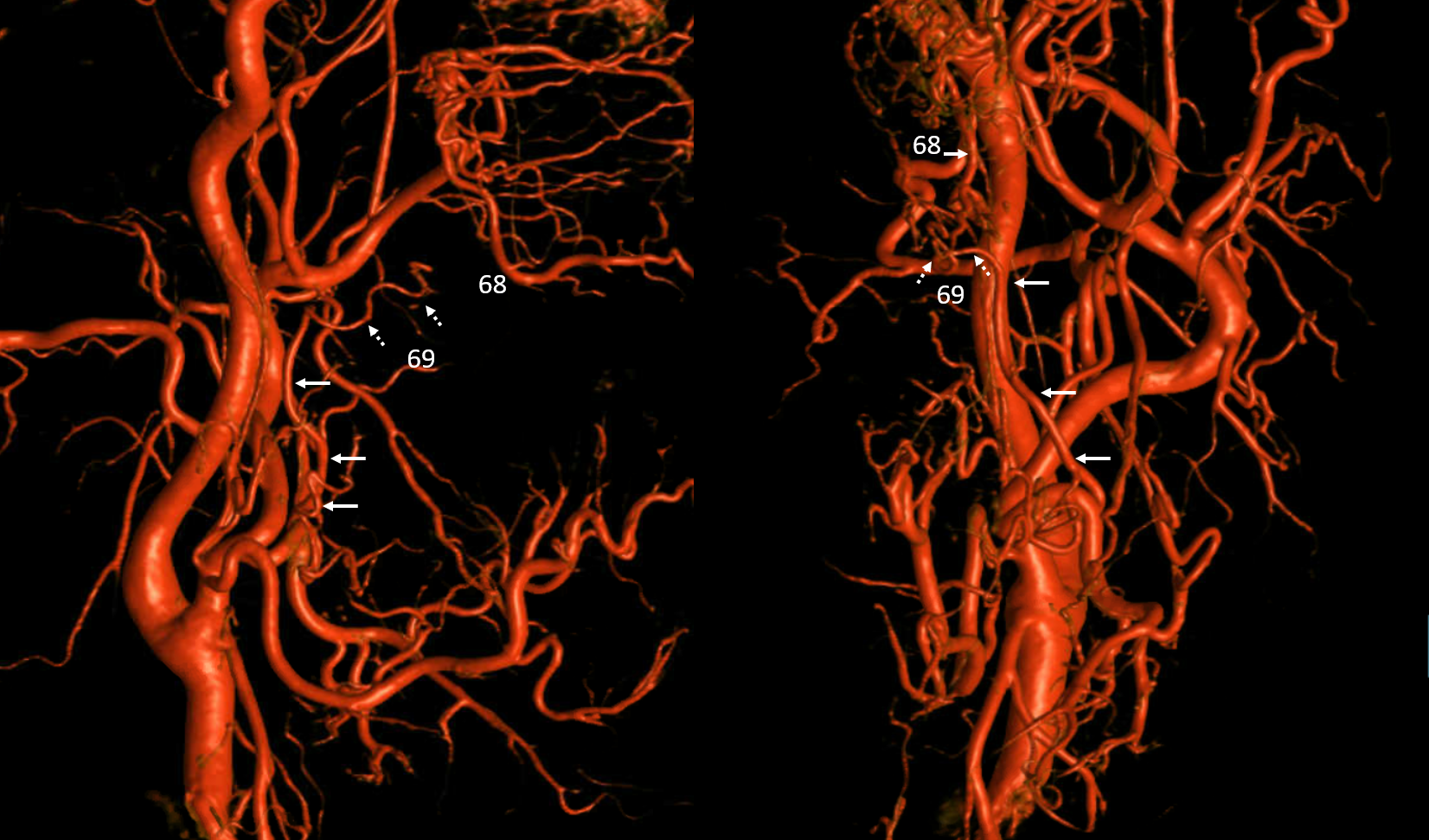 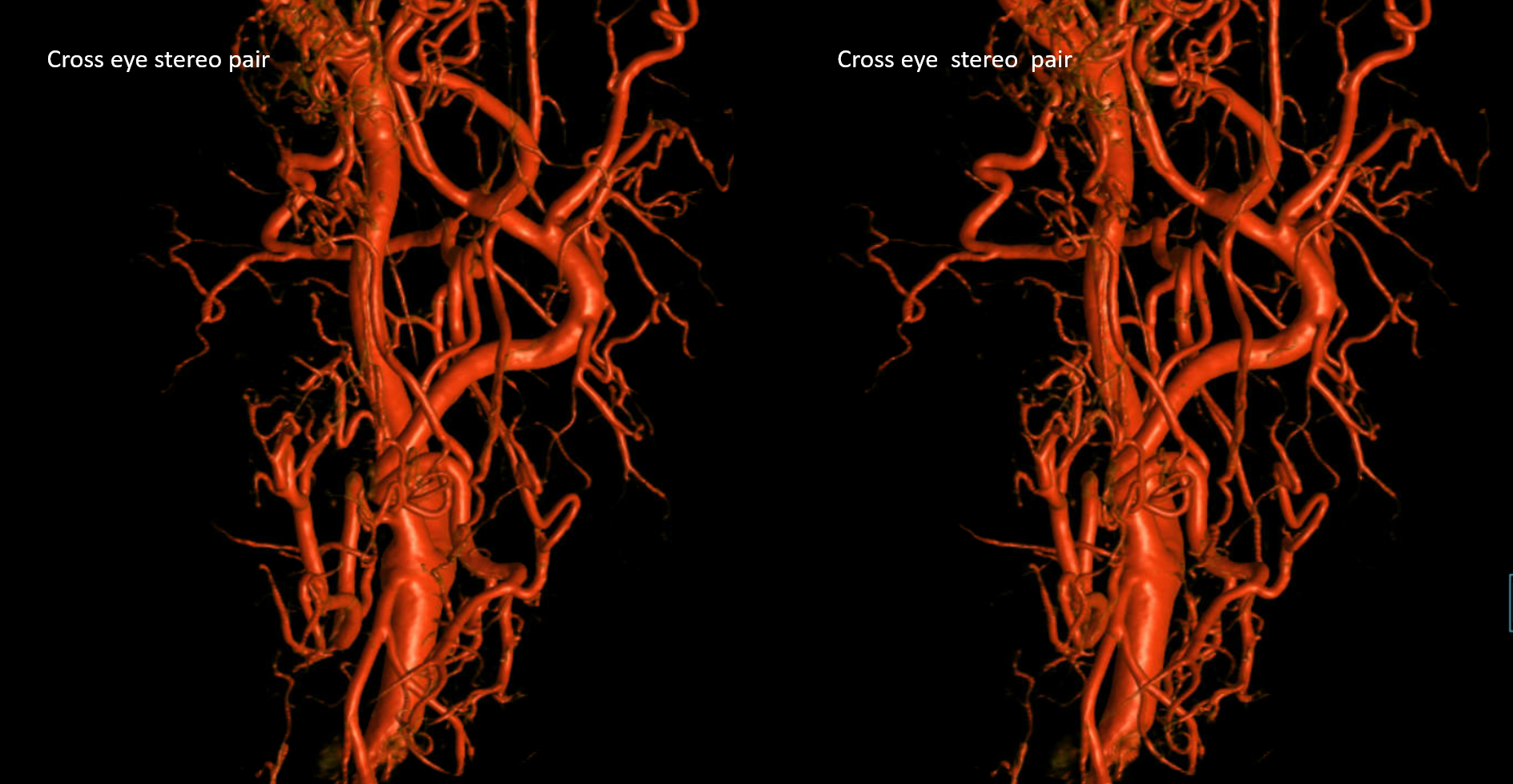 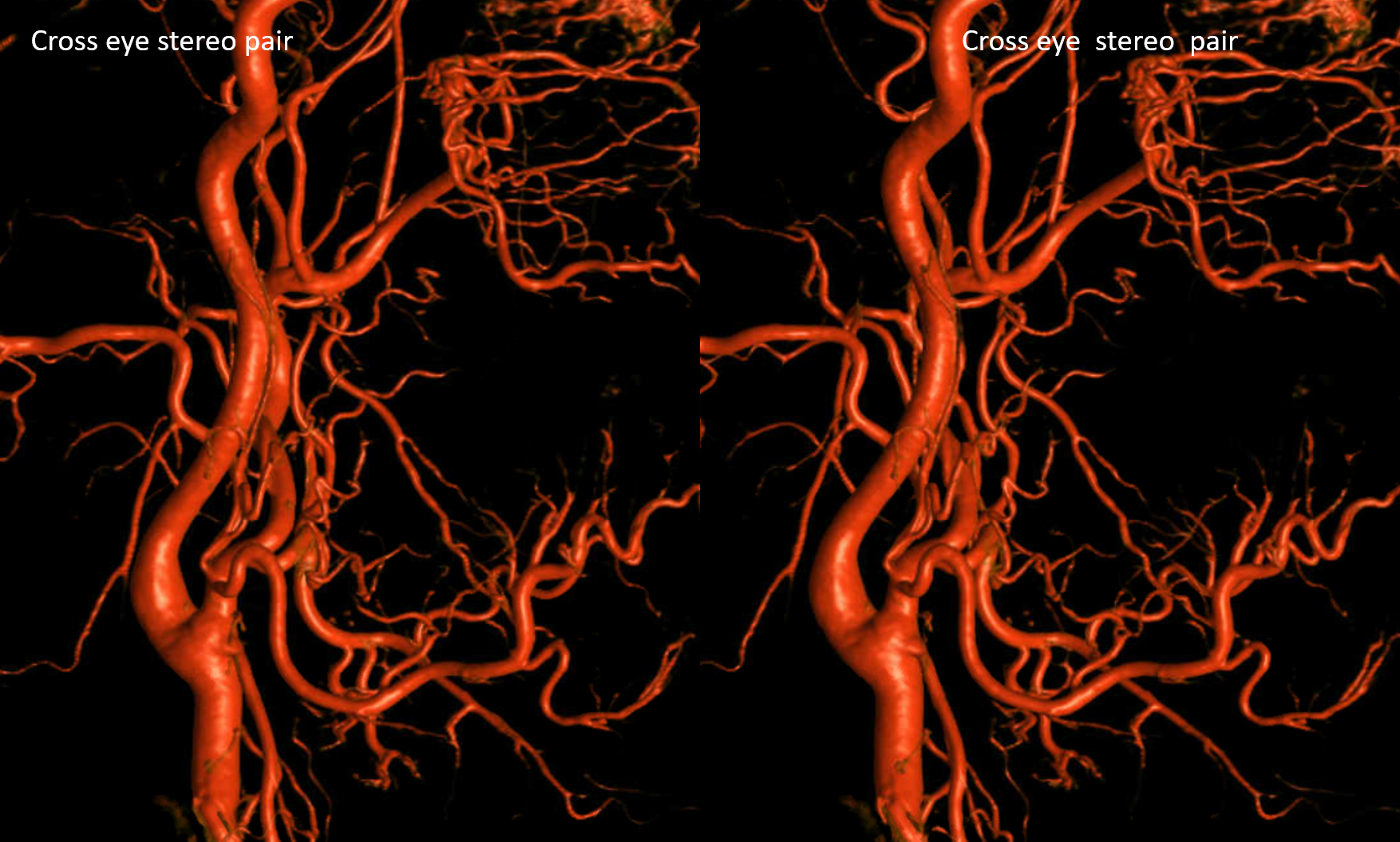 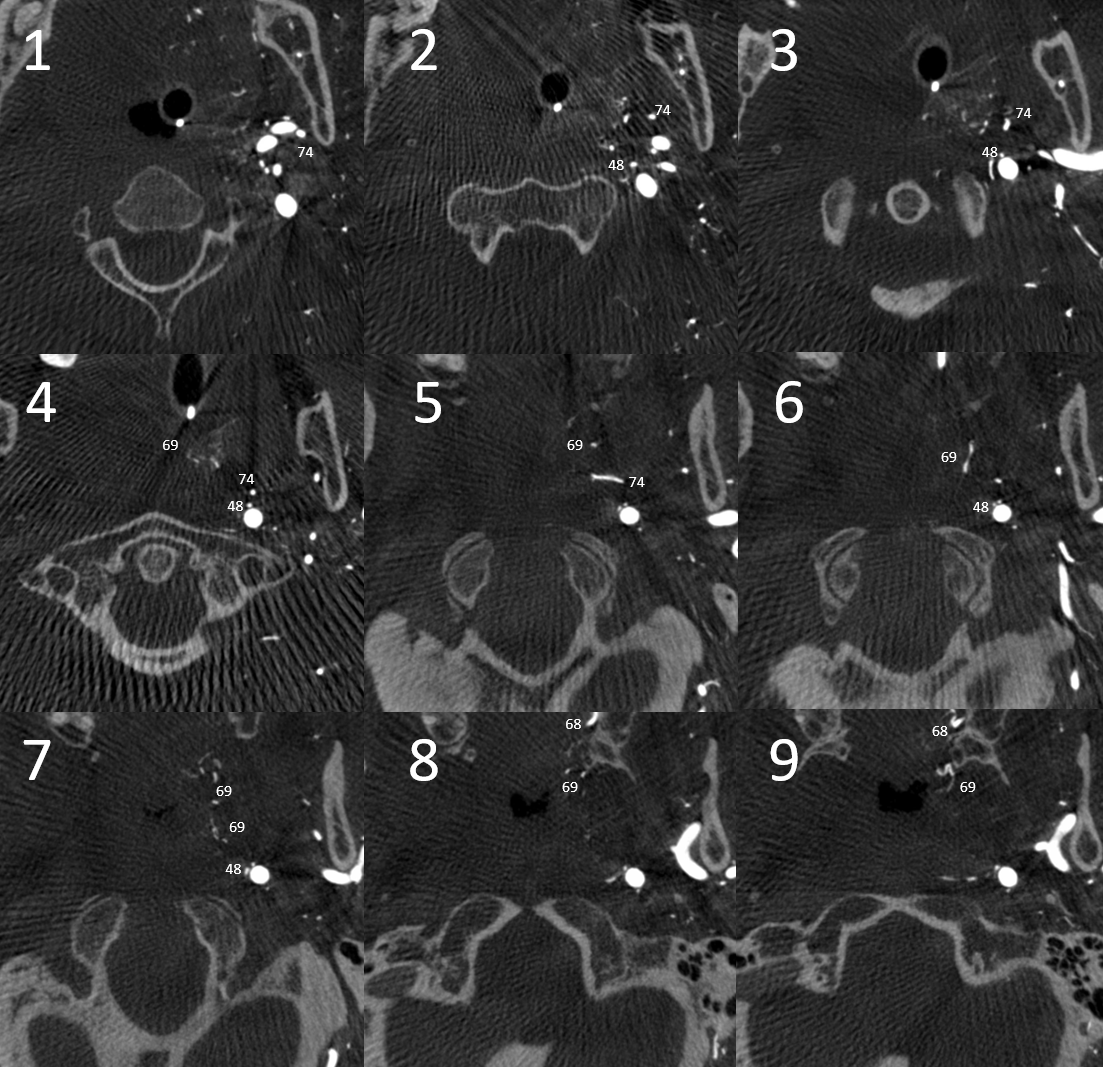 The balance is illustrated here, where soft palate is supplied by the superior trunk of the pharyngeal division of the ascending pharyngeal artery

Another example, courtesy Dr. Peter Kim Nelson — facing the other way, with a superb mucosal blush of the soft palate. Both superior and middle divisions of the pharyngeal trunk participate. 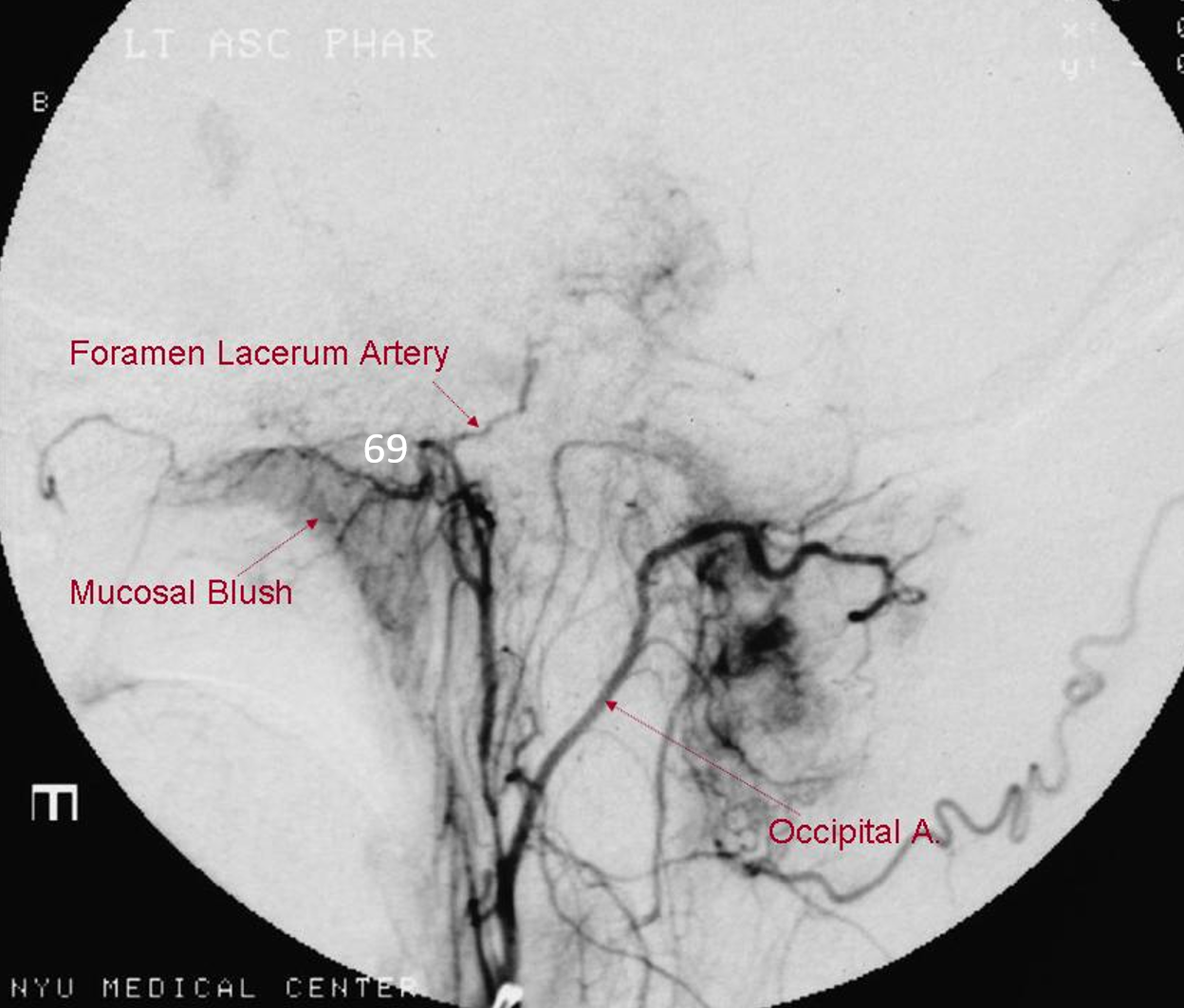 Below is yet another example from the early days of neuroangio.org with lots of colored arrows — in this case illustrating balance between the ascending pharyngeal and vidian arteries — but also showing a nice artery of soft palate.

Lateral ICA projection injection (left) demonstrates a Vidian artery.  Lateral ascending pharyngeal injection shows a number of very instructive findings.  The pharyngeal trunk (green) of the AP, through its superior branch (purple) reconstitutes the vidian artery (yellow) with a faintly seen blush at its point of anastomosis with the ICA (red arrow).  The middle division of the ascending pharyngeal artery supplies artery to soft palate (69). Also notice, by way of interest, prominent ascending clival branches (orange) of the hypoglossal division of the neuromeningeal trunk (white) which anastomose with the cavernous ICA at the level of the meningohypophyseal trunk through its inferior clival branches (red arrow, upper).  The AP also has a prominent muscular trunk (light blue) which anastomoses prominently with the vertebral artery (purple). See also Ascending Pharyngeal section 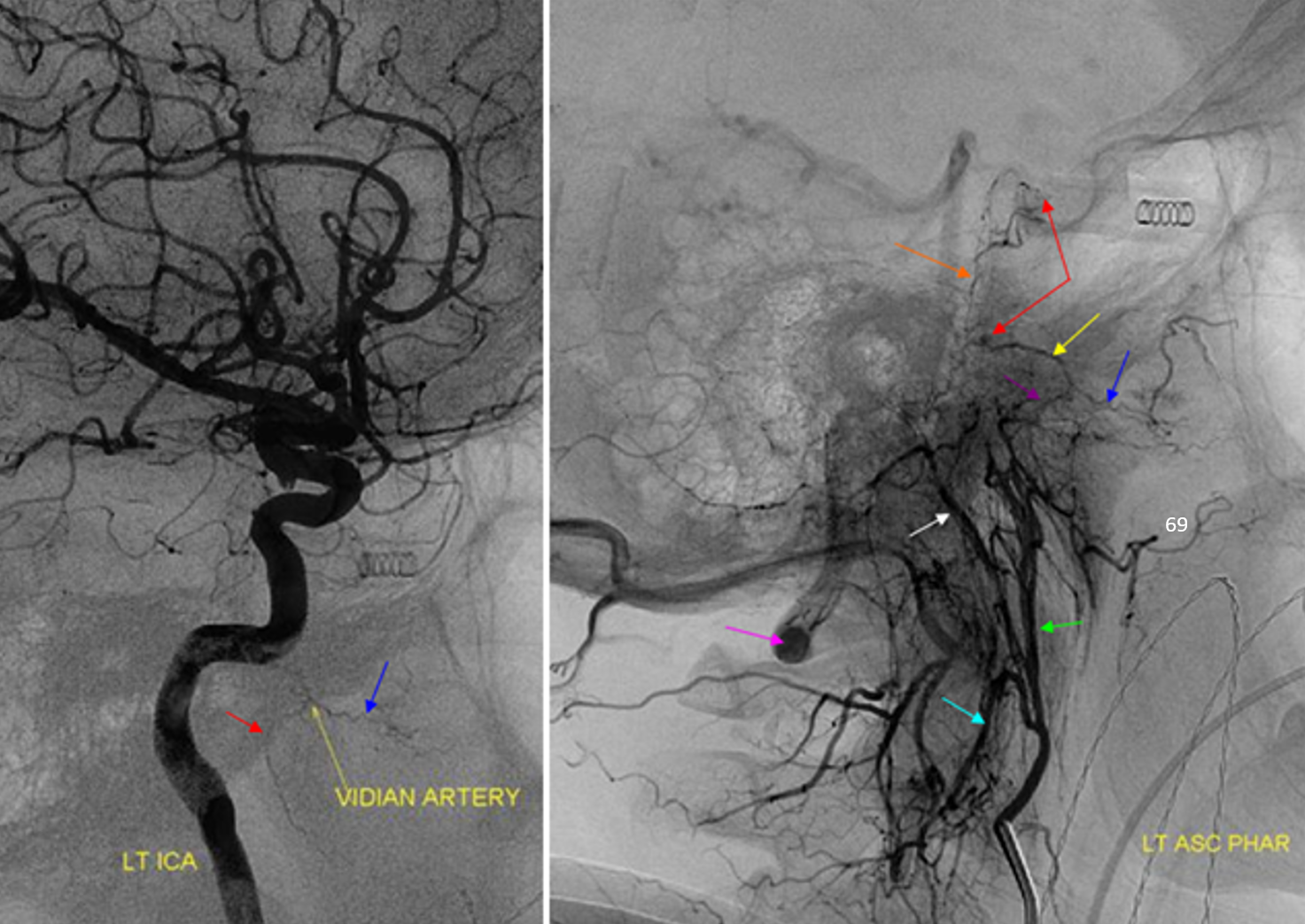