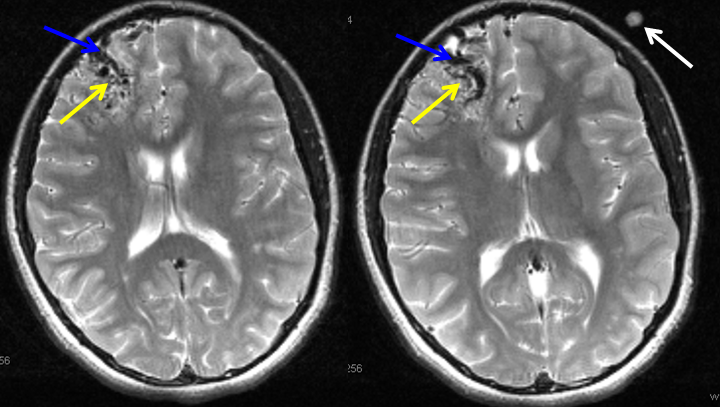 MRI of the brain shows an AVM (yellow arrows) in the right frontal lobe of the brain.  Some of the larger AVM veins can be seen (blue arrows).  A fiducial marker (white arrow — special marker which allows the surgeon to better locate the AVM during surgery) is also seen on this special pre-operative MRI study. 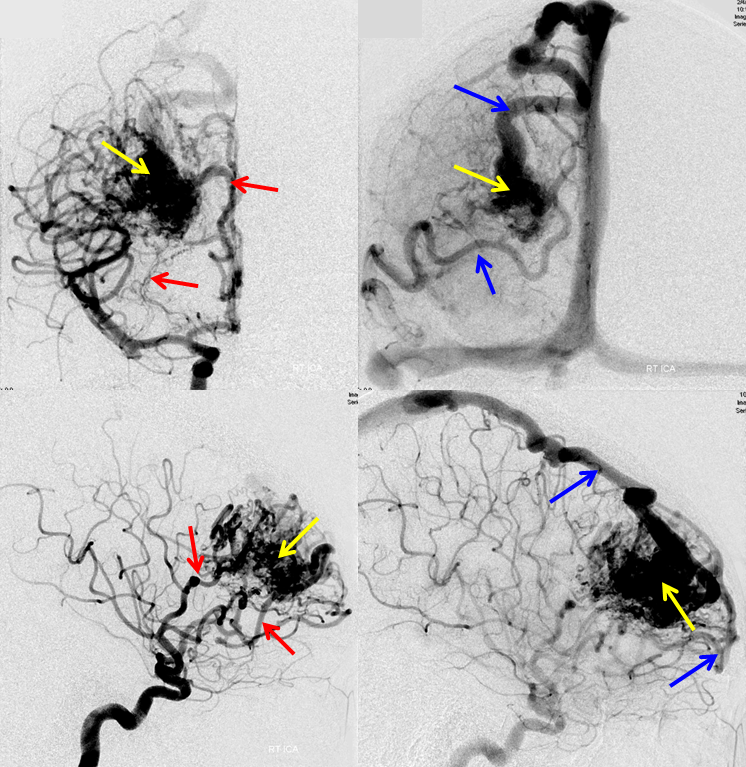 Frontal (top row) and side (bottom row) images of the AVM obtained during pre-surgical angiogram and embolization.  The AVM (yellow arrows) is supplied by numerous arteries, some of which are shown by red arrows, and emptied by one larger and one smaller veins (blue arrows). 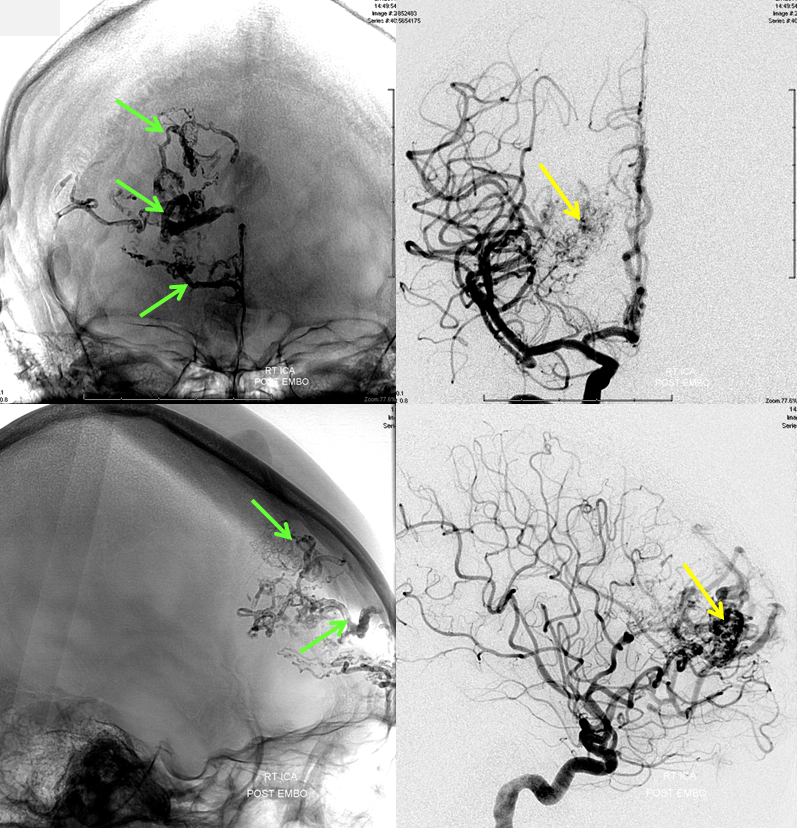 Front (top row) and side (bottom row) pictures of the AVM after n-BCA embolization.  Glue (n-BCA) material is seen within AVM arteries and nidus (green arrows).  The AVM is significantly smaller after embolization.  As is typically the case for AVMs of this size and location, the entire AVM cannot be embolized safely, and requires surgery for complete cure. 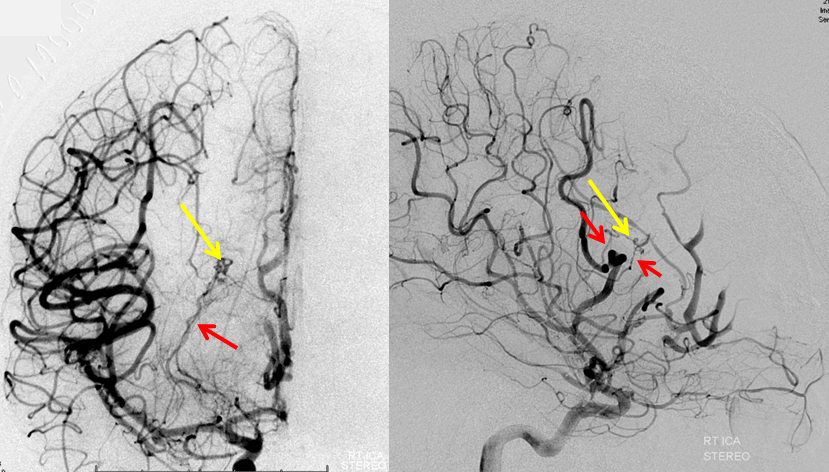 An angiogram is obtained immediately after surgery, to make sure that the entire AVM has been removed, which is almost always the case.  In this particular patient, a small AVM remnant is still present (yellow arrows), with its feeding arteries marked by red arrows.  This shows the value of performing an immediate post-surgical angiogram.  The patient has go back to the operating room to remove the remainder of the AVM. 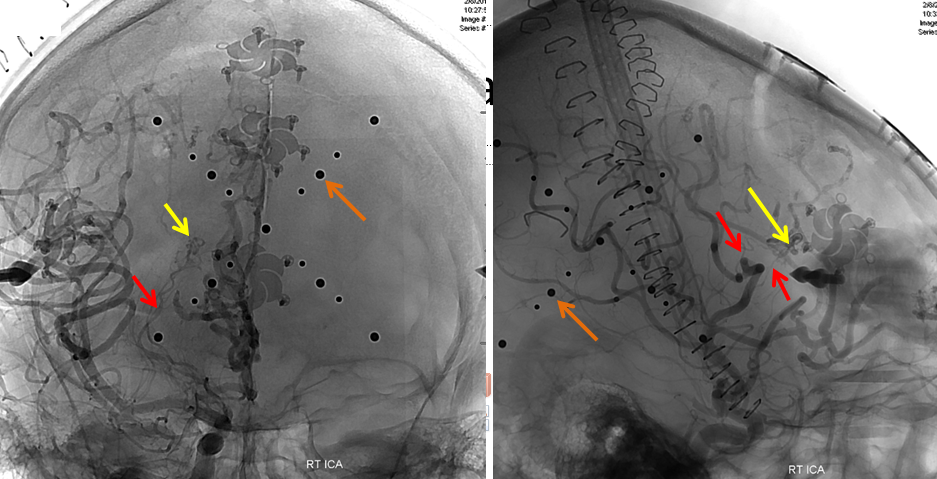 A special frame has been placed around the patient’s head before the second surgery, with multiple round markers (brown arrows) which are visible on this angiogram. The headframe, developed at NYU, allows for extremely precise targeting of the residual AVM, to spare brain tissue in this importat part of the frontal lobe. 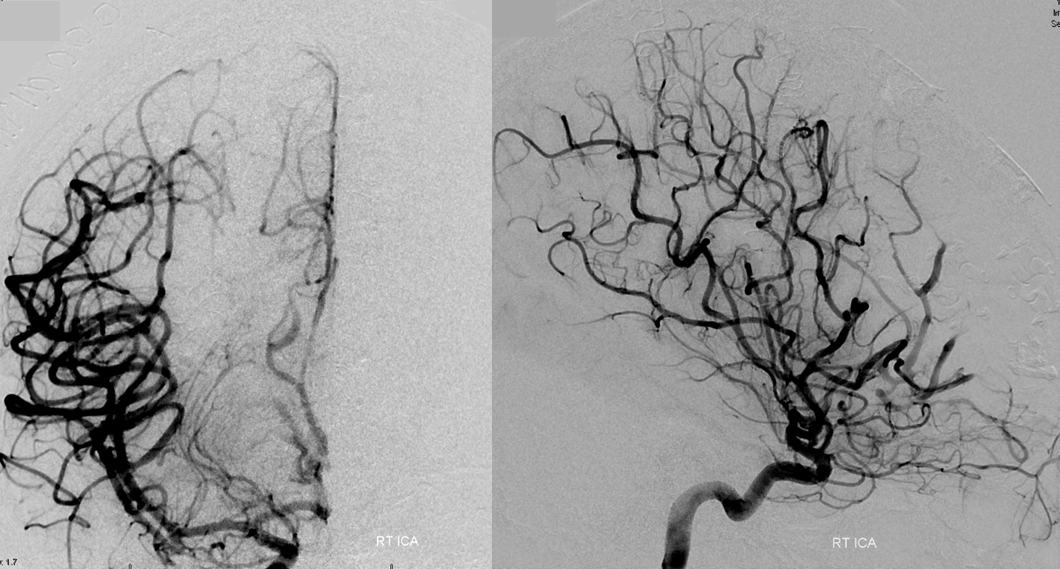 Finally, after the second surgery, the entire AVM is gone.  The patient will return for another angiogram 1 year after surgery, which is standard practice for such cases at NYU.  Younger patients are also required to obtain an angiogram some time after they complete puberty