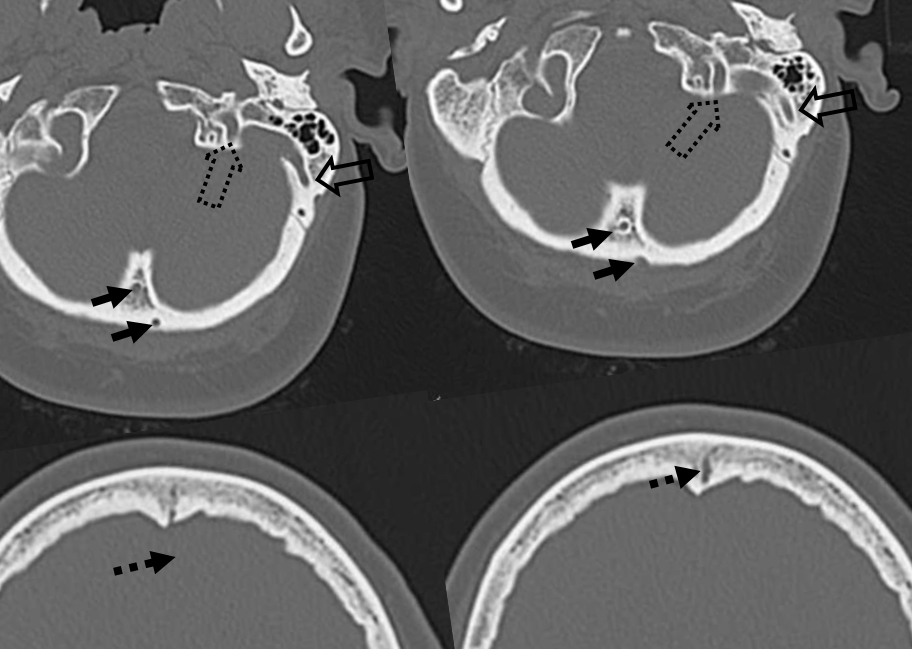 These are simply other holes for blood to leave skull, besides the named holes — like jugular foramen, foramen ovale, superior orbital fissure,etc.  The big picture of anatomical understanding is “spectrum” and “balance”  Everything that works like it should in the body is in balance, or “harmony” if you will.   Veins are just another example. They are like rivers — the size of a vein is equal to the size of all its tributary veins (streams joining river), which itself joins another river on its way to the sea or ocean (heart).

Emissary veins are just quasi-random holes in the skull, serving as outflow for (usually) sinus blood.  There is rationale to this, however — they are in balance with the “typical” outflow — sigmoid sinuses via jugular foramina, and other ways such as marginal, petrosal, or cavernous sinuses.  The most direct balance is with jugular outflow — the less prominent that is, the larger the emissary veins.  Examples are condylar veins — constant enough to get a name — and many unnamed holes.  The idea is the same though. (BTW, we are not addressing here position-related differences between jugular / emissary vein outflow — supine vs sitting vs standing — the need to preserve outflow balance, and balance in general, especially if you are upside down, stands regardless)

Jugular veins are often narrowed in the cervical segment, between the C1 lateral mass and stylomastoid process / ligament.  There is a spectrum of stenosis here — the more stenosis, the bigger the condylar and emissary veins will be — that’s the balance.

It is extremely short-sighted to stent these extrinsically compressed jugulars. They are nearly always asymptomatic.  In the very few cases when they are symptomatic (intracranial hypertension or pulsatile tinnitus) the solution is surgical (extrinsic) decompression.  Stenting is usually a terrible idea, with metallic stent rubbing against bony structures, nerve palsies, etc.

Below are examples — this patient has the typical anterior (dashed open arrow) and posterior (solid open arrow) condylar veins.  More unusual is a frontal emissary vein (dashed arrows) and the torcular emissary vein (arrows).  The anterior frontal ones can be surgically treacherous when especially large — the old story of a large vein on someone’s forehead that you don’t want to mess with because it drains both frontal lobes… 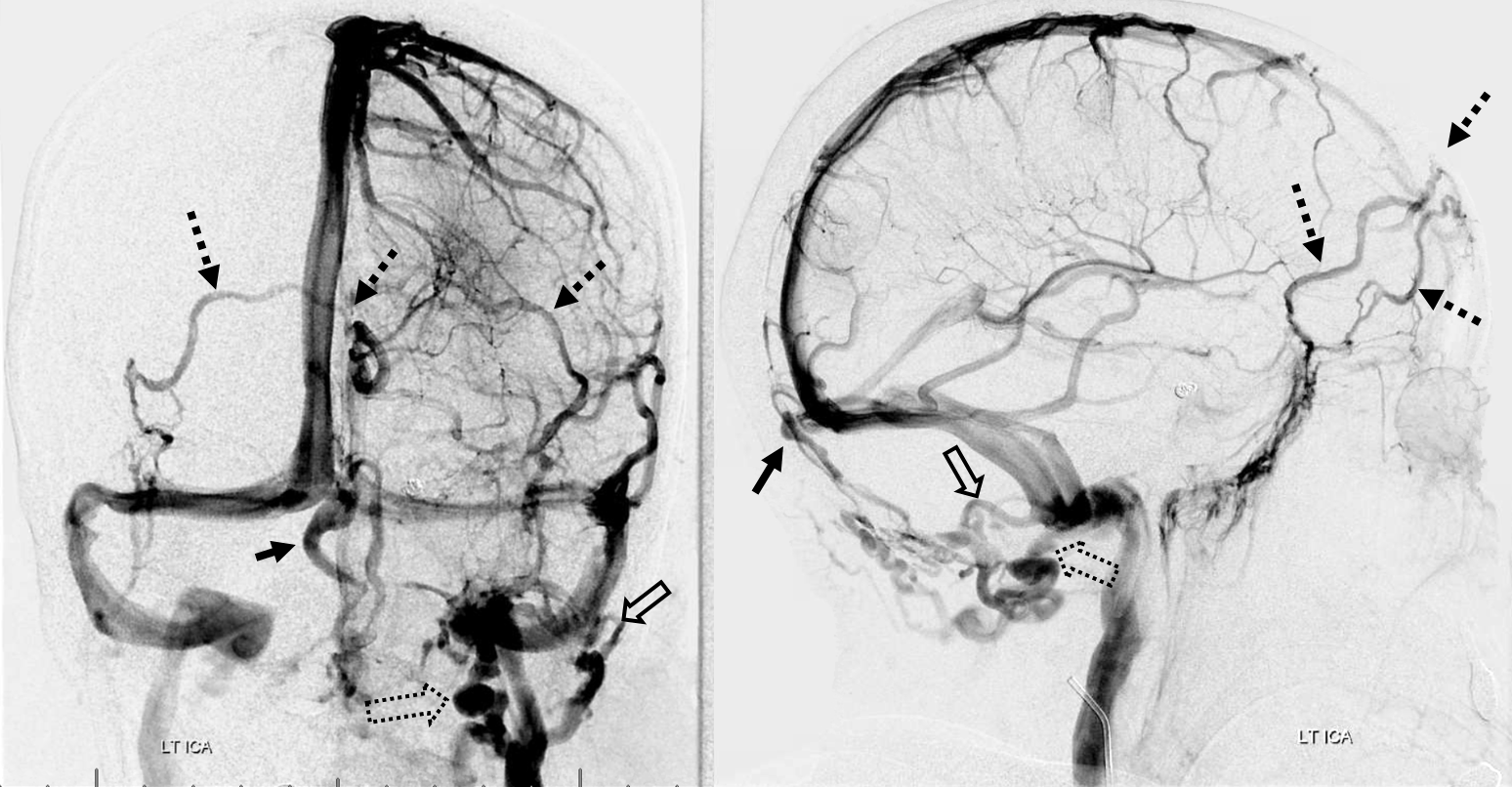 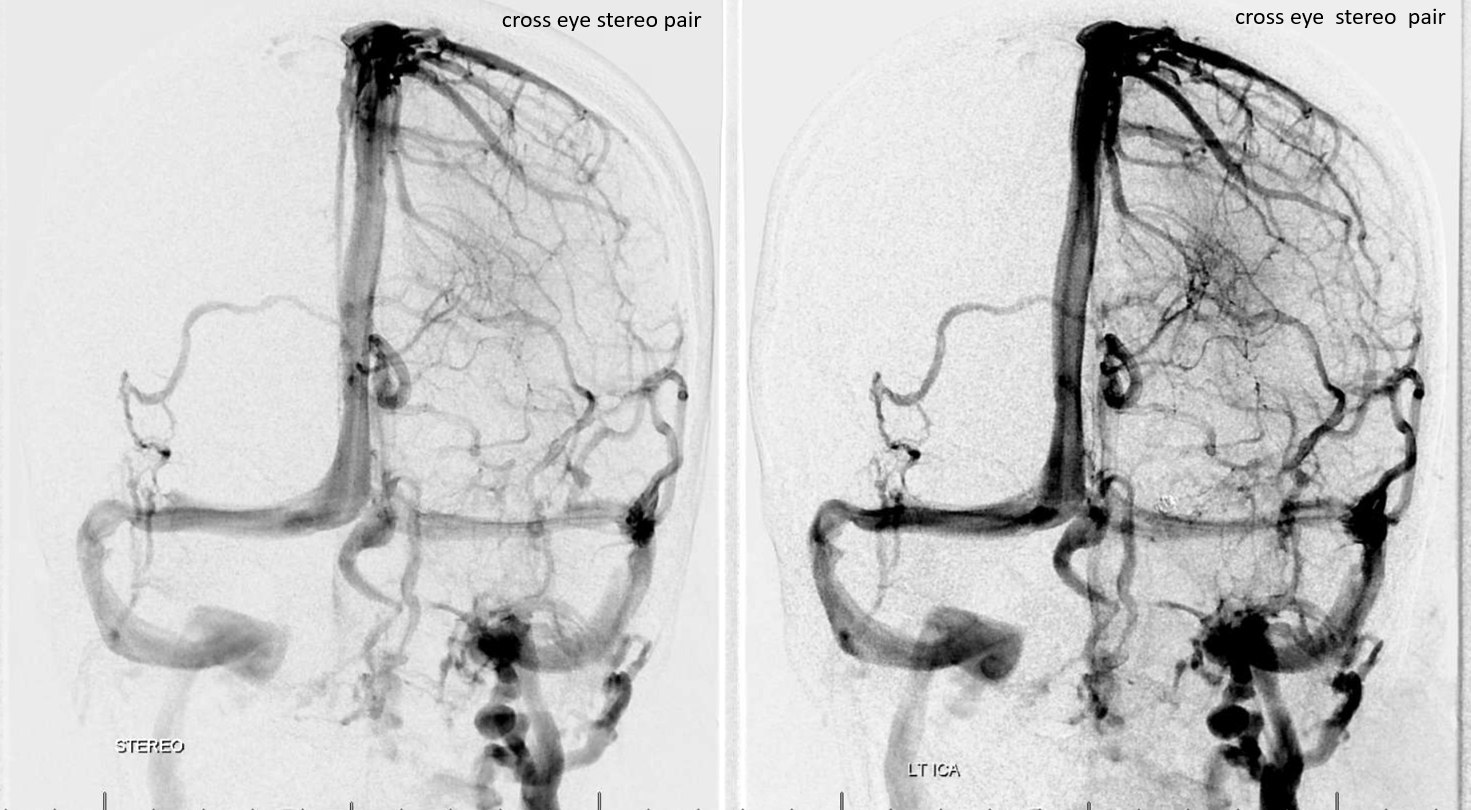 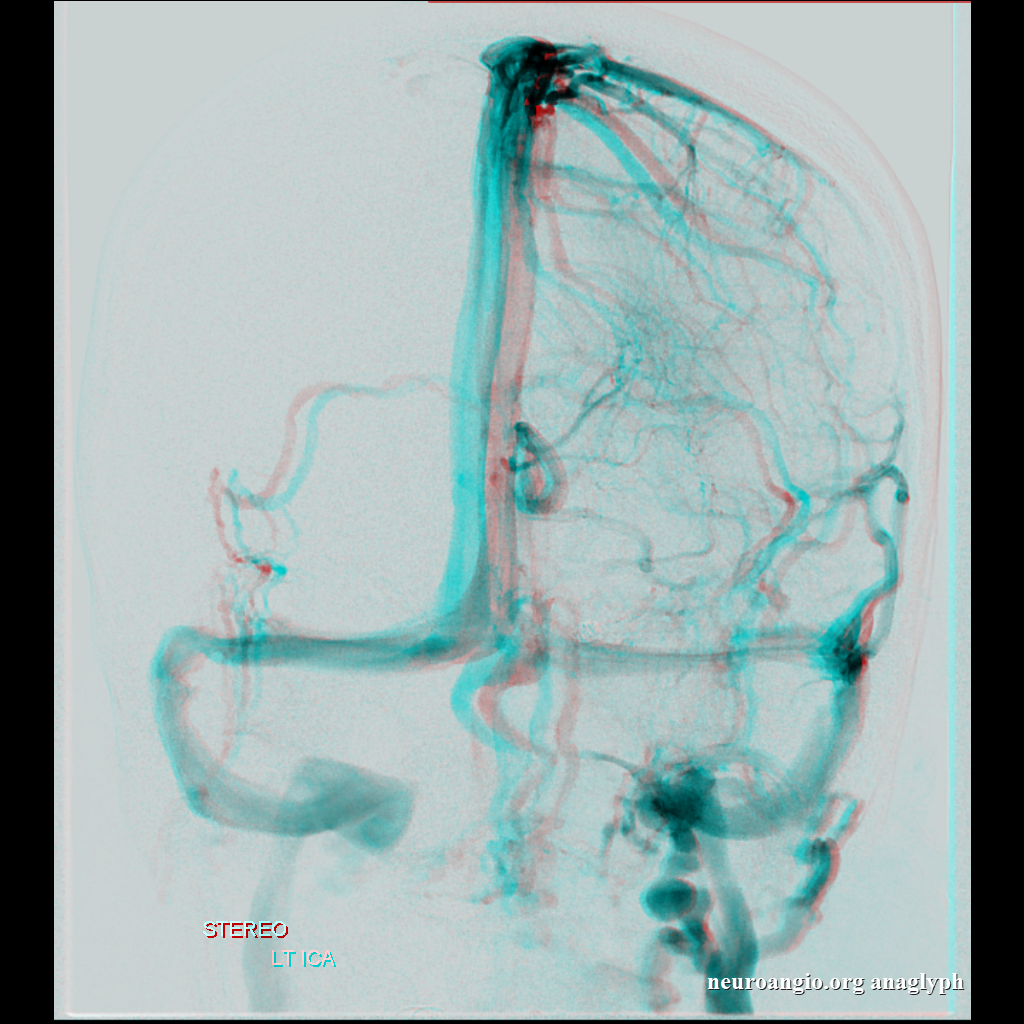 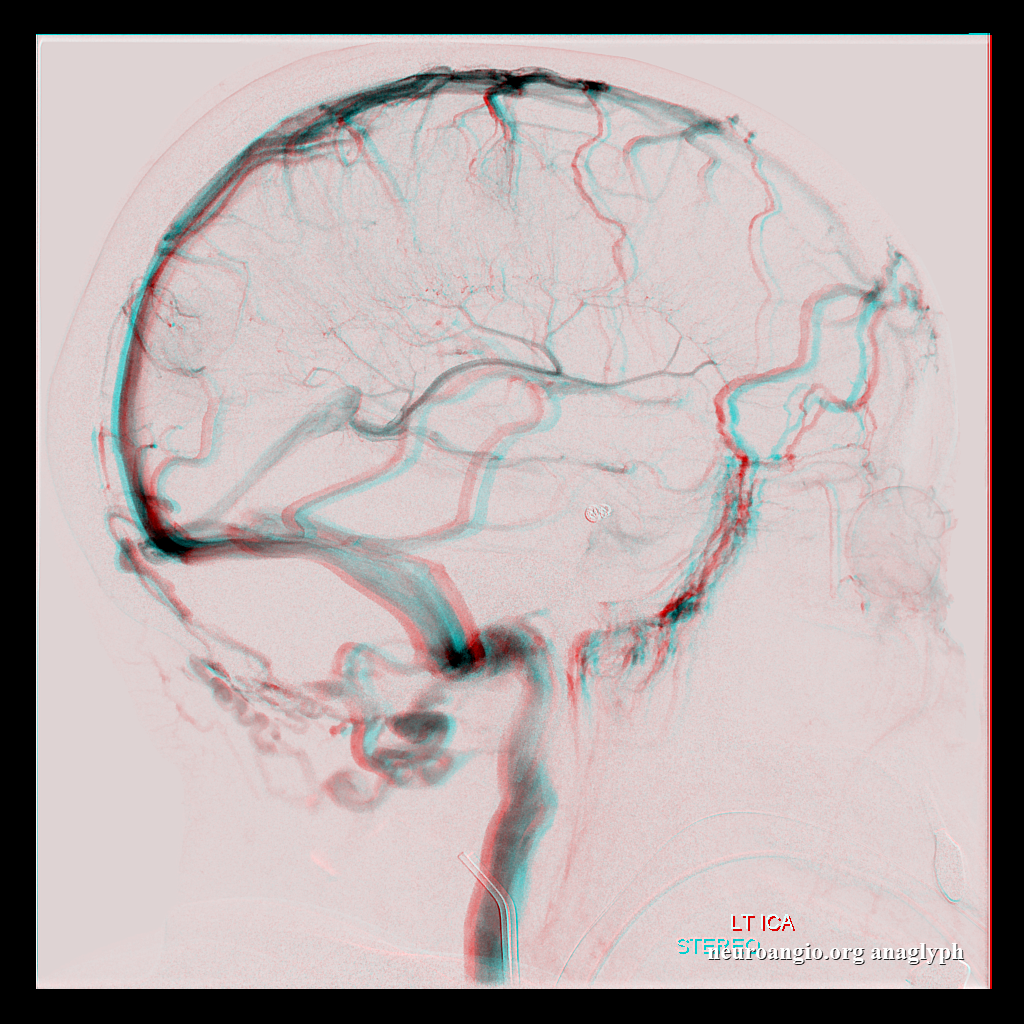 Look for these holes on thin-section CT 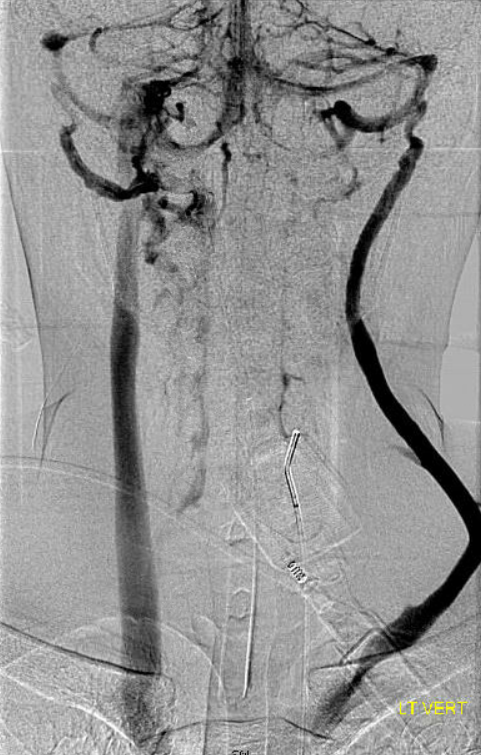 Its important to appreciate how inconspicuous these holes / veins look on cross-sectional imaging.  Check out his post-contrast MRI — the veins are not labeled, but you can figure it out based on labeled CT below 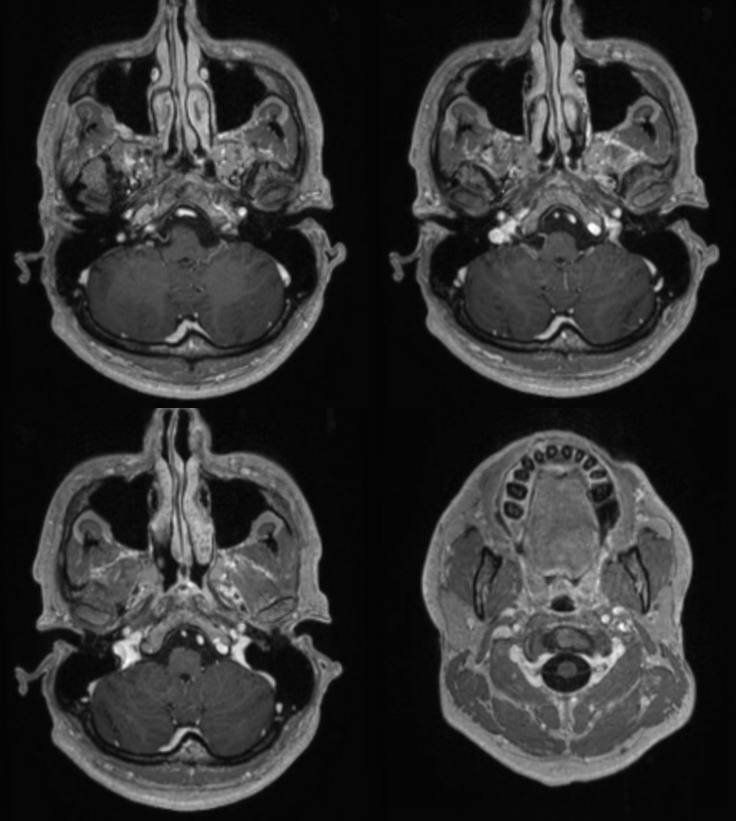 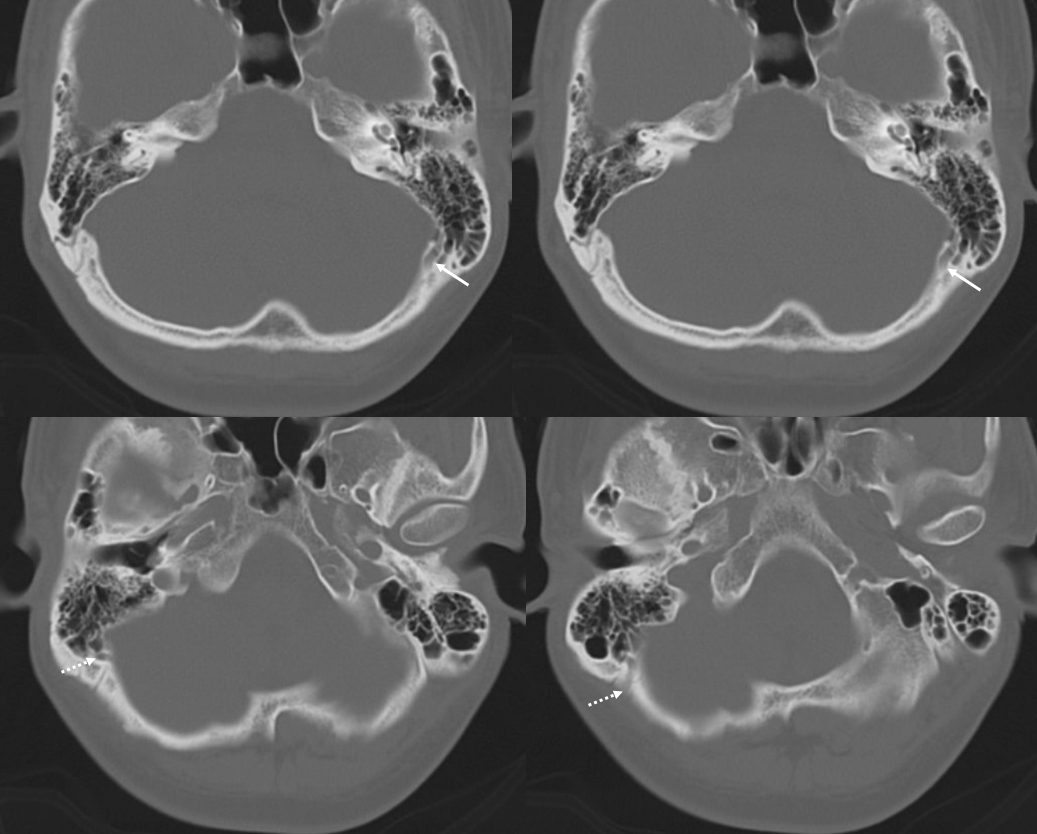 Again, the key is to understand their functional significance despite relatively small size. The reason is simple once you think about it — its about pressure gradient.  No one is surprised to find a 3 mm diameter carotid carry tremendous volume under high flow.  Why can’t a 3 mm vein do that?  Yes, it can — if the pressure gradient was as high as on the arterial side.  Of course, that is not possible physiologically.  But, for the emissary veins above, a gradient of about 15-20 mm between intracranial and extracranial compartments produces tremendous flow — as seen above.   The implication is — these holes are important.

The “spectrum” approach to understanding venous anatomy and any anatomy actually is important.  Usually there are multiple routes of venous drainage for a given structure.  Sometimes, they are in balance, other times one may dominate over others.  The reason one is dominant is because the others are hypoplastic or constrained.

The most common reason for prominence of mastoid/condylar veins is either hypoplasia or stenosis of the jugulars.  The most common cause of jugular stenosis is extrinsic compression between C1 lateral mass and the styloid process.  Sometimes this can lead to pulsatile tinnitus.  It is important to recognize that stenting these jugulars is a tremendously bad idea.  The stent rubs against bones, and problems develop — stent erosion, laryngeal nerve palsy due to damage in carotid sheath, or jugular foramen nerve palsies if stent is expanded in jugular foramen and crushes them.

Here is an example of this disposition — case courtesy Dr. Cen Zhang 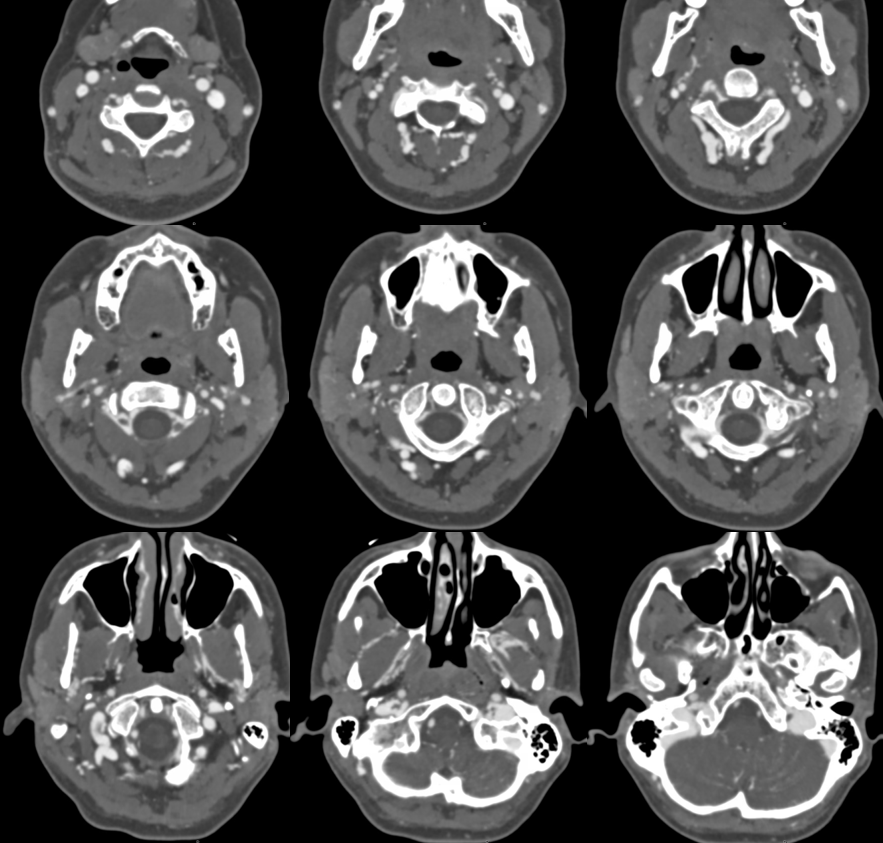 Arrows below — posterior condylar canals (black arrows), right larger than left, and prominent occipital / cervical / vertebral veins (black ovals) are associated with bilateral (right greater than left) compressions of jugulars between lateral masses of C1 and styloid processes (white arrows).  These were mistakenly thought to represent some kind of AVM or fistula — largely because of the terrible timing of this CTA, if it can be called that — basically, this is a vasculogram with both arteries and veins equally opacified. 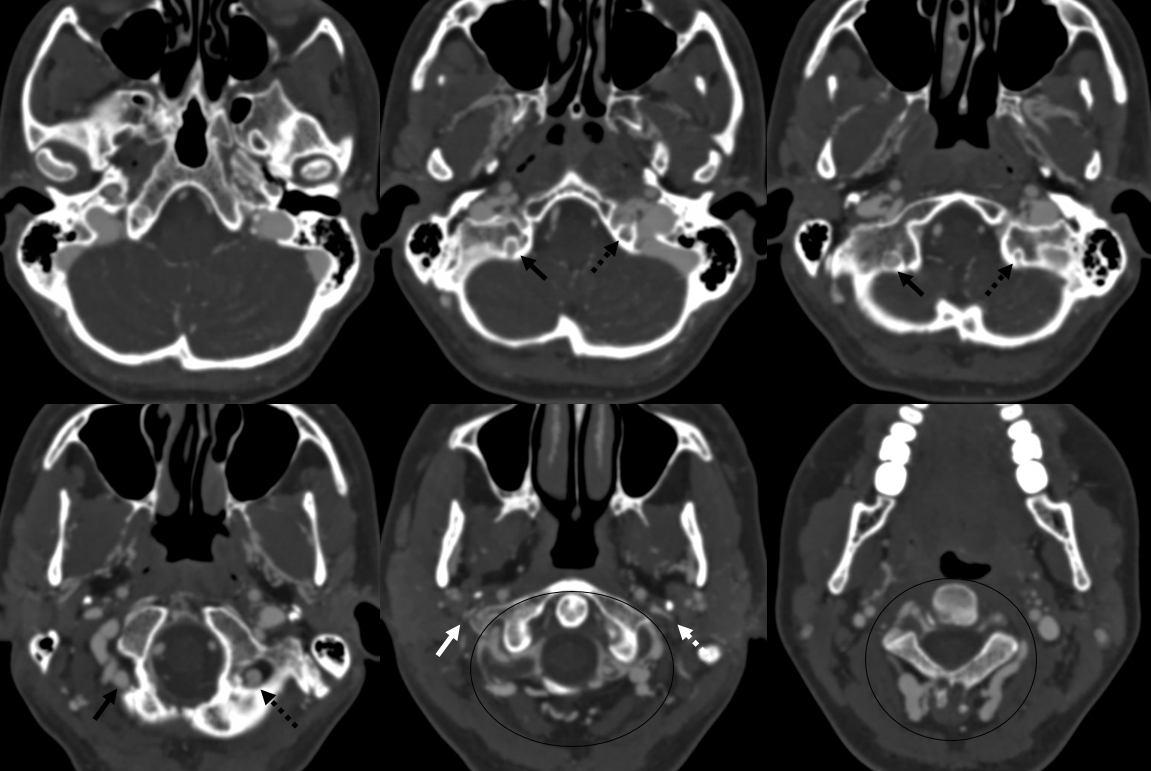 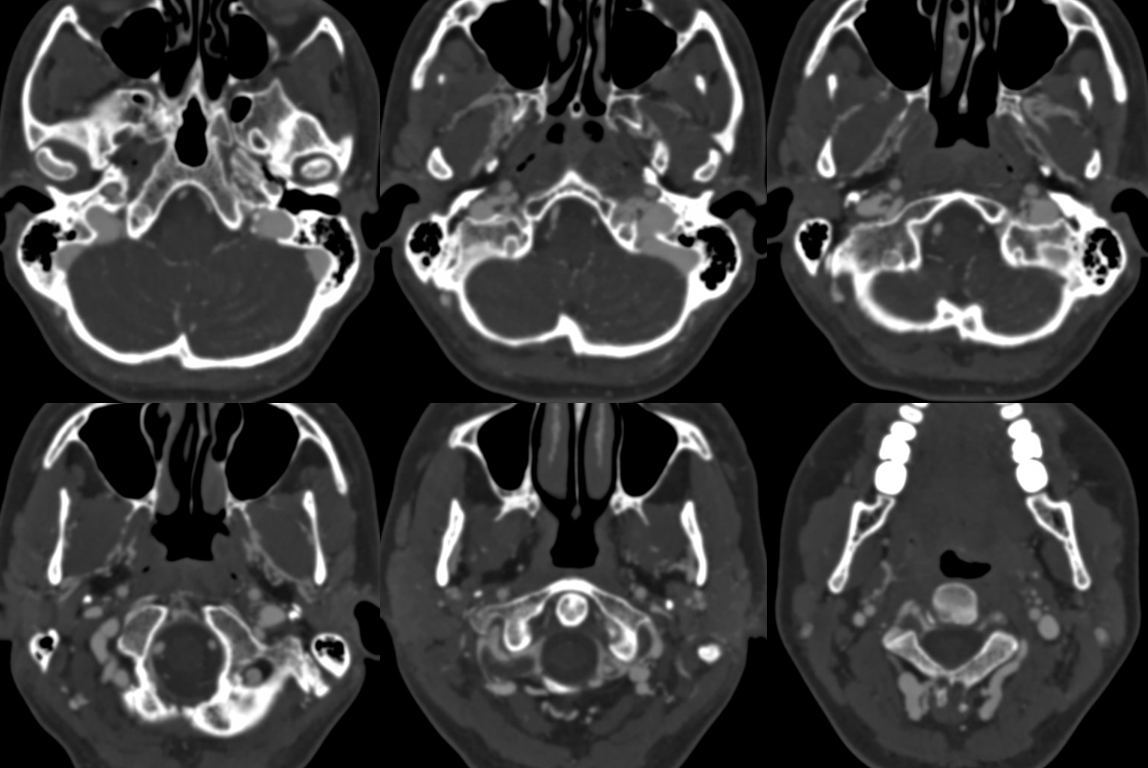 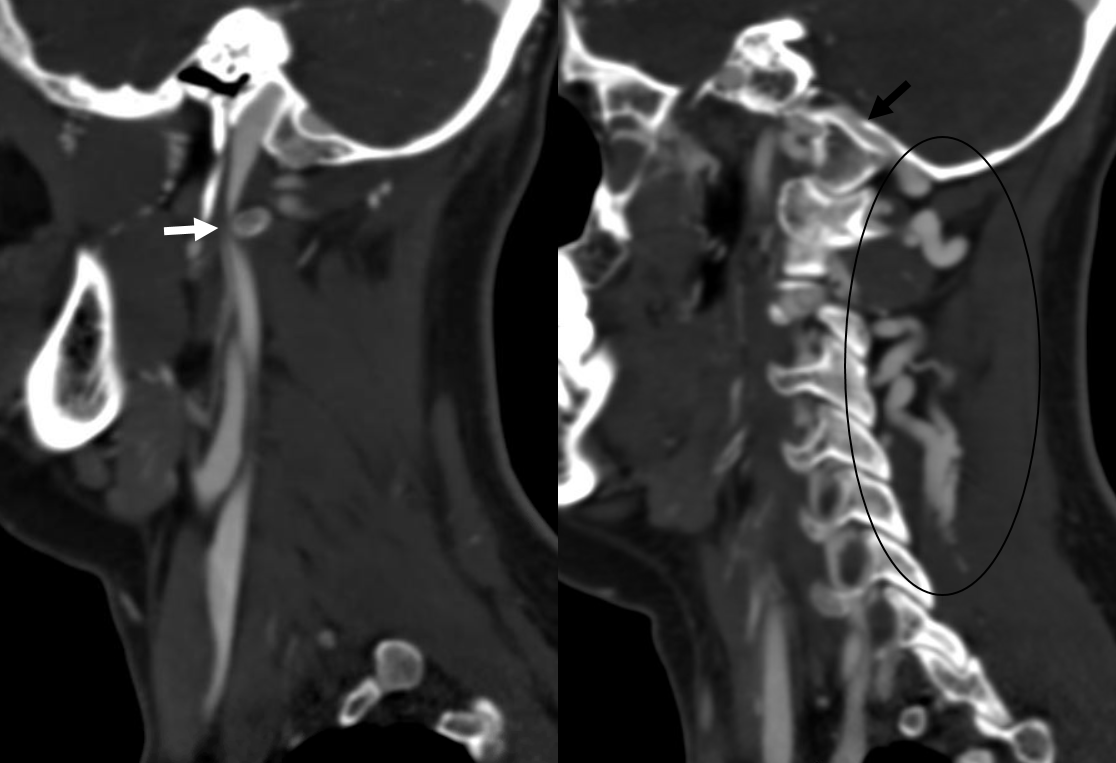 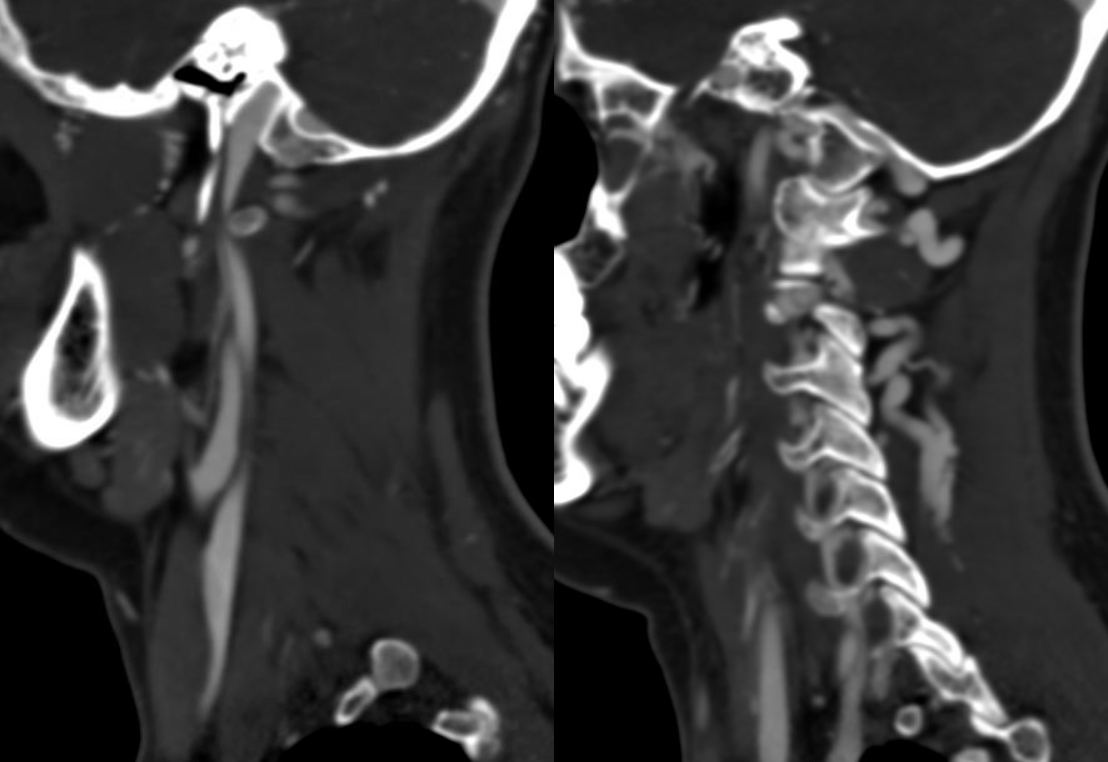 A well-timed contrast neck MRA proves that there is now AVM. However, there are bilateral vertebral dissections… 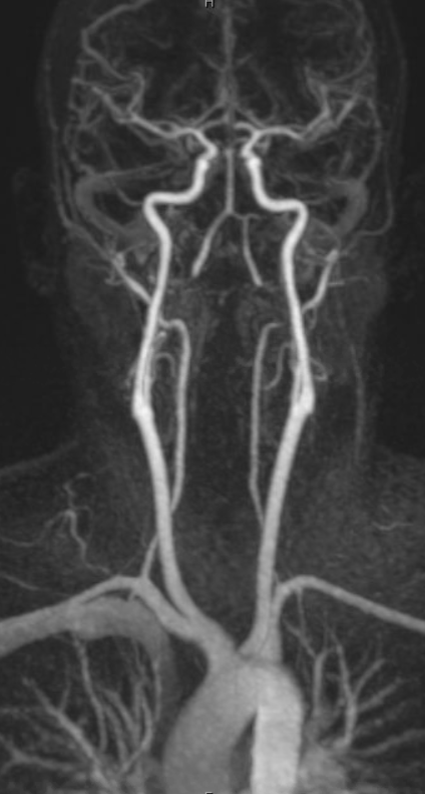 The left one was picked up because of this 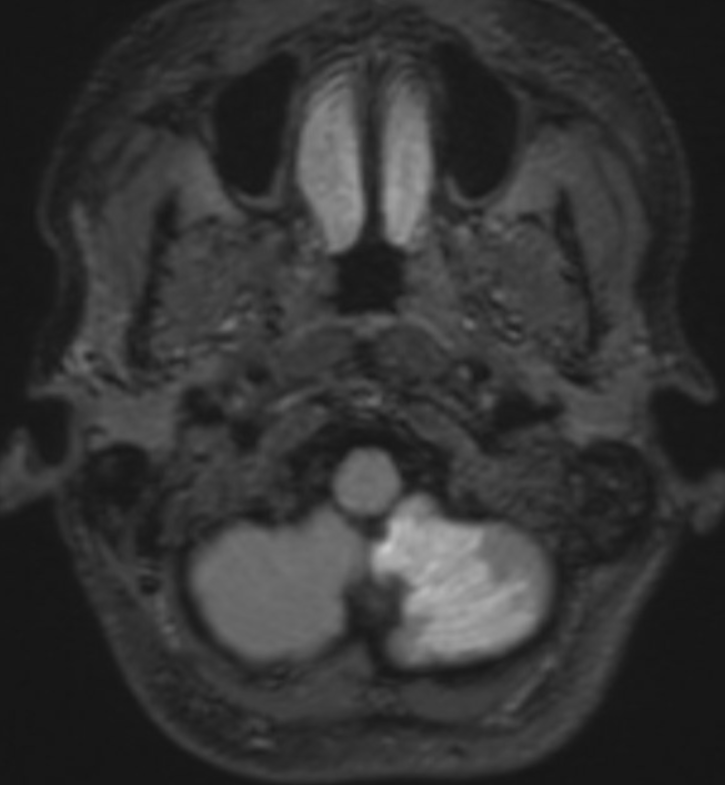 The right one was missed because of “satisfaction of search” on the left, and terrible CTA quality, but well-seen on the MRA 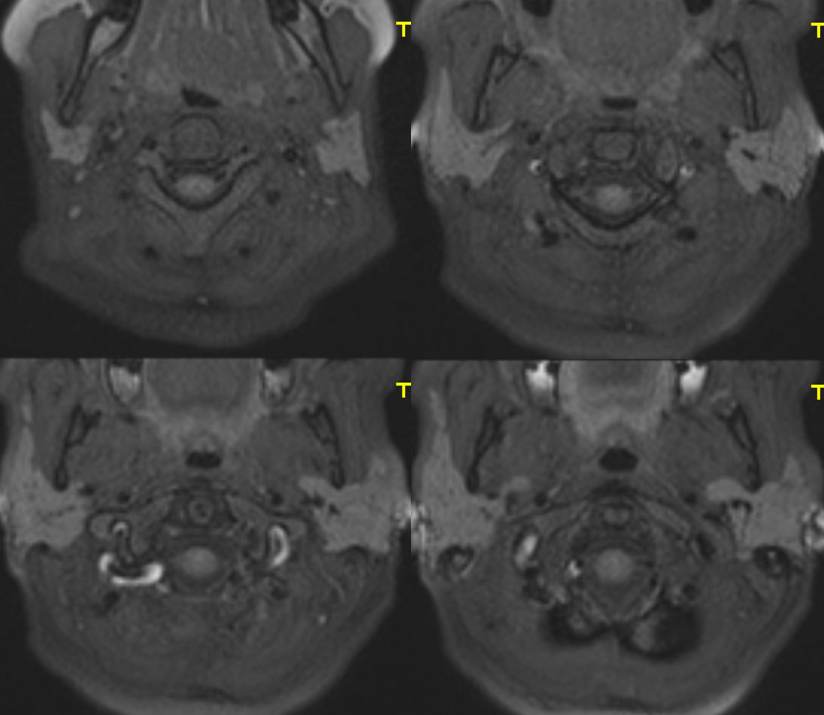 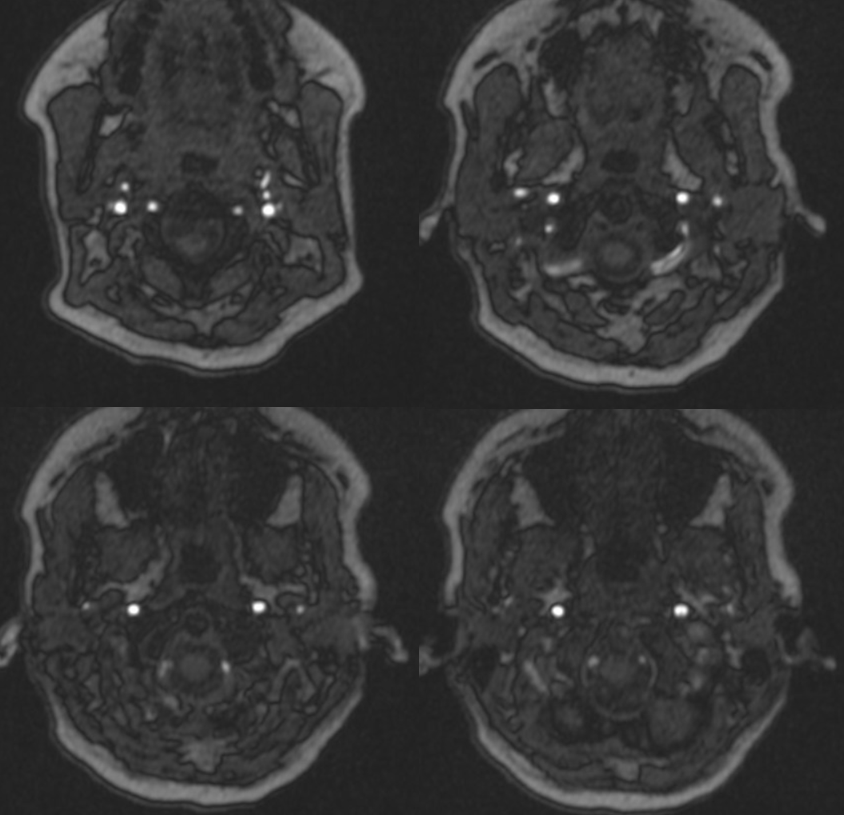 Here is the crappy CTA cut, with arteries in red and veins in blue 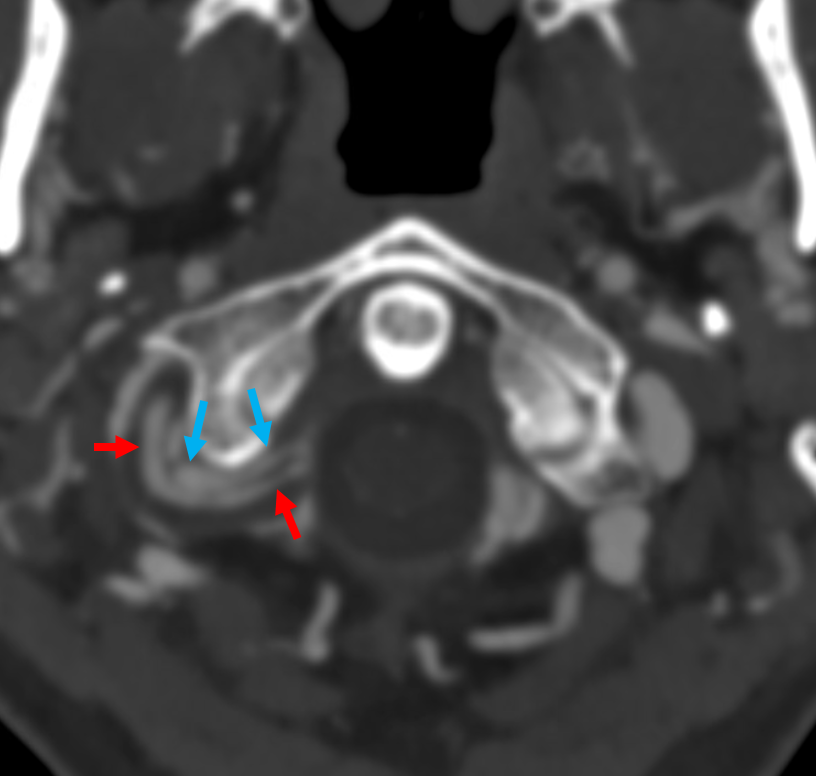 Emissary veins can be a problem or a blessing.  They are a problem when inadvertently damaged during surgery, and retrospectively turn out to have been important.  They can be a blessing in venous occlusive disease.  See link here to a case of Venous Sinus Thrombosis, where a single emissary vein carried the entire superior sagittal sinus and saved the day.  This case is also discussed in out BANANA BITES series.

See image of that case below 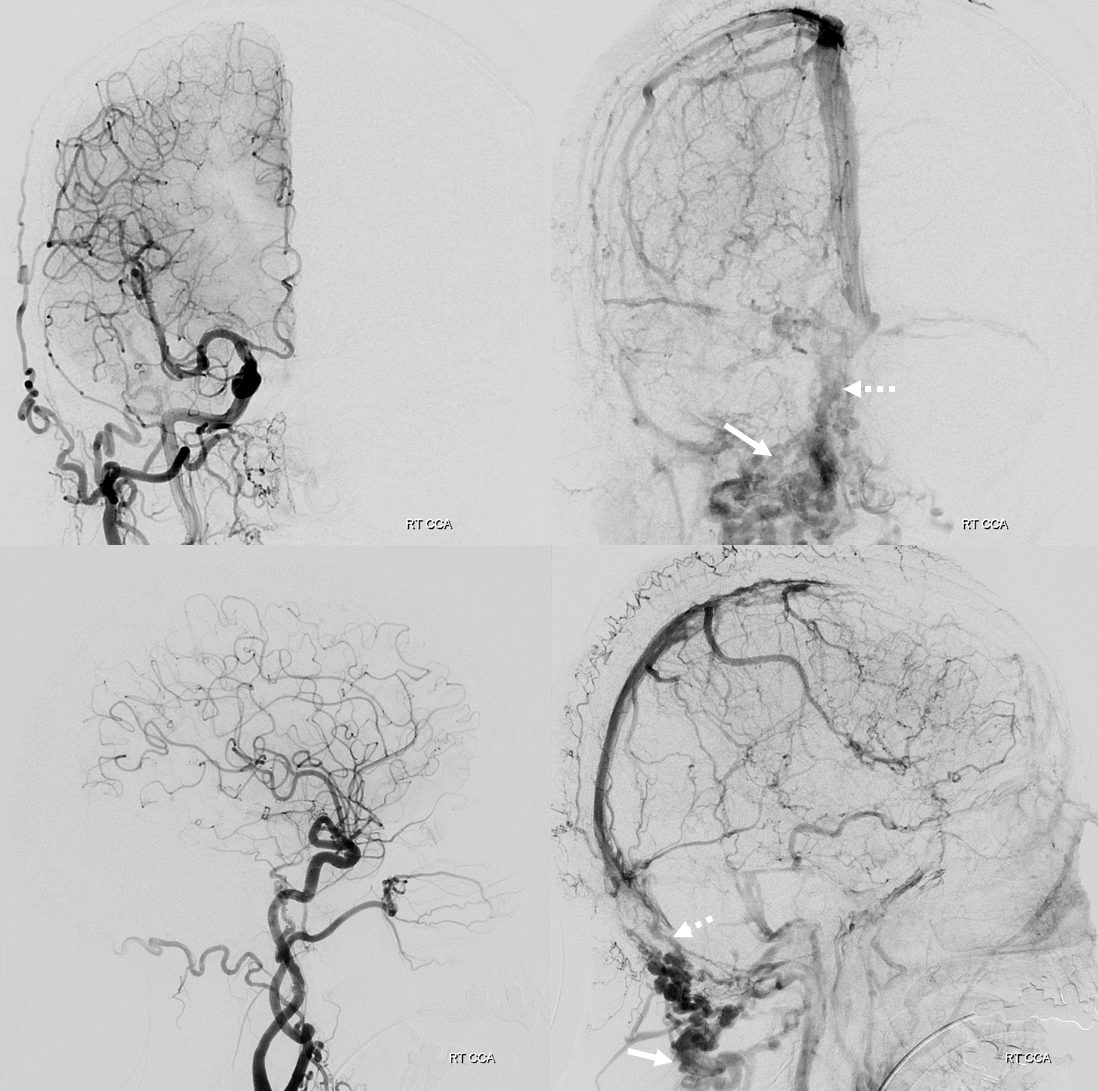