The most under-recognized cause of pulsatile tinnitus is venous sinus stenosis.  It is a common and usually asymptomatic / incidental finding.  However, that is not always the case.  Some patients develop pulse-synchronous tinnitus due to turbulent flow across the area of stenosis.  The stenosis is usually in the sigmoid sinus, and almost always “mirror image” bilateral. The sound is typically on the side of the bigger sinus.  The hallmark of venous pulsatile tinnitus is the ability of patient to supress the sound by ipsilateral jugular compression.  This simple and reproducible maneuver stops or markedly reduces flow in the entire transverse/sigmoid/jugular pathway.  Even in patients with large emissary/subocipital/mastoid veins, jugular compression usually stops the sound completely.  Thus combinatino of sigmoid sinus stenosis ipsilateral to the sound which can be temporarily abolihsed by jugular compression is virtually diagnostic of sinus stenosis as cause of pulsatile tinnitus.

This patient presents with several years of severe right-sided pulsatile tinnitus with unrecognized venous sinus stenosis, which is very easily seen on standard post-contrast T1-weighted images.  Mirror image stenosis on the left is standard.  Sound is usually on the side of bigger sinus with more flow. This patient had the classic history of PT completely suppressed by right neck compression.  Also present was an infrequent but even nicer sign of sound being accentuated by compression of the other (left in this case) side of neck, which occludes left jugular vein and increases flow on the right, symptomatic side, even more, making the sound louder still. 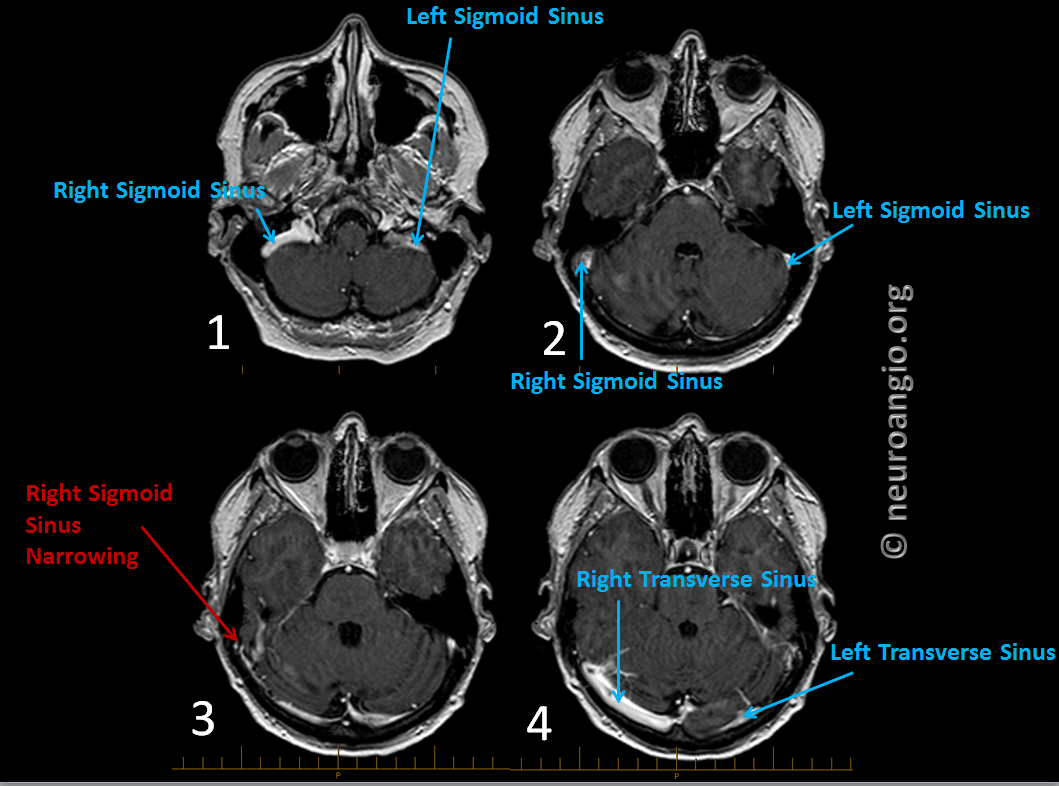 Angio.  Frontal right ICA views. Notice relatively earlier drainage of superficial sylvian veins (blue arrow) via the lateral compartment of the cavernous sinus (purple) into the pterygopalatine venous plexus (pink). There is likely increased pressure in the sagittal /transverse/sigmoid sinus pathway due to the stenosis (red arrow), which thus lags behind superficial sylvian drainage which is under normal pressure

Oblique view profiling best the stenosis. It is likely caused by a collection of arachnoid granulations which are seen as lucent areas a the level of stenosis 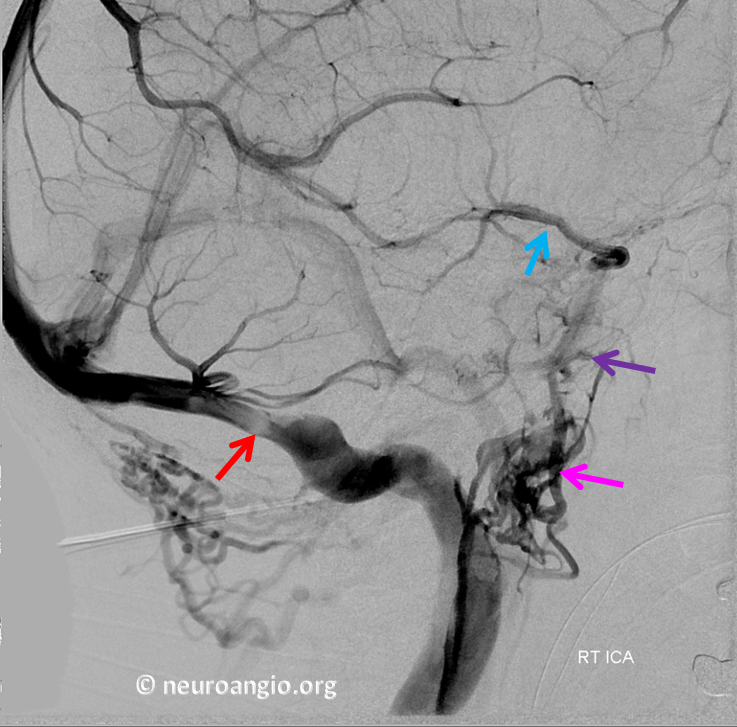 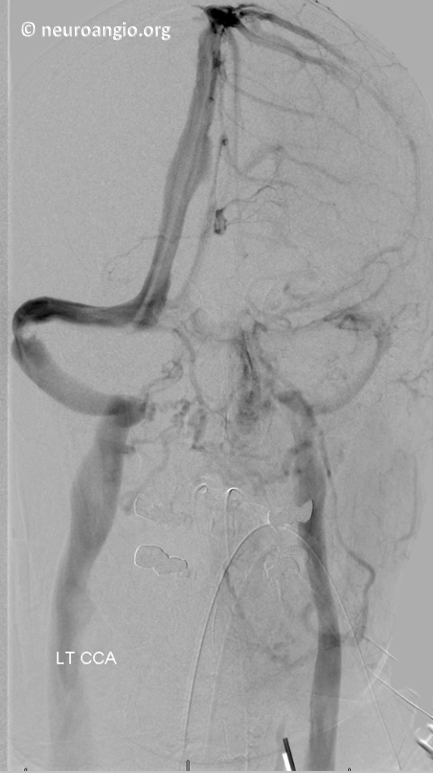 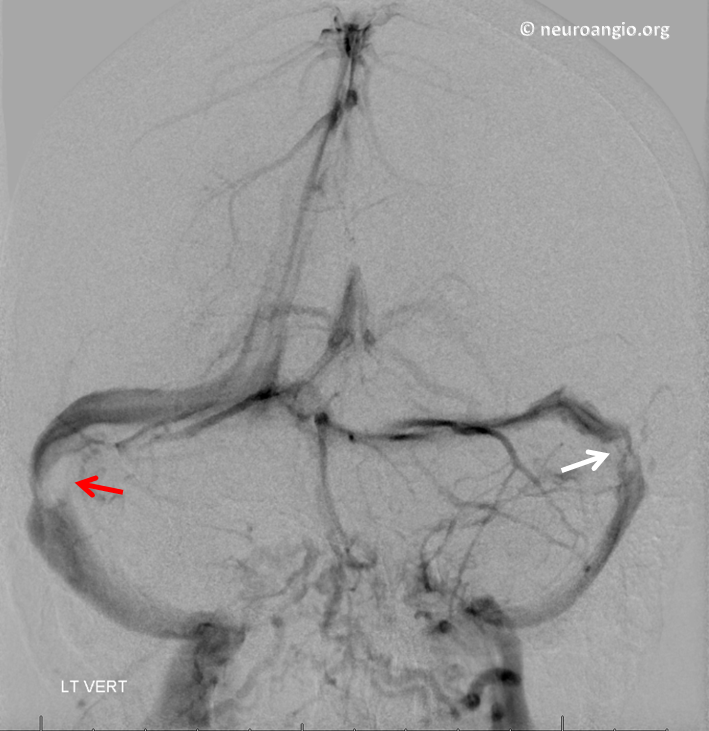 Pressure measurements, 26-28 cm Hg at superior sagittal sinus and 18 cm Hg at jugular vein.  Some pressure gradient is normal due to head positioning.  Normal range has not been established but less than 5 cm is expected. Also, there should be no abrupt changes in pressure over short distance, which is how areas of stenosis usually behave. Here, there was a 4 mm abrupt pressure change across stenosis.  It is not very much (above 5 is better) but given overall clinical and imaging picture is certainly good enough 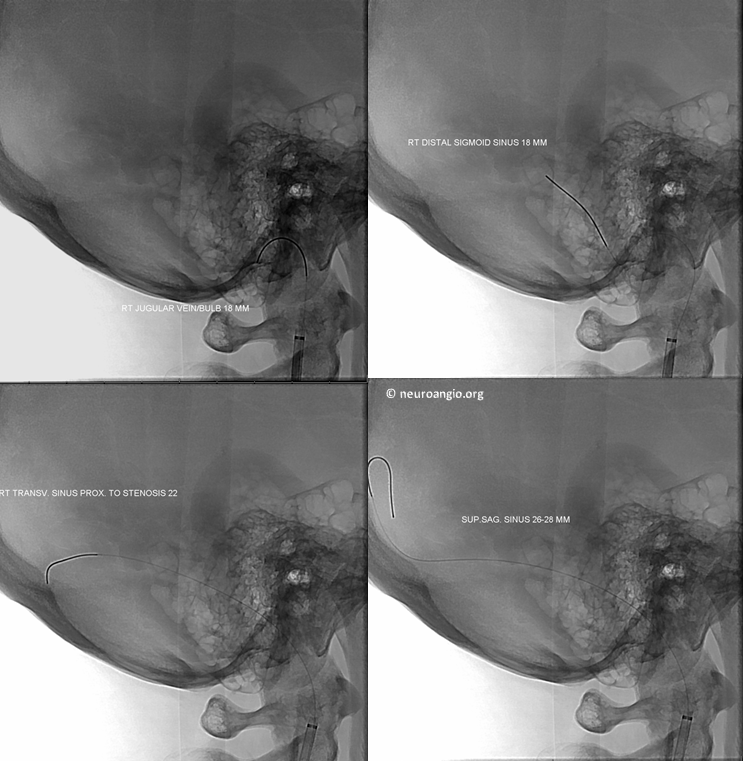 Pre-stent measurements. Notice NeuronMax in the proximal sigmoid sinus.  We use a 90 cm neuronmax as our guide and put it all the way into the sigmoid or transverse sinus over a 5F or 6F Sofia or another intermediate catheter. Having the NeuronMax there really helps advance the stent 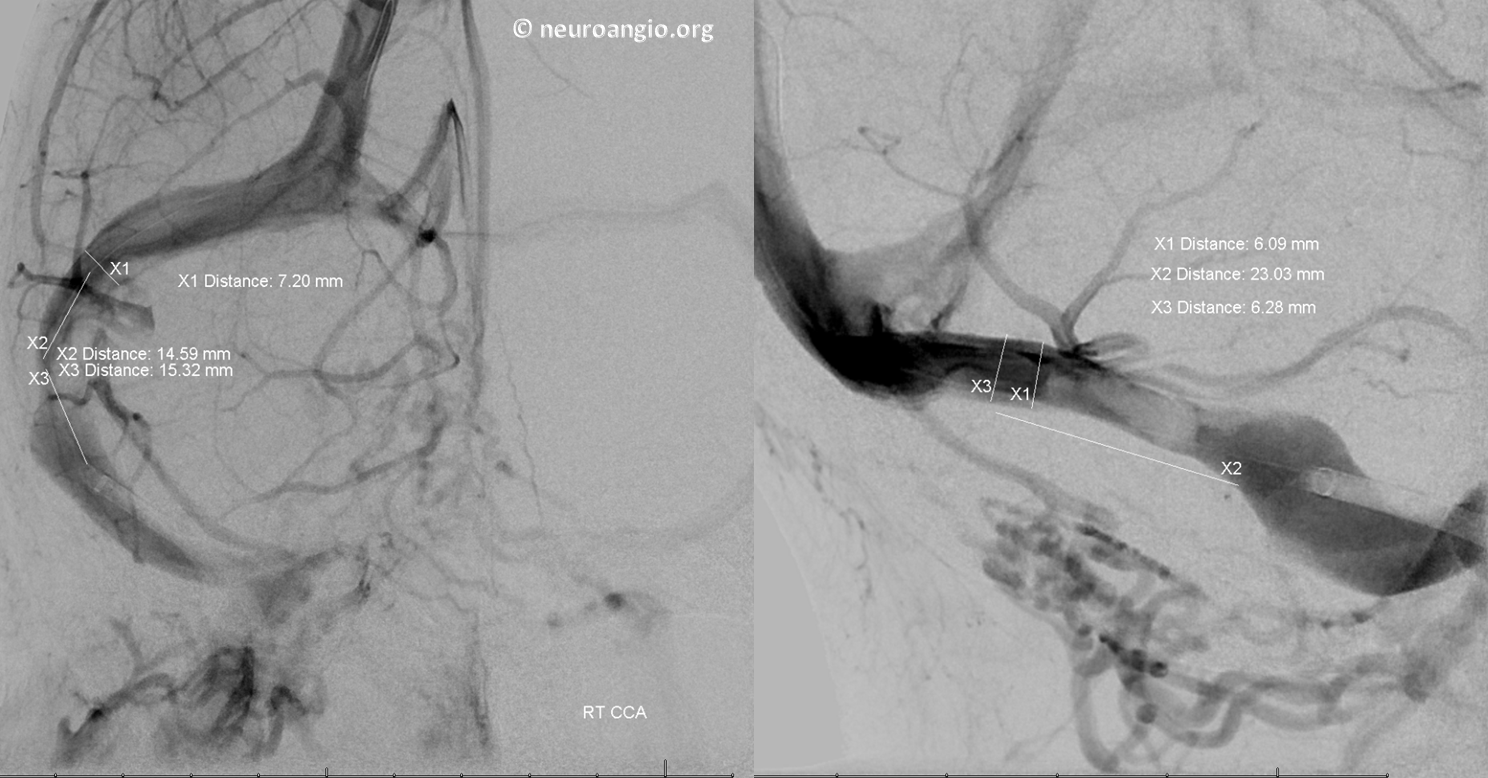 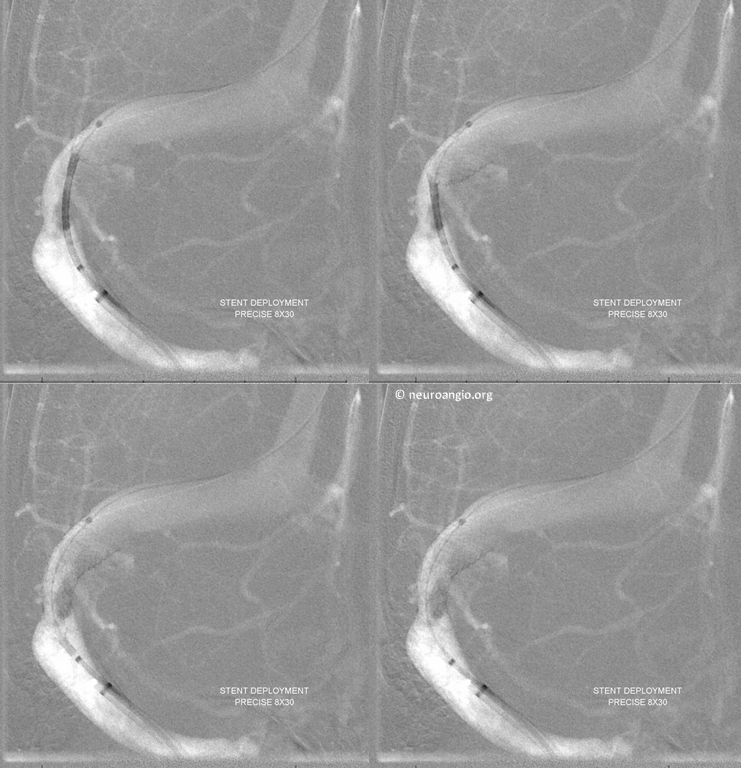 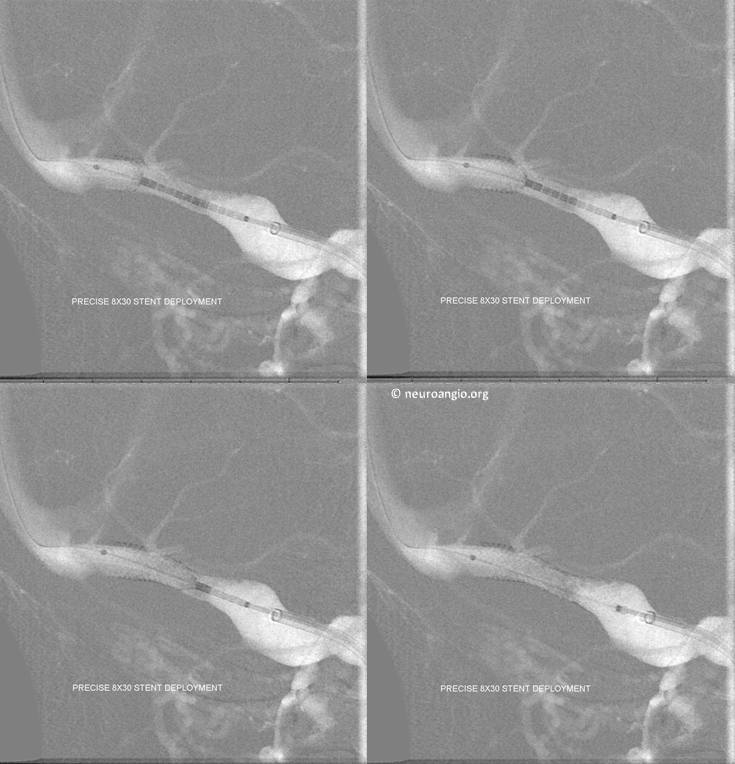 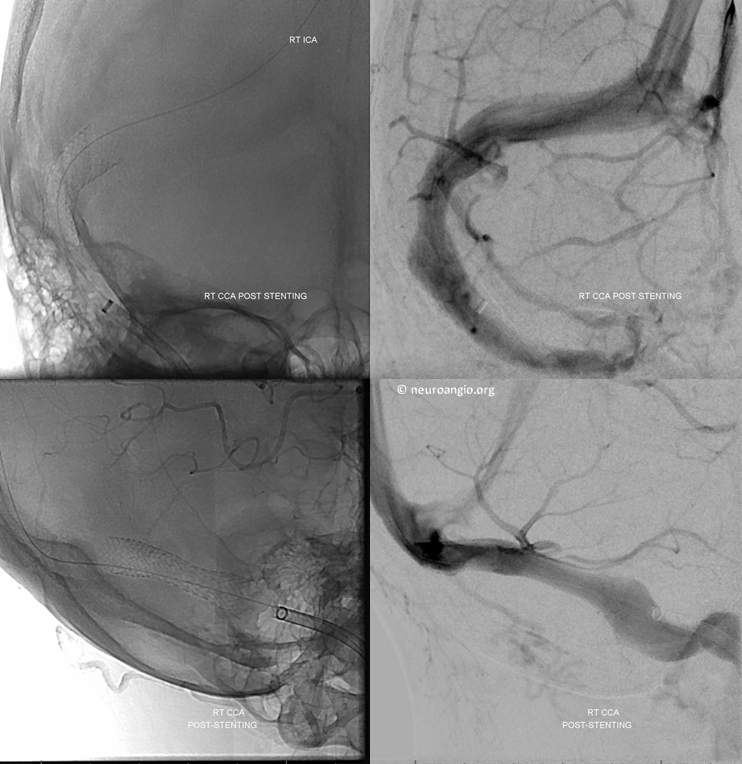 Global views, early and late venous phases. Notice more balanced venous phase flow with superficial sylvian veins no longer being so early draining relative to the sigmoid sinus system.  Also notice increased flow though the right side with no more visualization of left transverse/sigmoid sinuses.  Experience informs us that despite more flow on the right the pulsatile tinnitus will be gone.  It was gone as soon as patient woke up and remains gone. 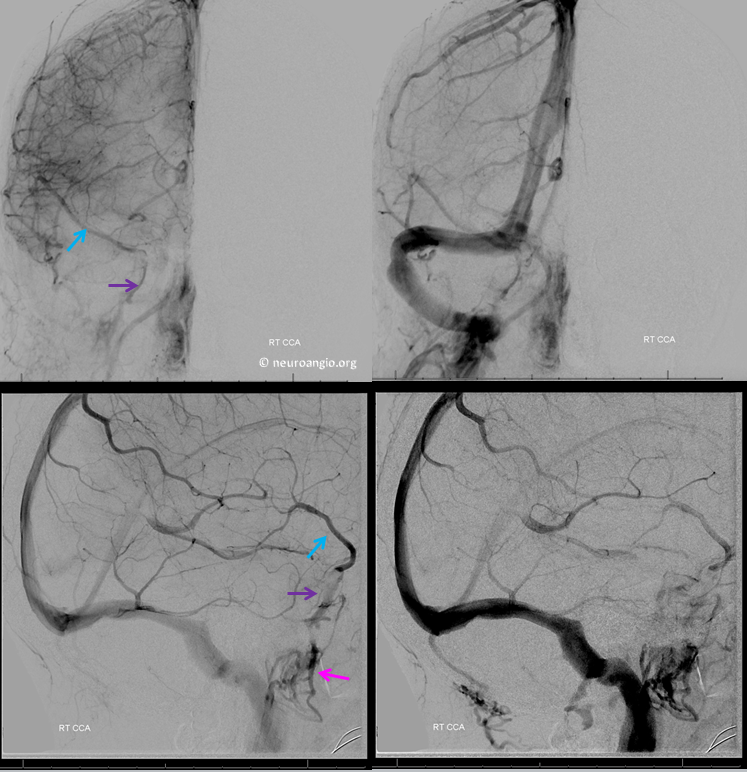