Diagnosis and treatment of intracranial dissection remains challenging.  In general, for all dissections, the diagnosis is primarily based on imaging morphology and location.  Differentiating dissection from other causes of vessel narrowing or aneurysmal dilatation is often not an issue in larger vessels (at least we believe its not an issue).  What happens when vessels are small, and location is nonspecific?  These are the main challenges with intracranial dissection.  The other is awareness — many don’t know that intracranial dissection is possible, or what it looks like.  There are no magic solutions here. But we can highlight some approaches to making the diagnosis, or at least raising awareness of its possibility.

What can we see with intracranial dissection?  A dissection flap, like the one below, is the easiest and surest finding. 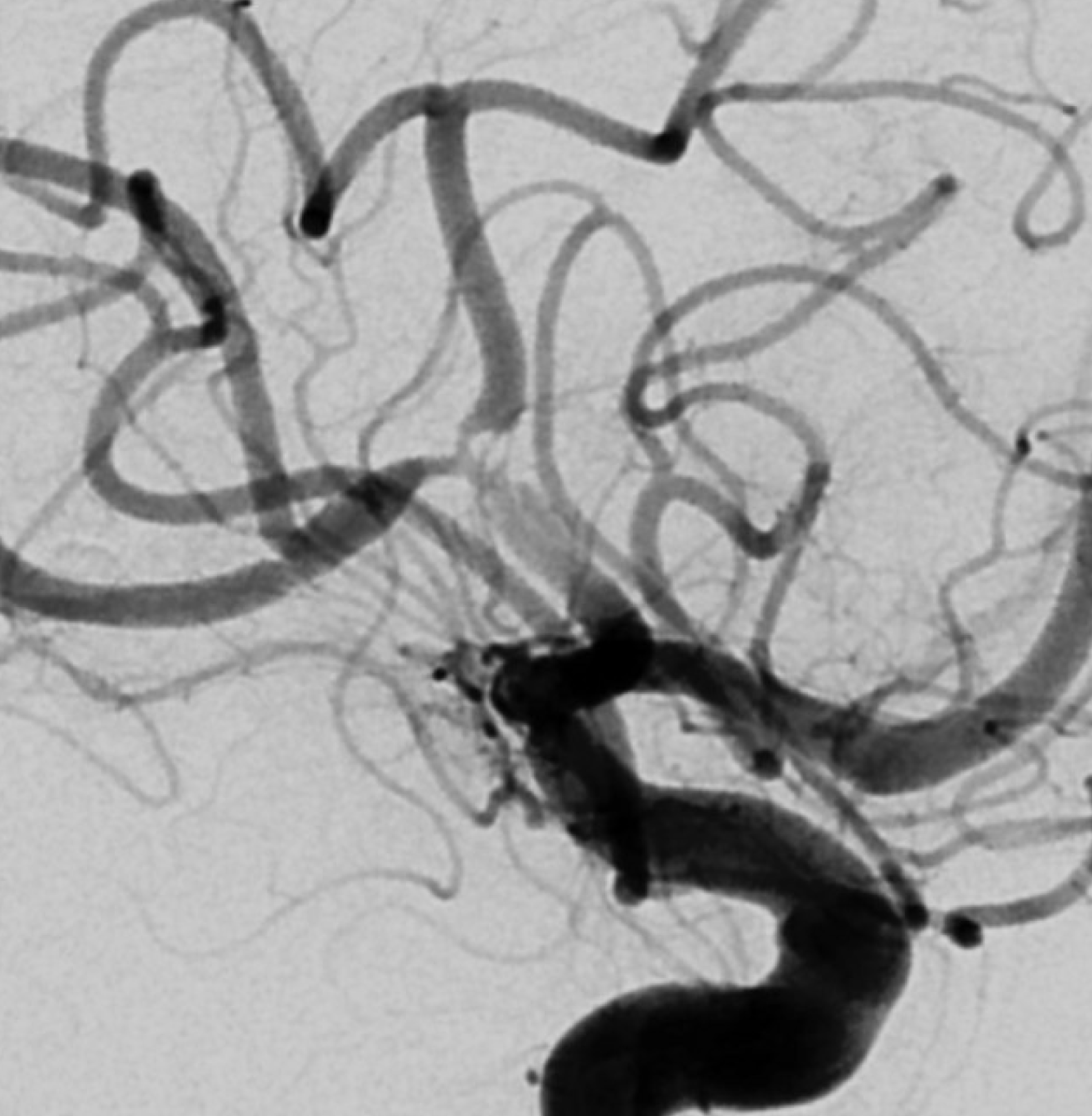 The flap is a false lumen within the vessel wall.  However, if the flap is closed (thrombosed for example), we will not see it.  This seems to be more common with intracranial dissections as compared with cervical carotid or vertebral ones, for example.  In fact, below is the same vessel, with the flap not seen.  Much more difficult. 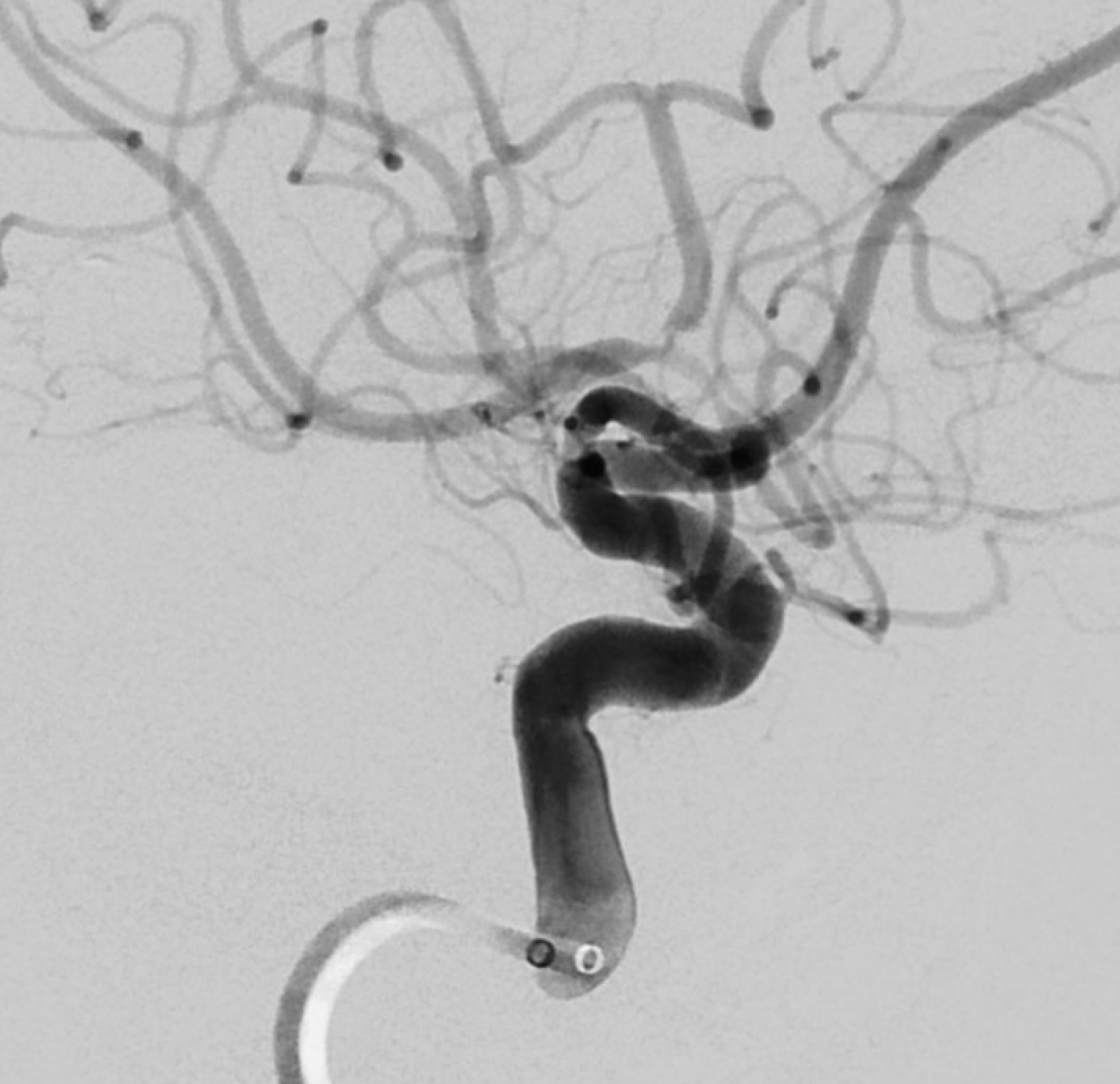 What else can we see?  A spiral, corkscrew-like appearance of the lumen is a secondary sign.  This is most likely the true lumen, though knowing which lumen is patent is harder than it seems.  The corkscrew appearance is a lumen silhouette of the morphology of the unseen false lumen.  Seeing this can be extremely challenging in smaller vessels — see case here.

The angio is highly nonspecific and looks like athero 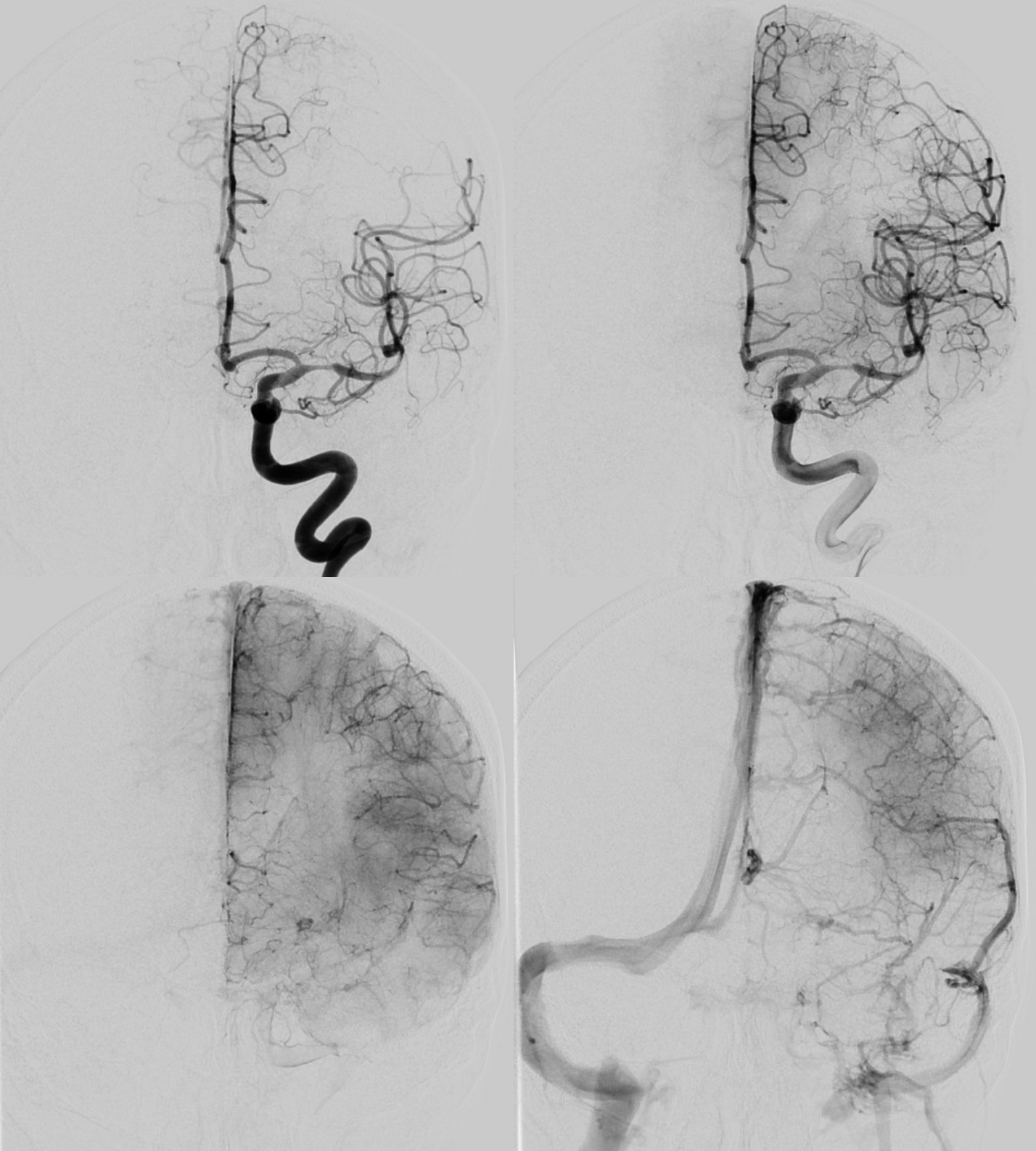 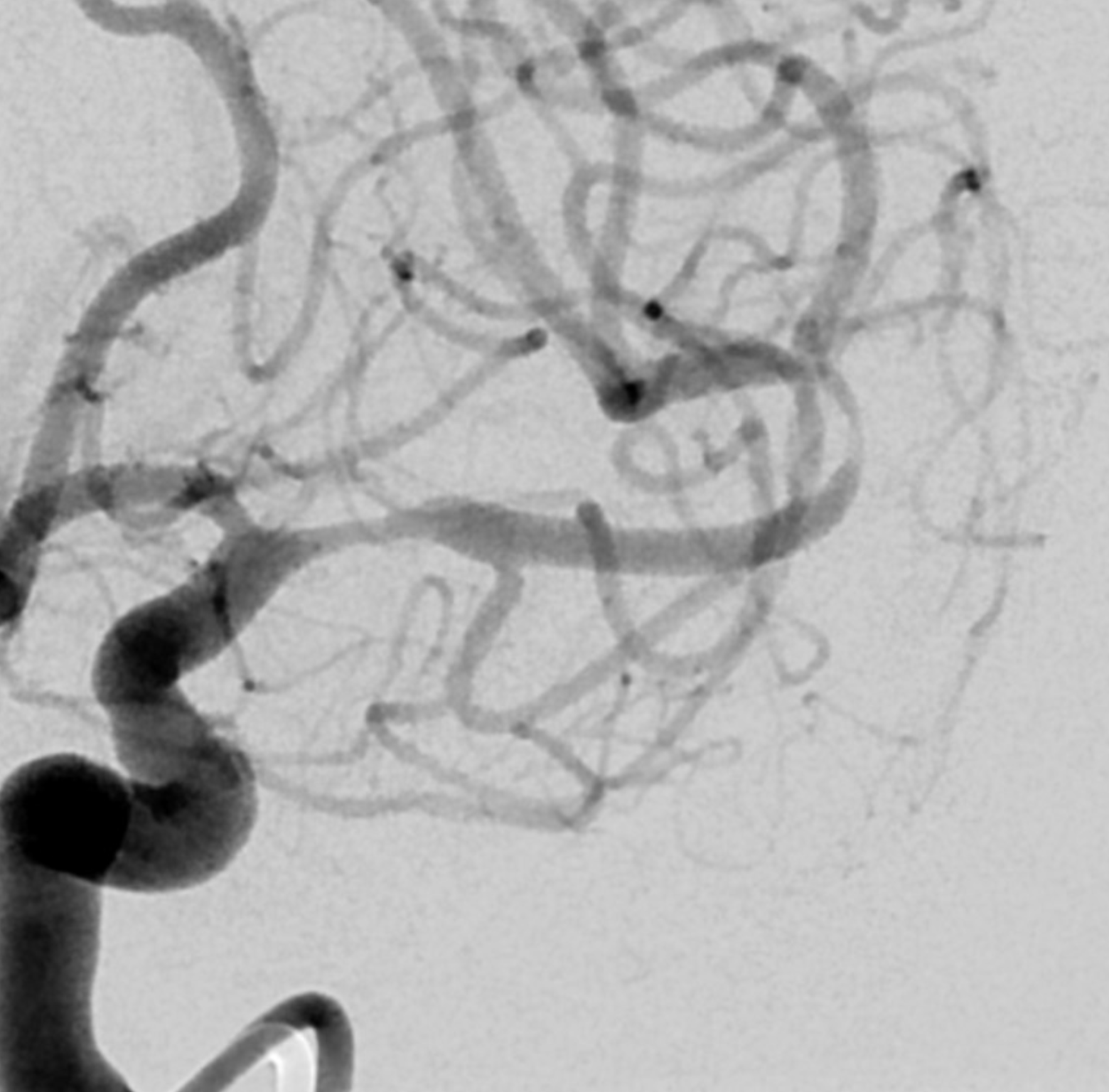 Advanced Cone Beam CT is needed to make the diagnosis.  Having automated reconstructions is not enough. The image below adds nothing 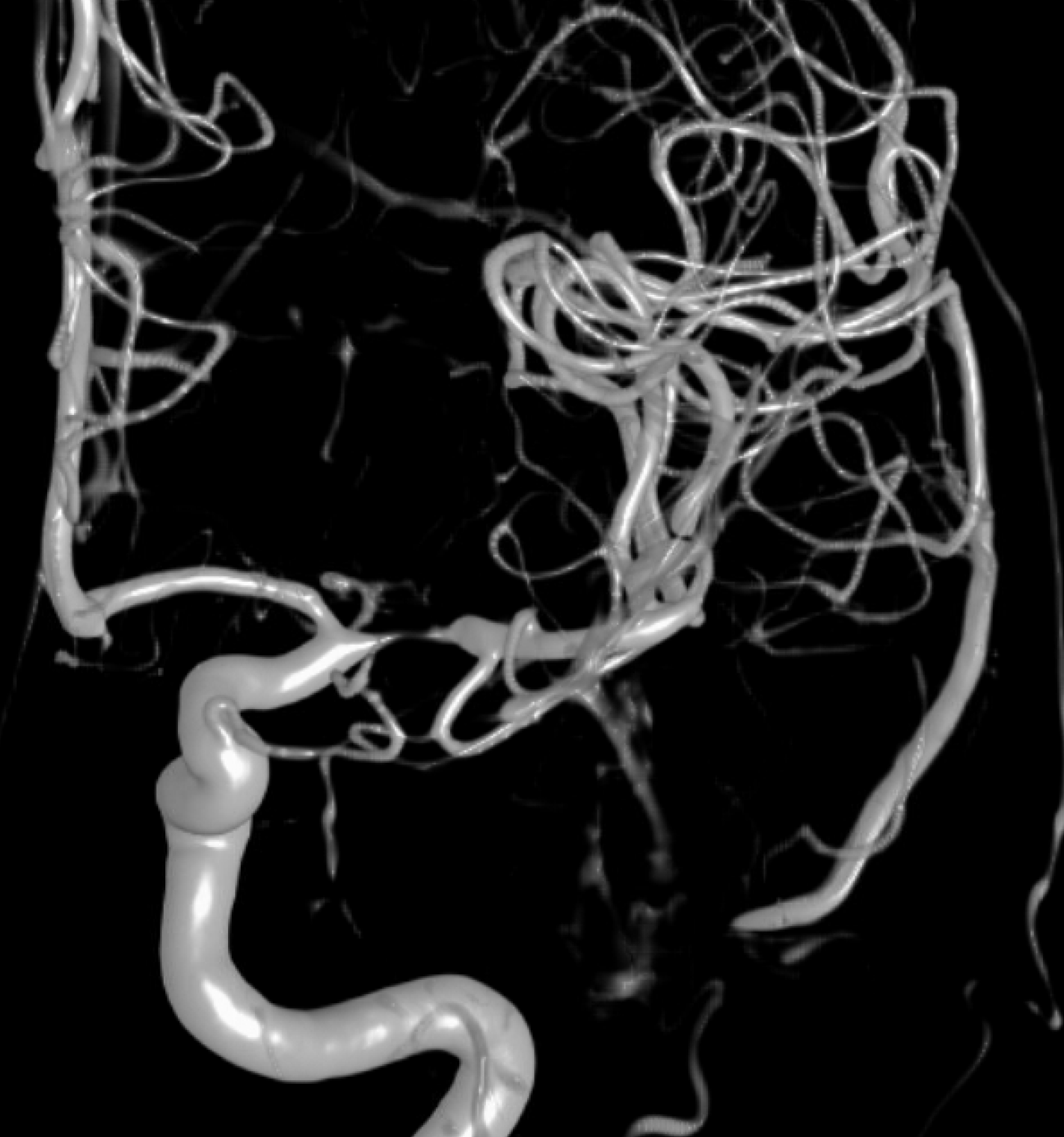 Even higher magnification reconstruction is not helpful 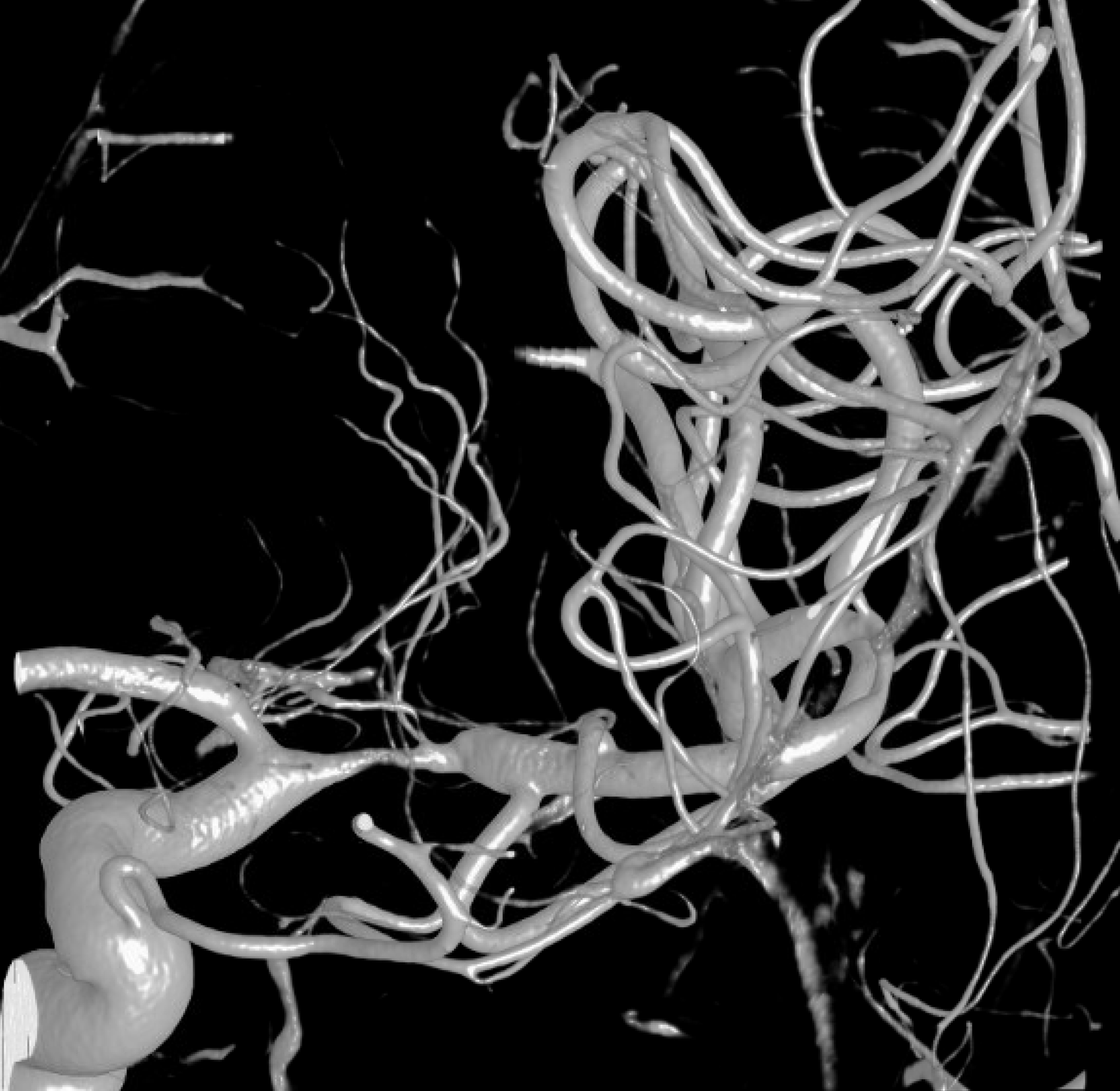 An even higher one? Still nothing to hang hat on 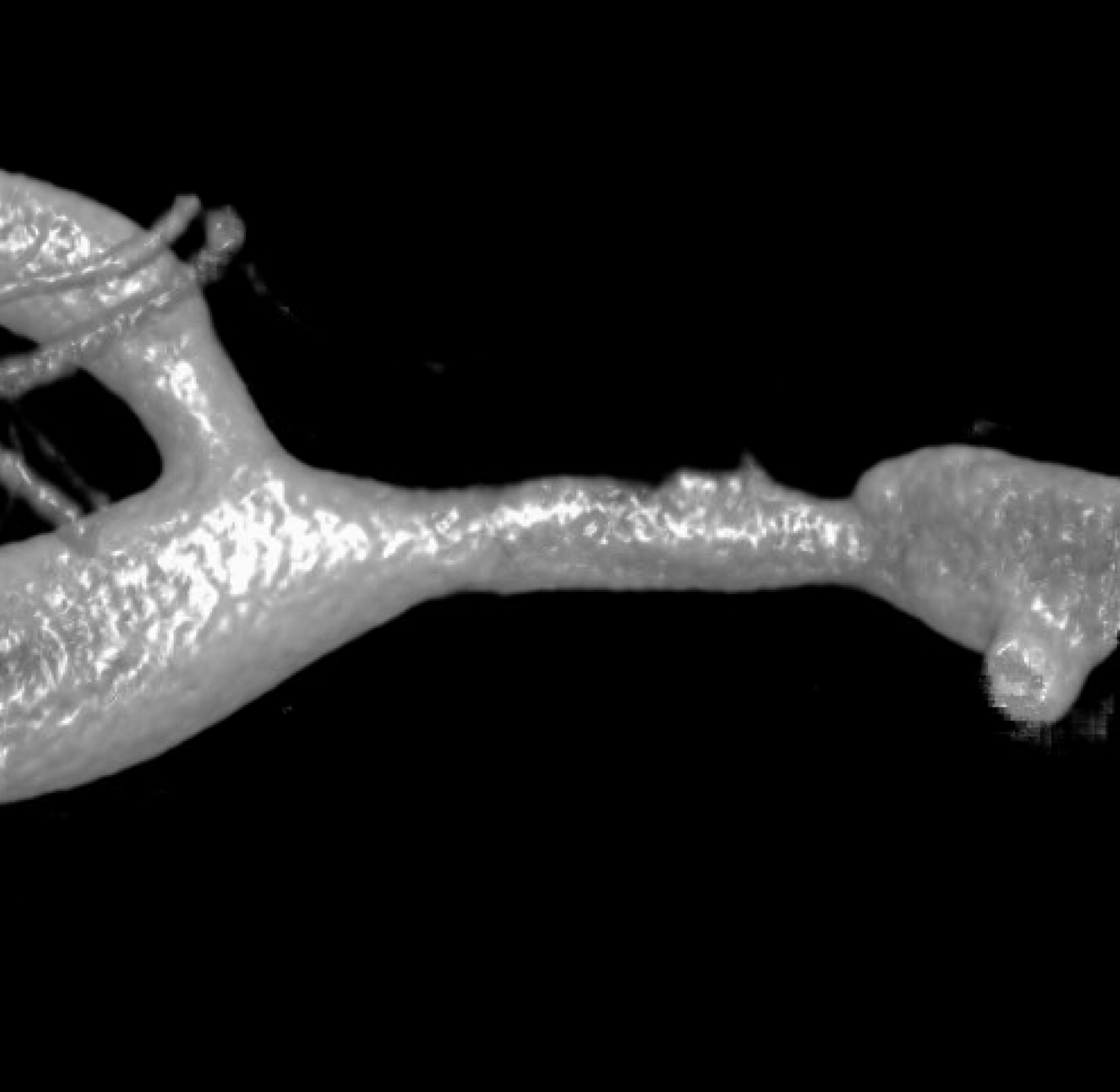 We have to look even closer — this is the front (AP) view.  Look from the back now — see it?  The dissection is hiding behind the wall 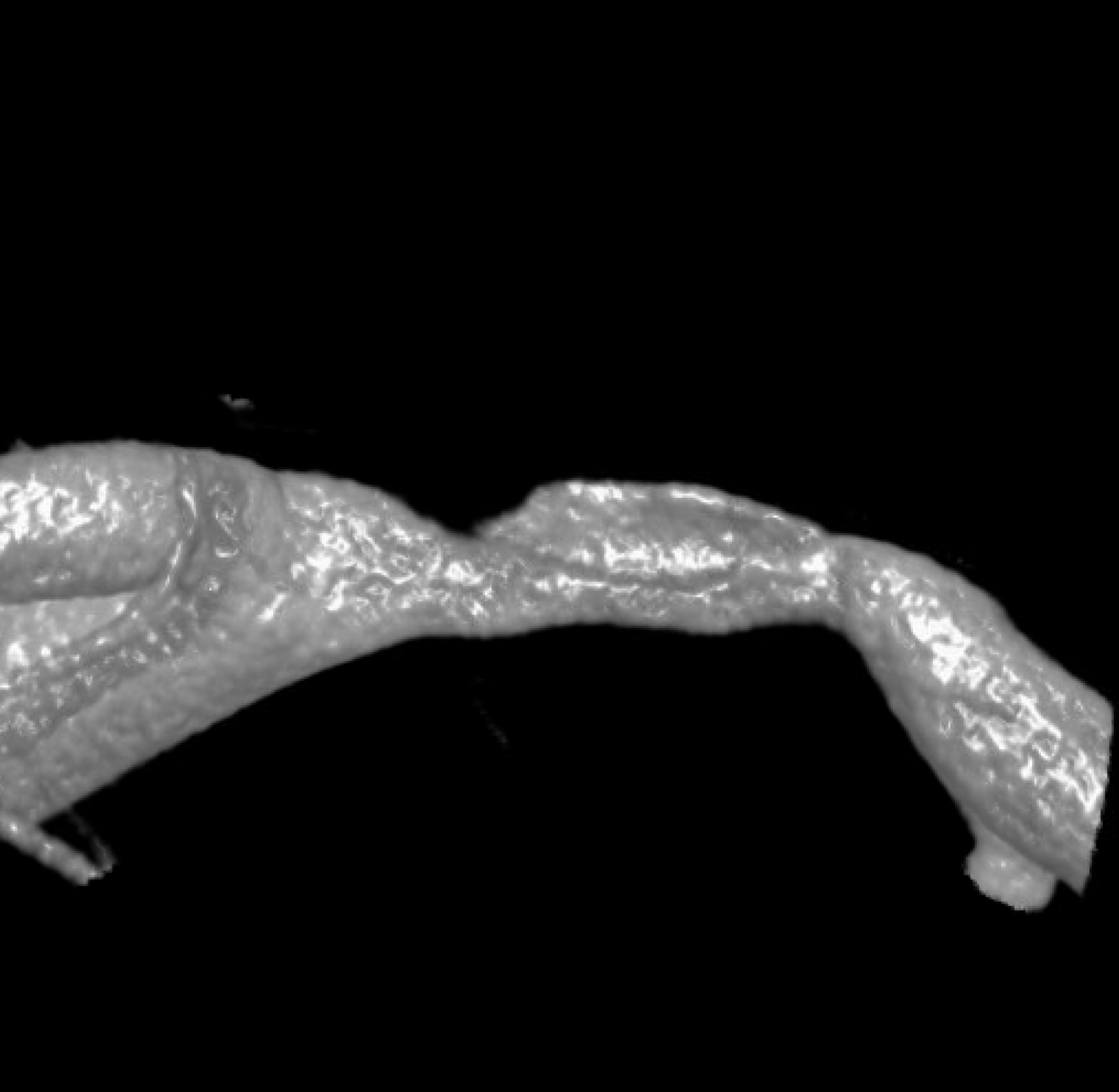 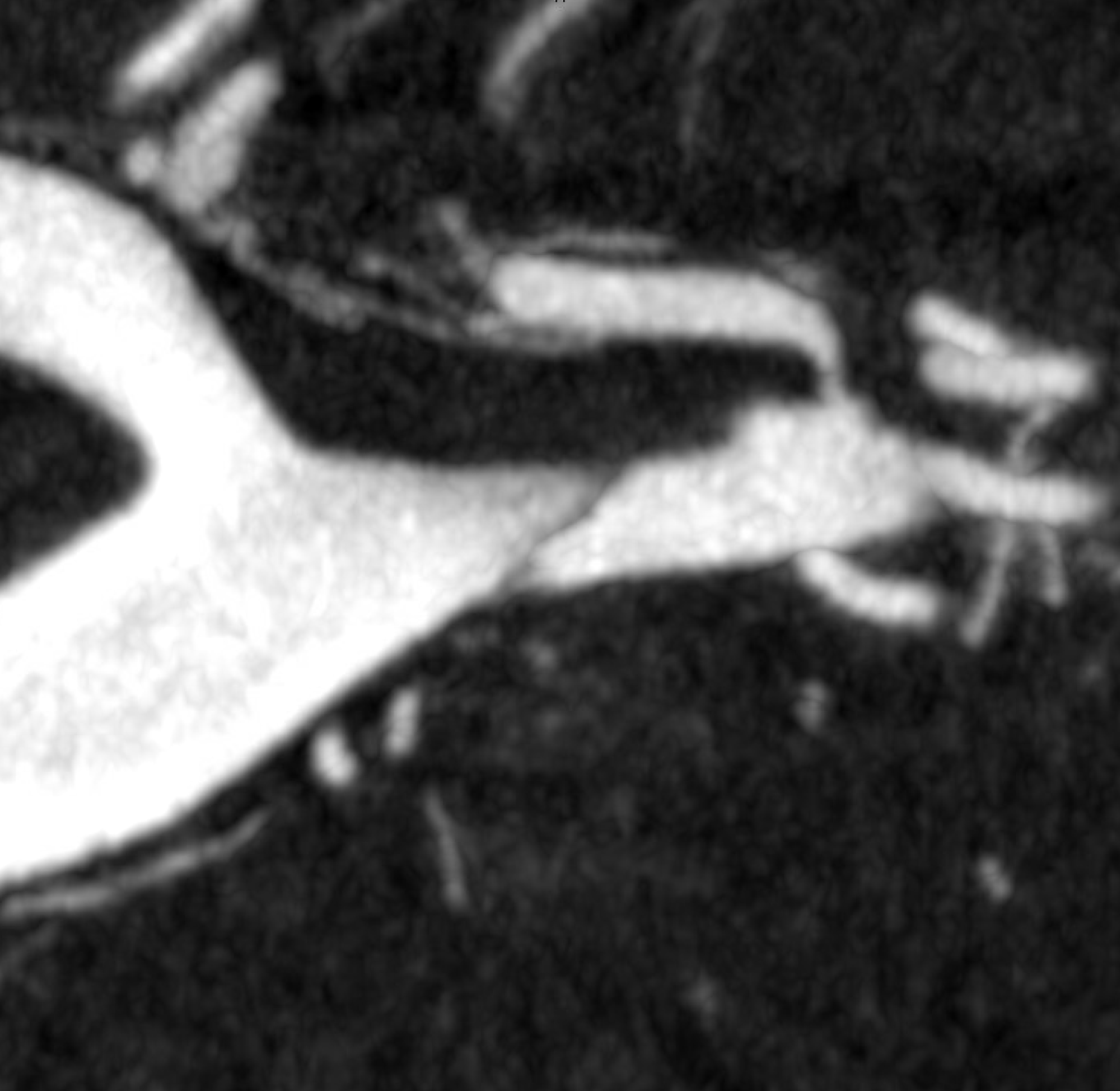 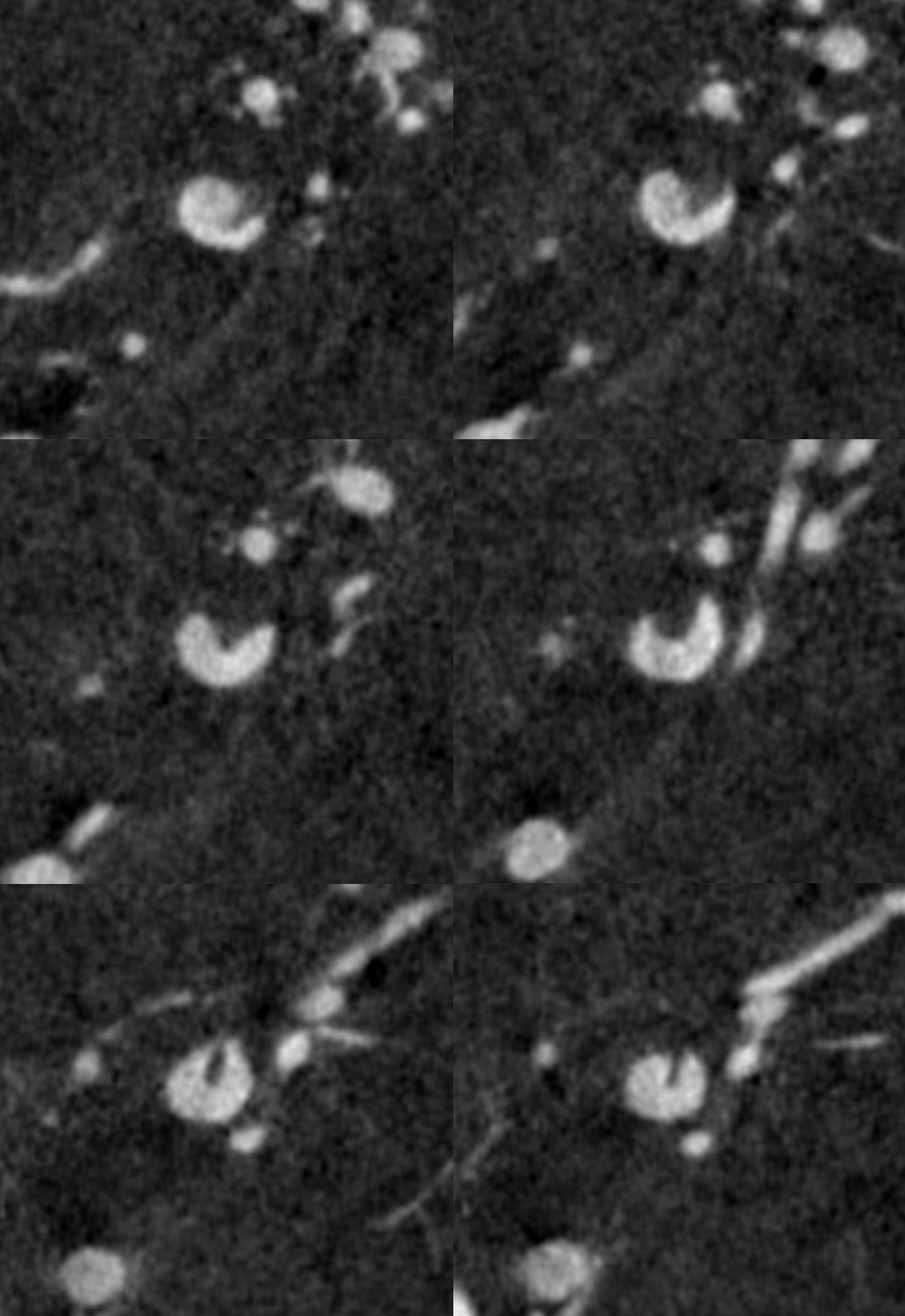 This is not easy.  Meticulous technique is necessary, including general anesthesia, pharmacologic paralysis, manual reconstructions.

Sometimes, the diagnosis is not clear until the dust settles. This is more common in setting of complete occlusion, because we cant see what’s beyond.  How to tell what the cause is?  Knowing risk factors and clinical status remains key.  Here we suspect dissection from the beginning, but confirmation comes later.

This patient presents with M1 occlusion — another example of nonspecific location 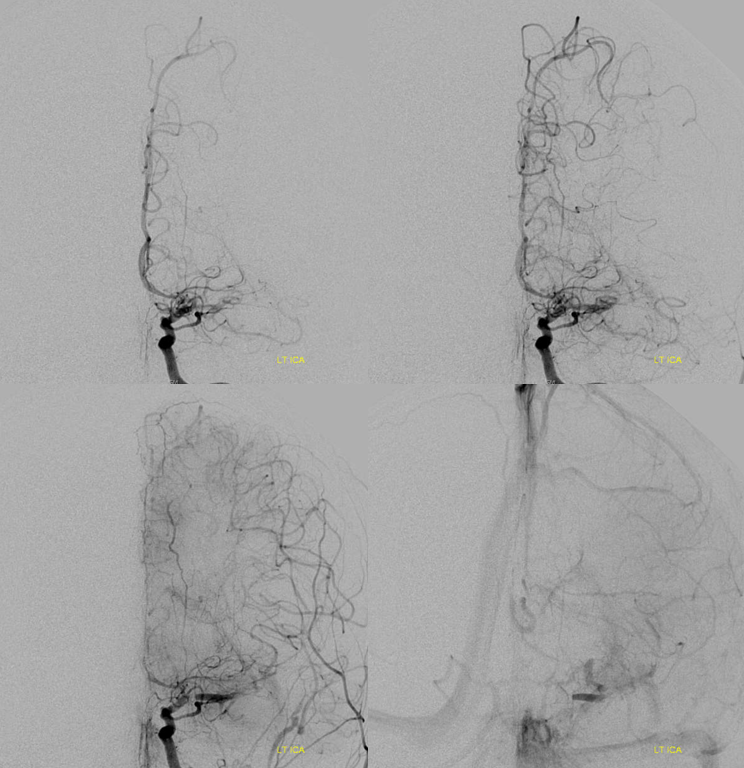 There is a clue above — the lack of contrast in very proximal M1 and then contrast again in mid-M1 segment.

Magnified view shows contrast stasis. This is one of the lumens — which one is impossible to tell for sure.  Probably the false one. 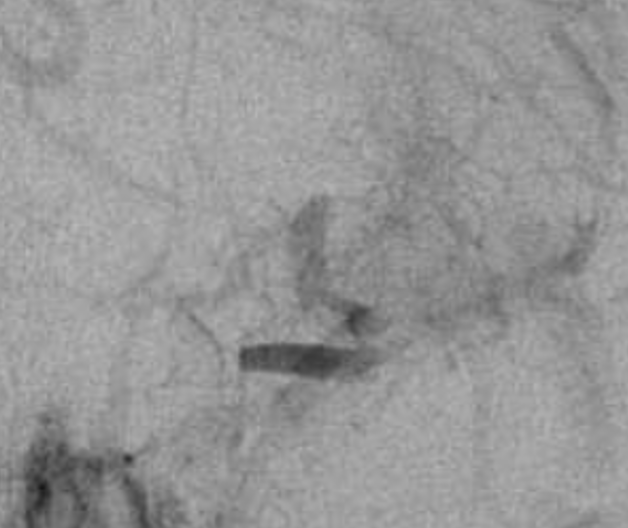 Post aspiration — there a multiple filling defects at the terminus and M1, and the A1 looks abnormal — another commonly seen issue, as dissection tends to extend into the A1 as well. None of this looks like a definite diagnosis though 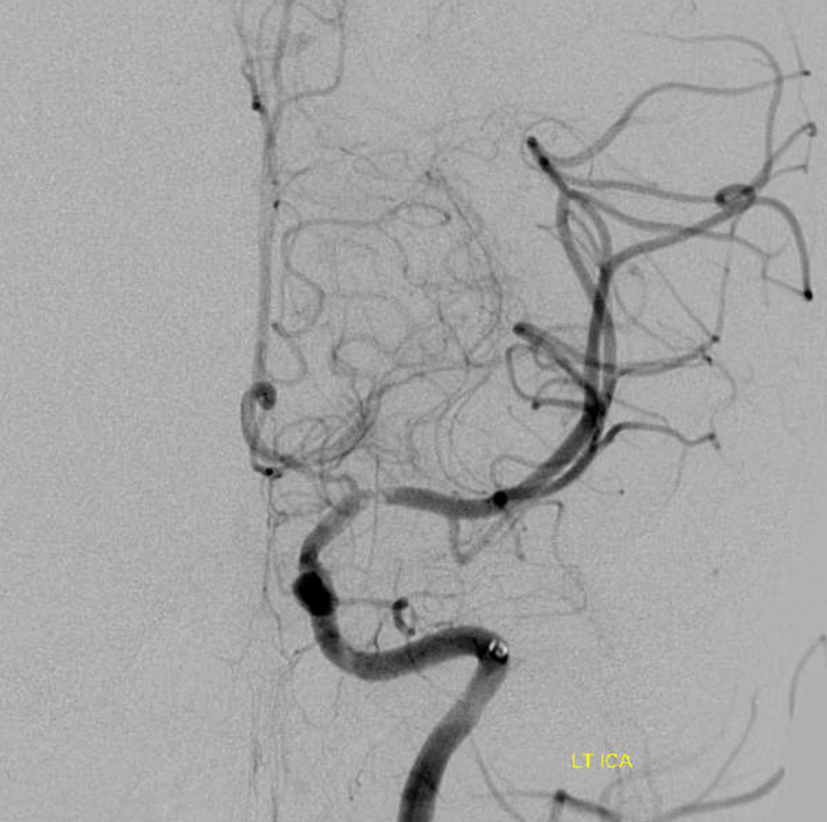 Another clue is rapid change in morphology.  Emboli don’t do that.  Athero does.  And so does dissection. This is a few minutes later.  There is continued inflow into false lumen, narrowing and twisting the true one 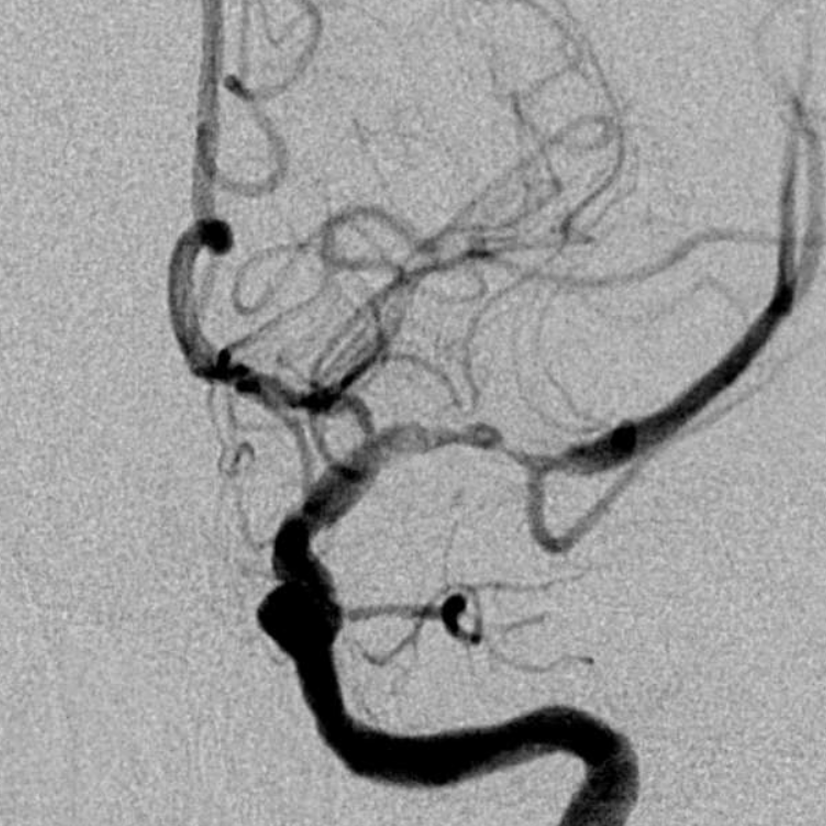 After IV integrilin and waiting — no mechanical intervention.  That the look 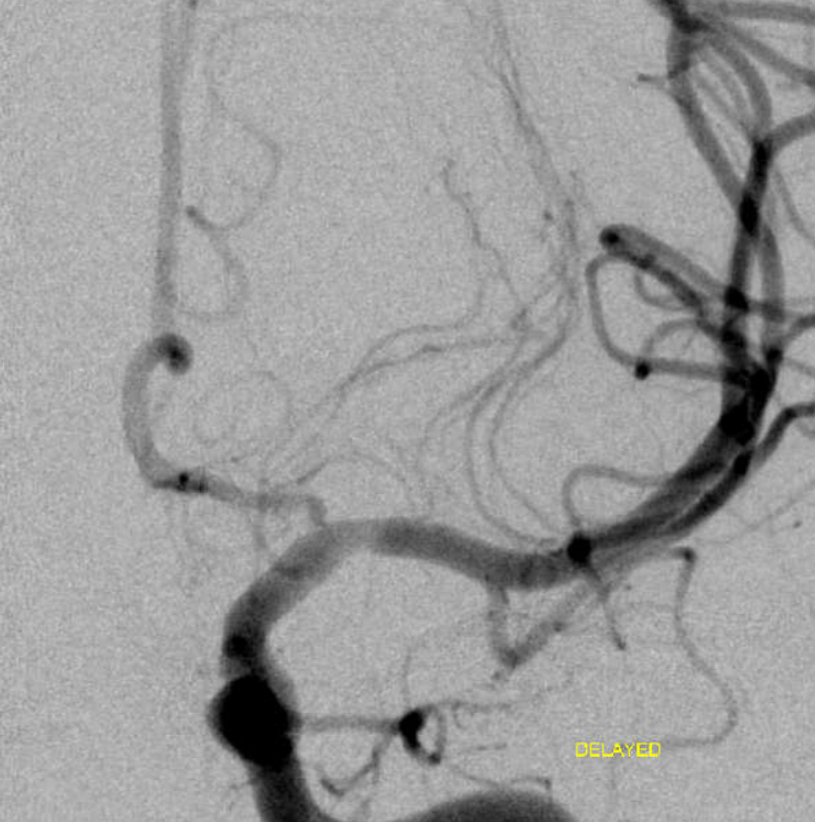 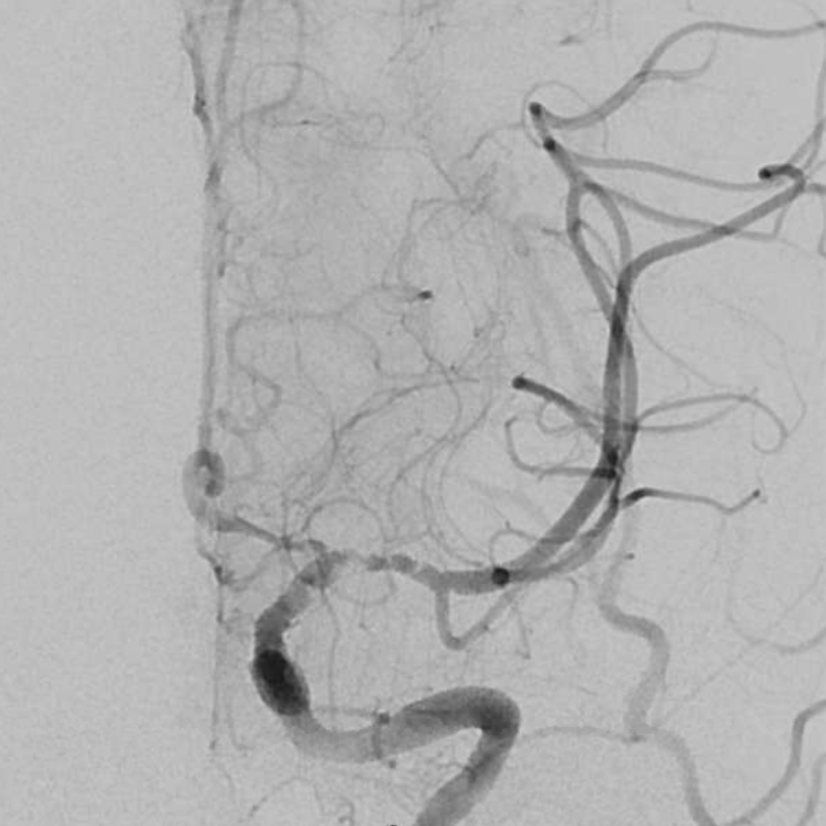 IA integrilin improves it. The telltale A1 narrowing remains. 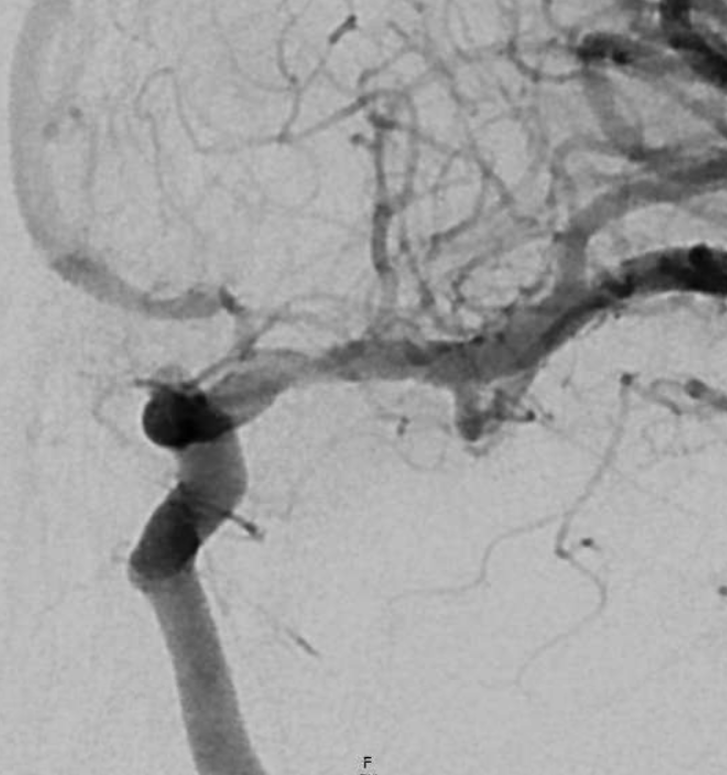 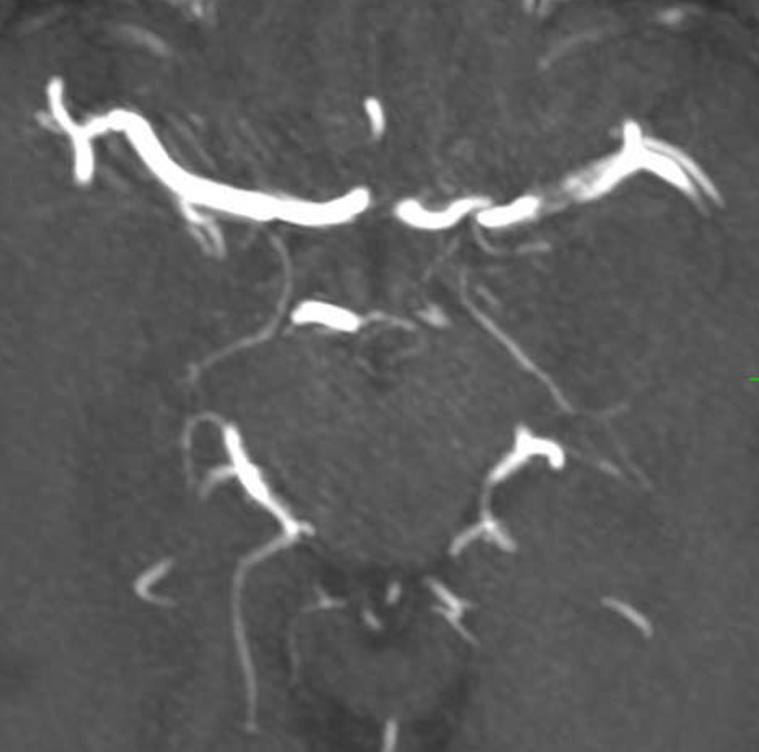 Fast forward a few months.  CTA confirms the diagnosis. Two lumens are now clearly visible, and both are open.  The proximal MCA is narrow. 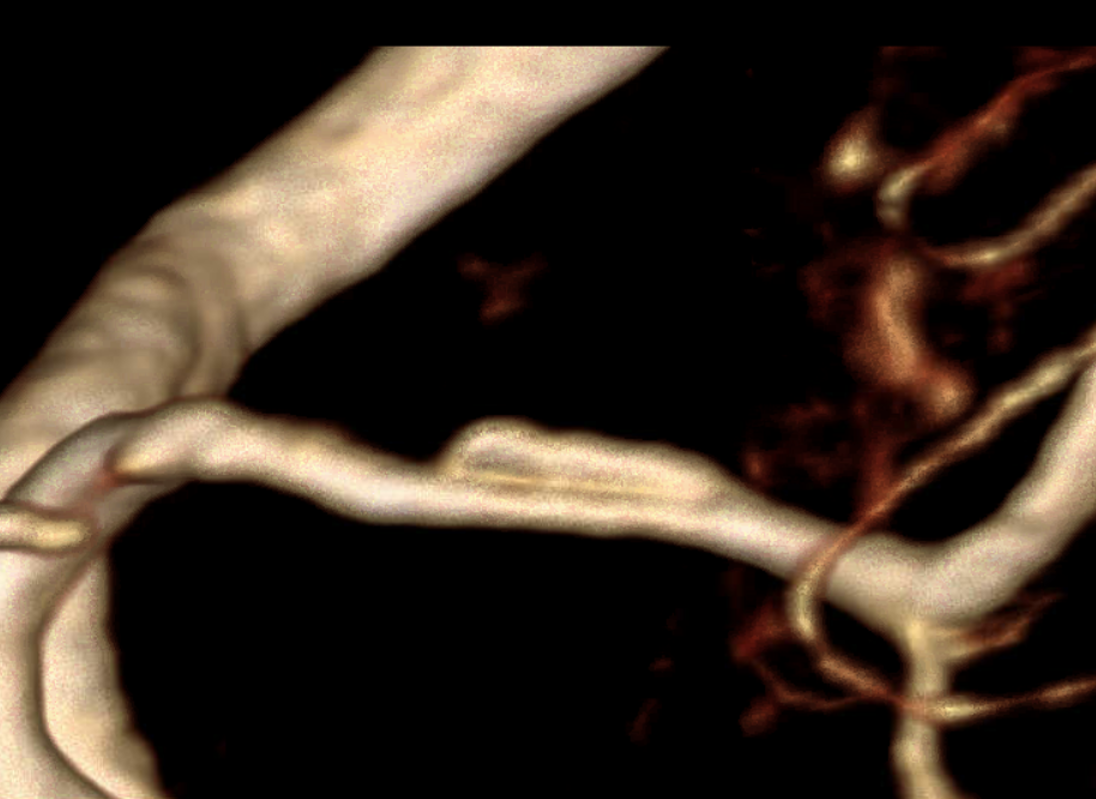 A similar case with a worse outcome.  Published in our JNIS paper on MCA anatomy 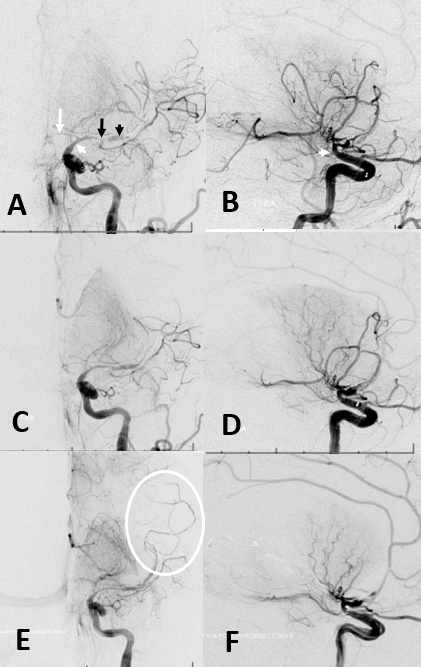 Another sign of a dissection is pseudoaneurysm. Of course, most saccular aneurysms are not we believe related to any dissection, and probably not all fusiform aneurysms are dissenting either.  So this is often neither here nor there.  But sometimes there are other signs — like aneurysm and two lumens — much more helpful.

This patient presented with headache and minimal neurologic symptoms, secondary to infarct being in the right inferior division 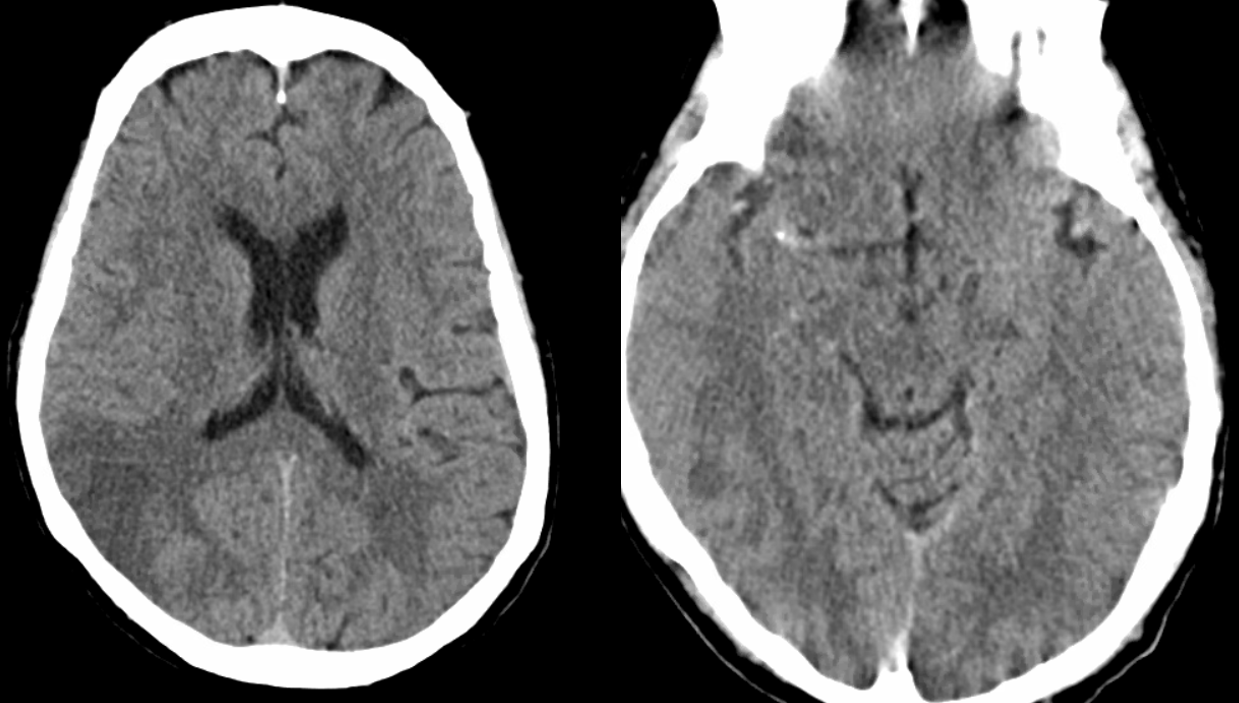 CTA shows a peculiar dilated irregular look to the M1 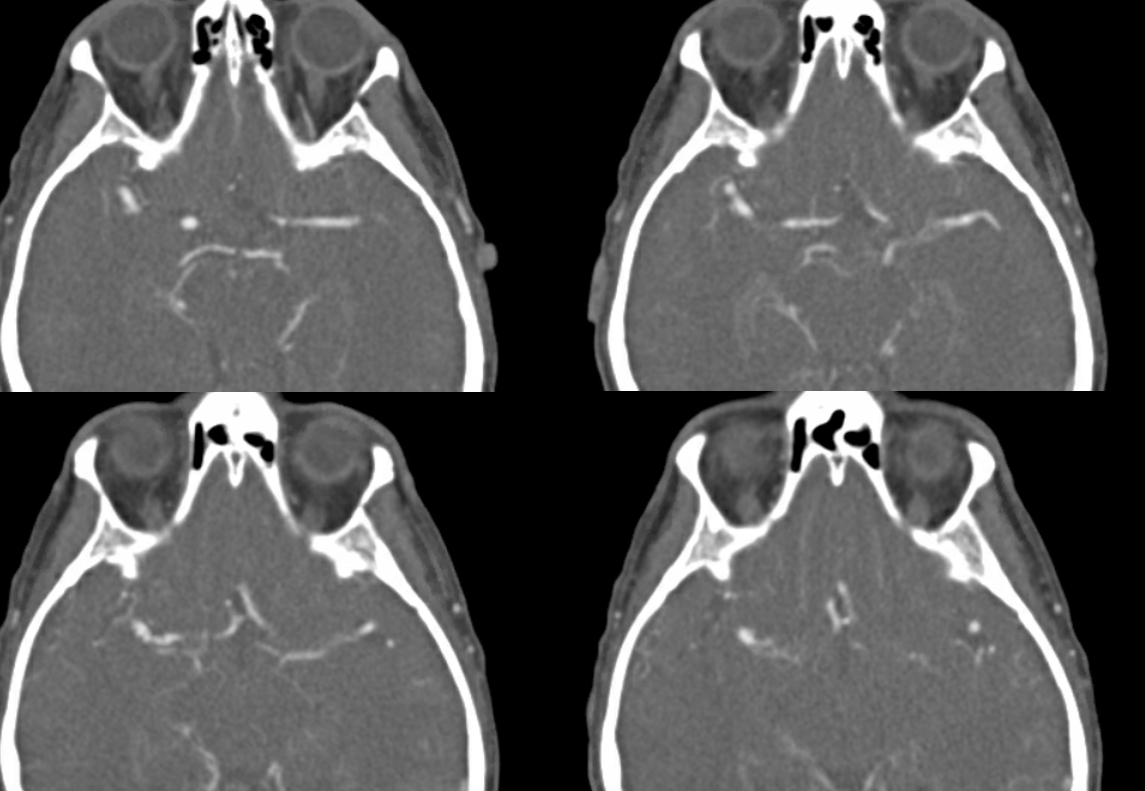 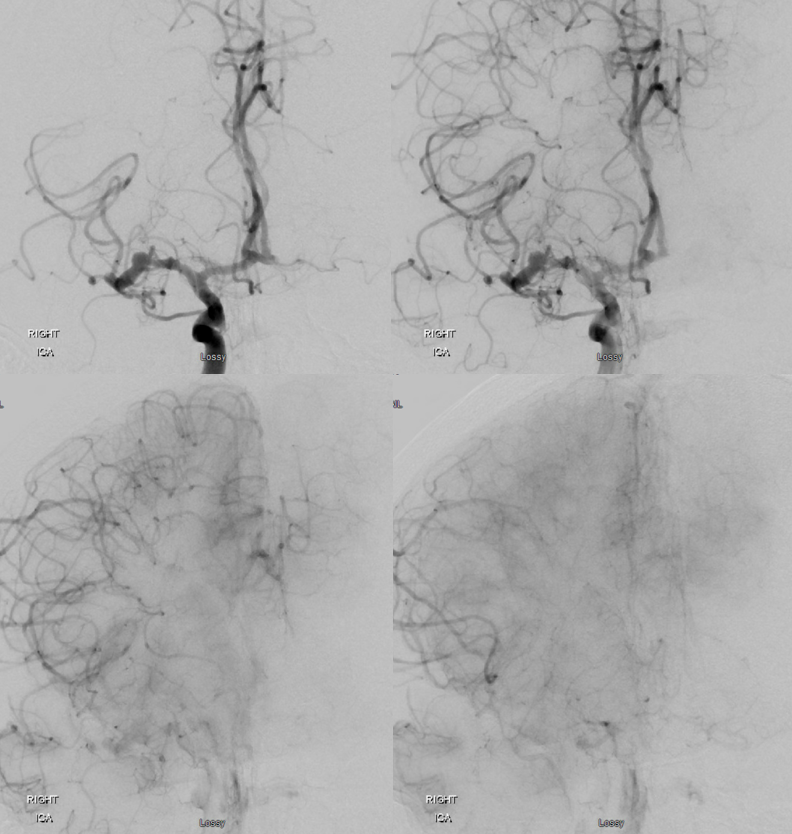 Optimal projection, magnification, minimal movement show morphology — there is proximal narrowing of M1 and associated double lumen.  This is as diagnostic of dissection as its going to get.  Which lumen is true and which is false is often hard to say. Certainly size doesn’t matter.  If anything, in acute large dissections the bigger lumen is more often the false one, since the true one is being compressed. 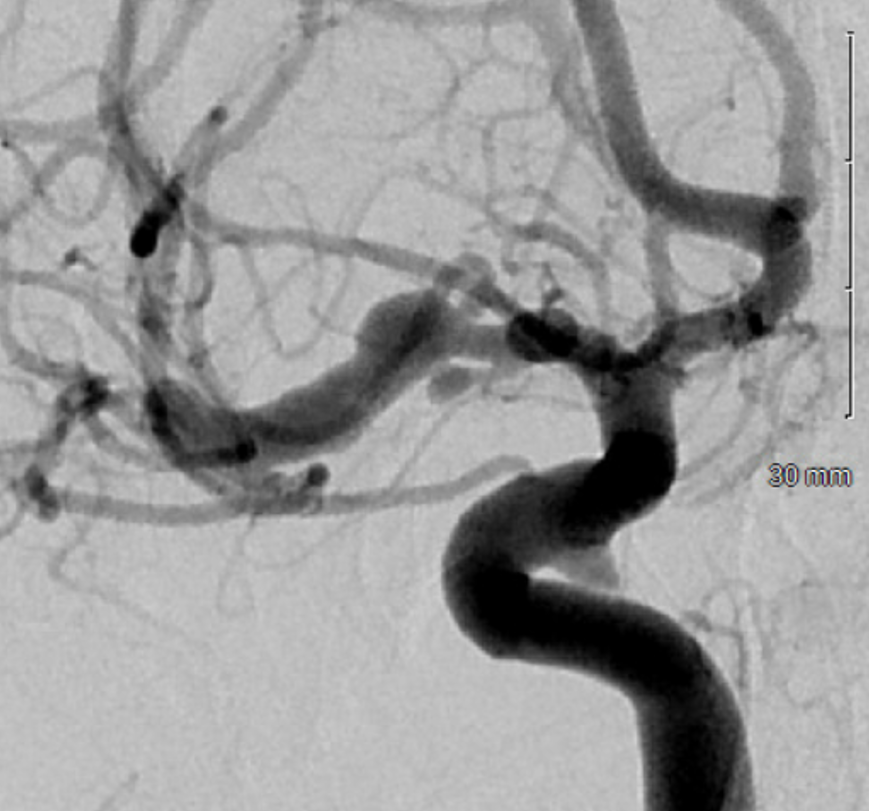 This kind of “rete” appearance makes for challenging diagnosis. There is relatively broad agreement that vasa vasorum play a role in reconstitution of larger vessels such as cervical carotid. However in the brain they can be described as congenital, variation of development, etc. Jury is still out. In our house this is a dissection response.

Conclusions: There are many more cases to show. These highlight some of the advances in imaging and helpful signs. The diagnosis remains extremely challenging. In most cases it cannot be made with certainty by cross-sectional imaging. MRI vessel wall holds most promise but is not easy when vessels are small and timing of blood products is uncertain. Angiography is the best method so far, but requires meticulous technique, general anesthesia, etc. Treatment is likewise challenging. It is easy to make these worse. Knowing which lumen one is in can be impossible and being in the wrong one is very bad. Having a high suspicion index and access to advanced imaging are probably the best ways to make the diagnosis.