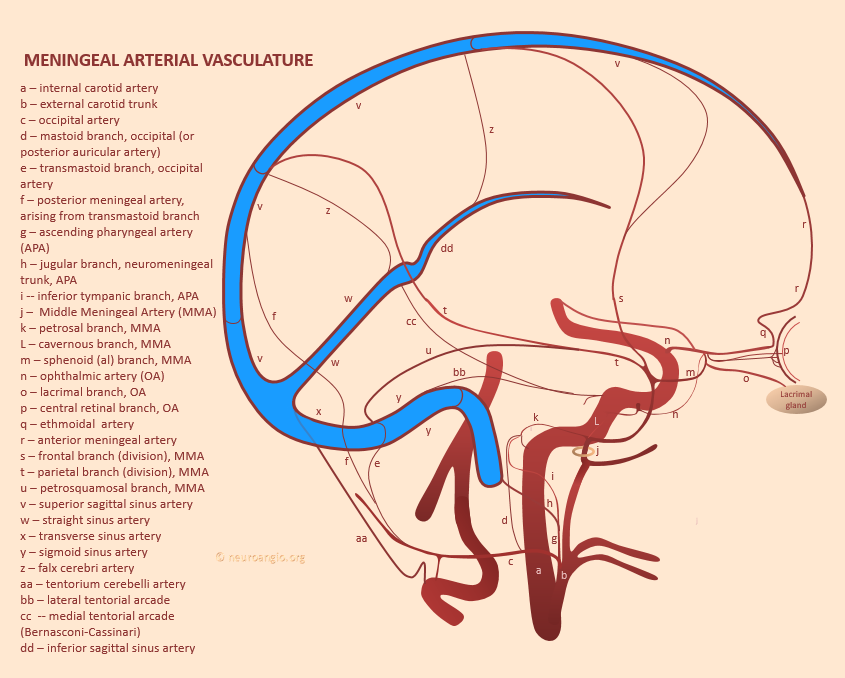 This is an “umbrella page” for meningeal arterial and venous vascular networks.  The point is that there is more to the meninges than the Middle Meningeal Artery.  The meninges are a highly collateralized vascular network, a critical factor in successful treatment of diseases that involve meninges, such as dural fistulas or subdural hematomas.  For specific information on individual vessels contributing to the network, see Ophthalmic, Middle Meningeal, and Posterior Meningeal Pages.

As you see in figure above, it is best to think of meningeal arteries as a network.  There is tremendous collateral potential between anterior, middle, posterior meningeal arteries, as well as MHT and PCA for example that often contribute to dural vascularization.  Particuarly important are arteries in the walls of dural sinuses, which are the principal connecting anastomotic routes between meningeal arteries and which play key roles in anatomy of dural fistulas for example.  Despite their importance they have no consistent names.  Here and elsewhere on neuroangio.org we name them according to location such as “superior sagittal sinus artery” or “sigmoid sinus artery”.

Anterior Meningeal Artery (r)– branch of the ethmoid arteries (q), which are in turm branches of the ophthalmic (n).  Like any branch, variably well- or under-developed. Runs in the wall of the distal superior sagittal sinus — in fact it is the only named artery that travels in the sinus wall.  Usually does not extend beyond anterior frontal convexity, except when middle meningeal arteries are compromised (surgically most often).  Contiguous with the “Superior Sagittal Sinus” artery (v)  — the anastomotic channel running along the entire SSS. 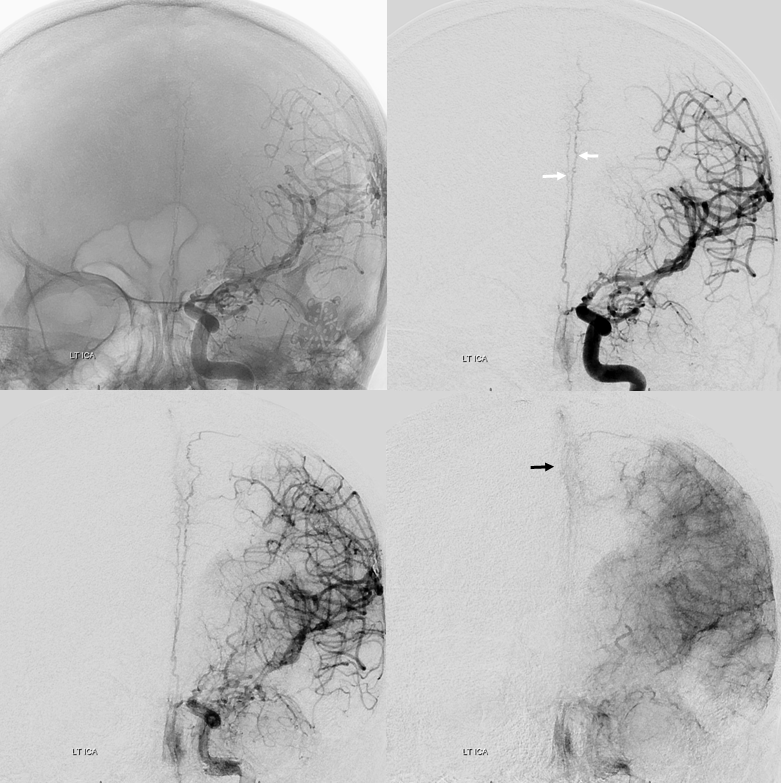 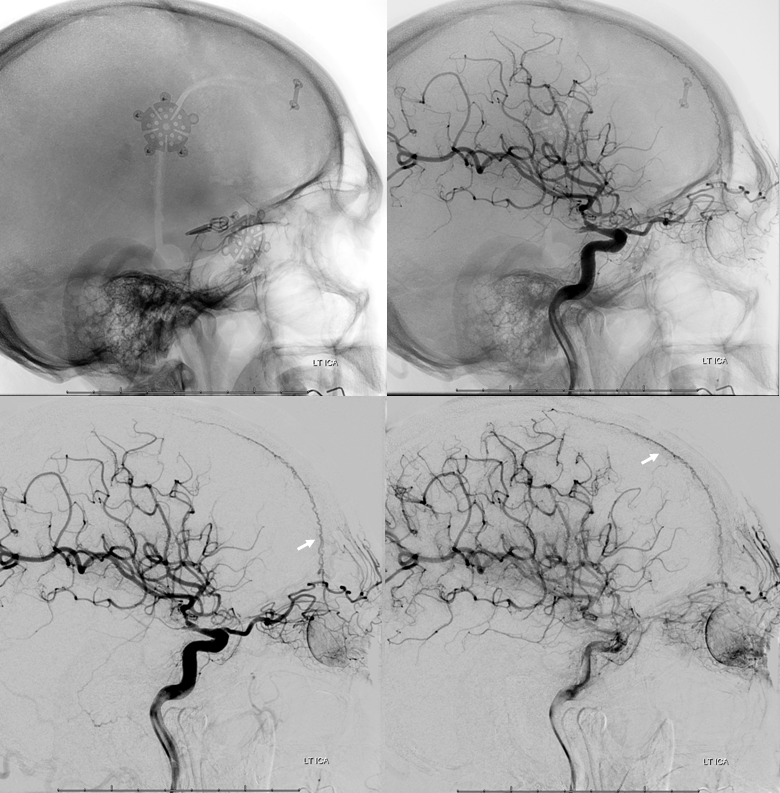 Does not have to be in setting of craniotomy either.  Again, there is a balance here — sometimes anterior meningeal is large, while convexity MMA supply is smaller.  Here is an example — note how the anterior meningeal splits into two as the SSS becomes larger 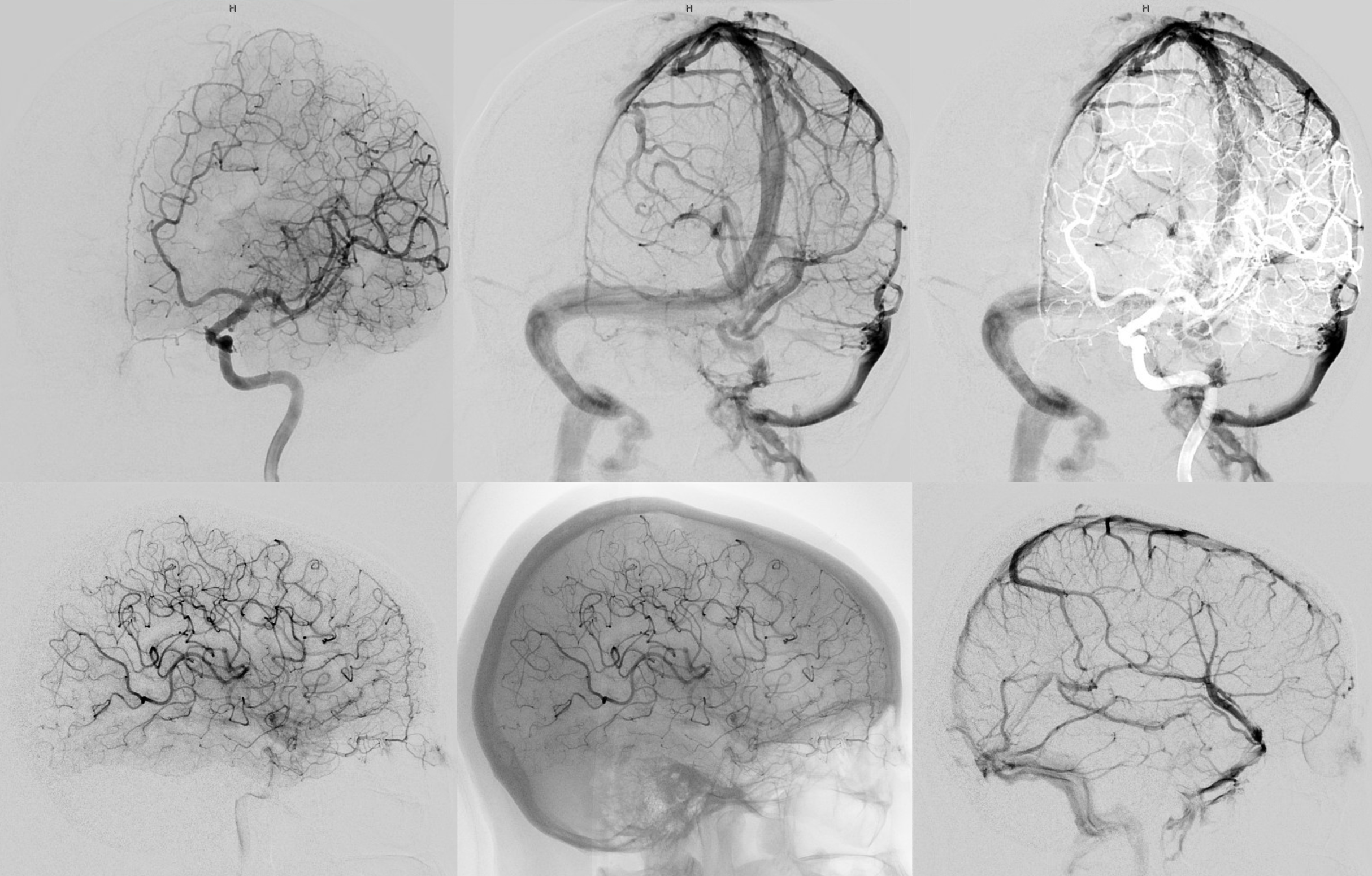 On the back end, look at meningeal vessels in wall of the proximal superior sagittal sinus in patient with a torcular fistula.  Notice two vessels in parallel on each side of sinus — and a wider separation between them compared with the above image, since the sinus is larger posteriorly 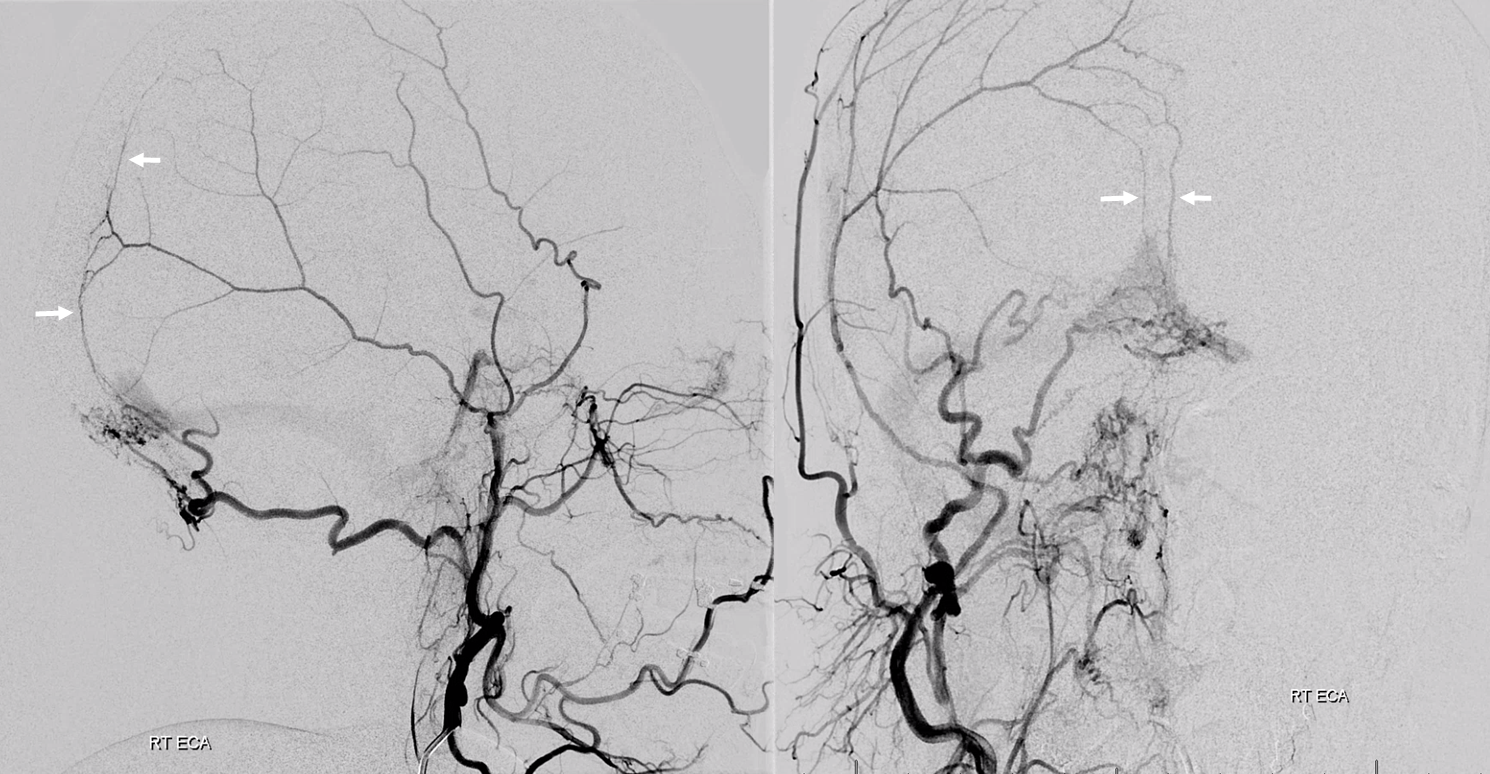 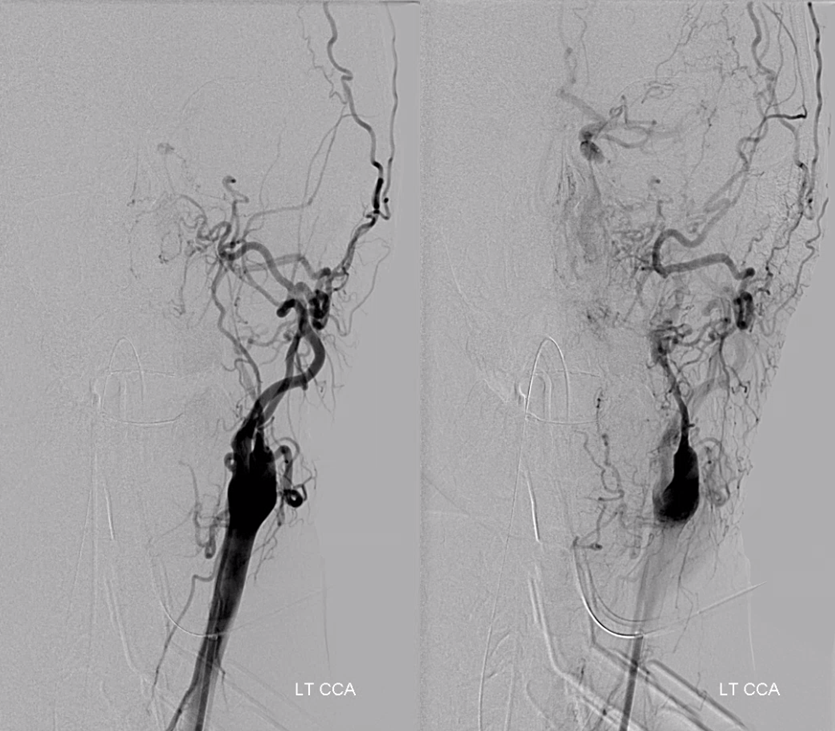 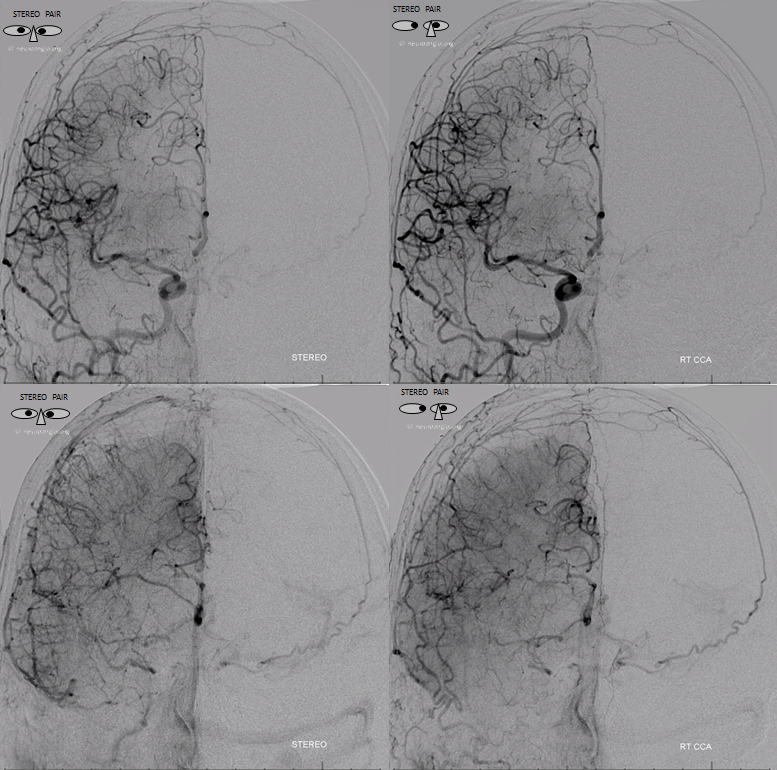 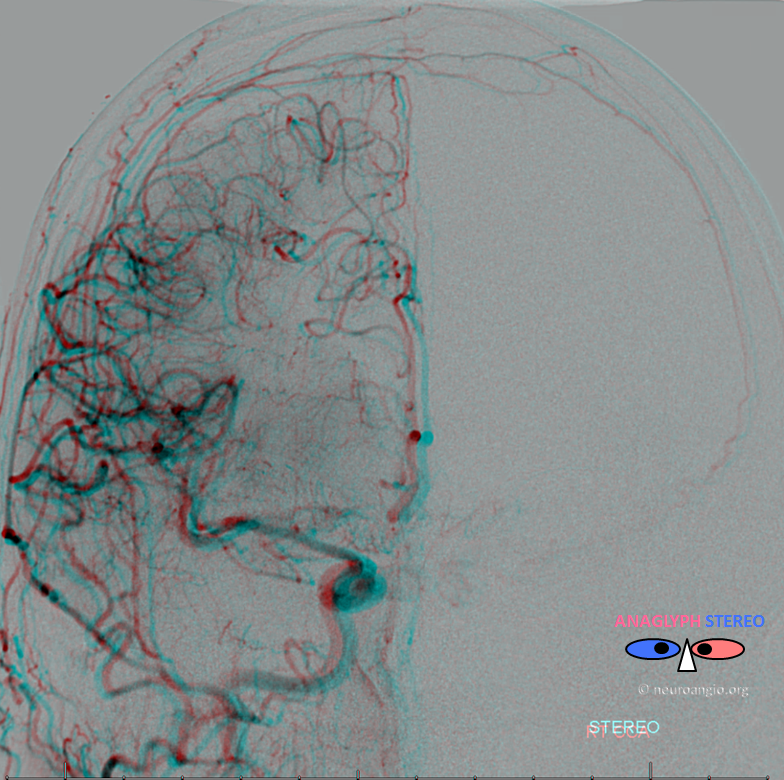 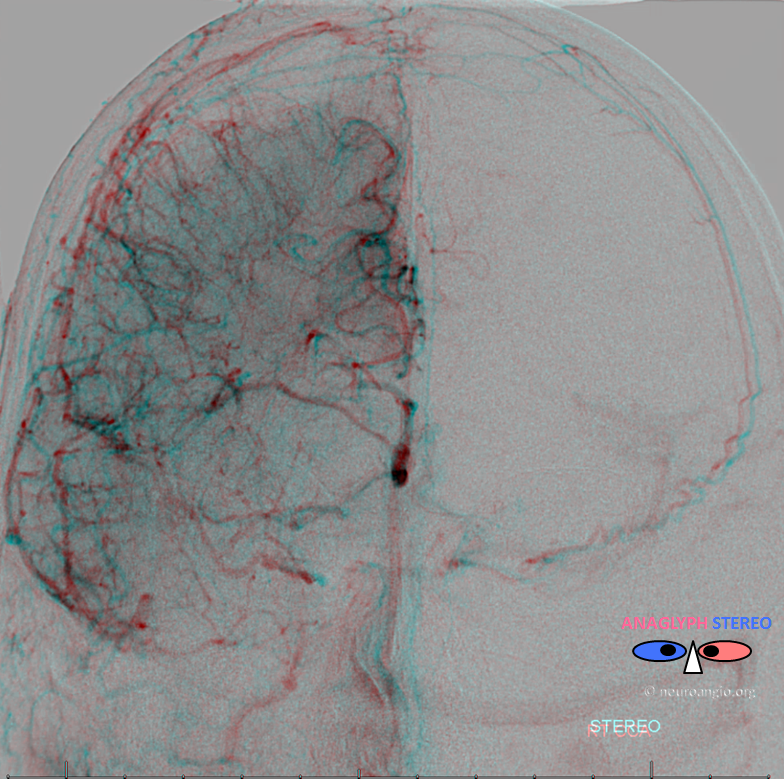 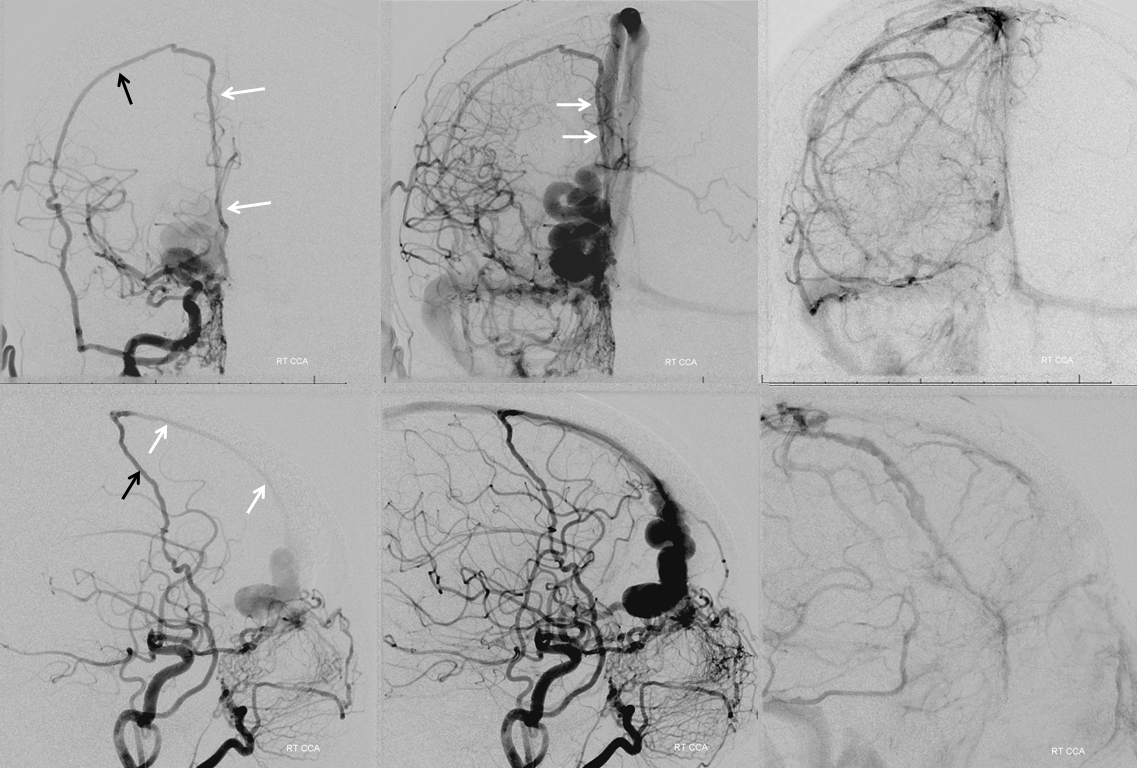 The intrinsic vascularity of the dura has been under-appreciated, despite frequent visualization of consistently present arterial channels other than named anterior, middle, and posterior meningeal arteries. There is more awareness of intrinsic vascular arrangement and its importance because of subdural hematomas.  However of chief interest, to neuroangio.org at least, are arterial channels in walls of dural venous sinuses, specifically at points of dural confluence.  Examples of named ones are anterior meningeal artery (in wall of distal/anterior portion of the superior sagittal sinus), the medial tentorial arcade (aka Bernasconi-Cassinari, located in the edge of tentorial leaf), lateral tentorial arcade (extending from MHT to sigmoid sinus along the confluence of dural convexity and tentorium cerebelli).  However, other vessels, which as just as prevalent, located in walls of transvers, sigmoid, straight, and proximal/posterior sagittal sinus, are under-recognized and un-named.  These are frequently seen in any condition that result in more flow, either globally (dural fistulas, meningiomas, etc) or when rearrangements such as pterional craniotomy require collateral reconstitution.  According to figure below, these vessels are here named based on where they are found, such as “superior sagittal sinus artery” or “sigmoid sinus artery”.  There is bound to be overlap, just as transverse sinus transitions to sigmoid sinus.  Likewise, the distal or anterior-most portion of the “superior sagittal sinus artery” is the same vessel as Anterior Meningeal Artery.

Examples of dural arteries in walls of sinuses 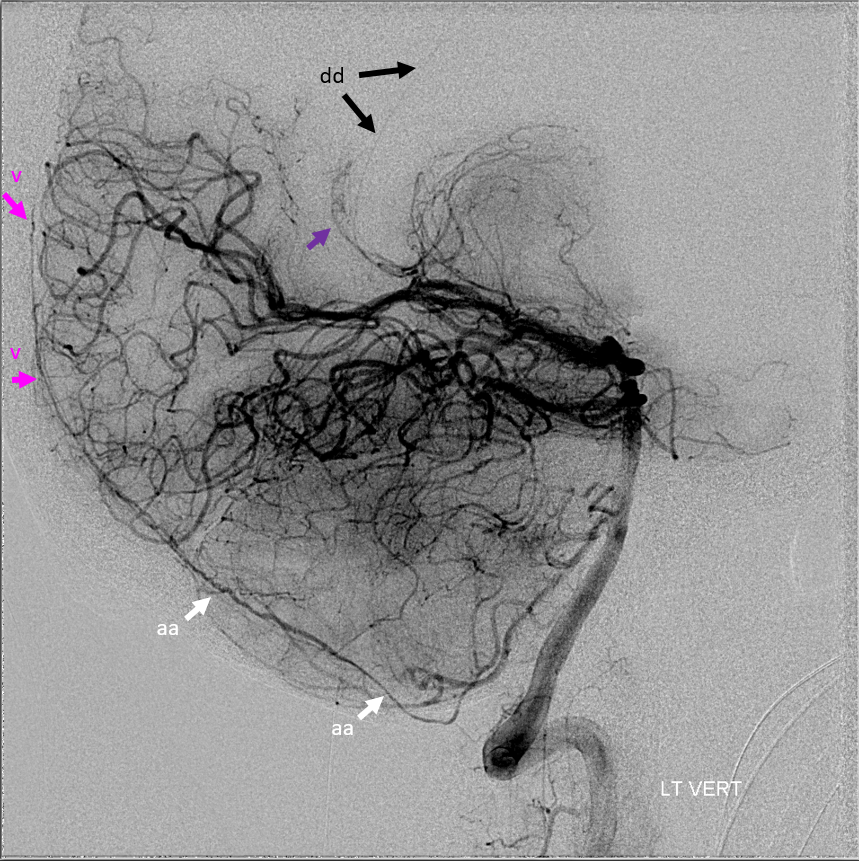 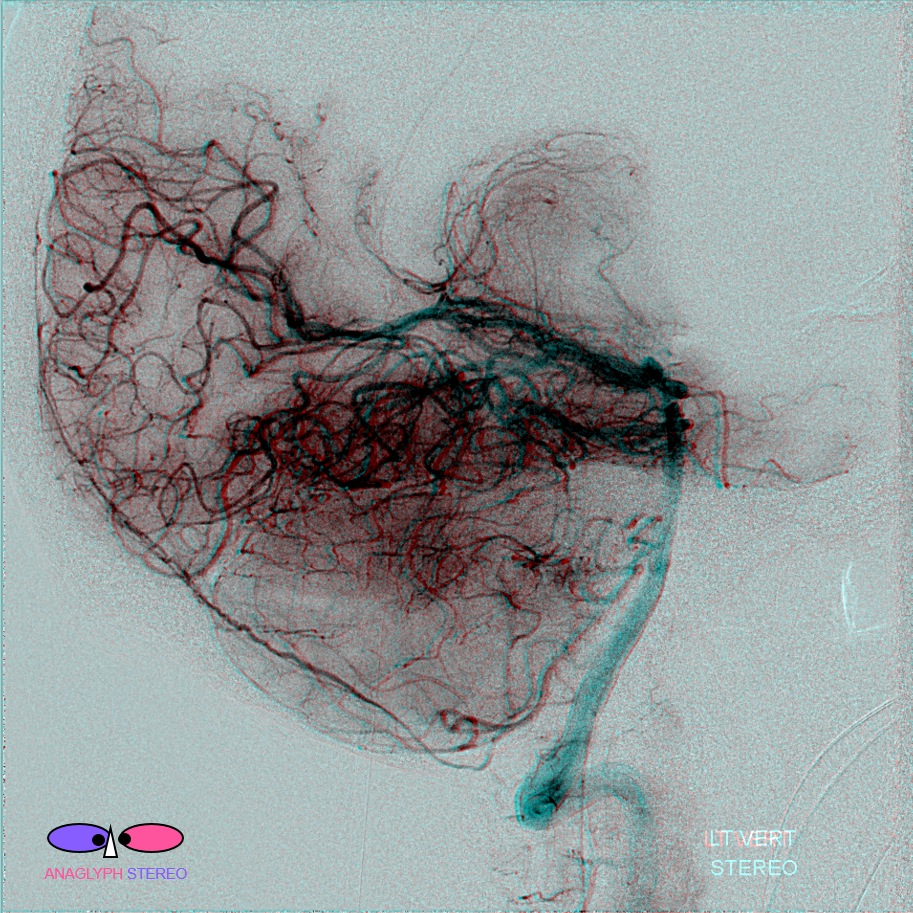 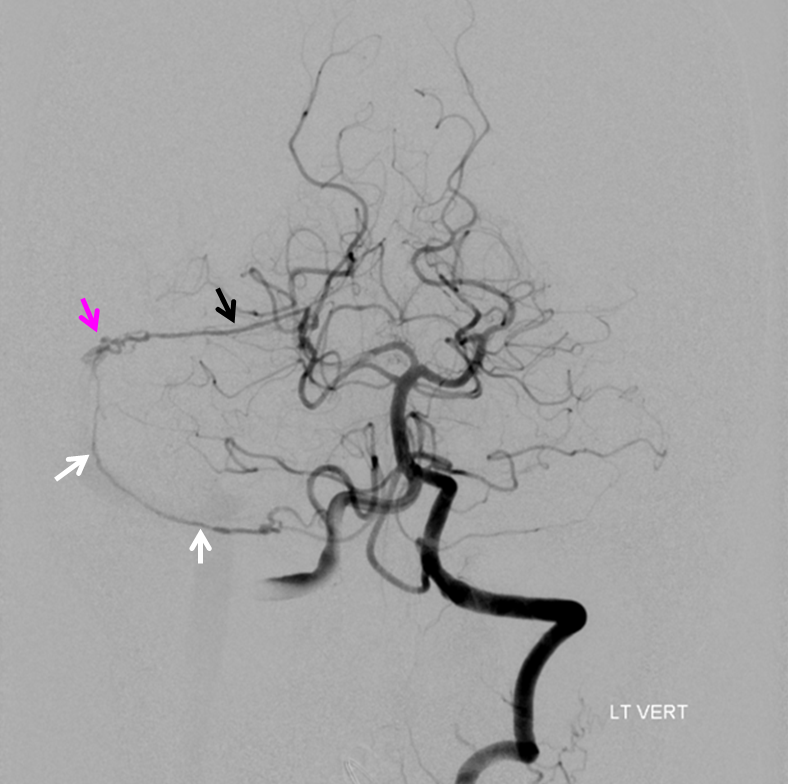 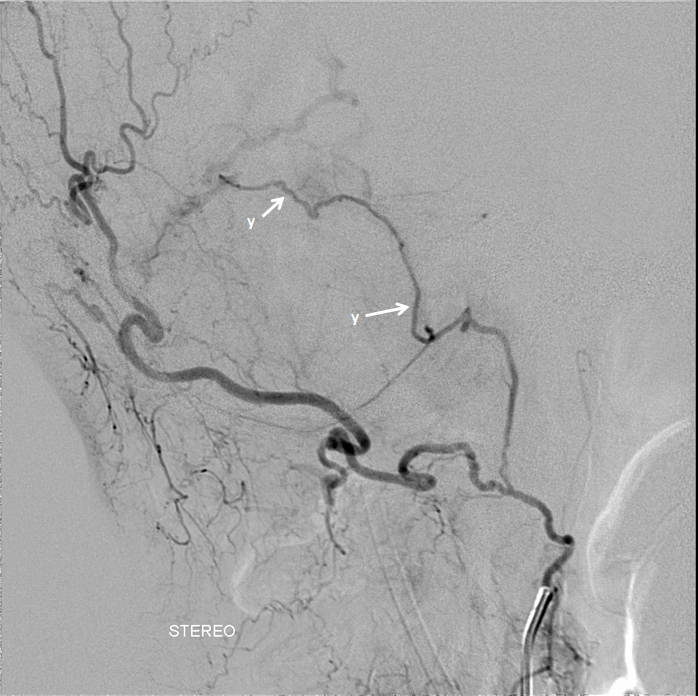 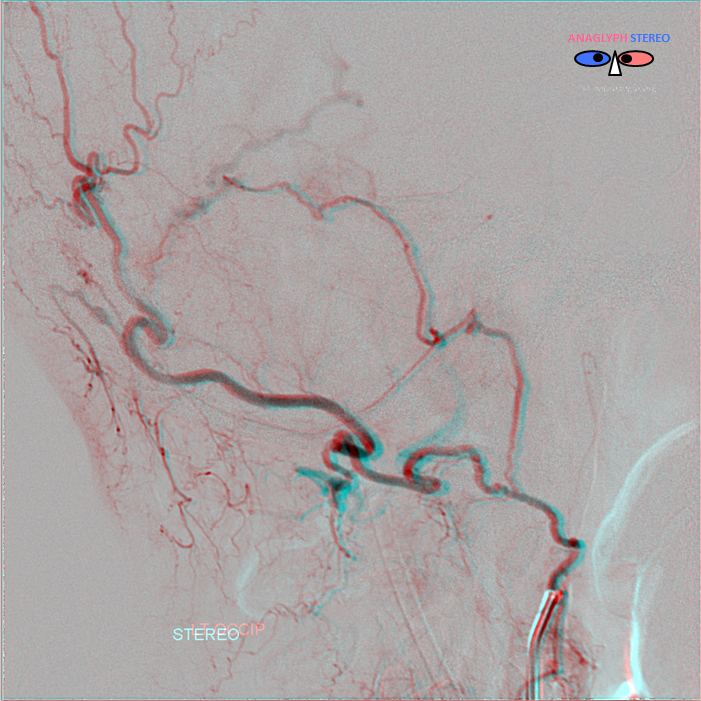 Below is the middle meningeal artery petrosquamosal branch (white, purple) supply to the fistula.  The fistula point (red) is located in a trapped segment of the sigmoid sinus, draining via an ectatic inferior temporal vein (pink) into the Galen (Cognard IV, Borden III) 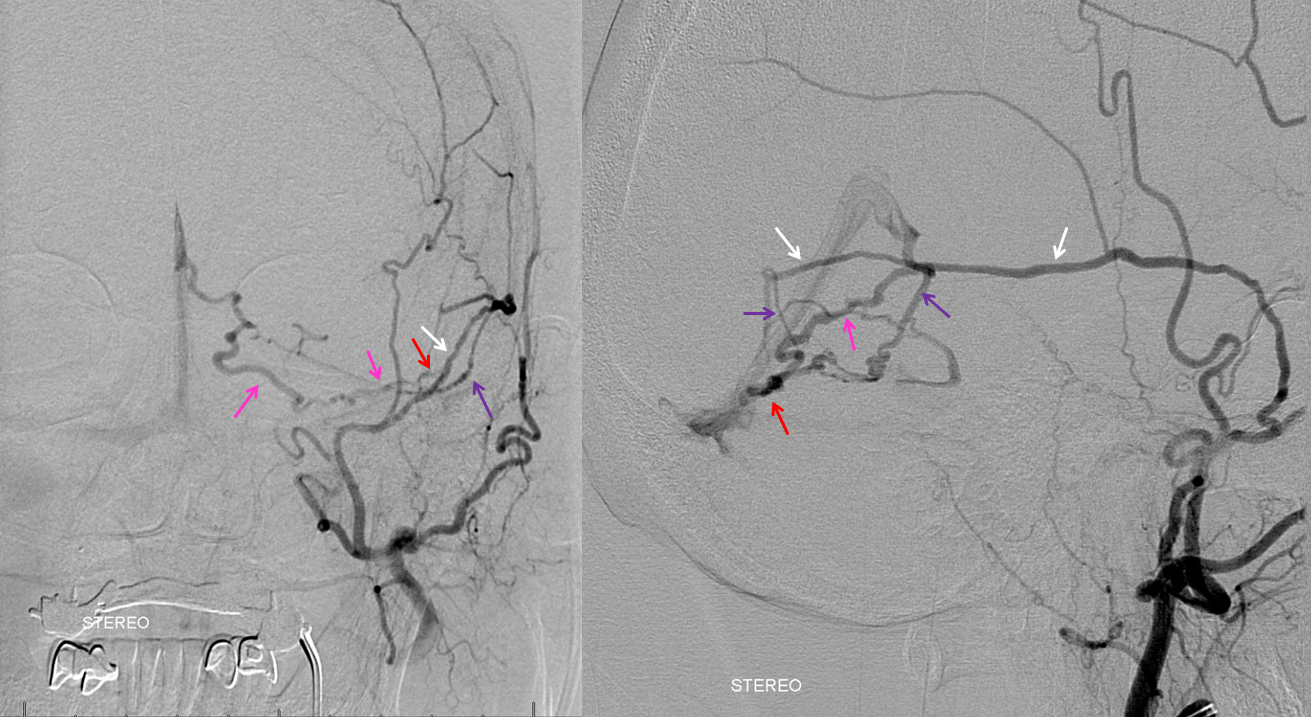 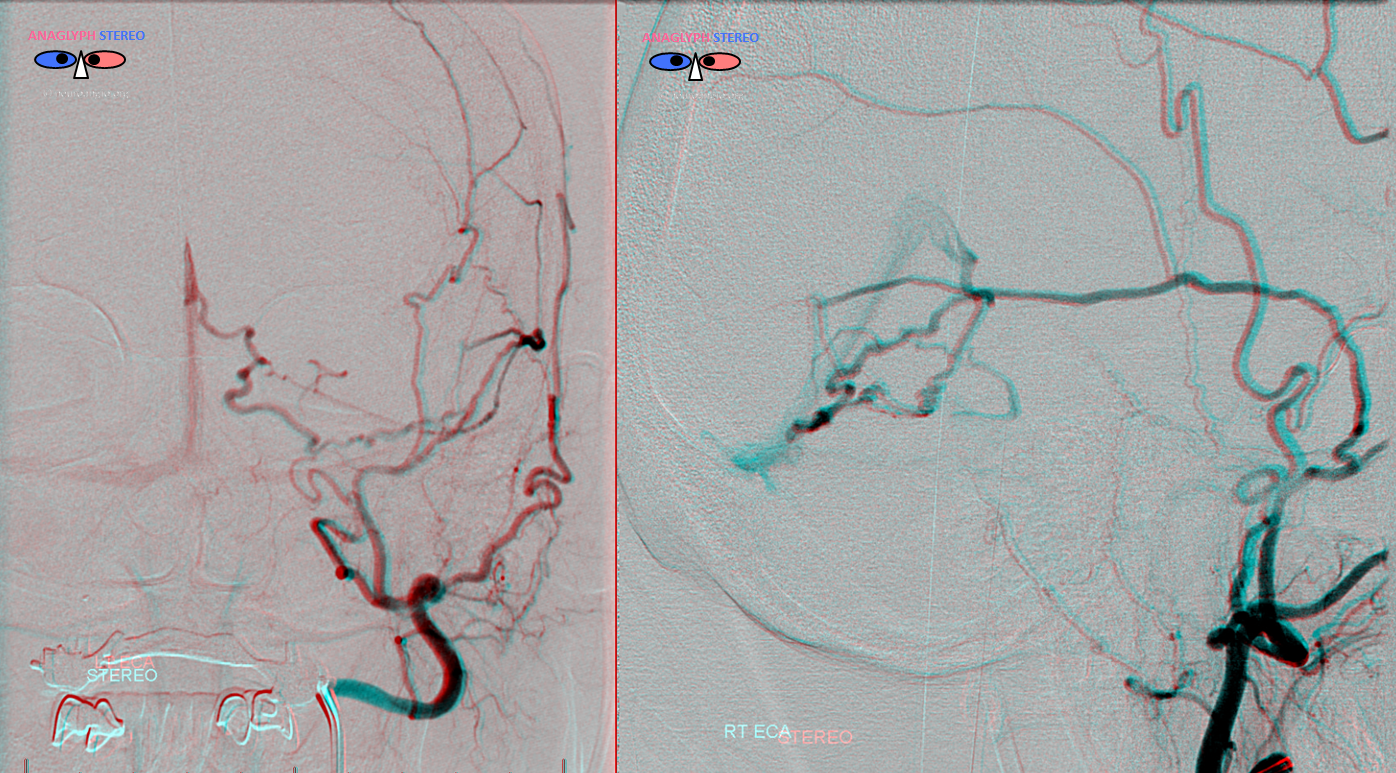 Finally, common carotid injection with arterial phase mask shows artery of the sigmoid sinus paralleling the course of the sinus 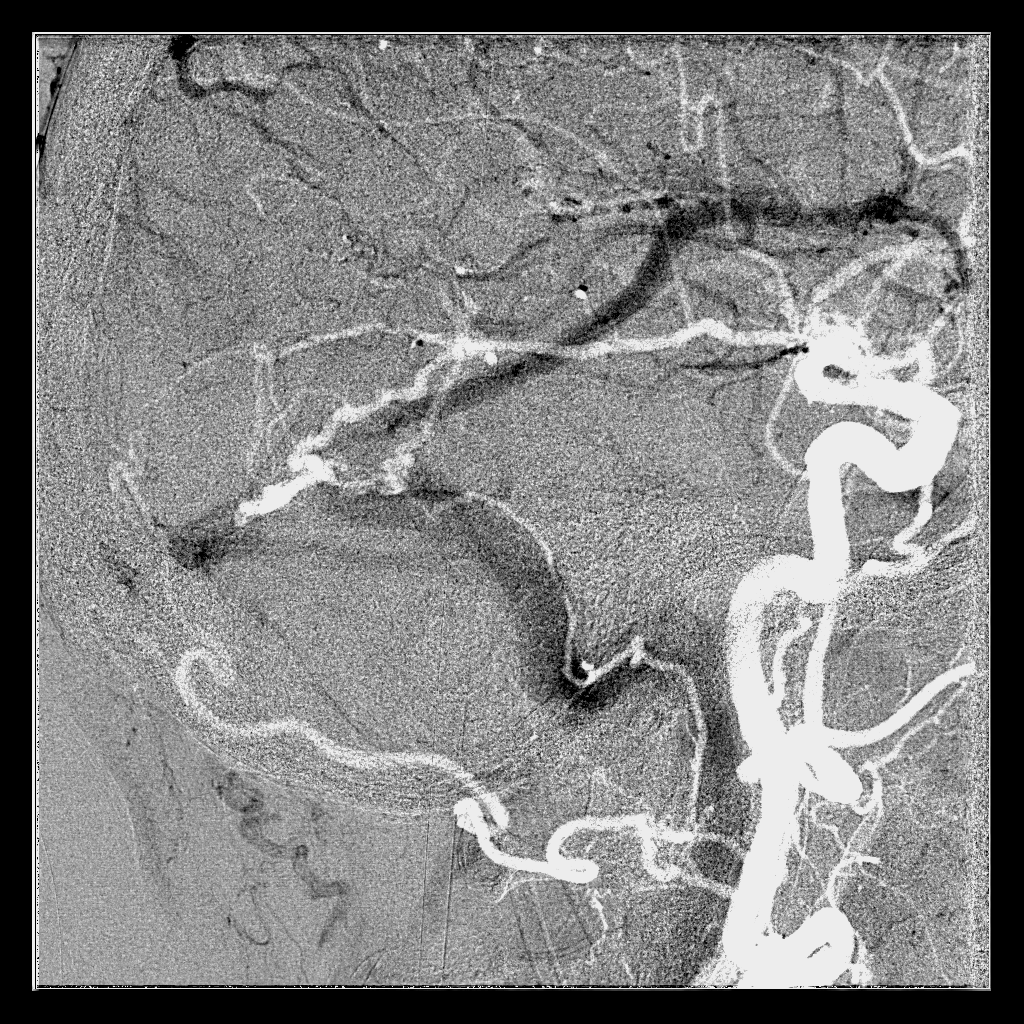 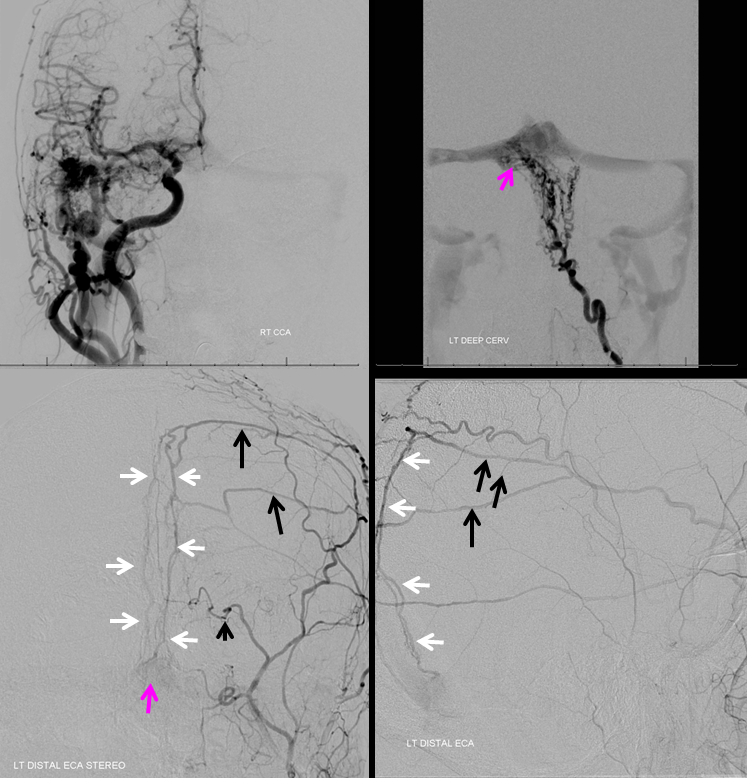 Same case, image below  — supply via artery of the straight sinus (black arrows) 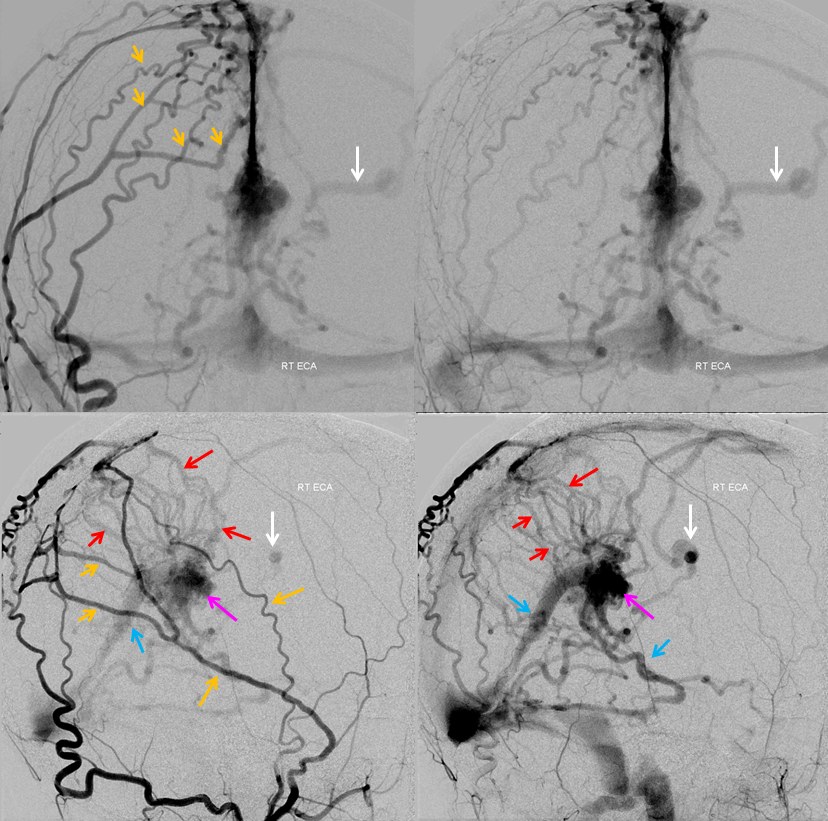 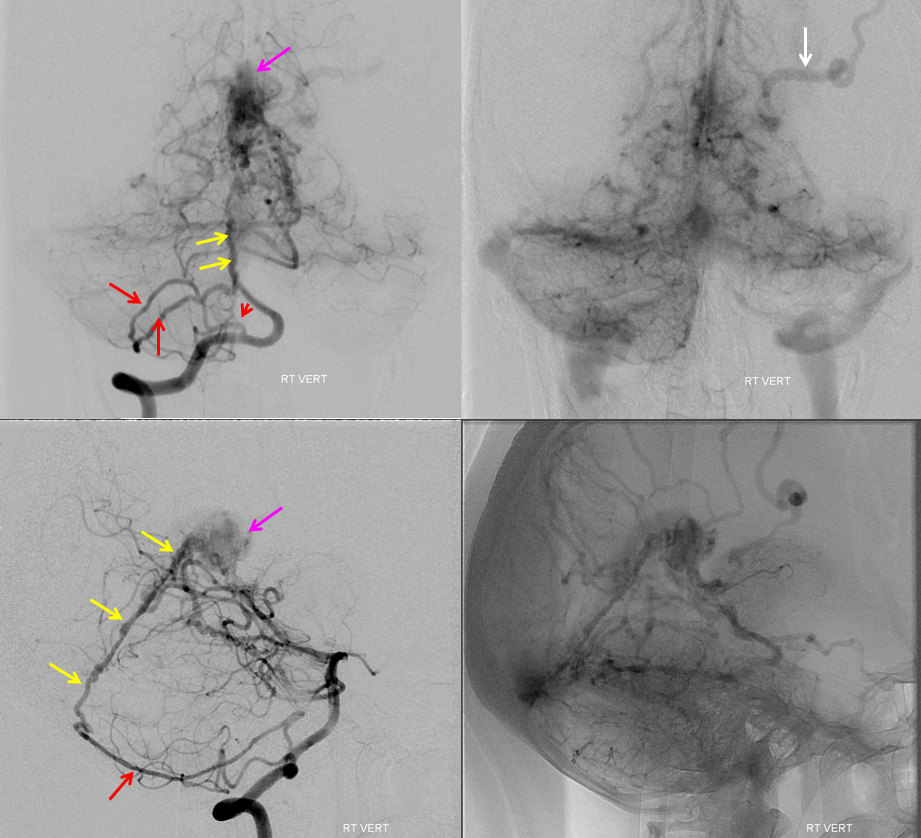 Sump from AVM reverses flow in the ophthalmic artery (red) with primary retrograde supply via the sphenoidal artery (orange) branch of the MMA (yellow).  As a consequence of AVM reorganization, an autosynangiosis of the mid-sagittal anterior frontal convexity developed, supplied by two Superior Sagittal Sinus Arteries (blue arrows). 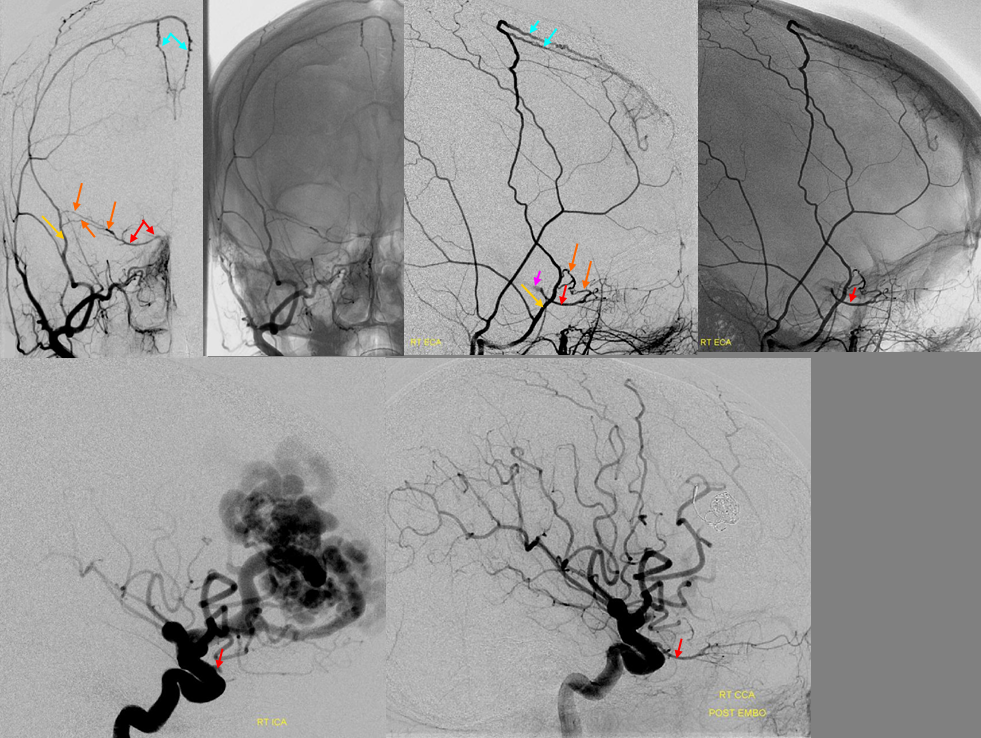 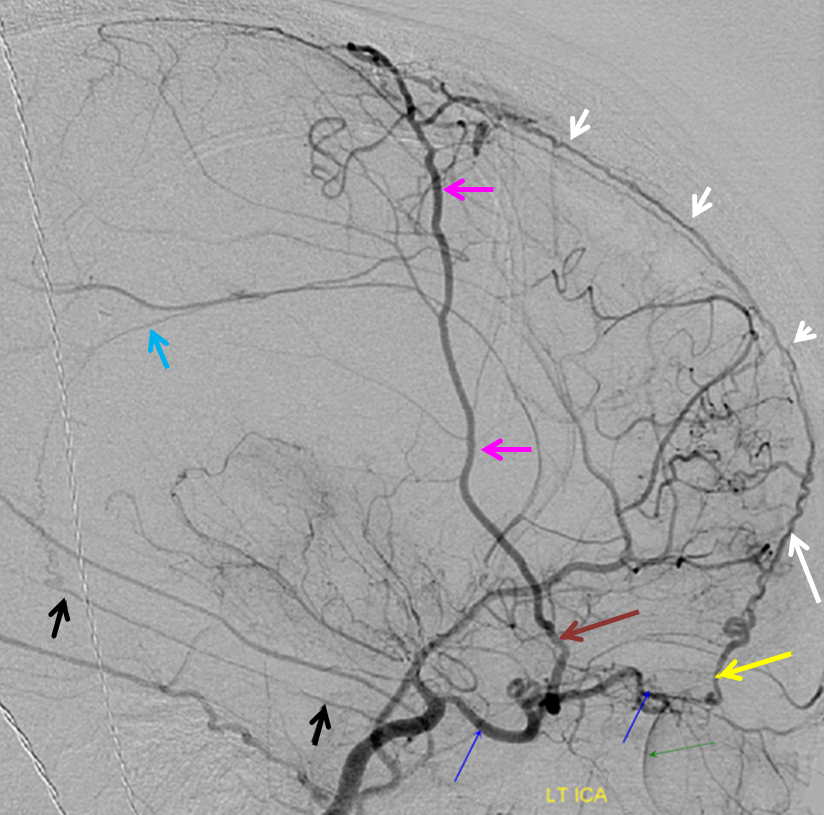 Patient with bilateral Moya-Moya, post bilateral dural synangiosis and burr hole (see Intracranial Collateral Pathways for the remainder of this case).  Stereo image pair on top, with dural/ arterial vasculature in white, and venous outflow in black, outlining an arterial arcade which runs within the dural sheath of the transverse/sigmoid sinuses, partly made up by the jugular branch of the neuromeningeal trunk of the ascending pharyngeal artery.  Anastomoses with middle meningeal and occiptal branches are clearly demonstrated.  These arteries frequently participate in supply of sigmoid sinus dural fistulas. 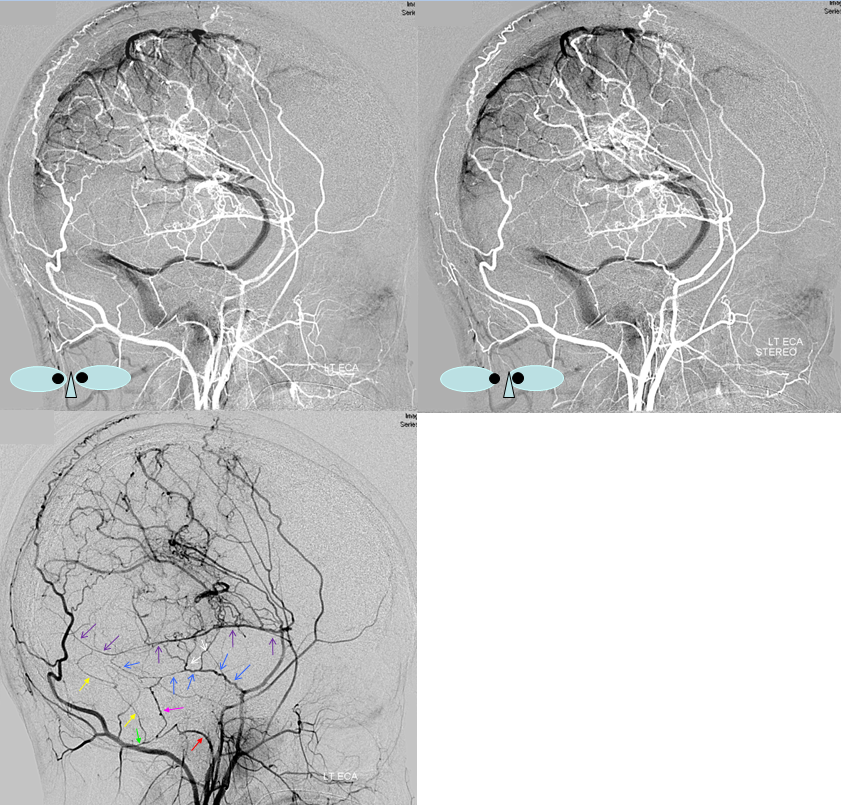