There are many ways to embolize tumors preop, pretty much anything has been advocated — particles, nBCA, Onyx, ethanol, you name it.  Our choice is particles.  The advantages from our perspective is safety and permeation of tumor capillary bed.  Occasionally a tumor has one or two isolated pedicles supplying it with no effective collaterals.  This kind can be taken down by proximal pedicle closure with anything even coils.  However this is a minority and most such tumors are located in areas that dont need embo anyway.  For the more serious locations like skull base, there are usually multiple sources of supply, some of which may be prohibitively hazardous to embolize (for example pial indirect supply).  In such cases, which are the bulk of referrals for preop embo, particles are in our opinion the safest and most effective option. Small particles will permeate tumor vascular bed for effective devascularization.  Frequently, stretegic catheterization will allow one to push particles from one pedicle into territory of other pedicles, thus achieving embo of the mass from less positions than there are sources of supply.

A rather low-extending foramen magnum mening 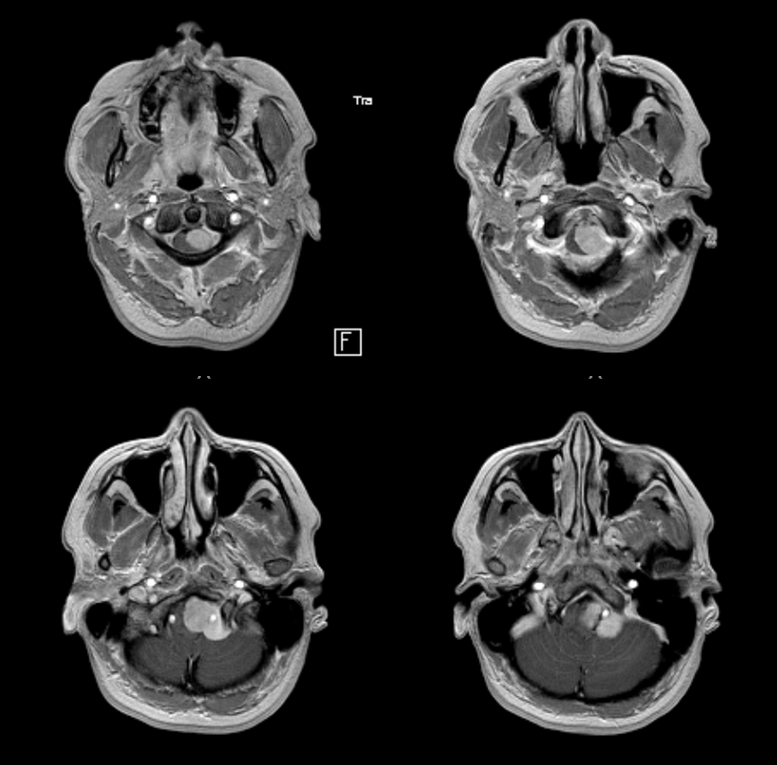 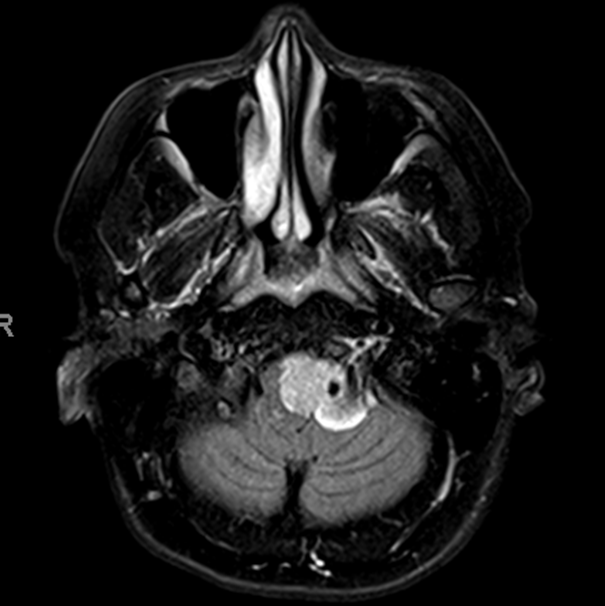 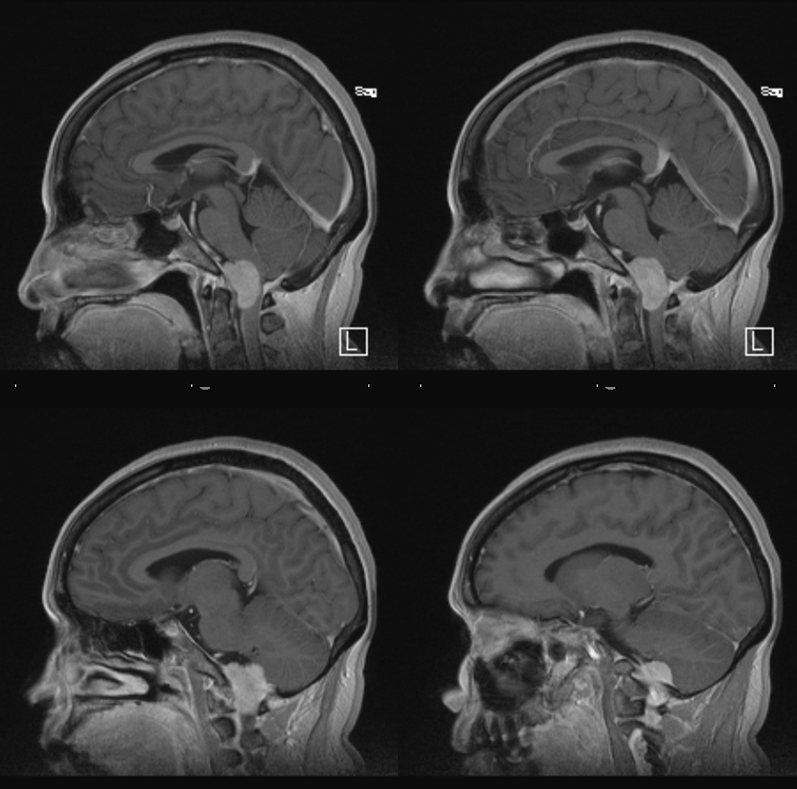 Angio shows mass effect on the left vert and PICA

Lateral vert injection mass effect on cord, in arterial phase (left) but always better seen in venous phase (right) where both anterior and posterior cord veins are shown as displaced 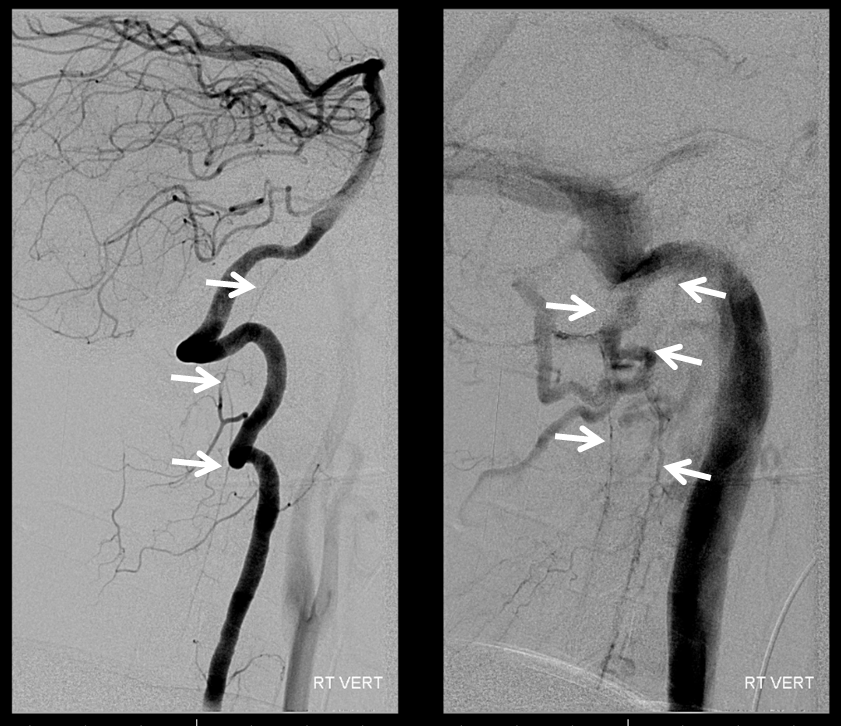 Left Ascending Pharyngeal supply is dominant reflective of the left-sided origin of the tumor.  It could have been the odontoid arcade just as well, but likely the tumor epicenter is more at the foramen magnum than C1. 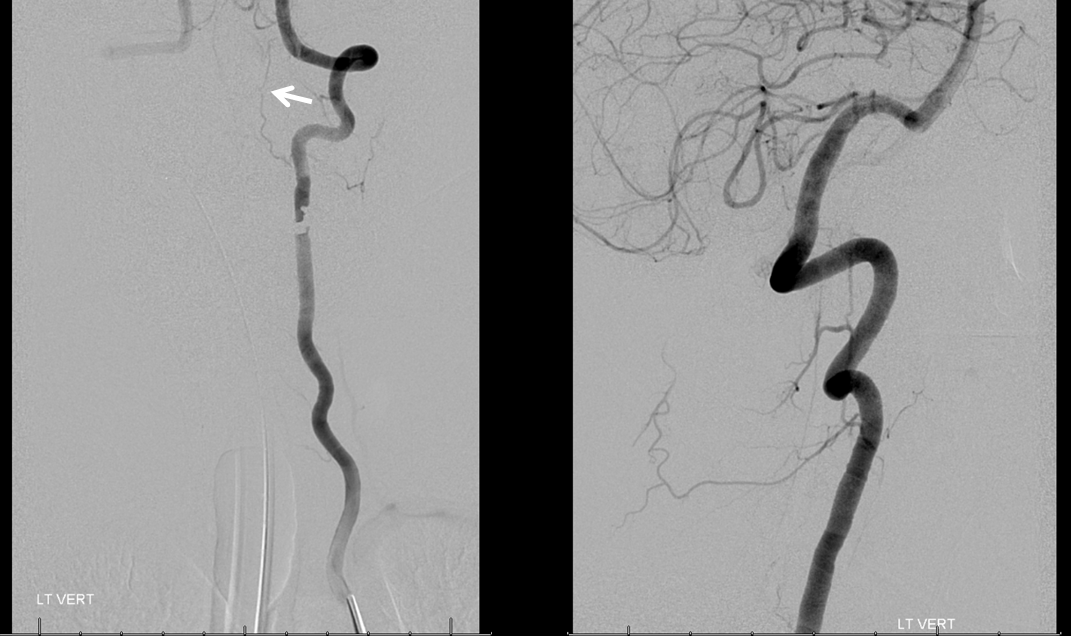 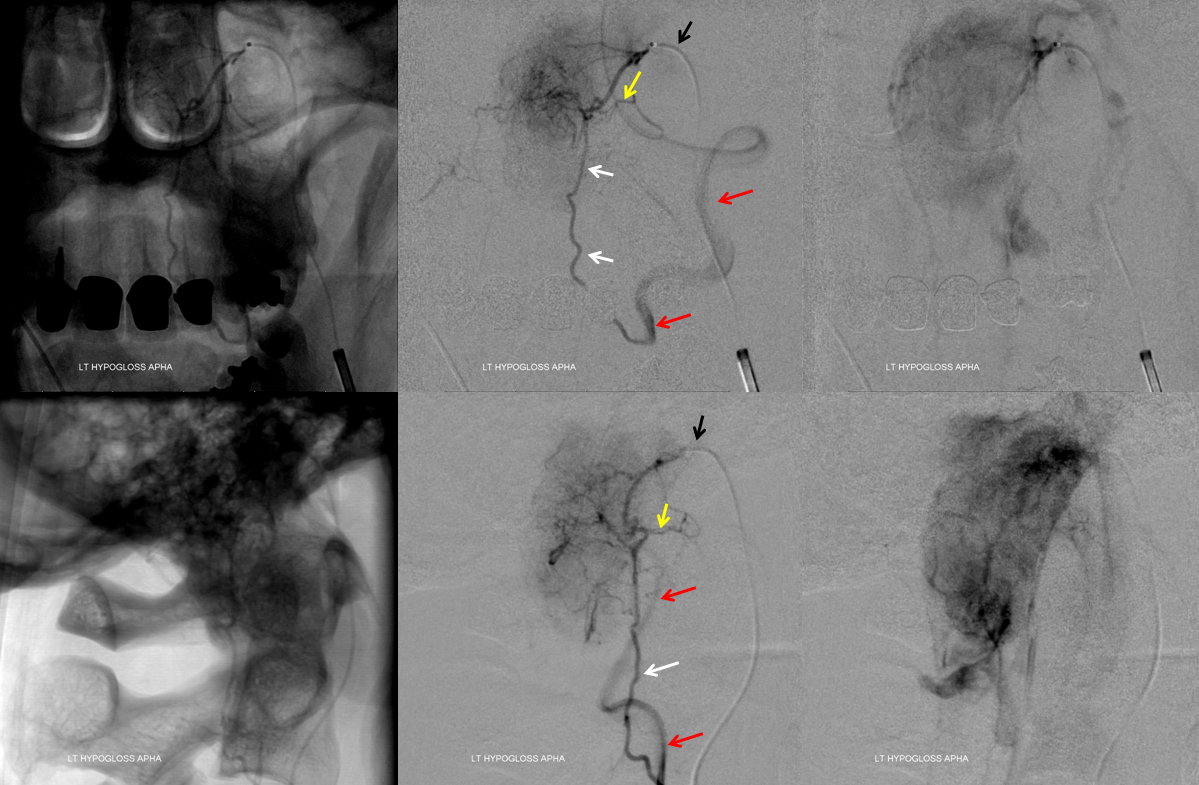 Embolizaiton with small particles (45-150 micrometer) is commenced.   Gentle push on the particle-filled syringe allows for particle permeation of the tumor vascular bed without reaching the vert.  A control injection (below) shows the effects of this kind of embo — notice how the inferior component of the tumor blush is missing — it has been embolized.  This is a control contrast injection, without particles. Care should be taken however to make sure that adequate flushing is done prior to this injection so that particles from earlier embo do not become dislodged and end up in the vert. 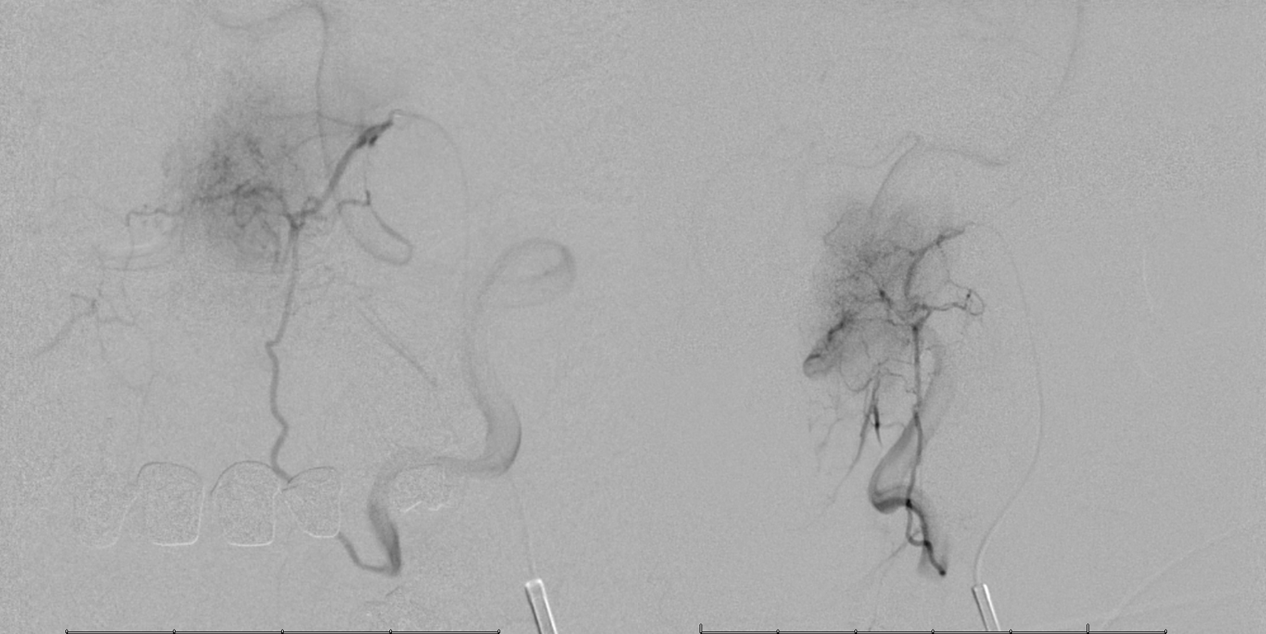 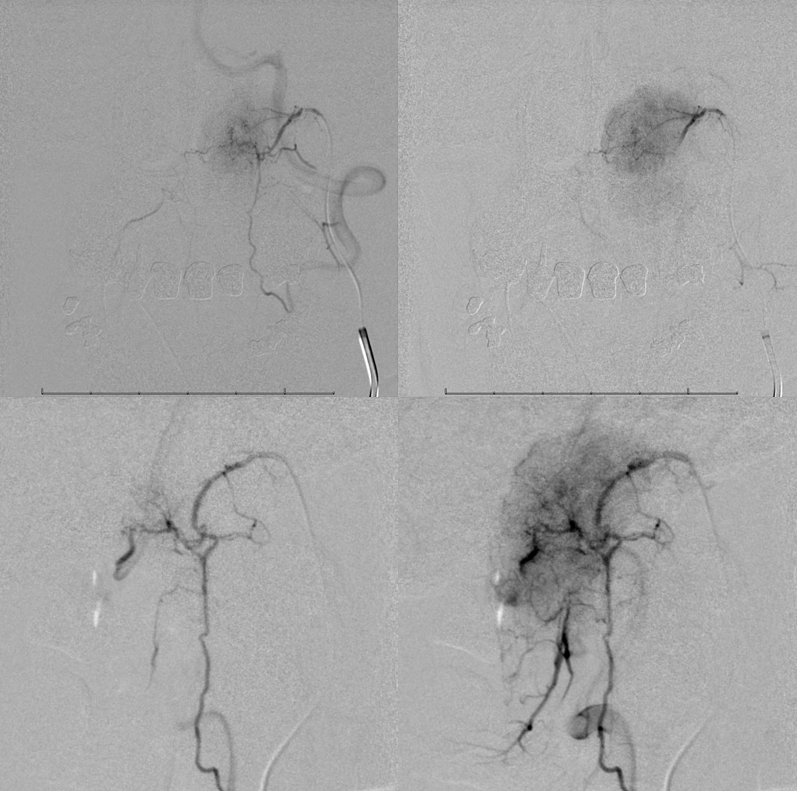 Almost done.  See how the arterial network remains patent while tumor blush is progressively obliterated.  This is what small particles do.  They preserve trunks while taking out the core. Taking out this core is the key to effective tumor embo.  It takes time but it works well in nearly all instances. 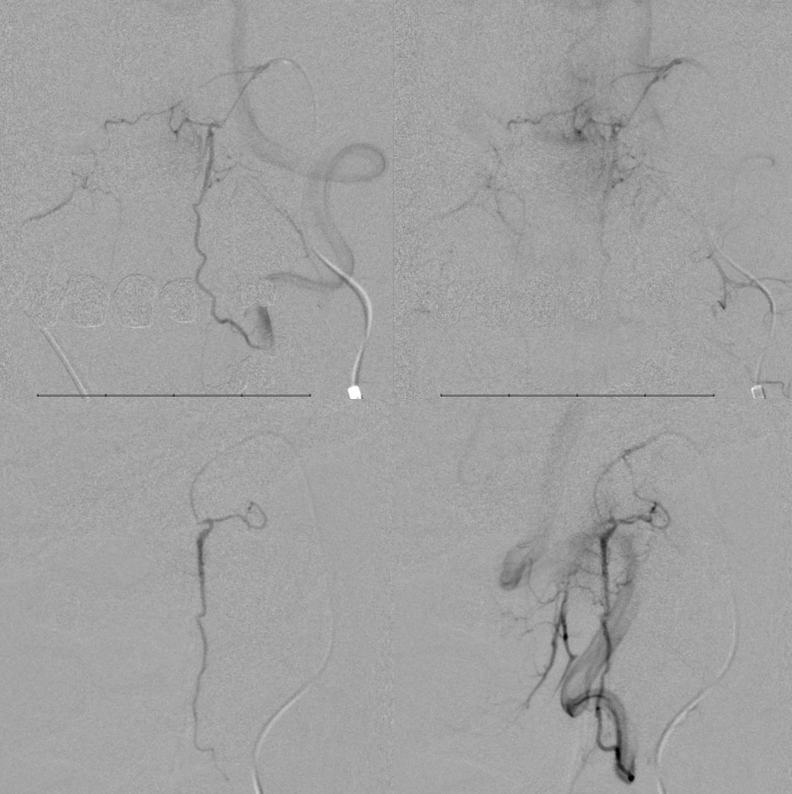 Now it is as though the tumor has never existed.  The odontoid arcade (white arrows) remains visible as is now its right-sided counterpart (purple arrow).  The tumor blush is gone. This is one of the best cases to show the mechanism of small particle embo — to primarily and directly take out the tumor parenchyma.  If a tumor has one single supply pedicle, then yes coils or glue or onyx will be helpful.  However if there is another, inaccessible pedicle, the tumor will be re-supplied by that route.  Small particles allow for an effective embo, sometimes from a single pedicle, pushing the particles into the territory of another vessels. This is exactly what happens here — the advantageous ascending pharyngeal position allowed, by pushing the particles in a controlled manner, to permeate the territory of another feeder — namely the odontoid arcade. 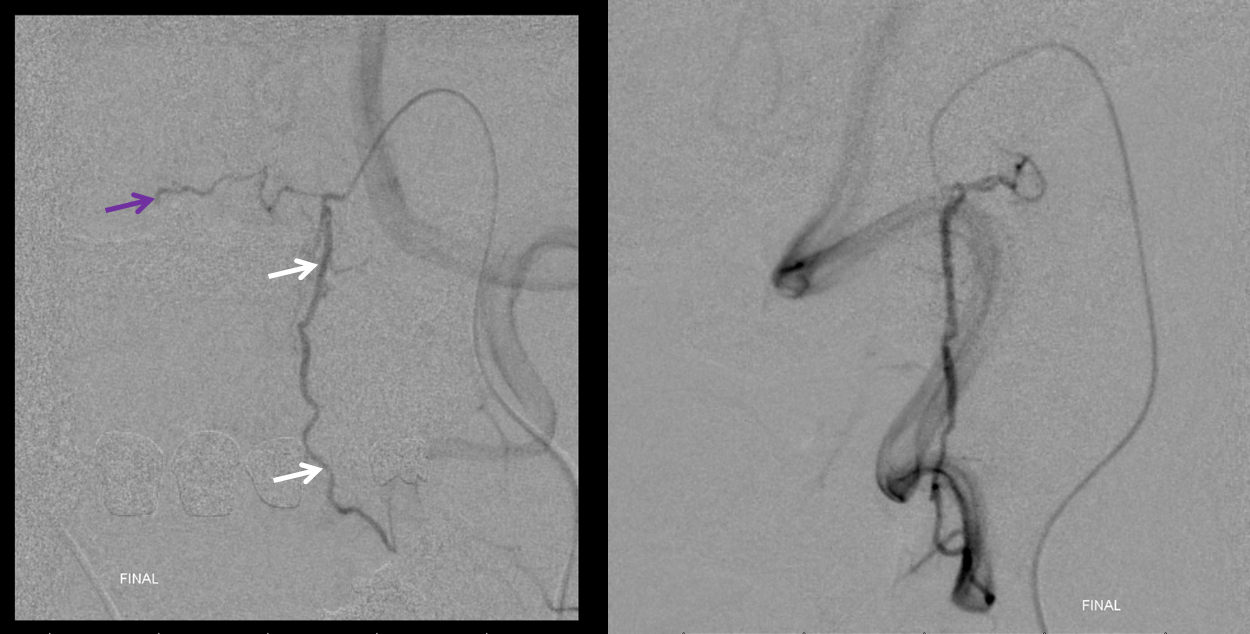 At this point one can either end the procedure or plug up the remaining trunk with coils or another embolic to mare sure there is no short-term recanalization.  Usually we use coils for this. However in this case the feeling was that coils would not prevent recanalization via the odontoid arcade (coils would go into hypoglossal division).  nBCA would permeate the whole network and be more effective in preventing recanalization.  Since the resection was scheduled for next day, i don’t think it is a big deal, but glue here is a better choice, as long as it is done carefully.  Here is a glue shot, showing its permeation of the odontoid arcade. 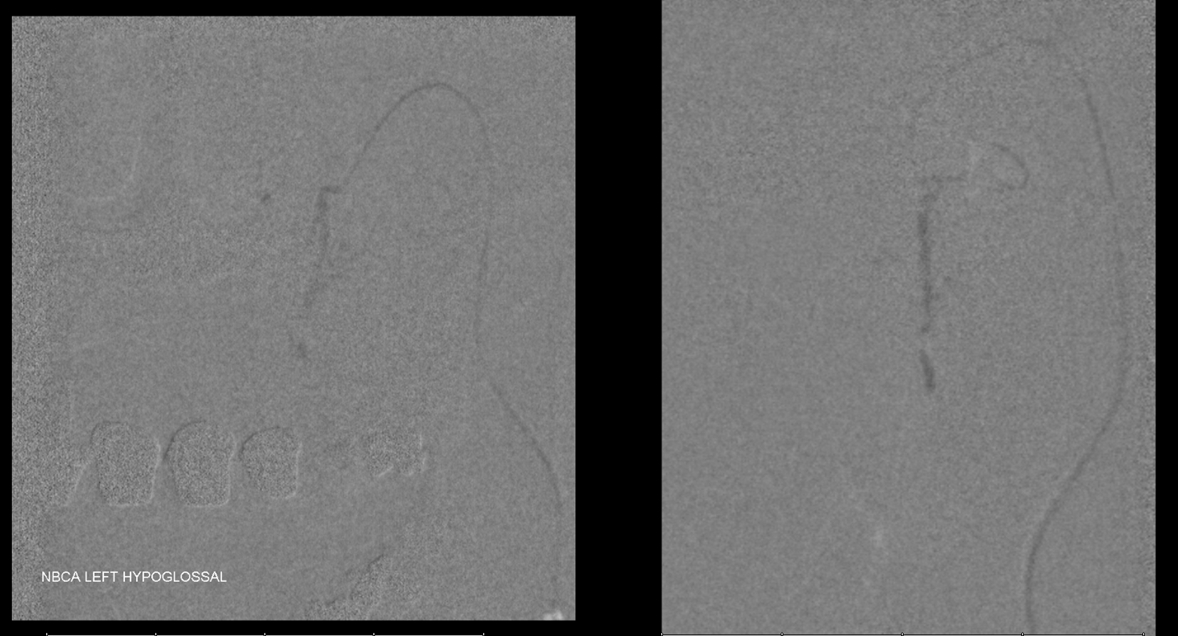 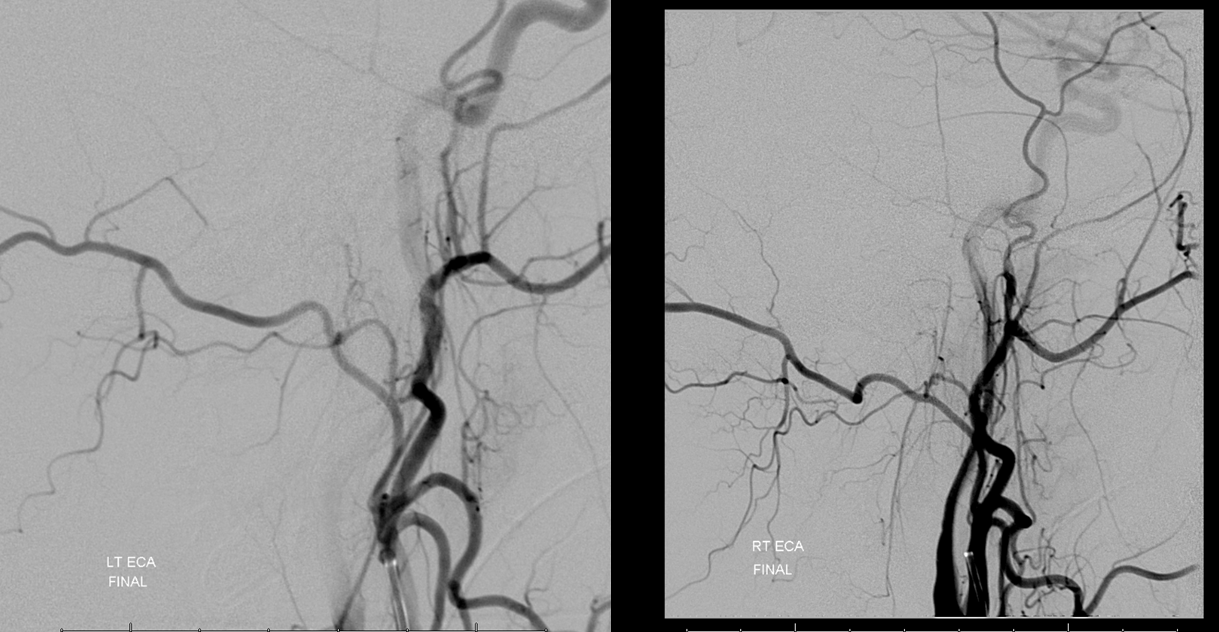 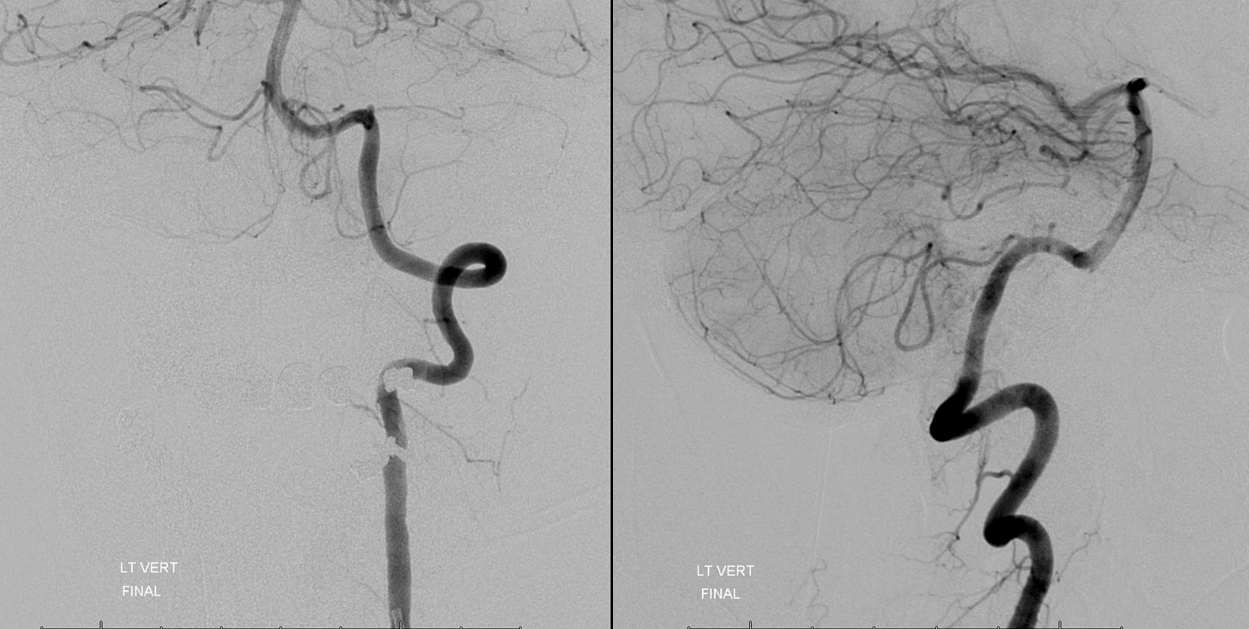 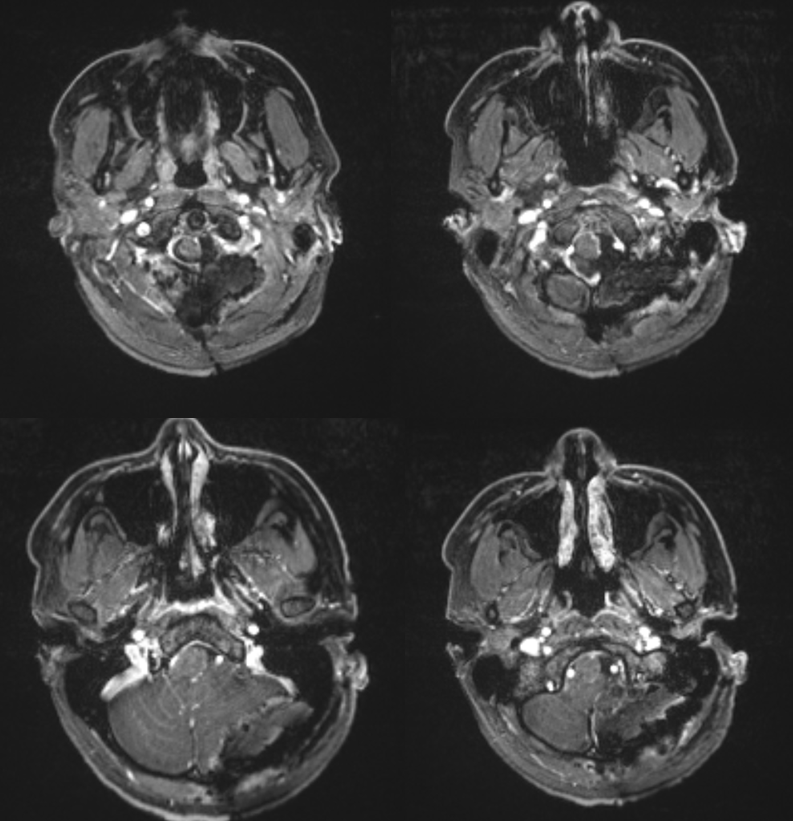 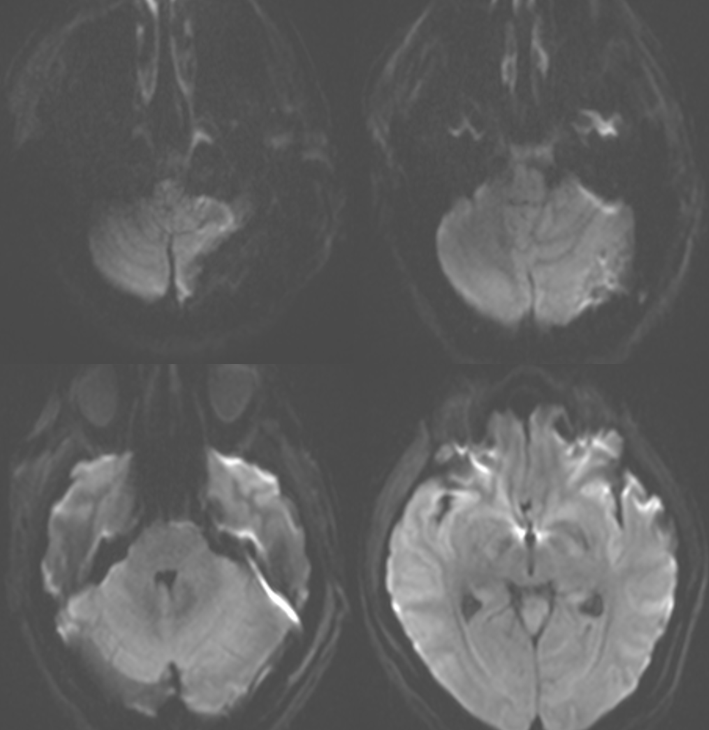