Although the Carotid Artery Web was well-described more than 25 years ago, it remains an underdiagnosed entity.  Morgenlander and Goldstein published, in “Stroke”, a classic case with corresponding histopathology to demonstrating this to be fibromuscular proliferative disorder, probably on the spectrum of fibromuscular dysplasia.   Despite this, underdiagnosis and misdiagnosis are the rule.  A separate Patient Information Carotid Web page is here

The Web is a shelf-like protrusion of what is likely connective / fibrous tissue into the vessel lumen — typically the very proximal internal carotid artery, at the bulb.  Some feel this to be a variant of Fibromuscular Dysplasia.  Most seem to be asymptomatic.  A spectrum exists, of course, from small to prominent webs. The latter cause progressively greater stasis of blood flow beyond the web, like a dam.  Cases of embolic stroke with no other identifiable risk factor are felt to be due to clot formation at the site of stasis, with secondary embolization.  The author believes in this theory.  The reason for so many adjectives of uncertainty here is that worldwide experience is quite limited.  There is an opinion that antiplatelets do not offer much protection, as the underlying cause is stasis — a la. atrial fibrillation.  Some practitioners will stent cases presenting with recurrent stroke despite medical management.  Randomized, controlled, etc. data is nonexistent, but this treatment seems to make sense. 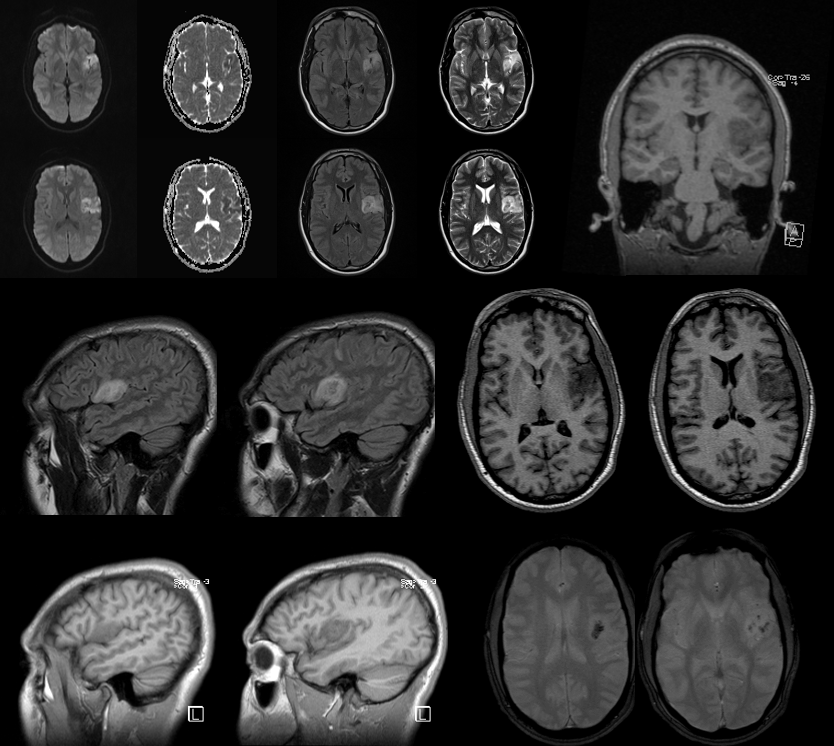 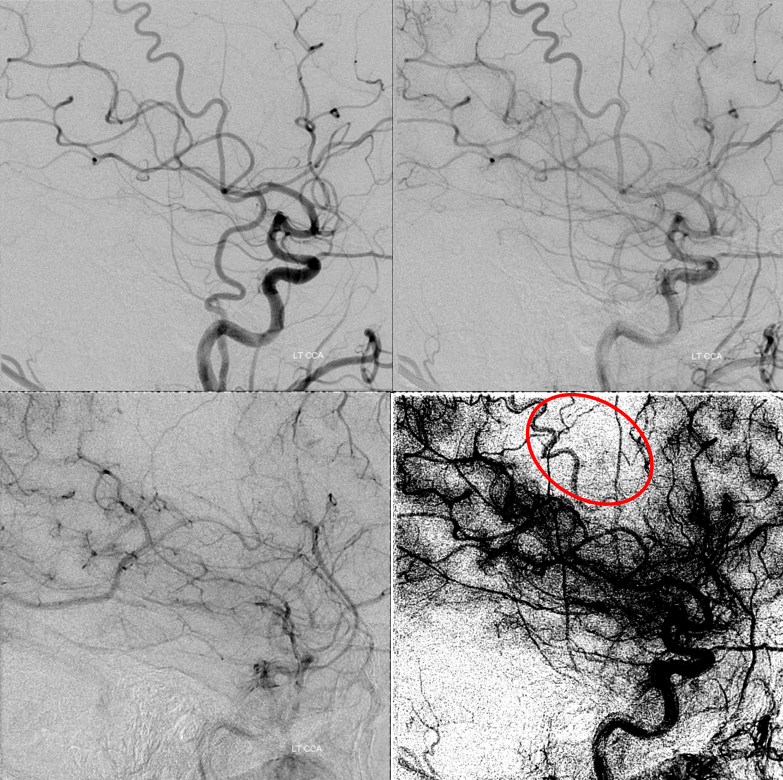 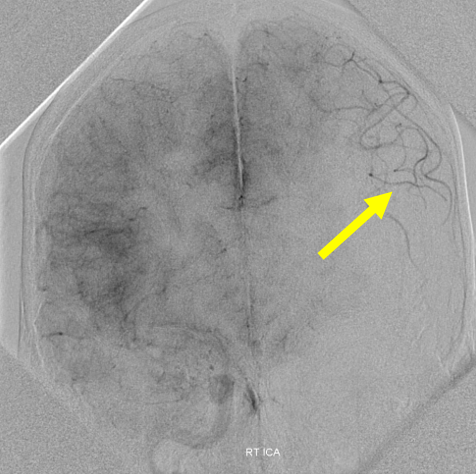 Angiography beautifully shows slipstreaming of dye (white arrow) in early arterial phase, with subsequent visualization of the web (yellow) and marked contrast stasis (purple) in late venous phase just distal to the web.  No other cause for embolic stroke was found

Case 2 — Asymptomatic, multimodality imaging.  This person had the web, initially misdiagnosed as a dissection, followed by every imaging modality available.  It is a nice illustration of what a web looks like on Ultrasound, CTA, MRA (contrast and noncontrast) and finally catheter angio.

First came the Carotid Duplex.  Because it relies heavily on flow, the web can be difficult to differentiate from cholesterol plaque on duplex. A flow change is seen (white arrow)

Then came CTA, where the web is beautifully seen

Then came noncontrast MRA.  Again, this is TOF (Time of Flight) technique which relies on flow-related enhancement. Because flow in the back of the web is slow, it is not well seen on MRA. So, it is not very helpful differentiating web from atheromatous disease here

Next came contrast-enhanced MRA. Not as good as CTA here, but definitely good enough.  It is our preferred method for following webs, as no radiation is involved.  The left side is normal

Finally, because of another question (possible aneurysm) the patient underwent a catheter angiogram. It shows the web best, of course.  However, it is minimally invasive and we do not angiograms for webs — a CTA or contrast MRA is sufficient.  This angiogram was done for another reason

Yet another example, asymptomatic different patient, below

Basically, they all look about the same.  A wedge-like, longer than wide, triangular-shaped protrusion into the ICA from the back (dorsal aspect) of the carotid bulb.  Most are associated with contrast stasis at the back part of the vessel in venous phase.

Because angiography can only visualize the lumen, and not the artery wall, we rely on morphology of the shelf-like protrusion rather than its tissue contents.  We expect vessel wall imaging to help differentiate web from cholesterol plaque in a non-invasive fashion at some point.  Here is the angiographic schematic 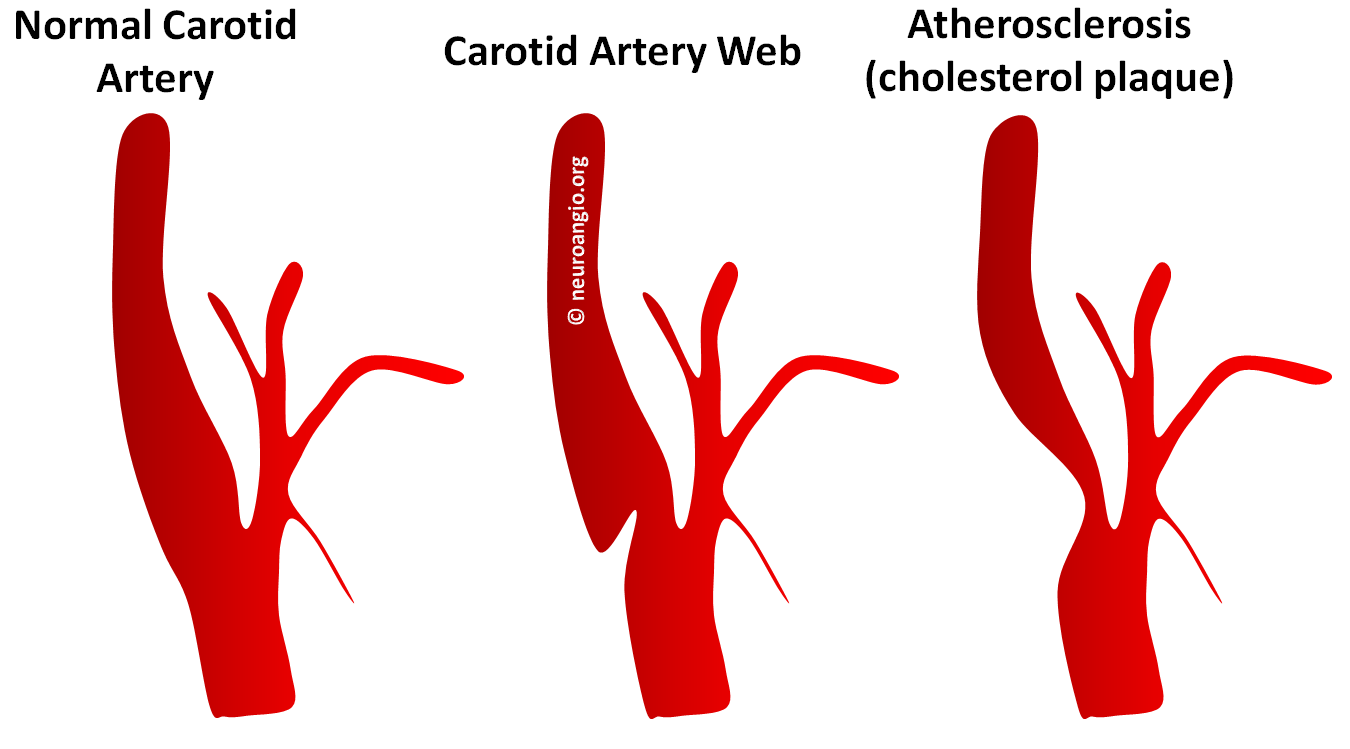 Below is an H&E histology section of the Web from Morgenlander and Golstein, diagnosing it as Intimal Fibroplasia rather than atheromatous lesion. 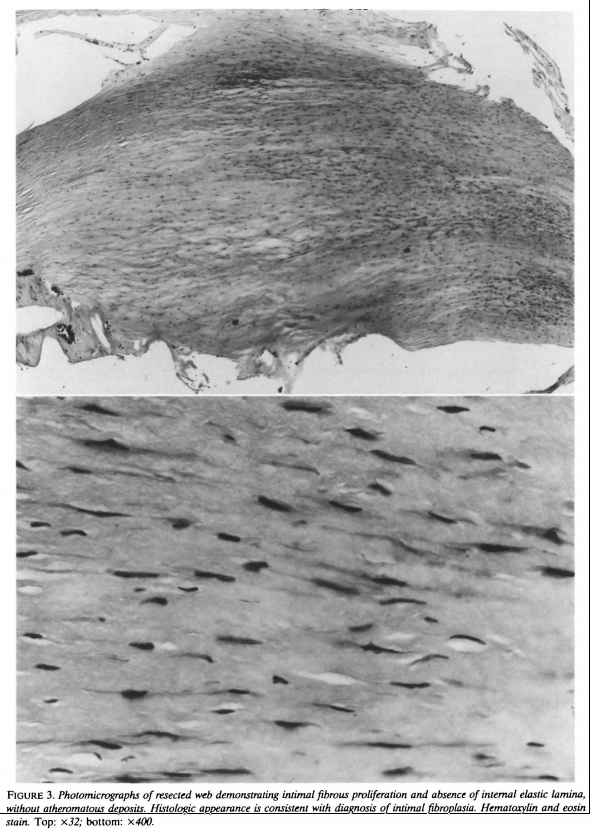