This case is an illustration of the ability of the cerebral angiogram to highlight the pathoanatomy of the Sturge-Weber Syndrome (SWS), also known as Encephalotrigeminal Angiomatosis.

SWS is part of a family of neurocutaneous disorders, characterized by abnormalities of ecto- and endoderm.  The cutaneous part is a port wine stain (in CN V distribution).  The brain part is described below.  About 1/3 of patients only have the skin part, 1/3 have only brain, and 1/3 both — no rocket science here.  The cause is unknown.  There are many sources of excellent information on the Web, but I am afraid that most individuals do not appreciate the underlying vascular issues of SWS in the brain, which is illustrated angiographically below.

Cerebral manifestations of SWS appear to stem from abnormal development of the venous system — particularly surface veins.  The halmark of venous imaging is absence of superficial veins (including basal vein, which is only deep as far as the surgeon is concerned, being in fact a superficial vein on the undersurface).  As a result, venous drainage is impaired, with secondary tremendous venous congestion.  The congestion leads to engorgement of countless small veins thoroughout the parenchyma, and particularly on the gyral surface.  This produces the characteristic gyral enhancement seen on MRI, and venous congestion that is better appreciated angiographically.  The characteristic gyral calcifications probably result from chronic venous congestion.

This is a young patient with intractable seizures. 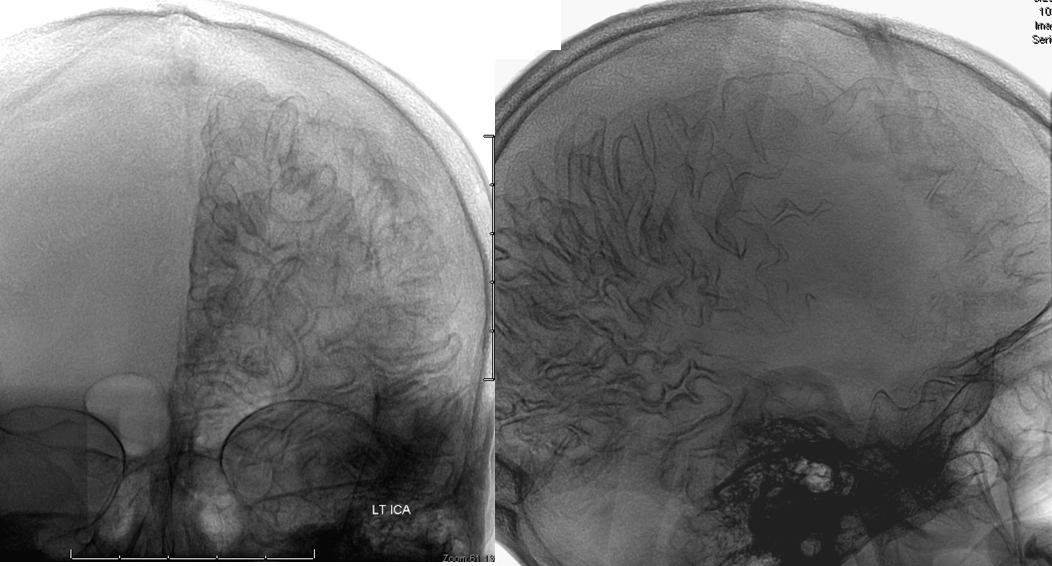 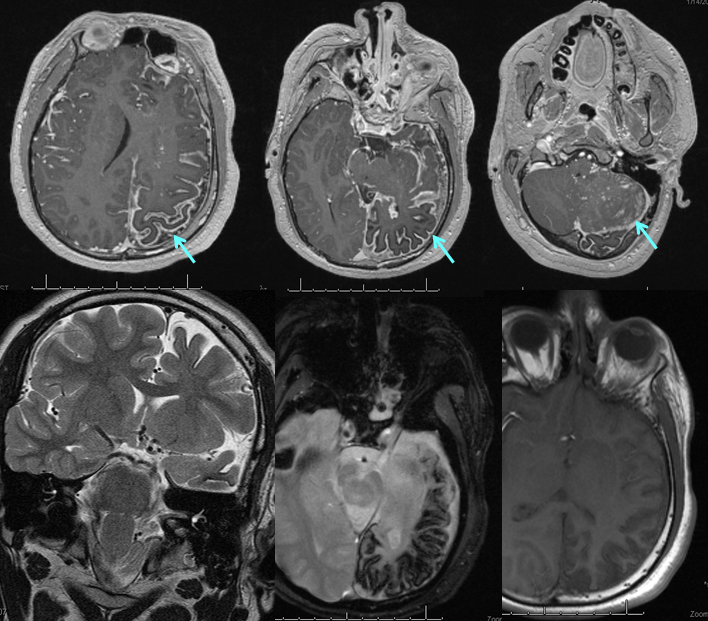 TOF and venovibe images; almost normal venous pattern on the right, and gyral enhancement (arrows) as well as transosseous venous channels on the left. 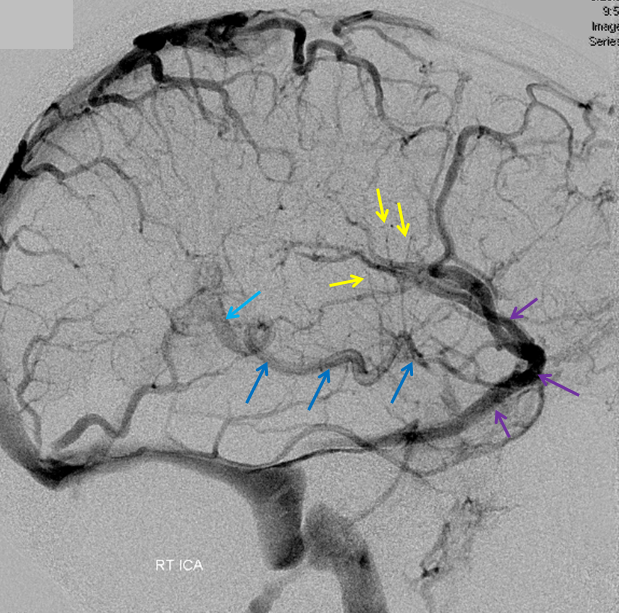 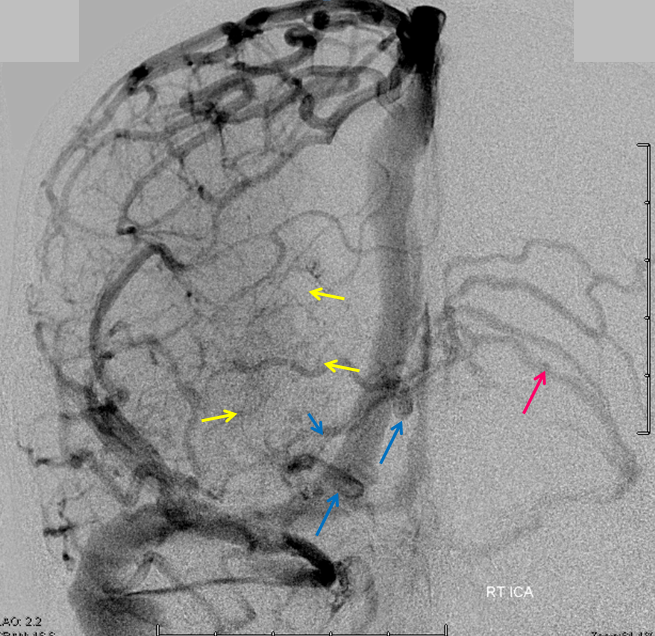 The same R ICA injection, in AP projection.  Notice multiple venous channels draining the anterior frontal lobe over the left convexity.  They are intra-osseous veins, and well seen on the venovibe MRI image of the left hemisphere (no labels on that one).  The basal vein is blue, and its deep tributaries are yellow. The internal cerebral vein is missing.  Its territory is drained by the basal vein.  I don’t understand the developmental physiology of why it is missing. 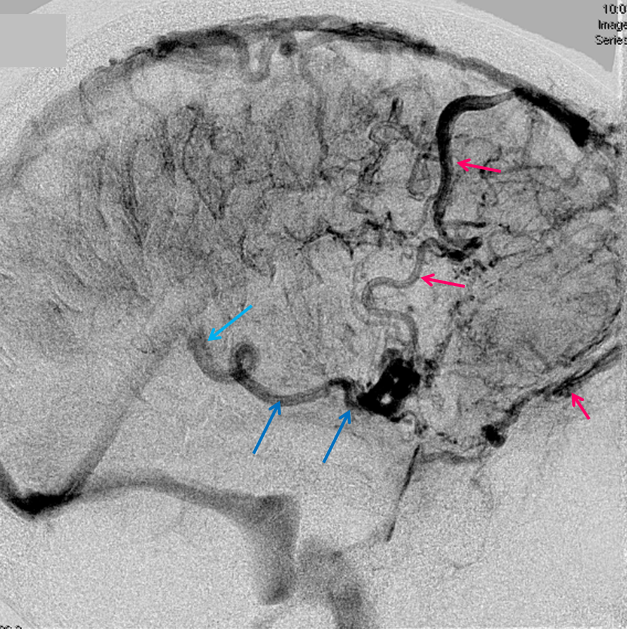 This is a lateral view of the abnormal hemishere, left ICA injection, in late venous phase.  The image is characterized by near-complete absence of surface veins and tremendous venous congestion.  Appreciate how gyral calcifications, seen on the x-ray image above, are greatest over the areas with least superficial venous drainage. Over the frontal lobe, where several surface veins (pink) have developed, the calcifications are less pronounced.  The basal vein is labeled in blue.  Why is the basal vein seen? 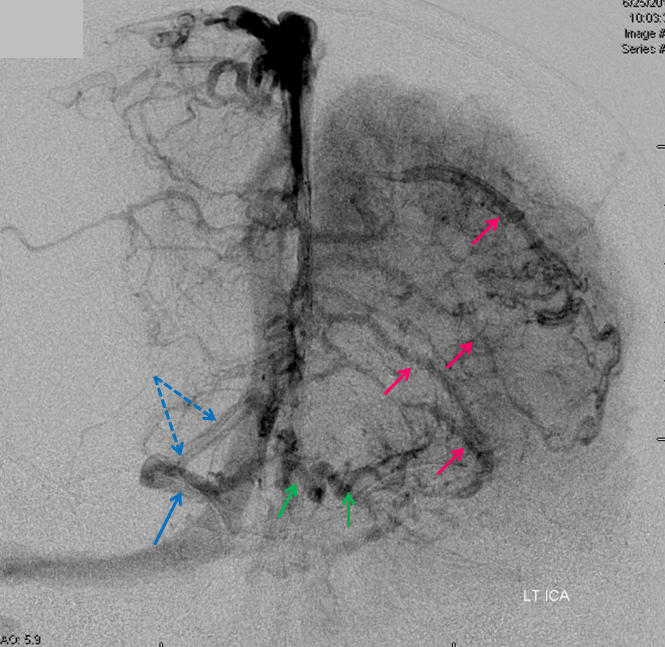 AP views of left ICA injection.  The basal vein seen on the lateral study belongs on the right side.  It is draining both hemispheres, hence its large size.  Left-sided tributaries (green arrows) reach the right side across the posterior communcating vein (interpeduncular vein) which connects the two basal veins in front of the brainstem. 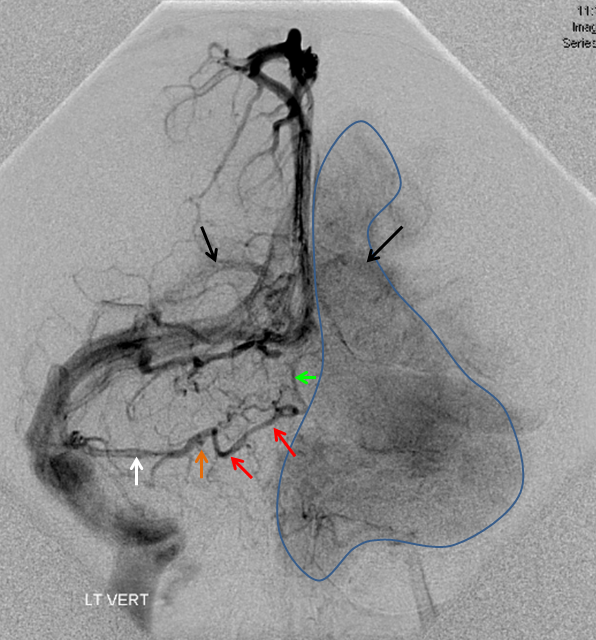 The disease is not limited to anterior circulation.  Even more tremendous venous congestion (blue outline), with no effective surface veins, afflicts the left cerebellum, brainstem, and posterior cerebral artery territory, in stark contrast with normal right side.  The brainstem drains almost exclusively via a large lateral mesencephalic vein (red), into the petrosal vein (beige), and ultimately into the superior petrosal sinus (white).  An anterior mesencephalic vein (green) points straight up from medial aspect of lateral mesencephalic vein. 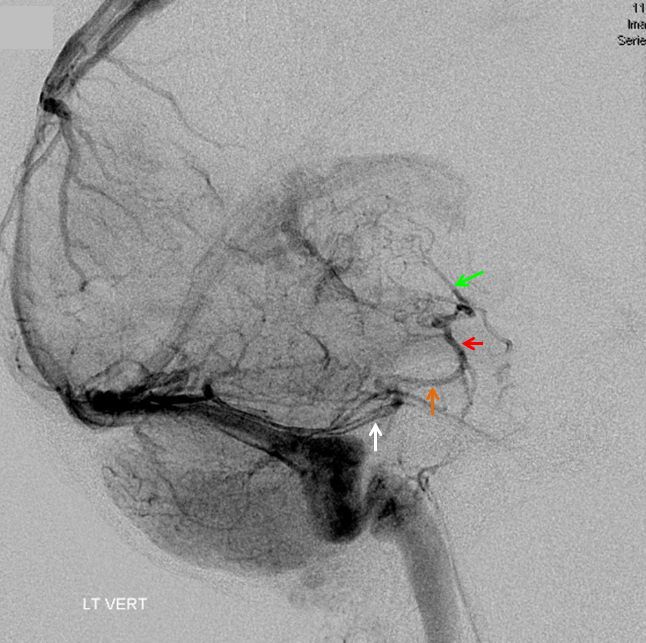