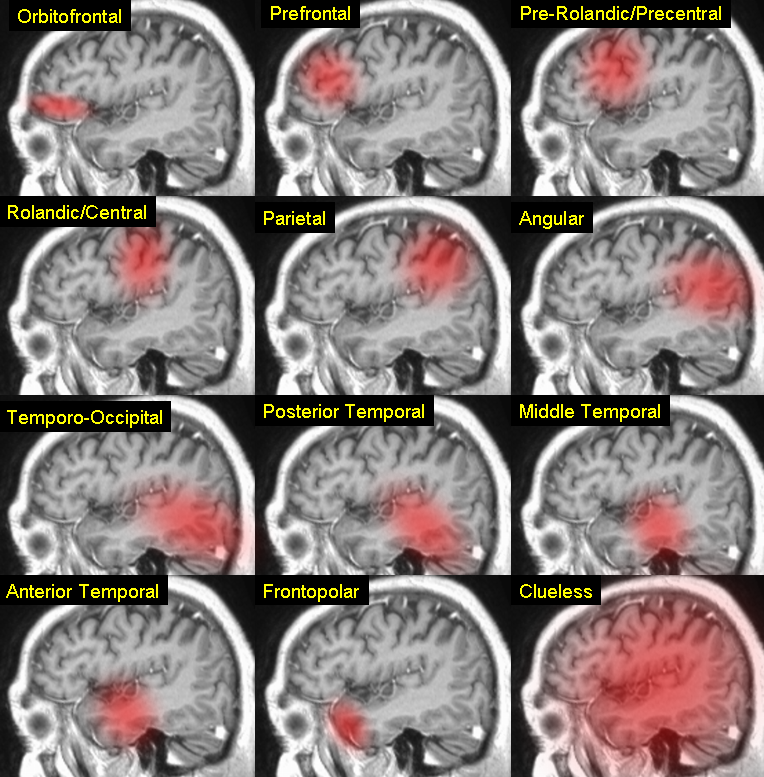 The Middle Cerebral Artery is, phylogenetically, the youngest of all cerebral vessels (see dedicated Neurovascular Evolution and Vascular Neuroembryology for more detail).  This situation corresponds with relatively recent development of the neocortex in the “higher species”  Briefly, the MCA arises from a phylogenetically far older anterior cerebral artery (older because it vascularizes, among other things, the more primitive olfactory lobe).  A collection of “perforating” vessels, such as the future artery of Heubner, are developed in the earlier versions of the neocortext to supply the growing cerebral hemispheres.  As the cortex continues to enlarge, the “perforator” system evolves from several competing channels into a dominant vessel (the MCA) which by definition is that branch from the ICA which captures the cortical territory of the cerebrum.  The MCA, in its current form, has multiple perforator vessels of its own.  The origins of the MCA help explain some of the variants we have come to appreciate — the duplicated MCA is nothing more than a disposition of two “perforator” vessels remaining in balance instead of selection of a dominant single trunk.  Relatively few MCA variants are present, the accessory MCA being the most important one.  A nomenclature system of Manelfe (type I, II, and III) was used in the past to describe the relative sizes of the two MCAs but it has not evolutionary or functional significance.  The important thing to know is from which of the MCAs the perforators come from, as this has the most clinical implication.  The type III accessory MCA is instructive however since it represents not an accessory MCA but in fact an enlarged artery of Heubner which has taken over some the surface cortical territory.  This again underscores the origin of MCA as a perforator vessel, much like the Heubner, the medial or lateral MCA perforators, etc.

The MCA has two divisions — superior and inferior.  Again, there is plenty of nomenclature and discussion about bifurcations, trifurcations, etc.  These are helpful only to the extent of aiding communication and reporting.  The only issue of importance is from where, in each individual case, the various MCA candelabra vessels arise, and where they go.  Broadly speaking, there is usually a dominance of either superior or inferior division.  What that means is the following — the superior division will always by definition be responsible for the frontal convexity.  The inferior division will supply the temporal lobe, in balance with temporal branches of the PCA.  The parietal lobe is variable — when supplied by branches originating from inferior division, we see larger inferior trunk and therefore the inferior division is dominant.  Same goes for superior division dominance.  Trifurcation may reflect a separate parietal lobe trunk or any sort of combination / permutation of the many MCA branches.  There is really not much more there to discover.  Also to mention, the anterior temporal branch often comes from the M1 segment before its bifurcation or trifurcation, so don’t call the first branch point an MCA bifurcation.  Look for the big divide.

What the MCA lacks in evolutionary importance it more than makes up in clinical relevance — and in that sense the study of and “feel” for all the branches when treating a stroke or operating on a tumor are obviously critical.  For example, pioneering work by Dr. Kelly of our own NYU fame has emphasized thorough knowledge of MCA perforator location with respect to target surgical lesion to minimize operative morbidity — tumors which displace the perforators medial to the mass have the comparatively lowest incidence of postoperative deficit secondary to perforator injury.  (Ref: Resection of insular gliomas: the importance of lenticulostriate artery position Moshel, Yaron A; Marcus, Joshua D S; Parker, Erik C; Kelly, Patrick J 2008 Nov;109(5):825-34, Journal of neurosurgery)

The M1 segment can be long, short, or anything in between.  Again, no particular anatomical interest but has definite surgical implications.  The debate as to whether MCA has a bifurcation, trifurcation, or whatever is, in my opinion, of precious little value. Anything is possible.  The surgeon is better served by studying preoperative images of every individual case than by memorizing dubious statistics of MCA configurations.

No better way to define a territory than by its occlusion.  Here is a very dominant inferior division with embolus in it (arrows).  The patent superior division only supplies the anterior and mid-frontal lobes (white oval).  The inferior division does posterior frontal, parietal, and temporal regions.  Notice leptomeningeal parietal territory support in late venous phase (black oval) 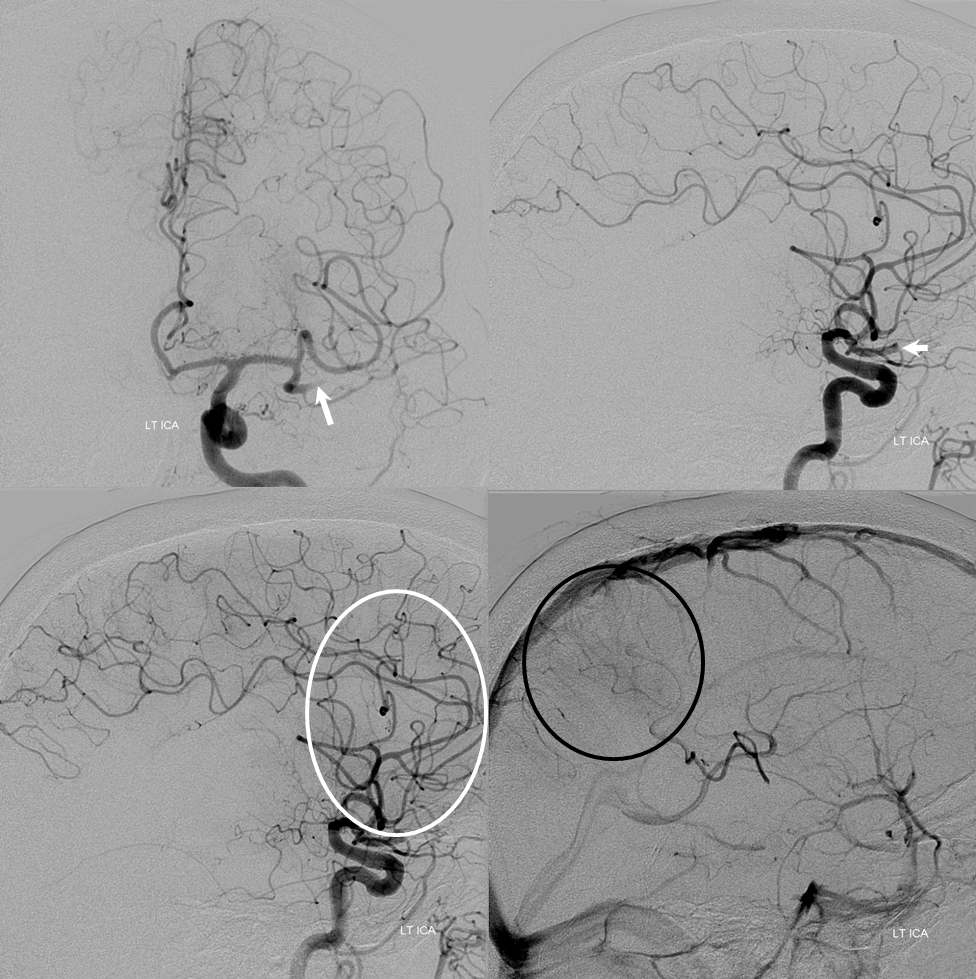 CTP of the same patient, Time to Drain.  The inferior temporal lobe is well collateralized by the PCA, while the superior convexity collaterals come from the ACA, as seen in the angio above.  The superior and mid-temporal gyri are not in such good shape.  As you know, the embolus favors the largest branch with greatest flow. 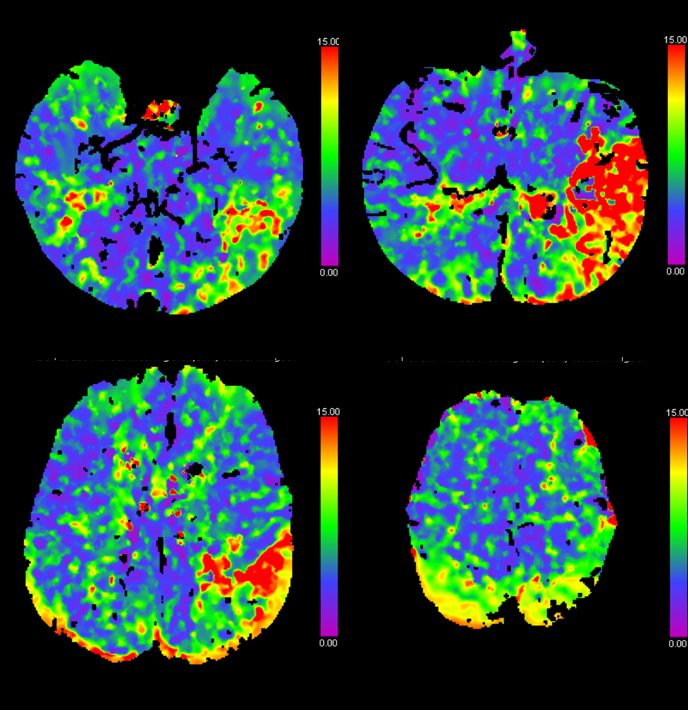 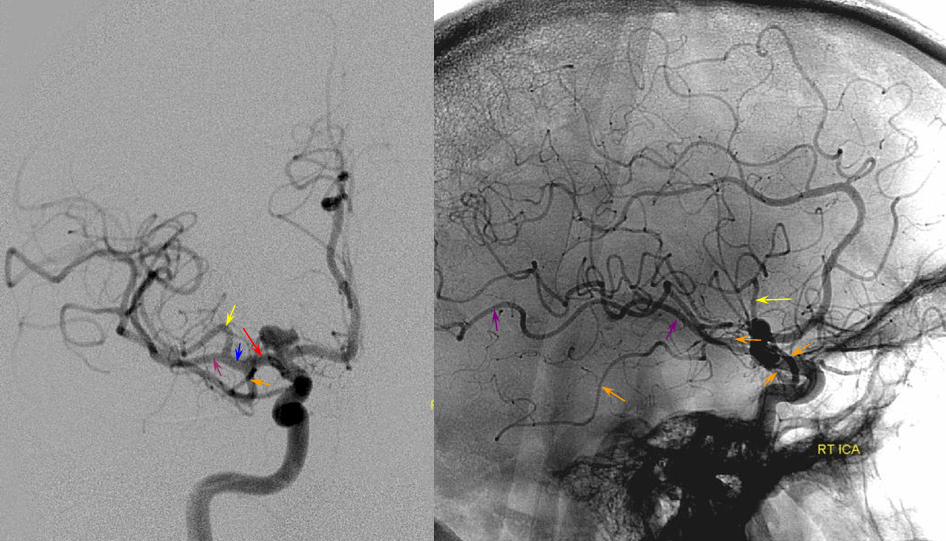 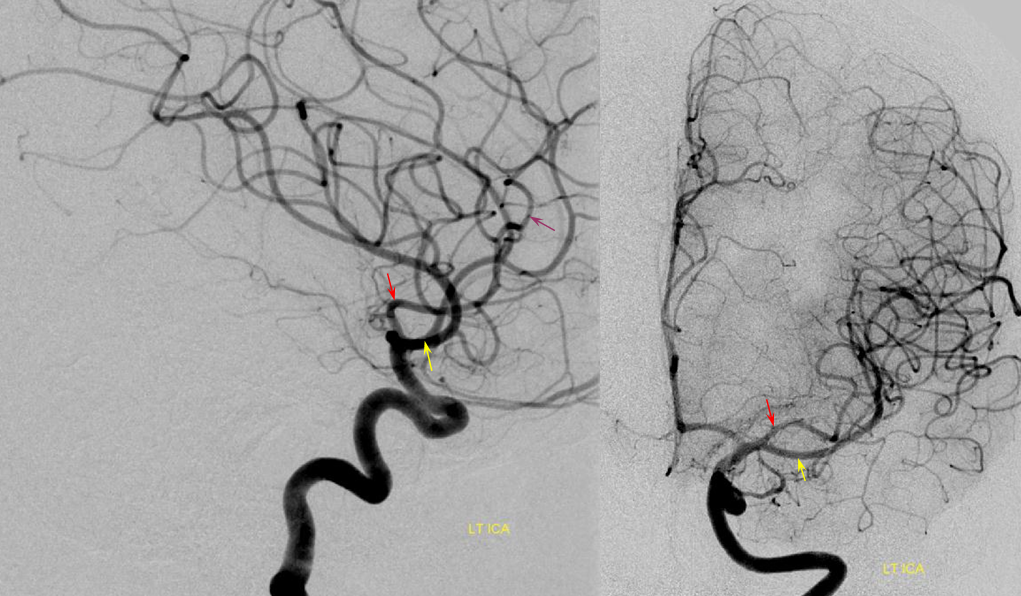 This is typically a disposition where each M2 branch takes its lobe — frontal, parietal, or temporal. Of course, the point is that all manner of variations are possible. Here is a “trifurcation” 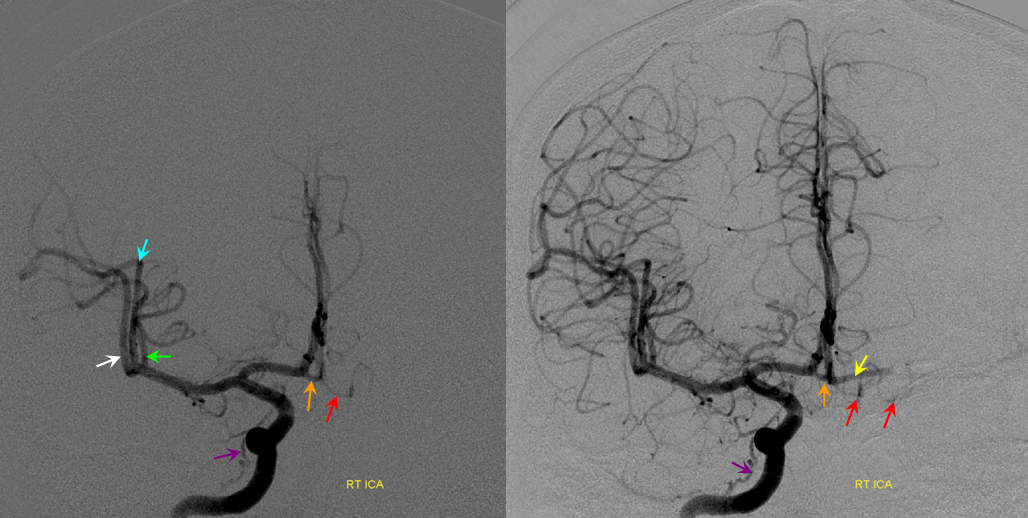 On the opposite end of the silliness spectrum is an MCA with no bifurcation.  Not too common, but serves the same point — anything in MCA is possible.  A single stem with individual branches, like a pine or a palm tree, depending on your mood — why not?  Here is another stroke, with the embolus (white arrows) stuck in the stem of your tree of choice, somewhere in the proximal third — a few branches to the temporal and frontal lobes are proximal, the parietal territory is mostly distal to the occlusion.  A peculiar early frontal branch is present (purple), but no anterior temporal branch is seen. Again, anything goes.  Bottom set of images after revascularization show persistent lack of bifurcation, with the reopened parietal trunk marked by yellow arrow. 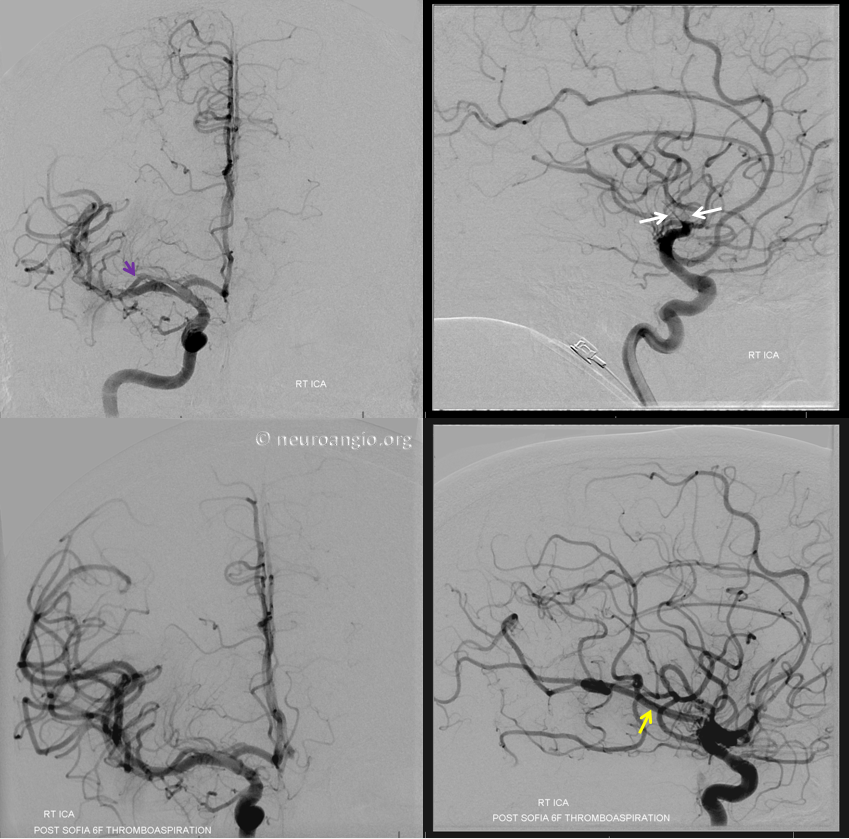 Here is another example of no MCA bifurcation, this time with stereo 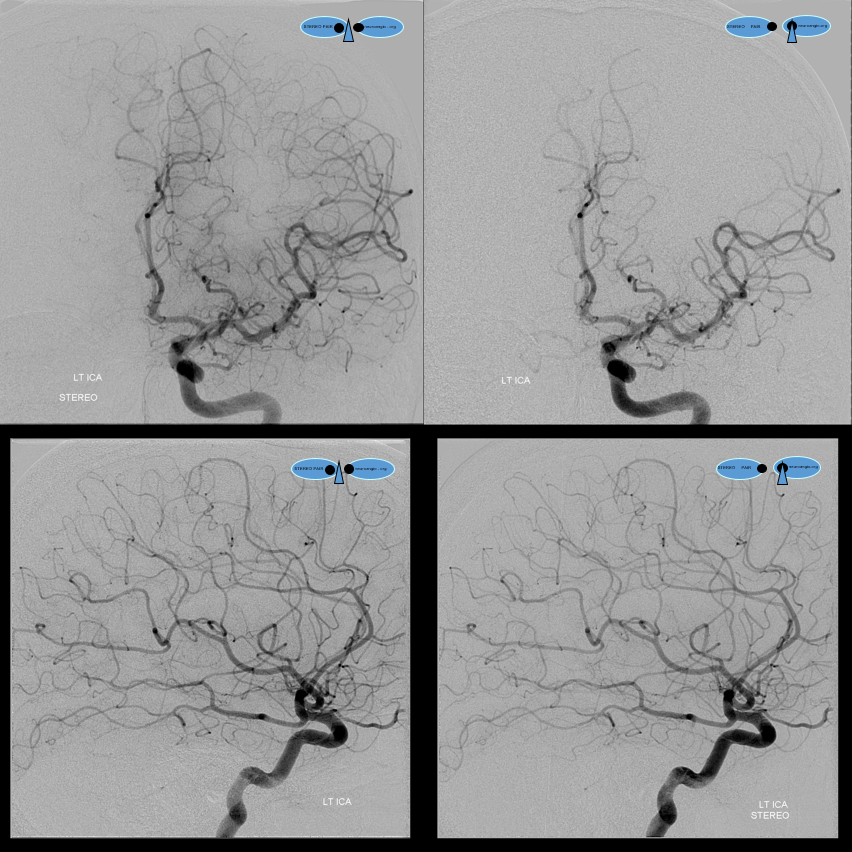 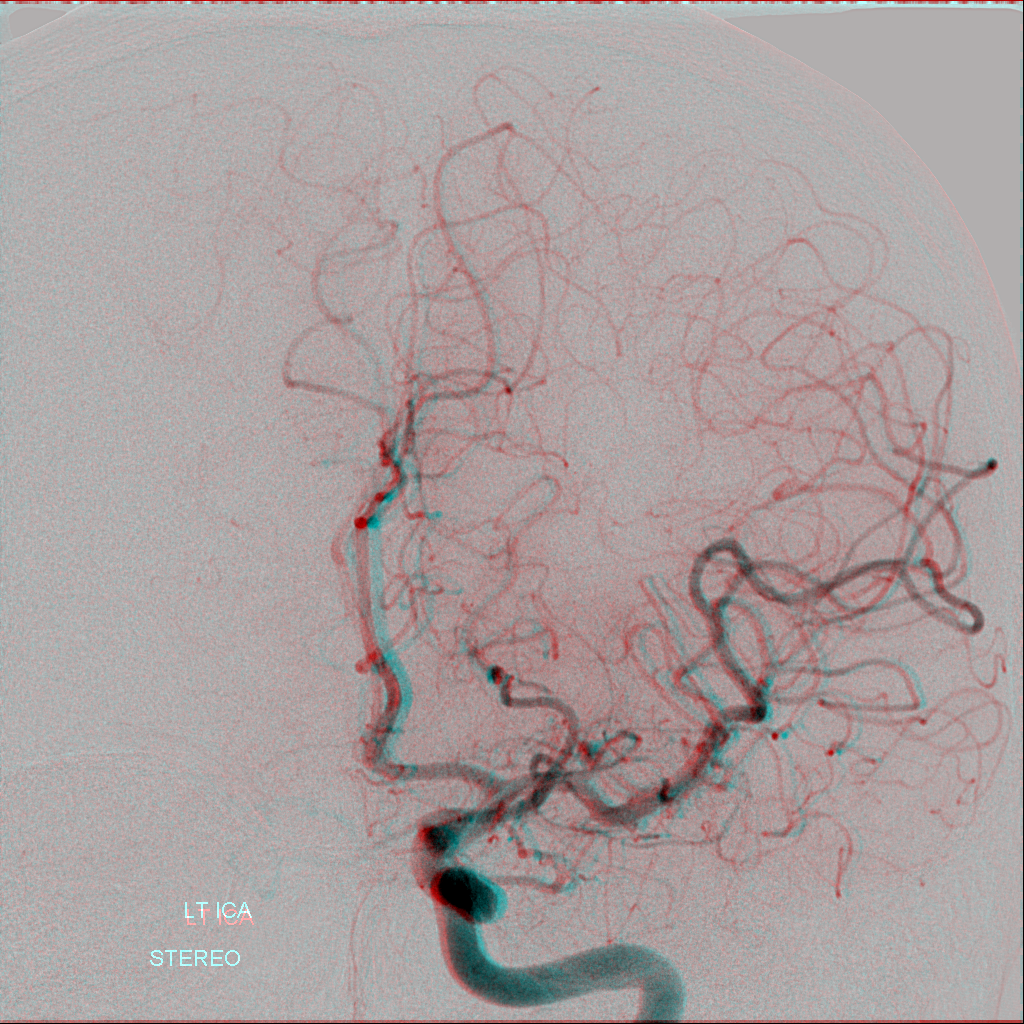 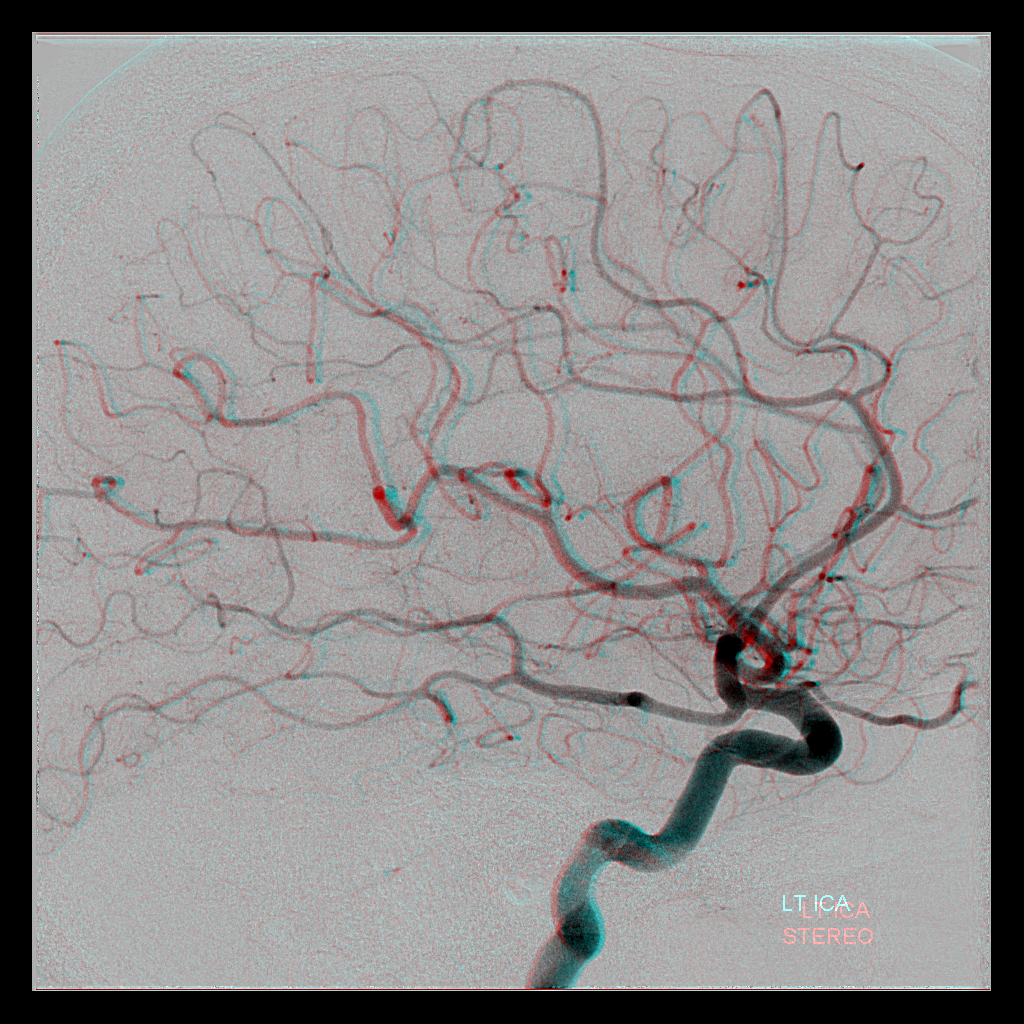 Again, 3-T MRA is very nice for small arteries like Heubner.  This is a very clear demonstration that Heubner and medial perforators off the MCA serve the same function.  In this patient, a large Heubner on the left serves the same function as the medial M1 perforators on the right, supplying the putamen, caudate, and parts of the anterior limb of the internal capsule. 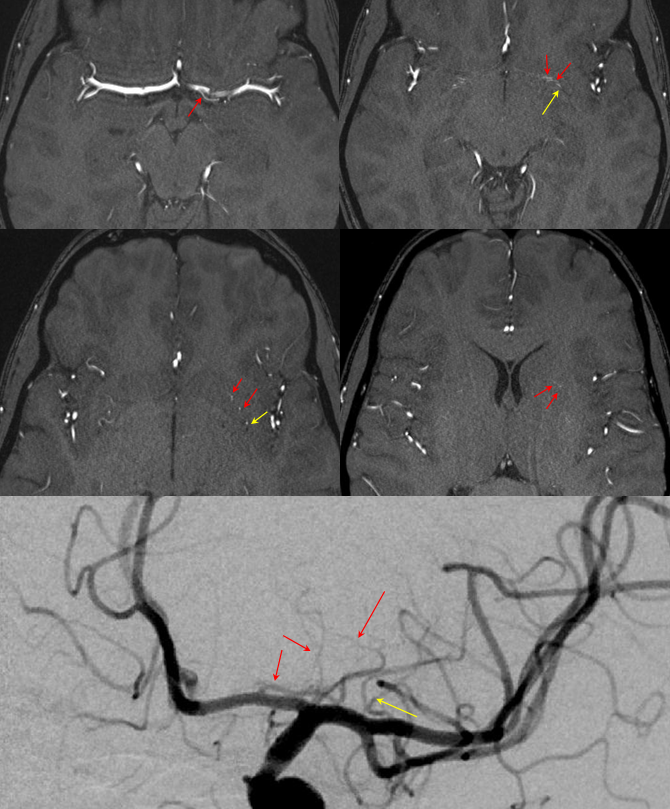 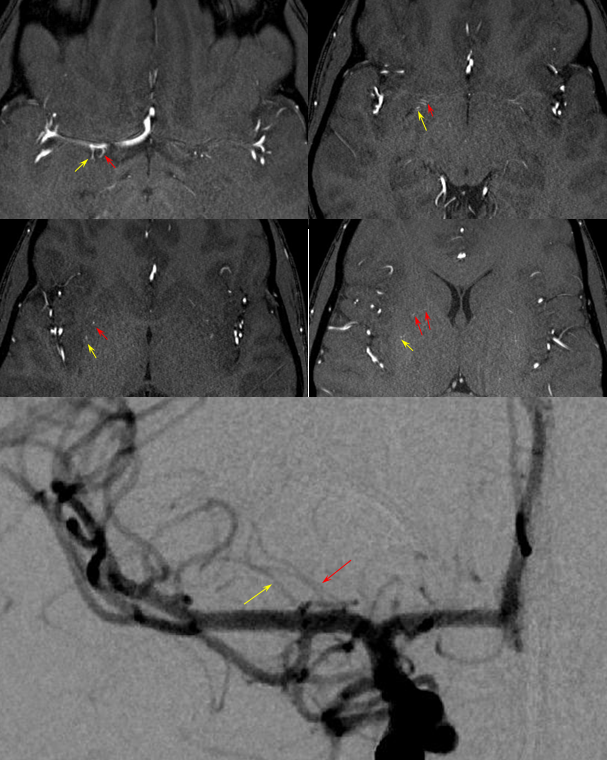 Lateral perforators coming off the M1 segment.
There can be one, two, three, nine visible M1 segment perforators, and yet more present at surgery than meets the angiographic eye.  A common trunk for many of these may be present — as in the above example with red arrows of the Heubner and yellow of the MCA.  The more laterally disposed perforatos typically have a “stretched” appearance originating medial to their eventual entry through the perforated substance, as most perpetrators come from the M1 segment, the shorter the segment the more laterally directed course the perforator may assume within the subarachnoid space before diving through the perforated substance.  Unless they happen to come off the M2, which happens occasionally (especially when the M1 is short, in which case lateral lenticulostriates tend to come from the superior division M2).  So, dealer’s choice — and it pays to get an angiogram before tumor resection in locations where perforator issues are important; MRI/A is at present of insufficient resolution for imaging the perforators, although 3T MRA can arguably settle the issue in some cases.
MCA branch nomenclature — vessels are named for the cortical territory they supply, regardless of divisional origin.  This nomenclature is adopted from P. Lasjaunias and A. Berenstein,  Surgical Neuro-angiography, in turn referencing a series of dissection by Michotey.

Accessory MCA
To restate the aforementioned, MCA arises as a dominant vessel from a number lateral striate perforators of the anterior cerebral artery in the reptile.  As such, a disposition may arise where two perforators remain dominant, thus resulting in the “accessory MCA” The accessory vessel is, in fact, either a hypertrophied Recurrent Artery of Heubner (RAH) – a medial ACA perforator, or another perforator-like vessel. To qualify as an MCA, the vessel must have cortical territory. In this cartoon, the schematic on the LEFT shows aMCA configuration where both branches (purple) appear to originate proximal to the A1 complex (which is here defined as segment past the more “distal” MCA branch.  These are known as Manelfe type 1 or 2 – depending on which branch is larger. The important feature however is to note from which vessel the perforators originate, and whether they are medial or lateral. The schematic on the RIGHT shows the Heubner-type aMCA, known as “Manelfe Type 3. 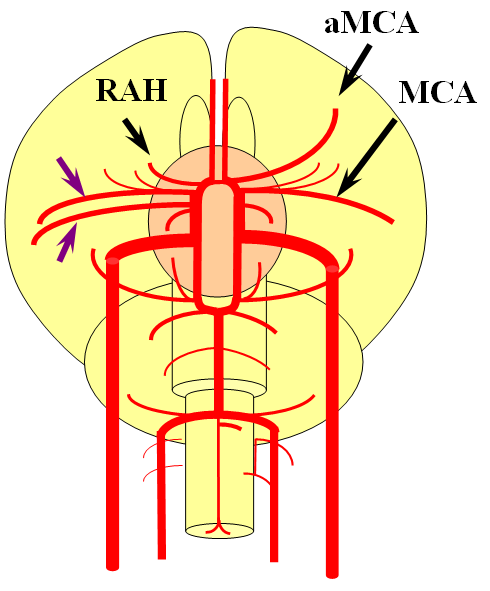 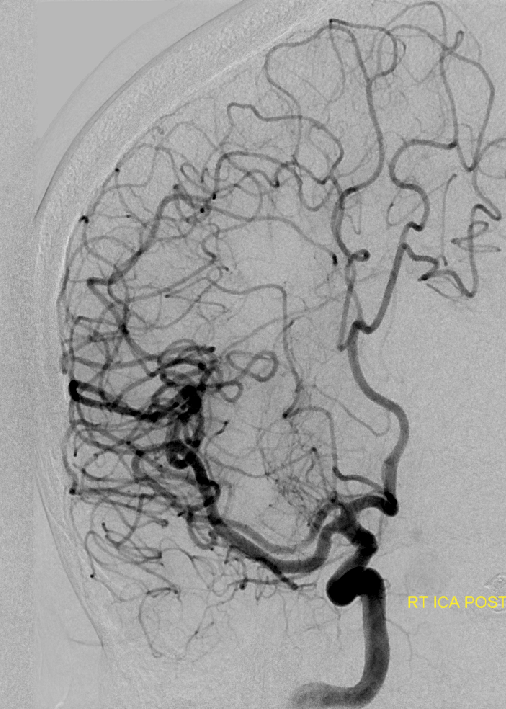 Catheter angiogram of the same patient.  Notice how well MCA perforators can be seen, originating from the smaller and more distal of the two MCA vessels.

Another accessory MCA.  The more proximal limb can be conceptulized as a large anterior temporal branch. 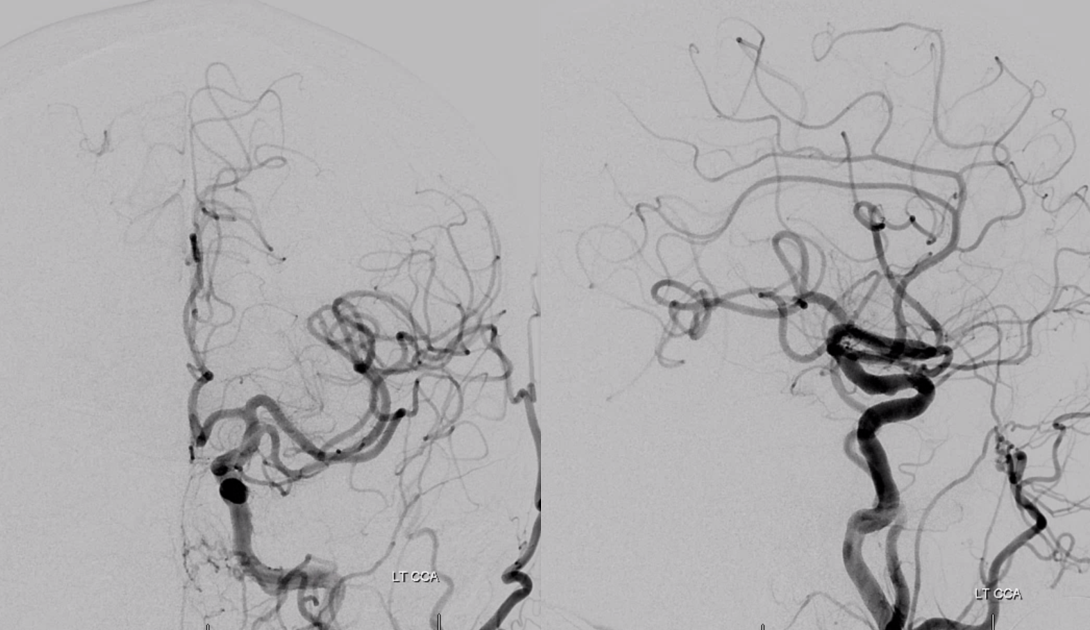 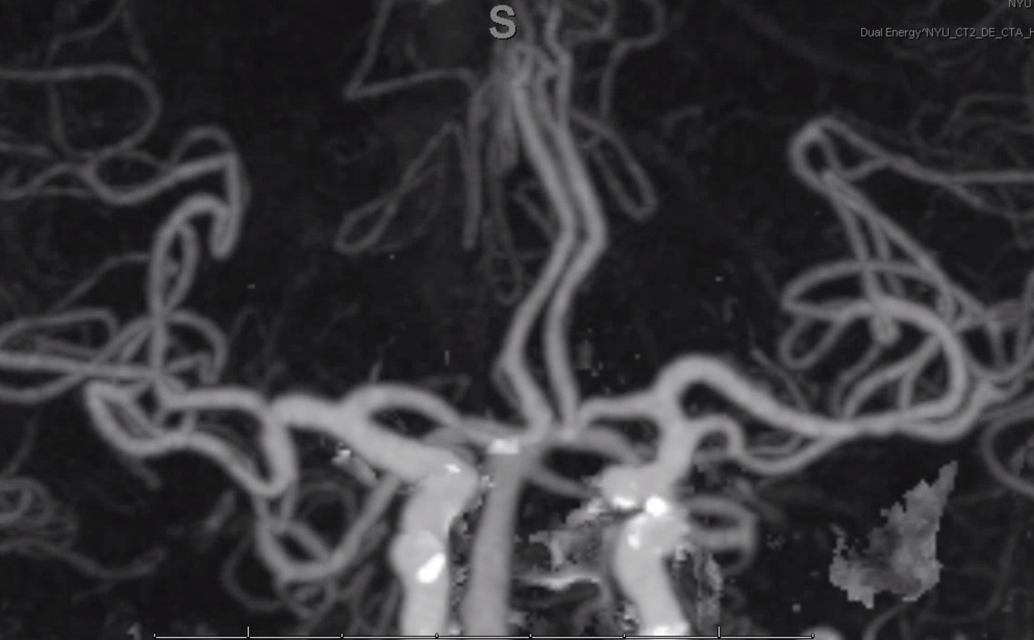 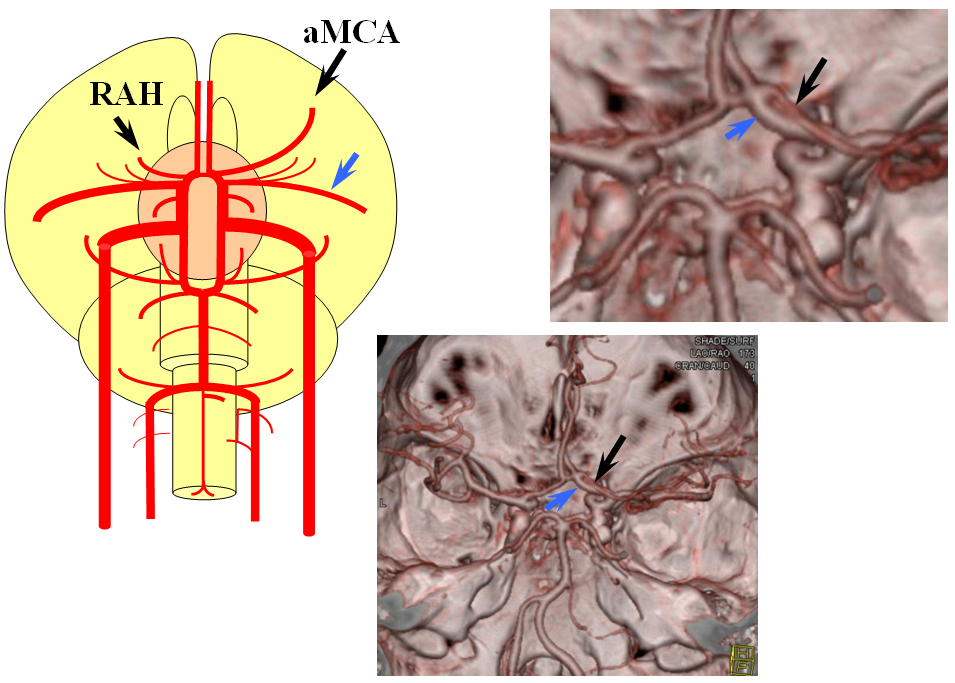 This series of images shows a prominent RAH, as a corollary to the aMCA case above. The bottom set of images (with the blue eyes) is a stereo pair. 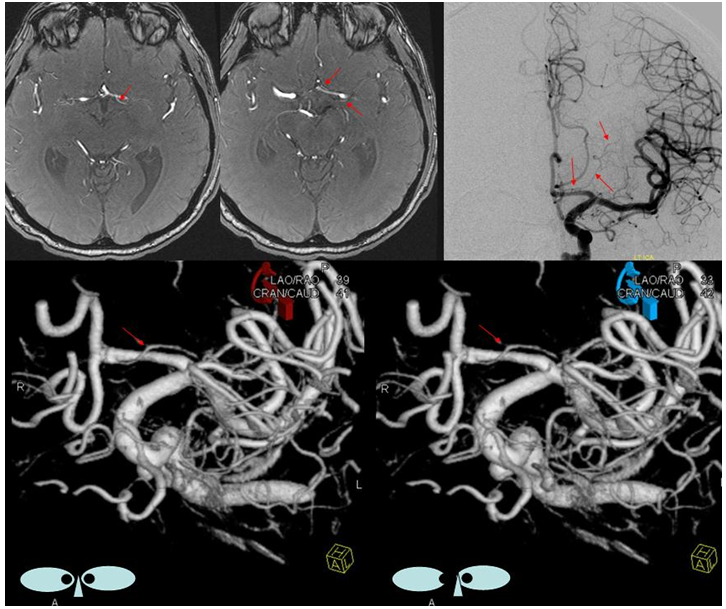 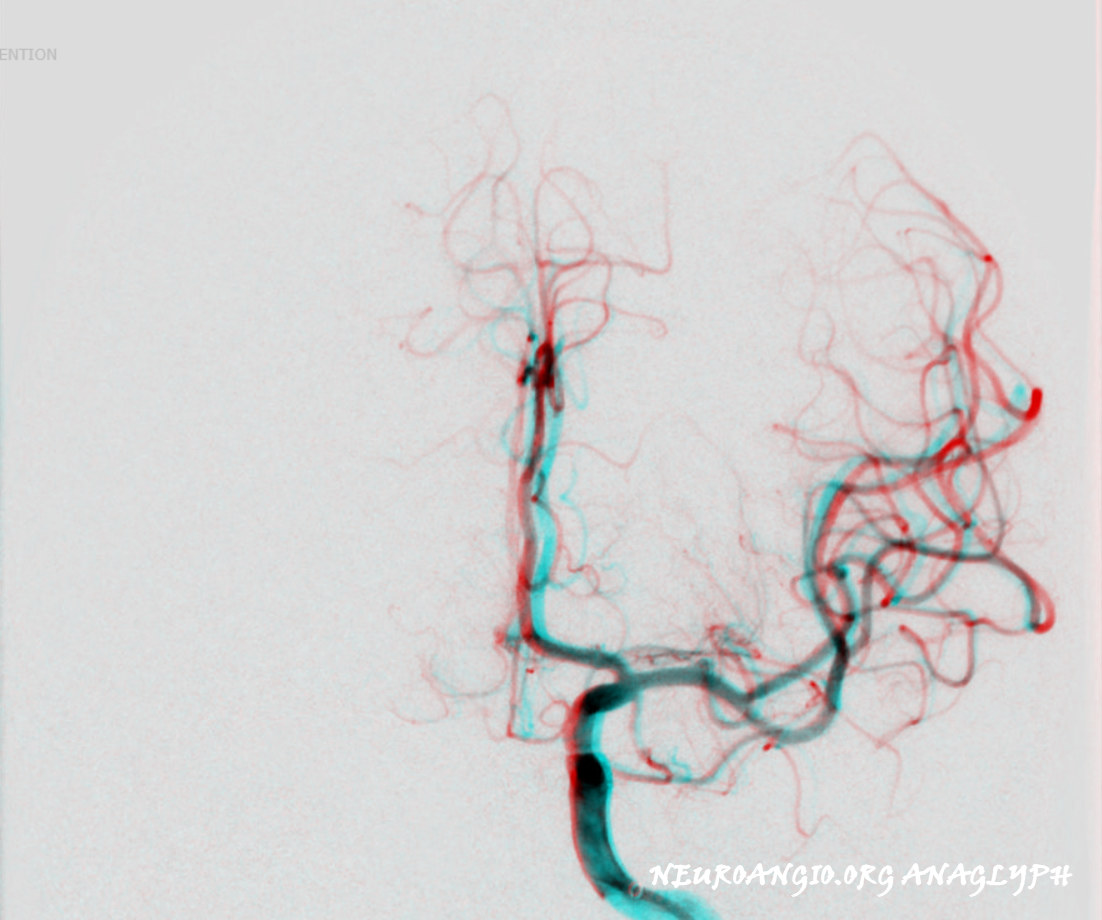 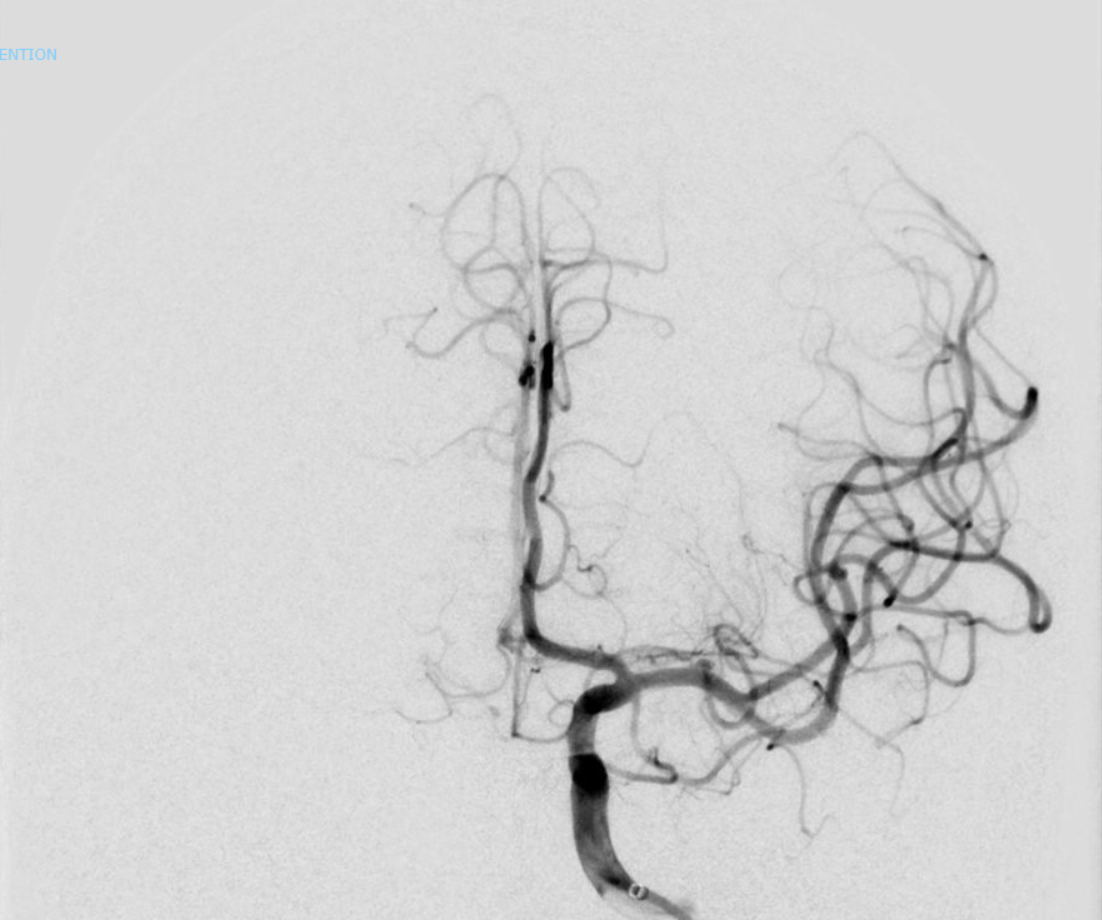 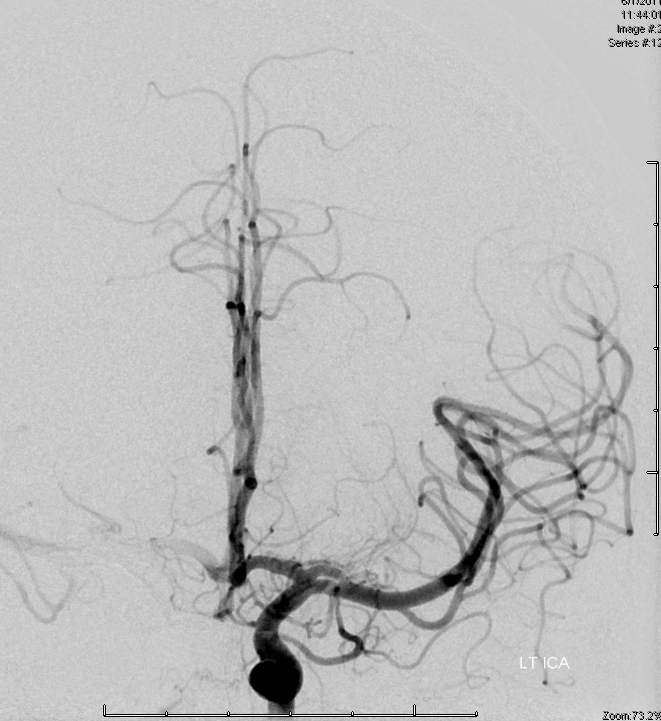