The possibility of false lumen being created by the dissection is more often discussed than encountered.  Here is an example of one such case.  See also Patient Information Arterial Dissection page 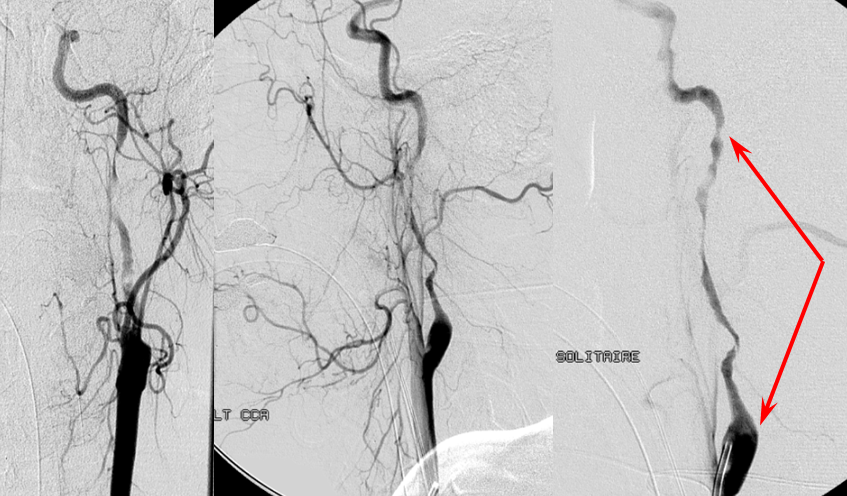 There is very little downside and much upside in quickly evaluating the state of collateral circulation to the left hemisphere. Take a few minutes to look around — chances are you will learn something very useful, which could save time later and lead to more informed treatment choices.  Injections of the right ICA and left vert show M1 occlusion from dissection-related embolus and collateral support to the left hemisphere via ACA (purple) and PCA parieto-occipital (yellow) collaterals. 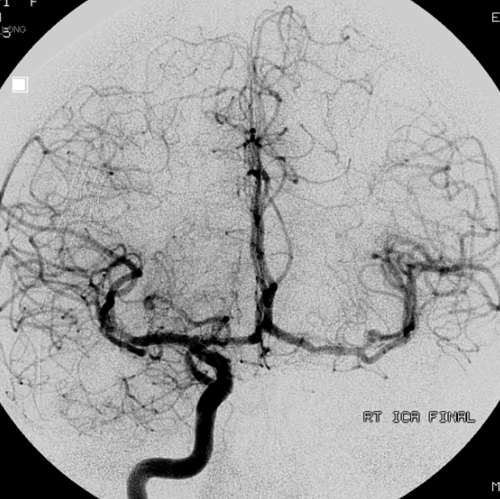 Now we have time to take a better look at the dissection. Notice the strange course of the proximal ICA (red), which in some ways is more irregular than the more distal cervical vessel.  This is not a typical ICA dissection, which occurs at the upper cervical segment, under the skull base.  The origin of this one is proximal, above the bulb, hence its irregular look.  The more typical, distal ICA demonstrates the expected undulating intraluminal hematoma (pink), while the lumen itself is free from irregularity (green).  There is also a somewhat strange segment projecting posteriorely (blue) from the proximal dissection, connecting with the more normal-appearing vessel (green). 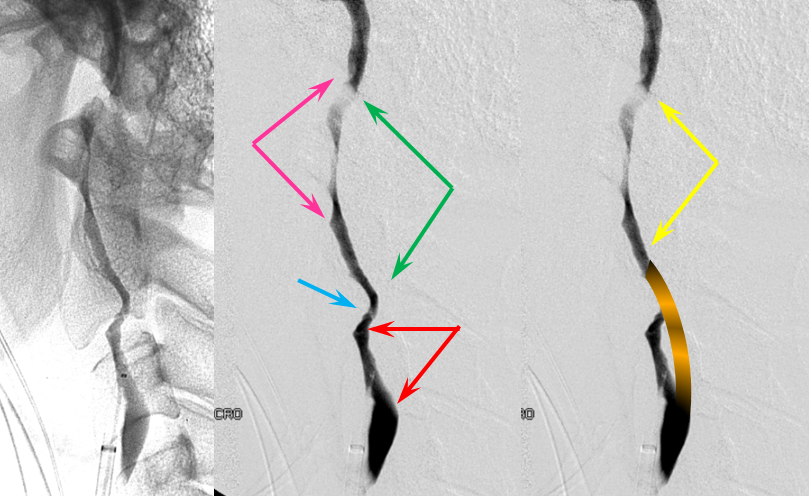 The same segments are noted in the frontal view 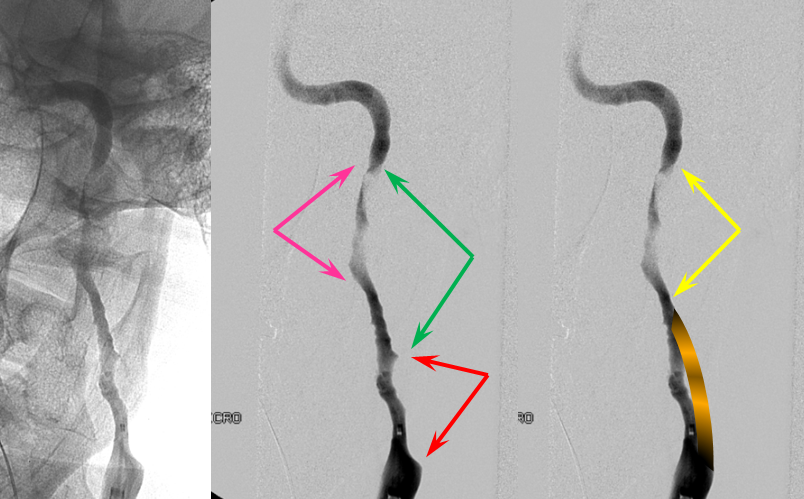 Now, in this perspective, the anatomy begins to make sense.  There is a false and a true lumen.  The proximal lumen (red and blue) are false, while the distal (green) is true.  The dissection has completely occluded the proximal parent lumen, and broken back through the intima to the normal vessel.

The proof of this comes from our attempt to preserve the vessel by stenting it.  Because of concern over enlarging the false lumen, and because we were not certain yet whether the above analysis was correct and, perhaps, this is true lumen all along, we chose to place a Pipeline stent (5×35), also good for stenting skull base carotid because of its superior flexibility and uniformity as compared with carotid and laser-cut intracranial stents.  Deployment of the Pipeline, with attendant manipulation of the guidecatheter, results in partial reopening of the true lumen, so that the image now looks like this.  Notice the Pipeline (black) which does not open well, with its proximal end in the false lumen.  The true lumen stump (pink) is now visible. 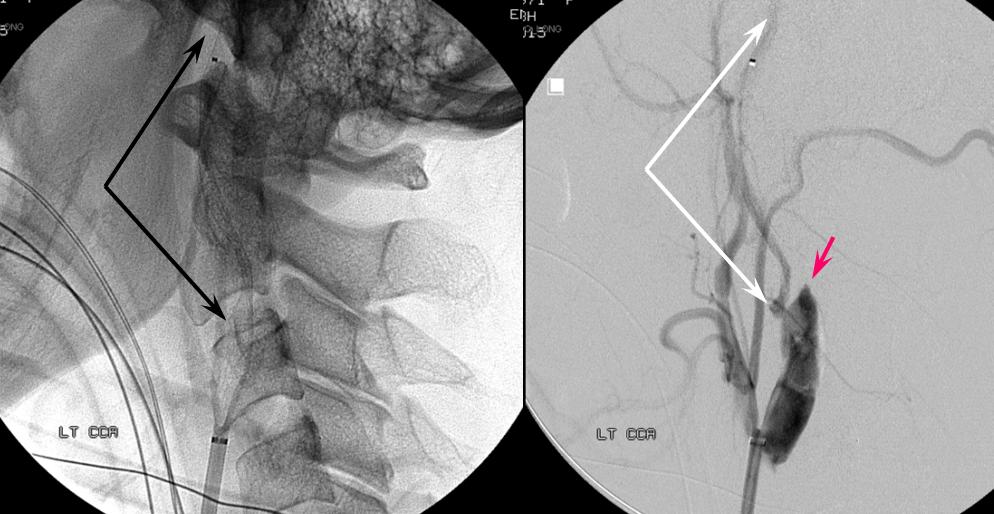 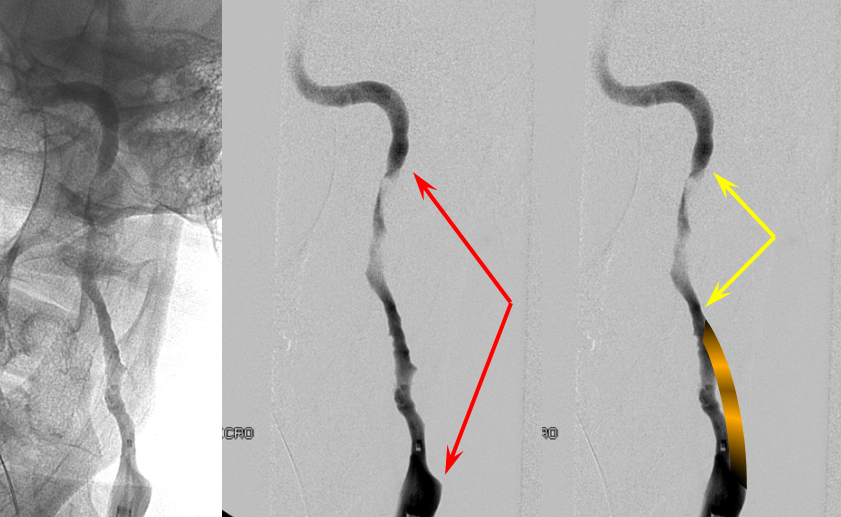 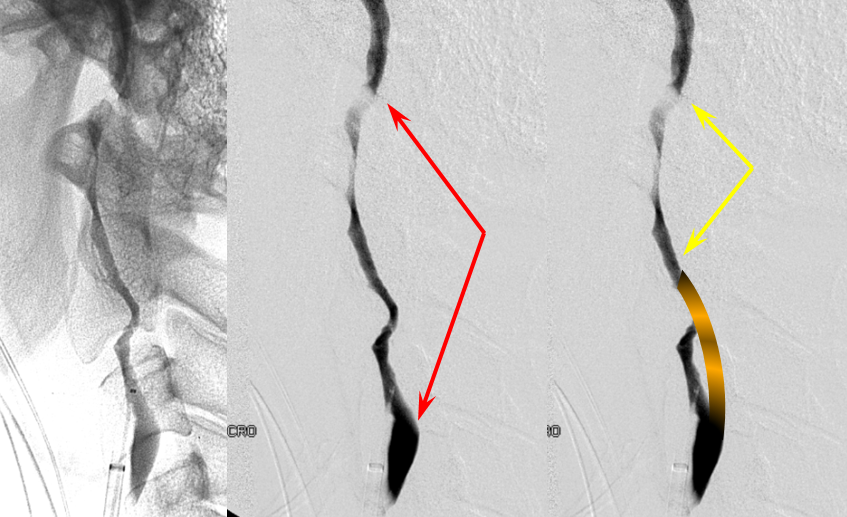