A patient with presumed OWR, with a large venolymphatic mass in the right chest wall (brown outline), and a separate arteriovenous malformation in the T3 pedicle/lamina (yellow arrows) and adjacent muscular tissues is sent for embolization of the AVM.  A large venous ecatic sac is seen (blue arrow) and a tributary vein (pink).  Note different magnetic characteristics of the AVM and venolymphatic masses, especially on T2. 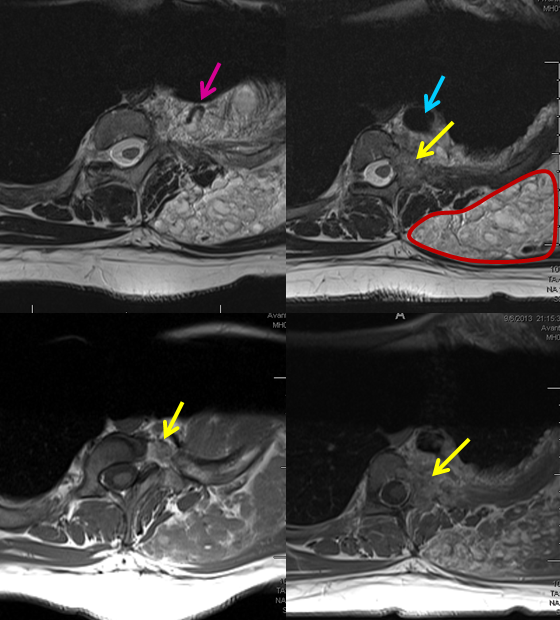 Angiographic images of the AVM, with injections of left T3 and T4 pedicles; the same venous sac in marked in blue.  No anterior spinal artery is seen.

A FULL pre-embolization spinal angiogram is done to identify all radiculomedullary contributors to the anterior spinal axis, and the ASA over the upper thoracic area is NOT seen.    Cervical radiculomedullary artery (white arrow, aka artery of Lazorthes) arises from the deep cervical artery, while the Adamkiewicz comes from the conjoined L2.  ASA = anterior spinal artery. 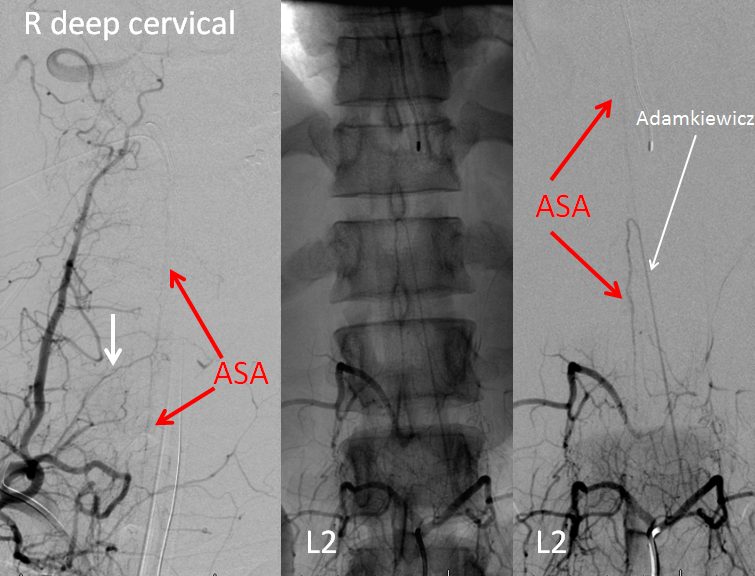 Embolization is carried out via three depositions of n-BCA into laterally-located pedicles to the AVM.  Dense nBCA cast is seen on the leftmost image.  A small amount of residual nidus is fed by the remaining medial pedicle.  But, now somethign else is visible — the ASA!  Why now?

The ASA was not initially seen because of extensive contrast sump through the AVM (akin to the “steal phenomenon”).  Once the majority of AVM is embolized, fortunately without n-BCA finding its way into the radiculomedullary artery, the ASA “emerges.”  It is my personal belief that using Onyx in this case may have led to the radiculomedullary artery “visualization” by Onyx casting, whereas n-BCA is less likely to permeate arterial-to-arterial anastomoses.  In either case, the outcome was rather fortunate.

Conclusion:  It is not enough to demonstrate that the ASA does not arise from the level of planned embolization.  A positive demonstration of regional ASA must be made from another level. Failure to visualize it should be taken as evidence that ASA in fact arises from the embolization target level, and may not be visible because of sump (AVMs) or hypervascularity (masses).

As though one case was not enough to showcase the potential disaster, we managed to produce another one.  This man was referred for pre-operative embolization of a hypervascular metastasis in the T3 body and pedicle. 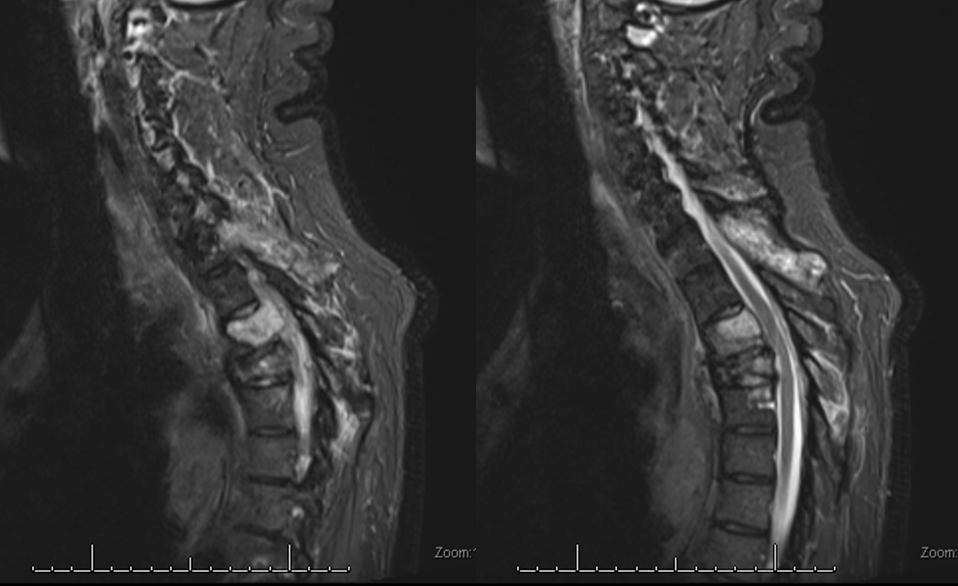 A radiculomedullary spinal artery was identified at left T7, and from the VB junction. The anterior spinal artery thus opacified was seen at the cervical and mid-thoracic levels (not shown).  The upper thoracic anterior spinal was felt to be seen from the left T7 segment, however that turned out to be a visual fakeout.  The tumor was supplied by the left supreme intercostal artery: 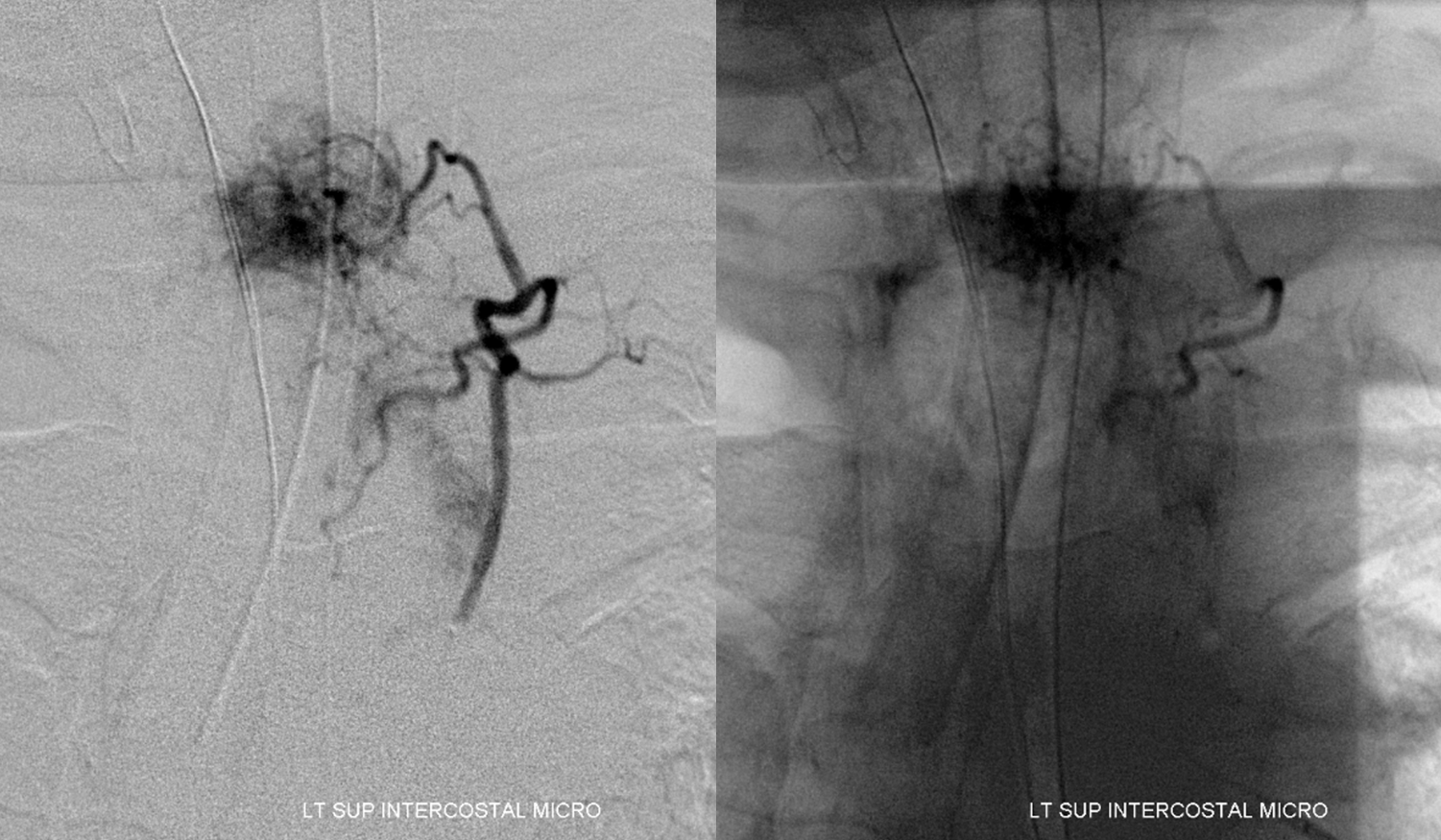 The tumor was duly embolized with particles and closing the pedicle with (thankfully) detachable soft coils (to slow down particle washout).  Here is a post-embolization angiogram: 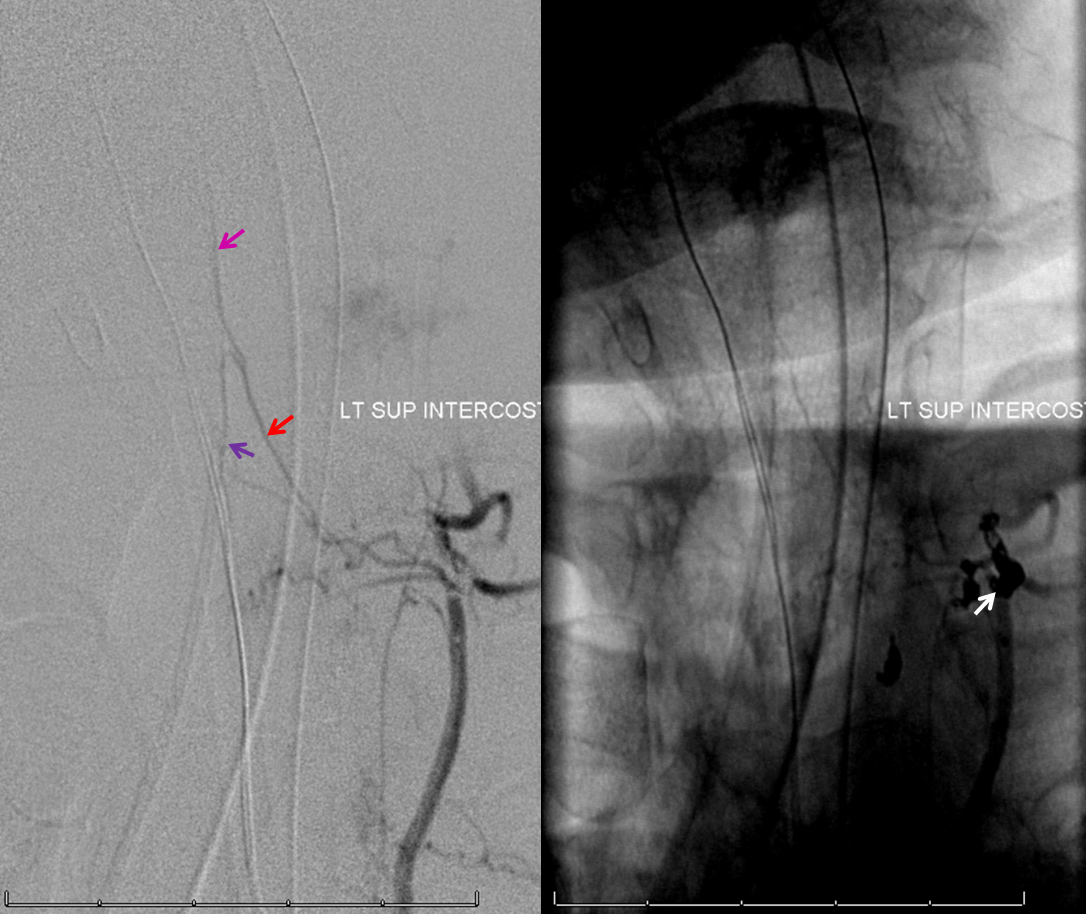 The frightfully large radiculomedullary artery (red), with its superior (pink) and inferior (purple) anterior spinal artery limbs, was completely missing on the pre-embolization injection.  Why?  The answer is the same as in Case 1 — the flow in the radiculomedullary, despite its size, was only a small fraction of the total flow due to the hypervascular nature of the tumor, probably somewhere on the order of 5% of total flow.  Thankfully, the majority of embolization was carried out with the microcatheter distal to radiculomedullary origin, in line with our practice of as complete an embolization as possible.  Proximal deposition of particles would likely have resulted in clinically significant anterior spinal artery embolization.  Nevertheless, the coils are seen protruding into the priximal radiculomedullary branch (white arrow).

About 20 minutes later, the radiculomedullary artery is closed: 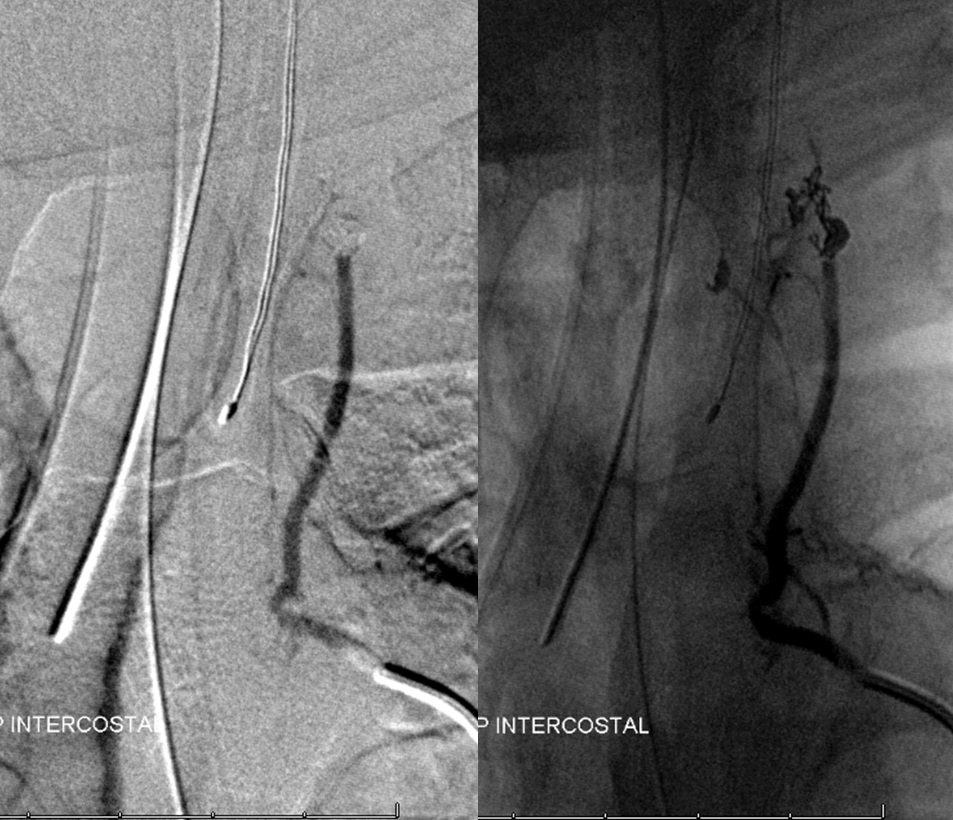 Angiography of left T7 segmental artery and vertebral artery show no adequate collateral reconstitution of the area.  The coils must be removed, and through some persistent and skillful manipulation of snares, alligator, and buddy wire by Dr. Peter Kim Nelson, they are finally retrieved. 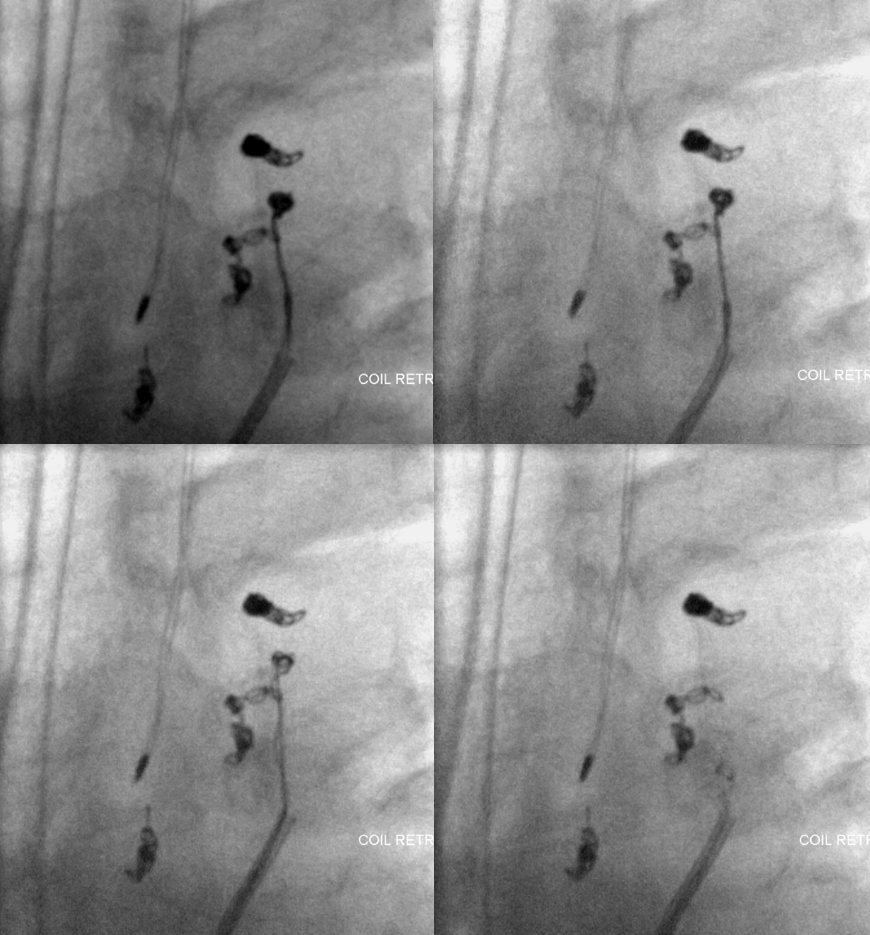 A Trascend-14 wire is then placed into the radiculomedullary artery to push the thrombus off to the side of the vessel.  The post-salvage angiogram demonstrates re-establishment of left supreme intercostal radiculomedullary patency: 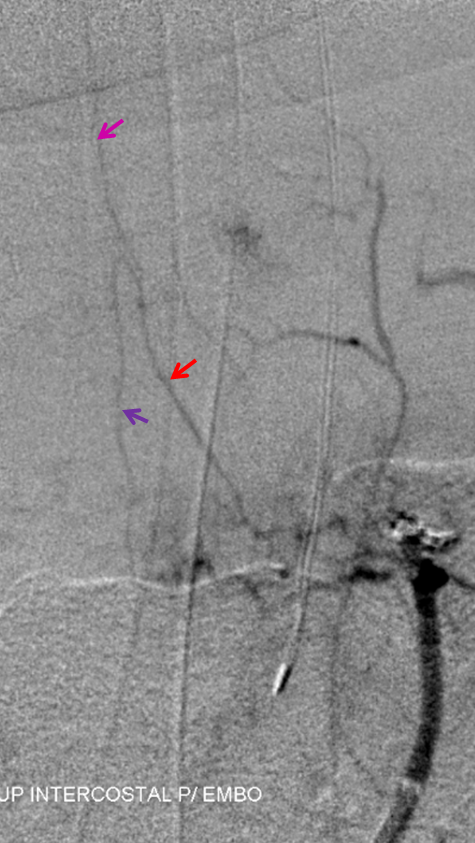 This is no guarantee that no damage is sustained, of course. The patient awoke completely intact, which is as much luck as skill, to my take.

Conclusion:  ALWAYS make sure to demonstrate anterior spinal artery at the level of embolization when hypervascular lesions are the target.  If that cannot be done, one must assume that the radiculomedullary contribution is coming from the pedicle to be embolized, and cannot be visualized because of flow competition.  In other words, it is not enough to show that the pedicle to be embolized apparently does “not” supply the radiculomedullary artery — it very well may, you simply can’ see it — not yet.